Russia and Vietnam are negiotating about a contract of a upgraded version of TT-400TP gunboat. 8 gunboat is expected to finished till 2020.

Detail info about the new warships is classified, but some people expected them to have stronger weapons than the original TT-400TP and may have anti-ship missiles. 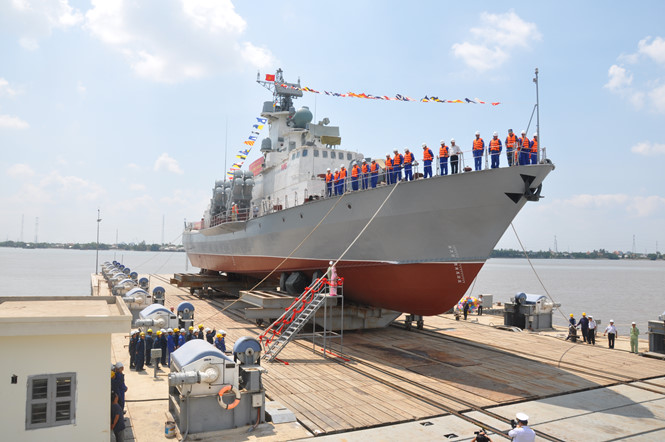 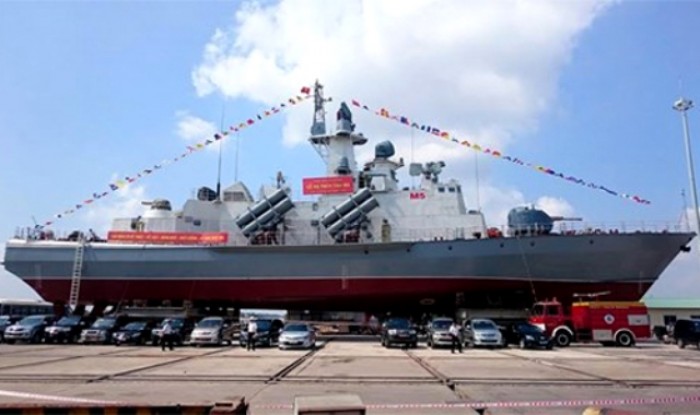 "The two countries are talking about the building of the fifth and sixth Gepard-3.9 frigates for the VPN in Zelenodolsk, according to vietnamnet.vn.

Previously on May 26, the fourth of its kind was launched at a ceremony in the Zelenodolsk shipyard.

Having a displacement of approximately 2,000 tonnes, the Gepard-3.9 is able to operate for 45 days at sea and travel up to 5,000 nautical miles (9,000km). It can also be used for non-military purposes, such as search and rescue, fighting pirates and illegal fishing activities, and assisting vessels in distress."

Is it a license variant or reverse engineering?
higurashihougi

Russia's 21300C "Dolphin" search and rescue ship has interested the Vietnamese military because it boasts a range of capabilities not found in its foreign counterparts, the ship's head constructor Alexander Forst told Sputnik.

Vietnamese Navy exercise to seize the islands in the Spratly archipelago 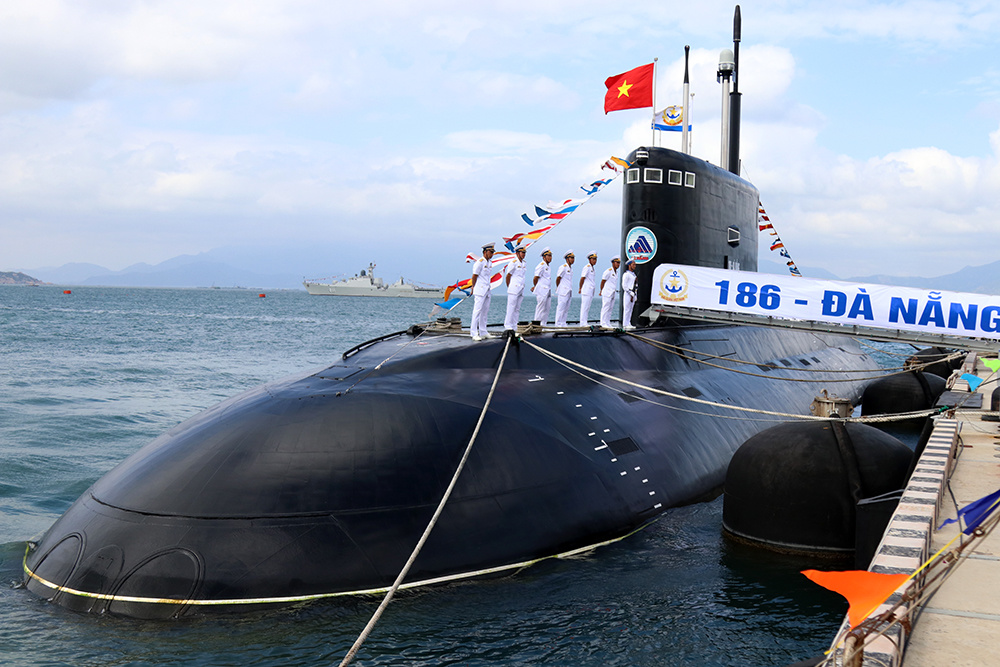 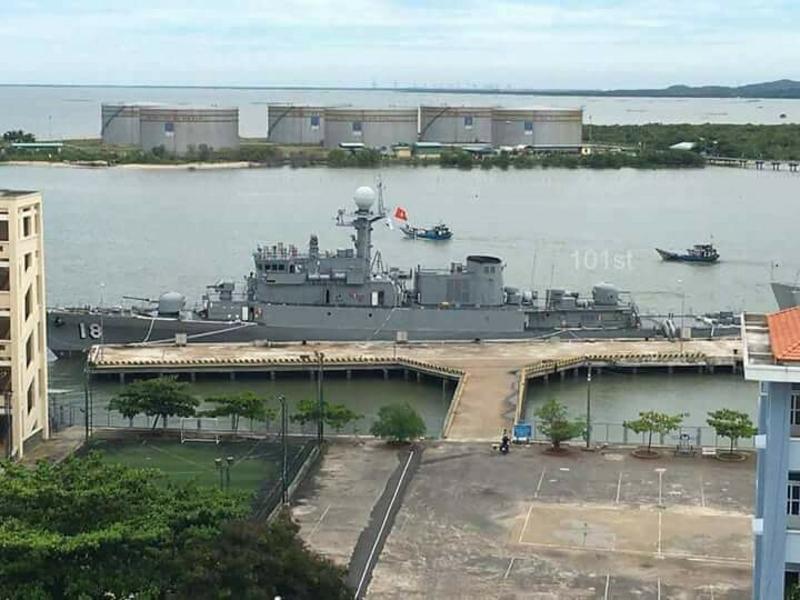 According to Vietnamese media, on October 9, 2017, the Vietnamese Navy built Ba Son Limited (a joint venture of the Defense Ministry's Main Directorate of Defense Industry with the Norwegian group Ulrik Qvale & Partners AS) in the Vietnamese Navy, in Ho Chi Minh City, two of the next constructed for large missile boats Project 12418 (code "Molniya") with the aircraft numbers "382" and "383" (construction numbers M5 and M6 respectively). The boats entered the 167th Naval Brigade of the 2nd Naval District of the Vietnamese Navy (based at the naval base of Nyenchi in the southern province of Dongnai).

Data of the boats started by the Ba Son Limited assembly at the end of 2013 were launched on April 14 and 15, 2016, however, the delivery of the boats for unknown reasons dragged on for almost a year (originally scheduled for delivery by the end of 2016).

These are the last two (fifth and sixth) boats built on Ba Son Limited as part of the contract for the organization in Vietnam of the construction of the 12418 missile boats equipped with the 3K24E anti-ship missile system Uran-E, concluded with Rosoboronexport in 2006. The contract included delivery to Vietnam of two launches of Project 12418 completely ready (under the agreement of another year 2003), as well as the construction of six more such boats in Vietnam with Russian assistance. The option to the contract included another four launches of Project 12418, and was transferred to a firm contract in April 2015. The total value of the agreement reaches almost $ 1 billion.

The main contractor from the Russian side is JSC Shipbuilding Plant Vympel, which built two complete boats of the 12418 project, delivered by the Vietnamese Navy in 2007 (the current Vietnamese aircraft numbers 375 and 376), and also carried out in 2010-2015 the supply to Vietnam of hull sections, components and structures for the licensed construction of this type of boats.The construction of boats in Vietnam is conducted with technical supervision of construction by Vympel, as well as the developer company - Central Marine Design Bureau "Almaz" from St. Petersburg.

Construction of the second pair of missile boats HQ-379 and HQ-380 (now just "379" and "380") with construction numbers M3 and M4 was launched at Ba Son Limited in 2012, and their launch in high availability was produced there on June 24, 2014. Receiving certificates for both boats were signed on April 20, 2015, and on June 2, 2015, both boats were formally entered into the Navy of Vietnam, entering the same 167th naval brigade.

As it was mentioned earlier, works on providing licensed construction in Vietnam of a series of missile boats of Project 12418 under the contract of 2006 gave the main load to the Rybinsk Shipyard "Vympel" in the last few years (in 2014, these works accounted for more than 75% products of the enterprise).

According to Vietnamese sources, on September 15, 2017 in Ho Chi Minh, the Vietnamese shipyard-repair shipyard X51 (Hai Minh Shipbuilding and Repairing Company, subordinated to the Defense Industry Directorate of the Ministry of Defense of the SRV) carried out the delivery of the FC624 head patrol and rescue vessel of Vietnam (construction number FC624-01, onboard number "924"). The FC624 project of the vessel was developed by the St. Petersburg branch of JSC MTD Marine Technologies Development Limited. The vessel became part of the 125th Naval Brigade of the 2nd Naval District of the Vietnamese Navy. 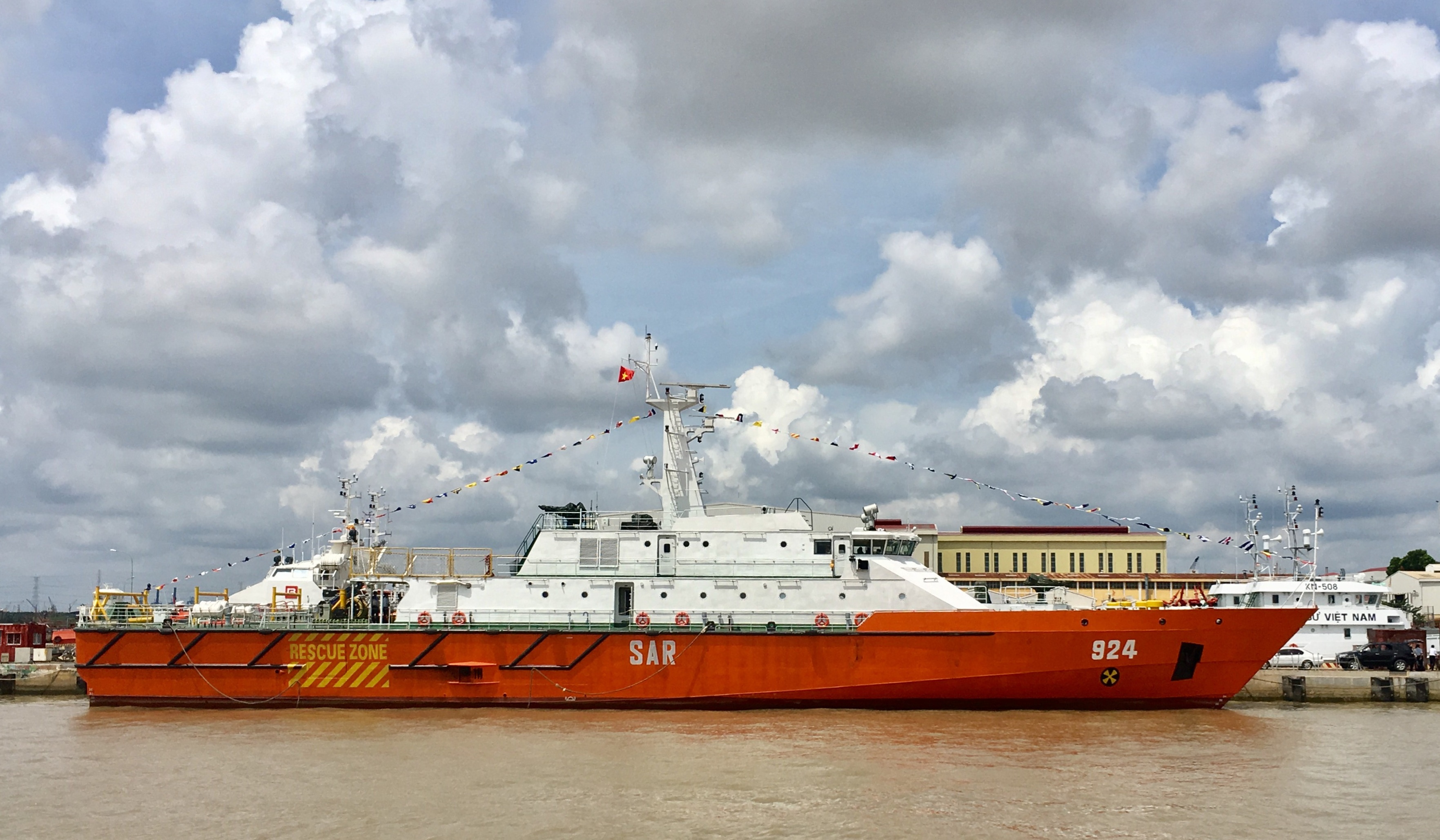 The vessel was built by the company X51 under the contract with the Vietnamese Navy. The launch was made on June 16, 2015, one delivery was made only in September 2017. It is planned to build a series of units of this project.

The patrol and rescue vessel FC624 has a total displacement of more than 700 tons, a length of 63.1 meters, a width of 11.9 meters, a draft of 3.4 meters. A two-shaft main power plant consisting of two German MTU diesel engines with a total capacity of 10,500 horsepower. provides a speed of up to 25 knots. The range of navigation with the economic course is 4200 miles, autonomy is 15 days.

The vessel FC624 is capable of operating in waves up to 8-9 points and wind strength of up to 12 on the Beaufort scale. The vessel is equipped with communication equipment that complies with the international standard GMDSS A3, has a quick-release rescue boat in the stern and a landing site for a light helicopter. The vessel is capable of accommodating 120 rescuers and is equipped with a medical unit. As a weapon, one small-caliber artillery installation was installed on the ship.

Launch of the Club-S rocket from the Vietnamese submarine

On December 22, 2017, the first VTV1 channel of Vietnamese state television showed a report about the first launch of the Club-S anti-ship missile 3M54E (an export version of the Caliber-PL complex) with one of the new large diesel-electric submarines of Project 06361 of the Vietnamese Navy. 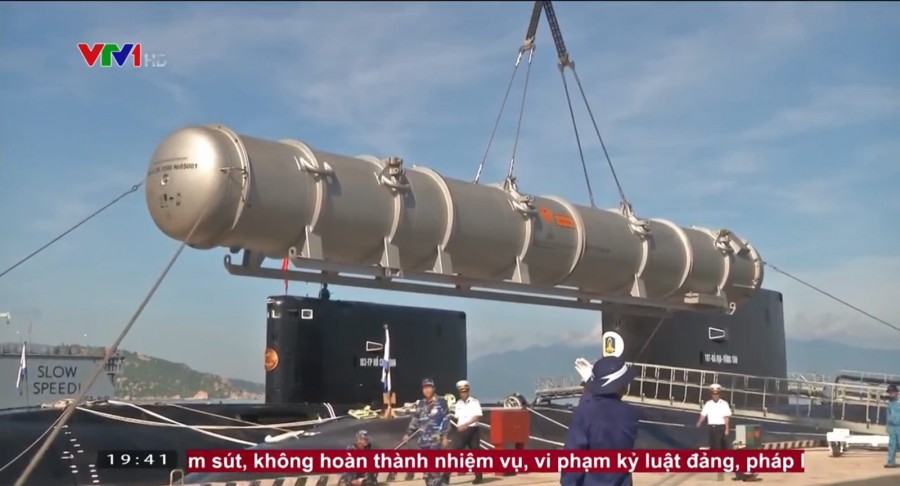 Transport container with anti-ship missile 3M54E of the Club-S complex, which is in service with large diesel-electric submarines of project 06361 Vietnam Navy, December 2017 (c) VTV1

The Vietnamese fleet received in 2014-2017 six large diesel-electric submarines of project 06361, built by Admiralteyskie Verfi in St. Petersburg under a contract concluded by the Vietnamese side with the FSUE Rosoboronexport on December 15, 2009. The cost of building boats was more than $ 2 billion, and taking into account the construction of infrastructure facilities, supplies of weapons and other things, the total cost of work under this agreement is $ 4 billion.

Among the submarines of Project 06361, Vietnam launched missile launched from the torpedo tubes of the Club-S complex, including both 3M54E anti-ship missiles, and, according to some reports, 3M14E cruise missiles for engaging ground targets. 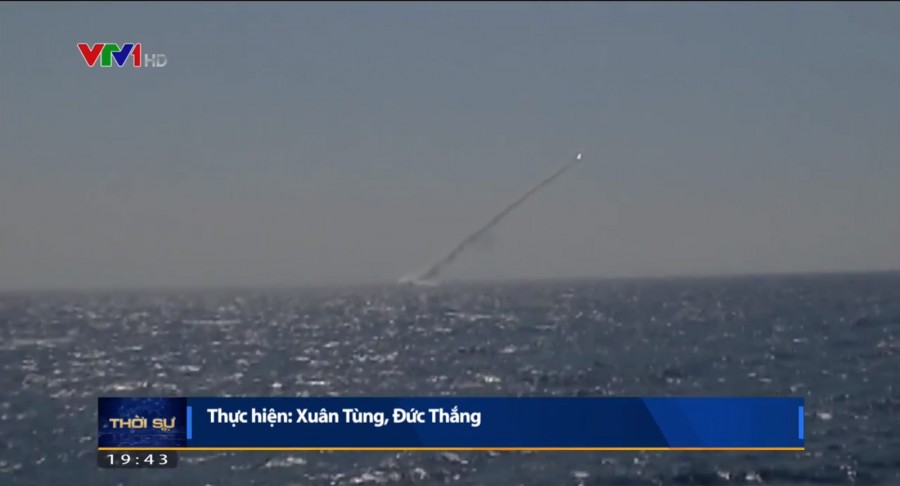 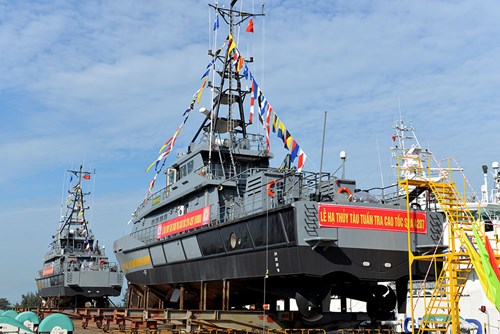 The second pair of frigates of the project "Gepard-3.9" was introduced into the Navy of Vietnam

February 6, 2018 in Cam Ranh (Vietnam), the ceremony of putting into the Navy of the Vietnamese People's Army two built in Russia at JSC Zelenodolsky Plant named after A.M. Gorky "light frigate project 11661E second series (code" Gepard-3.9 "PLO) with reinforced anti-submarine weapons, received Vietnamese names Tran Hung Dao (on-board number" 015 ", serial number 956) and Quang Trung (on-board number" 016 ", factory number 957). On ships the solemn lifting of the naval flag of the Vietnamese Navy took place. The first of the ships is named after the 13th-century Vietnamese commander Chiang Heng Dao, who organized the successful defense of the country during the third Mongol invasion of Daiviet in 1287-1288; The second frigate is named after Nguyen Hue - the second emperor of the Vietnamese Taishon dynasty, who ruled in 1788-1792 and waged successful wars for the unification of the country. Both frigates were included in the 162nd Marine Brigade of the 4th Naval District of the Vietnamese Navy. 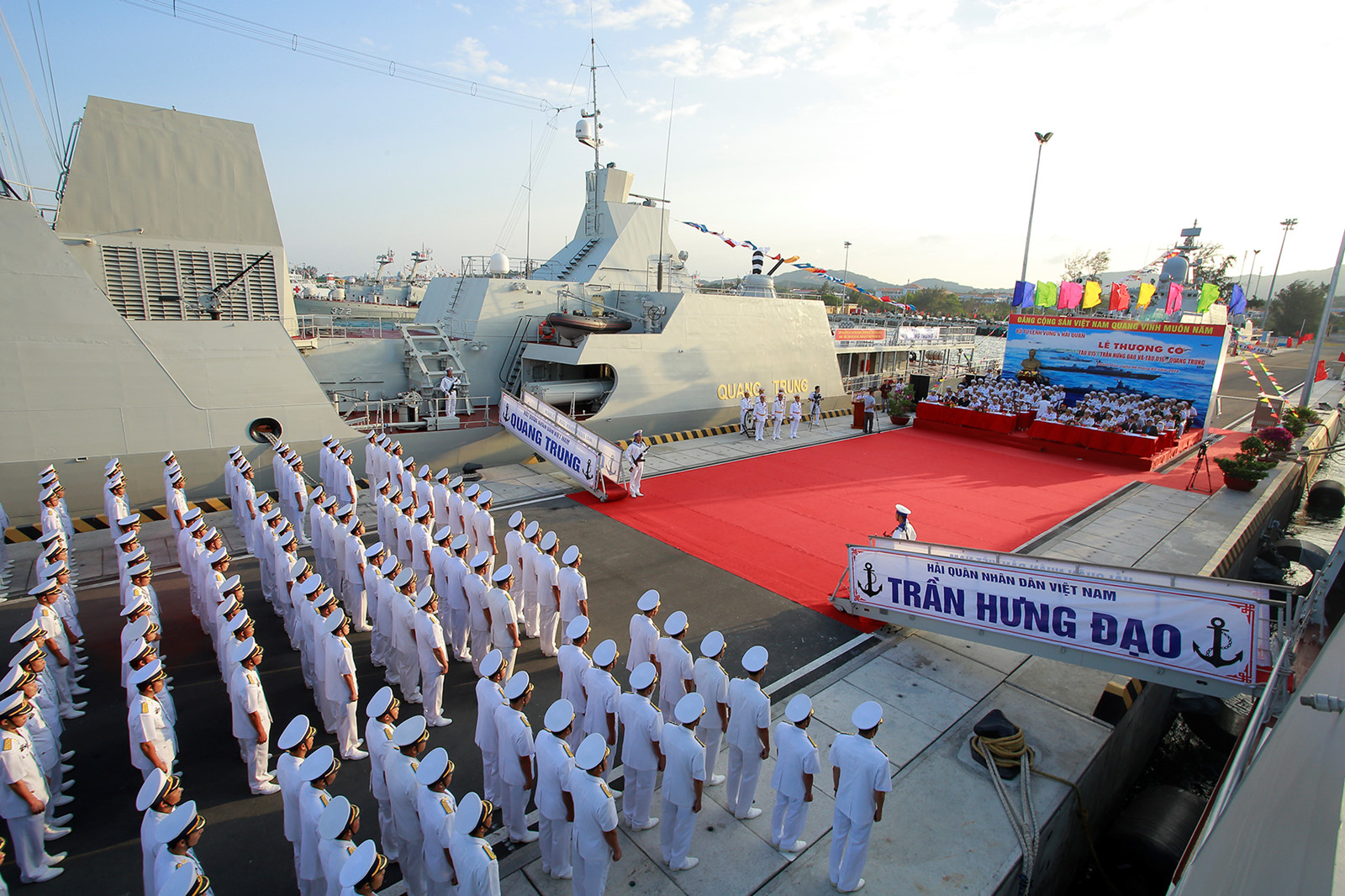 An intergovernmental contract worth about $ 700 million to build two additional frigates for modified project 11661E ("Gepard-3.9" PLO) for Vietnam was signed on October 17, 2012 by Rosoboronexport. On February 15, 2013, the State Contract No. Р / 170412131755-1233287 was concluded between JSC Zelenodolsky Plant named after A.M. Gorky "and JSC" Rosoboronexport "for the construction of the two mentioned frigates (factory numbers 956 and 957). On May 14, 2013, after the transfer of the advance payment by the Vietnamese party, the State contract entered into force. The solemn laying of two frigates was made in Zelenodolsk on September 24, 2013.

According to the State contract, the ship with the serial number 956 was to be delivered in November 2016, and with the factory number 957 - in March 2017. Acts of transfer of frigates in Vietnam were to be signed, respectively, in February and June 2017.
However, in view of the political problems that arose with the delivery of the main gas turbine units M44E with the ZPPG Zorya-Mashproekt (Nikolaev, Ukraine), which were permitted only in 2015, JSC Zelenodolsky Plant named after AMGorky was forced to implement a revised schedule for the construction of ships with taking into account the delay in the delivery of the GDTA M44E. The head frigate of this series with the serial number 956 was launched in Zelenodolsk on April 27, 2016, and the second with the serial number 957 - launched on May 26, 2016. In September and October 2016, both ships were transferred via inland waterways from Zelenodolsk to Novorossiysk, where since December 2016 they were tested and trained Vietnamese crews. 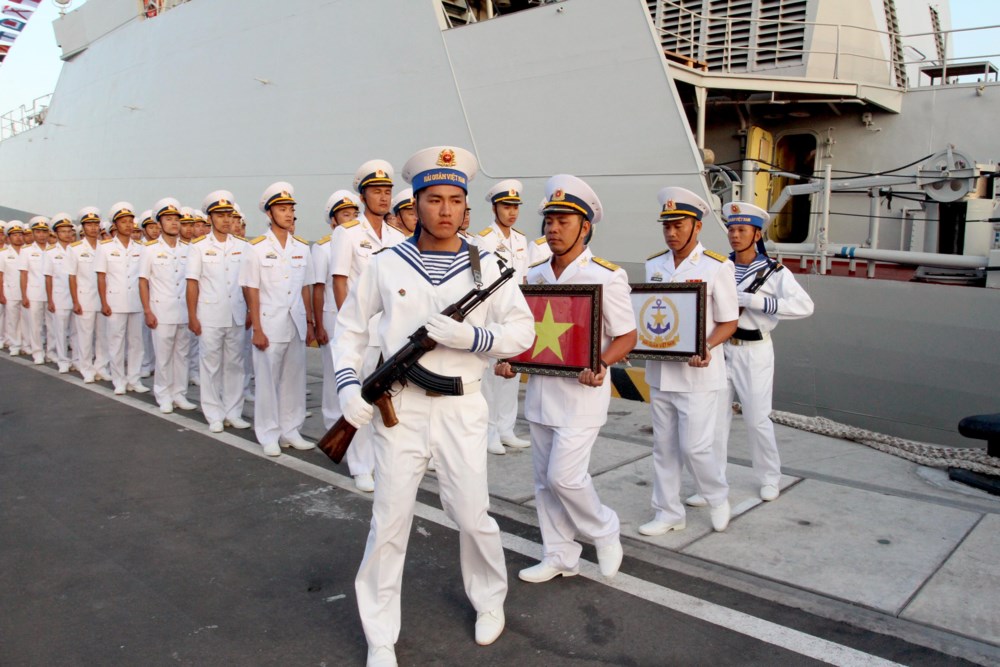 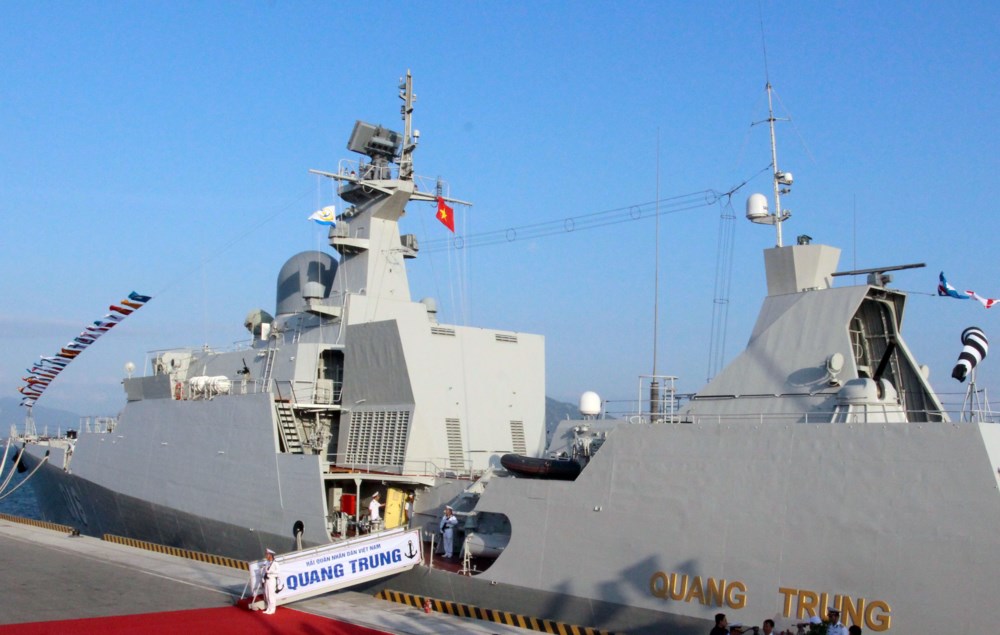 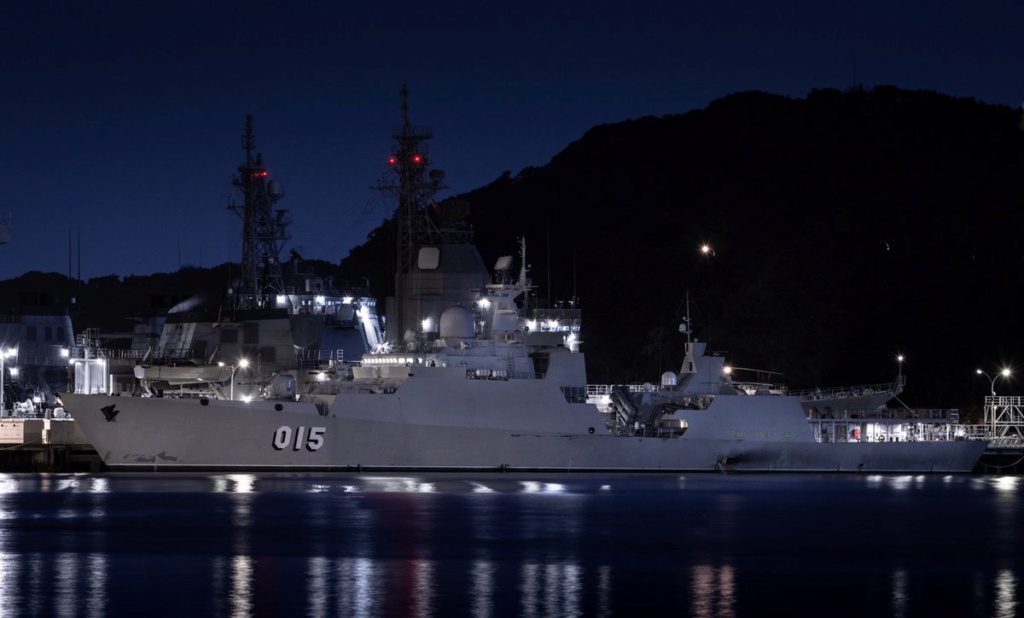 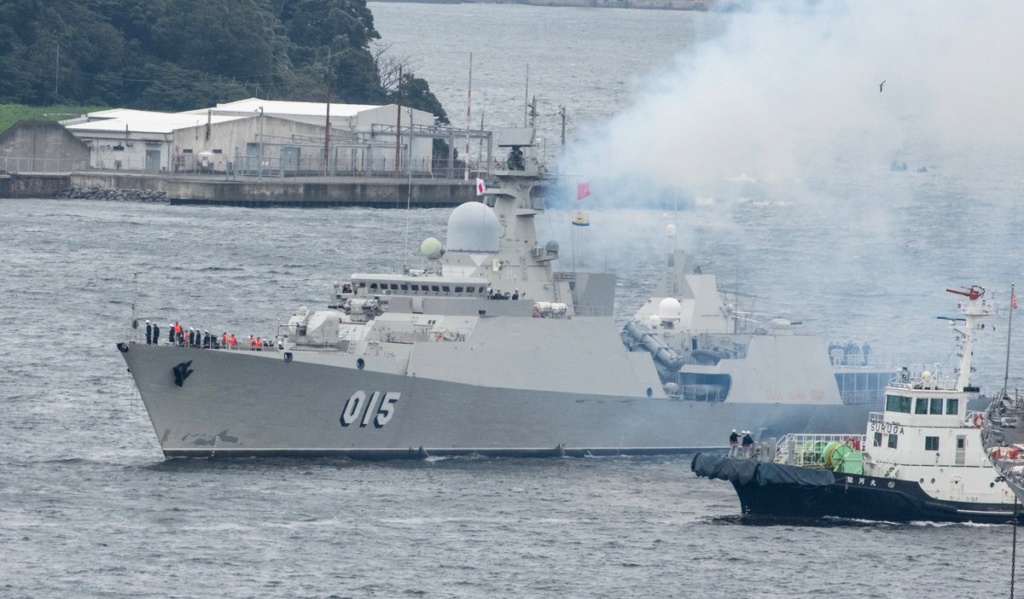 Trần Hưng Đạo is a military genius in Vietnamese history, who lead the successful patriotic war against Mongol invasions in 1285 and 1288.

Trần Hưng Đạo's victory in 1285 was very important for Japan's independence, because Mongol Empire have to halt his Japan campaign to prepare for a revenge in 1288 against Vietnam, which also ended in failure.

That is why when Imperial Japan occupied Vietnam in 1945, they did not dare to vandalize Trần Hưng Đạo's temple, because thanks to Trần Hưng Đạo, Japan escaped the military might of the Mongols. 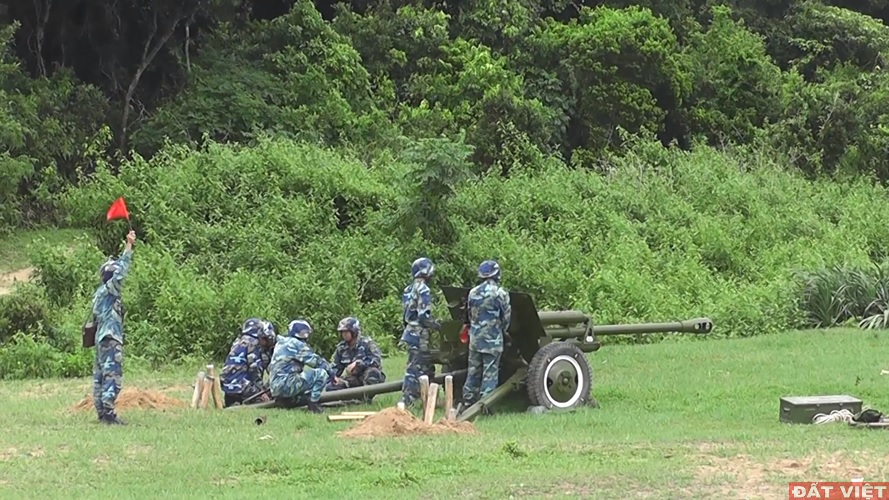 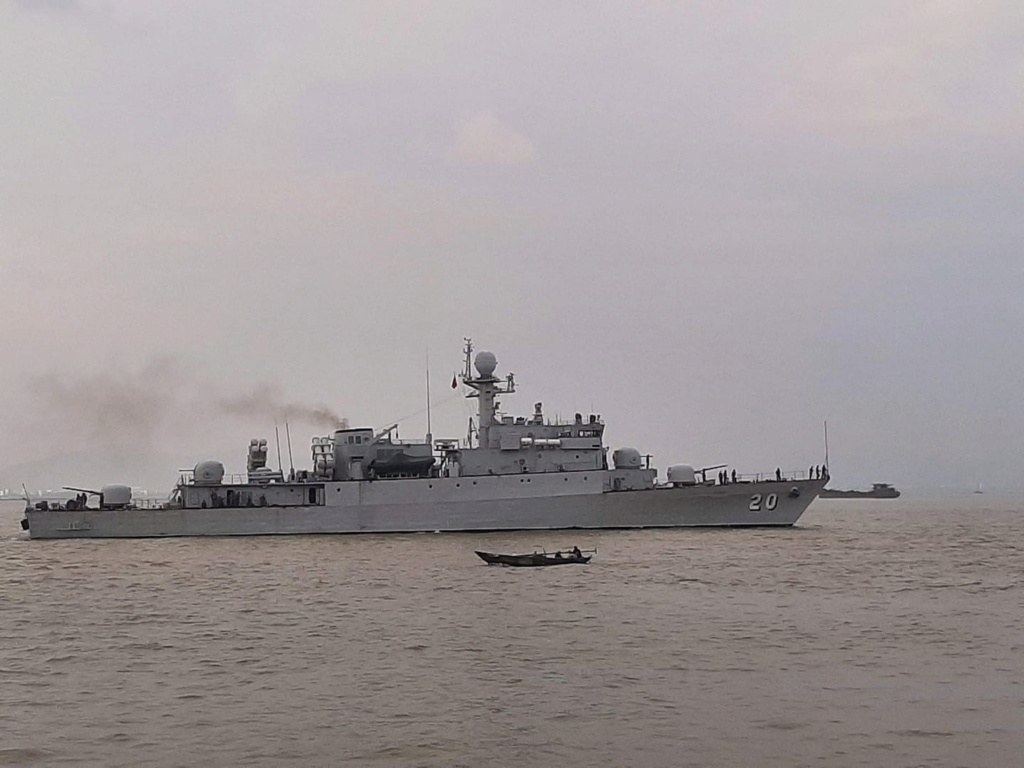 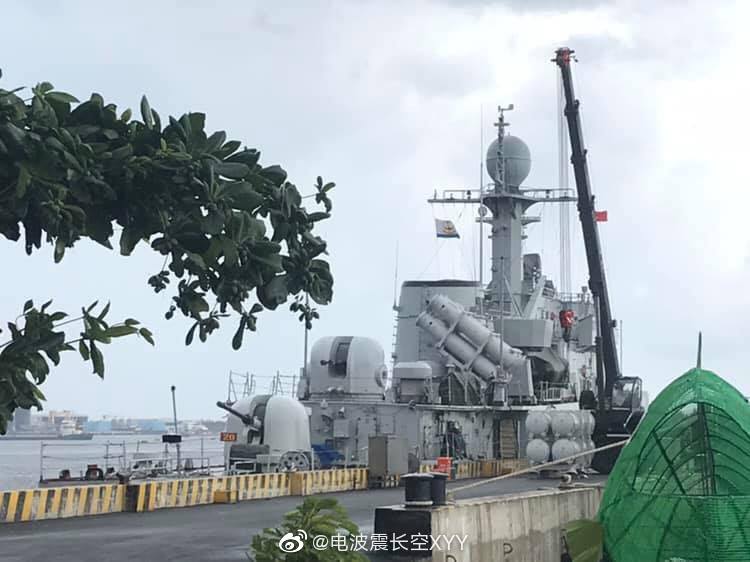 The Vietnamese installed their own versions of the Russian 3K24E Uran-E anti-ship complex on a Pohang type corvette (former RCC 765 Yeosu) received at the end of 2018 as a military aid from the South Korean Navy.

As bmpd colleagues previously reported, Vietnam became the second country in the Asia-Pacific region to begin developing its own missile based on the Russian 3M24 Uranus (NATO designation SS-N-25 Switchblade). The first such country was North Korea, which previously showed images of a missile that looked very much like a Russian medium-range anti-ship missile.

About the Vietnamese program, in contrast to the North Korean, a little more is known. The Vietnamese version is designated KCT 15 and is the result of technology transfer from Russia. The nature of the program is still unclear: it remains to be seen whether Vietnam will organize full-cycle production, or whether it is only an assembly from Russian components. Hanoi and Moscow began discussions on the local “production” of 3M24 missiles in 2011-2012. The missile was developed at the Zvezda-Strela State Research and Production Center, on the basis of which the Tactical Missile Weapons Corporation (KTRV) was formed.

Initially, purchases of 3M24 complexes were carried out with the aim of increasing the anti-ship potential of the Vietnamese naval forces. Maritime territorial disputes in the region only accelerate the procurement of sea-based weapons. Local production of its own version of 3M24 will contribute to the development of the Vietnamese defense industry and simplify the logistics of missiles. Unit costs may also be reduced.

The Vietnamese KCT 15 rocket was first shown to the public at the end of 2015 as part of an exposition that also showed an air defense radar. A twin launcher for ships was introduced next to the rocket.

According to the resource IndoPacific News, Vietnam has developed its own project of a small submarine with a displacement of about 100 tons. The boat, apparently, is intended mainly for the transport of special forces. Information on the construction of boats is not yet available. 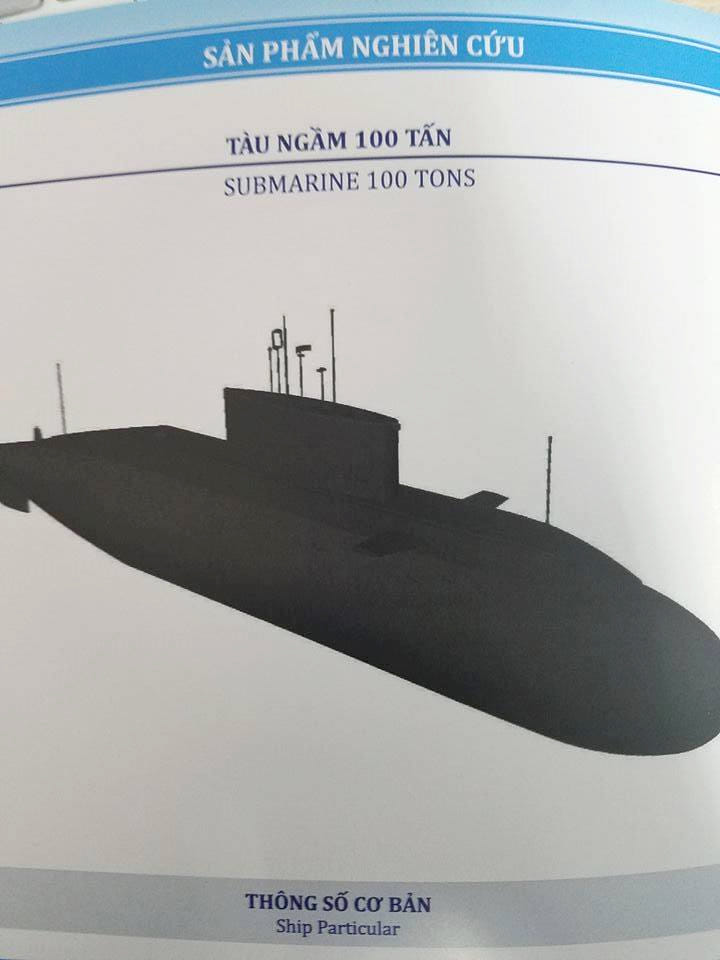 On the bmpd side, we recall that Vietnam in 1997 acquired two small submarines of the Yugo type in the DPRK, and, apparently, the new Vietnamese project is partially based on their design