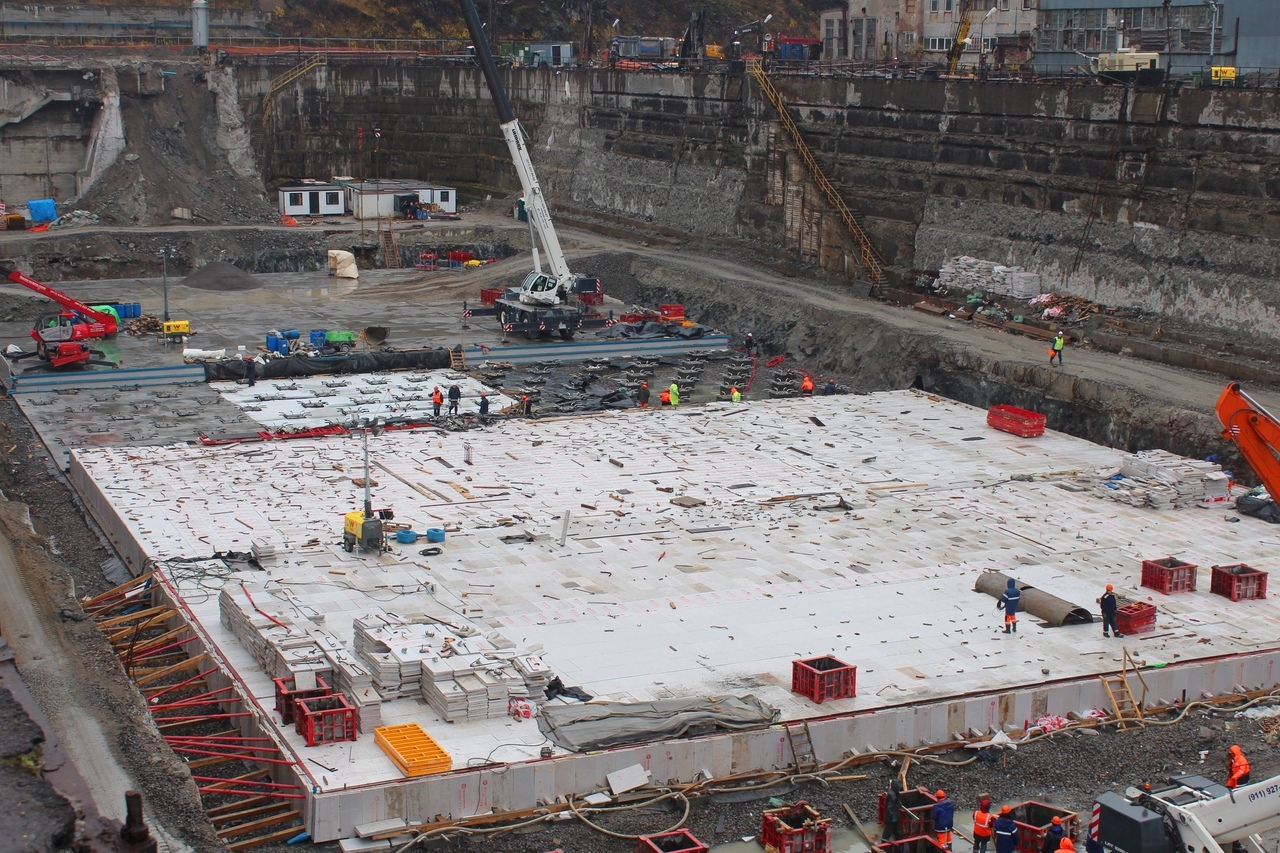 They should build more of these but how about adding a few heavy duty cranes on the sides to turn this dry dock into duel role construction and repair yard?

Some guy on twitter with the name of a Hong Kong pop singer quoted in a Eurotrash Military contractor Press release aggregator site.

That said its probably true: They can't repair it.
Yet.

Anyone with Google could have noticed that the Drydock they need to complete the repair isn't finished being rebuilt -> repair can't be completed yet.

MOSCOW, November 9. / TASS /. The heavy aircraft-carrying cruiser of project 1143.5 "Admiral Kuznetsov" is planned to be delivered to the modernized dry dock of the 35th SRZ branch of the Zvezdochka ship repair center in June next year. At the same time, the delivery date of the ship will be shifted to 2023. This was reported to TASS by a source in the military-industrial complex.

"The docking of the cruiser Admiral Kuznetsov will take place in June next year. The ship will stand on the slipway of the new dock for staging the propeller-rudder group and hull work. Its repairs will be completed in the summer of 2023, and at the end of the same year the aircraft carrier will be handed over to the fleet," the source said. agencies.

According to him, the updated dock is capable of accepting the cruiser by the end of this year. "However, this technological procedure is safer to carry out in stable weather, in warm and light times," he added.

Who is Louis Cheung_hk and why should we believe him?

Equally... who cares... what is one extra year... it is going to take time for them to get escort ships ready to sail around teh place with her while she is testing all the new stuff so even if she was handed over now we would still have to wait.... I am sure the crew would need a bit of refresher training on what they did before and what has now changed...

It was already known they would deliver it in 2023, and a new thread for these no news when we already have one for the Kuznetsov is absurd if you ask me...

Photo was taken yesterday during the hadover ceremony of the icebreaker SiBIR.

Photo was taken yesterday during the hadover ceremony of the icebreaker SiBIR. 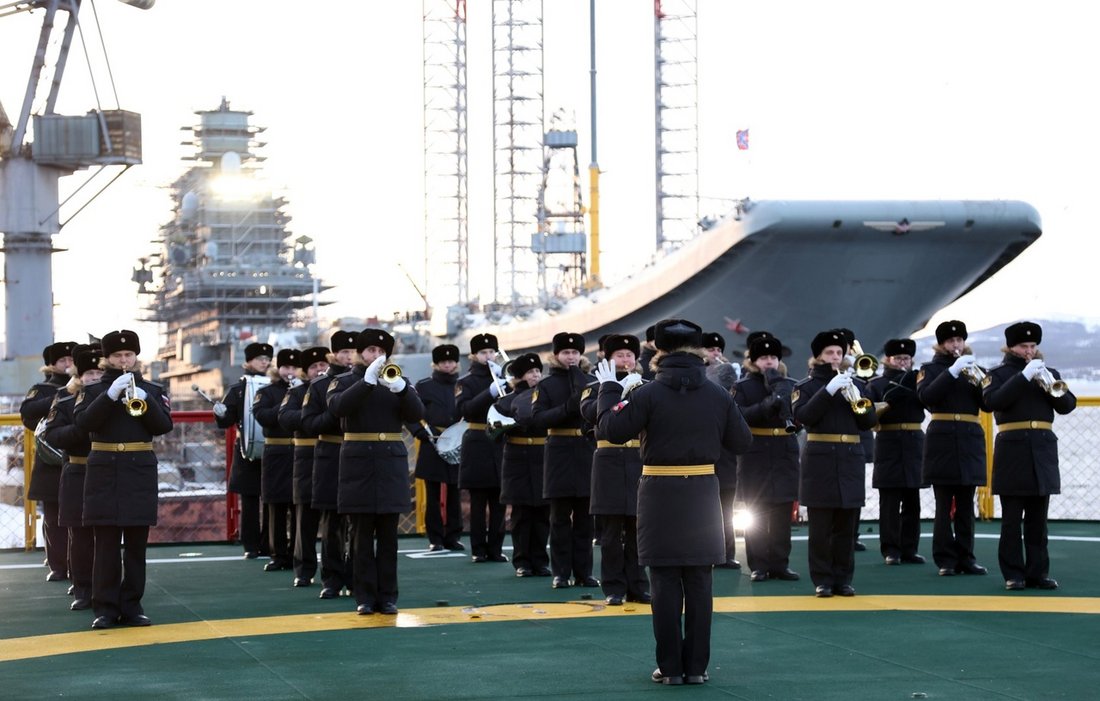 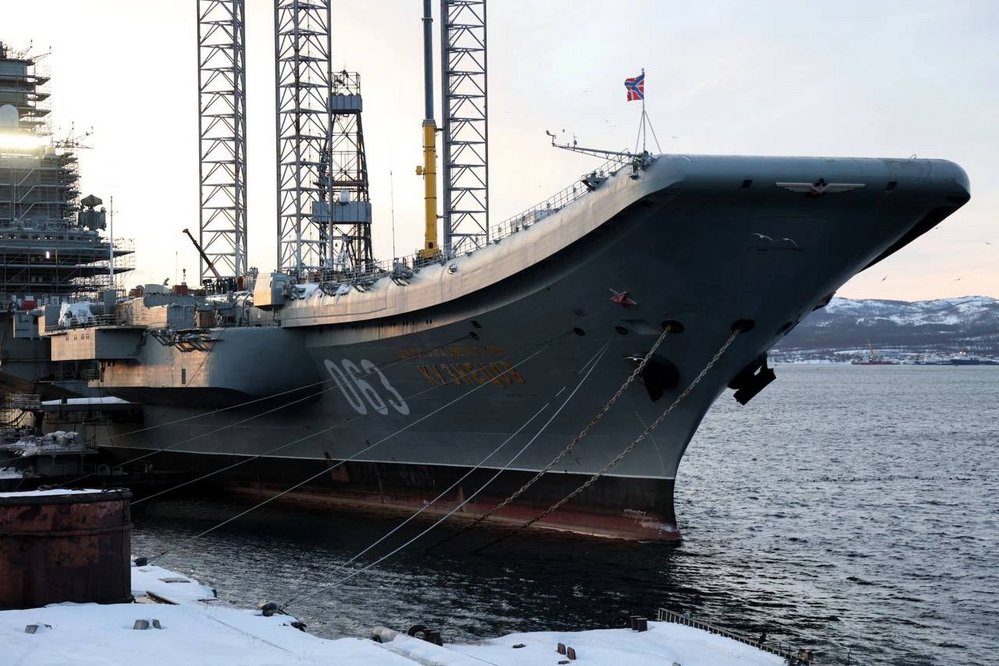 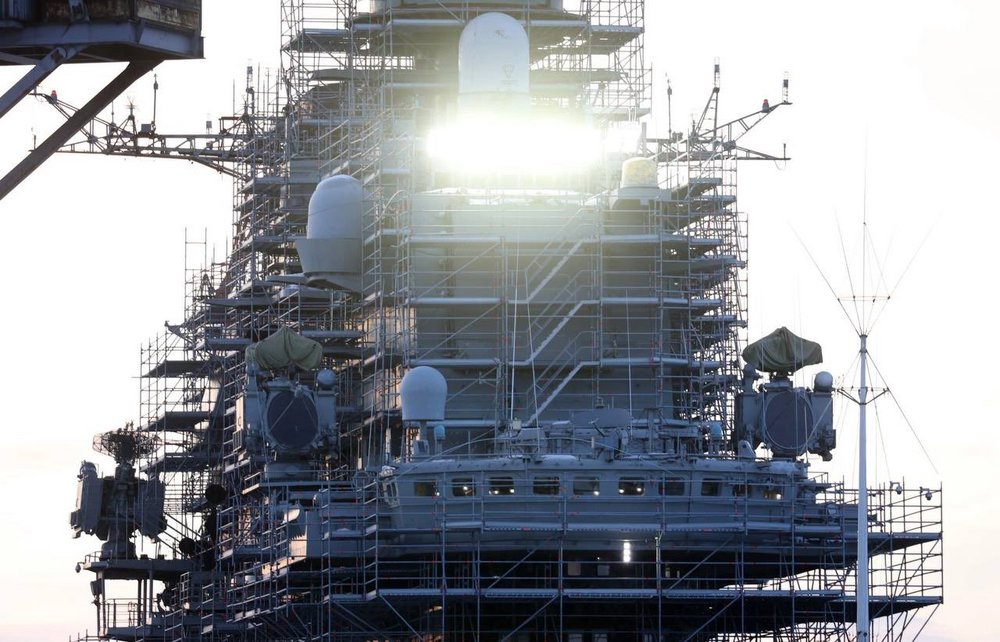 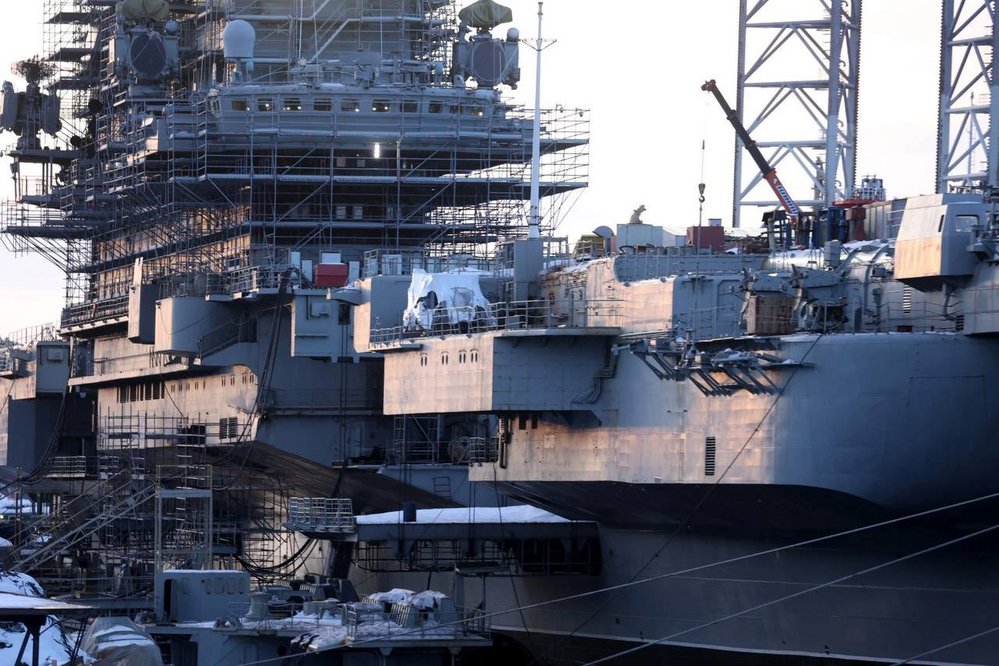 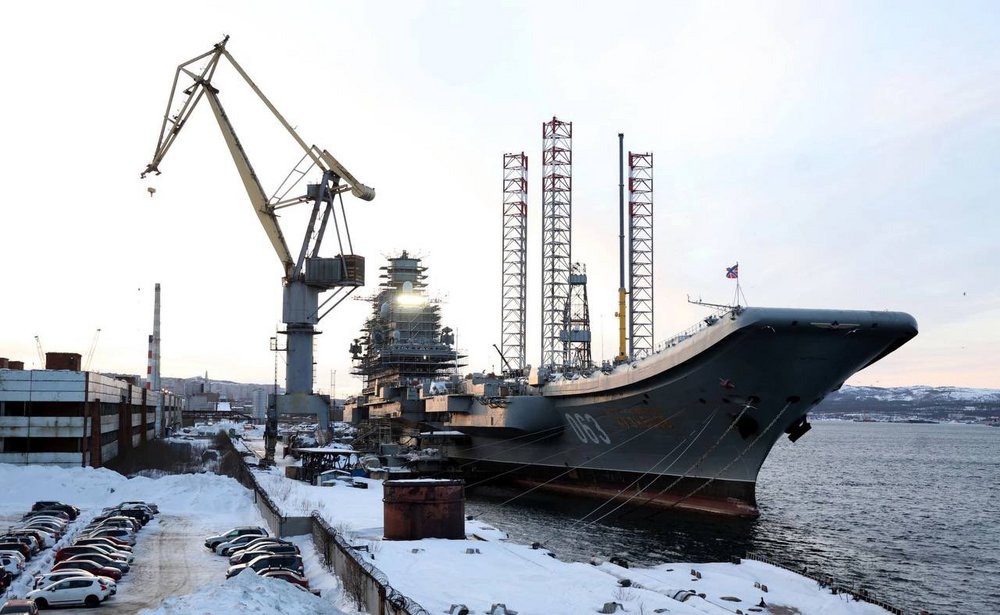 Mir wrote:They should build more of these but how about adding a few heavy duty cranes on the sides to turn this dry dock into duel role construction and repair yard?

How so? Will not that be for both?
Mir

Mir wrote:They should build more of these but how about adding a few heavy duty cranes on the sides to turn this dry dock into duel role construction and repair yard?

How so? Will not that be for both?

I'm not sure if this dock will be for repairs and mods only. You will need to add a couple of overhead cranes etc to turn it into a construction site as well. However someone posted a satellite pic of a huge civil dock just across on the other side - so problem solved if they need some more construction space.
Mig-31BM2 Super Irbis-E

In these two dry docks, gas and oil ships and platforms should be built. Is this permissible that there could also be carriers and cruisers? Is a German company involved.
Mir

Mig-31BM2 Super Irbis-E wrote:In these two dry docks, gas and oil ships and platforms should be built. Is this permissible that there could also be carriers and cruisers? Is a German company involved.

Well Europe (Germany) is a very tense place right now so who knows what may or may not happen. One thing is pretty sure though - EU gas prices will be very high for quite some time to come!

We definitely live in a different world now: the repairs of the Kuznetsov go better than expected

The only Russian aircraft carrier cruiser "Admiral Kuznetsov", undergoing repairs at the 35th shipyard in Murmansk, is being prepared for transfer to dry dock. This was reported by two sources in the Russian defense industry familiar with the situation.

As stated, the timing of the transfer of the aircraft carrier to the dock has shifted, but not to the right, but to the left. If earlier it was reported that the ship would be docked no earlier than this summer, now new dates have been announced - April 2022. According to sources, docking and other work in the dock on the Admiral Kuznetsov will last until September, after which the aircraft carrier will "return to the water."

It is expected that the aircraft carrier will be docked at the 35th shipyard in April. Dock repair will last until September

Thus, it can be assumed that work on the creation of a new dry dock on the territory of the 35th shipyard is being completed; The contract for the modernization of the dry dock itself was signed in July 2019 after the flooding of the floating dock PD-50. The modernization itself consists in the restructuring of two adjacent dry docks of the plant (one 187 m long and 28 m wide at the top, and the other 236 m long and 30,8 m wide at the top, both docks have a bottom width of 22 m) into one large dock by demolishing the partition between them. As a result of the modernization, the largest dry dock in Russia will be created to receive large vessels and ships, which will have a length of 335 m and a width of 60 m along the bottom and 70 m along the top.

Recall that the timing of the return of "Admiral Kuznetsov" from repair was repeatedly postponed, the last time the USC announced that they would transfer the aircraft-carrying cruiser to combat strength in 2023.

They possibly want to start laying down new ships and don't want it to be sitting there for another year taking up space....
Big_Gazza

Looks like the dry-dock for the Kuznetsov is being prepared for her transfer? 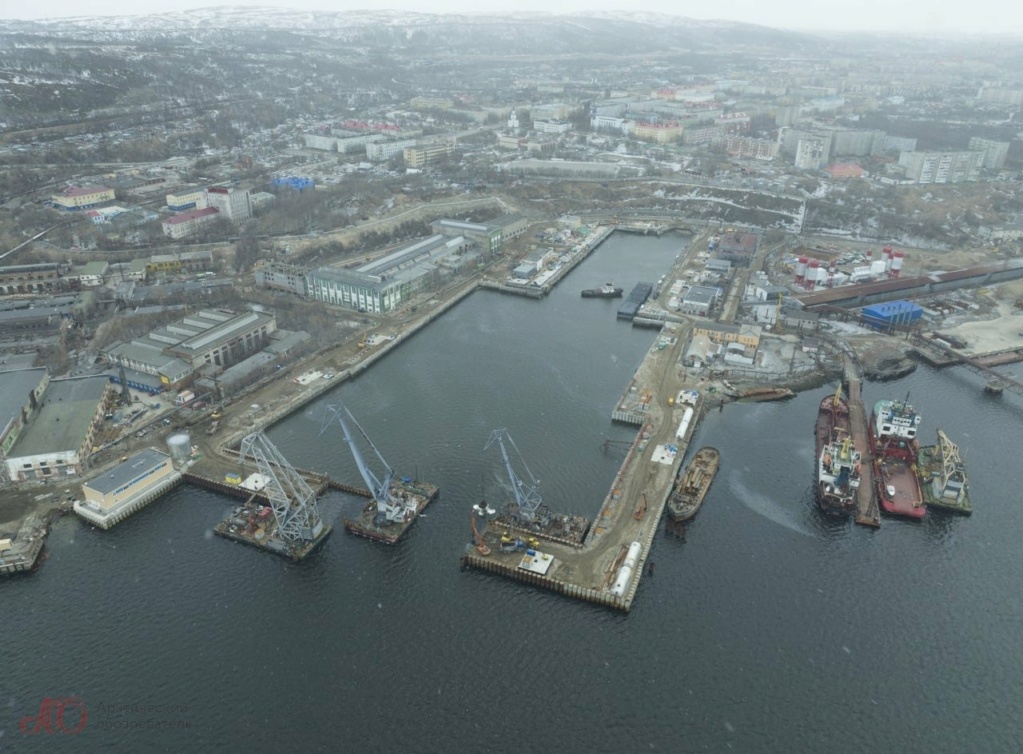 Hopefully the situation in the Ukraine is forcing them to realise they need global reach and to defend their access to the world via the worlds oceans and seas and that their navy has to become an important part of that...

Serial production of Corvettes and Frigates... assuming they have the propulsion systems for them should be a priority, while upgrades to older big ships should get them to a level where they can operate away from Russian waters for long periods because their size should allow for greater endurance and more crew comfort... especially if the upgrades reduce crew sizes to free up more space.

They need to start laying down a destroyer design, hopefully nuclear powered and modern... even if it doesn't hit the water for 7 years it is a direction they need to move in because Frigates are not good enough to defend 40K ton helicopter carriers, or to sail the seven seas.

Big_Gazza wrote:Looks like the dry-dock for the Kuznetsov is being prepared for her transfer?

That is some SERIOUS dry dock there...

GarryB wrote:Hopefully the situation in the Ukraine is forcing them to realise they need global reach and to defend their access to the world via the worlds oceans and seas and that their navy has to become an important part of that...

I don't think that has ever been put into question by the deciders in the military, but indeed now corruption and incompetence are not going to be very expensive for the responsible and less budgetary BS will need to be heard. So hopefully we see some projects being unfrozen and the naval construction changing gears, the multipolar world is indeed going to need to fight piracy and attempts at imposing Western hegemony in the high seas

Source: the Admiral Kuznetsov aircraft carrier will dock for repairs on May 15-17

It will take two months to restore the bridge and pump out water, the source said.

MOSCOW, May 13. /tass/. The heavy aircraft carrier Admiral of the Fleet of the Soviet Union Kuznetsov will dock for repairs during May 15-17. This was reported to TASS by a source in the military-industrial complex.

"It is expected that the aircraft carrier will dock on May 15-17. Then it will take two months to restore the bridge and pump out water, " he said.

Earlier, a TASS source reported that the dock repair of the Admiral Kuznetsov will last until September. The second source confirmed this information, adding that in September the aircraft carrier "will return to the water." "Now the task is to take the aircraft carrier out of the dock until the ice is frozen, otherwise everything will move to 2023," he said.

On March 31, sources in the military-industrial complex told TASS that the 35th Ship Repair Plant (SRZ, a branch of the Zvezdochka Ship Repair Center, part of the United Shipbuilding Corporation, USC) is ready to receive the aircraft carrier. By that time, the operation to fill the dock with water had been completed. The next operations are removing the bridge, putting it in the ship's dock, restoring the bridge, and pumping out water. Then it was assumed that this would take up to six weeks.

TASS does not have official confirmation of this information from USC.

Earlier it was reported that the Sevmash plant will build a batoport in 2022 as part of the technical re-equipment of the dry dock at the Murmansk 35th SRZ, where the dock repair of the Admiral Kuznetsov aircraft carrier will take place. The batoport will replace a temporary bridge in the dock. 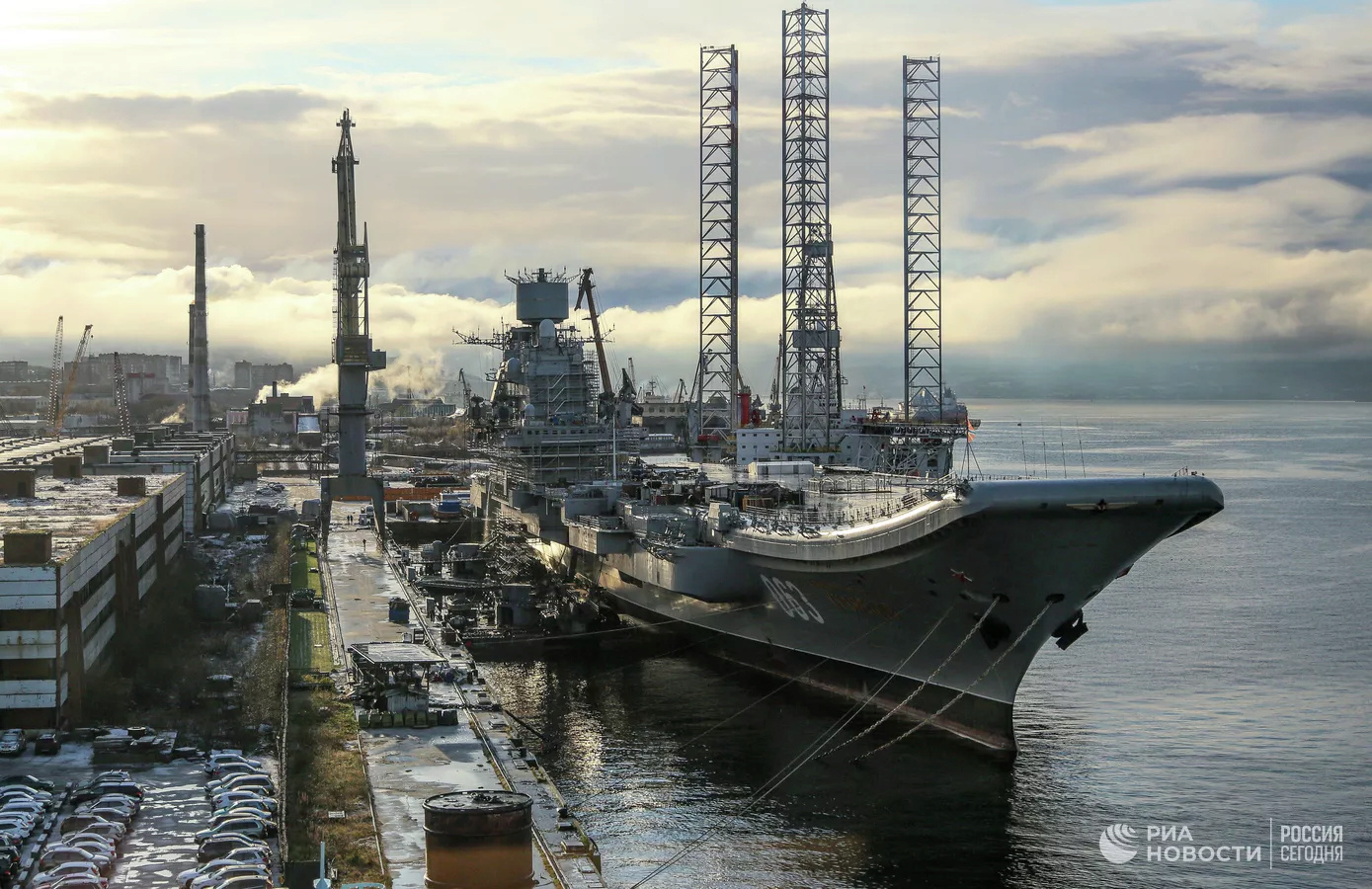 MOSCOW, May 20 - RIA Novosti. The only aircraft carrier in the Russian Navy, Admiral Kuznetsov, has docked at the 35th plant in Severomorsk for repairs and modernization, Aleksey Rakhmanov, general director of the United Shipbuilding Corporation (USC), told RIA Novosti.
"The docking operation for the Kuznetsov has been successfully completed," Rakhmanov said. According to him, this operation was planned to be carried out on May 14-15. "However, a strong wind rose up to 17 meters per second, so we decided to postpone the operation until more favorable weather," the USC head explained.


Earlier, Rakhmanov told the agency that when signing the contract for the repair and modernization of the cruiser and determining the required scope of work, it was assumed that only one of the four gas turbine units was to be unloaded and repaired. Then it was found that all four units needed repairs, and this is a total of 10-11 months of work. However, in this case, if other defects are not revealed, in 2023 the ship will be transferred to the fleet, as planned. 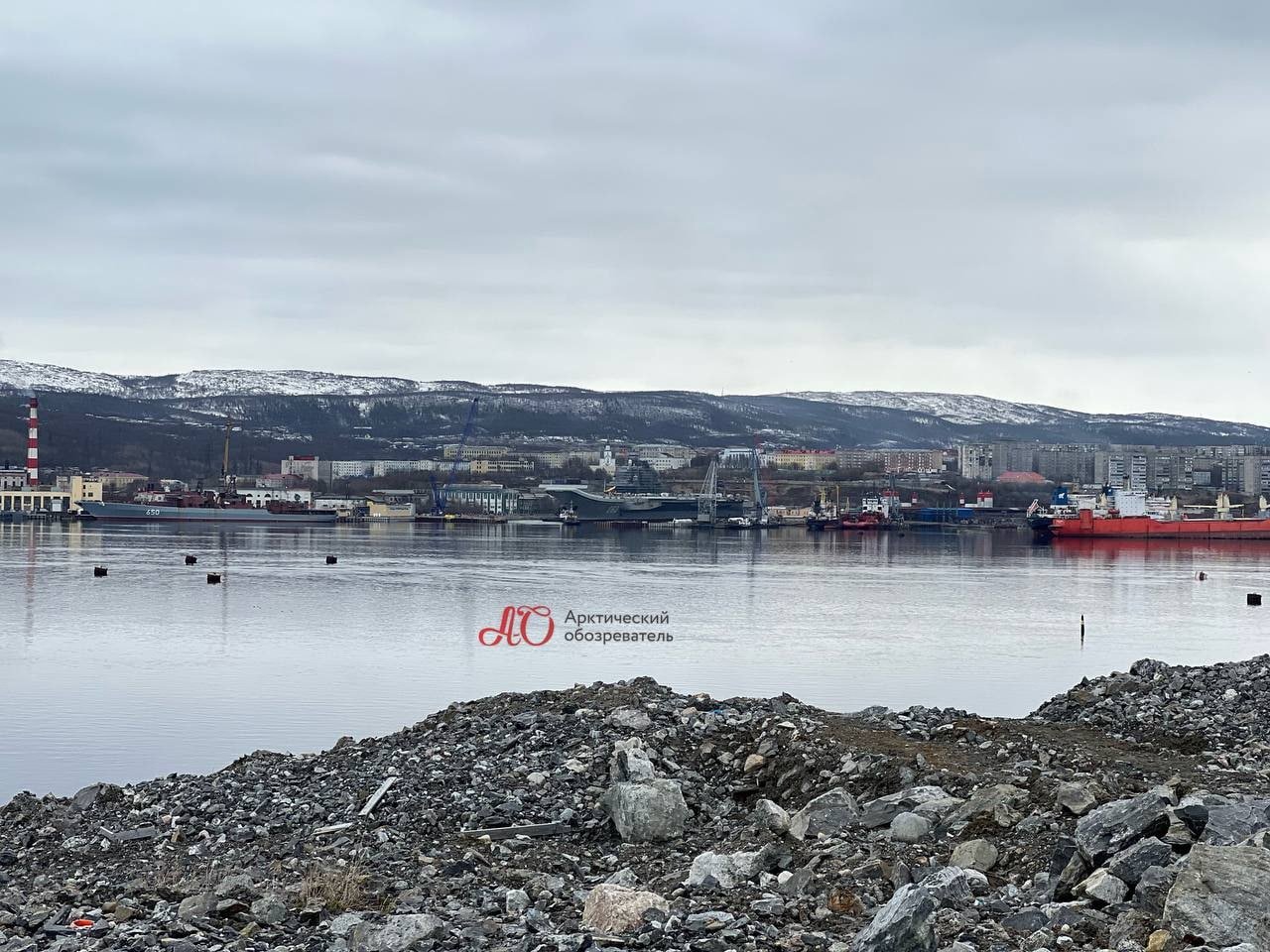 That seems to be the case. The ship is already set up in that dock. What is striking is that it is the end of May and the snow is still on the hills. Admiral Chabanenko is on the far left.