Isos wrote:
The main tactic to attack AD is to fly low and try to launch quickly ARM missiles.

Do they not still have that retarded backup plan of trying to dodge missiles and use dumb bombs against missile sites?

Isos wrote:
The main tactic to attack AD is to fly low and try to launch quickly ARM missiles.

Do they not still have that retarded backup plan of trying to dodge missiles and use dumb bombs against missile sites?

I doubt. HARM or cruise missiles until they destroy all the modern SAMs.

NATO doesn't plan to fly anything where there are modern SAMs.

That's why it's important to have plenty of Tors, Pantsir and Sosna missiles systems to destroy PGM attacking your radars and S-400s.
Hole 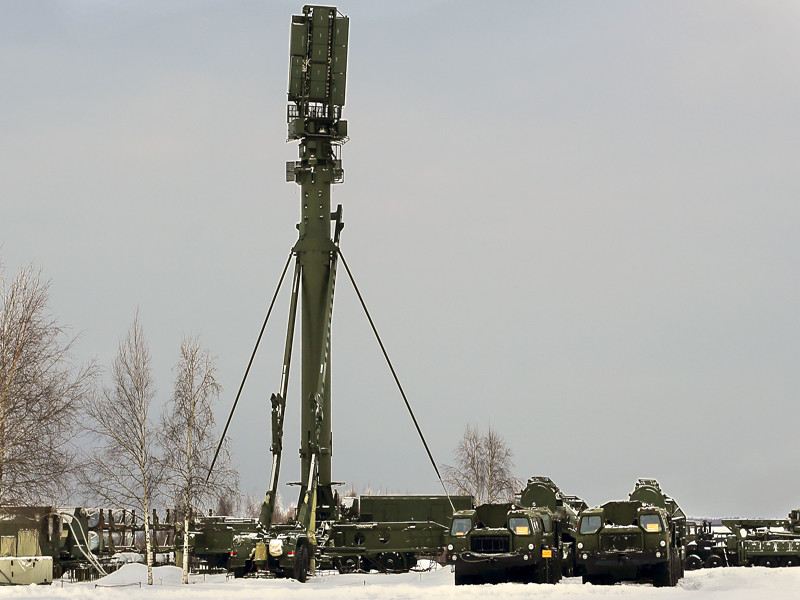 That's a very limited solution. It doesn't increase that much detection range against low flying targets.

They will always need to deploy lot of SHORADS and medium range SAMs around those S-400 to really protect them.
miketheterrible

With new command and control setups (mobile), most AD systems are unmanned and even in a saturated attack they expect to lose some equipment, but since all can be easily controlled from another point, it doesn't make them lose a whole lot if a few systems knocked out.

One thing not mentioned is that Russia uses EW systems in ad structures to try and spoof systems and jam targeting. So just another layer added.
Singular_Transform

Looks like no one has understanding about the IADS working.

These are the early warning / target locator equipment.

The S-x00 system activated only if they have a command to destroy an identified target, in that case they activate the relevant radars for acquisition , illumination ,target tracking and missile guidance.

The S-x00 system use its radars for minutes only, after shooting they most likelly pack everything and move to a new location.


It is next to impossible to target the early warning radars with HARM missiles.
The position of the S-x00 units unknown .

How could anyone conduct a saturation attack in this enviroment ?

How could anyone conduct a saturation attack in this enviroment ? wrote:

There are plenty of ways to find an AD system. One could be a lucky satelitte image analyst. Then you just try to bomb it with cruise missiles.

That would be hard against Russia but a country with much smaller forces and few systems like Venezuela would have hard time fcing cruise missiles attacks.
GarryB

HARMS and cruise missiles are trivial targets for modern Russian SAMs... even SA-8 and SA-9 and SA-13 units would slaughter cruise missiles, while TOR and Pantsir and BUK and S-350 are intended to destroy HARMS and standoff weapons.

And of course most components move... TOR and Pantsir can engage targets while moving, and of course the local air power can also contribute to dealing with air threats and missiles can be launched at staging areas and enemy launch platforms before they launch maximising their effect.

For every SAM battery there will be inflatable decoys and jammers with most batteries receiving target data from the IADS network rather than their own sensors... so they are not revealing their own positions.

A single TOR vehicle in a battery could turn on its radar to detect targets and hand those targets to the other vehicles in that battery to deal with in electronic silence.
Hole

If a fighter jet flies very low, trying to avoid early detection, the range of his sensors and ARM will be low as well, propably down to something like 50 - 60 km. The best option would be to fly high and try to jam the radars until you can launch your anti-radar missiles at maximum range. The name DEAD for that mission is very fitting.

There are plenty of ways to find an AD system. One could be a lucky satelitte image analyst. Then you just try to bomb it with cruise missiles.

That would be hard against Russia but a country with much smaller forces and few systems like Venezuela would have hard time fcing cruise missiles attacks.

The full NATO force failed to destroy a single Serbian high altitude SAM , and they dedicated third of those missions for SEAD.


Problme for the agression is the defender has teh next equation:
Required stauration attack missiles = (Number of SAM systems / detection chance + number of decoy sites /detection chance) * efficiency of the short range SAM protection systems.


Means the defender has to solve a linear programming equation, that has to deliver the required cost (in regards of manpower hours) of HARM missiles to destroy the defender assets one magnitude higher than the cost of the IADS.

The decoys cheap, and the number of saturation missiles dictated by the capability of SAM sites to defent themselves.

Means with relativly few PANTSIR ,and super cheap decoys it is possible to require thousands of missiles to destroy one single radar.


In Serbia the NATO was forced to shoot HARM missiles in the possible direction of radars,wasting the inventory to false / not existing targets.
Consdier if the had pantsirs, the NATO would have to shoot tens of missiles for each bomb they drop.


And that was an incapable, extremly outdated system.
GarryB

More to the point that HATO essentially had full air control over Iraq in the 1990s and still didn't destroy a single Scud launcher on the ground in the process of launching a missile despite launching missiles in huge numbers.

In the Kosovo conflict, again they had full radar and air coverage that was not effectively interfered with by anyone, they were able to mobilise the resources of HATO in a local conflict they didn't have to move large distances to engage in, yet their performance against mediocre equipment was terrible... but then their much better performance against forces in the Middle East against better equipped enemies shows it is how you use your equipment as much as what equipment you have.

Their problems over Russia... there is no surprise and the Russians will be able to see everything they are doing in real time, and they have a competent air force and ability to strike back... and after the first attacks begin they will be able to reciprocate and attack vulnerable things in EU or further afield if they deem it necessary.

With HATO being so air power based attacks on there HQs and communications centres are not something they have ever had to come to terms with against any other enemy since WWII.

I don't think they would cope well at all.

The real irony is that people suggest carriers are sitting ducks, but they are at the hub of an IAD that is the strongest you can make it at sea, which is why most naval powers want carriers because air power is a force multiplier but you don't want it to be your only defence...

OTH radar provide early warning, which is critical... SAMS and aircraft can't just be switched on like a light... many naval SAMs require 10 minutes to prepare for operations and most are not intended to be operational 24/7 for long periods.

An aircraft carrier with an AWACS offers the closest equivalent to a naval group, though their mobility helps too.
tanino

It is not a coincidence that Russian designers are extending the range of the short range.

the short range of the 90's, no longer exists, it has been incorporated with the medium range.

tanino wrote:The 40/50 km of control (visible horizon) is the challenge of the next 5-10 years.

It is not a coincidence that Russian designers are extending the range of the short range.

the short range of the 90's, no longer exists, it has been incorporated with the medium range.

dino00 wrote:The Ministry of Defense of the Russian Federation announced the development of a new S-550 air defense system

Probably a mistake, they wanted to say S-400...but never know

It's vedomosti - in other words, just nonsense.

It's from here in Russian automatic legends it says S-550...

S-300 was used as an ABM by Azerbaijani military. They got 2 scud. Buk also destroyed Smerch rockets. It's amuzing to see how well they were trained and used the same weapons as Armenians but with much better effectiveness. Everyone will remember how the Armenian S-300 was protecting them with its launchers not deployed.

Scuds and Smerch rockets are relatively simple targets... the latter would be easier if not launched in large volumes of course...

None of these are difficult targets except the Smerch if launched in very large numbers... ie several batteries launching hundreds of rockets would quickly deplete any inventory of SAMs.

Would question how much the Armenian side even got involved in this situation... it sounded like a thrashing because it was Azerbaijan against Nagorno Kharabakh. (spelling)...

A new set was delivered to the 210th ZRP to replace the retired match. During the strategic exercises "West-2021", the regiment was transferred to Belarus, from where it returned without its match - at least one division of the S-400 air defense system remained for the development of the Belarusian air defense forces.

Since 2007, excluding the current supply, the Russian air defense forces have received seventy divisions of S-400 air defense systems . According to the Minister of Defense of the Russian Federation, Army General Shoigu, among the priorities for 2022, " To put in the Aerospace Forces... 5 divisional sets of the S-400 Triumph anti-aircraft missile system.

The 210th Anti-Aircraft Missile Regiment (Dubrovki, Moscow Oblast) of the 4th Air Defense Division (HQ in Dolgoprudny, Moscow Oblast), the 1st Air Defense and Missile Defense Army (HQ in Balashikha, Moscow Oblast) received a batch of S-400 surface-to-air missile systems to replace the ones that the regiment had recently left at the new Russian air defense base in Grodno, Belarus. https://www.gfsis.org/russian-monitor/view/3105

NOTE: different take on this and believe it was 300PM's that moved to Belarus. It would make sense.

Another idiotic simulation using data from the supposedly realistic game Command Modern Air and Sea operations which is actually used by the US and British militaries, so these simulations probably make US and british pilots arrogantly confident in their abilities

The problems:
Russians have no idea that MALD are decoys
No Russian EW of any kind
Su-35s and Su-34s still use 1980s R-27R because "le no money"
No Su-30s.
No gazetchik decoys
F-35s are invisible to L-Band radar
Bullshit inclusion of AIM-260 but no R-37M or R-77M
AIM-120Ds are immune to chaff
No usage of IRST


Comments are congratulating the video creator for creating the most realistic simulation of SEAD yet.

Lol that's just like in DCS which is a russian made simulator. Aircraft and air defence system are made with public data and you can program how good planes/AD are.

Note: all the air force around the world use this russian made DCS to train for free their pilots. French air force asked for the rafale to be developed for its needs not accessible to the public with real data provided to the company making it.