s-350 missiles look rather capable but with active radar homing missiles that are quite big they will still be rather more expensive than TOR or Pantsir... especially against drones or munitions...

It is certainly a clever way to increase missile numbers at a battery of course.

It's not only meant to destroy PGM. It can still hit fighters at a good distance.

The 300km range missiles of the S-400 won't be used at max range anyway against fighters. Specially against low flying targets where detection range is reduced to 40-50km then it's better to have a smaller missile with more rounds and better manoeuvrability.

They will still keep pantsirs around them for PGMs.
GarryB

The big S-400 missiles have ranges of 250km and 400km or thereabouts, but most cruise missiles literally cruise at medium altitudes to improve flight range so 200km from the target they might drop down and fly between 20-80m or so, but outside that range the chances of seeing them and shooting them down are quite good.
The S-350 have the added advantage of ARH so they can be below the radar horizon at launch... as long as the target is in the field of view when it starts to scan it should still get a hit.

I would suspect that for targets over the horizon the missile could transmit its radar view so the operator could select a target and perhaps launch more missiles at other targets revealed by that missiles ARH seeker.

The S-350 has the 9M100 missiles for CIWS self defence, though I agree TOR and Pantsir would also be useful too. 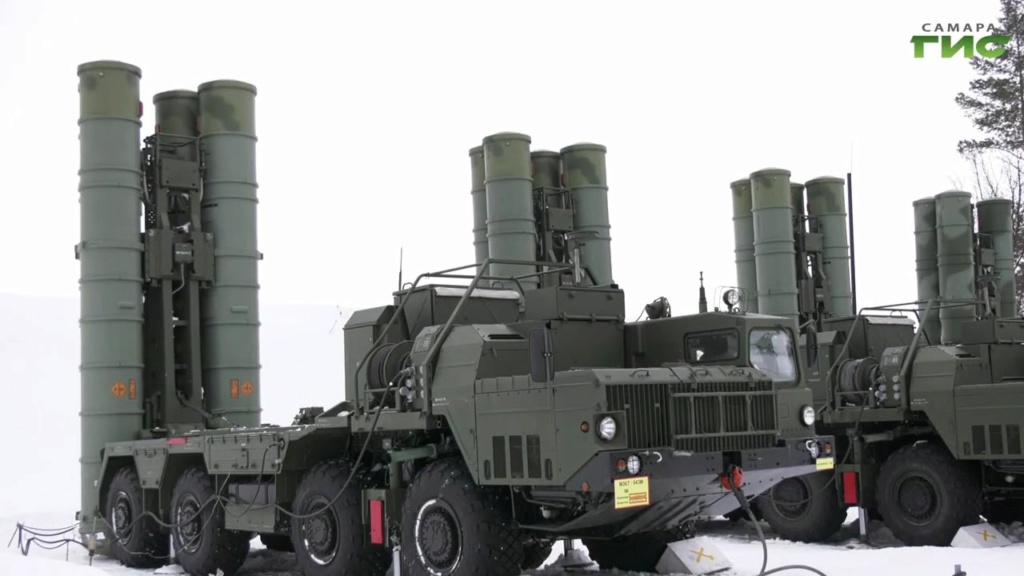 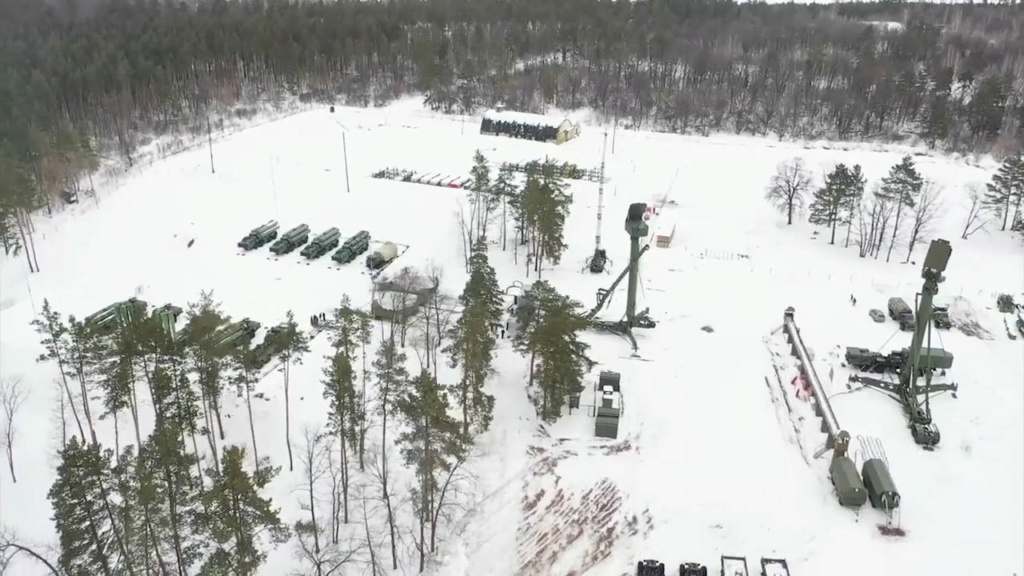 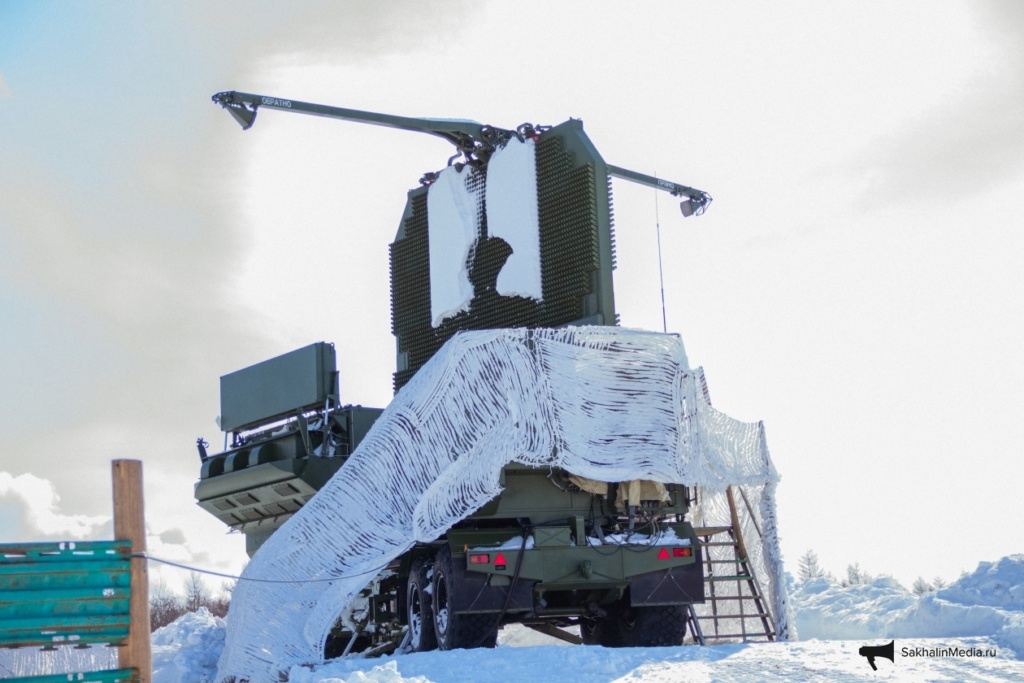 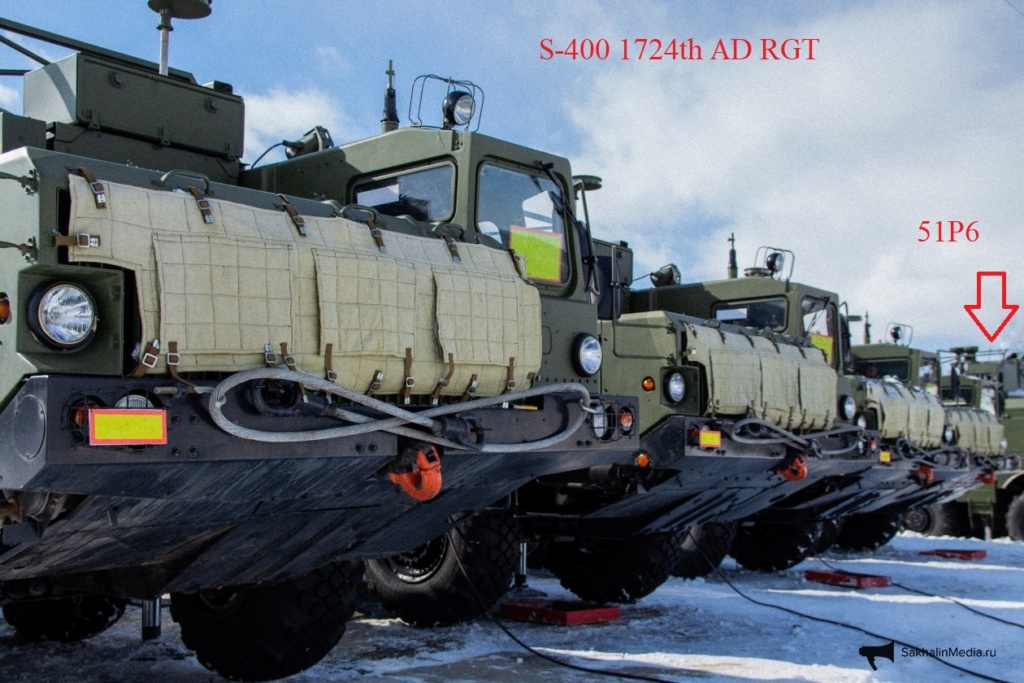 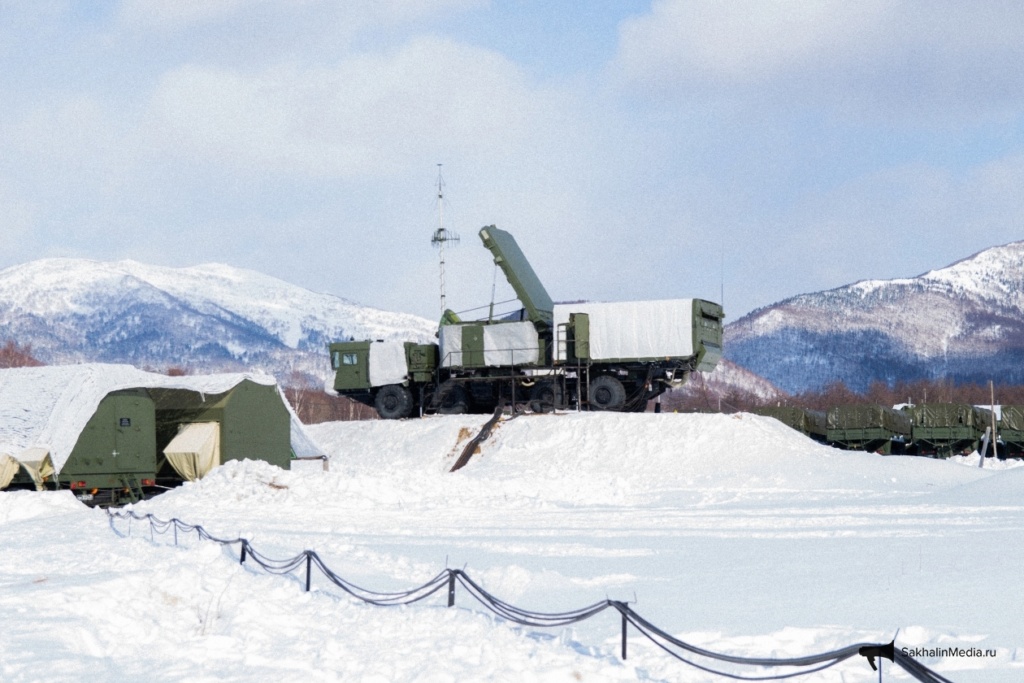 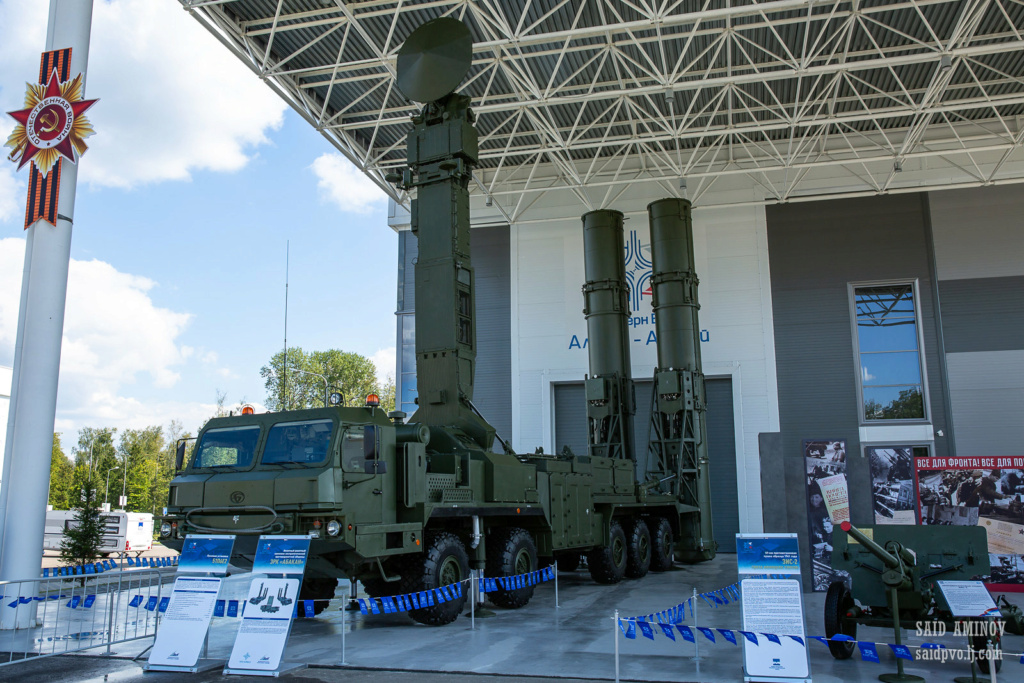 No it's not. It's wheeled s-300VM for protection of civilian infrastructures, bases or strategic points that are not on the frontline.
owais.usmani

owais.usmani wrote:Hmm, the twitter post from where I got this photo claimed it to be S-500. Do you have pics of S-300VM TEL? Isn't this model a bit larger than that?

This pic was posted by myself on s-300VM thread. You can go check there.

It is an Army system normally used to provide S-300 level protection for ground forces on the move so it is fully tracked system... which makes more mobile over short distances but less strategically mobile over long distances and also rather high operating costs.

It is not S-500... as Lsos points out he posted those photos but obviously in the Russia Army section in a thread about the S-300V.

@Lsos
Nice new video of the 9M96... shame they cut off the first part... there is only a glimpse.

Air defence in Sakhalin on the basis of the new air defense system S-400 Triumph completed. Reported by the Ministry of Defense.

Not sure date or how accurate this is.

George1 wrote:Air defence in Sakhalin on the basis of the new air defense system S-400 Triumph completed. Reported by the Ministry of Defense.

S-400 is also deployed on the Kuril Islands right?
magnumcromagnon

JohninMK wrote:Not sure date or how accurate this is.

The fact that they're saying S-300PM2's range is the confirmed range for S-400, and 400km isn't is all you need to know about the factuality of that infographic. No doubt they'll have a infographic on which types of SAM's that are most capable and best prepared to fight a pandemic.

The usual schizophrenic excrement. Russian "aggressors" are an existential threat to NATzO angels of mercy, but Russian equipment is
primitive and useless. They can't make missiles that hit targets beyond 250 km and their aircraft guns can't hit any reasonable target.
And Russians take off their clothes when things are hot such as "shown" in the Chernobyl docu-drama. And of course, Russian vaccines
are unsafe and unproven while western crapcines are next to ambrosia.

The Russian Ministry of Defense is working on the issue of deploying the unique S-500 Prometheus anti-aircraft missile systems (SAM), in particular, they can equip new regiments or brigades. The first deliveries to the troops of complexes capable of destroying ballistic missiles and satellites will begin this year. The staff of the formations will be determined depending on the location and forces of a potential enemy, experts say.

Sources in the military department told Izvestia that the possibility is being considered not to re-equip existing military units with Prometheus, but to form new anti-aircraft regiments or brigades. At the same time, according to the interlocutors of the publication, it is possible that the formation of new units of the Ministry of Defense may refuse. Then "Prometheus" will receive the already operating military units.

The plans to deliver the first S-500 systems to the troops in 2021 were announced in December last year by the head of the Rostec corporation, Sergei Chemezov. According to him, the developer of Almaz-Antey has already completed all the necessary tests of the novelty.

Deputy Defense Minister Alexei Krivoruchko, who oversees the state defense order, also confirmed plans to complete the Prometheus tests in 2021 and put it into service immediately after that. At the same time, serial deliveries, he said, will begin in 2025.

Earlier, representatives of the Ministry of Defense stated that the S-500 would not replace the existing air defense and missile defense systems, but would supplement them. The mobile "five hundredth" will occupy an intermediate position between the S-400 "Triumph" and the stationary A-135, which will provide the defense of the Moscow region from attacks by intercontinental ballistic missiles.

The specialization of "Prometheus" will be mainly missile defense. The new system is designed to reliably intercept medium-range ballistic missiles at altitudes of several hundred kilometers. It will also retain the ability to destroy aircraft and hypersonic vehicles.

I would think it would make sense to boost the performance of S-400 batteries in critical locations like St Petersberg and Moscow and the major military port bases with S-500 first.

And of course larger navy ships will likely deploy S-500 as well...

The S-500 extends the field of interception into near space so there is a new set of considerations. They probably need to
interface with the space forces in a way that the S-400 operators never had to. I am sure there is a reason for this
discussion.

GarryB wrote:I would think it would make sense to boost the performance of S-400 batteries in critical locations like St Petersberg and Moscow and the major military port bases with S-500 first.

Also, Launch tubes of SAM systems like S-400, PAC-3 has to be changed after a few launches. Not sure how many launches can be supported by each tube. IIRC around 5 launches.
Hole 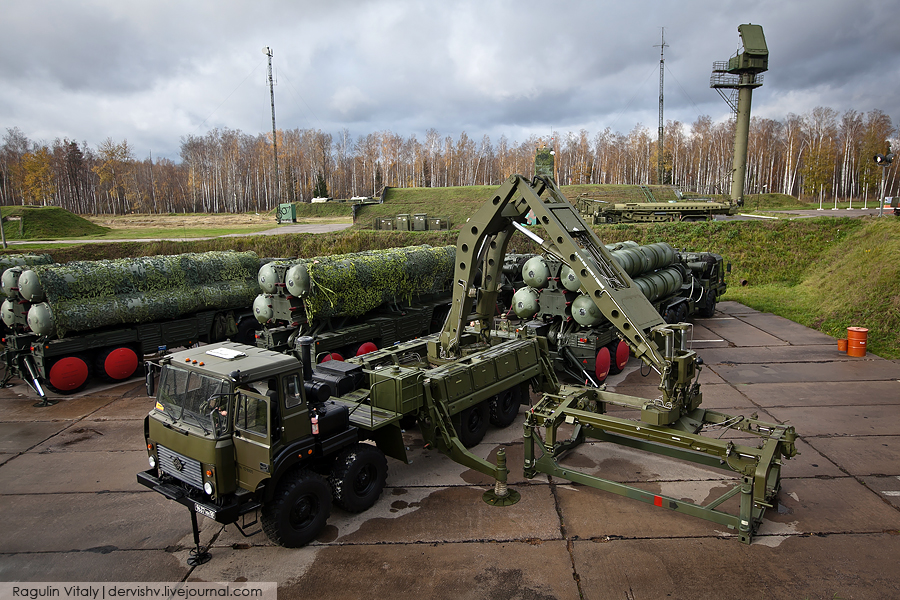 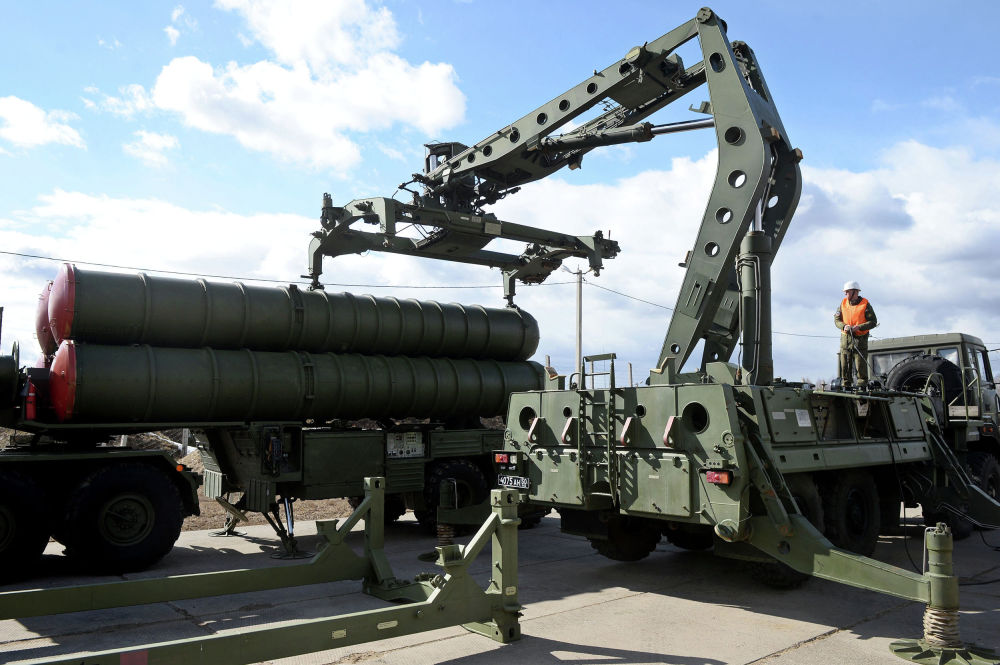 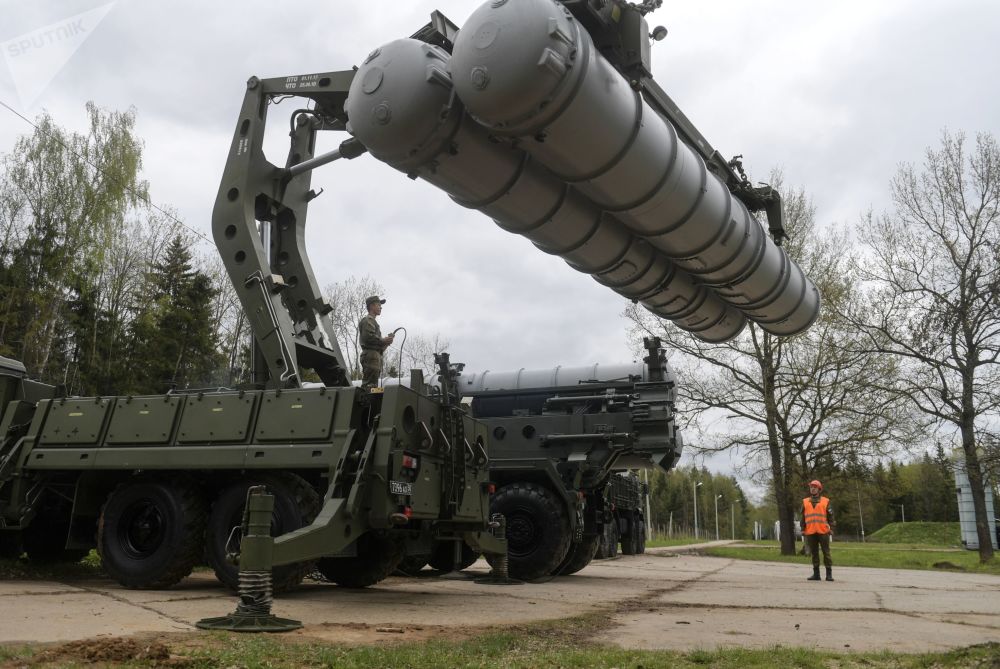 The tubes/containers are changed after each shot.

I peacetime they may recycle the launch tubes and send them back to the factory to be reused, but I doubt they would bother in war time.