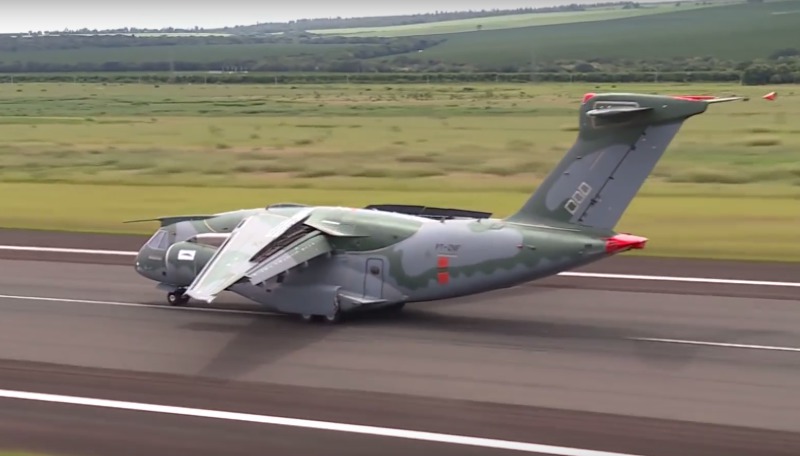 The routine of takeoffs and landings of the first prototype of the KC-390 is intense: on average, two flights a day. The Brazilian Air Force’s future military transport aircraft has already exceeded 150 flight hours; the assembly of the second aircraft has been completed, and it will soon join the flight test campaign. This phase is accompanied by pilots and engineers from different units of aircraft manufacturer Embraer, whose factory is located in Gavião Peixoto (SP).

Effectively started in October 2015, the flight test campaign involves over 1,110 professionals responsible for evaluating the performance and robustness of the largest aircraft ever produced in Brazil. Each flight tests the aircraft in different situations, at new altitudes, speeds and configurations. Flight tests are expected to continue for two years, and the goal is to obtain certification from the National Civil Aviation Agency (ANAC) and from the Institute of Development and Industrial Coordination (IFI), a military agency of the Air Force Command. After being certified, the KC-390 can be used on operational missions.

To allow improvements during the testing phase, 23 cameras have been installed inside and outside the fuselage of the KC-390 prototype. All images and other data collected are sent to the telemetry station, a remote monitoring that has high-tech software to analyze this information.

During this phase, the crew of test pilots and flight-test engineers, all of whom have extensive experience on civil and military aircraft, are Marcos Salgado de Oliveira Lima, a former Brazilian Air Force fighter pilot who has been with Embraer for nineteen years. He says that the KC-390 is the prototype with the highest availability in the manufacturer history.

The aircraft has already flown over 50 hours in its third month of testing, a number that is usually only achieved with the maturing of systems at a more advanced stage. Another difference is that this project had the longest wind tunnel tests, so that its aerodynamic configuration was frozen earlier.

"This integration of the teams that developed the aircraft, plus the airplane’s flight qualities, makes it very easy to pilot. It is precise and quick to perform all maneuvers while maintaining a smooth ride. It also offers the pilot a very low workload because it is as if the plane was coupled with the autopilot most of the time," he adds.

The aircraft’s gestation process was developed by the Brazilian air force’s Coordinating Committee of the Combat Aircraft Program (COPAC), the FAB, from the operational demands and the Air Force Command's requirements. The goal was to bring together in one aircraft the ability to carry out many different missions, including search and rescue, transport, in-flight refueling, cargo and paratrooper drops, medevac, and fighting forest fire.

Work done in conjunction with Embraer engineers made it possible to define the size of the KC-390 platform. A high-wing aircraft of generous proportions, powered by jet engines, it is able to land on unpaved and unprepared runways, and also uses the latest technologies in several areas. Among the innovations, it can be refueled and refuel in flight - helicopters as well as fixed-wing aircraft - and also land in Antarctica.

In the cockpit, five large touchscreen displays facilitate the pilot's navigation and change commands with a single touch. The avionics system is developed by the US company Rockwell Collins, ad does away with clocks, gauges and thermometers.

The FAB’s future transport aircraft will be the only one of its category to have a full fly-by-wire electronic flight control system, which in addition to providing greater efficiency for piloting will also provide integration with other missions. An example is the air-dropping of loads, where the fly-by-wire controls will act in real time in order to keep the plane on the pilot’s desired trajectory.

Foreign companies from three countries have also cooperated in the development of the KC-390. Argentina’s FAdeA manufactures spoilers, the doors of the nose landing gear, the door of the rear ramp, the flap fairings, the tail cone and the electronic cabinet. Two Portuguese companies, OGMA and EEA, are responsible for providing the central fuselage panels, the landing gear sponsons, the doors of the main landing gear and the tail elevators. A Czech company, Aero Vodochody, produces part of the rear fuselage, the fuselage doors, the emergency doors and hatch, the rear loading ramp and the wing leading edge.

"No doubt, the KC-390 is a world reference in terms of engineering. We employed what is most modern, both in what we already knew, and in new technologies to facilitate the development of the aircraft, given the FAB requirements," says Márcio Eduardo Regis Monteiro, the product development manager at Embraer.

Before certification, the prototypes will also conduct operational tests to test the KC-390’s performance and capabilities. Also planned are cargo drop missions in Brazil’s midwest, and high temperature tests in the northeast. It is also planned to fly out of the country for low-temperature tests and icing trials in the United States.

"The ultimate aeronautical technology that is built into the KC-390, gives it a huge performance advantage, as it is the only aircraft in this segment with all the updated technology. It will provide a very large operational flexibility to the FAB, "said Paul Gaston, Embraer’s KC-390 program manager.

Fruit of the latest technologies, the KC-390 will provide an operational boost to the armed forces and a breakthrough for Brazil’s aviation industry. In all, 28 units have been ordered by the Brazilian Air Force and will be delivered from 2018.

According to the FAB’s KC-390 program manager, Colonel Claudio Evangelista Cardoso, the new aircraft will contribute to the strengthening of the National Defense Strategy and the growth of domestic industry. "It's a milestone for the Air Force because we will receive an up-to-date aircraft, in fact what is most modern in its class," he says.

Thanks to its advantages, the KC-390 has aroused interest on the international market. According to the President of Embraer Defense & Security, Jackson Schneider, there is a market demand for new aircraft like this military jet transport. "We're talking to some potential customers. The feedback has been extremely positive, confirming that we are on track," he says.

The KC-390 series production line should start next year, and is expected to generate 1,060 direct and 5,300 indirect jobs. Claudia Renata Miranda, an electrician at the aircraft assembly plant, took part in the assembly of the prototypes. According to her, it is a great pleasure to be part of this process. "When I saw the plane taking off, I thought: Hey, I worked on that plane! It is like a child, we are very involved," she says.

According to the Algerian resource "Menadefense" in the material "L'Algérie teste le KC 390 d'Embraer", tests were carried out in Algeria of the Brazilian military transport and refueling aircraft Embraer КС-390. The plane was seen at Bufarik airbase. He stopped in Algiers for a few days as part of his international demonstration tour.

According to the resource, Algeria is currently working on a program to update its military transport aviation, and in this regard, the Brazilian proposal can be very interesting.

Note bmpd. Probably, this aircraft was the second prototype of the Brazilian mid-air transport and refueling aircraft Embraer KC-390 (registration PT-ZNJ), previously publicly presented at the air show in Le Bourget at the end of June.

On 9 October 2018, the Brazilian company Embraer reported that at its factory airfield in Gavian-Peixoto (the state of São Paulo) made its first flight the first serial medium transport and refueling aircraft KS-390, intended for delivery to Brazilian air forces. 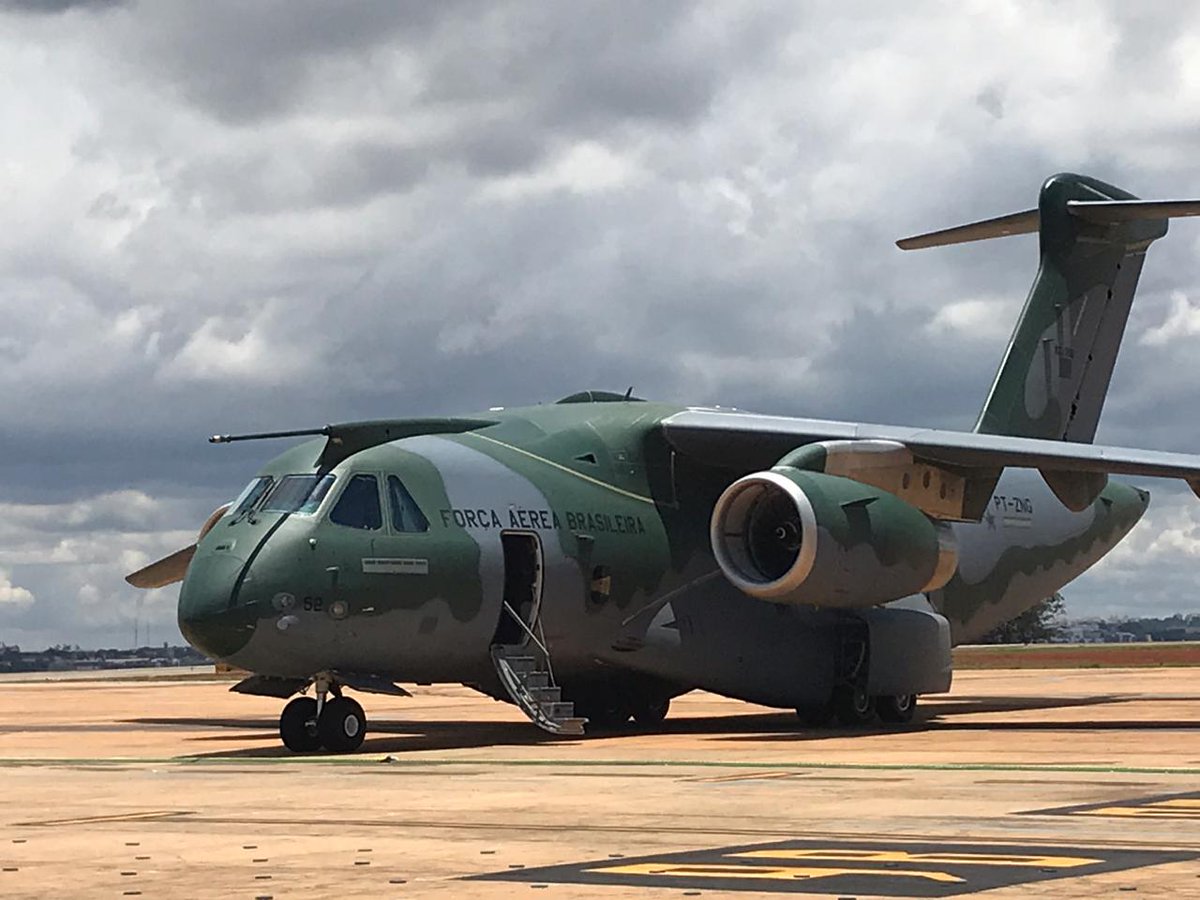 The certificate was presented by the director of ANAC, Giuliano Alcantara Noman. The ceremony, held at the 101st Brazilian Air Force Base, was attended by President Michel Temer, Defense Minister Joaquim Silva-i-Luna.

“The KC-390 certification, the largest and technically most sophisticated aircraft developed over the entire history of Embraer, reflects the high technological level achieved by the company,” said Paulo César de Souza-i-Silva, President and CEO of Embraer.

“I would like to congratulate the team that participated in the development of this aircraft in partnership with the Brazilian air force.” We are proud of the development of the KC-390, which will become the backbone of the Brazilian Air Force's transport aircraft in the coming decades, ”said Jackson Schneider, President and Chief Executive Officer of Embraer Defense & Security. 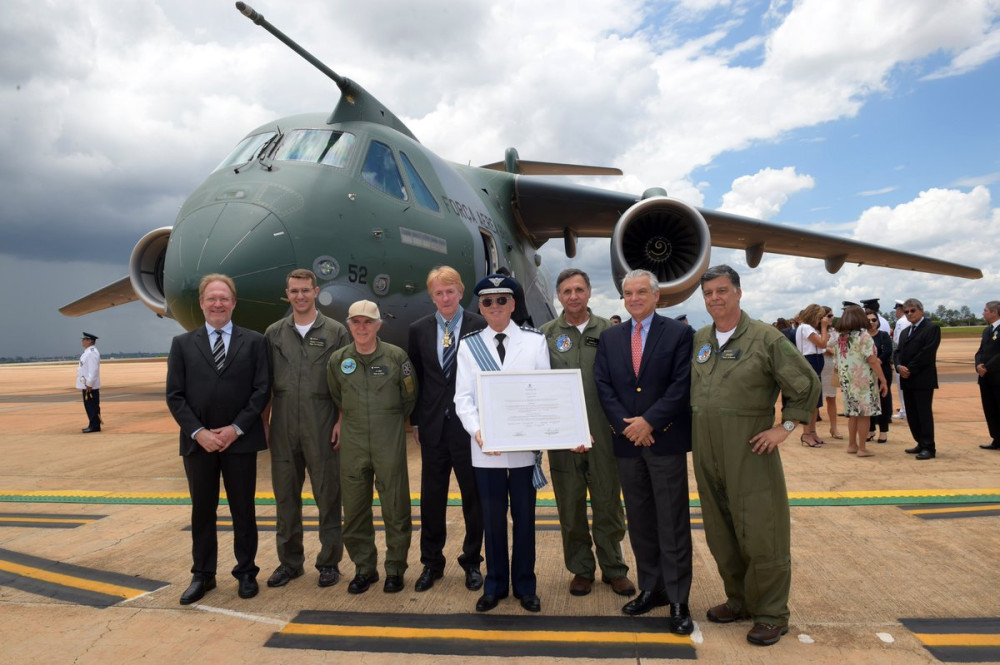 Very much an Il-276 class aircraft.

The Brazilian company Embraer reported that on July 11, 2019, the Portuguese government announced the issuance of an order for five new medium-sized military transport aircraft Embraer KC-390. The contract value is 827 million euros, including the supply of a ground-based simulator, spare parts, training and long-term technical support. Aircraft must be delivered from 2023 to 2027 at the rate of one aircraft per year. Thus, Portugal became the first foreign customer of the KS-390 aircraft.

On September 4, 2019, at the Brazilian Anapolis air base (Goias state), the Brazilian Air Force hosted the ceremony of handing over the first Embraer KC-390 transport and refueling aircraft, out of 28 planned for delivery. The transferred second serial aircraft of this type (tail number 2853, serial number 39000004) became part of the 1st Military Transport Group (1º Grupo de Transporte de Tropa - 1 ° GTT) based on Anapolis of the 2nd wing (Ala 2) of the Brazilian Air Force . The ceremony was attended by Brazilian President Jair Bolsonaru.


Recall that the KS-390 refueling aircraft has been developed by the Brazilian aircraft manufacturer Embraer since 2006 and is a ramp machine made in the class of the C-130 Hercules aircraft and claiming to replace the latter. Equipped with two International Aero Engines V2500-E5 turbofan engines, the KS-390 aircraft with a maximum take-off weight of 81 tons should carry up to 23 tons of cargo in a cargo compartment with a length of 17.75 m, and also fulfill the tasks of a refueling aircraft (maximum fuel weight up to 37.4 t). Assistance in the KS-390 project is provided by Boeing Corporation.

To date, two prototypes of the KS-390 (having completed the first flights in 2015 and 2016) and in 2018 the first production aircraft of the KS-390 (serial numbers 39000003 and 39000004), the second of the serial ones, have been built and are now transferred to the Brazilian Air Force. Under the agreements of 2010 and 2014, the Brazilian Air Force ordered a total of 28 serial KS-390 aircraft. On October 23, 2018, the KC-390 received a certificate of the type of Brazilian National Civil Aviation Agency (Agência Nacional de Aviação Civil, ANAC). Aircraft assembly is carried out at the Embraer facility in Gavian-Paixotu near Sao Paulo.

Foreign companies also participate in the KS-390 aircraft development and production program - Chilean ENAER, Argentinean Fabrica Argentina de Aviones (FAdeA), Portuguese OGMA and Czech Aero Vodochody, as well as an agreement on participation with the government of Colombia. It was assumed that the air forces of these countries will also order 32 KS-390 aircraft (Colombia - 12, Argentina, Portugal and Chile - six each, the Czech Republic - two), but so far only the Portuguese government has signed a firm contract for five CS aircraft in July 2019 -390 in the amount of 827 million euros with delivery in 2023-2027.

It is also planned to create a commercial version of the aircraft, a preliminary agreement on the purchase of six of these machines was signed in 2018 by SkyTech. 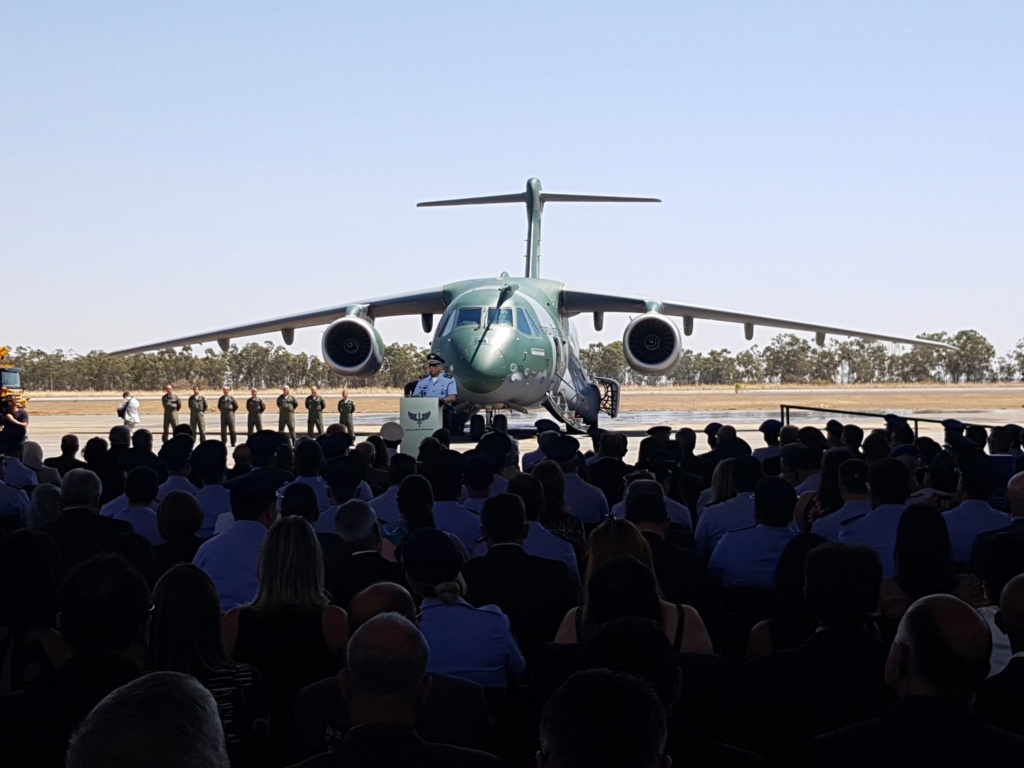 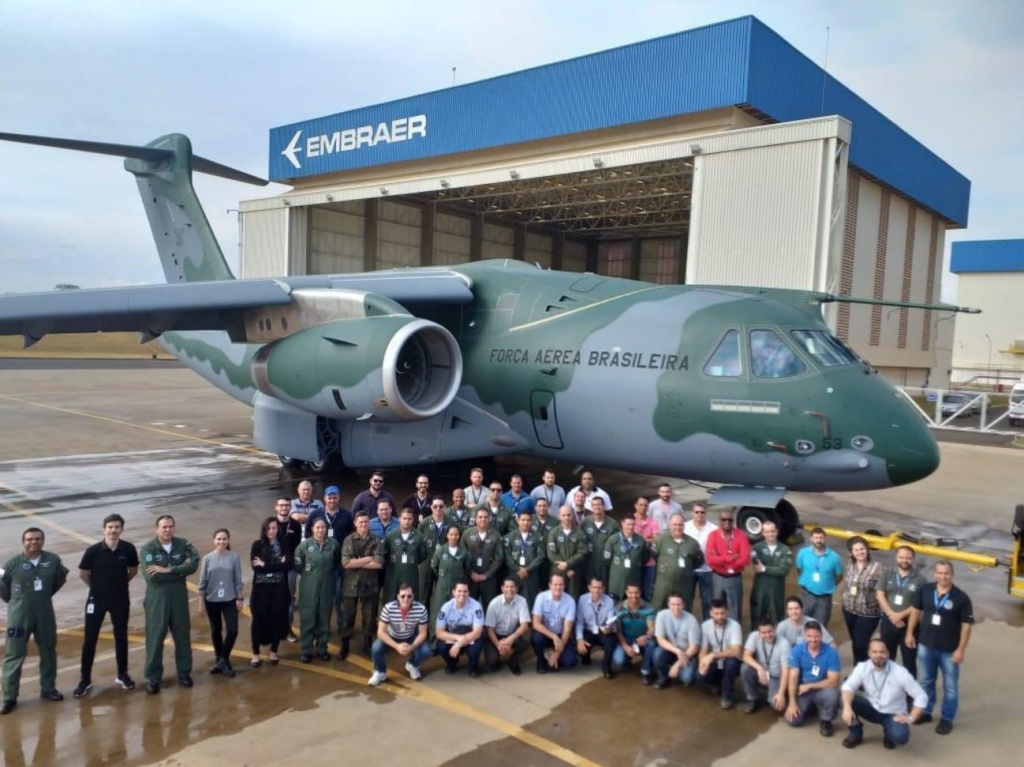