Hole wrote:It is no longer She in english. The bureaucrats declared it sexist.

I don`t mind political correctness, I have learned queen`s english, not Paki english. Let it be like that.
Hole

And her Queens government says it ist sexist to call a ship a she. Blame her.

In English inanimate objects are genderless.
Ships are only female by tradition in English, given they are also generally male in Russian a neutral term seems appropriate.
Little Kumbor pedant

Since we're being pointlessly pedantic: it's the Queen's English.
Proper nouns are always capitalised, especially the reigning monarch.

That is not true.

Inanimate objects like ships or cars or aircraft are often given genders for descriptions.

Of course now that the PC brigade are getting behind gender confused adolescence then I guess most new ships will need a fourth gender to describe them so they are not forced into being male, female or neither... they need another gender so they can take their time to decide which they are most comfortable with and are not rushed into being one or the other...

To be honest, in my experience most inanimate objects are female... it sounds natural to describe a new rifle or shotgun or car or boat or aircraft by saying she is a beauty... it does not seem right to describe them as being male...

BTW technically in theory you are correct that a car or boat or whatever has no gender and therefore shouldn't be called she... but the fact is that as a native english speaker I often refer to inanimate objects as having gender... especially when they are doing well or are a problem... note the gender doesn't change with the situation... hence if you are going to assign a gender then it makes sense to assign one that presupposes the good times and the bad... hence female
Isos

I learned that for objects or animals you need to use "it" instead of she or he.
hoom

Inanimate objects like ships or cars or aircraft are often given genders for descriptions.

You can use gender but its not technically correct.
Point is many languages eg French require everything to have an assigned gender, English isn't one.
From my understanding Russia assigns male, female or neutral gender.


I learned that for objects or animals you need to use "it" instead of she or he.

That said, this is the 22160 thread not the grammar nazi thread, how about we get back to the topic?

You can use gender but its not technically correct.

In fact some of the spellings of words in english look funny now because the pronunciation has changed but the spelling has not because of the spread of the typeset and things called dictionaries.

Common use means more than what is written in a book.... simply because languages change.
hoom

Queen's English was invoked though & so much as we have rules they apply in that case.

Language is for communication, not criticism... if you don't understand then ask for clarification... otherwise I'll say Tomato and you say Tomato...
hoom

On the morning of June 10, 2019, the Vasily Bykov patrol ship of Project 22160 from the 184th brigade of the OVR ships of the Novorossiysk naval basement went into service from Sevastopol. At the end of May, the ship arrived from Novorossiysk to prepare for the upcoming campaign. After a few days, completing the passage of the Black Sea straits, "Vasily Bykov" will be part of the Russian Navy Task Force in the far sea zone, and will also call into Tartus. In the future, the ship will make the transition to the Baltic Fleet, and at the end of July it will take part in the Main Naval Parade of the Russian Navy in Kronstadt.

For the crew this is the first combat service in the far sea zone. Together with the Vasily Bykov PC, the Velikiy Ustyug MRK of the Caspian Flotilla entered the military service.

In the photo: PC "Vasily Bykov" for the first time enters combat service from Sevastopol. June 10, 2019. The author - A. Balabin. 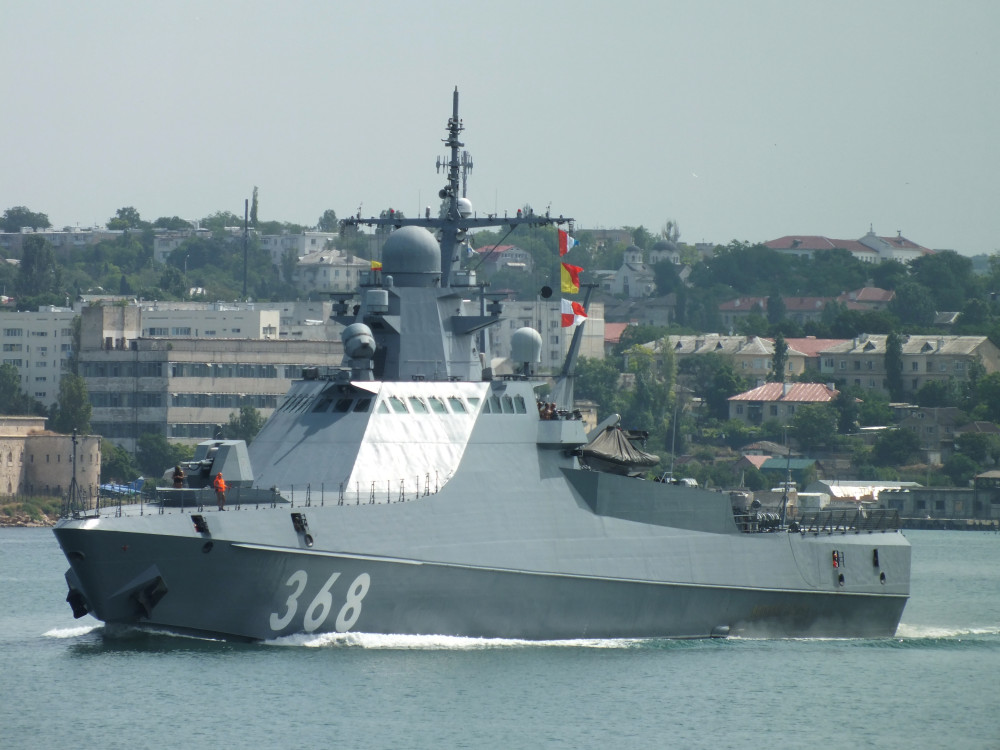 Dmitry Rogachev delivered to the Navy 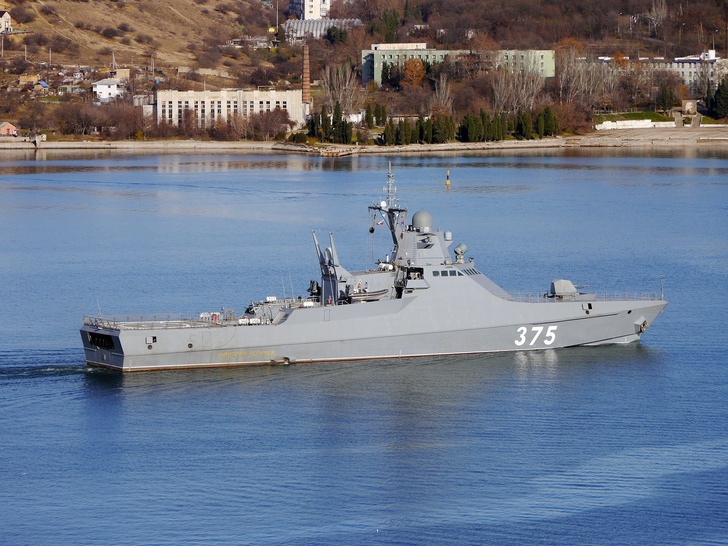 I think that confirms these are overweight.
PapaDragon

How much are they supposed to weight?

PapaDragon wrote:
How much are they supposed to weight?

PapaDragon wrote:
How much are they supposed to weight? 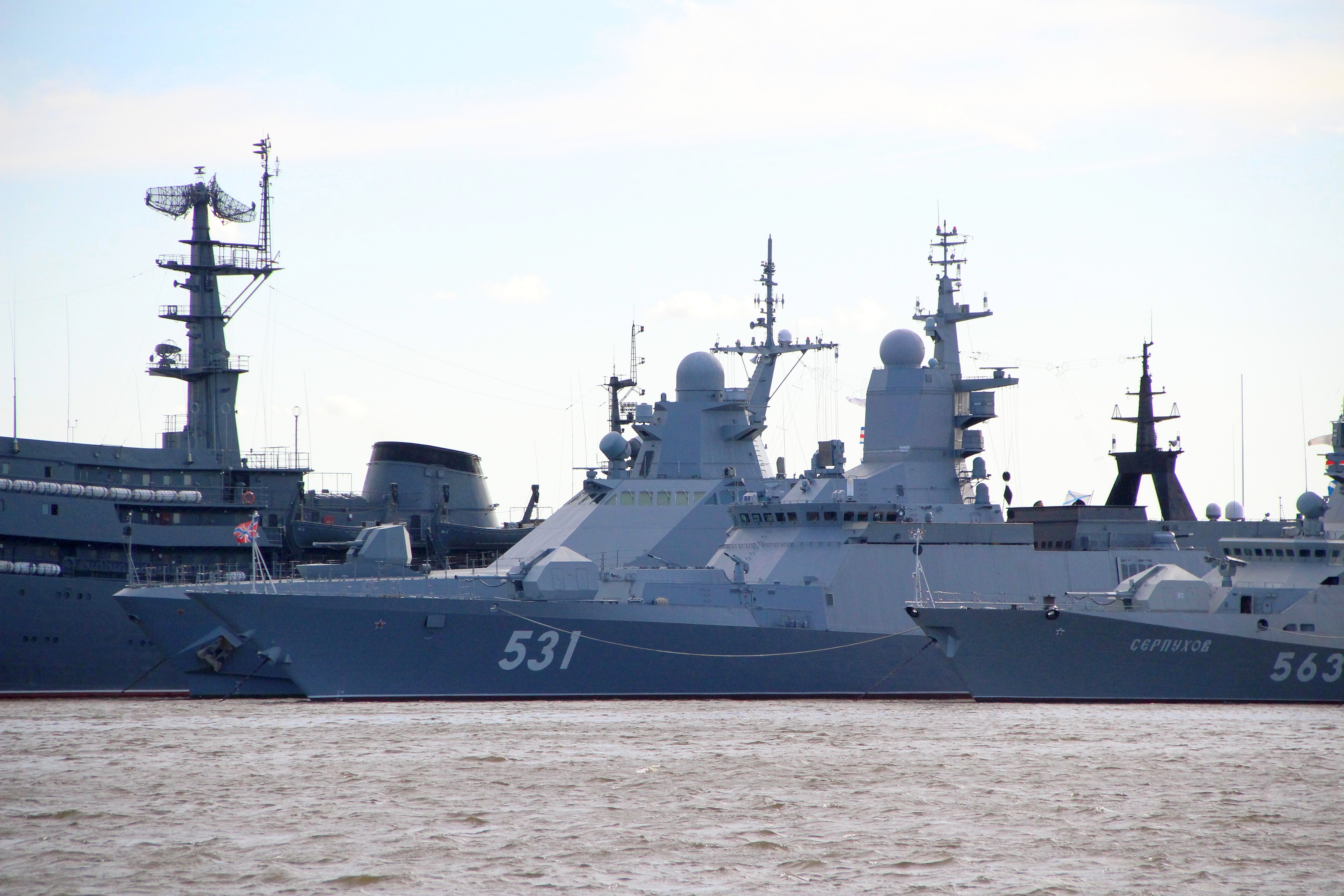 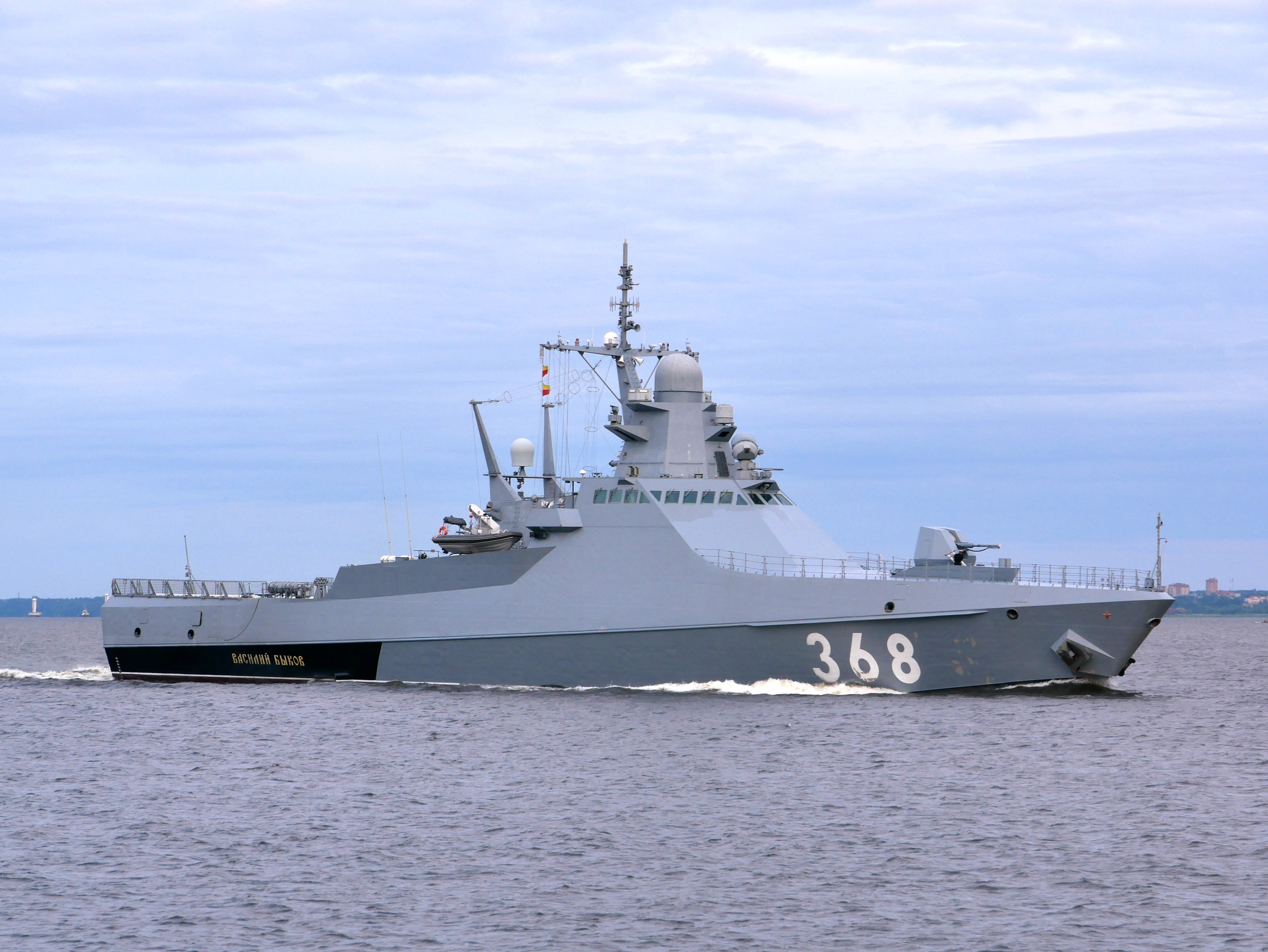 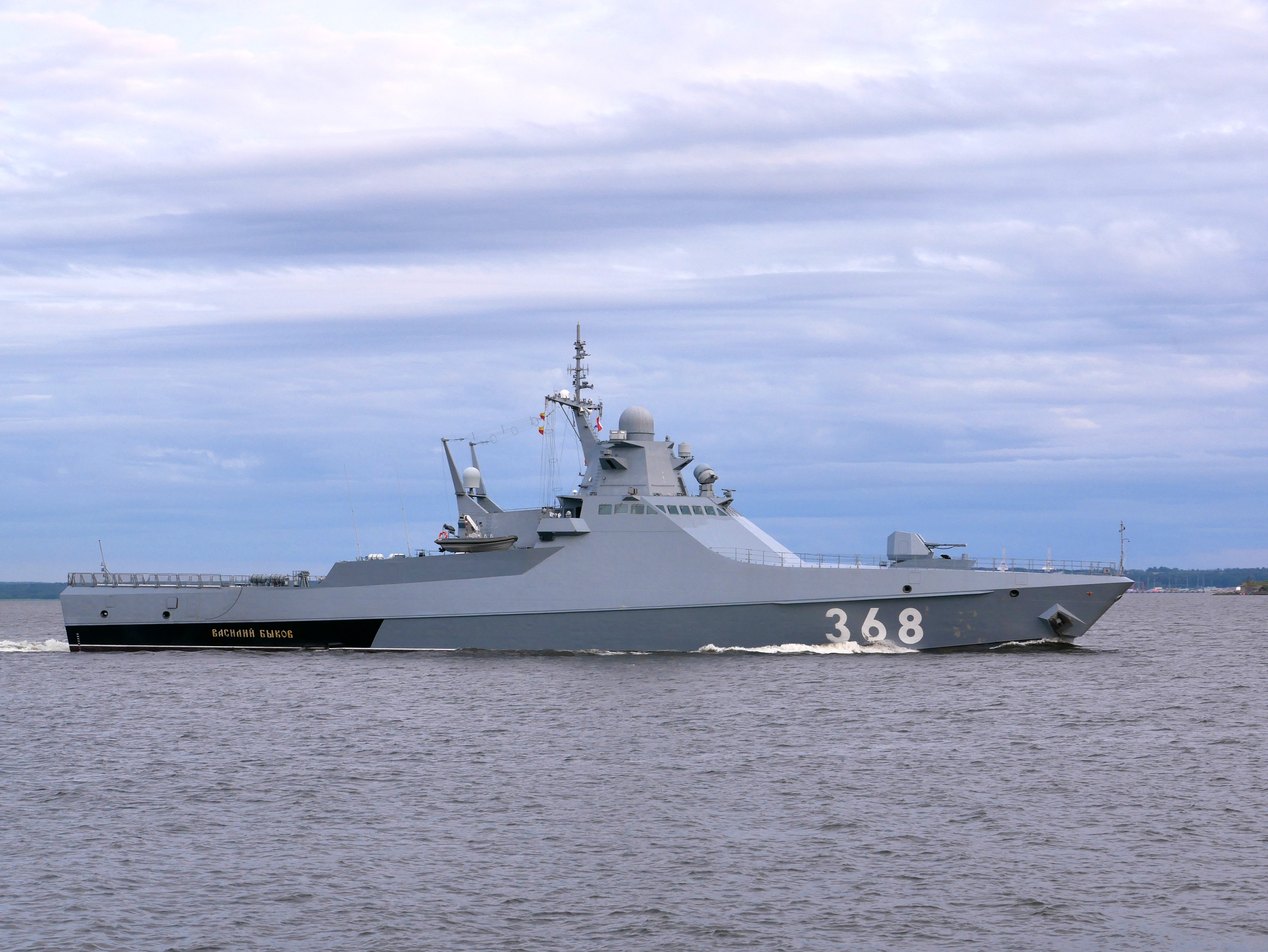 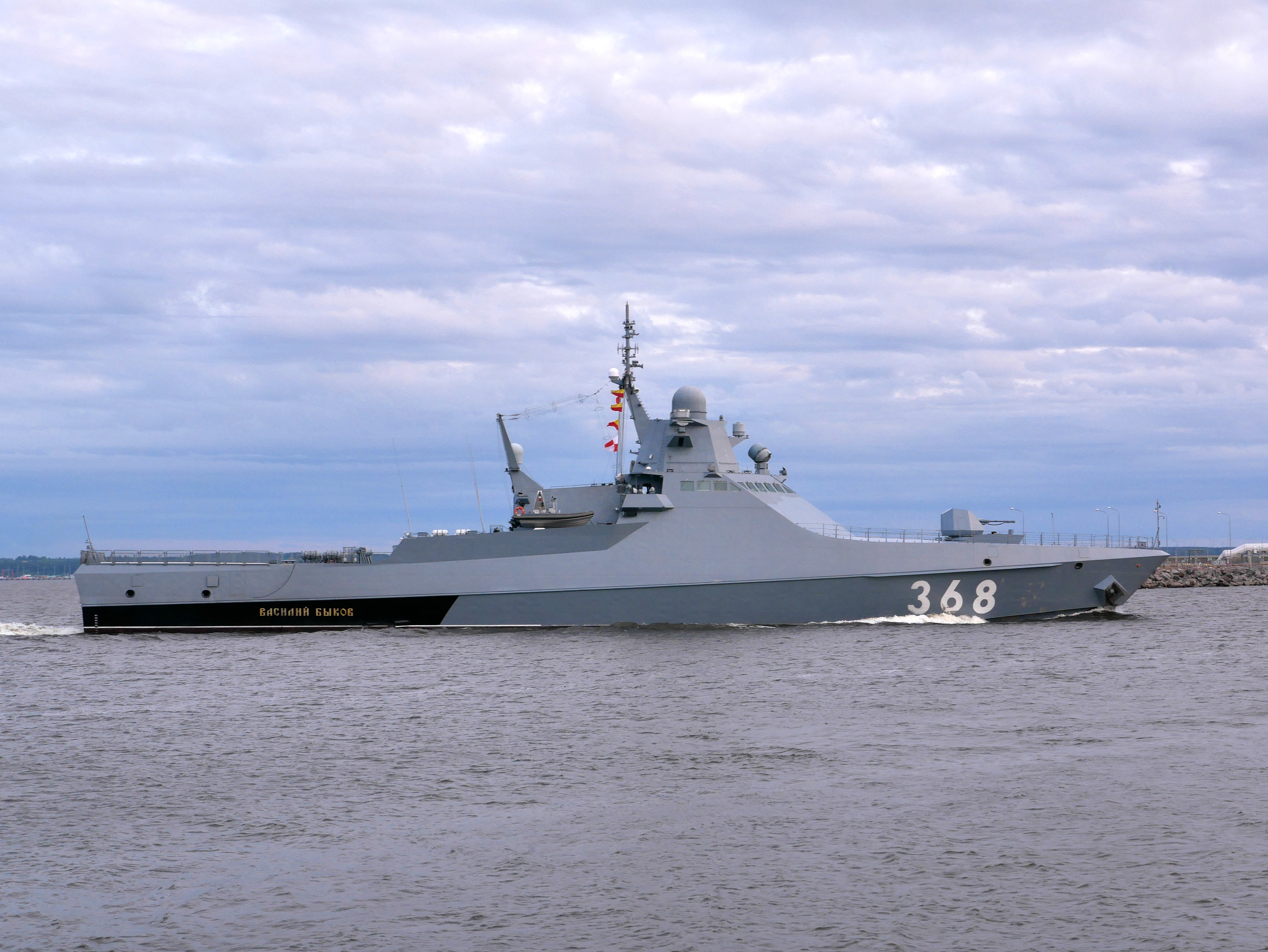 I posted this here originally:
https://www.russiadefence.net/t4650p125-border-service-and-coast-guard-of-russia#260548 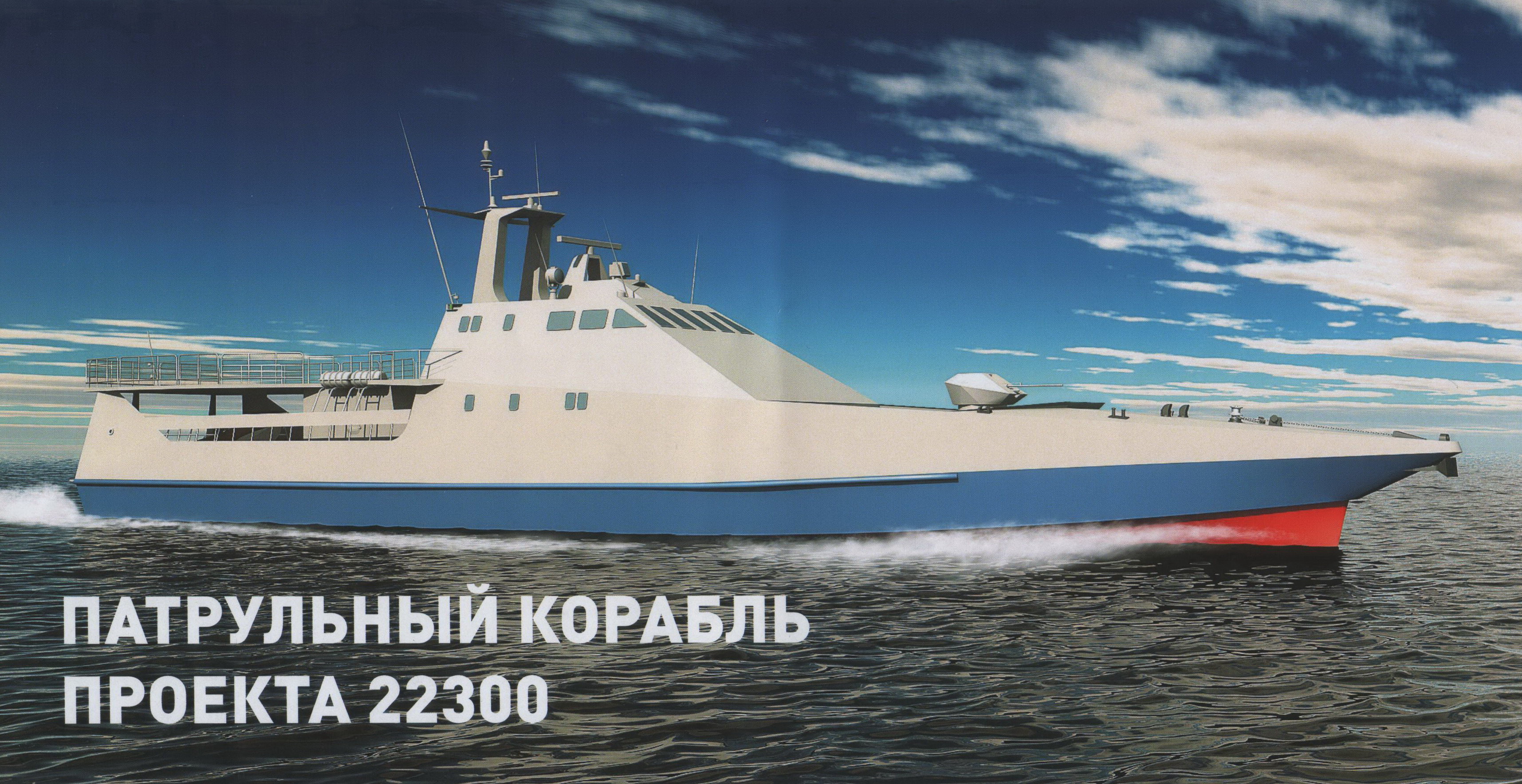 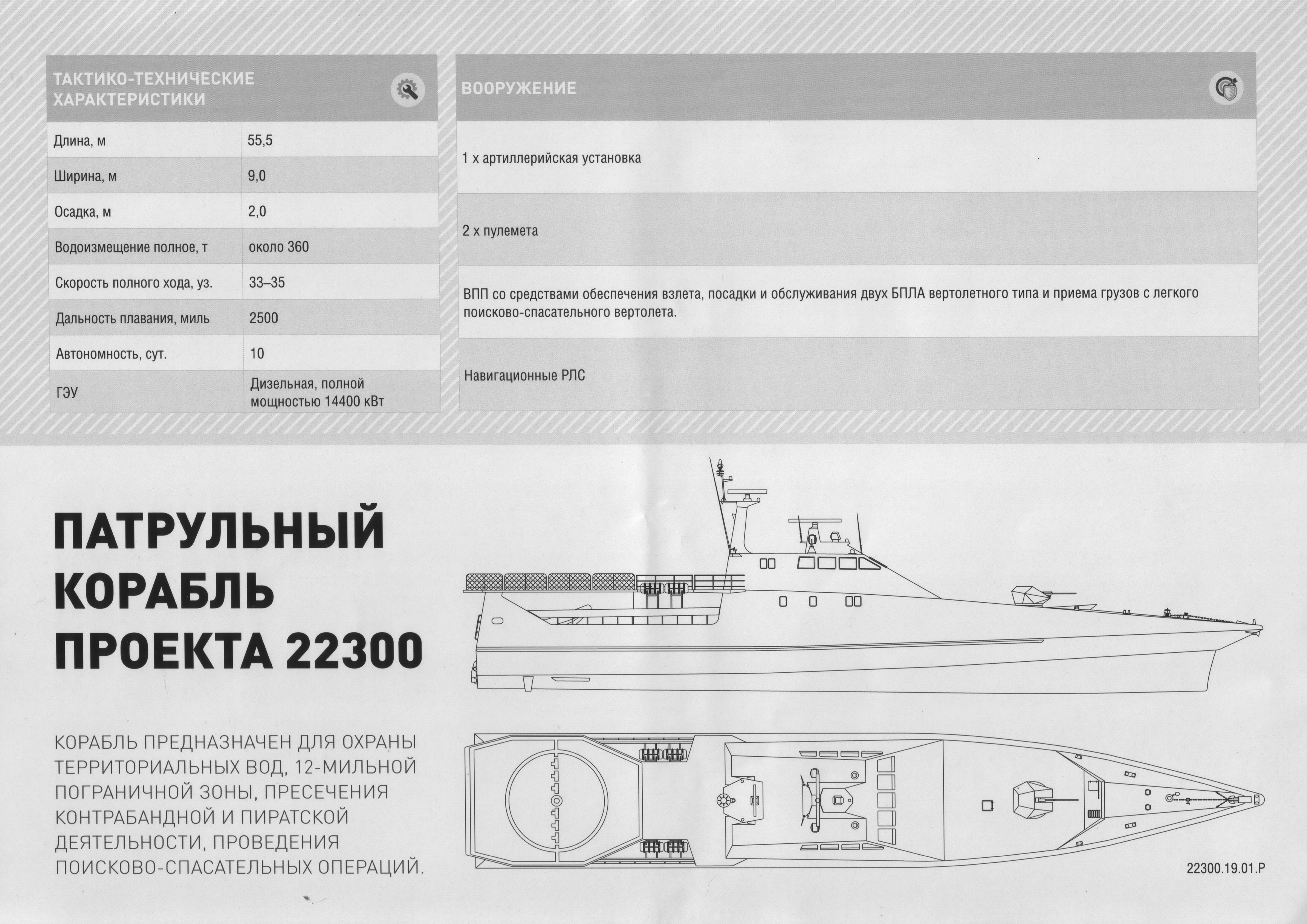 In the early 2000s there was a book called Russias Arms 2001-2002, which was a catalogue of Russian products basically with information provided by the Russian manufacturers themselves that had a lot of existing ship designs of the period. There was a follow on book called Russias Arms 2004 and they included a lot of new ship designs that very much followed this shape and they listed them in different weight classes with different configurations with different weapon options shown... the shape of the bows and the command deck and the main gun position were similar to this model... in fact the different sized boats had the same basic stealthy shape but with different sizes they had different gun options and different missile armament.

I don't remember one this small with only the one gun however, so 20 odd years of experience has altered their product range... which of course is a good thing.

Would point out that the angles are the same on all the of the drawings (not models), and they all seemed to have helicopter pads, which is interesting... most mentioned Ka-226 or Ka-27 class helos in their descriptions...
Sponsored content