Peŕrier wrote:Something flying at 5+ Mach, to perform a 45 degrees dive, would have in the first place to climb some hundreds if not thousand meters high before performing the dive, easing this way the work of interceptors.

Flying low just above sea level is key to make interception difficult, first because of clutter generated by sea surface, and second because any high -G manouvre from an intercepting missile at very low height could easily turn into the interceptor ditching itself into the sea.

AS-2 used to dive in the final course before hitting the target, and that flight pattern has been abandoned for very good reasons.

Trying to intercept a sea-skimming missile is a hell of a job even against subsonic missiles, doing against a high mach number one would be way more difficult than intercepting whatever try to dive from medium heights, no matters its speed.

Taking an unpredictable evasive course like the Iskander is still better and this seems to be the way Russian missile development is going.

Seeing it is irrelivent if you cannot hit it.
PapaDragon

Fresh one from the real world: 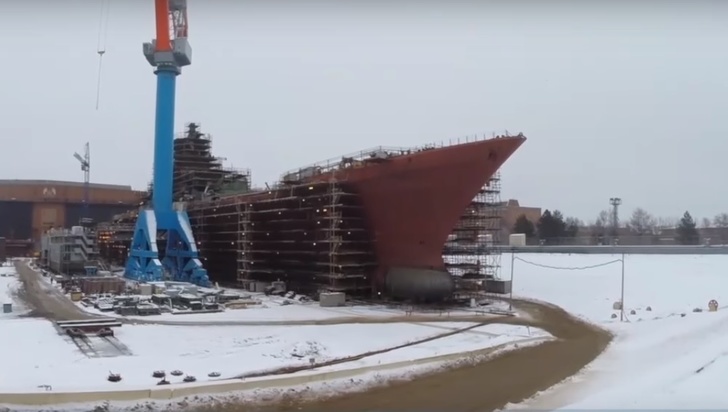 Can anyone give an analysis that weighs the advantages and disadvantages between the P-1000/P-500 and P-700? AFAIK both have salvo networking capability, both are sea skimming, both have the same speed, both have the similar ranges(except P-1000 has an advantage here). What made soviets decide to use 2 very different missiles almost analogous in capability? Was it the ability for the P-700 to be vertically launched while the P-500 couldnt?
archangelski

It's back in the water?

When is this from?
TheArmenian

This is from when they brought it to Sevmash for the major Kapremont.

Apparently there is major changes to the plan to the extent of requiring a new contract
http://www.militarynews.ru/story.asp?rid=1&nid=485479

google translate wrote: "Given the fact that the Ministry of Defense made significant changes to the terms of reference, we, in general, now need to re-sign, probably, an additional agreement and continue to work on the basis of the additions already made." I can not say anything more, "- said A. Rakhmanov on the sidelines of the industrial exhibition "Innoprom".
"Now we will understand how the amount of modernization will change, I mean already on the basis of the contract, we will continue working on it," A.Rakhmanov said

Doesn't actually say whether its more new stuff or a cutback

In context of contemplating not upgrading Moskva & apparently Poliment-Redut (which is supposed to be coming to Nakhimov) causing further delays on 22350 a cutback would seem likely.
On the other hand, money saved on Moskva could allow more for Nakhimov...
PapaDragon

Like I said before: give them one ship type that they can have and tell them to either use it or go fuck themselves

In context of contemplating not upgrading Moskva & apparently Poliment-Redut (which is supposed to be coming to Nakhimov) causing further delays on 22350 a cutback would seem likely.
On the other hand, money saved on Moskva could allow more for Nakhimov...

When did they say that Poliment-Redut was coming to Nakhimov? I was under the impression that it will get the same AA system as Peter the Great since the budget clearly included S-300FM and no mention of Poliment-Redut, only some new Dirk.

Its been variously quoted as part of the upgrade, pretty consistently in recent articles, the code for Poliment radar was part of the old component list.
I'm not sure its been actually officially stated though.
AlfaT8

Regardless, it looks like the Redut is the great "delayer" used by the shipyards now.

Honestly, someone needs to bring back "Order 227" for these Shipyards.

Actually Severnaya Verf/USC is arguing that its done all the work needed, problem is between Navy & Almaz-Antey -> Navy should take Gorshkov off its hands and fully pay for the damn thing!
kvs

hoom wrote:Actually Severnaya Verf/USC is arguing that its done all the work needed, problem is between Navy & Almaz-Antey -> Navy should take Gorshkov off its hands and fully pay for the damn thing!

You are assuming that the management at Almaz-Antey is honest and not trying to screw over the taxpayer.

Future contracts should stipulate the exact conflict resolution process. If the contractors don't want to abide, they can
go and get stuffed. Starving capitalists need your money!

Point is the shipyard isn't trying to hide behind Poliment-Redut issues.
AlfaT8

hoom wrote:Point is the shipyard isn't trying to hide behind Poliment-Redut issues.

Both parties, are probly blaming each other and demanding more money to "resolve" the problem whichever gets the money, the other gets a cut.
Everyone wins, except the the tax payer of course.

Order.227 for both of them as far as i am concerned.


The Russian Navy will receive a heavy nuclear-powered missile cruiser Admiral Nakhimov, which undergoes major overhaul with modernization at Sevmash in 2022. The general director of the enterprise, Mikhail Budnychenko, told TASS on Wednesday at the forum "Army-2018".

"Under the contract with USC in 2022, the heavy nuclear-powered missile cruiser Admiral Nakhimov should be transferred to the fleet, although there are some issues with funding, I hope, and I am even sure that they will be resolved soon," Budnichenko said.

He also said that the same-type heavy nuclear-powered cruiser "Peter the Great", which is in the combat composition of the Russian Navy, will undergo similar repairs with modernization not on Sevmash. "The cruiser will be repaired either in the center of the ship repair" Zvezdochka ", or at the Baltic plant," Budnichenko said.

Earlier, a source in the defense industry informed TASS that the work on the cruiser Admiral Nakhimov was delayed until 2022.

In the spring of 2013, a state contract was signed for the repair and modernization of the ship, which was delivered to the dry dock of Sevmash in the fall of 2014. As a result of modernization, the cruiser will have completely new tactical and technical characteristics.

So we are already ~2-3 months short of 3 years in rebuild, and looks like there is ~3 to go, assuming floated by end of 2021 for delivery in 2022.  Hmmm..  she originally took 5.5 years to build from laying down to acceptance.  I suppose its not the Soviet era anymore, and with complex ships its often harder to strip and rebuild than it is to build new.

Given that PtG is active and maintained  in good condition, its expected her upgrade will be a much less costly affair. Fingers crossed...

does it make sense to use a different shipyard to rebuild the next one?
Hole

In the videos ffrom the repair/refit you can see that replacing the weapons/electronics is the fun part. Most of the pipes and cables are replaced, which is complicated/time expensive in a completed ship, as you said.

I guess to give the job to another yard is something like a test for their modernisation/reorganisation.
mnztr

I doubt they will do many more like this. I think they want to order the Leider and the Nakhimov and PTG are to test and develop the weapons suite for Leider, and both these shipyards will be building Leiders if they prove capable..
GunshipDemocracy

mnztr wrote:does it make sense to use a different shipyard to rebuild the next one?

after completing work the first yard has experience and qualified workers and subcontractors' network. Then to change?
Hole

Maybe to give another yard the same experience.
mnztr

mnztr wrote:does it make sense to use a different shipyard to rebuild the next one?

after completing work the first yard has experience and qualified workers and subcontractors' network. Then  to change?

Hole wrote:Maybe to give another yard the same experience.

another year can start then LHA or building Gorshkov for example? IMHO mor eefficient
GunshipDemocracy

especially that this is a sort of reverse-engineering work. Not much knowledge all mechanisms is left to my guess. Then design new ones. But very likely also to test solutions used for Liders in near future.

My guess is that they have other plans for Sevmash once the Nahkimov is refloated, and they don't want to tie her up for another 4 years on PtG modernisation.
Sponsored content