According to the Yonhap News Agency, parts of the system were delivered on Monday to the Osan Air Base in Pyeongtaek, 43 miles south of Seoul.

The THAAD system has a range of over 200 kilometers (125 miles) and is designed to intercept short, medium and intermediate ballistic missiles at the terminal incoming stage. The agreement on THAAD between South Korea and the United States was reached in July 2016, spurred by North Korea's nuclear program development.

Earlier, US Department of Defense spokesman Navy Commander Gary Ross told Sputnik that Missile launches by North Korea confirmed that the decision to deploy the THAAD system to South Korea was right.

Can the U.S. defend against a North Korean missile strike?
max steel

A test of America's homeland missile defense system found a problem. Why did the Pentagon call it a success?
max steel

max steel wrote:A test of America's homeland missile defense system found a problem. Why did the Pentagon call it a success?

Any update since that article Max?
max steel

The nation’s missile-defense system has serious flaws. So why is the Pentagon moving to expand it?


HOW NSA BLIMP SPIED IN THE UNITED STATES
max steel

Well US Ground based Interceptors are not still reliable. You can read the articles I mentioned in this thread and US SAM thread to update your facts.

Rest I've few pdf's on US ABMs showing why they are unreliable backed with data and US ASW capabilities . But I can't insert pdf in this forum.

Well US Ground based Interceptors are not still reliable. You can read the articles I mentioned in this thread and US SAM thread to update your facts.

Rest I've few pdf's on US ABMs showing why they are unreliable backed with data and US ASW capabilities . But I can't insert pdf in this forum.

According to the US Department of Defense's US Missile Defense Agency, on May 30, 2017, in the next test of the Ground-based Midcourse Defense (GMD) system of the US national missile defense system, for the first time a successful kinetic interception of the GBI anti-missile target with the intercontinental Ballistic missile (ICBM). This was the first test of the GBI interceptor to intercept an ICBM simulator. 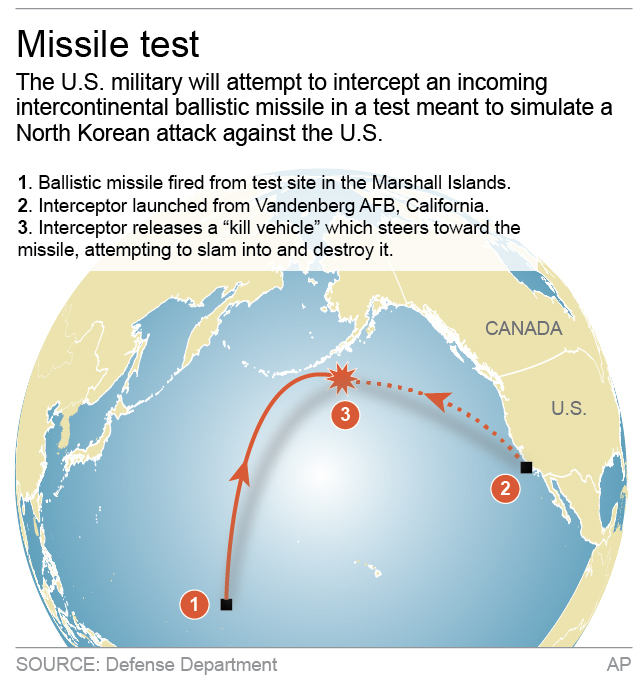 US to have over 1,000 anti-ballistic missiles by 2022 — Russian Defense Ministry

UN, October 12. /TASS/. The number of anti-ballistic missiles of the US missile defense system will top 1,000 by 2022 and will eventually surpass the number of warheads installed on Russian intercontinental ballistic missiles, a Russian Defense Ministry spokesman said on Thursday.

"According to our estimates, by 2022 the number of anti-ballistic missiles of the missile defense system will exceed 1,000, and will eventually surpass the number of warheads of Russian intercontinental ballistic missiles," Defense Ministry spokesman Alexander Yemelyanov said during the Russian-Chinese briefing on missile shield issues on the sidelines of the first committee of the UN General Assembly.

He added that this number "poses a threat for Russian deterrence capabilities, especially in the light of continuous work to modernize ABM defense systems."

"I would like to note that over 60 interceptor missile are deployed in Europe, about 150% - as part of the Asia Pacific regional segment of missile defense," he added.

In the US, the last 44th planned GBI anti-missile is deployed, another 20

As reported on November 7, 2017 by the American corporation Boeing, ahead of schedule, by the end of the year the US Defense Missile Defense Agency (MDA) of the US Department of Defense was included in the national missile defense system of the United States the last of the 44 planned ground-based GBI interceptor missiles Midcourse Defense (GMD). 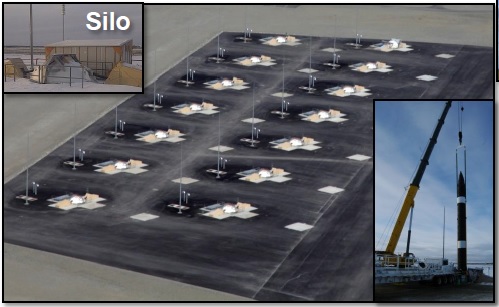 This is an interesting article about the future deployment of the GBI long range ABM system.
https://missilethreat.csis.org/future-options/

The fourth missile field at Ft Greely is already seen on Planet Labs. The construction shall be ready in Sept 2021, acc. to
https://t.co/S9WHWN17D7

The Pentagon is about to attempt what’s likely to be the most challenging test yet of the U.S. military’s ability to shoot down an incoming missile from an adversary such as North Korea or Iran


The GMD system is the sole US system designed to defend the US homeland against long-range missiles. Despite it being declared operational in 2004 and the capability accepted by Northern Command, this test, FTG-11, will be the first operational test of the system. 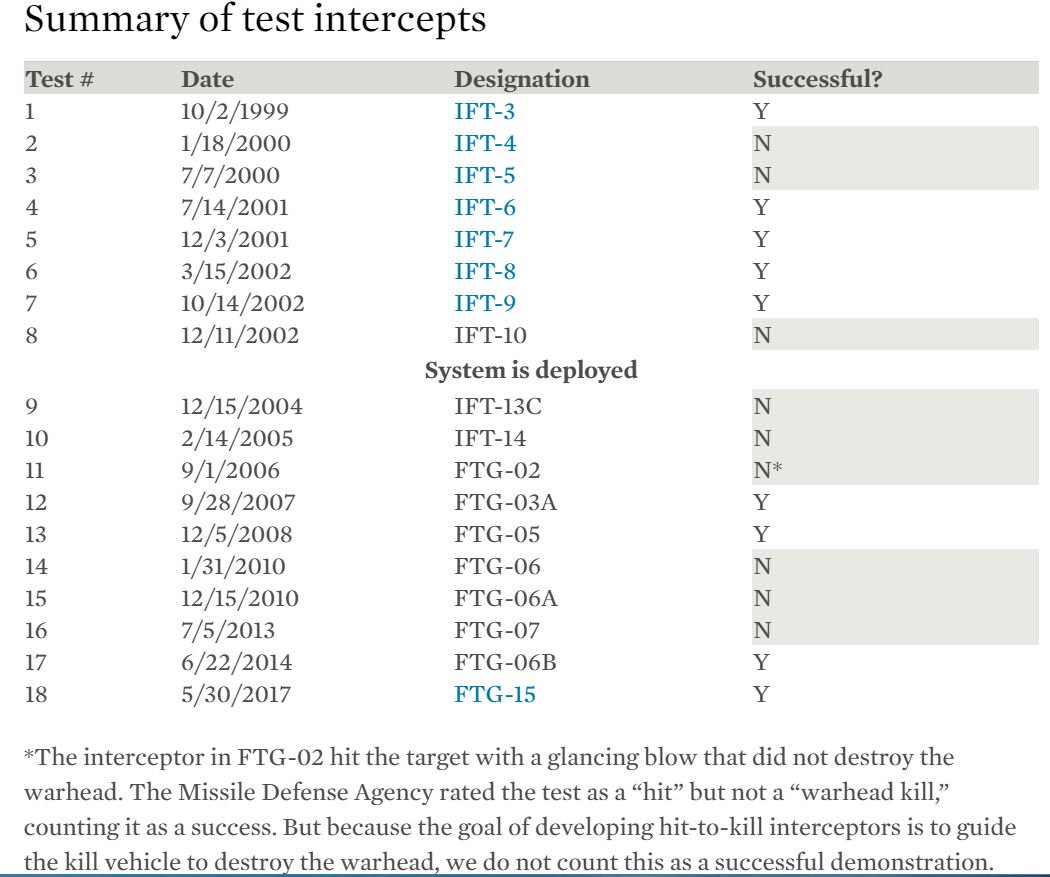 The system sucks. 50% intercepted but it's only against training missiles. With no warning, use of decoys and real BM, it will have a Pk close to 0%.
magnumcromagnon

So a failure rate of 50%, that's a failing grade in most grade books, and as already stated no real 'X-factors' were probably used.

As reported by the US Missile Defense Agency of the US Department of Defense, on March 25, 2019, for the first time, a successful kinetic interception of an intercontinental ballistic missile imitator target was conducted for the first time by the national missile defense system of the United States. (ICBM) salvo launch of two GBI interceptors. 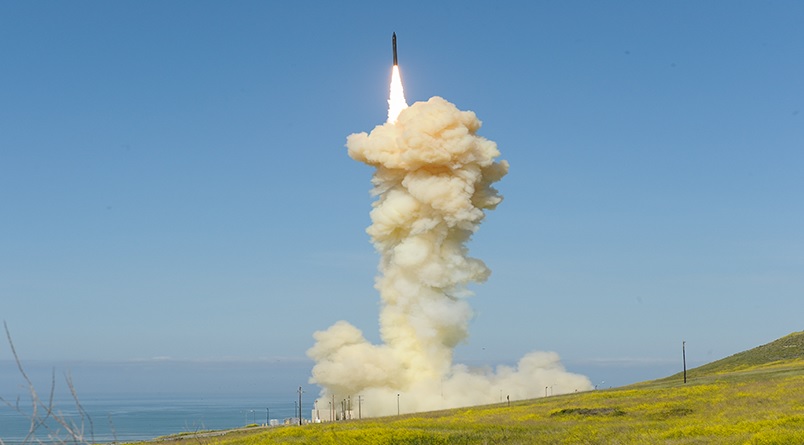 
It is reported that during the test, conventionally designated FTG-11, the launch of two GBI interceptors, conventionally designated GBI-Lead and GBI-Trail, equipped with EKV interceptors (Exo-atmospheric Kill Vehicle - modification is not reported, but, apparently, EKV CE-II Block 1) was produced from Vandenberg (California) airbase at an ICBM simulator target launched from the Kwajalein Atoll range on the Marshall Islands in the Pacific Ocean, more than 4,000 nautical miles away. The first interceptor with the GBI-Lead successfully hit the target, and then the second interceptor with the GBI-Trail struck the largest of the target fragments.

“This was the first interception with the help of GBI with a complex and threatening target in the form of an ICBM, and it was a critical milestone,” said the US Air Force Lt.-Gen. Samuel A. Greaves, Director General of the Missile Defense Agency, “the system worked exactly like was conceived, and the results of this test indicate the practical use of the salvo launch method in missile defense. The GMD system is vital to protect our homeland, and this test demonstrates that we have a reliable and effective means against a very real threat. ”

Recall that the previous test of the GMD national missile defense system was made on May 30, 2017, when the first successful kinetic interception of a GBI missile equipped with an EKV CE-II Block 1 interceptor, an ICBM simulator, was carried out.

Before the test on March 25, a total of 18 field tests of GBI interceptors with interception of ballistic targets (simulators of medium-range ballistic missiles or ICBMs) were carried out since 1999, and only ten interceptions were deemed successful.

The Missile Defense Agency (MDA) on April 24, 2020 published a request for proposals for the industry to create a promising Next-Generation Interceptor (NGI) kinetic interceptor as a warhead for the GBI anti-missile systems of ground-based Midcourse Defense (GMD) US National Missile Defense System.

Applications must be submitted by July 31 (although the possibility of extending this period due to the coronavirus pandemic is stipulated), after which it is planned to award contracts to two companies for the development of competing NGI projects. In the draft US defense budget for fiscal year 2021, $ 664.1 million was allocated for the program, and $ 4.9 billion is planned for five years.

Now GBI missiles are equipped as warheads with the kinetic interceptors of the EKV series (Exo-atmospheric Kill Vehicle manufactured by Raytheon Corporation, modifications of the EKV CE-I/CE-II/CE-II Block 1). To equip the new 20 GBI anti-ballistic missiles planned for deployment, and then replace the EKV interceptors, a program was launched in 2010 to create the new kinetic interceptor Redesigned Kill Vehicle (RKV), which was carried out by Boeing (Raytheon was the actual developer on a subcontracting basis). However, in August 2019, the RKV program was discontinued by the MDA due to the non-compliance of the results obtained during the R&D with the requirements. Now, in exchange, a program has been launched to create the “new generation NGI interceptor to counter advanced threats.” NGI interceptors should be equipped with all 64 planned GBI missiles.

However, the decision to develop a new NGI interceptor, according to American observers, postpones the deployment of an additional 20 GBI missiles approximately until 2030.