Krivak class frigates will be powered by M90FR gas turbines designed and built by Zorya-Mashproekt in Ukraine. Following the Russia-Ukraine conflict, Ukraine had stopped the supply of the engines.

New Delhi (Sputnik) — India has convinced Ukraine to provide engines that can be fitted in the improved Krivak class frigates that India is to purchase from Russia. India's Defense Minister Manohar Parrikar said that a consensus had been reached with Ukraine for power plants to be fitted in the Russian made frigates

. "Discussions started long back. The only problem was because of the Ukraine-Russia conflict as the ship's power plant is Ukrainian. Now, we will buy the power plant and fit it on the ship."

During the India-Russia annual summit held in Goa earlier this month, an inter-governmental agreement was signed wherein it was stipulated that India would buy four improved Krivak class stealth frigates from Russia. The basic structure of two frigates has already been completed in Russia, while the other two frigates will be constructed at Indian shipyards with associated technology transfer.


"All Indian equipment will be fitted on the frigate. So, it is a stealth variety where we are involved in the design," Parrikar said.


It is expected that a brief discussion on the purchase of stealth frigates will be held during the Indo-Russian Inter Governmental Commission on Military Technical Cooperation meeting scheduled for October 26 in New Delhi.

MOSCOW, June 30. /TASS/. Russia and India have specified the shipyards for building Project 11356 missile-carrying frigates intended for the Indian Navy, the press office of Russia’s Federal Service for Military and Technical Cooperation told TASS on Friday.
The relevant contract on the purchase of missile frigates from Russia may be signed this year, the press office added.

Russia and India signed a number of agreements in the military and technical sphere in October last year, including the agreements on the delivery of S-400 Triumf air defense missile systems and the construction of Project 11356 frigates for the Indian Navy.
It emerged in 2016 that Russia was in talks with India to negotiate the sale of three other Project 11356 frigates earlier intended for the Russian Black Sea Fleet. Two of them were laid down at the Yantar Shipyard on the Baltic coast in 2013.

Project 11356 warships displace about 4,000 tonnes, develop a speed of 30 knots and have a cruising capacity of 30 days. Three such warships have been built for the Russian Black Sea Fleet.

Two of the warships will be constructed at the Yantar Shipyard in Kaliningrad and the remaining two at the Goa Shipyard Limited (GSL).

To be fitted with indigenous Brahmos, surface radar, sonar and communication systems.

The Indian Navy is likely to get its first two advanced Talwar class frigates by 2022, following clearance of payments and key material procurements that will enable Russia’s Yantar Shipyard to commence full-scale work on the warship.

The contract for new frigates – two of which are to be made by Yantar Shipyard and two by Goa Shipyard – was signed in October last year and technical work on the design has commenced.

The advanced frigates will feature an indigenous surface surveillance radars, the HUMSA NG hull mounted sonar and the Brahmos anti shipping and land attack missiles. “Yantar Shipyard will deliver the two ships to the Indian Navy by 2022 as per the plans. We will also take an active part in the implementation of the next part, that is to make two more ships from scratch at the Goa shipyard. We will provide full technical assistance to the Indian yard for that,” said Efimov Eduard, general director of Yantar Shipyard. He said that advance payment for the work to commence is likely to arrive this month and the gas turbine engines that are to be fitted on the ships will be supplied by the Indian side before the end of this year. India had inked a $950 million deal in October last year for two warships to be made in Russia, followed by a $ 1.2 billion deal with Goa Shipyard for the balance two that will cost more.

The reason for higher cost of the Indian made ships is that the Yantar yard has already fabricated two hulls for an abandoned Russian order that are being transferred.

The Goa yard will also need to create infrastructure and obtain technology transfer to commence the work. As many as 22 indigenous systems have to be installed on the frigates that include navigation systems, weapons and sensors. “Based on our assessment, Goa Shipyard is ready for implementation of the contract and we will be sending our technical experts there by the end of this year or early next year to help start the project,” said Eduard. While the Russian side is confident of delivery by 2022, a lot of work is left on the two hulls at the Yantar yard that includes fitment of gas turbines, mounting of all systems and weapons and cable laying.

The procurement of the warships – termed as Project 11356 in Russia – has been in the works since 2015 and had been hit by US implemented sanctions on weapons purchases from Moscow.

India is likely to make payments for the ships using the rupee-rouble route, although a permanent way has been found.

There had been initial discussions to involve the Indian private sector to build two of the ships domestically but the government took a call to nominate the state-owned Goa Shipyard for an additional order for two. India already operates six Talwar class frigates of a similar class but the new ones on order will be more advanced versions, fitted with Indian made equipment including sensors and communications. The Russian Frigates ·

Two to be built at the Yantar shipyard in Russia, other two at the Goa Shipyard Ltd · Will add to the six Talwar class frigates already operated by the Navy ·

To be fitted with the Brahmos supersonic cruise missile system ·

The 4035 tonne vessel has a top speed of 30 knots, with an endurance of over a month at sea 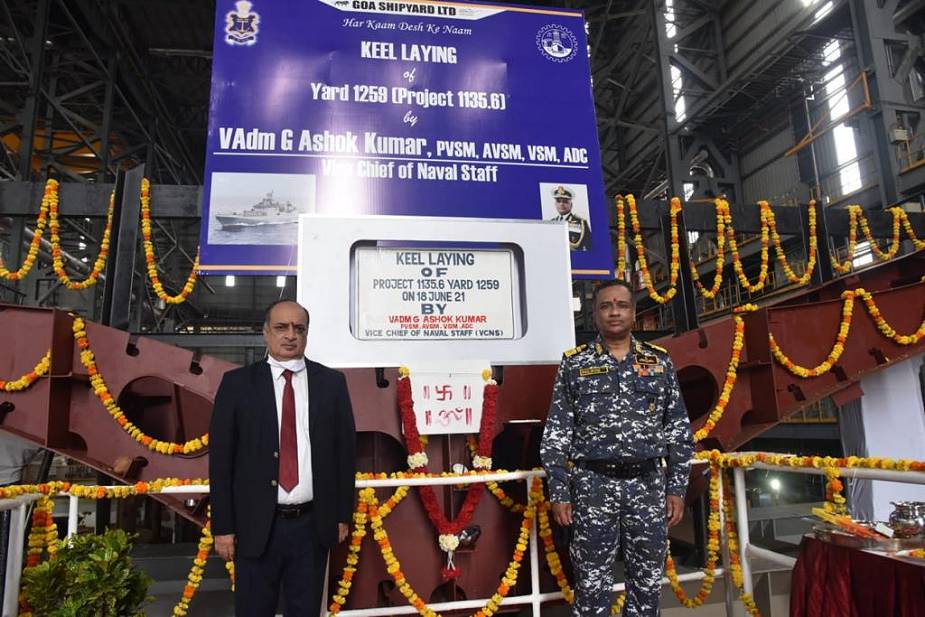 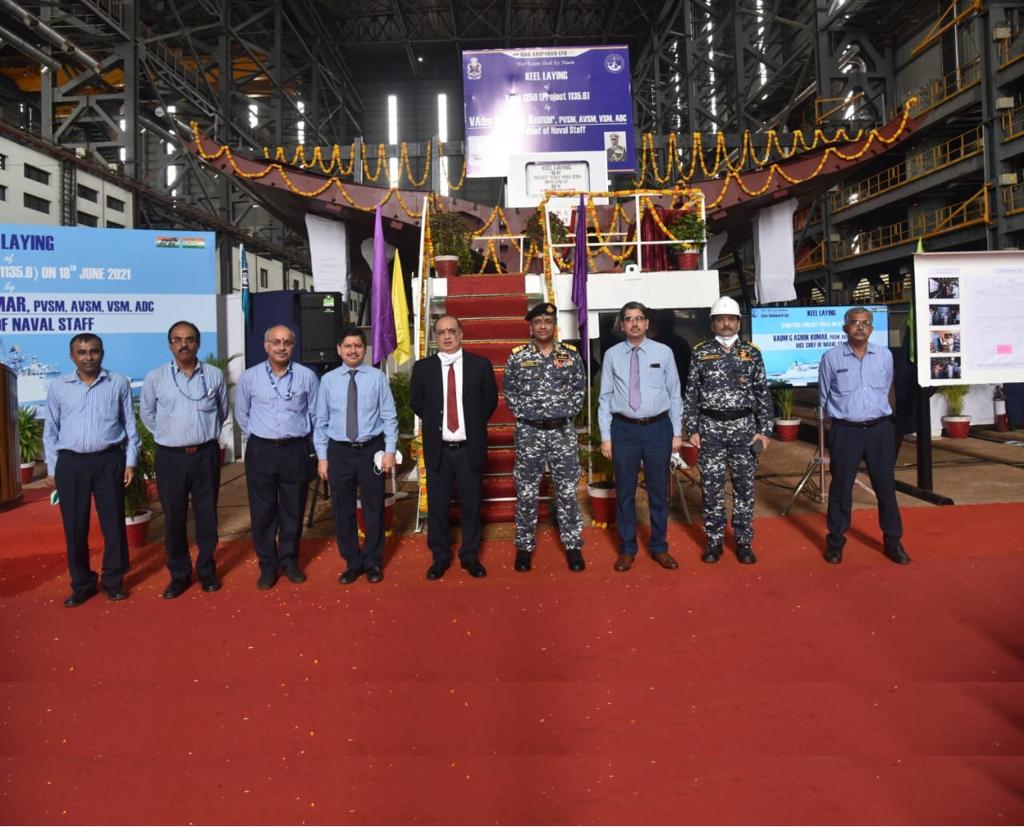 Didn´t know that the Yantar yard is in Moscow. FT!

Hole wrote:Didn´t know that the Yantar yard is in Moscow. FT!

Bad grammar in that article. Frigate was launched from Yantar. Indian Ambassador attended the ceremony virtually from Moscow. 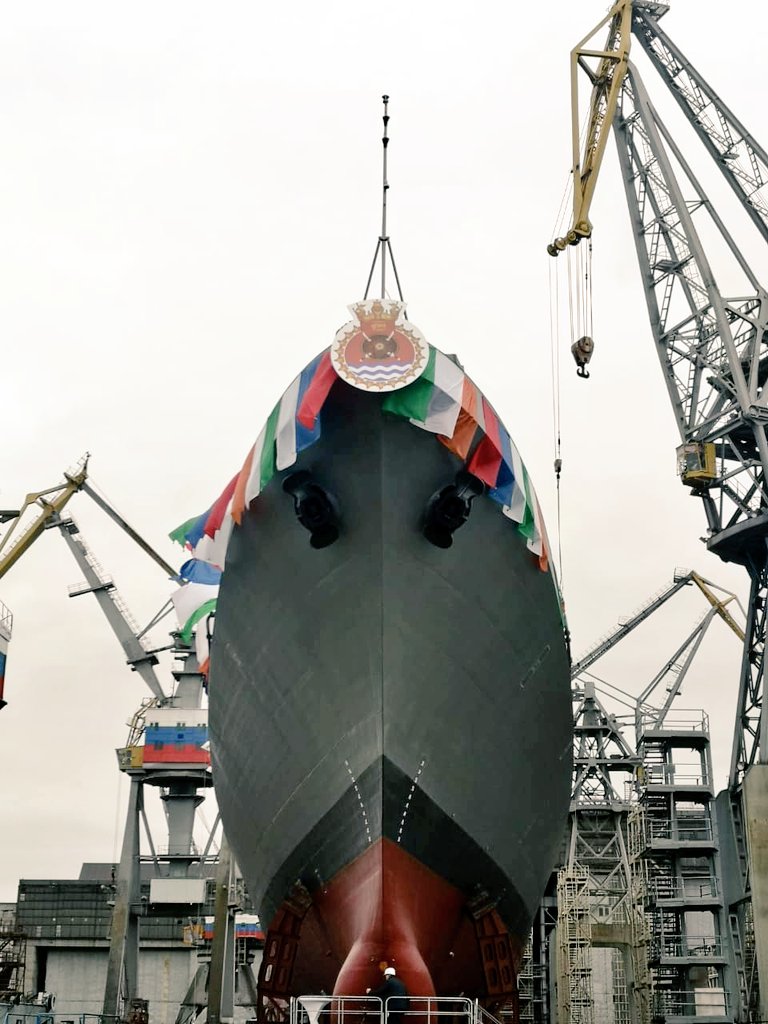 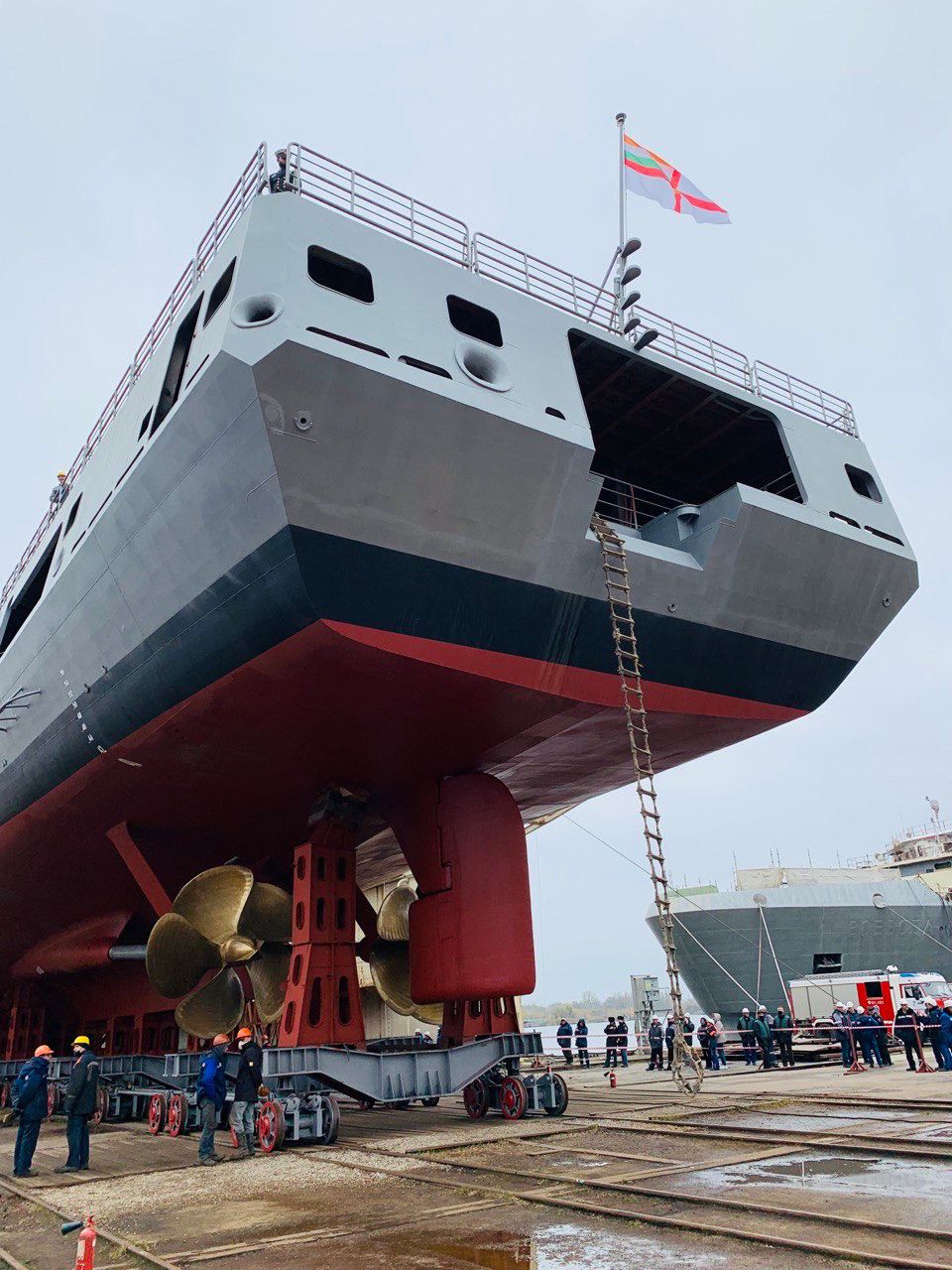 But that's for the Indian Navy? This frigate could use the VMF..
PapaDragon

Arrow wrote:But that's for the Indian Navy? This frigate could use the VMF..

Russia can't use this one, it's Indian

Is the Russian Navy going to replace the Ukranian turbines with indigenous ones on their own frigates?
hoom

Did it get clarified if the engines got delivered to Kaliningrad or they're going to have to add them after the ships get to India?
Big_Gazza

Sujoy wrote:Is the Russian Navy going to replace the Ukranian turbines with indigenous ones on their own frigates?

They will maintain currently in-service Ukropi MGTs but they won't replace them with domestic turbines. Russian MGTs will go into all new vessels. IIRC Russia has the infrastructure and supply base to maintain Ukrainian turbines and either service/repair or fabricate replacement parts for items such as blades and bearings so they can keep the existing units running.

hoom wrote:Did it get clarified if the engines got delivered to Kaliningrad or they're going to have to add them after the ships get to India?

The frigate was sent to Ukraine where it was fitted with the MGT before being sent back to Yantar.

Big_Gazza wrote:They will maintain currently in-service Ukropi MGTs but they won't replace them with domestic turbines.  Russian MGTs will go into all new vessels.  IIRC Russia has the infrastructure and supply base to maintain Ukrainian turbines and either service/repair or fabricate replacement parts for items such as blades and bearings so they can keep the existing units running.

What about Admiral Kornikov, the now under construction Grigorovich class frigate? Will it retain the MGT or will it get a Russian turbine?
Sponsored content