The war lasted In August 1939, just weeks before Hitler invaded Poland, the Soviet Union and Japan fought in the battle massive tank at the border of Mongolia, one of the largest in the world in addition to the Battle of Kursk.

Under unknown Georgy Zhukov, the Soviet won a landslide victory in the Battle of Khalkhin Gol (in Japan known as the Nomonhan Incident). This defeat makes Japan to expand into the Pacific, where they saw the United States as opposed to weaker than the Soviet Union. If Japan does not lose in Battle of Khalkhin Gol, they will probably never attacked Pearl Harbor.

Japan’s decision to expand the south meant that the Soviet East wing is secured during Wartime. Instead of having to fight on two fronts, the new Soviet General Zhukov led can focus his powers against the threat of Nazi Germany in the West.

In terms of strategic impact, Battle of Khalkhin Gol is one of the most decisive battles of World War II, but no one heard him. Why?

What causes Battle of Khalkhin Gol?

The Soviet Union and Japan are neighboring countries mutually Strong, both have ambitions to expand his power. Tensions between the two countries have not eased since Russia lost to Japan in 1905. The most Unforgettable War and painful for Russia, Entire its Baltic Fleet Navy destroyed by the Japanese Navy). Vladivostok base successfully occupied by Japan several years throughout the civil war in Russia took place.

In the 1930s, the Soviet Union under Stalin managed to revive Russian power and become a major regional rival for Japan. Japanese High Command memnfokuskan on the Soviet submarine threat and ease of Russian bombers to reach Tokyo from Vladivostok.

In the late 1930s, both Mongolia and Manchuria (Manchukuo) are two states of the Soviet and Japanese Dolls, The border between the two is very debatable. Supported Manchuria Japan stated that the boundary lies along the river Khalkhin-Gol, while Mongolia argued that the borders actually lie in the east of the village Nomonhan, about 10 km east of the river.

Although the two countries have previously started a small battle (especially in Changkufeng / Lake Khasan in 1938, a battle that resulted in more than 2,500 casualties on both sides), the battle Khalkin Goal is triggered when, on May 11, 1938, Much smaller than that cavalry Mongolia united entered the disputed area to seek pasture for their horses. They then immediately driven out by the army of Manchuria, then re Mongolian People come in large numbers, creating Manchurian troops retreated.

Conflict slowly but steadily increased until the Soviet and Japanese troops were drawn into direct conflict. On May 28, the Soviet troops to surround and destroy the Japanese reconnaissance unit. The Japanese unit, led by Lt. Col. Yaozo Azuma suffered 63% casualties in total, lost 8 officers and 97 people, plus 34 wounded.

A month after this incident to be relatively calm situation, instead of making peace accord, the two sides then tried to build strength in the region.

This calm state of collapse on June 27 due to the courage of the Japanese air strikes in the Soviet air base at Tamsak-Bulak in Mongolia. Soviet authorities unprepared for this attack and the loss of many aircraft, including those still parked (Ground), after obtaining the air strikes, the Soviets then began to analyze the strength yourself. In order mamu \ pu Japanese returned fire, if possible two x higher than the destruction caused Japan.

However, Japan’s victory was short-lived, the Imperial Japanese Army Headquarters, based in Tokyo, has not said a direct attack to the public, and was not pleased at the initiative of assault by the local commander. When news of the attack reached Tokyo, the General was very angry and immediately ordered that no further air strikes. A decision that made the Japanese warrior feet high to be paid in the future.

Although Japan decided not to give air cover support, Tokyo more than happy to allow ground operation with the goal of “Getting rid of invaders”. Lt. Gen. Michitaro Komatsubara, strategist, planning attacks be two ways to surround and destroy the Soviet army, so it will bring a glorious victory.

North Komatsubara task force then launched the first attack on July 1. After easily crosses the river Khalkhin Gol Japanese army drove the Soviets from Baintsagan Hill and quickly move to the south. Followed the next day by the south to join the task force conduct a massive attack. However, Komatsubara army was not ready, and not able to take advantage of their early success. Poor logistical planning create supply lines across the river only consists of one pontoon bridge.

Utilizing this opportunity, the Soviets under Zhukov quickly deploying 450 tanks to counterattack. Although entirely without support infrantry, they attacked the Japanese task force on three sides, and very nearly managed to surround them. On July 5, the task force of northern Japan battered and forced back across the river.

Following the failure of their first attack, Japanese forces withdraw and re-plan the next steps. Defeat is not an option for Komatsubara. After giving 2 weeks agara soldiers recover and replenish their supplies, he was planning another attack. More Brutal attack.

On July 23, supported by a massive artillery bombardment, Japan deployed two army divisions to cross the river to maintain Kawatama bridge. The days of heavy fighting took place, resulted in some progress fraction Japanese army but they were unable to break the Soviet lines and reach the bridge. Although thousands of victims fell, the battle is effectively deadlocked.

No progress further, and a drastic reduction of inventories artillery, Japan made a decision that is the better part of valor capital, regardless of plotting a third attack.

Of course, I knew about Kalkhin Gol. It was one indication of how much stronger Russia had become under Soviet rule. Whereas the Tsar's forces were beaten by both Germany and Japan, the USSR clobbered them both.

On August 28, 2019, a joint military parade of the units of the Armed Forces of the Russian Federation and Mongolia took place in the Mongolian city of Choibalsan in honor of the 80th anniversary of the Victory over Japanese militarists on the Khalkhin-Gol River.

On the Russian side, soldiers from the 37th Guards Motorized Rifle Brigade deployed in the city of Kyakhta, Republic of Buryatia, took part in the parade. The brigade personnel participated in the joint Mongolian-Russian military exercises "Selenga-2019", held at the Munch Hat training ground in the eastern aimak of Mongolia. 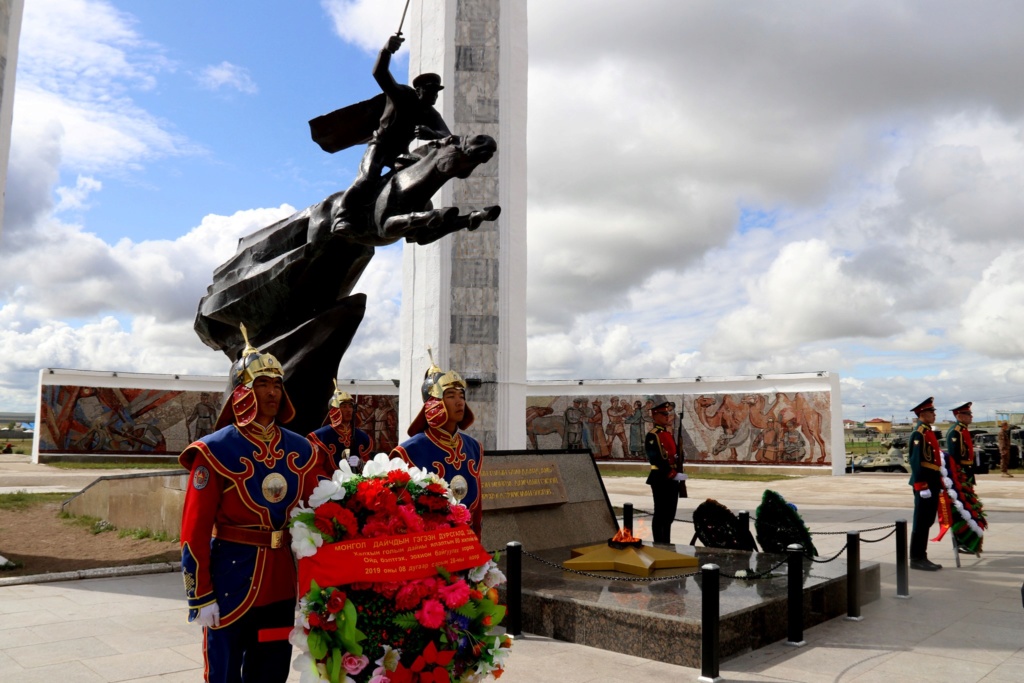 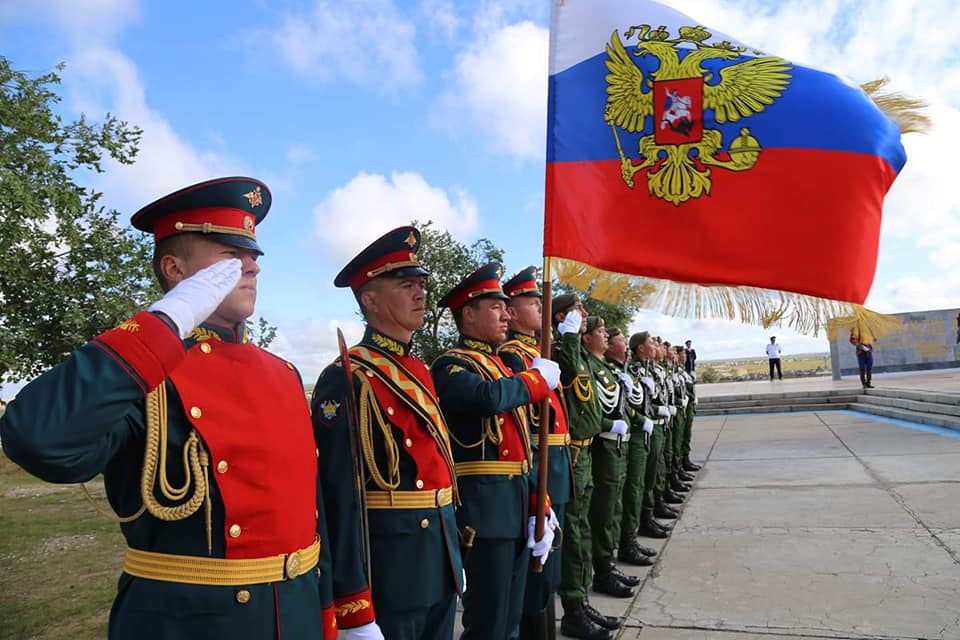 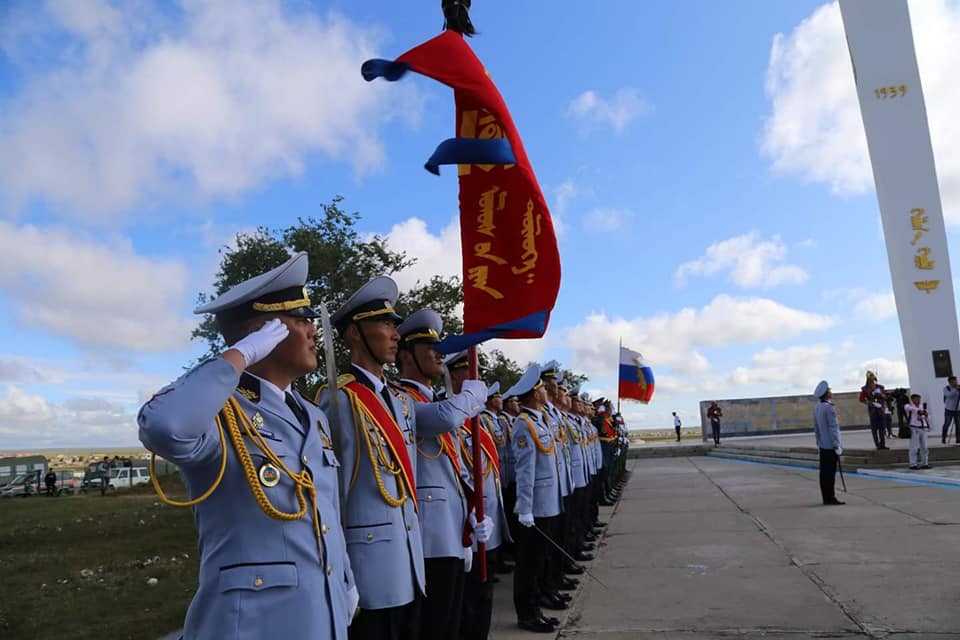 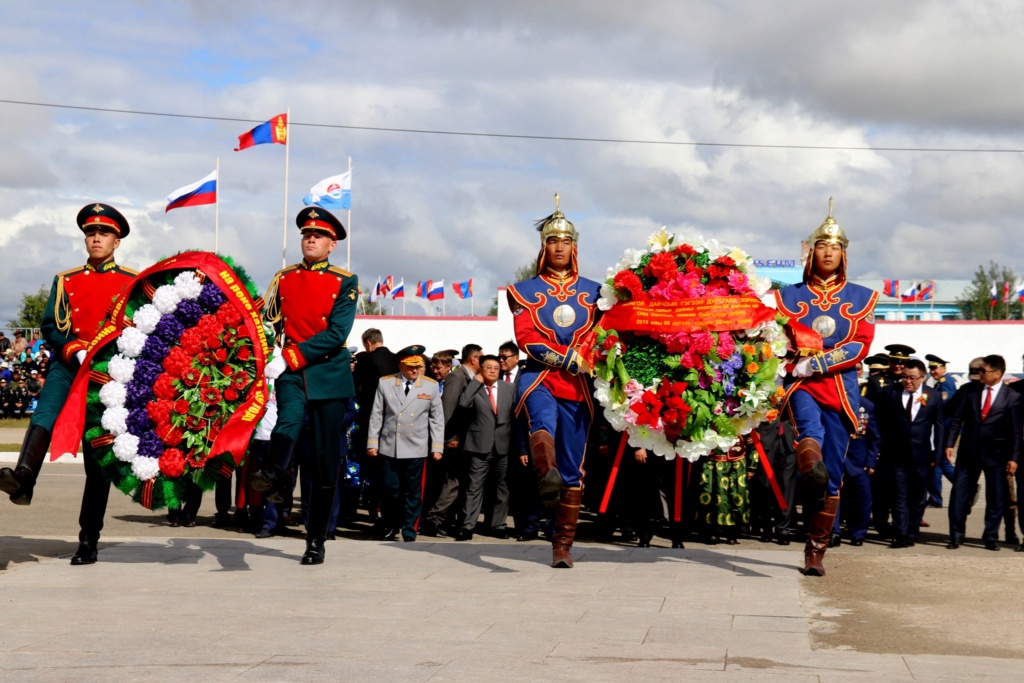 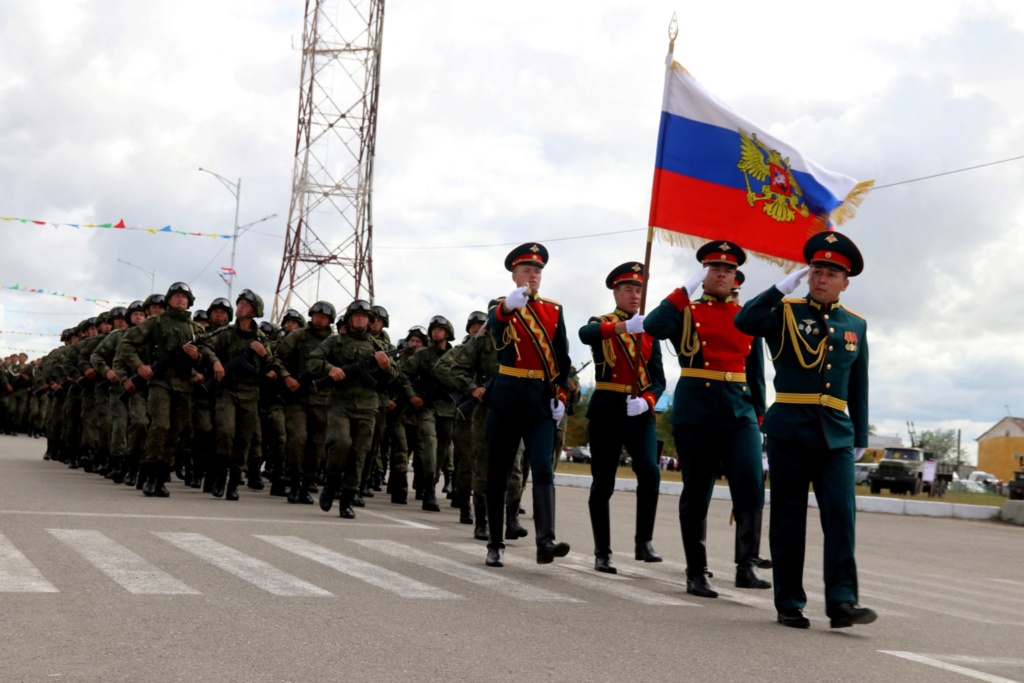 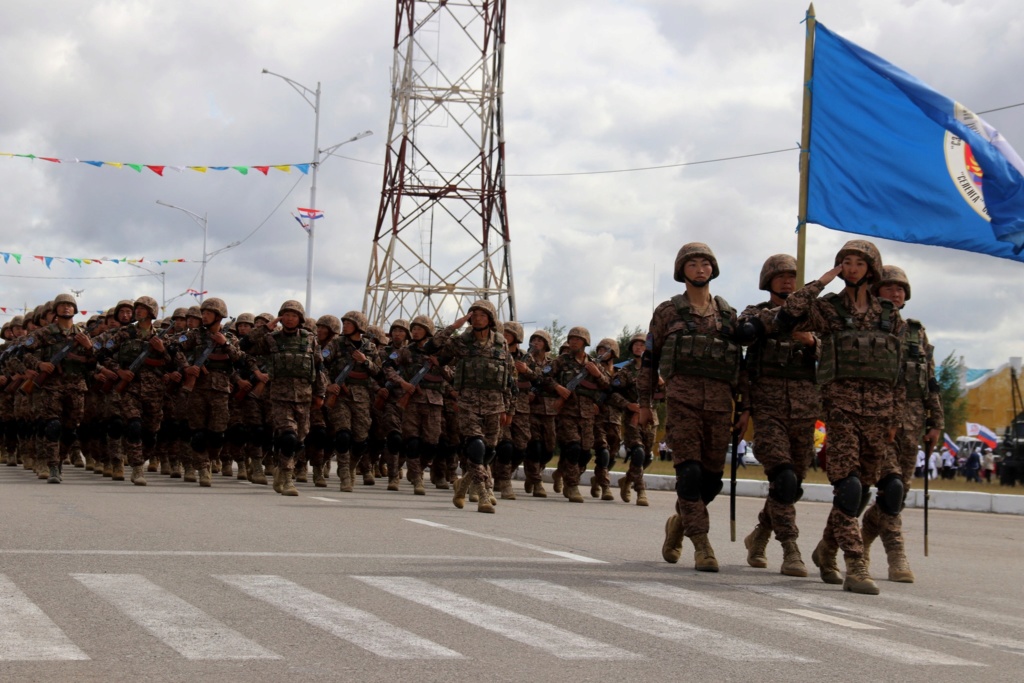 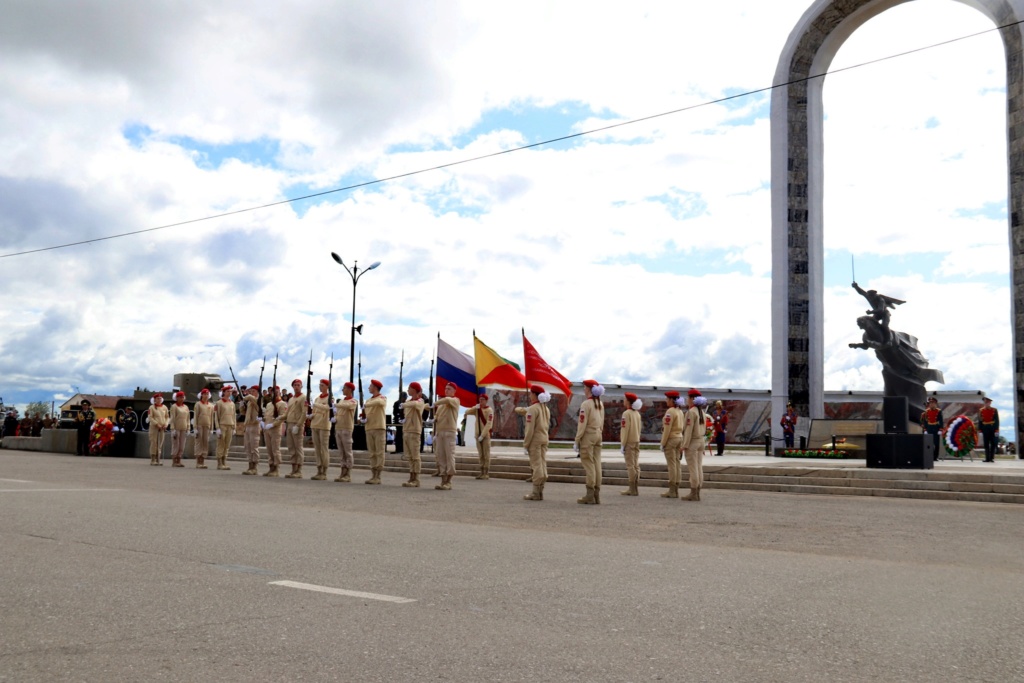 The heck are those Mongol ceremonial troops dressed up as?

Yes, for some reason we get the British view of WWII... 39-45... invasion of Poland bullshit. Ignoring the Chinese fighting the Japs in the early 1930s, or the invasion of other countries.

to Germany and made a war to restore the balance inevidable.
Sponsored content