Aren't the shipyards full which is why no new order have been issued yet (and the fact that they may come with a new design by then) ?

22350 can operate confidently far away but never alone. No frigate neither destroyer or cruiser actually can be safe alone far away from home waters. 22350 is meant to be build in big numbers contrary to potential cruisers.

Not building frigates because you have good corvettes and some fanart design of mighty 300m cruisers is stupid.

But they have tested and produced some Frigates and their decision was to make a heavier version with more weapons and presumably upgraded equipment... considering the timing perhaps with all Russian subcomponents and systems... once they have tested that out they can decide whether to make large numbers of their standard Frigate or their heavy frigate... so that will have to wait.

In the mean time make corvettes and probably focus on destroyer designs and where they might be laid down first.

No. They built some good frigates and have tweaked the design to make it better which they need to build and test before they decide which to make 30-40 of over the next 30 years.

They have 6 being built right now and will be finalising the design of the upgraded enlarged M model by next year which should be hitting the water perhaps 2028-2029 for testing.

They currently have plans for 15 of the current design... by 2030 they will probably know if they want more of the same or more of the new M model to continue production after that time.


Russia will most likely sign more contracts for the 22350's, 8 frigates clearly won't be enough for the navy and most situations aren't going to require a Super Gorshkov with 64 Zircons.

The thing is that just because the new heavier ships have 64 UKSK launch tubes does not mean they will carry 64 of anything.

Having 64 Zircons would leave you terribly vulnerable to sub attack for instance, so they might carry a dozen Ovtet missiles, and perhaps other weapons too.


Do you know which ships are used in russian/soviet navies for weapon replenishement ? I never saw pictures of such operations being done at sea.

Probably because they would never fire off an entire weapon load of missiles during an exercise, so reloading at port probably makes sense, though they practise reloading at sea of course because that is an important skill to have.

Submarine tenders and support ships are a staple part of most navies...


I would like to see them have fewer in construction & more actually completed though.

They are restocking their own fleet faster than European HATO is... and the ships they are building seem rather more capable... lets just accept that they way they do it ... works... and does not bankrupt them... and does not require them to get into debt or rely on free handouts from other countries...


How long new ships were running with non-operational systems? Wasn't that 5-year delay, to solve the interfering radars on 956s?

The Udaloys were in service long before their Dagger air defence systems were... (Naval TOR).
ALAMO

Yeah, that too.
And don't forget the Kirov, which used tons of old stuff, because new ones were not ready.
All the major combatants of the early 80s get their real functionality in the mid of a decade ...

For a lot of stuff on the Kirov it was a case of deciding what they wanted... they already had twin 130mm gun mounts on the Sovremmeny class destroyers, so the Kirov having two 100mm gun mounts was a decision that was changed for the later ships.

SS-N-15/16 type anti sub missiles were in the process of taking over from the SS-N-14 weapons too...

I remember in the early 1990s there was a huge fear that the second Kirov class ship... the Frunze... would have laser air defence system... not sure how serious western navies took this idea but the British military magazines I was getting were sure...

I suspect it was probably more to do with the fact that the Kirovs were part nuclear power and they were likely wondering what sort of weapons would justify that sort of level of power availability.
ALAMO

And I don't find anything unusual for that claims, lets remember that in the 80s, Soviets already worked intensively on laser devices, like 1K17.
And operated them already, with Terra-3 complex claimed for frying some space shuttle.
Combining massive laser projectors with nuclear power was an obvious logic.

Now it's reality. They can put Peresvet or a variant of it on larger ships that do not have nuclear propulsion themselves

There are also plans to lay down a frigate at the Severnaya Shipyard in St. Petersburg in northwestern Russia, two corvettes at the Amur Shipbuilding Plant in the Russian Far East, a mine countermeasures ship at the Sredne-Nevsky Shipyard in St. Petersburg and a medium tanker at the Nevsky Shipbuilding and Ship Repair Plant in the Leningrad Region in Russia’s northwest by the end of 2021, he added.

The most interesting news is that the old 671RTMK will be returned to service after refurbishment.

So 1 Borei, 1 Yasen, 2 Kilos and 1 Steregushy to be delivered, all new

News about another Gorshkov frigate this year is excellent, I already thought they would not start any more after they skipped it during summer

Also second Neustrashimy frigate is finally coming back in service, this is great (fact that they had perfectly good frigate just sitting there wasting away was really irking me)

Plus another Akula coming back as well

This is looking really nice, loving the progress

Arrow wrote:The most interesting news is that the old 671RTMK will be returned to service after refurbishment.

It is still a capable sub, not worse than half of the others sailing. Maybe it has some resurse left and can be easily refurbished and put back to operational status, who knows.

PapaDragon wrote:
This is looking really nice, loving the progress

And we are still talking about a country with military spending on pair with France and UK, I remind you.
Hole

And we are still talking about a country with military spending on pair with France and UK, I remind you.

Kinda proves the point that people such as myself and KVS have been saying for a few years now - that budget doesn't mean everything. Russian economy with PPP take into consideration never took into consideration of defense industry which would make the PPP look much larger too. Since they can build in competition to the most rich European countries and upwards to the US in building military equipment, with a budget fractions of them.

The point is that they are getting very good value for money.

The Victor IIIs were rather good for their generation, but the point is that scrapping that sub wont free up a huge amount of money and it is not like scrapping this boat will enable them to instantly get a brand new boat to replace it.

For a minor monetary outlay they get a sub in the water... not every job requires state of the art super subs... in fact one thing they could use it for is exploring places they don't normally go... sailing around the UK for a bit and get their media demanding to know why they have such weak anti sub forces and lack a navy that can send some carriers to harass China but don't have enough ships to defend home waters.

They wanted to build 12 new destroyers and ended up only getting 6... if the Russians said that several members would go crazy... and I would say rightly so... if Russia wants to develop then they need more than just 6 new ships that can't even match the performance of the new Russian Frigates let alone their planned upgraded heavy frigates.

Of course the British are in a worse situation because their 6 destroyers are essentially armed like a Russian Frigate, so they are going to be at a serious disadvantage against heavy Russian Frigates and indeed their destroyers going forward and that is not even mentioning any Cruisers they might eventually lay down...

I wonder if Britain might piggy back a few orders for this new Australian Sub they are going to help build just to get their sub numbers up... I would suggest the Aussies might follow a budget better than the Americans so maybe even America might buy some...

Arrow wrote:The most interesting news is that the old 671RTMK will be returned to service after refurbishment.

It is still a capable sub, not worse than half of the others sailing. Maybe it has some resurse left and can be easily refurbished and put back to operational status, who knows....

Oh I'd say it has more than plenty of resources left:


...Commissioned in 1993, she entered service in a post-Soviet period when the Northern Fleet’s ships mostly stayed in port.

From 1993 till 1997 Tambov was only sailing four patrols, according to rusnavy.com, a portal keeping historical tracks of individual Russian navy vessels.

In 2015, the submarine was transferred from active duty to the Nerpa shipyard north of Murmansk on the Kola Peninsula. ...

This is like buying a new car, taking it for a spin several times and then leaving it in a garage for 15 years, needs fluids change and a tune up but it still works just fine

Here's a photo from 2019 I swiped of spacebattles.net: 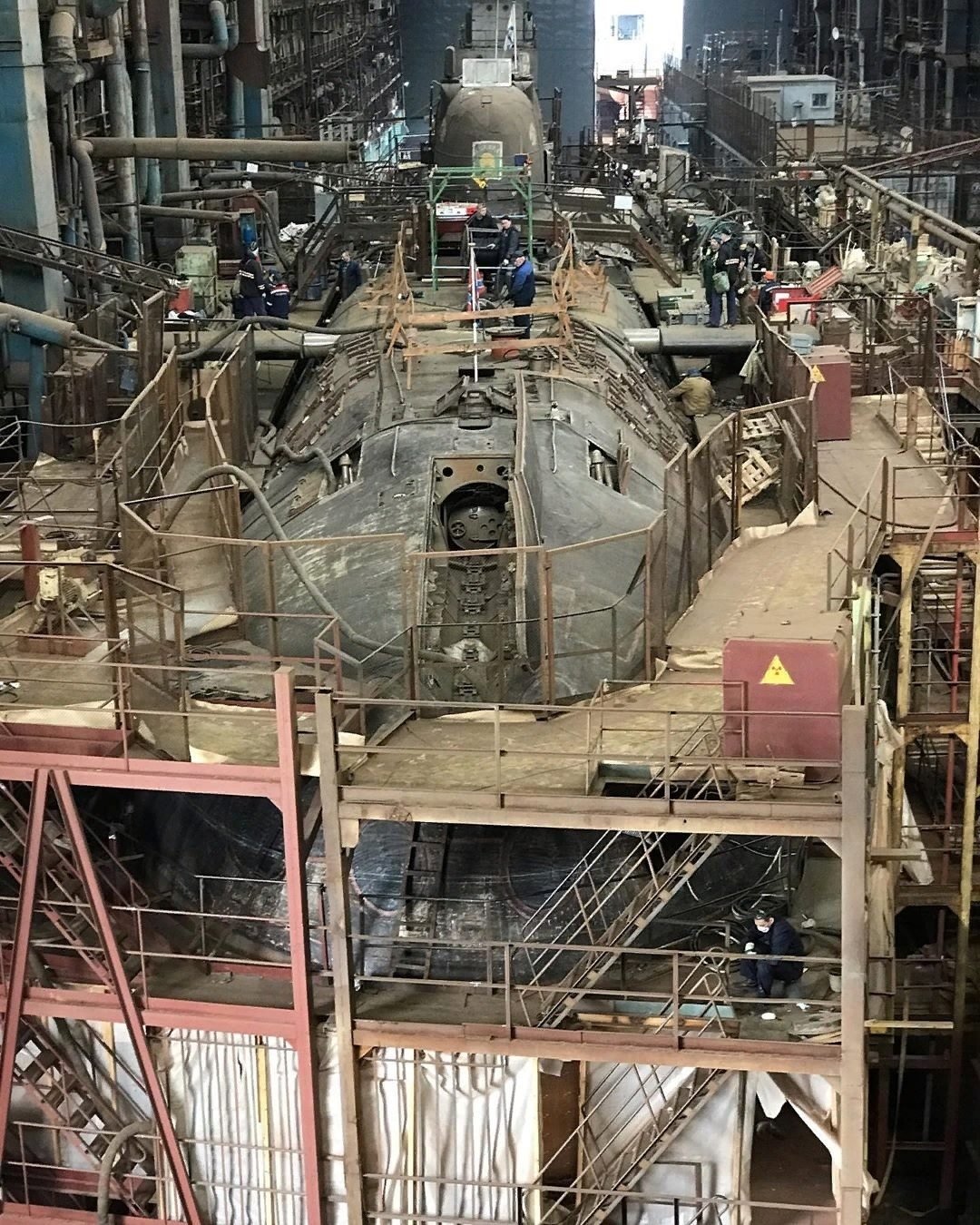 Victor class is a successful class. They had 48 sub in total. I think it is the mostly build class in soviet union. They have still 3 of them around.

India should buy them to upgraded standard. That would be perfect for them.

I agree, they would be a good sub to get experience with... and could still be quite effective if you weren't trying to sink HATO subs, which I presume India are not going to want to do.

I would expect an electronics upgrade and communications upgrade similar to their in service Victor IIIs would make it rather better than any previous model Victor could be expected to be.... just the new torpedos and weapons would make it a better sub on its own.
Sponsored content