Who the f is this?

calm wrote:On this day there is no East or West Aleppo. Only Aleppo.

Peto Lucem is celebrating harder than anyone else, poor guy has been worked to death lately...

One of the bloodiest and most crucial battles of this war has finally ended. A decisive victory for the #SAA and #Syria's allies. #Aleppo 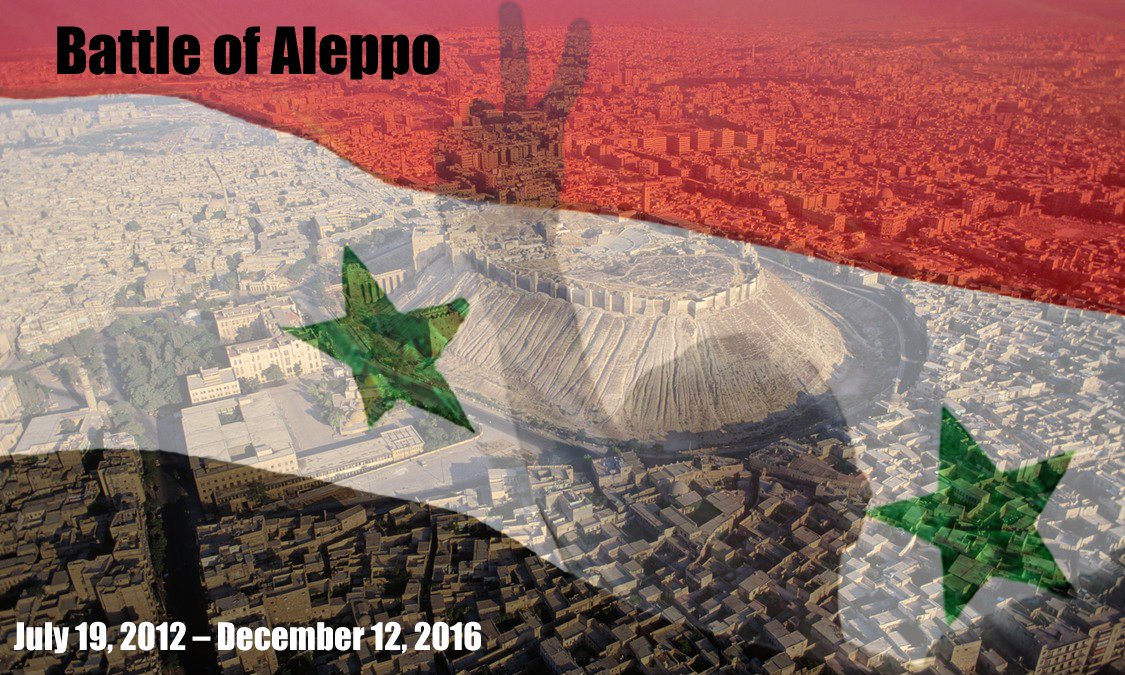 Looks like the foreign SF advisors trapped in Aleppo were either long gone or a myth.
calm

North West Syria as of 12th of the 12th. A very important day for Syria from this point onward.

From 3 days ago but it shows the scale of the task still left. At least much of it is fairly empty.

Even after successful Eastern #Aleppo campaign, #SyrianArmy troops control only 14% of the greater #Aleppo region. 2017 will be a busy year. 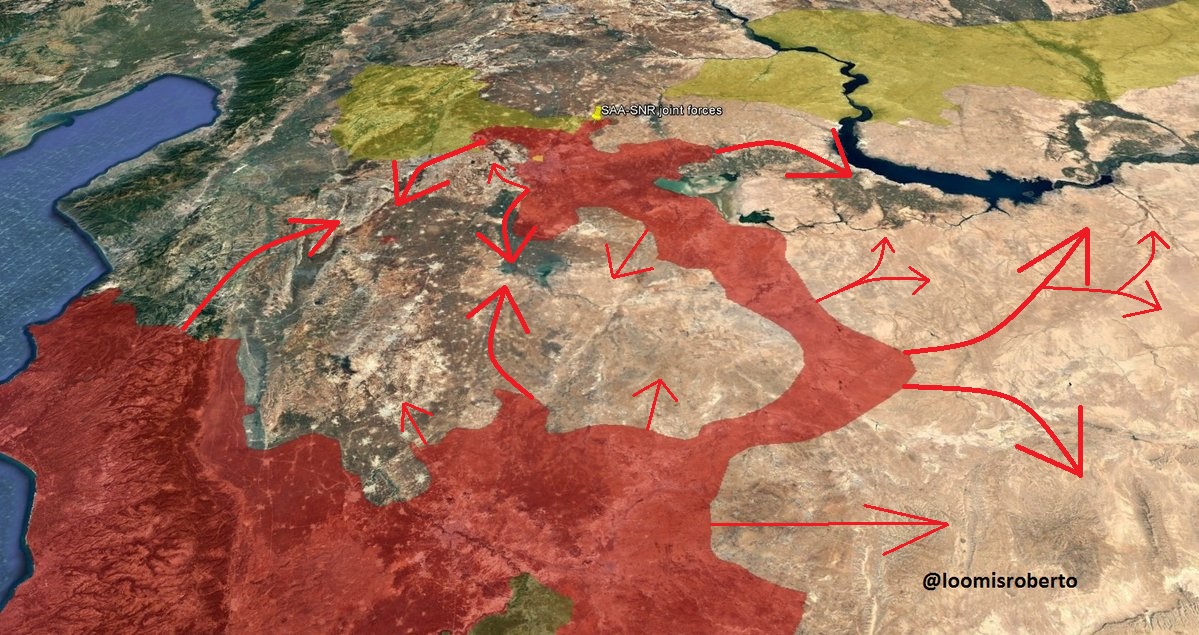 calm wrote:On this day there is no East or West Aleppo. Only Aleppo.

This is the most important victory in Syria and the best Christmas present for Syrian people.
PapaDragon

It's official I guess:

George1 wrote:after Allepo wthat will be the next big target?

IMO Idlib, believe the decision to focus on the Western half of Syria was made a while back and is the correct one. Expect the main attack to be along the M5 and route 60 axis towards Idlib city and the besieged towns of Al Fu'ah & Kafarya.
- Expect secondary attacks up highway M5 from Hama and from Latakia on the west along the M4 highway axis. Even if unsuccessful, will tie up valuable rebel resources.
- East Ghouta / Yarmouk operations to continue once the situation is stabilized in Palmyra
- planned operations in Quneitra / Da'ra to continue once Palmyra is stabilized
- expect forces to be sent to reconquer Palmyra
- further expect any operations against ISIS to depend on ISIS. The Russians are strongly suggesting that the Palmyra action is on the behest of the Americans and their Arab Allies... suspect the same. I disagree in the purpose being to try and save Aleppo unless Washington is not listening to it's military people again... saving Aleppo was a dead horse. It's to tie up Syrian forces to prevent operations against Idlib and Dar'a, the last main Rebel strongholds.
- expect finishing off Aleppo will free up about 20,000 troops for the Syrians and about 2,000 for the YPK (Sheikh Maqsoud)
calm

FSA source in Aleppo "The rebels in Aleppo request a Fatwa from scholars to permit them to kill their wives so they don't get raped"
Crazy fools.
https://twitter.com/jaberalharmi/status/808393506742009857
franco

Palmyra's loss was a shock to me. Despite this, its a good target for RuAF, in this war you should hit militants and not hold ground.
What worries me is that SAA is concentrated in a small strip of land, going to the wilderness is difficult. From now on progress in difficult.
JohninMK

Sorry about it being in French 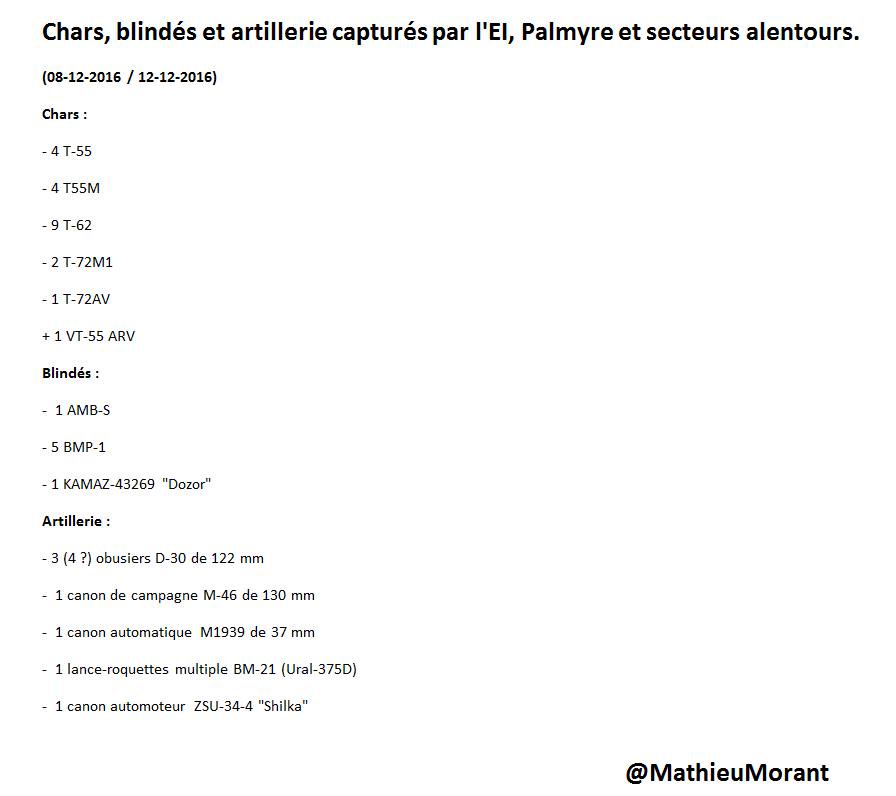 1-#Aleppo Recap: It was July 22, 2012 when armed men penetrated from surrounding villages and took over what later became known as E #Aleppo

2-If this was any other country in the world, public opinion would have been alarmed about armed groups shooting their way into such a city

3-But this was not any other country. Barely a year into the crisis but public opinion had no problem white washing what had just happened

6-Since the very beginning, water was cut off by the rebels on the entire city. Barely anyone said a word. Most ignored & looked other way

7-Throughout #Aleppo ordeal, residents in what became known as Western part wondered why #Damascus refused to respond to armed groups

9-When Idlib fell in march 2015, those fears intensified. It was then that migration to EU hit a peak with many fearing #Aleppo was next

10-Not once during past 4 years,had #Damascus thought of "letting #Aleppo go" in spite of numerous such recommendations from various corners

12-While many extrapolated fall of regime from fall of idlib, #Damascus was already starting to shift military assets to #Aleppo theater

13-Against most odds and in spite tremendous logistical challenges, the #Aleppo city operation seems over. This still leaves the reef next

14-Wars are unpredictable. There are still many chapters in this particular war and more importantly many open fronts for #SyrianArmy STILL


Led by a force of approximately 26,000 soldiers consisting of the notorious 'Tiger Forces' & contingents of other elite units including the 'Desert Hawks' & elements of Hezbollah and foreign allies ( Russian Special forces, Iranian & iraqi units); the SAA has penetrated deep into rebel heartland across East Aleppo, capitalising on a breach in defences in Hanano. This has led to a domino effect in relation to the fall of districts and the eventual capture of 95% of Eastern Aleppo and the mass evacuation of civilians.

Following the rapid collapse of rebel defences across their East Aleppo pocket last week, the SAA has finally delivered their most significant blow yet by capturing the strategic district of Sheikh Saeed, denting any rebel hopes of holding out against the SAA onslaught.

Backed by vigorous SyAF (Syrian Air-Force) & RuAF ( Russian Air-Force) air strikes, alongside a wide array of state of the art weaponry including the T-90 Russian battle tank, the SAA was successfully able to pin down entrenched rebel units in Eastern Aleppo. Opposition units were/are in a dire need of heavy, anti-tank weaponry, which has played a big factor in their consecutive defeats within Aleppo. Their inability to consistently take out SAA tanks has resulted in countless occasions of their positions being overrun.

Internal struggle has also been a large factor in the collapse of lines. We were told many commanders either fled or sold out to the SAA leaving entire groups of rebels without leadership. The clash between extremist groups and somewhat moderate groups also led to inconsistencies along the front line promoting instability and vulnerability as they shift their focus from the SAA to each other.

Rebel sources close to us claim their foreign backers let them down. They proceeded to insult Ahrar al Sham & other rebel groups for 'betraying the revolution' and leaving for Jarabulus 'for money'. They consider Aleppo 'lost' and proceeded to apologise to its people for their defeat. They also mentioned their anguish over the SAA's taking of all their stockpiles of weapons and other resources, questioning why they weren't burnt before capture.

The end of the Aleppo campaign will free up to 25,000+ soldiers in the SAA. The question now asked is where they will target next. With the timely fall of Palmyra and its surroundings, and the apparent visit of Suheil Hassan to the T4 airbase, rumours continue to circulate that Palmyra is next.

The rapid SAA blitz has resulted in the surrender of approximately 2100 rebels since the offensive initiated and the evacuation of nearly 90,000 civilians. The streets of Western Aleppo are packed with thousand sof people celebrating the 'liberation'of Aleppo city. Fireworks light up the night sky and the constant sound of celebratory gunfire can be heard in the distance.

The remaining rebel held areas are expected to fall in the coming hours.

Losses from the start of operations to take Aleppo, although hard to record, look like this:

Rebel toll looks too low. Too much districts liberated under heavy assaults for that to be that low. I'd assume 3 times more casualties for them.
KiloGolf

VladimirSahin wrote:Rebel toll looks too low. Too much districts liberated under heavy assaults for that to be that low. I'd assume 3 times more casualties for them.

I'd say over 50% of the rebel dead bodies were hardly recovered. Probably below urban rubble.
KiloGolf

Here, watch in HD how these paid scumbags started this war:

bold words by Lavrov. Confirms what we all thought a day back.

KiloGolf wrote:bold words by Lavrov. Confirms what we all thought a day back.

That was clearly the entire point and the sad fact is the attack wasn't meant to succeed just divert men away from Aleppo.
kvs

KiloGolf wrote:bold words by Lavrov. Confirms what we all thought a day back.

That was clearly the entire point and the sad fact is the attack wasn't meant to succeed just divert men away from Aleppo.

The SAA did not take the bait and did not pause the east Aleppo mop up operation. US last ditch effort: failed.
Now the propaganda about innocent babies killed by Russian bombs will fade into oblivion. But they are trying to
start a new hate narrative: missing 250,000 civilians in east Aleppo must have been killed. They were never
there since anyone who could escape from the salafi nightmare did.
miketheterrible

Our Leopard 2 Tank is still alive. You need to find something stronger than ATGM to destroy a Leopard 2A4. Our F-16 crashed because of Technical Failure. I am also sorry to say that, but we will continue to be in Syria.
Sponsored content