An interesting transition... from ugly duckling to swan...

For a while Ivan Gren was synonymous with everything that was wrong with the Russian Navy and the Russian naval MIC.

Mistakes were made and it could have been cancelled, but they persisted and worked through the problems and now have a product they see a use for...

Glad to hear the problem now is that they might not make enough of them...

These are support vessels and you generally can't have too many of those... I tend to agree with PD on this one... I think a few extra bigger ones might be more valuable than less and a few smaller ones as well.
owais.usmani

According to JSC United Shipbuilding Corporation (USC), the large landing ship (BDK) Pyotr Morgunov of project 11711, built at the Baltic Yantar Shipyard (part of USC), returned to the Baltic Sea on May 23, 2020 to the final stage factory sea trials. Their final stage should last until the beginning of June.

“During the test, part of the components of the ship’s hydraulic system failed. Now all the problems have been eliminated, and the paratrooper is at sea, ”said Andrei Parfyonov, project manager at 11711.

At the final stage of factory sea trials, the ship performs artillery fire. It is planned that in early June, "Peter Morgunov" will go to state tests, and upon completion they will be transferred to the customer.

BDK Peter Morgunov is the first serial ship of project 11711 developed by PJSC Nevsk Design Bureau. The contract for its construction was signed with the Ministry of Defense of the Russian Federation in September 2014, the laying of the ship took place in June 2015, launching- in May 2018. Factory ship trials began on December 13, 2019.

The lead BDK of project 11711 Ivan Gren was transferred to the Russian Navy in June 2018. Since April 2019, the Yantar Shipyard has been building two BDKs of the modernized project 11711 - Vladimir Andreev and Vasily Trushin .


On the part of bmpd, we recall that in late March there were reports that the second built by the BDK project 11711 "Peter Morgunov"from the sixth outing to sea, which began on March 17, due to technical problems, interrupted the factory sea trials and returned to the Baltic Yantar Shipyard to complete the finishing work. These rabotyots lasted almost two months. "Peter Morgunov" (serial number 0302) began the ZHI on December 13, 2019 after repeated transfers.

The shipbuilders’ sea trials are due to be completed by mid-July, according to Shipyard Spokesman Sergei Mikhailov

In any case it is decidedly different to both the Cayman and to the 11711M as revealed by Yantar, I would say it is bigger... 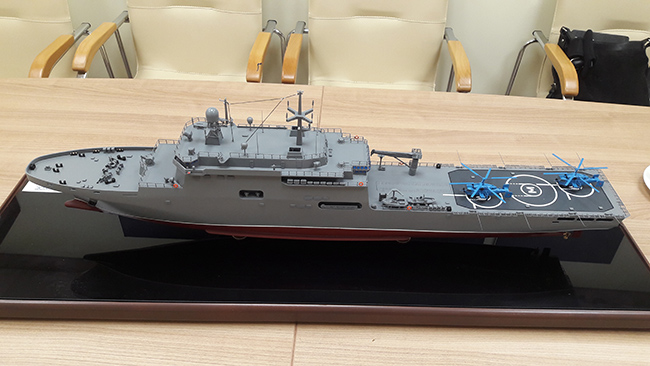 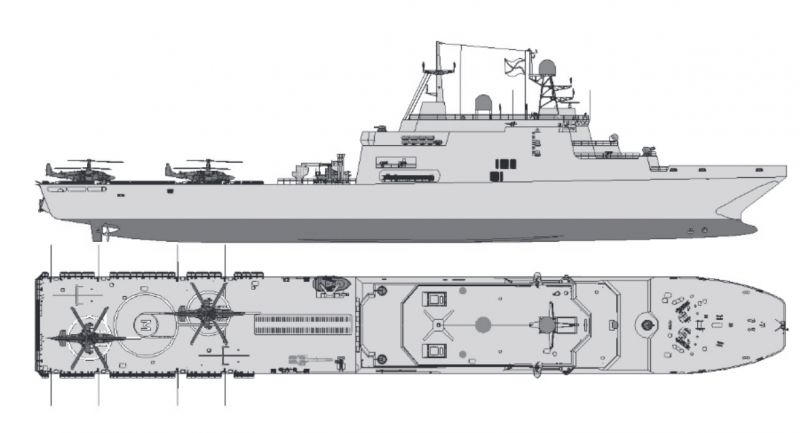 Quite significantly different from the original which had two separate body superstructure bits with a gap in the middle and a flat area at the back... this seems to have shifted the two structure bits together to make one big structure and a bigger area at the rear... which makes more sense for operating helicopters I would assume.
hoom

I'm thinking this might have been their proposal for cheaper/less risky 23900?

hoom wrote:I'm thinking this might have been their proposal for cheaper/less risky 23900?

Or maybe the answer is simple... somebody just messed up with the plaques....

hoom wrote:I'm thinking this might have been their proposal for cheaper/less risky 23900?

Or maybe the answer is simple... somebody just messed up with the plaques....

KALININGRAD, December 23. /TASS/. The Project 11711 large amphibious assault ship Pyotr Morgunov built at the Yantar Shipyard (part of the United Shipbuilding Corporation) has been accepted for service in the Russian Navy, a TASS correspondent reports from the scene.

The Russian Navy’s St. Andrew’s flag was officially raised aboard the warship.

"I express the confidence that the crew … will worthily represent the Russian Navy in the World Ocean," Navy Commander-in-Chief Nikolai Yevmenov said at the official ceremony.

The Pyotr Morgunov is the first serial-produced Project 11711 warship designed by the Nevskoye Design Bureau. The contract on the warship’s construction was concluded with Russia’s Defense Ministry in September 2014. The warship was laid down in June 2015 and put afloat in May 2018. The shipbuilders’ sea trials began in December 2019 and were completed in September this year.

In November, the latest warship wrapped up the program of state trials in the Baltic Sea. The large amphibious assault ship Pyotr Morgunov will operate in Russia’s Northern Fleet and the crew of the Fleet’s sailors is already staying on its board.

The warship has been named after the first holder of the 1st Class Nakhimov Order, chief of the Black Sea Fleet’s coastal defense during the Soviet Union’s 1941-1945 Great Patriotic War against Nazi Germany Lieutenant-General Pyotr Morgunov.

The Pyotr Morgunov is the Project 11711 second warship. The Project’s lead ship Ivan Gren was floated out in Kaliningrad in May 2012. It was accepted for service in the Russian Navy on June 20, 2018.

The Pyotr Morgunov is the largest in its class and displaces 5,000 tonnes. It will be able to take on its board 13 main battle tanks, or 36 armored personnel carriers or infantry fighting vehicles. An option is envisaged for taking a marine infantry battalion on its board.

The amphibious assault ship can also transport a reinforced marine infantry company with organic military hardware and land it with the use of pontoons. 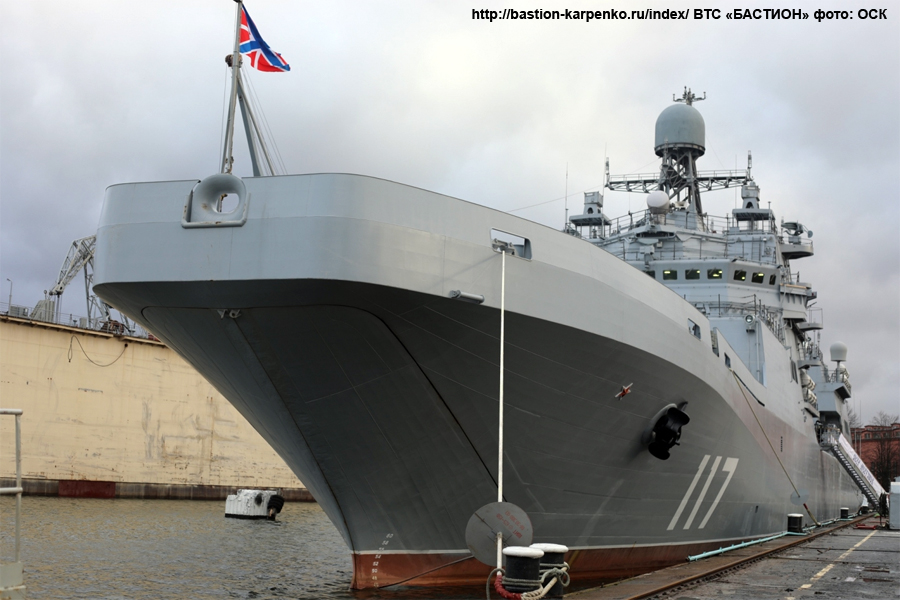 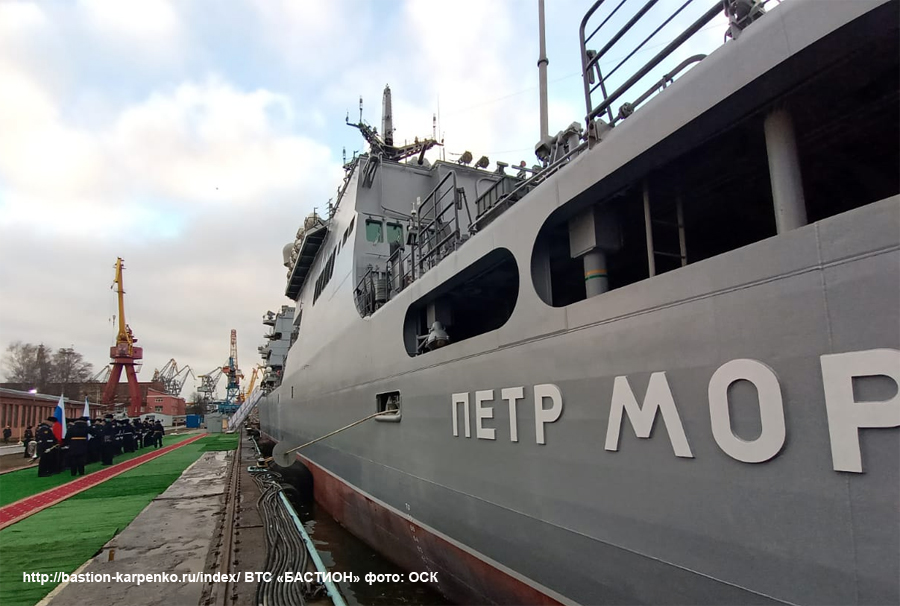 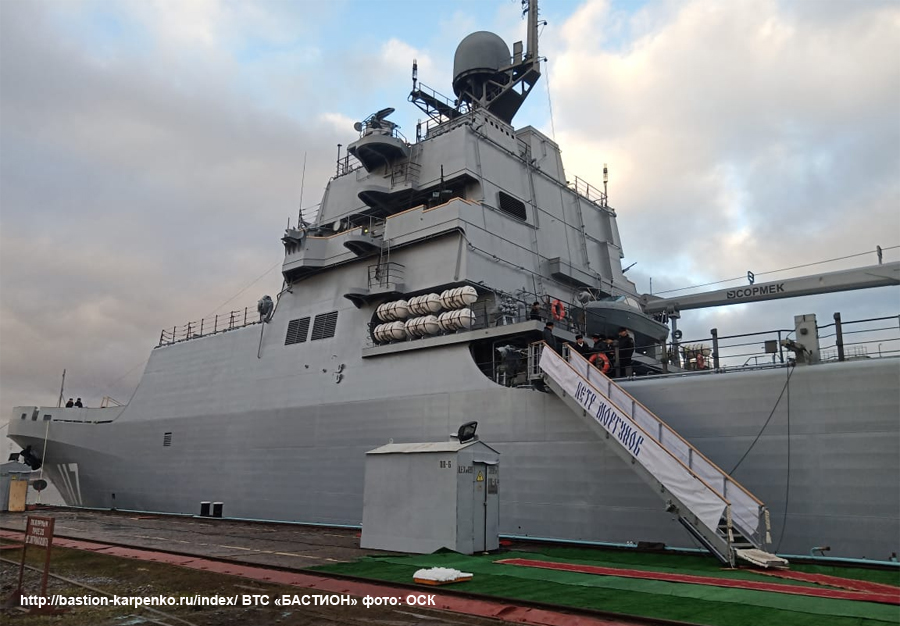 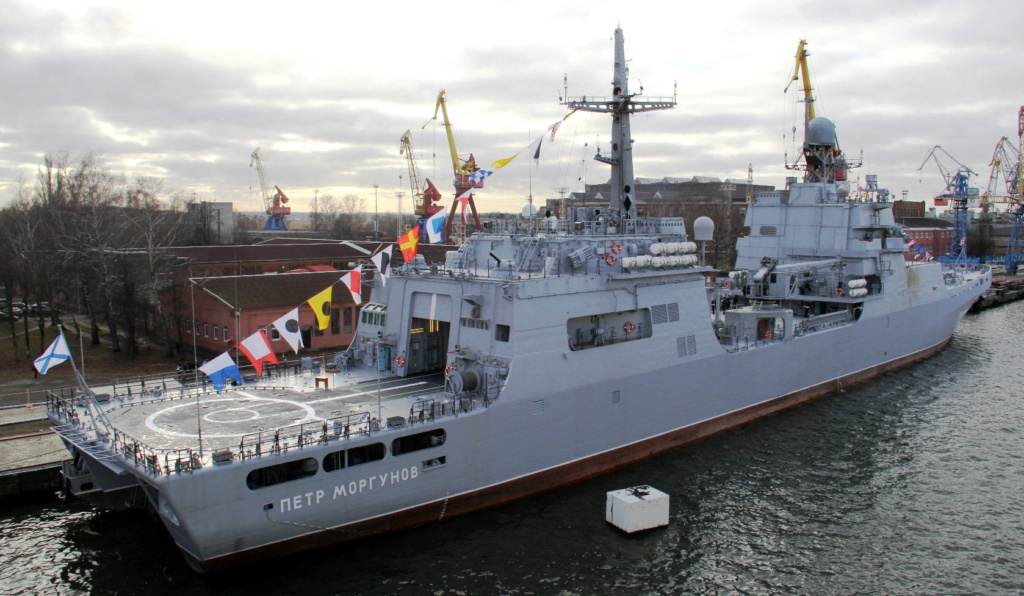