French article but with images in english of chinese project of a space based Laser + a radar that scan the surface of the water and detect water movments, that can detect subs up to 500m under water.
Tsavo Lion

Thailand the missing link in China’s Maritime Silk Road
The Kra Canal will be farther South, by the Malaysian border. The terrain is easier there & the locals have no objections.

An amphibious aircraft that can carry fifty passengers can also airlift an infantry platoon to a disputed island. An amphibious aircraft can deliver troops and supplies by landing in the water, rather than relying on airfields that will be prime targets for air and missile attack. https://nationalinterest.org/blog/buzz/coming-soon-south-china-sea-china%E2%80%99s-ag600%E2%80%94-world%E2%80%99s-largest-amphibious-aircraft-35387

Cambodia at the center of a new Cold War
Analysts say that the Koh Kong New Port, a planned deep-water port, will be large enough to potentially host Chinese frigates and destroyers, as well as other vessels of the People’s Liberation Army (PLA) Navy. ..“The Pilot Zone’s planned hospitals and recreational areas could theoretically host People’s Liberation Army Navy crews on patrol in the Gulf of Thailand and on the eastern side of the Malacca Strait,” the report stated. ..A China-controlled naval base in Cambodia would tilt the region’s strategic dynamic by giving Beijing a southerly position in now lacks in any conflict scenario.
“China seeks to build blue-water navy capabilities to project power farther from its shores for military contingencies overseas and to protect sea lines of communication in strategic waterways, particularly in the South China Sea and Indian Ocean,” says Derek Grossman, a senior defense analyst at the RAND Corporation, a US-based think tank.
“As we’ve seen with the establishment of the first Chinese naval base in Djibouti, Beijing is clearly thinking about this challenge, and thus it wouldn’t be surprising to see other naval bases pop up in the future,” he added.
So far, there is only speculation as to why China would want to develop a naval base in Cambodia.
One possibility, Grossman said, is that it would put pressure on Vietnam’s strategically positioned Cam Ranh Bay naval facility. Vietnam is now the region’s leading opponent of China’s territorial expansion in the South China Sea, where islands and features are also contested by the Philippines and Malaysia, among others.
US-Vietnam relations are on the upswing, in part because of Hanoi’s opposition to Beijing’s ambitions in nearby waters. There are also claims that a naval base in Cambodia would be instrumental in protecting China’s maritime trade routes. China faces a so-called “Malacca dilemma” in which its shipping routes through the Malacca Straits, between Malaysia and Indonesia, could potentially be choked by the US Navy in a conflict.
Most of China’s exports and imports, including as much as 80% of its fuel imports, pass through the strait and any blockage of trade would strangle its economy. A canal through Thailand’s narrow Isthmus of Kra has been repeatedly raised since the 16th century, but analysts think that BRI investment could make it a reality.
Indeed, China’s ambassador to Thailand raised the prospect of such a canal being funded under the scheme in October, to which Thai Prime Minister Prayut Chan-ocha ordered a national planning agency to research the project.
A Thai canal would limit China’s reliance on passage through the Malacca Straits and, given that Koh Kong’s coastline sits almost opposite the projected site of the Thai canal, a Chinese military presence in Cambodia would make financial and geopolitical sense.

China may boost carrier fleet to seven by mid-2020s: expert
..Chinese shipbuilders had already started the construction of three amphibious assault ships – 40,000-ton warships approximately the size of the French carrier Charles de Gaulle and bearing a resemblance to the US Navy’s America and Wasp-class amphibious assault ships. These ships would be big enough to deploy fixed-wing, short take-off vertical-landing combat aircraft.

Purpose-built F-35B and other fighters featuring short take-off vertical-landing capabilities are deployable on these amphibious assault ships, allowing them to effectively function as mini-carriers.
..the PLA’s Type 075 assault ships, all of which are expected to be in service by 2025 with each carrying up to 30 planes, will function as quasi-carriers, thus bringing the size of the Chinese Navy’s carrier fleet up to seven by the mid-2020s.
As for the development of the Chinese version of the F-35B, China can draw on Russia’s experience in designing short take-off vertical-landing aircraft.
Notice the 3 quad-rotors on deck!
Tsavo Lion

China ‘to overtake US in 15 years’

Love it when they post shit like that.... because the US reaction is that they are not spending enough on their military... they clearly need to spend more... I mean it is obvious to everyone else, but they need constant reminders from media that they are getting left behind and need more money to fix the problem... it is like they are digging their own grave and they have gotten to the point where they can't throw it high enough that the dirt they are digging gets out of the hole, so now they just throw it straight up and try to dig as far as they can before the dirt they threw up lands on their heads... and buries them.

But American politicians have made it clear that Russia and China and the EU are the enemy, so don't interrupt an enemy when it is making a mistake...

The real reason we don't want you to spend more money on weapons is that you might have a breakthrough and develop something game changing that will give you undisputed world dominance for ever.

China’s 2nd CV may be undergoing 4th sea trial including J-15 jet fighter test Recent online photos showed three blast deflectors and three aircraft on the flight deck. ..
Hong Kong-based military expert Song Zhongping said aircraft drills means all other technical issues have been solved.
“The previous three sea trials mainly solved problems like communications and power, which builds a foundation for the exercises involving warplanes,” he said.
“If the warplanes can smoothly take off and land, then it means the indigenous aircraft carrier will soon enter service.”
https://www.scmp.com/news/asia/article/2179704/chinas-type-001a-carrier-sets-out-fourth-sea-trial-analysts-say-call

Based on Liaoning, a 55,000-tonne Soviet Kuznetsov-class vessel, the Type 001A has made some significant modifications including upgrading the radar system, integrating the command bridge and, in particular, redesigning the aircraft hangar to make it capable to carry 32 J-15 fighter jets instead of 26. The ship is still conventionally powered with a ski-jump take-off.
According to the PLA Navy’s naming rules, the new vessel be named after a Chinese province when commissioned. In the case of Liaoning, the former Varyag was renamed after the province where it was retrofitted.
In 2019, the Chinese navy is also expected to receive its first 055 destroyers, which have been on sea trials since August.
This 12,000-tonne guided-missile warship, which exceeds the usual size of “destroyer”, will serve as the primary escort to the aircraft carrier in its strike group.
Type 055 is said to be the world’s second most powerful destroyer, after the US Navy’s DDG-1000, or Zumwalt class, and is the largest and strongest in Asia.
Three 055s were launched in 2018 and four more are being built, as the navy is quickly increasing its blue water capability.
Type 095 nuclear attack submarines (SSN) will be the underwater escorts for the PLA Navy carrier strike groups. A total of eight are expected to be built.
The PLA hinted that construction probably began on the first of the nuclear-powered Type 095s in 2017.
https://www.scmp.com/news/china/military/article/2179198/after-heavy-investment-chinas-next-generation-weapons-and

China plans to operate five aircraft carriers in the near future, including two nuclear-powered ones that would be launched around 2025 to meet the evolving strategic shifts , according to Chinese military experts. ..
Wang Yunfei, a naval expert and retired PLA Navy officer, said that China needs six aircraft carriers to ensure enough carriers are on active duty while the others are undergoing maintenance.
China will develop two nuclear-powered carriers, Wang told the daily.
Japan recently announced plans to convert 27,000-ton Izumo-class helicopter destroyers into aircraft carriers, sparking concerns in China.
Reacting to the reports, Song said that Japan's move means a fundamental change in the vessels rather than a simple boost to their combat capabilities.
https://economictimes.indiatimes.com/news/defence/china-plans-to-have-five-aircraft-carriers-in-future-chinese-experts/articleshow/66966130.cms

China must build about 10 naval bases for the six carriers. Xu said these bases can be built in friendly Pakistan, which is China's only major ally in Asia. China has no other military allies in Asia apart from Pakistan and North Korea. ..
The second of these six aircraft carriers, the CNS Shandong (CV-17), awaits commissioning into the PLAN. The fourth to sixth carriers remain in the planning stage.
http://en.businesstimes.cn/articles/105376/20181129/china-keen-building-11-aircraft-carriers-match-u-s-navy.htm

An incomplete sheet of PLA Navy surface ships launched in 2018. 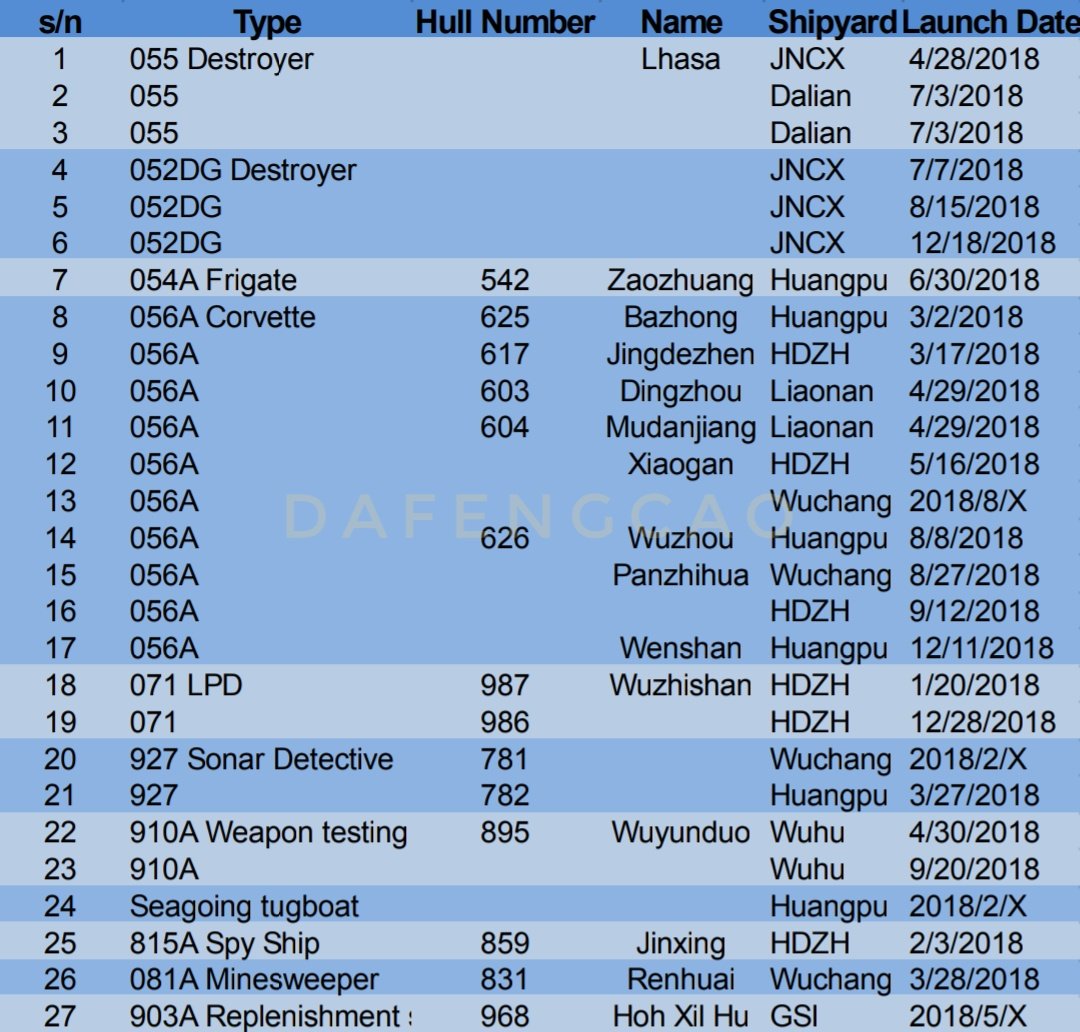 Im a little suprised that only one frigate was launched during 2018. They seem to be concentrating on larger destroyers and corvettes now.
Still, impressive.
Tsavo Lion

They probably have enough FFGs or have other priorities.
PLA wants FC-31 fighters on its aircraft carriers
Tsavo Lion

The CV-16/-17 may be forward deployed, instead of being sold, to Pakistan. From there, they can train in bombing real targets in Afghanistan &/ on the range in Sinkiang/Tibet with mid-air refueling.
They've practiced UNREPs for years, so refueling CVs in the Indian Ocean & the Arabian Sea can be done. CVNs still must be supplied with food & aviation fuel.
Tsavo Lion

PLA carrier back at sea after midlife refit
walle83

Tsavo Lion wrote:PLA carrier back at sea after midlife refit

Midlife? So its going to retire by 2026, probably not.
Tsavo Lion

They may do another 1 later to extend its life, so it doesn't mean anything.
Isos

Tsavo Lion wrote:PLA carrier back at sea after midlife refit

Midlife? So its going to retire by 2026, probably not.

I saw somewhere they could give it to pakistan. Not really reliable but who knows.

China planes to use mainly its own carriers.
George1 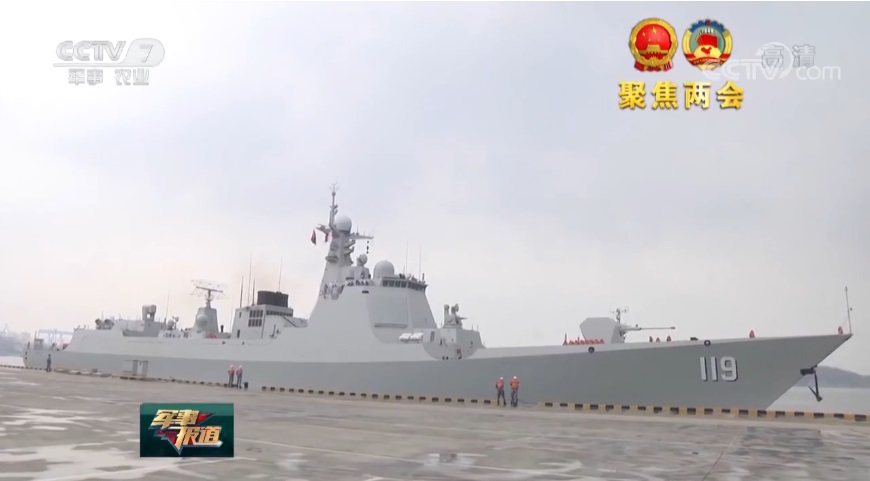 In addition to the Type 003 aircraft carrier under construction, 15 surface combat ships for the PLA Navy (project 052D destroyers and project 055 destroyers) are being built at the Jiangnan Shipyard in Shanghai. 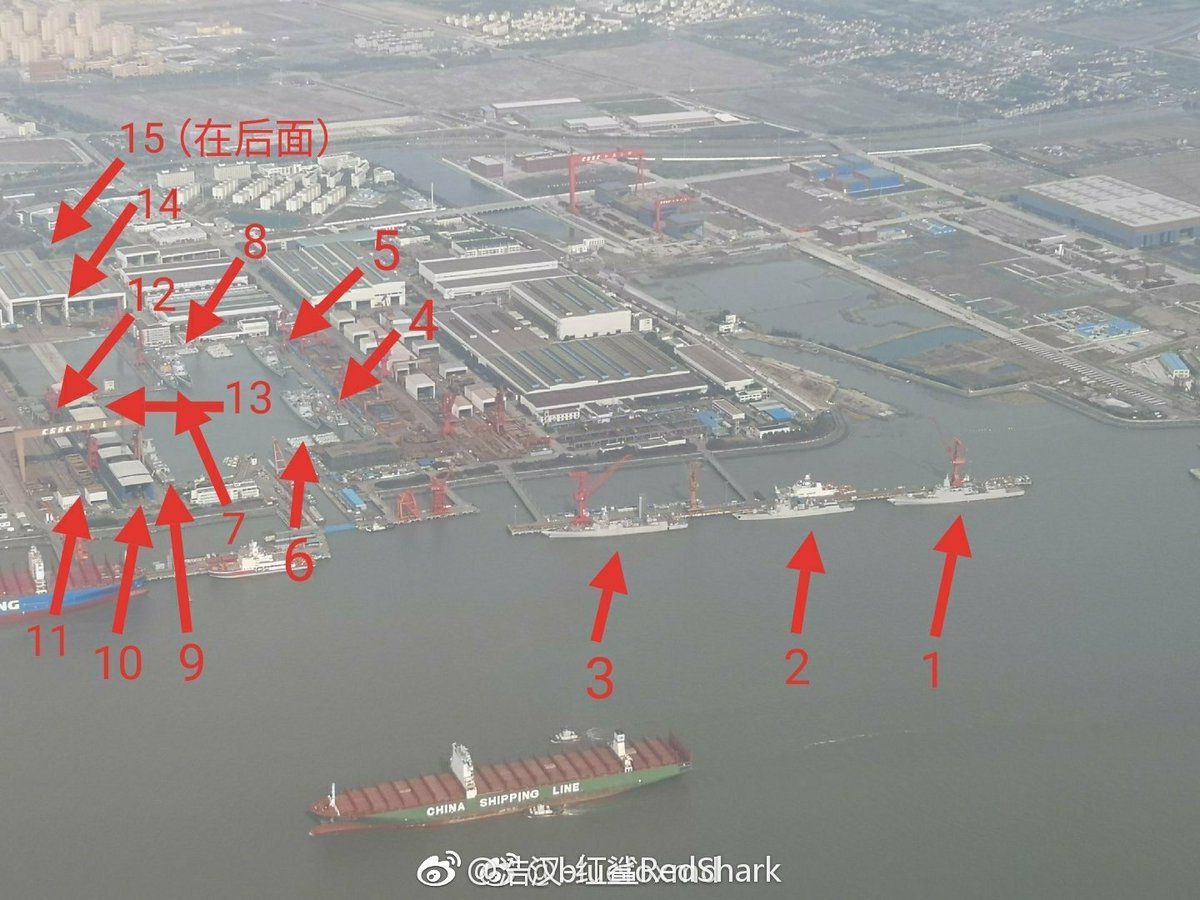 Midlife? So its going to retire by 2026, probably not.

Maybe it is so. The hull was not in a very good state when they took it. It was only ever intended so they could copy and test it to finally build their own.
Tsavo Lion

The hull had a thin rust layer but otherwise good. with proper care, it could last longer than expected, esp. since it'll be in the tropical & moderate climates instead of the Barents Sea.
George1

Newspaper "Independent Military Review" published an interesting article by Maxim Klimov "Torpedoes of the Great Neighbor. The main stages in the development of one type of marine underwater weapon of the Chinese fleet," which says that as a result of the large-scale state program, the Chinese Navy received a large set of modern torpedoes that are not inferior to the best foreign samples. 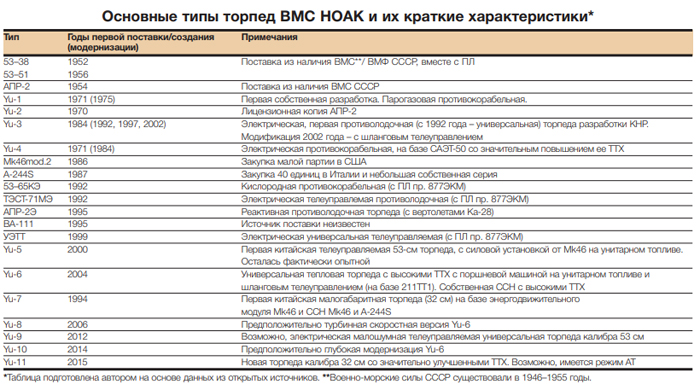