Some people are reporting fighting has reached Khattab town in North Hama. So the rebels have advanced about 10km in 2 days. I guess that's the problem with relocating fighters to Idlib. Their terrorist statelet gets stronger and they can do big offensives like South Aleppo or this Hama push.

THE MODERATE SYRIAN OPPOSITION ARE TERRORISTS FROM ALL OVER THE WORLD


All these things point to the terriosts uniting, so hopefully, Russia uses this to bomb the groups, that are related to the terrorists.


Please Stop already the BULLSHIT of the counter Battery radars. why you keep repeating
things? STOP.  Russia do have counter Battery radars in Syria , it was reported since very early
that Russia created the base.. it doesn't magically detect artillery positions . it have limitations.
So please STOP already repeating the same thing a million of times.. STOP..  Put an End
to flood every post with the same things again and again.. Just one time is enough.

And stop also complaining about Russia betraying Syria.. They have their interest too . and going to war with NATO over Syria , for a Country that 30% of its population is more or less Friendly to the principles of a Suni state in Syria and have some tolerance for Terrorist
and then have another 10% of Kurds that is in bed with Americans. Then you have a real problem of Russia trying to keep together in one piece a country that wants to be separated.

Assad committed a Huge mistake in allowing millions of sectarian Sunnis from IRAQ to flood the country after US invasion there. Syria is a nation that its population is NOT united. at least 30% of its population will prefer the nation be disbanded. So Russia is perhaps trying to achieve the impossible. you cannot win wars when Syrians are not united and even the Kurds now fighting Assad. So the best Russia can do is try to get some unity that wasn't there before ,so the nation does not disintegrate.

Russia military priority is defense of its Nation territory and only that. If Syria falls.. after all the help it received , then is because Syrians does not defended their land and Putin will not start a war with NATO , and risk its entire economy , over a muslin country ,that have so many of its citizens friendly to ISIS and Alqaeda.  In the worse case , it will be a major humiliation for Russia ,losing Syria , but Russia territorial integrity and economy will remain the same. It will not be the end of the world for RUssia. NATO taking Syria pose no threat  for Russia directly .  Where Russia will focus its attention is in Ukraine ,that already doing preparations for Invasion If Kiev if Ukraine continues its attack on Crimea or major assault on eastern ukraine.
calm 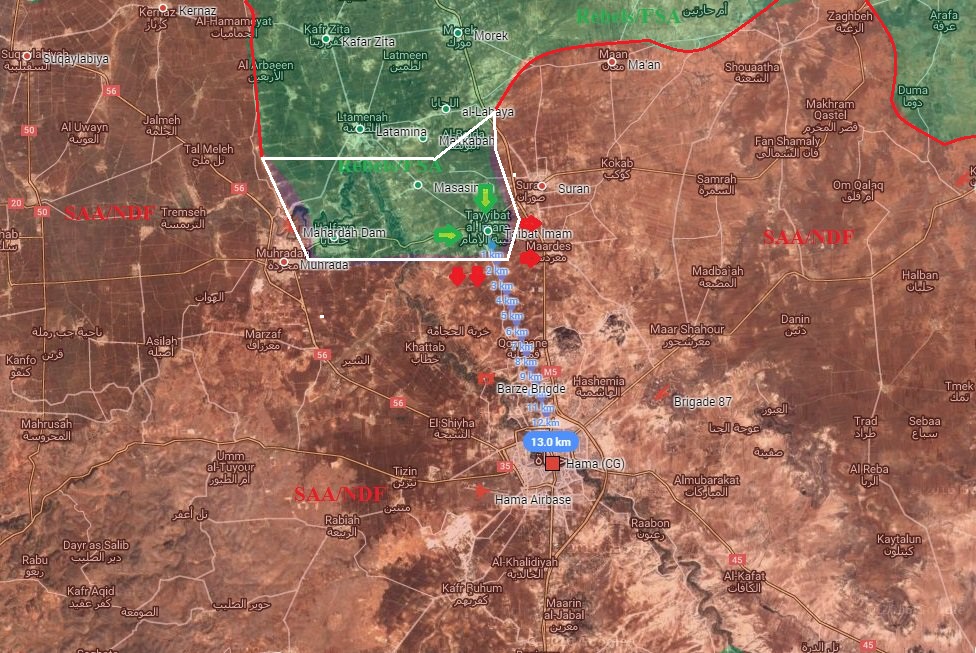 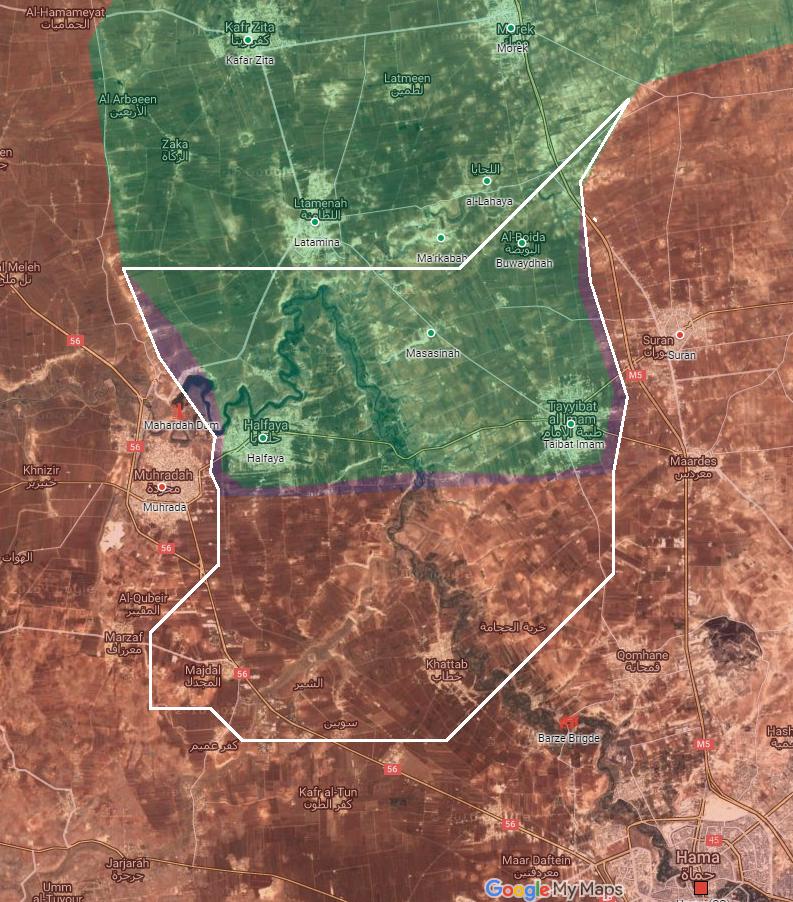 Often times, a war is more of a chess game than a brute fight. Americans are the most sly chess players in the world, having learned Sun Tzu's Art of War. Russians really got tricked bad this time, as bad as the USSR trick.
Vann7

Some positive developments in Northern hama..


Hama, Syria (3:00 A.M.) – Two hours after withdrawing from Khattab in northern Hama, the Syrian Armed Forces recovered all of their lost points and established full control over this key town that is located just 5 km north of the provincial capital.

The Russian Air Force was mostly absent during the Syrian Arab Army’s losses in the northern Hama countryside on Tuesday; however, their presence tonight helped propel the government forces to recapture some of their lost points.

Clashes are currently ongoing at the northern outskirts of Khattab, as the Syrian Armed Forces attempt to recover more territory they lost on Tuesday.

Reports of Tiger forces moving to hama to reverse all gains , and Russia airforce starting to
help. Russia should start training Syria airforce to really become independent of Russia .
I can say without a doubt the Major failure of Russia was in not training on time the Syrian
army and Syrian airforce to deal with terrorism. Tiger forces are basically the only combat proven force in all Syria ,that have been effective always in all fronts. it shouldn't be that way.
Russia should train at least 20,000 more Syrian Army forces to be as effective as Tiger forces.
So that they don't need to use Tiger forces for every major battle in Syria. and could use others.
The big missile army is IRAN.. zero news about them .


fighting force in Syria and

another deal being done with terrorists, but this in Homs Al Waer. %00 terrorists wanting to leave to go to Idilib. This time i would say no, the terrorists are only wanting this because their manpower levels are obviously getting low in southern Aleppo and another 500 will allow them to send them straight into Hama front. Only deal i would make is their complete surrender an no transfer only. If they do transfer them i would say no to arms, they cant take any weapons what so ever at least that way you might put some stress on their weapons supplies. Its a bit of a tricky situation because letting them go will free up some soldiers but just what are we freeing up? NDF or actual SAA because this does make a difference because NDF dont get sent anywhere else in Syria they stay to local area when the SAA can be sent anywhere. What does everyone else think? should they do the deal or not?

Often times, a war is more of a chess game than a brute fight. Americans are the most sly chess players in the world, having learned Sun Tzu's Art of War. Russians really got tricked bad this time, as bad as the USSR trick.

They are also really good at tennis... perhaps instead of just talking about stuff you might want to listen and think a bit more rather than talking so much rubbish.

The US have tricked no one, their name in the region is mud and they can get cooperation from factions because they provide money and weapons... remember all that money and weapons that assisted Al quada and Bin Laden in the 1980s against the Soviets... 20 years later those same US allies and buddies are attacking the World trade centre.

In the scheme of things it was a tiny pin prick in terms of US power, but it was one of the few times the US was reaping what it was sowing in the world around it.

And also as Van has mentioned the US had artillery detecting radar in Vietnam... it was not critical... on its own it is not actually that much use.

what you need is a mobile but also very accurate response system in place able to react in real time to detected shells in flight so when they are fired it is a minute or two before you can hit the source of enemy fire... but you need to be precise or the enemy will simply roll a mortar or towed gun up to an orphanage and fire a few shells and then move before you can fire back... you know guerilla tactics... the sort enemies use...
Walther von Oldenburg

Saying that m '80s US supported "Al Qaeda" is silly. In 1980s Bin Laden wasn't even in the top 10 of the most important anti-Soviet commanders - the big ones were Jalaluddin Haqqani, Ahmad Shah Massoud, Gulbuddin Hekmatyar, Abdullah Azzam etc. amog a multitude of others. Many of them never became a part of the Taliban and many later became officials in the new government, as did some former communist officials.
calm

New map, SAA regain khattab and checkpoint to the north, but lost Suran. 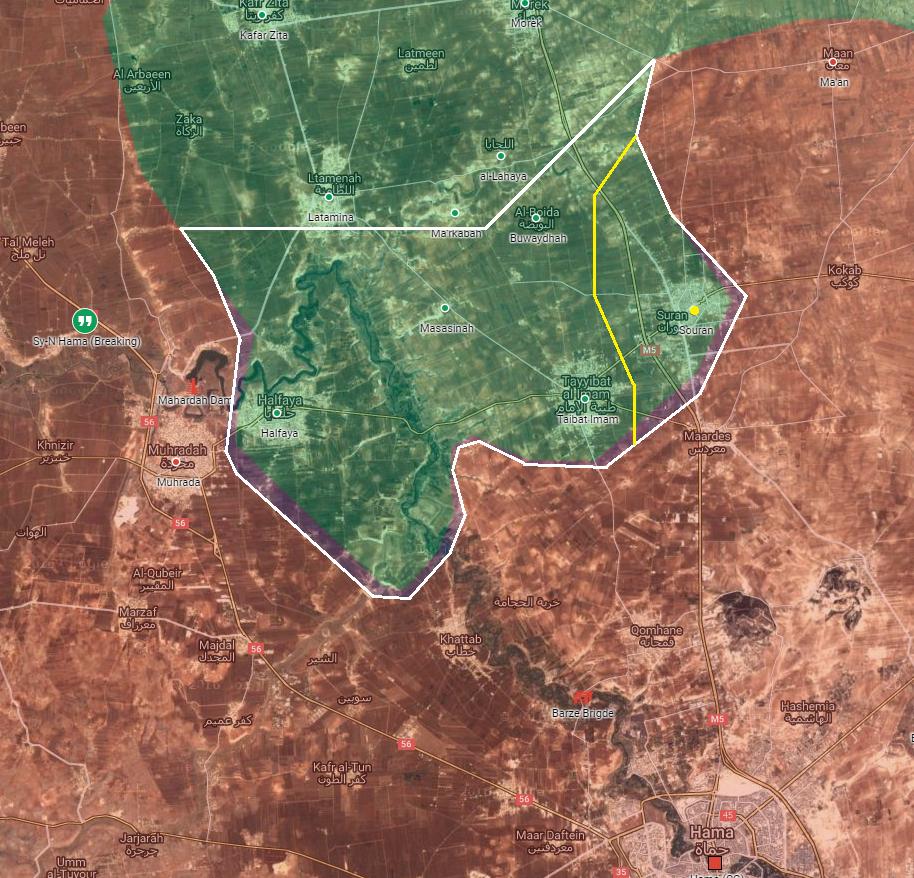 So as said before by End of August, the Aleppo situation will go back to siege status.

So you guys want to cheer about this or are you going all Dabiq-looney?
JohninMK

Looks like its time for anyone who really needs to get out of Aleppo to get out if they haven't already done so. Thinking high ranking ISIS or foreign 'advisors' here.
calm 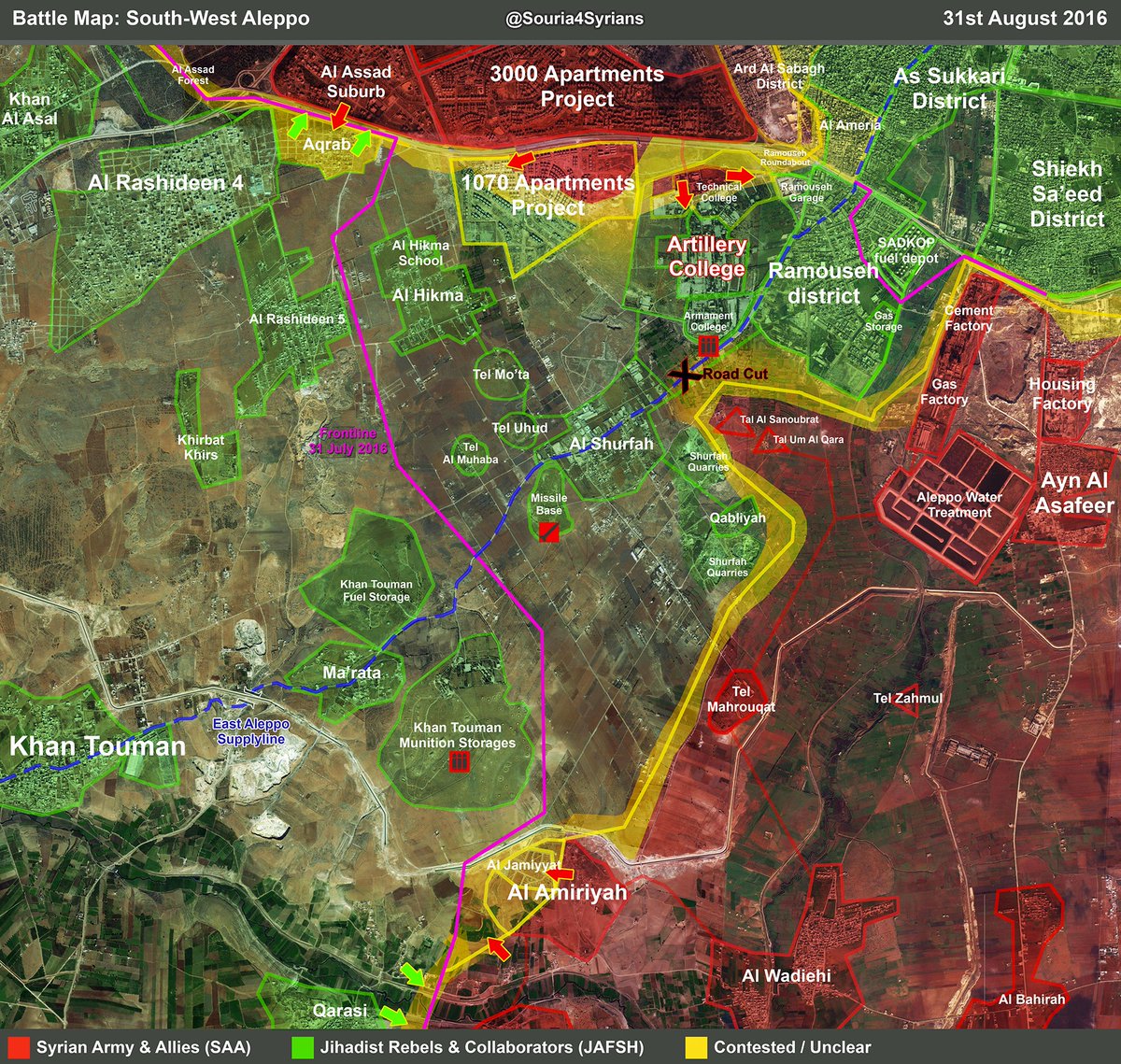 Terrorists repelled SAA attack at the Ramouseh Military Complex from the south.
Not for long.

KoTeMoRe wrote:So as said before by End of August, the Aleppo situation will go back to siege status.

So you guys want to cheer about this or are you going all Dabiq-looney?

I can almost hear the teeth grinding of those RU advisors from here. The SAA sure is a ball buster force, problem is they bust the wrong balls.
Resistance

KoTeMoRe wrote:So as said before by End of August, the Aleppo situation will go back to siege status.

So you guys want to cheer about this or are you going all Dabiq-looney?

I can almost hear the teeth grinding of those RU advisors from here. The SAA sure is a ball buster force, problem is they bust the wrong balls.

Yeah what is a ball burster is also that they can't seem to coordinate their efforts beyond the company level (on both sides).

Many of them never became a part of the Taliban and many later became officials in the new government, as did some former communist officials.

Al quada and the Taleban have nothing to do with this.

Osama made his fortune from US contracts in "Afghanistan".
calm