ALAMO wrote:Did anyone find the details? Was it calibrated in the process?

MOSCOW, May 16. /TASS/. The diesel-electric submarine B-871 "Alrosa" of project 877V "Halibut" after modernization became the carrier of the "Caliber-PL" complex and will soon return to the 4th separate brigade of submarines of the Black Sea Fleet (BSF) of the Russian Federation. This was reported to TASS on Monday in the power structures of Sevastopol.

"The Alrosa submarine left the 13th shipyard and has already taken its regular place at the berth. In the near future, its crew will begin to work out course tasks L-1 and L-2, after which it will return to the combat strength of the fourth separate submarine brigade," - the interlocutor of the agency said, noting that as a result of repair and modernization, the oldest boat of the Black Sea Fleet gained new combat capabilities - it became the carrier of the Caliber-PL missile system.

The diesel-electric submarine B-871 "Alrosa" was built in the city of Gorky (now Nizhny Novgorod) at the Krasnoye Sormovo plant and became part of the Navy on December 1, 1990. The boat was built according to the unique project 877B, which provided for equipping the boat with a jet propulsion instead of a propeller, which ensured the most covert movement.

Since December 1990, she was part of the 153rd submarine brigade. In March 1992, there was an attempt to seize the boat with the adoption of part of the team of the oath of allegiance to Ukraine. After the division of the Black Sea Fleet in June 1993, for 20 years it was the only active submarine of the Russian Black Sea Fleet.

In the period from 2014 to 2017, the Black Sea Fleet was replenished with six new diesel submarines of project 636.3 - carriers of the Kalibr cruise missile system.

Care to lob a few kalibres at Ukropisstain and make up for lost time?

Vladivostok, two diesel-electric submarines of the project 636.3 ; B-274 "Petropavlovsk-Kamchatsky" and B-603 "Volkhov".. 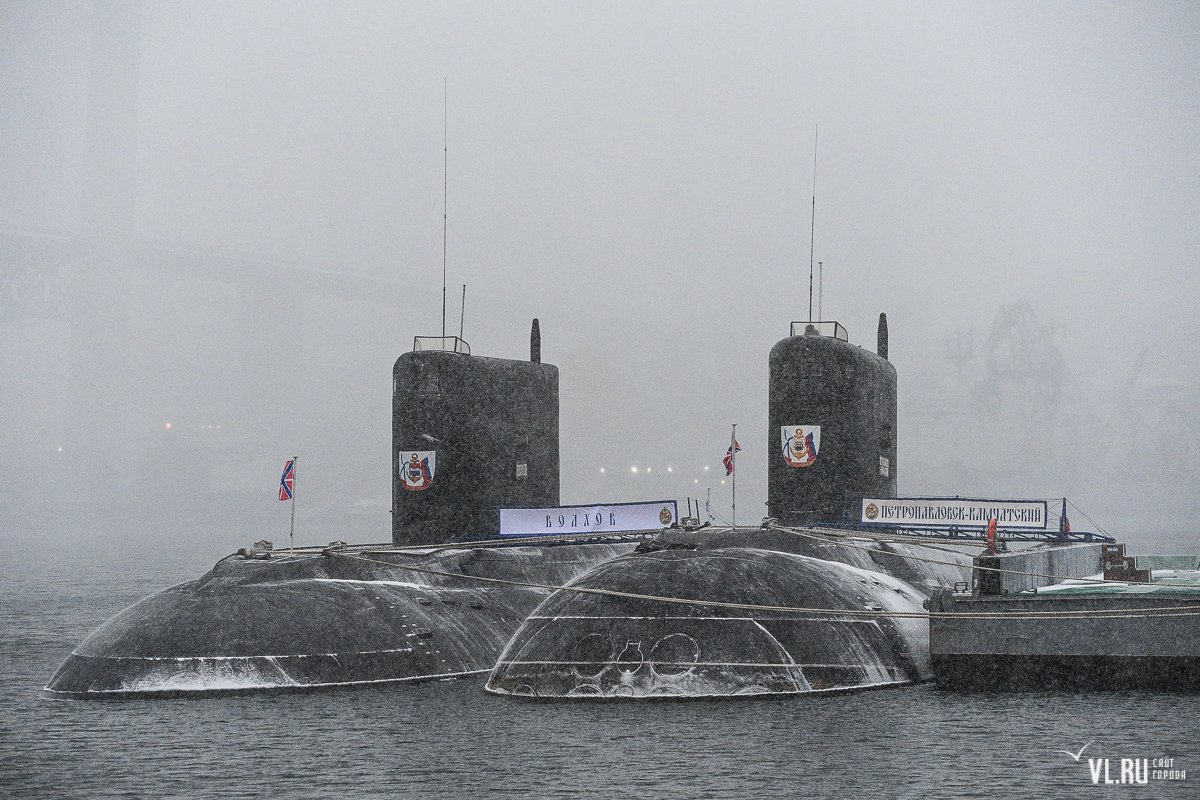 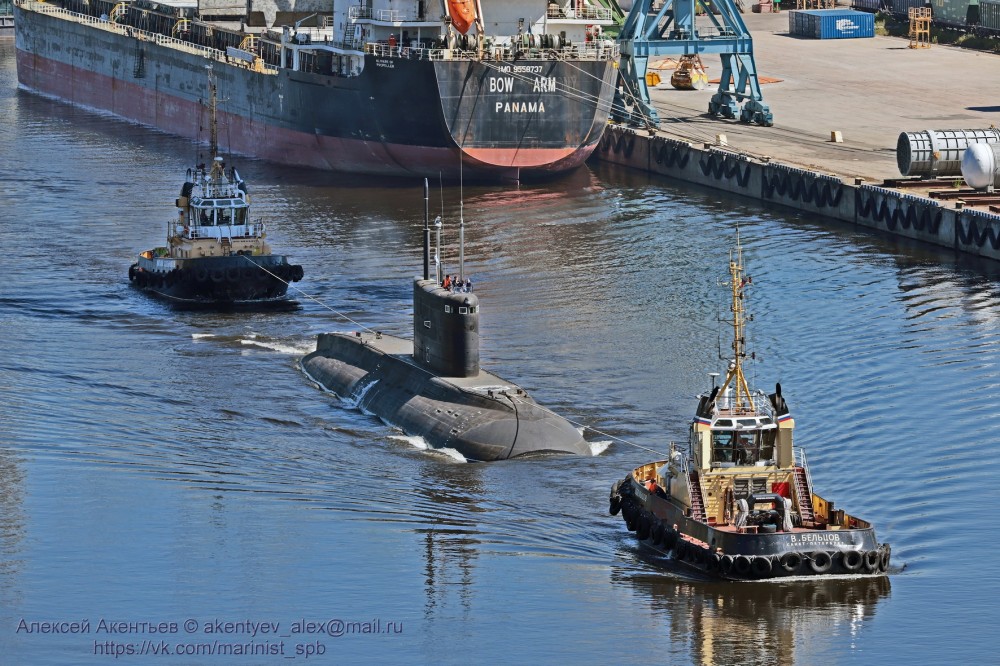 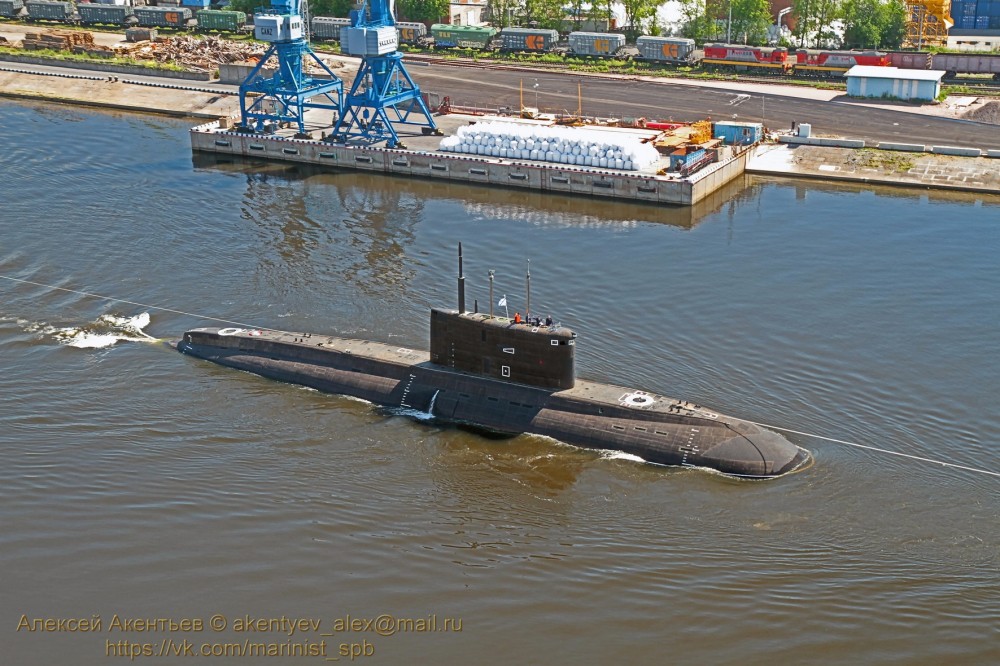 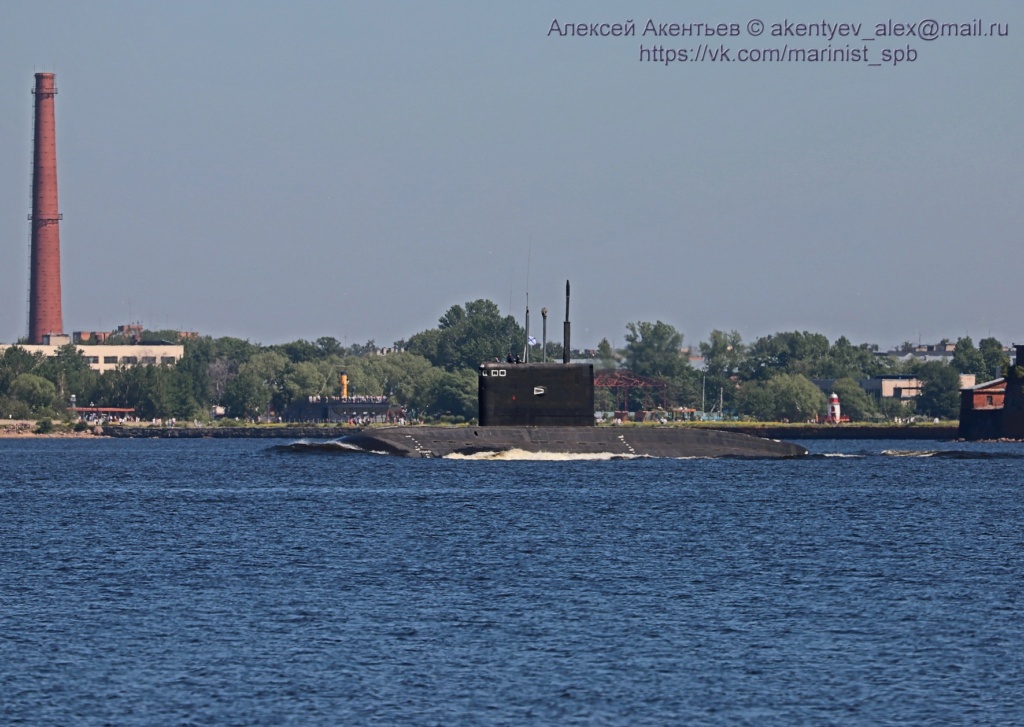 The signing of a contract for the construction of a new series of diesel-electric submarines is expected in the near future. According to a source in the Russian defense industry, the agreement will be signed within the framework of the Army-2022 international forum.

According to available information, it is planned to sign a contract for a series of diesel-electric submarines of project 636.3 "Varshavyanka", the details of the planned contract have not yet been disclosed, it is known that the submarines will traditionally be built by the Admiralteyskaya Verf shipyard.

A contract is expected to be signed for the construction of several Project 636.3 submarines. There will be more than two

For which fleet a series will be built, it is not yet clear. Earlier, another source reported that six Varshavyankas would be built for the Northern Fleet, the decision to build has already been made, but the contract has not yet been signed. Prior to this, there was information that a series of submarines of project 677 "Lada" would be built for the Northern Fleet, since the lead submarine "St. Petersburg" was already serving in the fleet. In addition, the first two production Ladas, Kronstadt and Velikie Luki, are to be included in the Navy this year, and two more, Vologda and Yaroslavl, are laid down on June 12.

Last year it was reported that a series of submarines for the Baltic Fleet would be laid down at the Admiralty Shipyards, and there was even information that the first submarine had already been named Petrozavodsk. Currently, the Admiralty Shipyards is completing the construction of a series of Varshavyankas of six units for the Pacific Fleet, today the fifth and sixth serial submarines Mozhaisk and Yakutsk are being completed.

Nice. All old Kilos must be replaced

After that add a few to the inventory.

It's a deception they still haven't started a new class. I guess the upgraded kilo are perfect for their needs.
Podlodka77

MOSCOW, September 1 - RIA Novosti. The ships and aircraft of the Russian Baltic Fleet went to sea, where the factory workers will test two diesel-electric submarines "Ufa" and "Kronstadt", the Balftlot press service reported on Thursday.
These two submarines belong to different projects: "Ufa" refers to the project 636 "Varshavyanka", "Kronstadt" - to the project 677 "Lada".
"Naval aviation, warships, rescue forces and support vessels of the Baltic Fleet are ensuring the next stage of factory sea trials of the latest diesel-electric submarines Ufa and Kronstadt in the fleet's sea ranges," the message says.

In the Baltic Fleet's maritime training grounds, submarine crews, together with industry representatives, check the operability of systems and mechanisms of ships at sea, test torpedo-rocket weapons, check the maneuverability of elements in a submerged position and steering gear at maximum speed.
"After completing the assigned tasks at sea, all ships and vessels will return to their permanent base - the city of Baltiysk," the Baltflot said.

"Ufa" is the fourth submarine of the series for the Pacific Fleet, laid down in November 2019, launched on March 31, 2022. The first three submarines of the series have already been accepted into the Navy: the lead "Petropavlovsk-Kamchatsky" was transferred to the fleet in 2019, the first serial "Volkhov" - in 2020, and the second serial "Magadan" in October 2021. The first two submarines have already been sent to Kamchatka to the place of permanent deployment, the third submarine will remain in the Baltic for now. The fifth and sixth two submarines "Mozhaisk" and "Yakutsk" were laid down on the same day - August 23, 2021. Mozhaisk will be launched in 2023, Yakutsk - in 2024. The last submarine of the series is to be delivered to the fleet in 2024.

"Kronstadt" is the first serial submarine of project 677, was launched in 2018, the transfer of the Navy is scheduled for 2022.

Is it so hard to remove the image that has nothing to do with the article or topic?

[quote="PapaDragon"]
Is it so hard to remove the image that has nothing to do with the article or topic?

Exactly THAT PICTURE is on the link with the text I posted..

PapaDragon wrote:
Is it so hard to remove the image that has nothing to do with the article or topic?

Exactly THAT PICTURE is on the link with the text I posted..

There isn't a single useful thing in that photo
Hole

Because of that pic we made 4 useless posts.

Diesel-electric submarine of the Pacific Fleet B-602 "Magadan" 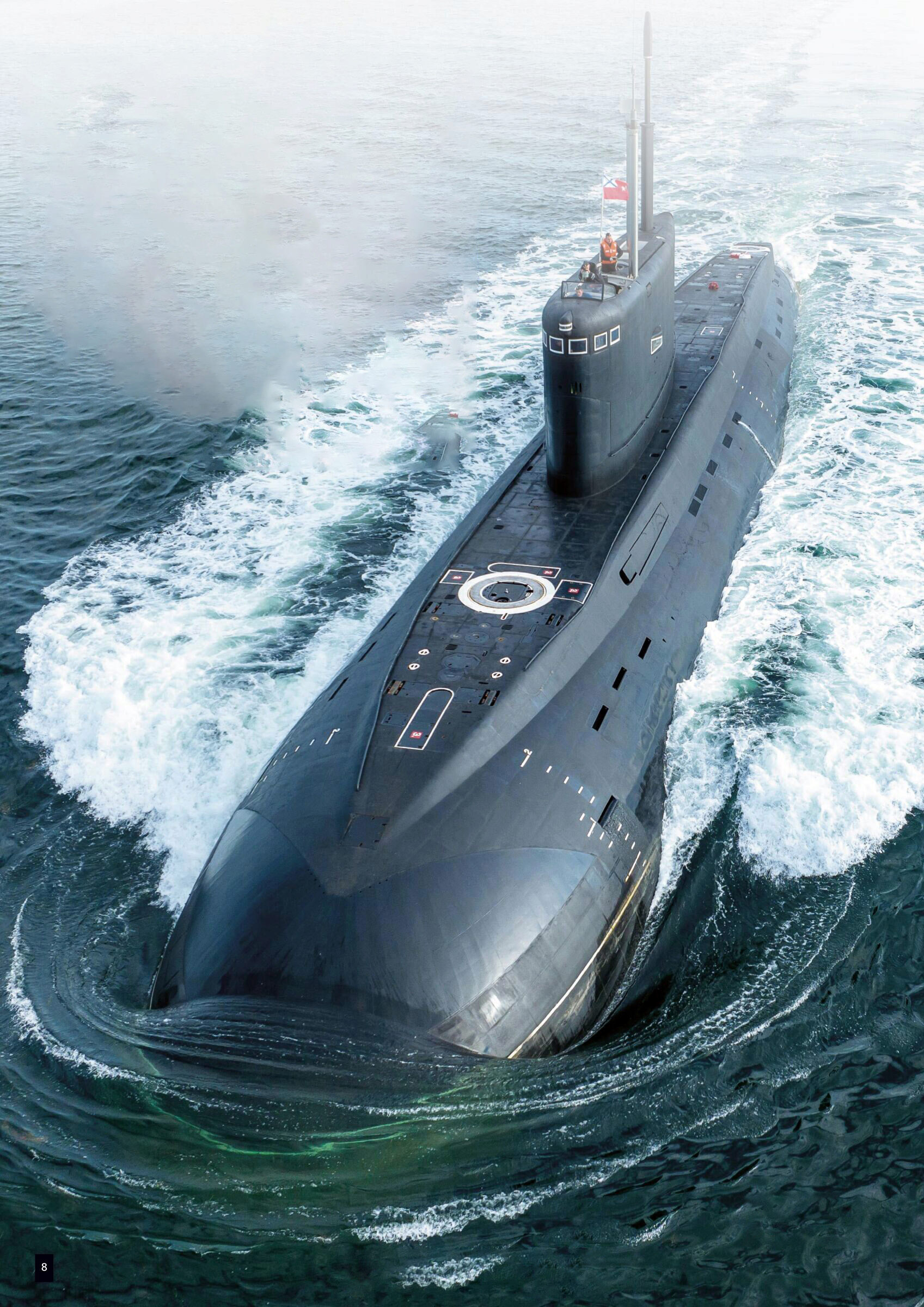 Latest picture of Russian diesel-electric submarines B-588 "Ufa". I think the submarine will soon be handed over to the Russian Navy. 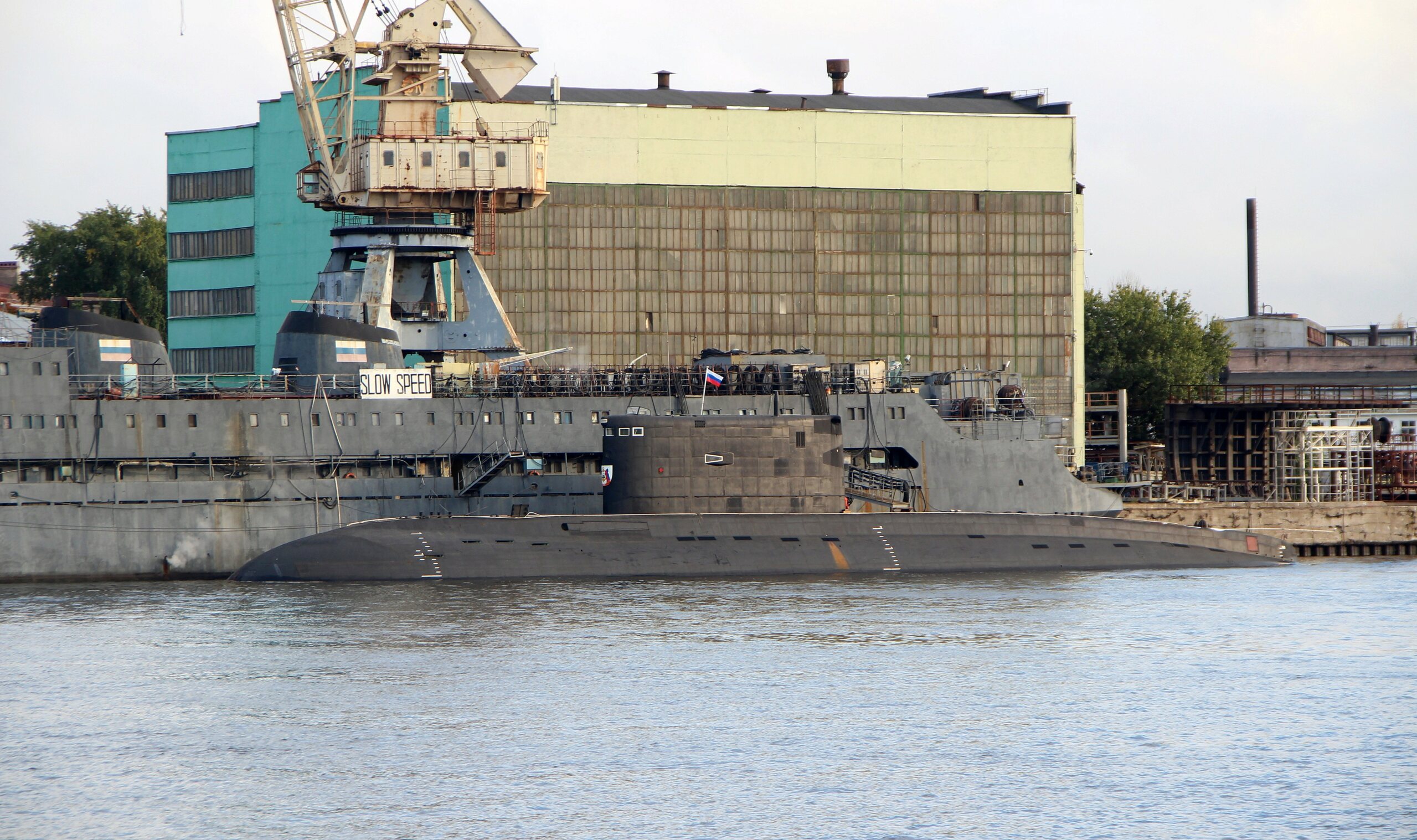 VLADIVOSTOK, 9 October. /TASS/. The submarine "Magadan" completed the inter-fleet transition from the Baltic Fleet and, having crossed the Northern Sea Route, for the first time arrived at its permanent base - in Vladivostok. This was reported on Sunday by the press service of the Pacific Fleet (Pacific Fleet).

LMFS wrote:The signing of a contract for the construction of a new series of submarines of the Varshavyanka project was announced

A contract is expected to be signed for the construction of several Project 636.3 submarines. There will be more than two

Last year it was reported that a series of submarines for the Baltic Fleet would be laid down at the Admiralty Shipyards, and there was even information that the first submarine had already been named Petrozavodsk.

- with United Shipbuilding Corporation JSC - for the construction of three diesel-electric submarines of project 06363;


Then, the total for Baltic Fleet will be 4 submarines 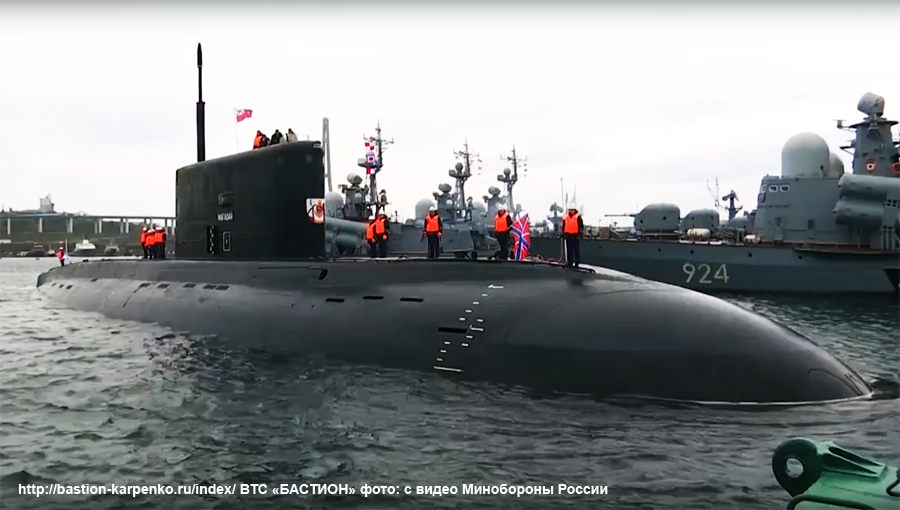 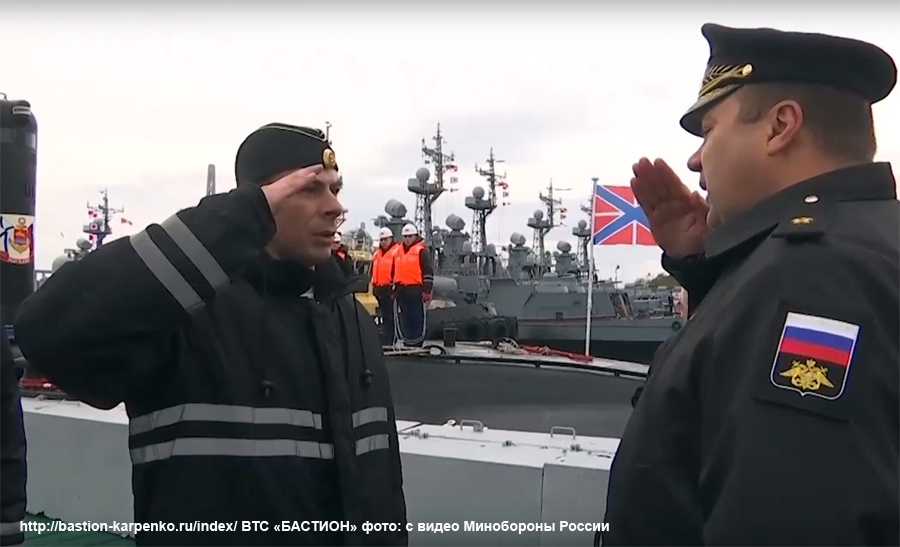 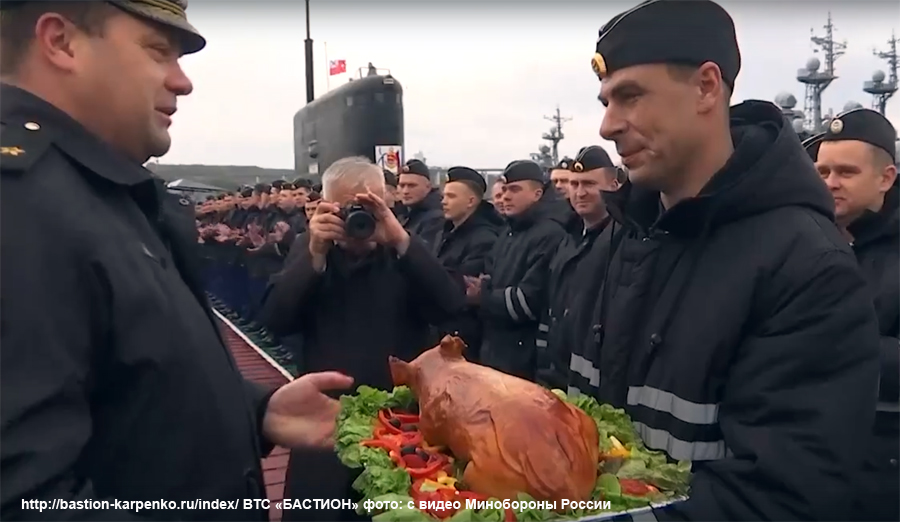 The transfer of the Alrosa submarine armed with Kalibr to the Baltic Sea has been canceled
June 17, 2022,

The transfer of the Alrosa B-871 Alrosa multi-purpose diesel-electric submarine (DEPL) of project 877V "Halibut", which became the carrier of the Caliber-PL missile system after modernization, to the Baltic has been canceled. The ship became part of the Black Sea Fleet submarines.

"After repair and modernization, the oldest Black Sea boat Alrosa became the carrier of the Caliber-PL complex, and also became part of the fourth separate submarine brigade. The transfer to the Baltic Fleet, planned earlier, is now irrelevant," a source in power structures

Earlier it was reported that Alrosa was planned to be transferred from the Black Sea to the Baltic. It was planned, after the completion of repairs at the 13th shipyard of the Black Sea Fleet, to transfer the submarine to the Baltic Fleet, where it was to become a training platform for training crews of project 636.3 submarines under construction.

It was reported that a series of six diesel-electric submarines of Project 636.3 Varshavyanka will be built at the Admiralty Shipyards for the Northern Fleet of Russia.


It seems the Alrosa transfer to Baltic Fleet was cancelled because the Special Military Operation. At least for the moment

Also is planned other 636.3 series for North Fleet

And also B-871 Alrosa could remain as training submarine

And all of them will be calibrated.
In perspective, a rather powerful Japanese navy operates 13 conventional subs at the moment.

Just 4 in the Baltic?

And all of them will be calibrated.
In perspective, a rather powerful Japanese navy operates 13 conventional subs at the moment.

Japan can easily bring all their subs togather very fast.

Russian subs from the north can hardly help those in the pacific, nuclear subs could more easily but the trip is long.
ALAMO

Hole wrote:Just 4 in the Baltic?

That is double the digit of operational U-boots you have.
The water level of the Baltics will rise if all four will hit the water

Sweden plans a whole two new subs if I remember.
You have 6 in theory, two in working condition, and the North Sea to operate.
We have 1/2, Kobbens are just a junk while sole Warshavianka is hardly operational.
Finns and Dunes have zero.

But today they can launch Kalibers.

Maybe a version of Tsirkon...