Can you quote it for us? Ft requires us to subscribe to view their articles
GunshipDemocracy

Can you quote it for us? Ft requires us to subscribe  to view their articles


thisa is w/o subscription

A photo of the past overhaul on the technical base of JSC "Aviation Complex named after S.V. Ilyushin "in the Zhukovsky transport plane Il-76T, formally owned by the Syrian state airline Syrian Arab Airlines. This aircraft was built in 1980 (the Syrian registration number YK-ATB, serial number 093421619, serial number 16-05) was repaired in Zhukovsky from the beginning of 2017 and was returned to operation in March 2018, being one of the three Il-76s located in operation from Syrian Arab Airlines and actively used for transportation between Syria and Russia. 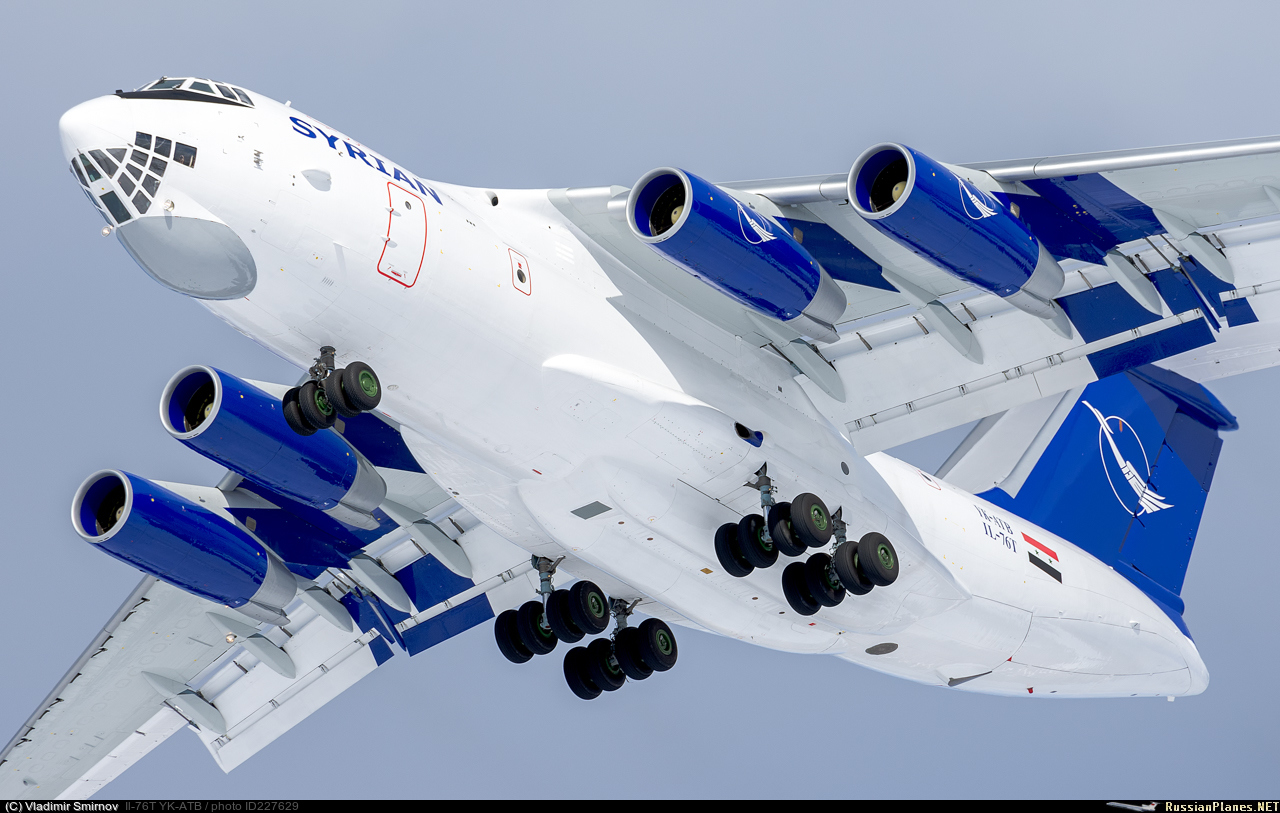 In 1980-1981, the Syrian Air Force received from the USSR four IL-76M military transport aircraft of new construction, which were then put under operation in the 1990-2000s under the flag of the Syrian Arab Airlines Syrian Arab Airlines and nominally renamed as civilian Il-76T. Currently, under the signboard of Syrian Arab Airlines, three of these IL-76T vehicles (registration of YK-ATA, YK-ATB and YK-ATD) fly actively, and YK-ATC has been stored in Damascus for a long time. Earlier in 2015-2016 on the technical base of JSC "Aviation Complex named after S.V. Ilyushin "in Zhukovsky was overhauled aircraft with the registration of YK-ATD (serial number 0013431915, serial number 23-09).

In the fall of 2015, the Russian side handed over to the Syrian Air Force nominally two IL-76MD military transport aircraft from the Russian VCS, but both retain Russian registration numbers (RA-76634 and 76639), and apparently continue to be operated with Russian crews .

Moscow, Damascus to ink accord on instructing Syrian cadets in Defense Ministry’s schools

The training of young Syrian students is due to be free of charge, with all costs paid for by Russia

MOSCOW, July 13. /TASS/. Russia and Syria are planning to sign an intergovernmental agreement on training minors from the Arab republic in the Russian Defense Ministry’s educational institutions. A decree to this effect issued by Russian Prime Minister Dmitry Medvedev has been posted on the official legal information website.

"To approve the draft agreement between the government of Russia and the government of Syria on training juvenile citizens from Syria in the Russian Defense Ministry’s general educational institutions implementing general and secondary education training programs <…> aimed at preparing underage students for military or other public service," the document reads.

The training of young Syrian students is due to be free of charge, with all costs paid for by Russia. However, students will be admitted to the Defense Ministry’s schools on a competitive basis. The selection of candidates will be the purview of the Syrians.

Medvedev also issued an order to draw up and sign a similar agreement with South Ossetia.

"We are looking at opening air service between Crimea and Syria," he told journalists.

He also said that the Crimean portы are ready to implement the plans for the establishment of a Crimean-Syrian steamship company. "We are beginning this work," he said. "Some ports need to be adjusted to receive vessels with deeper draught. When the actual agreement is signed, it will be clear what kind of vessels are in question and what they will transport."

According to Aksyonov, it is too early to say now which companies could take part in the modernization of Crimean ports. "So far, I am not ready to say who will implement modernization projects. I think Russian companies are quite capable of doing this," he noted.

A Crimean delegation is paying a visit to Syria on October 15-16 to discuss issues of trade and economic cooperation.

Turnover between Russia, Syria may reach $1 bln in coming years

In 2017, the turnover between Syria and Russia was about $380 million

DAMASCUS, October 15. /TASS/. Turnover between Russia and Syria may reach a billion dollars in the next two years, co-chairman of the Yalta International Economic Forum organizing committee and member of Crimea’s delegation to Syria Andrei Nazarov stated on Monday.

"Russian business would like to build relations with Syria," he said. "We hope that in the next few years the turnover between our countries will reach the pre-war level. Already in a year or two we plan to reach the turnover of at least one billion dollars in the areas discussed today."

The main areas of economic cooperation discussed by the Crimean delegation in Syria are deliveries of railway and electrical equipment, grains and flour, as well as Syrian phosphates.

It is expected that the economic cooperation between Russia and Syria will expand due to the creation of a joint Russian-Syrian economic company that would facilitate stable trade between Crimea and Syrian ports of Latakia and Tartus.

Syrian children to study at Russian cadet schools for free

The document was signed in Moscow on September 20

MOSCOW, October 30. /TASS/. Russia will grant children from Syria a possibility to study at cadet schools of the Defense Ministry for free, according to a bilateral agreement posted on the Russian government’s legal information web portal on Tuesday.

The document was signed in Moscow on September 20 and entered into force on October 20, 2018.

As the agreement stipulates, the Syrian children will study on the basis of contracts concluded by the authorized bodies of Russia and Syria and pursuant to the curricula developed for Russian cadets of these schools. The cadet schools will offer classroom instruction in the Russian language for Syrian children.

The Syrian children will study on a gratuitous basis. The education expenses will be borne by the Russian side. At the same time, enrolment to cadet schools will be on a competitive basis. Candidates for the studies will be selected by the Syrian side.

Russia will set up in Syria the largest hub on its wheat exports in the Middle East, Syrian Transport Minister Ali Hammoud told Sputnik in an interview.

George1 wrote:Russia will set up in Syria the largest hub on its wheat exports in the Middle East, Syrian Transport Minister Ali Hammoud told Sputnik in an interview.

hehe let me wait fo French govt representative who will calim Russians are not working for good of Syrians!
George1

DAMASCUS, April 20. /TASS/. Syria may soon lease out to Russia its seaport of Tartus for a term of 49 years for economic uses, Russian Deputy Prime Minister Yuri Borisov said on Saturday after his meeting with Syrian President Bashar Assad.

In 2017, Moscow and Damascus signed an agreement on the deployment of a Russian navy logistics support center in Tartus for the term of 49 years.

"A key issue that is to yield positive dynamics is the one on the use of the port of Tartus. My visit has cemented all these agreements. We have made a considerable progress on that matter and hope that a contract will be signed within a week and the port of Tartus will be used by Russian businesses for 49 years," Borisov said.

He said that the decision to lease out the Syrian port to Russia had been taken at a session of the intergovernmental commission. The move, in his words, is expected to boost trade between the two countries dramatically.

And this is the difference... the Russians want Syria to grow strong and independent because a good strong Syrian economy means a good strong trading partner, which is good for Syria and for Russia.

Russia can't survive if all its trading partners are enemies of the west and remain nut case dictatorships than suck energy from Russia but do not contribute anything to Russia or the world...