Some torpedoes, in particular, Fizik-1 or product 2534, were ready five years ago, but are still no being used by the Russian Navy, despite the appearance of Fifik-2 with a new engine.


according to a high-ranking official, experts of appropriate agencies "are developing design of a new 5-generation SSN and a new destroyer"; by the way "basic weapon of those projects will be advanced shipborne missile system Caliber operating both antiship cruise missiles 3M-54 and long-range cruise missiles 3M-14 capable to destroy enemy's land objects". Moreover, "development of Zircon-S ship-based hypersonic missile system is also scheduled", said Popovkin.

Perhaps only time will tell. But thats a bad joke in any case
Austin

So Ziron-S is officially communicated as under development. Ofcourse we should not forget Hypersonic brahmos too will be available.
TR1

I have yet to see Rogozin take care of anything yet.

He just tweets nonsense and drives around the country for photo-ops.
Russian Patriot

TR1 wrote:I have yet to see Rogozin take care of anything yet.

He just tweets nonsense and drives around the country for photo-ops.

Its called image of corruption


My earlier predictions that ya'll called pessimistic? I am downgrading them further. VMF will likely have 3 885s in service by 2020.
At best? 4.

Large-scale construction of the next-generation Project 885 Yasen-class multi-purpose nuclear attack submarine, armed with Onyx supersonic cruise missiles has begun in Russia. The ships will compete with the latest American Seawolf-class nuclear submarines in terms of their noise profile and will be world leaders in terms of fire power. Moscow plans to acquire at least 10 of these boats by 2020. The fourth submarine in this class was laid down in Severodvinsk on the eve of Navy Day, which was celebrated on the last Sunday in July.
The Project 885 nuclear submarine is the quintessence of everything the Russian military industrial complex has achieved in over half a century of building submarines. The vessel has a hull made from high-resilience low-magnetic steel, and so can dive to a depth of more than 600 metres (conventional boats cannot go deeper than 300 metres), which effectively puts it out of reach of all types of modern anti-submarine weapons. Its maximum speed is more than 30 knots (about 60 kilometres per hour). The nuclear submarine is equipped with an escape pod for the whole crew

The Russian designers say that the Yasen is not only quieter than the Project 971 Akula, but also quieter than the latest American Seawolf nuclear submarine. Moreover, unlike those vessels, the new missile submarine will be more functional thanks to the weapons at its disposal (several types of cruise missile and torpedo) and will be able to fulfil a wide range of roles at sea.

The Akula nuclear submarine is currently the most important of the Russian multi-purpose attack submarines designed for raiding operations against sea lanes. Virtually inaudible in the depths of the ocean, they are equally effective against transport vessels and warships, and can also hit the enemy’s coastal infrastructure with cruise missiles. Akula submarines were recently spotted within the 200-mile zone of the coasts of the United States and Canada, which caused a serious commotion among the countries’ respective militaries. Having discovered the presence of these ‘guests,’ neither of them was able to track their movement, which naturally caused serious concern. After all, the Akula carries on board 28 Kh-55 Granat cruise missiles, the equivalent of the American Tomahawk, which can fly 3000 km and deliver 200-kilotonne nuclear warheads to their targets.


The main attack system on the Yasen is the P-800 Onyx, the latest Russian supersonic cruise missile. This missile is the base version for two absolutely identical export versions in terms of their appearance: the Russian Yakhont and the Indian BrahMos, although with significantly reduced combat characteristics. These devices are capable of being fired from under water. They fly at a speed of 750 metres per second and carry a devastating high-explosive warhead weighing half a tonne. They have a range of more than 600 kilometres.

The Onyx is guided to its target by a navigational system that operates on target designation data, that is inputted provisionally to the missile before it is launched. At a predetermined point in the trajectory (25–80 kilometres), the missile’s homing device is briefly activated and determines the precise location of the target. The homing device is activated again after a sharp reduction in altitude of 5–15 metres, just seconds before it hits the enemy. This is to ensure that when the enemy detects the missile’s launch it cannot ‘jam’ the missile with electronic countermeasures

But it’s not its high speed or the protection of its homing device against electronic countermeasures that makes the Onyx a super-modern weapon.
Once it is launched from the submarine, the missile finds the target by itself. After determining their coordinates, the missiles ‘wait’ until the last one is out of the launch tubes and then line up, just like a wolf pack, and begin to ‘home in on their prey’. The designers are not really advertising this point, but it’s the missiles themselves that decide which missile attacks which target and how. The missile ‘pack’ decides these targets, classifies them in terms of importance, and selects the tactics for the attack and the plan for its execution.

In order to prevent mistakes, the missile’s on-board computer system is programmed with electronic data on all modern classes of ship. This is purely tactical information – for example, on the class of vessel. This enables the missiles to determine what they are up against, whether it be an aircraft-carrier or landing group, and then to attack the main targets within the group. The Onyx missile’s on-board computer also holds data on how to counter the enemy’s electronic warfare systems, which can divert a missile from its target, and systems for evading anti-aircraft defence systems.

At the same time, like wolves in a real pack, the missiles themselves decide which one of them is the main attacker and which one must take the role of the decoy to lure the enemy’s aircraft and air defence systems away. Once the main selected target has been destroyed, the other missiles immediately redistribute the combat assignments between themselves and begin to destroy other vessels. There is no ship in the world that can dodge an attack by Onyx missiles. Yes, ship-borne radar systems can detect that they have been launched, but then further resistance is useless. The speed of these missiles and the way they constantly manoeuvre above the surface of the sea makes it practically impossible to intercept them with air defence systems or aircraft.

Another advantage of the Onyx missile is that it can be used with various types of carriers. In Russia, it is installed not only in submarines but also on surface vessels and mobile land-based platforms – the Bastion shore-based missile systems. It’s the presence of these systems in Syria that so worries Washington today.
Onyx will also be included in the weaponry of the Su-30MK family of fighters and the latest Su-34 frontline bombers. But the most important thing is that the next generation following the Onyx is already on its way. This is the Zircon, the first hypersonic combat missile system, for which testing is due to start next year.

TR1 wrote:Harpoons do not have range anywhere near 1200km.

You are thinking of Naval Anti-ship Tomahawk, which was retired in any case.

And which Kaliber missile Russia working with a long range beyond 2,000 km?

MOSCOW, October 8 (RIA Novosti) – Russia’s first Project 885M Yasen-class attack submarine, the Severodvinsk, will complete final trials in November or December, after which a government commission will decide whether to adopt it for service with the navy, the United Shipbuilding Corporation said Tuesday.

The submarine has completed four rounds of sea trials since May 30, the manufacturer said, adding that all the trials had been a success.

The submarine’s armament will include 3M55 Oniks (SS-N-26) and 3M54 (SS-N-27) Kalibr cruise missiles and conventional torpedoes, rocket torpedoes and mines, according to its designer, Malakhit.

The second Project 885M submarine, the Kazan, has been under construction at the Sevmash shipyard since 2009.
TR1

On November 9, 2011 Russia signed a contract for 4 Yasen class submarines to be delivered by 2016

And as the Novosibirsk was only laid downed this year, maybe ready 2020. For 3 subs.. Insane long time. Or just maybe nr 3 and 4 can come down to 4 years like Akulas in the late 80´s, they just cant continue to take 8 years per sub.

runaway wrote:On November 9, 2011 Russia signed a contract for 4 Yasen class submarines to be delivered by 2016

And as the Novosibirsk was only laid downed this year, maybe ready 2020. For 3 subs.. Insane long time. Or just maybe nr 3 and 4 can come down to 4 years like Akulas in the late 80´s, they just cant continue to take 8 years per sub.

maybe they work on another project, a lighter submarine than the yasen
TR1

Great pics of the Beast going out for the latest trials....hopefully there has been headway on the numerous difficulties encountered.
Austin

Good Luck to the crew and Yasen for the state test.
TR1

Yeah I think only Kalibr has been fired yet.

However what is curious is :

This pic indicates the tubes are vertical, not angled as suspected.
Austin

The VLS tubes were always vertical in Yasen and not angled as in Oscar.
TR1

I was under the impression they were expected to be slightly angled....this is what happens when you read too much military crap, gets mixed up

UKSK is vertical tube... only the older Granits liked to run up angled ramps on launch.
TR1

Severodvinsk shot Onix on the 8th of this month!
Austin

Austin wrote:Hmm Yes I saw that later but range of missile tested to not mentioned

I know. When you see it, when was the last time you read about the range of Russia antiship missiles for domestic use of any kind?

Such sort of information is known only in general.
TR1 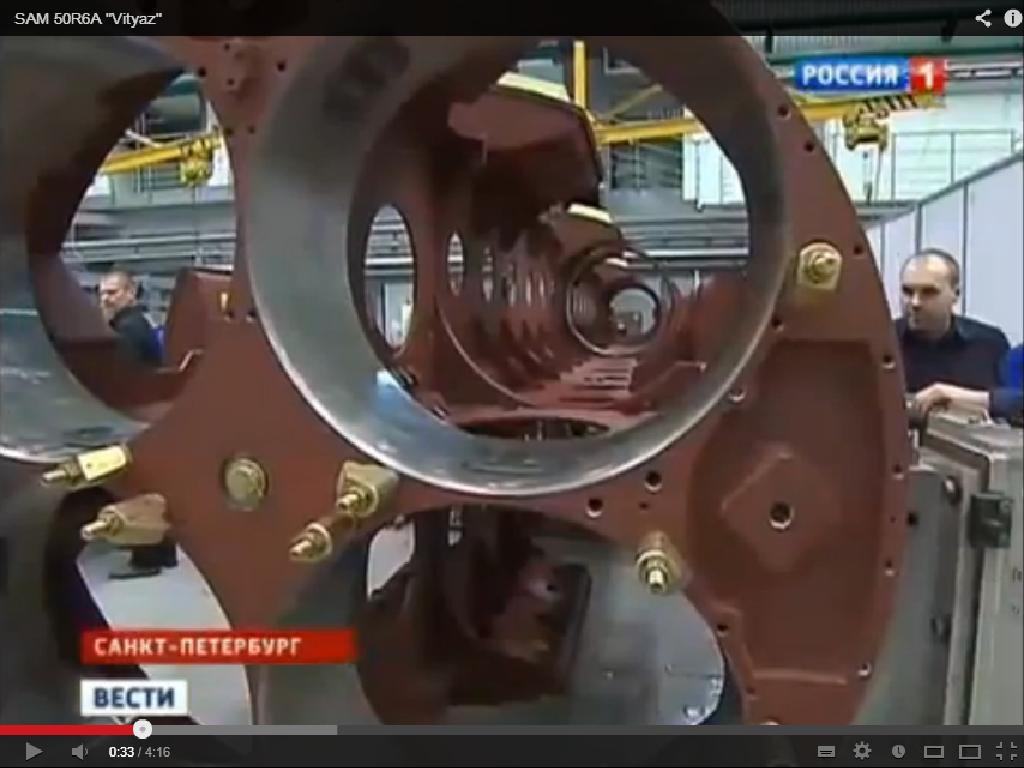