Too bad that video is so short.
George1

The first production batch of the new armored vehicles BMD-4M and BTR-MDM in the amount of 24 units passed on Tuesday, March 3, to the Russian Airborne Troops. (12+12)

The Russian Defense Ministry is set to continue the rearmament program in the armed forces this year. Infographics by TASS

Do yo have pictures of various BMD`s side by side for size comparison ? 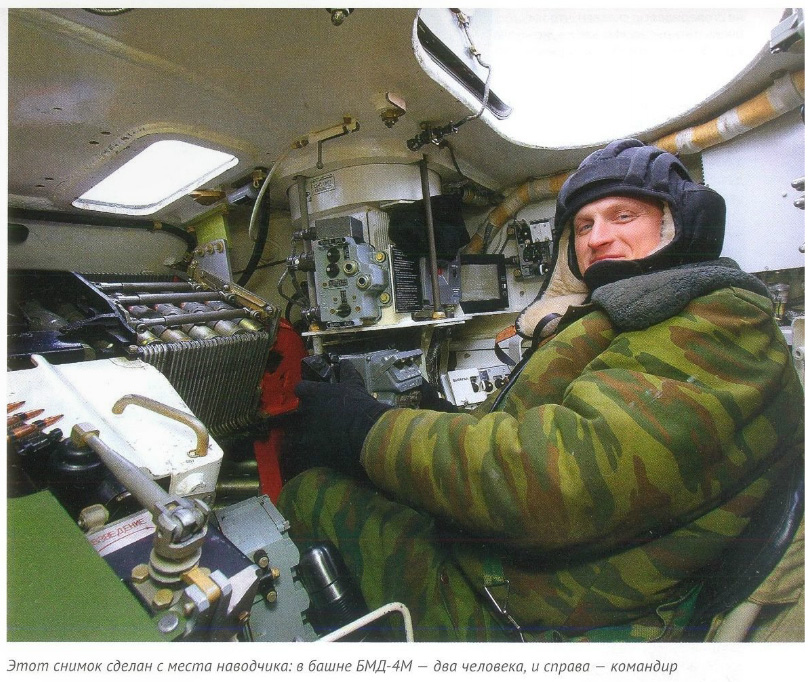 And across from his is the Commander. 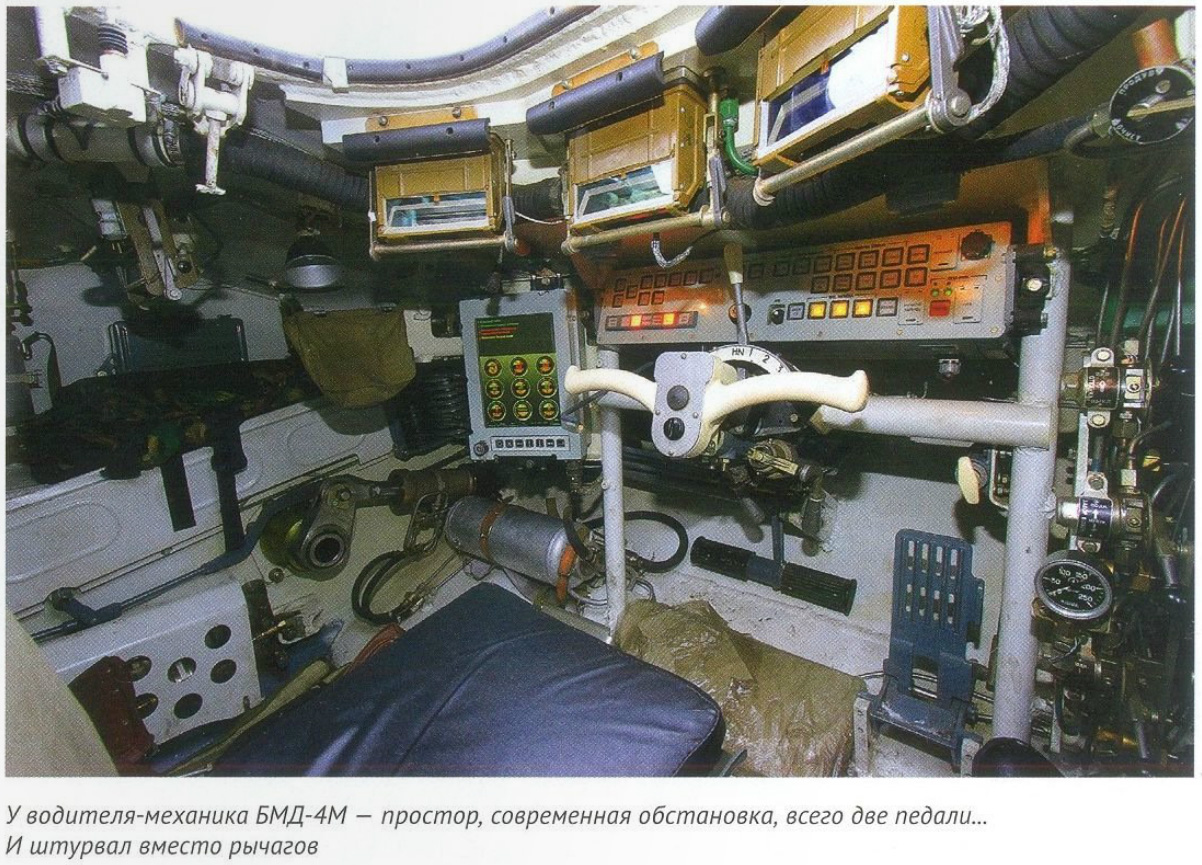 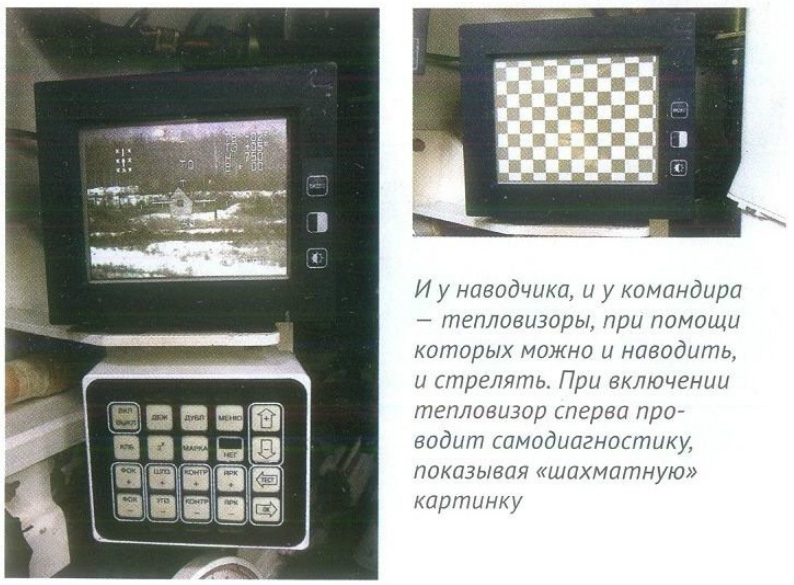 Both have thermal displays. 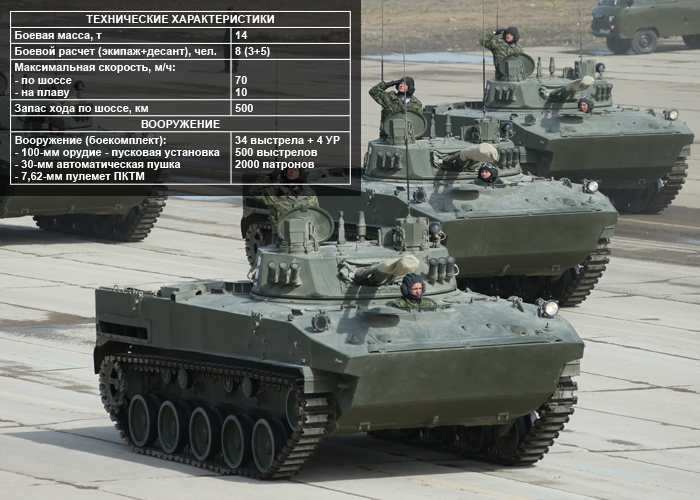 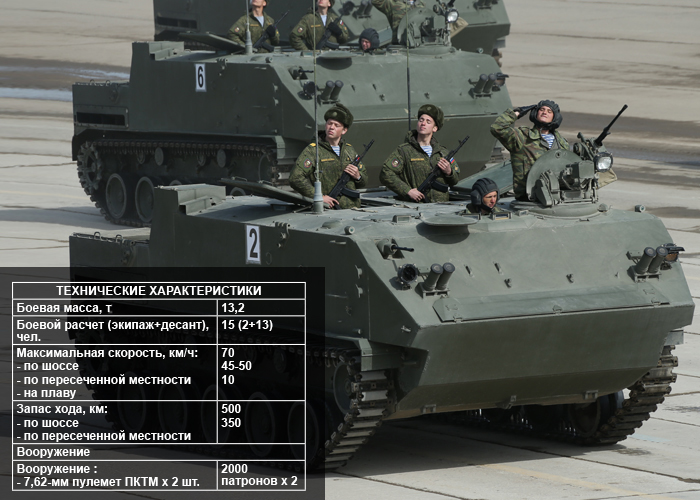 was said in the past the BTR-MD would have an AGS-17B in the hull, in the pictures it's clearly a PKT.

Question: the crew is 2, the hull PKT is thus operated by dismout? And for the cupola PKT, from a video i saw it seems to be a mecanical /analogic remote firing mount (optical and handles), so it's cheap and still useful. It's nice to see they didn't install a full electronic/stabilized RCWS.

Wouldn't it be good to keep the hull PKT but to replace the cupola weapon by a NSVT or KORD?

I'm so glad to see most of russian army vehicles these days in the full dark green color... This has to be the best color ever used on AFVs, sleek, modern. I loathe the 3 tone camo they sometimes use. When you compare this to US army who doesn't bother anymore changing the default sand paint... so ugly and innapropriate for europe.
George1 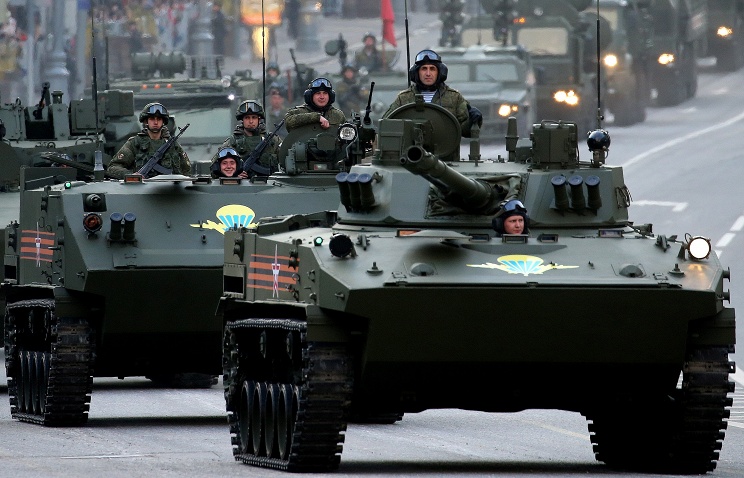 MOSCOW, May 13. /TASS/. The Russian Defense Ministry is to receive more than 250 airborne troops’ combat vehicles BMD-4M and armored personnel carriers BTR-MDM Rakushka over three years to come under a contract with the Tractor Plants concern, its first vice-president and co-owner, Albert Bakov has told TASS.

"We have a three-year contract with the Defense Ministry for providing BMD-4M and BTR-MDM. More than 250 vehicles are to be delivered to the airborne troops," Bakov said.

According to earlier reports, the first batch of the new vehicles was provided in early March. Then it was expected that Russia’s paratroop units would receive a total of 62 BMD-4M and 22 BTR Rakushka by the end of the year.

The tracked BMD-4M vehicle Sadovnitsa is an upgraded version of BMD-4, boasting a new hull, power plant, running gear and some other parts and components. It is armed with the combat module Bakhcha-U, developed by a Tula-based design bureau. It consists of two 100 mm and 30 mm guns and a 7.62 mm machinegun.

The parachutable armored personnel carrier BTR-MDM Rakushka is also based on the BMD-4 chassis. It is expected to substitute for BTR-D, which entered duty back in the 1970. Machineguns are Rakushka’s main armaments.

Question: the crew is 2, the hull PKT is thus operated by dismout?

AFAIK the hull weapon is fired by the driver who has a button on his steering controls, and I believe it is dismountable... but would not have a front iron sight... some sort of rail mount and optics would of course solve that... or a replacement barrel with a front iron sight would do the job.

Note when the PKT replaced the SG-43 as coaxial MG rather than recalibrate all the optics of all the vehicles they just made the barrel longer and heavier to emulate the ballistics of the SG-43.
George1

Asked where the new combat vehicles will be delivered first, he named the training base of the Ryazan Airborne School, and then the school’s 137th base regiment. This year, the military plan to "get from the industry a battalion set comprising more than 30 BMD-4M airborne combat vehicles," said the commander.

According to previously reports, under the 2014 contract, the Russian Defense Ministry will receive more than 250 BMD-4M vehicles and Rakushka APCs within three years. This year, in particular, the Airborne Forces are expected to receive a total of 62 combat vehicles and 22 armored personnel carriers.

The tracked BMD-4M Sadovnitsa vehicle is a modernized version of the BMD-4 with a new body, engine, chassis and other units. It is equipped with the Bakhcha-U combat unit, comprising 100-mm and 30-mm calibre guns and a 7.62-mm machine gun.

The Rakushka vehicle was also created on the basis of BMD-4 and is intended to replace the BTR-D vehicle that had been put into service back in the 1970s. The main armament of the armored personnel carrier is a machine gun.
Cplnew83

George1 wrote:
The Rakushka vehicle was also created on the basis of BMD-4 and is intended to replace the BTR-D vehicle that had been put into service back in the 1970s. The main armament of the armored personnel carrier is a machine gun.

The Rakushka is the BMD-4 based replacement for the troop transport BTR-D and is sometimes called the BTR-DM and has no turret...

The Rakushka is the BMD-4 based replacement for the troop transport BTR-D and is sometimes called the BTR-DM and has no turret...

You're right, I wanted to say hatch mounted and not turret mounted.
George1

KUBINKA /Moscow region/, June 16. /TASS/. The modernized BDM-4M airborne combat vehicle and the BTR-MDM armoured personnel carrier are successfully through with the program of state trials and will be put into service in 2015, Mikhail Chemezov, a deputy head of military hardware department of the Tractor Plants corporation, the manufacturer of these vehicles, said on Tuesday.

"State trials of the BDM-4M and BTR-MDM are over, the state commission has recommended these vehicles for passing into service. I hope the defense ministry will take them into service this year," he said, adding that an ad hoc commission dealing with adopting design documents for the organization of mass production would begin its work on June 22.

Chemezov said the corporation was currently engaged in development works to create a modernized self-propelled anti-tank gun on the BMD-4M platform. The vehicle is to be an amphibian tank.

It is also planned to create a series of mobile control centers for the airborne troops. "Mobile missile defense control centers and artillery fire control centers are being developed on the BMD-4M platform," Chemezov said, adding that the Tula plant was developing radiation and chemical reconnaissance machines on the same platform.
George1

Deputy commander of the Airborne Troops of the Russian Federation: the new BMD-4M will be able to parachute in the Arctic
eehnie

George1 wrote:Deputy commander of the Airborne Troops of the Russian Federation: the new BMD-4M will be able to parachute in the Arctic

It makes a lot of sense to me to think that the Airborne Troops can be the land forces for the Russian Islands without land communication ways (tunnel or bridges) with the continent, except Sakhalin (that should have too land communication ways with the continent). Good to see that the new armored vehicles of the Airborne Troops can work by this way.

In my view, the other clear role that can be solved with the Airborne Troops is the work outside of Russia (in UN missions,...) in areas without contact with the Russian mainland. In this case with reserve units and reserve armored vehicles. I tend to assume that the Russian Army is able to create fast a situation of superiority in every place of the Russian mainland vs every possible adversary.

Commander: Airborne end of the year plan to get 80 new BMD-4M and BTR "Shell"
George1

An article and pictures of the new BTR-MD, sucker looks roomy inside;
https://translate.googleusercontent.com/translate_c?depth=1&hl=en&rurl=translate.google.com&sl=auto&tl=en&u=http://topwar.ru/85727-reportazh-o-bronetransportere-btr-mdm-rakushka.html&usg=ALkJrhiBl-tZd9w8h1ORSmzx8yIpP1KgeA
Guest

"The trials of the advanced Russian-made RKhM-5M chemical reconnaissance vehicle are in progress, Airborne Force spokesman Lieutenant-Colonel Yevgeny Meshkov said on Friday, November 27, 2015. The vehicle is furnished with special equipment to monitor the situation and search for radiation, chemical and biological threats to the Airborne Force’s NBC protection units, the spokesman added. "The prototypes of the advanced chemical reconnaissance vehicle designed for the Airborne Force are currently undergoing dynamic trials. The trials are being conducted to check whether the vehicle can be airdropped with all the equipment and the crew onboard with the use of special multi-canopy parachute systems," Meshkov said. 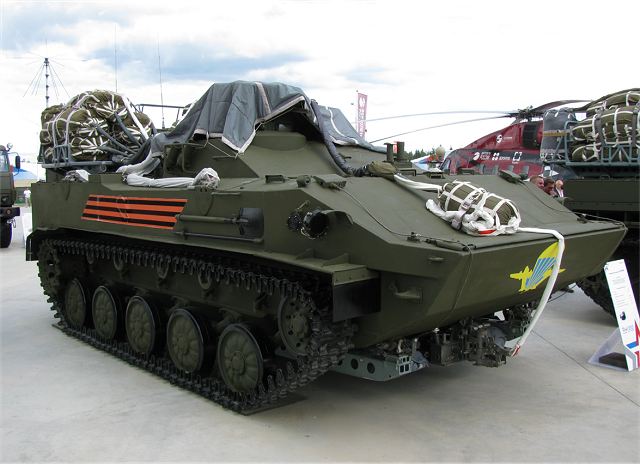 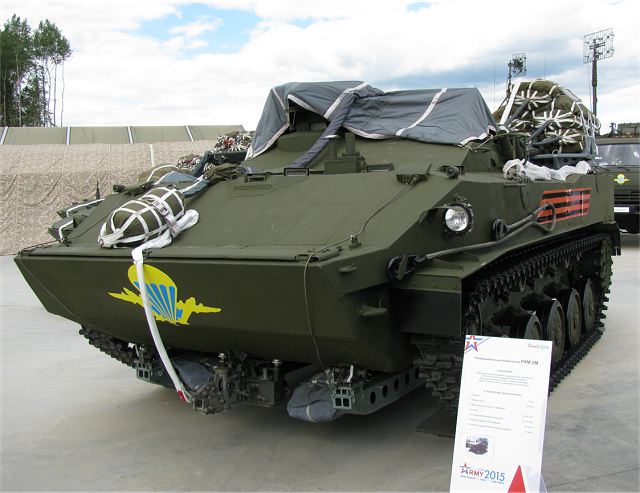 The vehicle can monitor the situation at a radius of up to 6 kilometers (3.7 miles). The vehicle’s design provides protection for its crew from effects of mass destruction weapons. The chemical reconnaissance vehicle can be airdropped with its crew onboard from transport aircraft with the use of rocket-assisted and multi-canopy parachute systems. The vehicle has a weight of 13.2 tons, a length of 6 meters, a road speed of 70 km/h (43.5 mph), a water speed of 10 km/h (6.2 mph) and endurance of 500 kilometers (310.7 miles). The RKhM-5 chemical reconnaissance vehicle is armed with the PKT 7.62mm machine gun with an ammunition load of 1440 rounds. The vehicle’s crew totals three."

Russia Will Rearm Airborne Troops With New Armored Vehicles by 2025

The number of advanced airborne assault vehicles and multirole armored personnel carriers will allow Russia's Airborne Troops to fully replace all outdated machines by 2025, according to the Kurganmashzavod arms plant.

"At the moment a contract on the supplies of advanced BMD-4M airborne assault vehicles and multirole Rakushka armored personnel carriers with the Russian Defense Ministry is implemented. The number of vehicles produced by 2025 will allow the Airborne Troops to fully replace all outdated BMD-2 airborne assault vehicles and BTR-D armored personnel carriers," Aleksander Klyuzhev told RIA Novosti.

Klyuzhev added that both new Rakushka and BMD-4M vehicles had huge export potential and foreign clients had already expressed interest in them.

Russia is planning to modernize up to 70 percent of its military hardware by 2020. Total modernization program cost is estimated to reach about 20 trillion rubles (some $280 billion).


The machine antitank artillery "Robot" on the basis of a multi-purpose armored desantiruemye "Rakushka" is currently being tested, said Commander of the Airborne Troops Colonel-General Vladimir Shamanov.

I like the bit about making the bodies in an old shipyard.

20 January 2016 JSC "Volgograd tractor factory" (VGTZ, is included in LLC "Concern "tractor plants", GTC) called for the commander of Airborne troops of Russia Colonel-General Vladimir Shamanov. He chastnosti, said that the issue of adopting a new fighting vehicle of landing (BMD-4M) will be resolved in the next few days. According to him, all the documents are agreed with all agencies and is located in the office of the government. "Literally at the output resolution of the government of BMD-4M and BTR-MDM (Shell)," - said the commander of the VDV (quote given by the Agency TASS). During his visit to the airborne company commander also inspected production facilities and experienced on-the-go BMD-4M.

From bmpd note that the actual production of buildings is carried out independent of BMD on the production site. Welding of shells is carried out at JSC "Volgograd shipbuilding plant" (former Krasnoarmeiskaya shipyard). The distance between sites is about 90 km away. All units for BMD-4M, in addition to transmission, are made on VGTZ. And transmission, unified with the BMP, will be assembled at OJSC "Kurgan machine-building plant" and ready to deliver to Volgograd. The company also has its own KB, which has recently produced a rejuvenation of the staff and extended staff.

Our blog publishes photos from this event, photos courtesy of the press service of JSC "Concern "tractor plants".
Sponsored content