Maybe its the bribes.
Big_Gazza

I'd be glad to see the end of the FGFA as its not really in Russia's interests. The Indians are a shifty lot, too oily and obsequious for my liking. They want everything for nothing, and then they make yet more demands after the fact. Su-57 and related technologies should be reserved for Russian forces only. I don't trust the wobble-heads as far as I can throw them when it comes to preventing Muricans and their agents from having access to FGFAs (remember the Nerpa/Chakra incident?), and tech transfer is simply not even something to consider.
kvs

The US never allowed exports of the F-22 to even its NATO allies. The Su-57 is Russia's improvement on the F-22 so
why in Hell should it share (even for $500 billion) it with anyone. Please get real, and quick.
Isos

kvs wrote:The US never allowed exports of the F-22 to even its NATO allies.   The Su-57 is Russia's improvement on the F-22 so
why in Hell should it share (even for $500 billion) it with anyone.   Please get real, and quick.

And they had to stop its production because it was too expensive. Exporting means reducing the price.

FGFA was not a russian product. It was meant to be developed by indians. They would have only used the design and engines while everything else had to be from infia industry so Russia wouldn't have put su-57 in danger.

But they would have helped their bigest client become a competitor instead of client.
Austin


P.S. Raghavan, Convener, National Security Advisory Board, told The Hindu that the U.S. could not seek to sustain a strategic partnership with India while trying to weaken India at the same time. “CAATSA is aimed at every country that has military and energy connections with Russia. And while the U.S. may claim it has a strategic motive, it cannot deny it has strong commercial objectives behind it. Basically, the U.S. is saying don’t go to them [Russia], come to us [U.S.],” Mr. Raghavan, a former Indian Ambassador to Russia, said.

U.S. can’t offer anything that can compare to the S-400 (air defence missile system) for India. Add to that, its processes are much more complicated. While the Russian government’s nod allows the contract to proceed, in the U.S., the private companies have hesitations, the U.S. Congress, the DoD, State department, White House etc can object and scuttle any deal,” Ambassador Raghavan said

According to the magazine "Jane's Defense Weekly" in the article Rahul Bedi "India withdraws from the FGFA project, leaving the country to go it alone", the Indian Air Force decided to suspend its participation in the already existing 11-year history of the joint with Russia program for the creation of a prospective fifth-generation fighter Fifth Generation Fighter Aircraft (FGFA) on the basis of the Russian project PAK FA (T-50, Su-57). The reasons are "insurmountable differences" in terms of cost and technical solutions for the FGFA program. 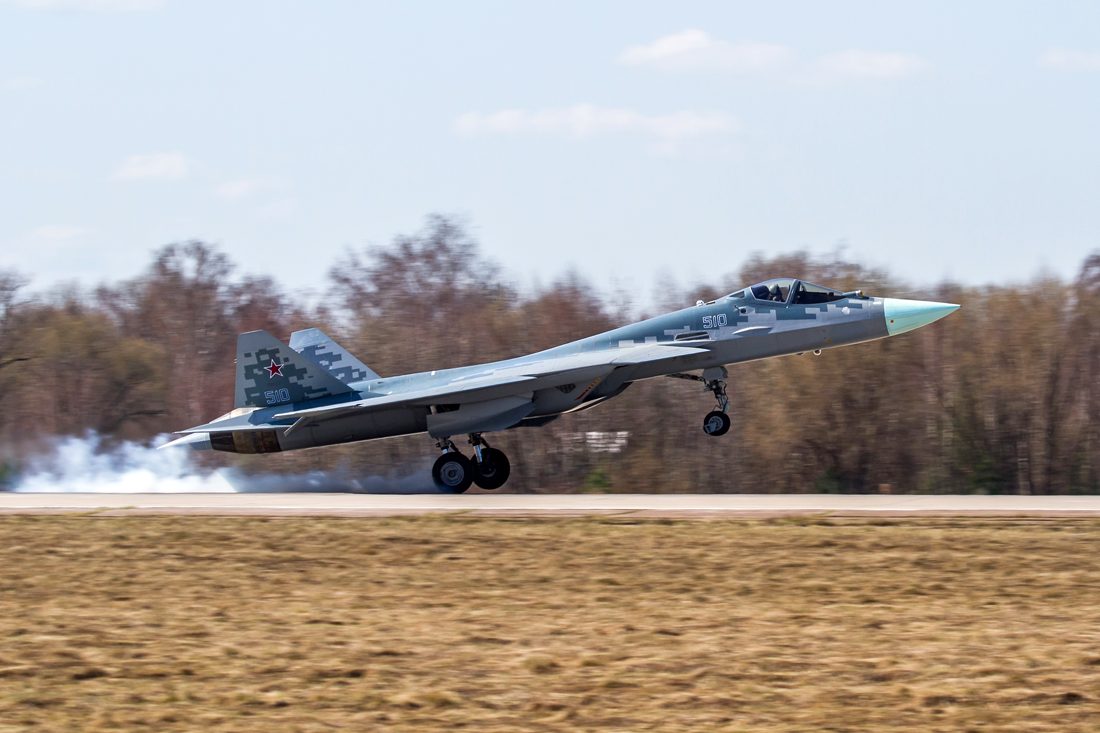 The article quoted Indian official sources as saying that Indian officials, including National Security Advisor Ajita Dovala and Secretary of Defense Sanjayte Mithra, recently reported that India had withdrawn from the program of a Russian ministerial-level delegation visiting India.

At the same time, it is considered (without details) that India can still "review" its decision on the FGFA program or acquire fully developed and ready fighters of the PAK-FA after they go into service with the Russian Air Force.

According to representatives of Indian industry, the FGFA program was not discussed during the visit of Indian Defense Minister Nirmala Sithmaran to Moscow in early April.

"The FGFA project has become an example of how too little, too late," said the Indian Marshal of Aviation in retirement VK Bhatia. According to him, the further implementation of this program would not have benefited the Indian Air Force, struggling to resist the rapid reduction in the number of its fleet of fighters.

The Indian Air Force believes that the Su-57 (T-50, PAK FA) fighter, which the Indian Ministry of Defense has identified as a promising multi-role fighter, does not meet their requirements for low-levelness, avionics, radar and sensors. Seven [in fact ten] prototypes of PAK FA are currently undergoing flight tests in Russia, but so far there is no indication as to when this platform will go into mass production.

In its considerations regarding the cancellation of the program, the Indian Ministry of Defense concluded that the FGFA would absorb a significant portion of the Indian Air Force's financial resources as part of the development program at the international level, at a time when they desperately need to organize national production and modernization. The Ministry of Defense also ignored the claims of the Indian aircraft corporation Hidustan Aeronautics Limited (HAL) that the experience of participation in the FGFA will benefit India in creating its own fifth-generation fighter in the program. Advanced Medium Combat Aircraft (AMSA).

The FGFA program was launched in 2007 jointly with the Russian company Sukhoi on the terms of an equal financial and partial technology partnership, but from the very beginning it was experiencing problems.

In 2010-2011, India paid $ 295 million for a draft FGFA project, but in mid-2013 Russia demanded an additional $ 5 billion as India's share in the cost of further development of the fighter, which the Russians estimated at about $ 10 billion.

India refused to pay, but at the beginning of 2016, it seemed that agreement was reached on a compromise, according to which both sides contributed $ 3.7 billion on each side, which must be paid within 6-7 years, for further development FGFA by gradually taking into account the requirements of the Indian Air Force. These requirements included about 50 modifications, such as replacing the AL-41F1 engines of the development of NPO Saturn with more powerful ones, reducing the visibility and improving the suspension system of weapons [apparently internal]. The Indian Air Force also requested a prospective version of the Belka on-board radar [H036] with AFAR, improved maintenance capabilities and additional self-defense capabilities.

Sources in the Indian industry said that Sukhoi also agreed to share with HAL important information on the FGFA project, previously classified, and try to restore the share of HAL work in the program, which was reduced by more than half to about 13%. This included the development of the HAL chassis of a fighter, basic navigation equipment, suspension containers for laser targeting, an indicator on the windshield and a radar cooling system.

Sukhoi also committed to supply the Indian Air Force with three 30-ton single-seater FGFA prototypes until 2019-2020 to test before the production line of these fighters at the HAL facility in Nasik in western India.

Initially, the Indian Air Force planned to acquire 200-250 single and double FGFA license fighters, with deliveries that were scheduled to begin in 2017-2018. Later, the number was reduced to 127 single-seat aircraft, but now the whole program is canceled.

On the bmpd side, we recall that, in accordance with Russian sources, cooperation on the Russian-Indian FGFA fighter project (the Russian designation of the PMF is a Perspective Multipurpose Fighter) based on the fifth-generation Russian PAK-FA (T-50, Su-57) fighter. The very beginning really developed problematically. The agreement on the joint development of the FGFA in the interests of the Indian Air Force was reached at the second meeting of the Russian-Indian intergovernmental commission for military-technical cooperation in February 2002. After the Indian side made sure of the real progress of the PAK FA program, an intergovernmental agreement was signed in November 2007 on the joint development of FGFA by the forces of PJSC "Sukhoi Company" and Indian HAL. "In December 2010, Rosoboronexport, Sukhoi and HAL signed a contract valued at $ 295 million for the sketch-and-technical design of the FGFA fighter for 18 months, the total cost of R & D for the program was estimated at $ 6 billion, of which the Indian side was to account for 35%.

In 2010-2011, the Indian side announced its intention to acquire 214 FGFA fighters, of which 48 to 66 were to be two-seat aircraft (unlike the Russian T-50, for which the creation of a two-seat version is not planned), with the production of all at the enterprise HAL in Nasik and with the beginning of deliveries in 2017. However, later India also refused to create a double version of the FGFA, and preliminary procurement plans for this aircraft were reduced to 144, and then to 127 units, while the total cost of the program for India was estimated at $ 30 billion.

Since 2012, the development of FGFA has actually been in a "dangling" position due to problems with mutual financing and technology transfer by the Russian side. At the beginning of 2016, there were reports of agreement reached by both parties to continue work on the joint development and production of FGFA, with the assumption of allocating $ 3.7 billion to each of the parties for R & D (including $ 1 billion in the first year) . However, a formal agreement on this has not yet been signed.

As one can judge, after encountering technical and financial difficulties in implementing such a complex program, Indian ambitions were reduced from the dreams of a "more perfect and mostly Indian fifth-generation airplane" based on the PAK FA, to obtaining the actual export version of the T-50 created by the preferential for a Russian account and equipped mainly with Russian equipment. In these conditions, the Air Force and the Ministry of Defense of India, already faced with a shortage of funds for the purchase of combat aircraft, simply do not have incentives to participate in the FGFA program, and the Indian approach in recent years has been characterized by the desire to completely abandon all costs for the development of a fifth generation Russian fighter side, so that in the event of the success of the T-50 program, then "come to the ready" and buy the already used fighters. Moreover, there was information about India's interest in the possibility of acquiring Su-35 fighters.


A $9-billion deal to codevelop a next-generation fighter aircraft with Russia fell through after Defence Research and Development Organisation (DRDO) shot it down saying it either had all the technologies such a project would bring to India or was in the process of developing these indigenously.

"I hope very much our talks will be ultimately crowned by the designing stage and we will develop our joint fifth generation aircraft," UAC CEO said

India is not withdrawing from the joint project with Russia for the development of a fifth generation fighter jet, Yuri Slyusar, president of Russia’s United Aircraft Corporation (UAC), said on Sunday.

"We continue to discuss with India joint development of a fifth generation fighter jet. The topic is not closed. It has been said that India is withdrawing from this project. No, they are not," he said in an interview with the Deistvuyushchiye Litsa (Political Actors) program on the Rossiya-1 television channel.

"I hope very much our talks will be ultimately crowned by the designing stage and we will develop our joint fifth generation aircraft," he added.

India’s Economic Times newspaper said earlier that India planned to withdraw from the joint project with Russia for the development of a fifth generation fighter jet as India’s Defense Research and Development Organization (DRDO) claimed there was every possibility to develop corresponding technologies independently.

An agreement on such a project was reached in 2007. The fifth generation fighter jet is being developed on the basis of the Russian Su-57 fighter jet with account of the Indian side’s technical requirements. It is planned that the launch customer will be India’s Air Forces. Later on, such jets will be sold to third countries.

I had the article saved in my other OS, on my now damaged HDD.