This aircraft will be important.

Details about the U.S. Air Force's new, secret B-21 Raider stealth bomber have so far been limited, but some have emerged since the service announced that it had picked Northrop Grumman to build it 2015. However, since then, there has only been a single piece of official concept art of the aircraft – that is until now.

I remebered the german Horten Ho 229 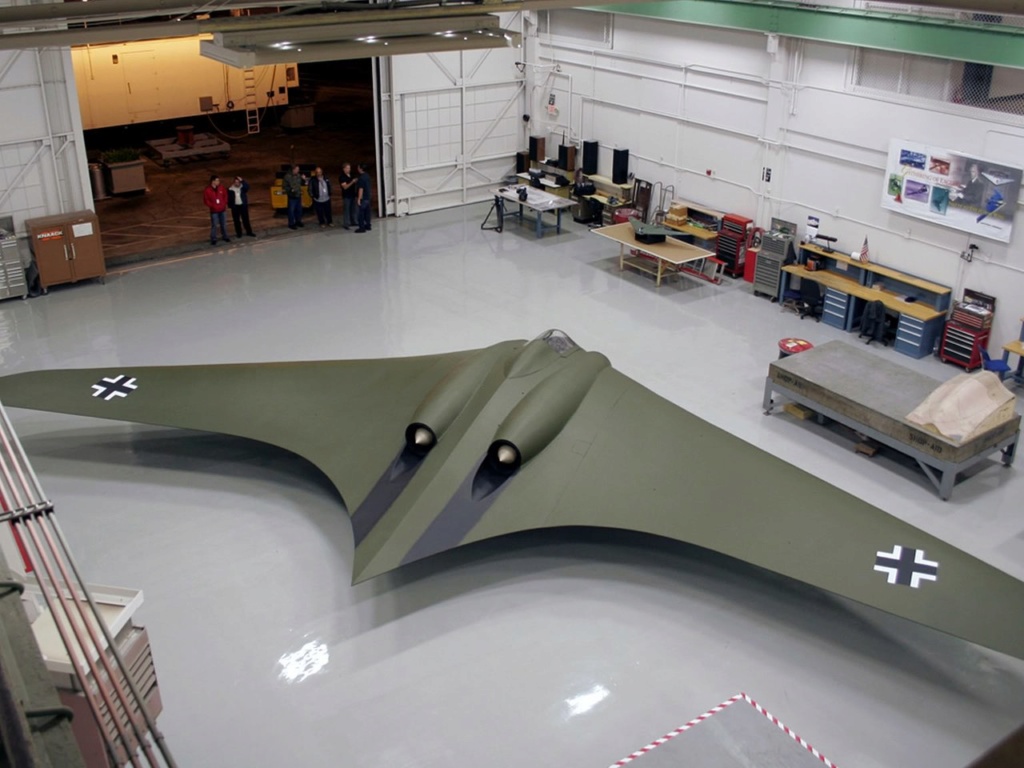 JohninMK wrote:This aircraft will be important.

Details about the U.S. Air Force's new, secret B-21 Raider stealth bomber have so far been limited, but some have emerged since the service announced that it had picked Northrop Grumman to build it 2015. However, since then, there has only been a single piece of official concept art of the aircraft – that is until now.

I wonder if we have any concept art of it's climate controlled hangars where it'll spend 40 hours in maintenance for every hour of flight time? Also it's funny you posted The Drive, one of the most infamous publications for Su-57 slander. Recently there's been not so flattering images floating on the internet of the F-22 with ram coatings resembling shattered glass and ruined Greco-Roman mosaic bath tiles....but surely in that state it's still more stealthy than the the Su-57.

Trash talkers and those that denigrate are themselves inferior. Back during WWII Russian children were manning metal lathe machines
and similar making munitions and aircraft parts for the war effort. In the Reich children were outfitted with machine guns. Tell
me which takes more IQ to use.

The flying wing is over-rated "stealth". It is OK from side angles but sucks from the top and the bottom regardless of any RAM coating.

Imagine the outcry in the west if the PAK DA looked like the Tu-160... I am wondering why they bother to include the 1 at the end... this is just a B-2 isn't it?

For the US stealth is critical because they want a first strike system to cut the heads off the third world countries they invade when they can't regime change.

For Russia their flying wing PAK DA just needs to be relatively stealthy from distance... when releasing 5,000km or 10,000km range cruise missiles at US targets from 1,000km off the coast its lower stealth requirements will be good enough to keep them safe but most importantly will be cheap enough so they can make enough of them to make an actual difference...
JohninMK

Steve Trimble
@TheDEWLine
·
Mar 27
Two new details about the B-21:

1) "The B-21 engine noise is expected to be quieter
than the B-1B and about the same or quieter than
the B-2."

2) "The B-21 is not expected to use low altitude
training routes."

1) "The B-21 engine noise is expected to be quieter
than the B-1B and about the same or quieter than
the B-2."

2) "The B-21 is not expected to use low altitude
training routes."

So many un-necessary words in point number one... what it should be abbreviated to is:

The really amusing thing is that they admit low altitude operations is hard on aircraft and no longer offer any ability to hide from Russian air defences...

Rather expect the emphasis to shift from sneaking under the radar to standoff weapons firing from a distance.... a bit like Israeli F-35s are in Syria...

Of course it means the new bomber will need to be able to carry a real shit-ton of munitions to penetrate defences... or maybe their space forces will be getting a hypersonic atmosphere skipping bomber... 10 trillion dollars and they will make it happen...
JohninMK

Also America: Home of four scheduled public hearings to be broadcast live on the Internet in Oct to discuss environmental impact of that mostly classified stealth bomber program.


We still don't know what P&W engine powers the B-21, but now we know its noise contours for takeoff and landing.

And now we also know the B-21 is "projected to use higher airbands" than normally used for commercial air traffic, so above 41,000ft or so.


An old but still interesting article on the B-21

In the United States, they are making proposals and voicing their intentions for a new stage in the renewal of the country's air force. Air Force candidate Frank Kendall is pushing for the acquisition of a large number of B-21 Raider bombers. These are American promising strategic bombers with stealth function and the ability to use missiles and bombs with both nuclear and conventional warheads.

According to Frank Kendall, he is in favor of purchasing 145 of these strategic bombers for the US Air Force. This is an unprecedented number of strike combat aircraft of this type for the modern Air Force.

It was noted that this is several times (approximately 7 times) more than the quantitative composition of the B-2 Spirit bombers. According to official figures, the US Air Force is armed with 21 Spirit.

The purchase of 145 B-21 bombers will renew the fleet of our strategic aviation and gradually replace the B-1B bombers.

It is worth noting that for the first time, the words about the possible acquisition of 145 B-21s for the US Air Force were heard at the hearings in Congress last (2020) year. Then they were spoken by the chief of staff of the US Air Force, David Goldfein.

Kendall called 145 strategic bombers "a reasonable number", noting that "this number corresponds to the ability to respond to various challenges."

The program for the development and creation of B-21 Raider bombers has already cost the United States about $ 55 billion. And if initially the cost of one such aircraft was estimated at $ 500-600 million, then today in the United States they call other figures: at least $ 750 million for one B-21. Thus, the purchase of 145 of these aircraft for the US Treasury will cost at least a hundred billion.

Rachel S. Cohen
@rachelkaras
·
21h
Attention bomber design nerds: The @usairforce gave you a new rendering of the @northropgrumman B-21. Says it's $639 million per plane. https://af.mil/About-Us/Fact- 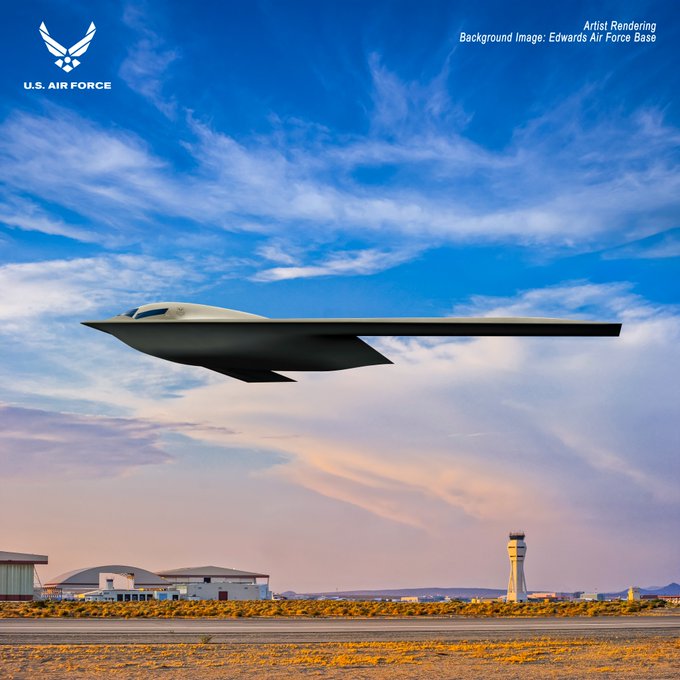 I know looks aren't everything but having seen that, I definitely prefer the B-2, especially round the cockpit (obviously it's not the real thing but it'll do) and the fact the B2 represented something new and striking whereas this owes its looks to its predecessor.


What will the U.S. Air Force bomber of the future look like?


The new stealth U.S. Air Force B-21 bomber, also known as Raider, has taken yet another key technological step toward being ready for war.

Naturally, details regarding its specific developmental nuances are not available, as it is a classified Air Force program. However, the service released a new artistic rendering of the B-21 Raider bomber with some new visual improvements.

The latest Raider artist rendering graphic does not show any significant changes to the aircraft’s general planform from the one seen in the early official rendering, but new images show a previously unseen design of the cockpit windscreen.

According to a press release issued Tuesday by the Secretary of the Air Force, the new rendering highlights the future stealth bomber with Edwards Air Force Base, California, as the backdrop. The 420th Flight Test Squadron based at Edwards AFB will plan, test, analyze and report on all flight and ground testing of the B-21 Raider.

The B-21 program continues to execute the Engineering and Manufacturing Development phase and is focused on scaling the manufacturing infrastructure and capacity across the industrial supply base to prepare for low rate initial production. A critical design review conducted in 2018 concluded the aircraft has a mature and stable design.

Designed to perform long range conventional and nuclear missions and to operate in tomorrow’s high end threat environment, the B-21 will be a visible and flexible component of the nuclear triad.

“Nuclear modernization is a top priority for the Department of Defense and the Air Force, and B-21 is key to that plan,” said Randall Walden, Air Force Rapid Capabilities Office director. “The built-in feature of open systems architecture on the B-21 makes the bomber effective as the threat environment evolves. This aircraft design approach sets the nation on the right path to ensuring America’s enduring airpower capability.”

The Air Force plans to incrementally replace the B-1 Lancer and the B-2 Spirit bombers to form a two-bomber fleet of B-21s and modified B-52s. The B-21 program is on track to deliver B-21s to the first operational base, Ellsworth AFB, South Dakota, in the mid-2020s.