George1 wrote:Over 200 combat vehicles to be airdropped as part of Tsentr-2019 exercise

For that, over 80 Il-76 military transport planes will be used

pratically two thirds of all the active il76!

But yes for such operations they need a lot of aircrafts.

We will see how many they will have a few years from now.

If they actually manage to produce 18 new il76 per year for a while, they will at least cover the needs of the VDV.

It is still to be understood how many il76 the VDV would need on a permanent basis and how many would need instead to be borrowed from other services in case of big operations like the large annual exercises or eventual large air drops to support real war operations.
GarryB

It was the VDV that was going to be the customer of the 100 An-70s the Russians were going to buy, so it is pretty safe to assume that is how many they would be needing for any particular operation...

Of course the Il-476 with its 62 ton payload might be able to carry four vehicles instead of three... but then they might adapt the Il-106 to carry 6 or more vehicles per aircraft... who knows...

One thing they seemed to train for is to capture an enemy airfield deep behind enemy lines where the ground forces would be relatively weak.

Land about 100-150km away from the airfield so they wont be sure what the target for their attack is and in such a place in the middle of nowhere the airdefences will be weak or nonexistent. With armour the mobility of the force will be excellent so they can form up and roll to the enemy airfield and take out any ground defences their might be stationed there, and once captured the airfield could be used to land heavier reinforcements that can expand the so called beach head and then start a second front line behind enemy front lines... they wont need to move in enormous amounts of equipment, but the enemy will have to reduce their forces at the front to try to deal with this so the front lines will be weakened while trying to deal with this...
Cyberspec 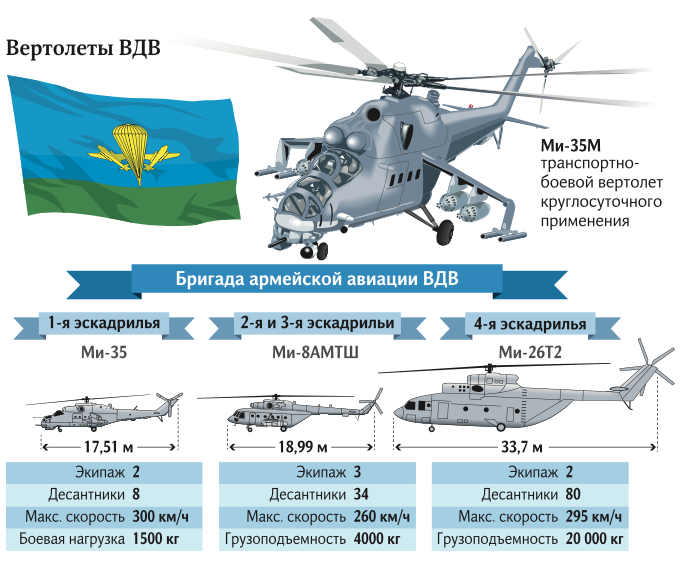 Two BMD-2 crashed while landing at the Donguz training ground at the Center-2019 exercises, in which did not work parachute system. There were no personnel in the car. 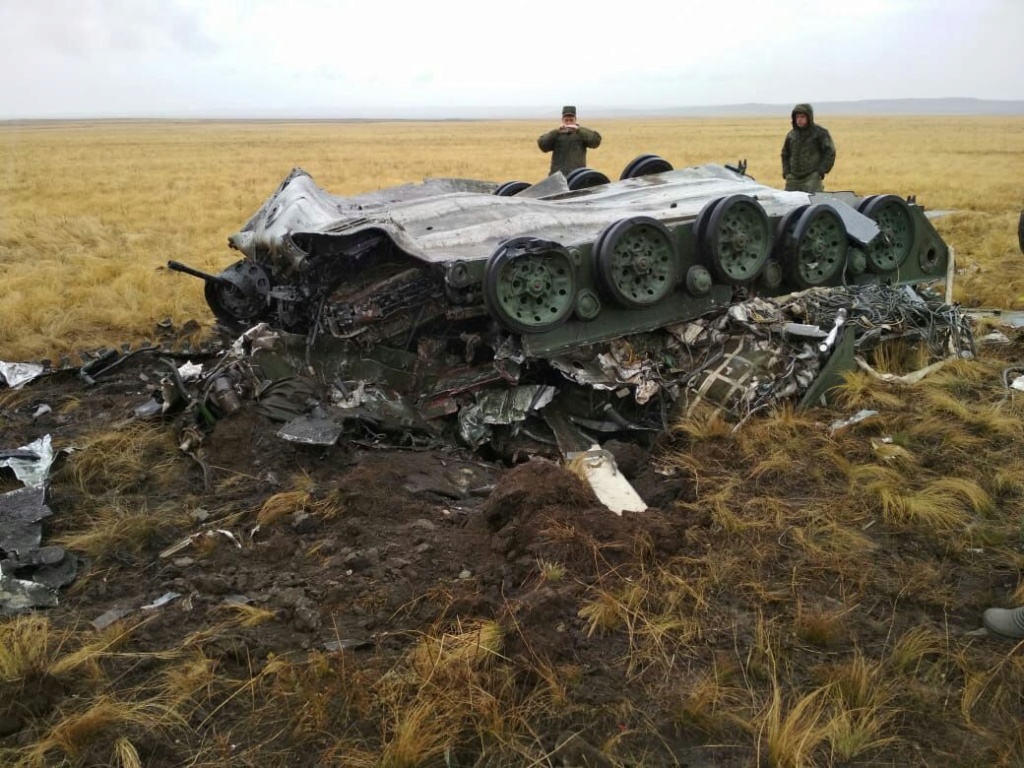 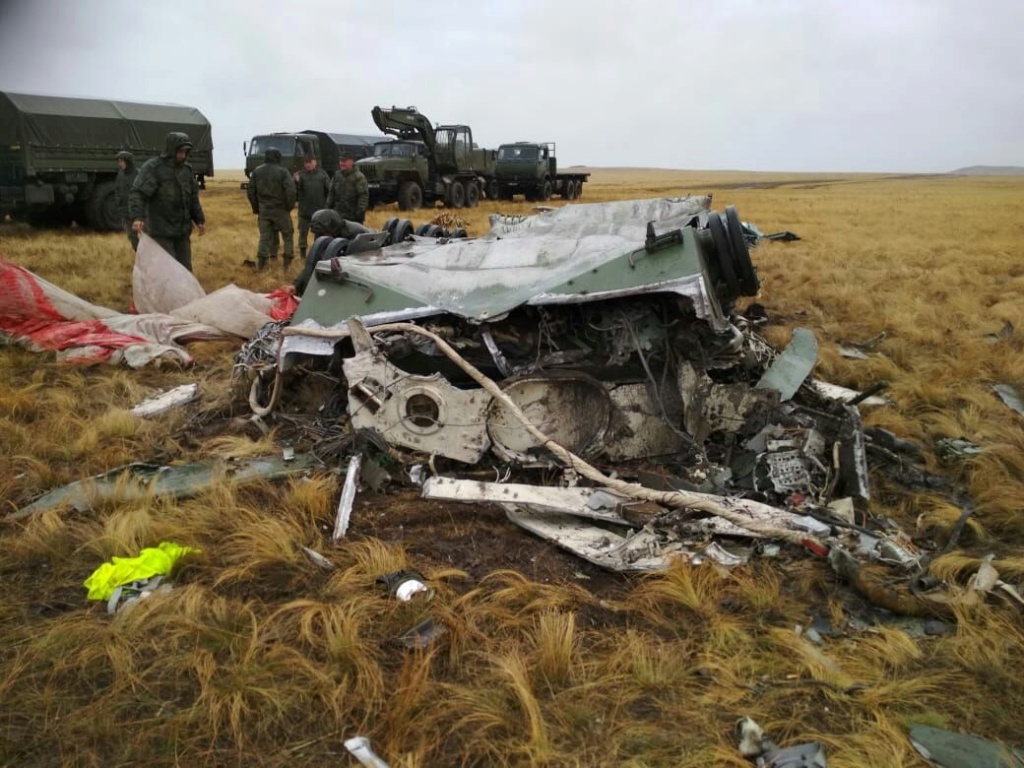 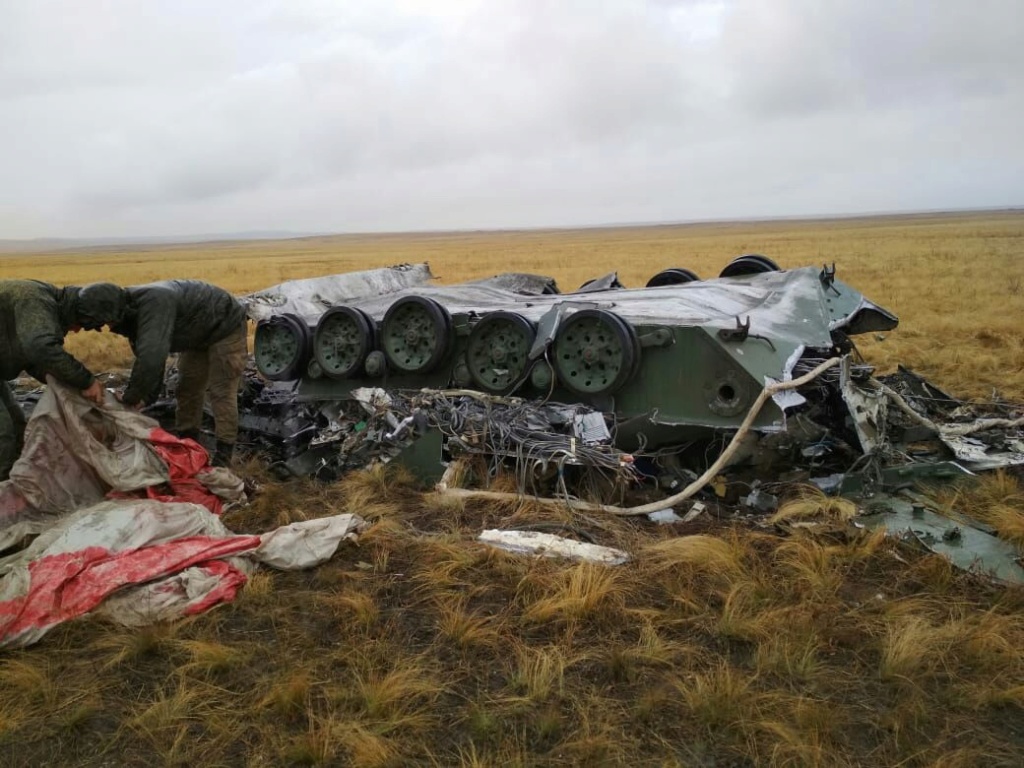 George1 wrote:Two BMD-2 crashed while landing at the Donguz training ground at the Center-2019 exercises, in which did not work parachute system. There were no personnel in the car.

One of the comments says the wind was too strong....above the recommended level for that type of parachute
PapaDragon

To their defense job description does say ''rapid insertion''

This is as rapid as it gets

Waiting for Vann to pop up and say this never happens in the British para forces... Hahaha
magnumcromagnon

But still doesn't compare to this:

Parachuting is a dangerous activity. I've witnessed 2 deaths during my time in the Army...1 was a novice who died during his 1st jump while the second one was very experienced officer with over 2000 jumps who died because of a freak accident
magnumcromagnon


For the first time a video was released demonstrating the capabilities of the latest parachute systems in Russia.


The program "Reception" of the channel "Star" spoke about the unique Russian parachutes.

Perhaps the main “hero” of the program is a parachute robot. More precisely, an automated system that controls the flight of a parachute-wing without human intervention.

The tests showed how a special unit, depending on where you want to plan, pulls the left or right brake.

As explained by the chief designer of the Ivanovo parachute factory "Flight" Alexei Kozin, this system can deliver cargo weighing up to 200 kilograms.

It is possible to land a landing from a height of 8000 meters at a speed of 140 to 350 kilometers per hour. Deviation from the indicated point upon landing is not more than one hundred meters.

The robot uses GLONASS coordinates. When landing cargo on conventional domed parachutes, such accuracy is out of the question.

Also, the program for the first time demonstrated parachute tests of high accuracy for special forces. It also has the shape of a wing, which will allow a person to adjust the planning and, if necessary, fly calmly up to 30 kilometers, and with a fair wind up to 60.

Especially for "Acceptance", a special forces officer went on a risky experiment. He landed in full on the roof of the building. The slightest mistake here could result in death. But the paratrooper just landed in the designated square.

This parachute allows you to jump from an unprecedented height - 8000 meters. While the maximum threshold in the Russian army is 4000 meters.

Now this development is being tested at the FSO.

Another premiere of this program is a parachute that allows a person to land along with a cargo container weighing up to 50 kilograms.

It may contain a 52-mm mortar with two boxes of mines, ATGM "Cornet" and even a diving towing vehicle.

Looks like a new flying IVF for VDV will be modernizes Mi-8 with new engines, avionics, extra amour and weapons. At least its first edition ;-)

Hermes-A will be there too

The decision on the initiative development of a helicopter for the Special Operations Forces (MTR) was made by the Mil Plant in 2017. In May 2018, the development work under the designation “Sapsan” was approved by the defense department. Over 800 million rubles have already been allocated for these purposes. The contract for the first 10 aircraft was signed with the Russian Helicopters holding at the Army forum last summer.

new chopper part 2: what is interesting that there is no 23mm guns but 2x 12,7mm ones. Looks like 12,7mm fits better for supporting of landing forces. Recall originally Mi-24 had 4 barrel 12,7mm... Pity it is not made anymore

so in short 2x fixed and 2x door mounted Kords. 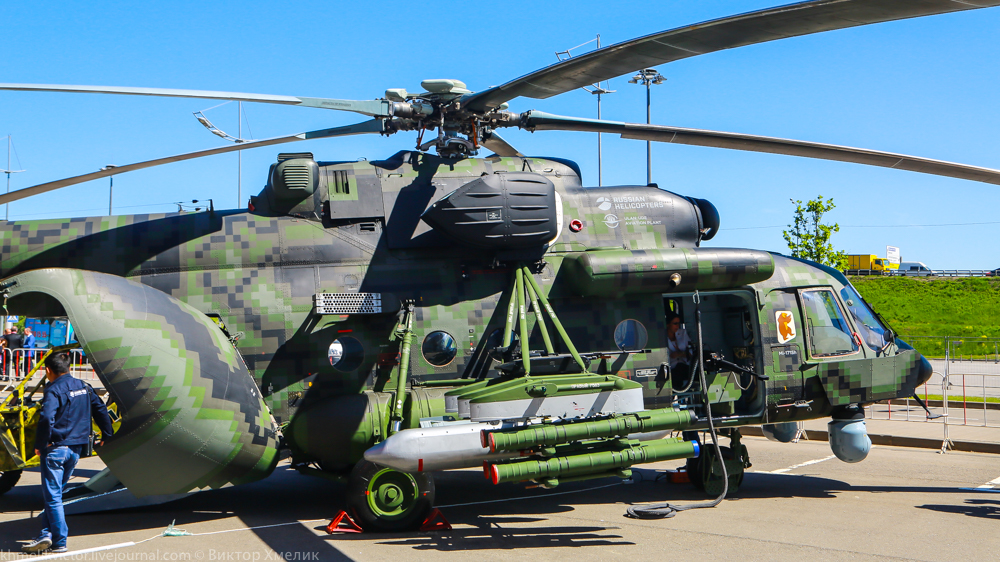 In Russia, there was developed a new helicopter for special forces

MOSCOW, January 24. / TASS /. Russian Helicopters Holding (part of Rostec) has developed a new version of the Mi-8AMTSH-VN special-purpose helicopter with enhanced weapons. This was announced to TASS on Friday by the head of the holding Andrey Boginsky.

In the summer of 2019, Russian Helicopters signed a contract with the Ministry of Defense for the supply of 10 helicopters for special forces and Special Operations Forces of the Russian Armed Forces in the base version of the Mi-8AMTSH-VN.

“We already have a modernized look of AMTSH-VN. Let's just say that with advanced options and capabilities - not even of the machine itself, but of additional equipment,” Boginsky said.

He specified that in the revised version of the helicopter, "weapons, issues of detection, target recognition" were improved. “We are talking about systems of a higher level. This is the result of the integration of the solutions that our cooperation offers,” said the head of the holding.

As TASS specified a source in the aircraft industry, the new modification received the unofficial designation Mi-8AMTSh-VN2. According to a source, the machine is an intermediate link from the Mi-8 to a promising helicopter - an airborne landing vehicle (BMD) for "new type" airborne units. At the beginning of 2019, another TASS source reported that, in the interests of the Airborne Forces, work was intensified to modernize existing helicopters and develop a new BMD helicopter.

The Mi-8AMTSH-VN in the version purchased by the military department is equipped with new flight-navigation equipment, is armed with two exchange-rate machine guns of 12.7 mm caliber on special suspension, adapted for the use of night vision goggles, and has an airborne defense complex. The cockpit and the main units of the helicopter are protected by titanium alloy armor, the floor of the cargo compartment, as well as the sides are closed with removable lightweight Kevlar armor.

and here is the basis version on Army 2018 stand. 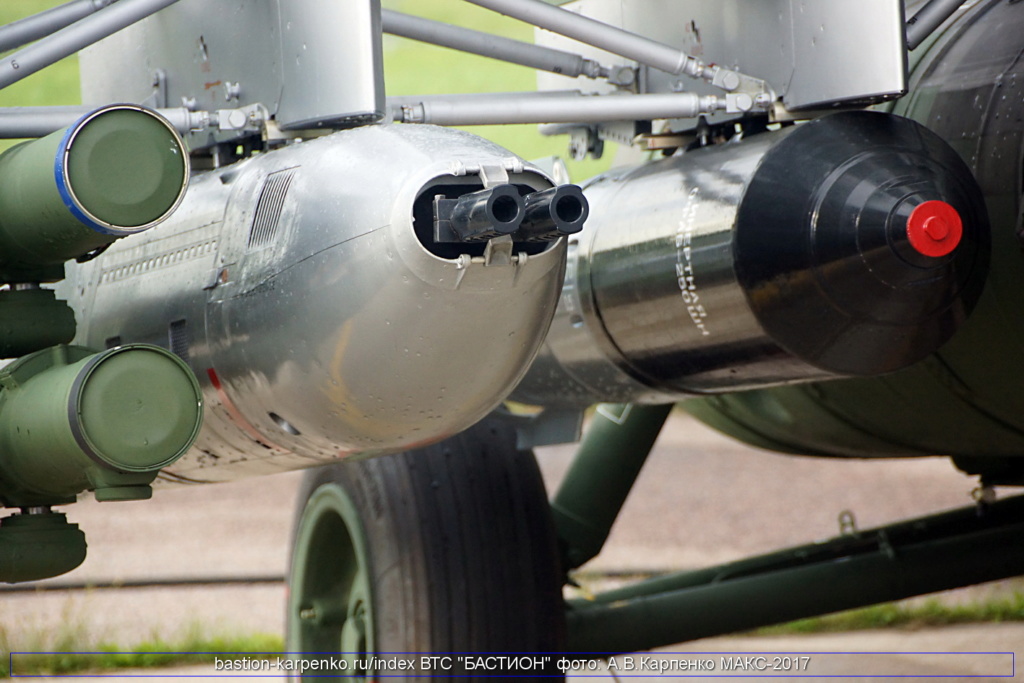 By the day, are there news about future modifications of the mi24? I remember having read that there are some news about new orders Mi35M (a mi24 variant, initially conceived for export) also for the russian armed forces.

only as an option, not fixed one though. I was referring to fixed guns. IMHO it was just interesting that in Mi-24 there was 12,7 gun, in Mi-35 2x23mm now in Mi8 win "IVF" edition they scaled down to 12,7mm. Looks like it works better for this kind of applications.
GunshipDemocracy

Rodion_Romanovic wrote:By the day, are there news about future modifications of the mi24?  I remember having read that there are some news about new orders Mi35M (a mi24 variant,  initially conceived for export) also for the russian armed forces.

I didn't hear about any orders yet only those I could find: 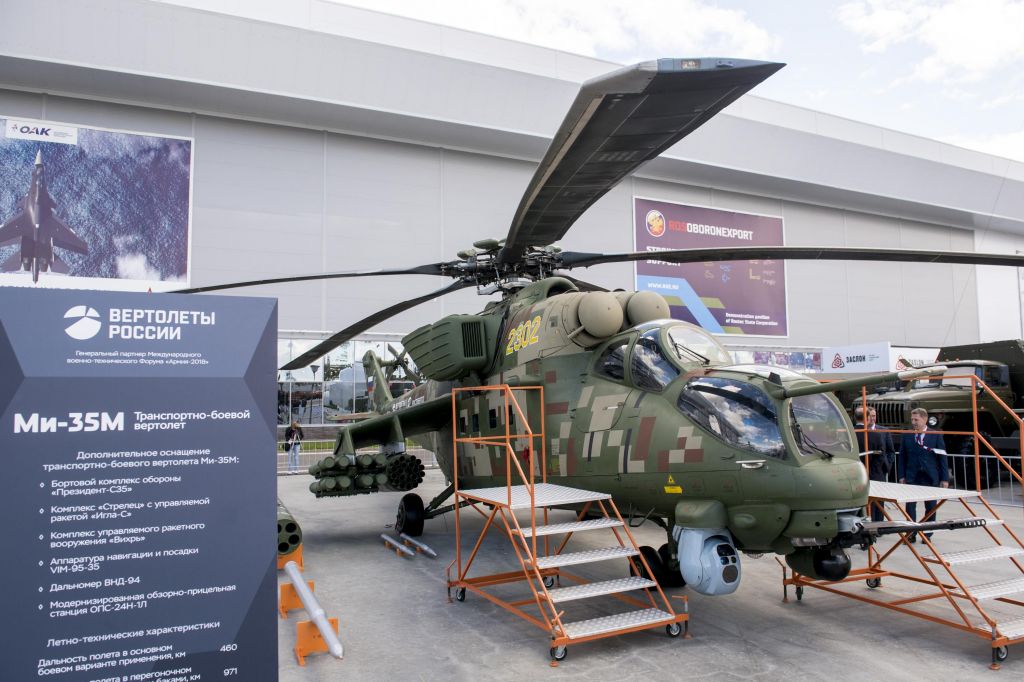 The Mi-35 is a workhorse. It would be ideal for Russia to buy more of them as it's ideal for the anti terrorist roll. Mi-28 are great but they are expensive and rather overkill imo.
Hole

only as an option, not fixed one though.  I was referring to fixed guns. IMHO it was just interesting that in Mi-24 there was 12,7 gun, in Mi-35 2x23mm now in Mi8 win "IVF" edition they scaled down to 12,7mm. Looks like it works better for this kind of applications.

The 12,7mm guns are also not fixed.
GunshipDemocracy

Actually they are. Both in article and on pictures

True, but this one here is for transport and support of VDV / special forces not gunship role.

Mi-24 are cheap. Mi-35 is as expensive as mi-28. Mi-28 offers better fighting capability and is better armoured but had more crashes than mi-35 which offers transport capability.
Hole

Hole wrote:These 12,7mm guns are installed in the same way as back in the 80´s in Afghanistan. They are as fast removed as the UPK-23-250 gun pods.

As you say, my translation might not be perfect but it looks like army requested 12,7mm to me

"equipped with 2 coaxial machine guns on a special mount"


google translate (well not perfect but you can check yourself

:
co-axial gun - a machine gun that is installed in the control unit of the combat vehicle in a fixed state (does not change its position either in the horizontal or vertical planes), which allows it to fire exclusively at the heading (direction of motion), which is the reason for the name.
GarryB

The Kords mounted on top of the wing pylons are fixed and not really much different from the 23mm gun pods also seen fitted though those 23mm gun pods have guns that can be depressed up to 30 degrees when needed. The door mounted guns are on pintle mounts and can be aimed... I was sure I read somewhere that a four barrel 30 calibre GSh gatling gun can be fitted to suppress enemy fire during landing or taking off... it is the same four barrel gatling as fitted to the Ka-29 assault helo.
George1

The recent exercise on Franz Josef Land, a Russian archipelago of largely uninhabited islands in the High Arctic on April 25. (Russian Defence Ministry)

The paratroopers jumped from an Ilyushin Il-76 transport aircraft from a height of 10,000 metres (30,000 feet) and were, according to the Russian Defence Ministry and media reports, testing new equipment developed for extreme cold weather operations. 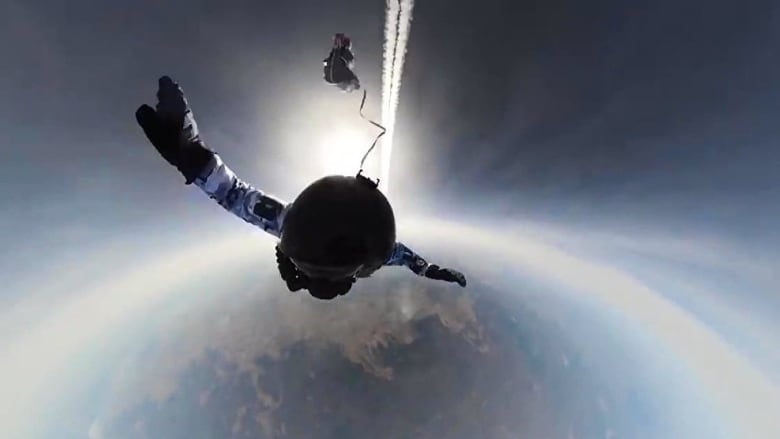 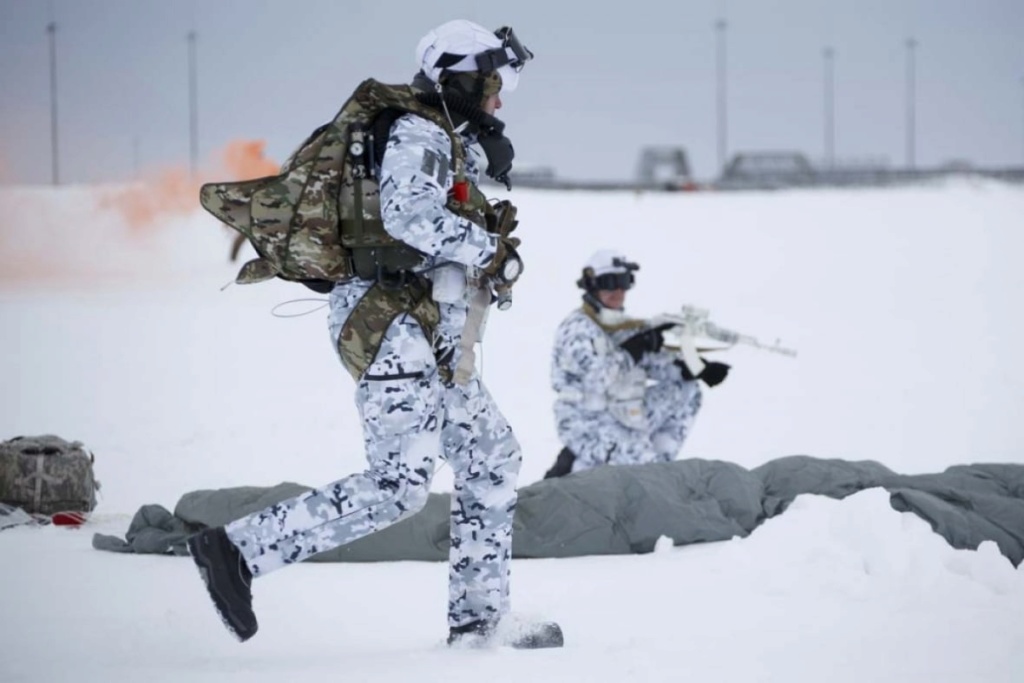 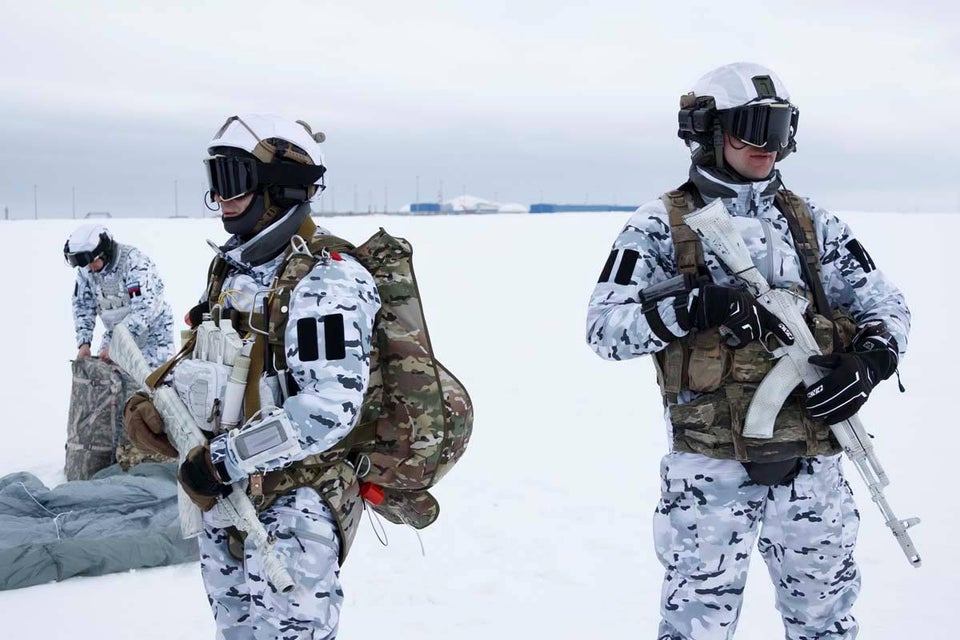