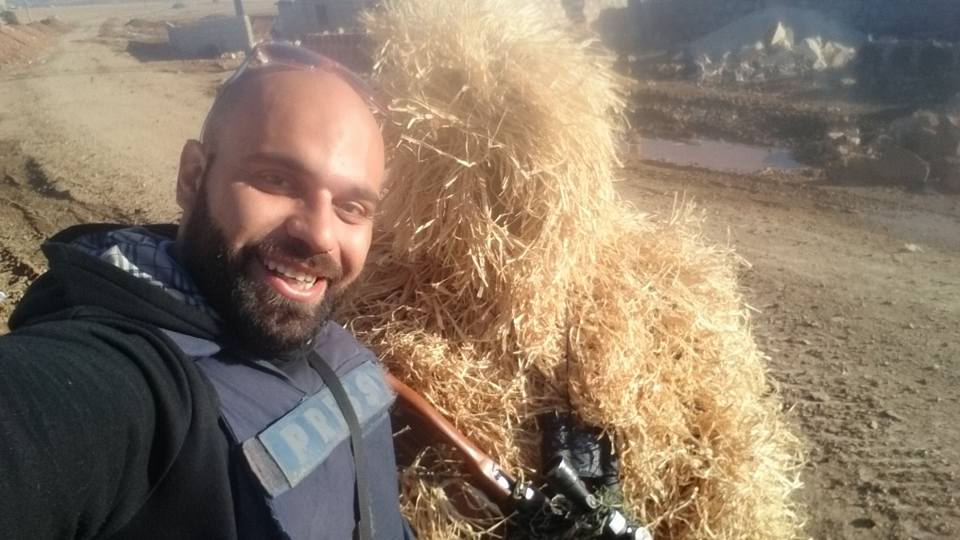 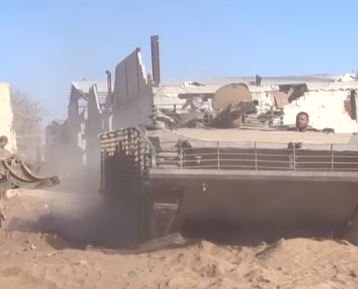 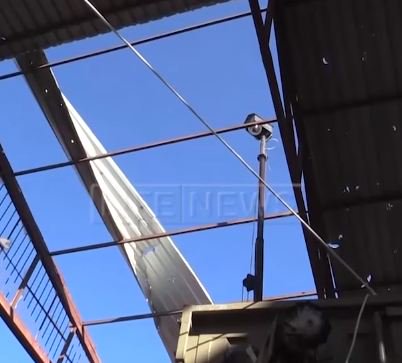 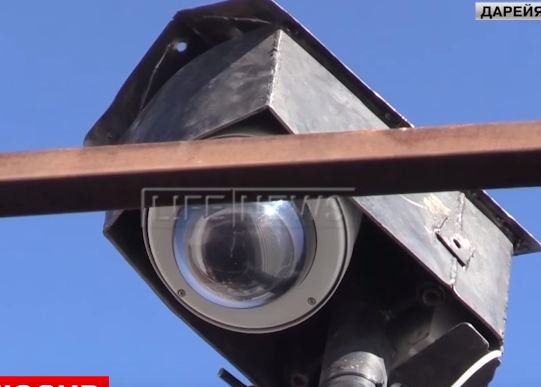 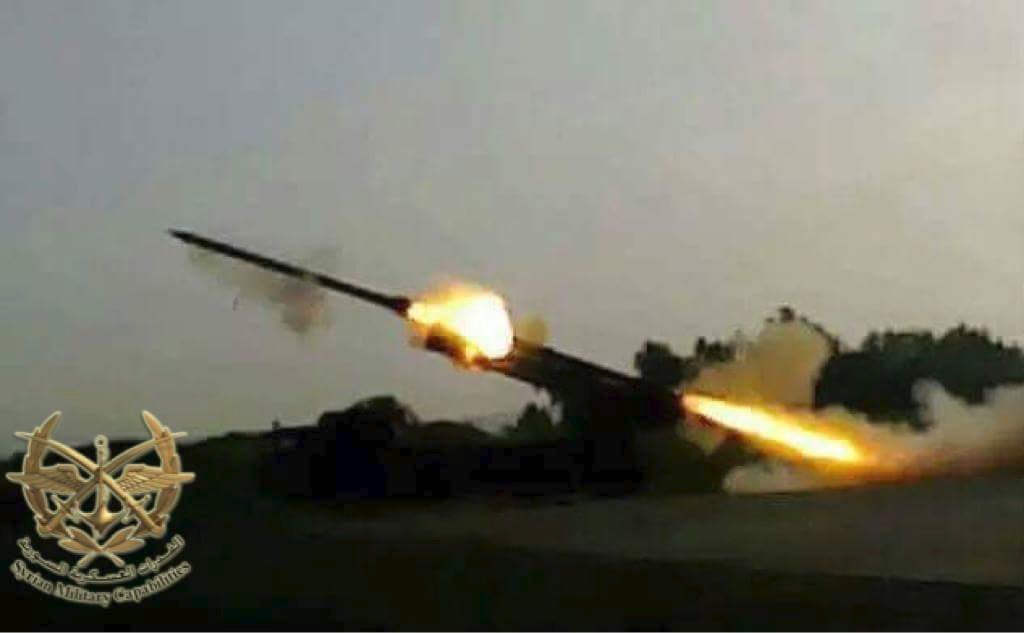 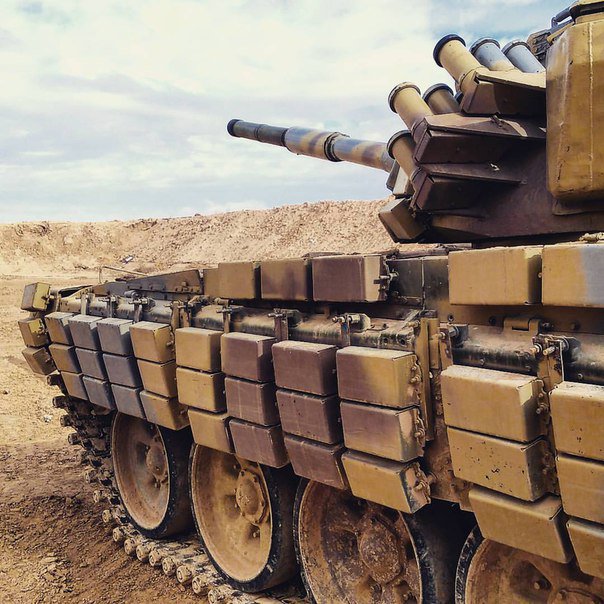 T-72Bs and artillery working around Palmrya, taken by V.Korneev. He says the tankers are nice and heroes. 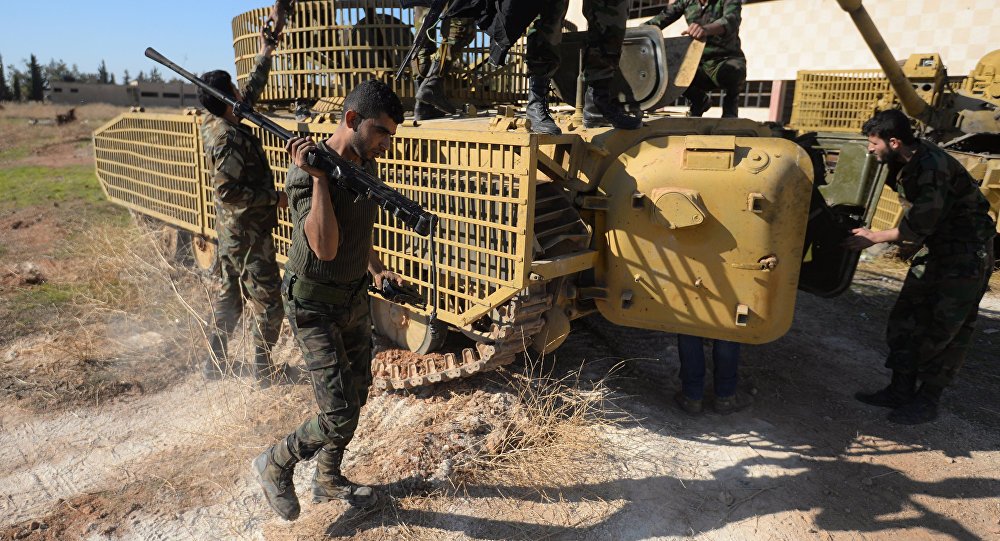 Syrian thread has been very inactive for months now.

Few recent pics of Russian supplied Syrian T-90s which has been very active on the frontline(s) in this fight against international terrorists. T-90s has been on active combat since it was first introduced to the Aleppo theatre last year (2015), just a month or two after the first of the T-90s arrived in Syria. Till date there has been just 3 cases (2 confirmed videos + 1 unknown as terrorists did not upload video of this failed attack) in which the terrorists operated TOWs managed to touch the T-90s physically, rest of the case we can assume the missiles never reached its target, courtesy, most probably, Shtora system.

BM-21 GRAD ‏@bm21_grad
Syrian soldier posing with a Russian military T-90A, location is likely to be Eastern Homs. One shtora is cracked 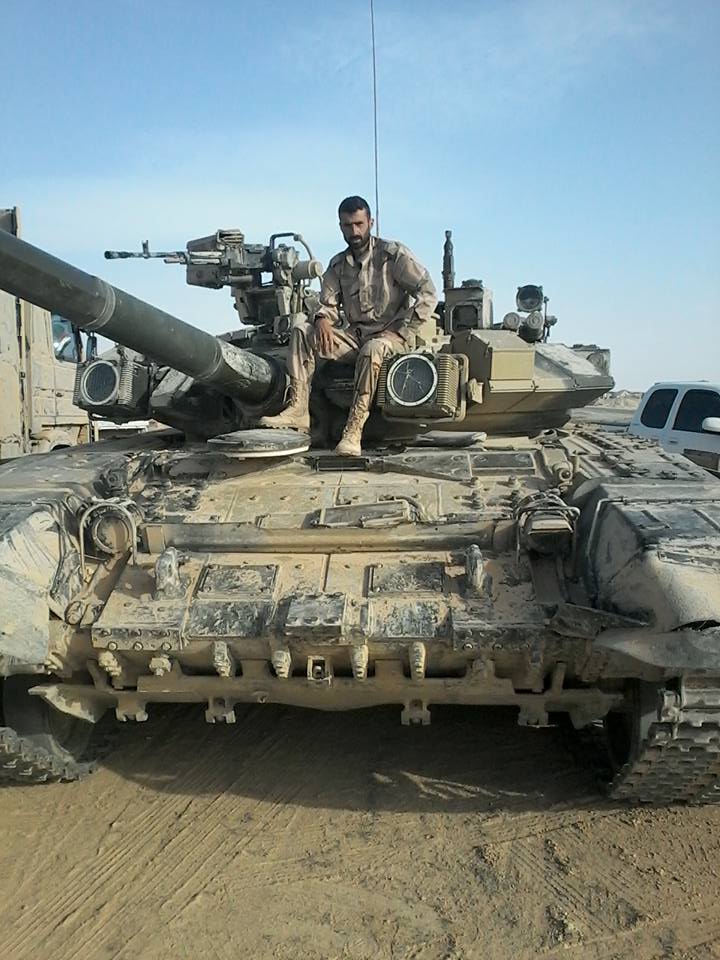 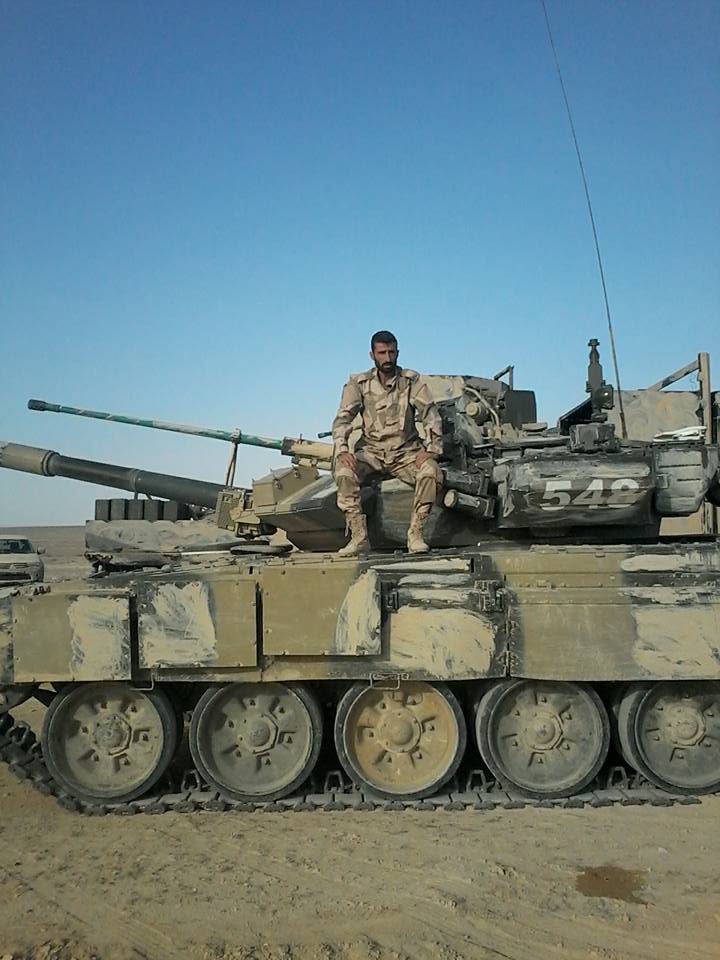 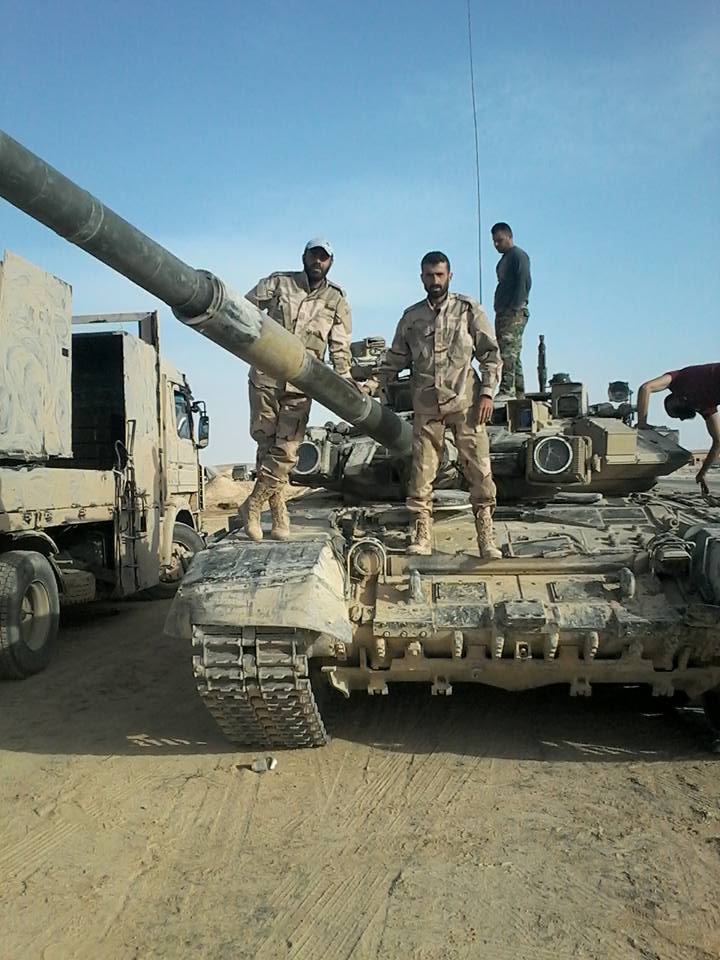 BM-21 GRAD ‏@bm21_grad
The same T-90A, location is indeed near Shaer gas fields, with it's Shtora on turned on tonight. Beauty. 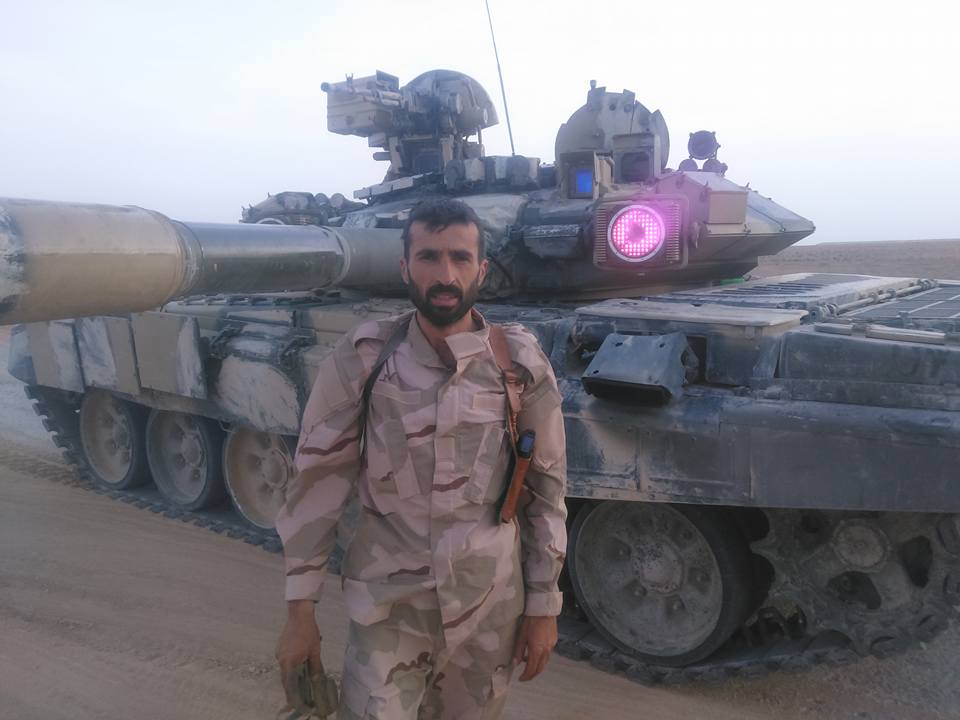 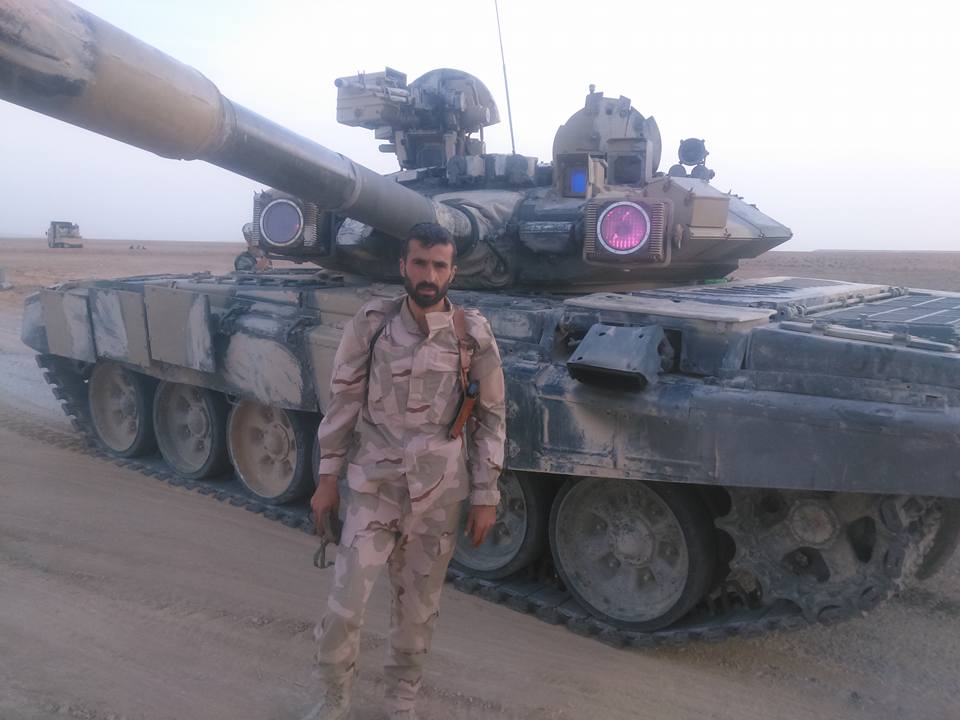 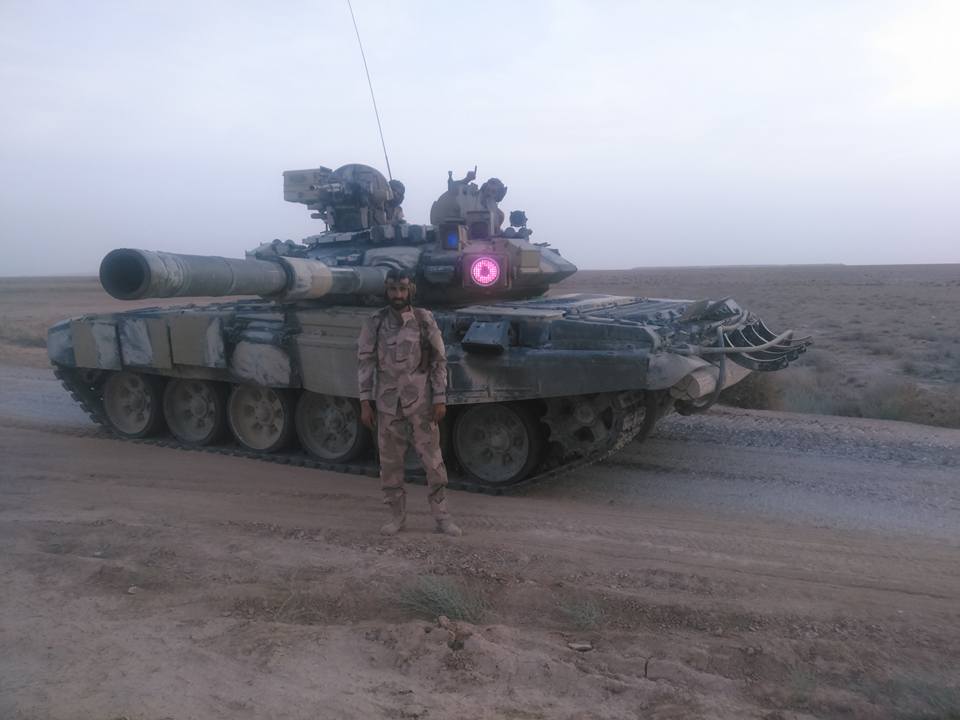 Syrian Republican Gaurds  firefight with the IS in Deir-Ez-Zor, 27 May video

Not directly related to military..
Another excellent coverage by ANNA.... of this little girl who lost her legs in the recent bombing by moderate terrorists on maternity hospital during "ceasefire". Unfortunately, no English translation. Posting translated text of the video description along with it

The crew Anna-News was already told about the tragedy that occurred may 16, 2016 material "Aleppo. Pogrugenie to hell. Part 4".
During the shelling of the Sulaymaniyah district of Aleppo, on the street al-Vilat, 3 people were killed - a pregnant woman Maryam and her son Mahmoud. Sister Maryam, a girl named Cider, lost his leg. The Russian military command the decision was made to transport the injured for treatment to Russia for assistance. The film crew visited the injured girl up to the moment of her departure to the base Hamim from Aleppo June 1, 2016.

After the amputation of the feet of the Syrian girl rescued in Moscow
Published on Jun 2, 2016

Militias are prohibited in Russia, the ISIS are constant attacks on civilians. To Moscow for treatment delivered 11-year-old girl from Aleppo. Under fire in his native city, she lost both legs. In his homeland Sidra, in fact, was doomed. But the chance of recovery gave the Russian military.

I only see the Syrian reporter. 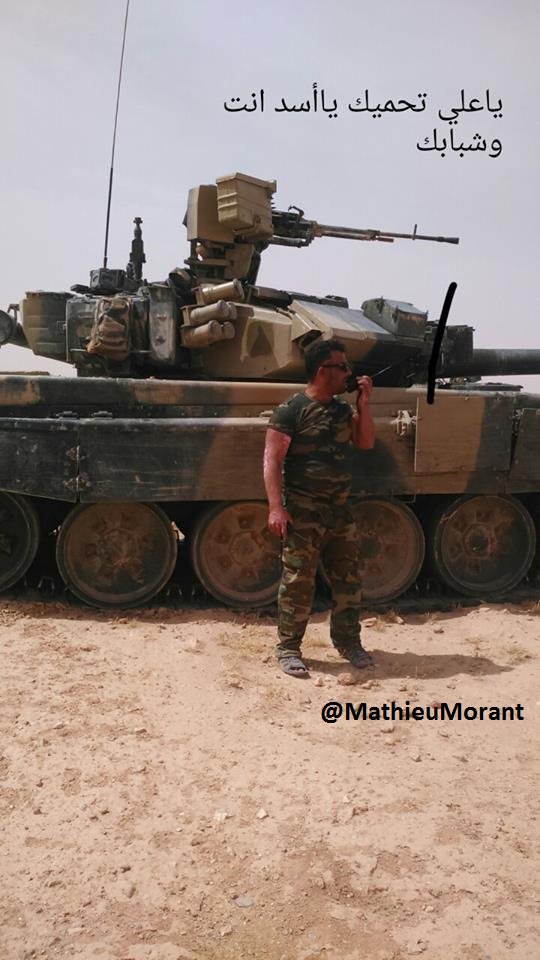 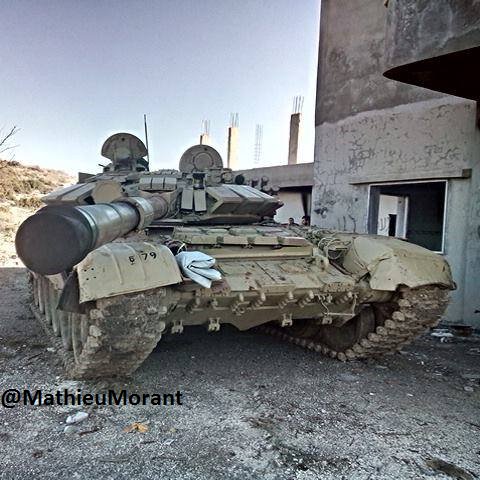 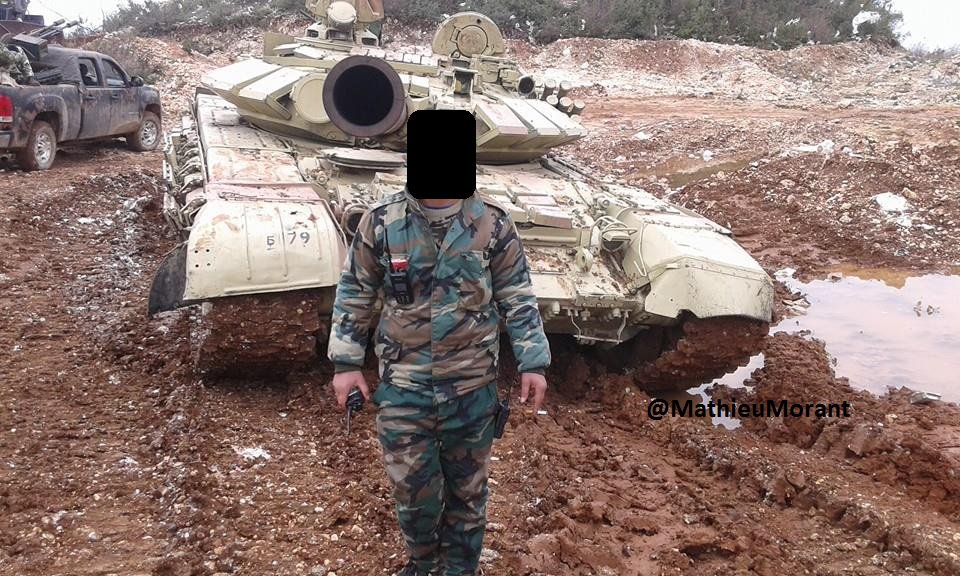 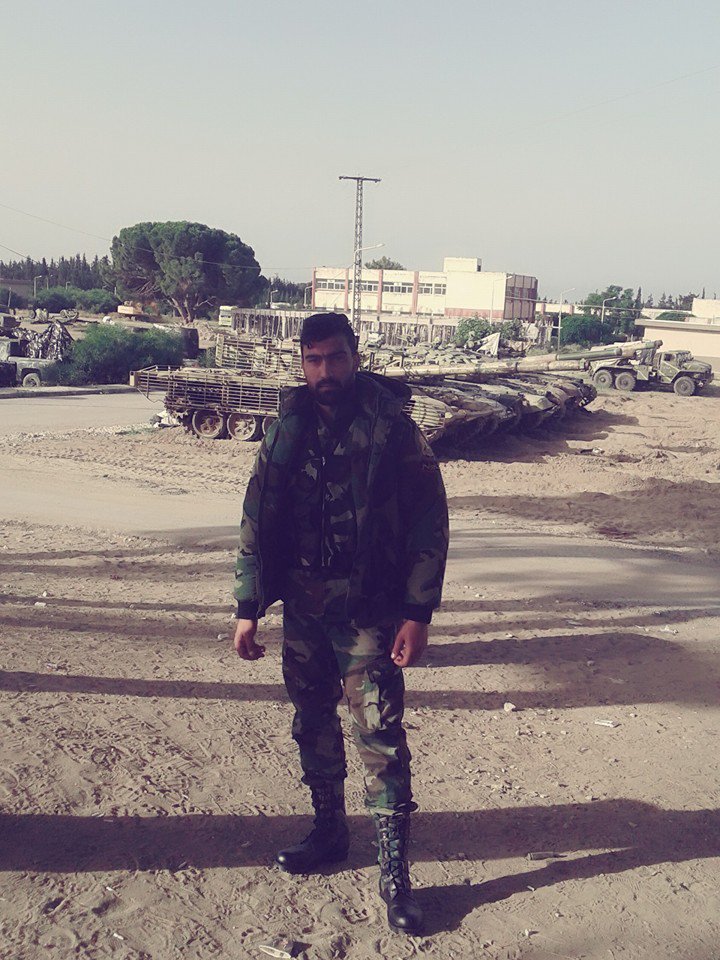 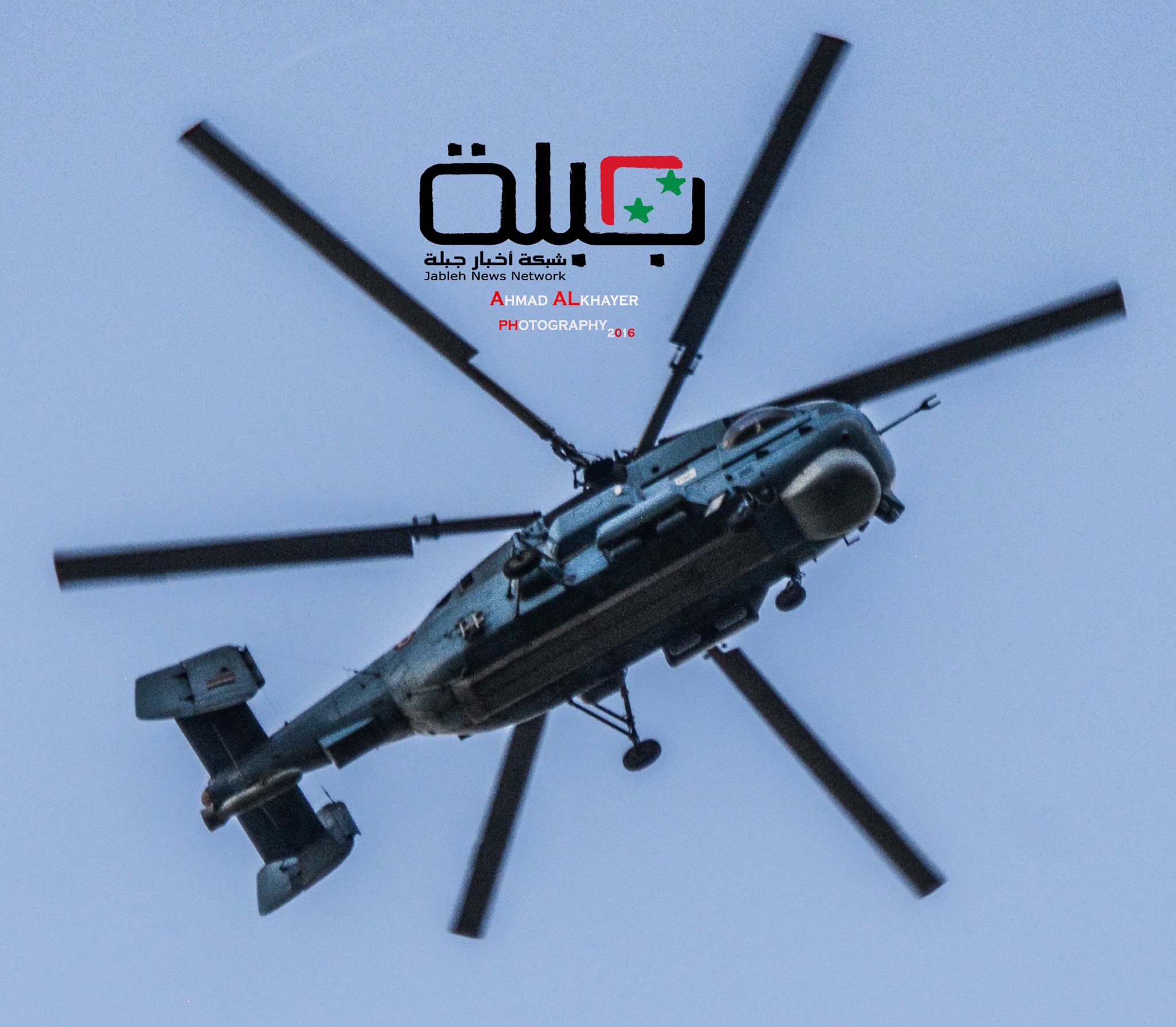 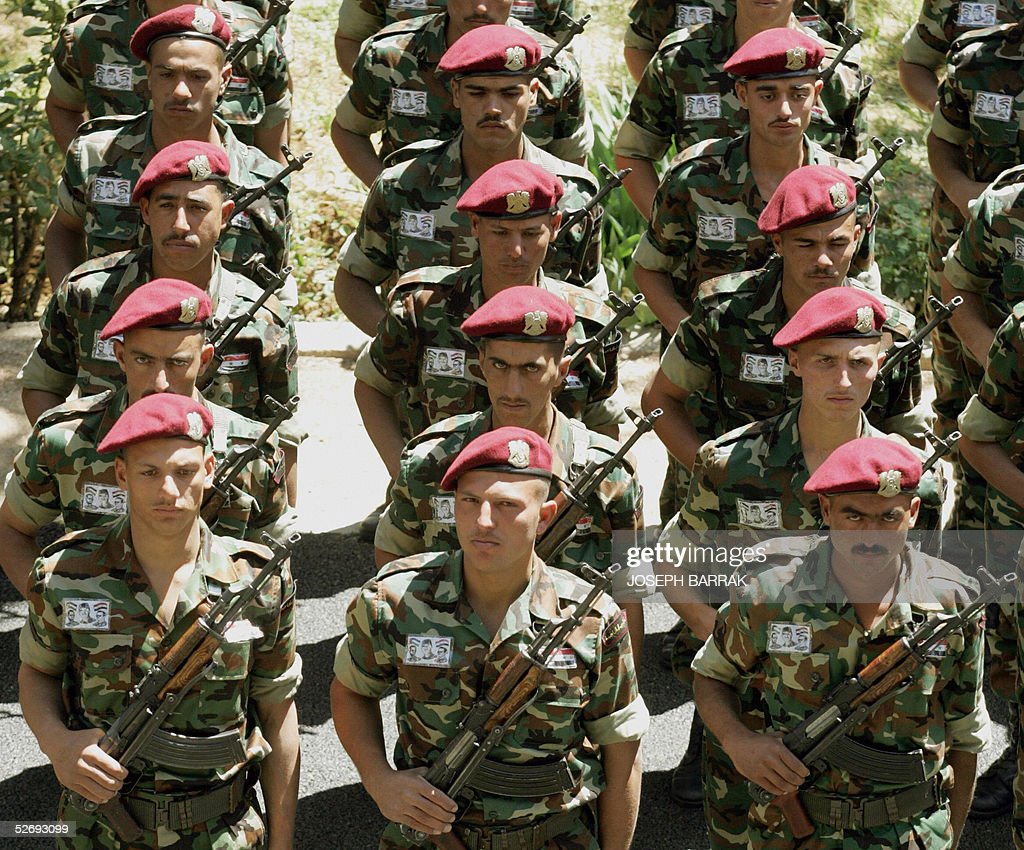 Syrian army special forces prepare for tomorrow's farewell ceremony at the Rayaq Lebanese military airport near the Syrian border 25 April 2005. Syrian troops were packing up and heading out of Lebanon, thus restoring an air of independence to the tiny country which has been in the military and political grip of Damascus for 29 years. 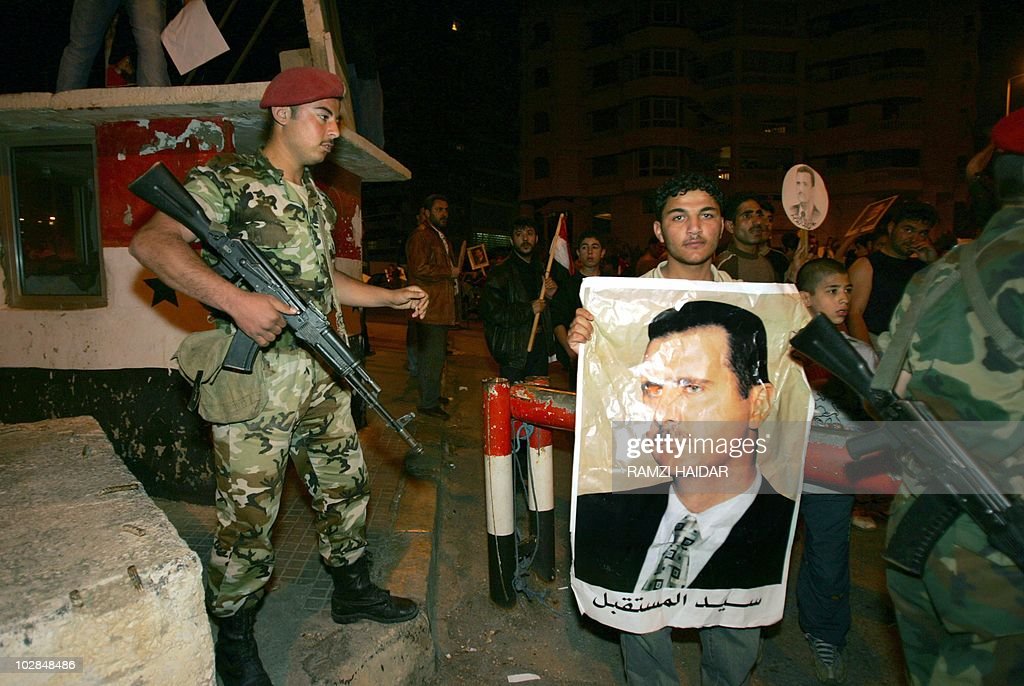 Syrian special forces watch Syrian workers holding up portraits of their president Bashar al-Assad during a protest outside Beirut's Beau Rivage hotel, Syria's 'mukhabarat' intelligence headquarters in the Lebanese captial, against their country's decision to withdraw its forces from Lebanon. Syria was to start redeploying its 14,000 troops in Lebanon after a Damascus meeting between their two presidents tomorrow in the hope of easing stifling international pressure for a full withdrawal. 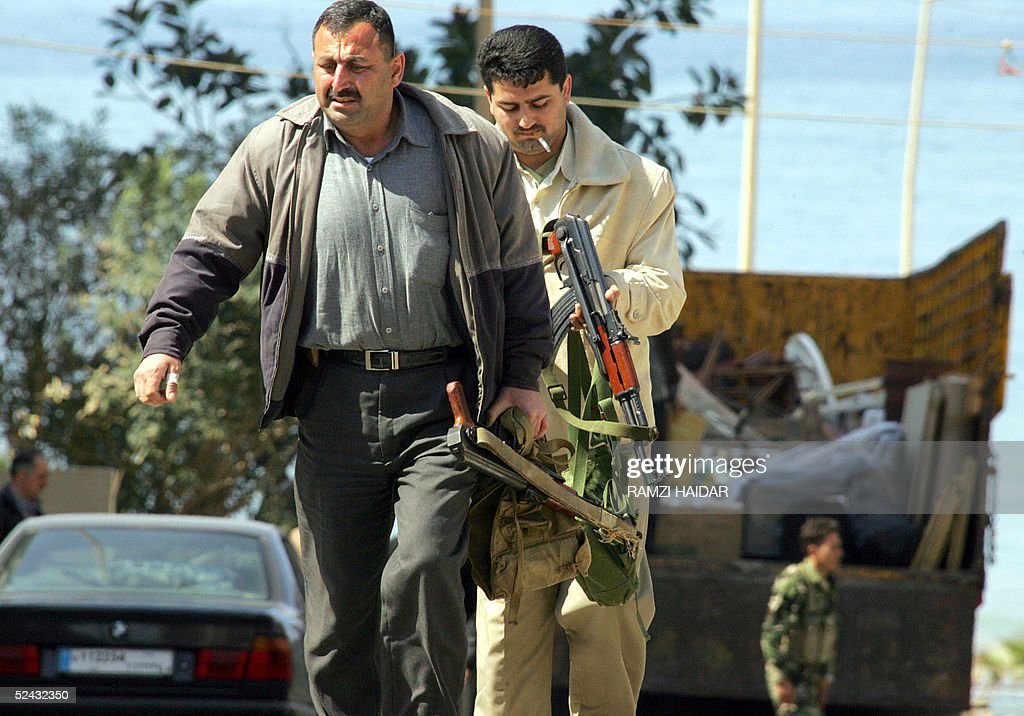 Syrian intelligence officers (Mukhabarat) carry their guns as they prepare to leave the Beau Rivage Hotel, the Syrian inetlligence headquarters in Beirut 16 March 2005. Syria took a further step toward ending its military presence in Lebanon as it began to dismantle its intelligence apparatus here in a move that drew a guarded welcome from the United States. 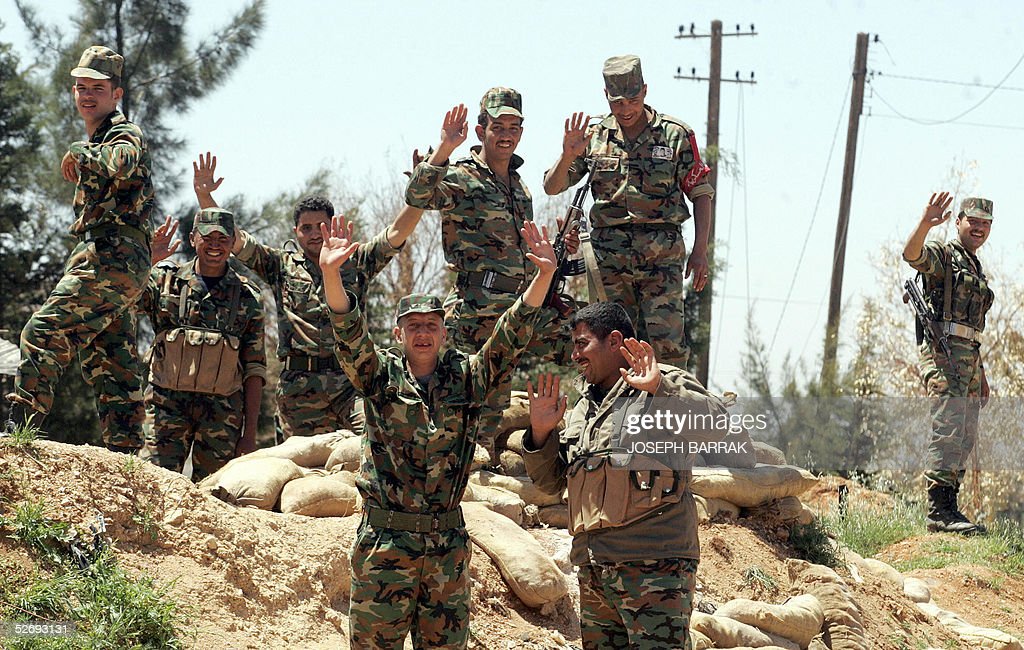 Syrian army special forces wave as they prepare to leave their position in the Lebanese town of Baalbek 25 April 2005. Syrian troops were packing up and heading out of Lebanon, thus restoring an air of independence to the tiny country which has been in the military and political grip of Damascus for 29 years.

Lifting the siege of Deir ez-Zor.