If you all missed it, this year Russia won Ms. Universe and Mr. Universe.  We rock...

Vladimir79 wrote:If you all missed it, this year Russia won Ms. Universe and Mr. Universe. We rock...

Russian females are famous world wide for their beauty. Interesting fact is, that Russian men are not recognized as such while I find them very attractive

I read that the Director of Transformers 3, Michael Bay is in Russia along with Linkin Park and the stars of that movie. Michael Bay's grandfather was from Russia, apparently must have been a Jewish Russian as Michael Bay's Jewish, and that religion is a bloodline.

How much money will be sent out of Russia as everyone goes and watches that movie? Maybe why GM and the US Air Force spent so much time and money supporting those movies?


Russia should have demanded they be part of the WTO before letting that movie play over there. How will Russia make up all that money that will leave country? Poor business model.
GarryB 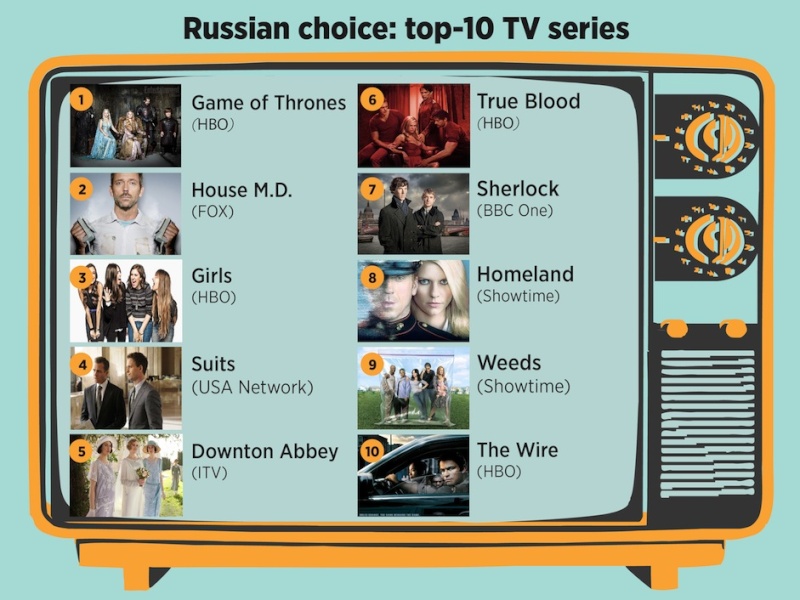 Amedia, has signed a five-year output deal with HBO, giving it exclusive rights to some of the most popular HBO series: Game of Thrones, Newsroom, Girls, True Blood and Boardwalk Empire. Amedia will use the content for its own cable channel Amedia Premium, which will be available in the country’s leading digital TV packages starting on May 31, Alexander Akopov, Amedia General Director, told Vedomosti.
GarryB

Interesting... I don't watch any of those...
Cyberspec

Only Game of thrones....but not on TV

Saw the first 2 seasons of Homeland and found it's off beat theme refreshing .

That said , am more of a Person Of Interest fan .
Regular

Is it less popular than "True blood"??
Still, the best channel in Russia is rutracker torrents )))
Best Russian show I've ever seen was Liquidation (miniseries). Would be interested to some of You, here is description


The year is 1946. World War II is over, but it doesn't mean that there is no one to fight with. The post-war city of Odessa is ruled by serial killer prison-escapees and former Nazi collaborators. Fallen into disfavor, Marshal Zhoukov is sent to Odessa by Joseph Stalin to handle the situation. Together with the head of the local criminal investigation unit, David Gottsman, Zhoukov begins a special operation under the code name "Liquidation

Putin to award State Prizes for 2013

Russian President Vladimir Putin will award on Thursday, the Day of Russia, State Prizes for 2013 in the areas of science and technology, literature and arts, and humanitarian activities, the Kremlin press service said.

The awarding ceremony will be traditionally held at the Big Kremlin Palace, ITAR-TASS reports.

State Prizes for 2013 were conferred on eight outstanding people of science and culture. Thus, prizes in the area of literature and arts were awarded to: Anton Zlatopolsky and Leonid Vereshchagin (film producers) and Nikolai Lebedev (film director) for Legend No 17 film; writer and patriarch of Russian literature Fazil Iskander; and world-acclaimed musician Yuri Bashmet.

Prizes in the area of science and technology were awarded to scientists Anatoly Grigoryev for the development and practical implementation of the system of medical care for space crews during long space flights, and Viktor Maslov, a world-acclaimed mechanical engineer and mathematician, for the contribution to the development of mathematical fundamentals of thermodynamics. “Achievements of these scientists have tremendous significance for the development of science and technologies,” Andrei Furskenko, an aide to the Russian president, said earlier.

The State Prize for humanitarian activities in 2013 was awarded by Yevgeny Primakov, a prominent public figure and diplomat. According to Fursenko, the decision to award the State Prize to Primakov “was practically unanimous.”

The State Prize signifies supreme recognition of the merits of science and culture professionals to society and the state.

A winner receives a monetary reward of five million roubles (145,550 U.S. dollars), a certificate, a badge of honour, as well as a dress coat sign. If success in this or that field of endeavour has been achieved through the efforts of several persons, the State Prize may be awarded to a team consisting of not more than three members. In that case the money reward is shared equally among the team members.

A ceremony marking the presentation of State Prizes is traditionally held in the Kremlin on the Day of Russia, June 12, with President attending.
Read more: http://voiceofrussia.com/news/2014_06_12/Putin-to-award-State-Prizes-for-2013-3635/
Vann7

Interview of the miss universe 2015 celebrating in Miami florida.

It will be interesting to see if miss RUssia and miss Ukraine talk to each other
that will be priceless to see  that.. i can't imagine how ackward will be to ask her
about the war in their country.. she will lose the smile for sure..
Firebird

Vann7 wrote:Interview of the miss universe 2015 celebrating in Miami florida.

It will be interesting to see if miss RUssia and miss Ukraine talk to each other
that will be priceless to see  that.. i can't imagine how ackward will be to ask her
about the war in their country.. she will lose the smile for sure..

Well she was born in Kharkov and speaks Russian. I haven't listened to the vid, but she could be substantially MORE pro Russian than Miss Russia. I mean I have family from Kiev (and some of the W areas of the Ukr, further back) but I'd want the Ukr and Ru reunified, and the Lvov Fascists bombed into oblibvion.

Altho is the surname Western/Central Ukrainian?

Anyway, I think that East Slavic women are the hottest in the World.
George1

'Masha and the Bear' wins a 'children’s Oscar'

The popular Russian animated series took the prize for Best Animation at the Kidscreen Awards.

The Russian animated series “Masha and the Bear” has won the award for Best Animation in the Creative Talent category at the prestigious Kidscreen Awards 2015, which took place last month in Miami.

"This is practically the first recognition that a Russian animation series has ever received on an international, professional level. This award, which in a way is an analog to the children's Oscar for the TV industry, says that Russian animation has entered a completely new level," said series producer Dmitri Loveiko.

Last year, Svetlana Razgulyaeva's “Why the Banana Snarls” took part in one of the competition programs of the Berlin Film Festival; Dina Velikovskaya's “My Strange Grandfather” received the award for Best Animation Film at the Amarcort Short Movie Festival in Rimini, Italy; and Constantine Bronzit's “We Can’t Live Withouth Space” was the best short film at the Cinanima's International Program in Espinho in Portugal. Olesya Schukina's “The Elephant and the Bicycle” took eight prizes at festivals all over the world in 2014, participating in competitions from the UK to China.

Distribution and screening rights to “Masha and the Bear” were sold to Turner Broadcasting (Cartoon Network), France Television, KIKA, Sony Music and NBC Universal. On YouTube, the series’ channel was ranked 20th in the list of the most popular YouTube channels of 2014. Episodes of “Masha and the Bear” have been viewed on YouTube more than 2.5 billion times. Two other Russian cartoons appear in the list of the top 100 YouTube channels of 2014: “Luntik,” in 59th place and “Barboskiny,” in 69th place.

One of Russian ballet’s most iconic dancers, Maya Plisetskaya, has died of a heart attack in Germany at the age of 89.

“Her husband, [the composer] Rodion Shchedrin has just called me. She died from a massive heart attack – the German doctors did their best, but she could not be saved,” Bolshoi Theater general director Vladimir Ourin told TASS news agency.

VIENNA, May 20. /TASS/. Singer Polina Gagarina, who represents Russia at this year’s Eurovision Song Contest in Vienna, Austria, will perform in the second part of the final due on Saturday.

She participated in a toss-up during a press conference attended by all the ten participants who qualified on Tuesday for the final. The final number at which the participants will perform is due to be determined after the second semifinal on Thursday.

Gagarina confessed that she burst into tears when learning that she had passed to the final. "I am absolutely happy," she said, adding that this feels like giving birth again and seeing her son for the first time.

The singer said she was glad to hear how the whole audience sang the song during her performance and shouted her name. "Thank you for your hearty welcome," she added.

Gagarina, 28, is a winner of the Star Factory, a popular Russian music TV project. Russia has taken part in the Eurovision since 1994 and won the song contest in 2008 with pop star Dima Bilan performing the song "Believe".

Besides Russia, the other semifinal winners are Estonia, Greece, Hungary, Romania, Georgia, Serbia, Armenia, Albania and Belgium. Another ten performers aspiring to win the contest will be announced in the second semifinal on May 21.

In the May 23 final, the participants will be joined by the representatives of the big European "five" - Germany, the United Kingdom, France, Spain and Italy - as well as the host country and the special guest of the contest on occasion of its 60th anniversary, Australia.
whir

Let me predict something, there will be again some bearded women or cocked women along with 10+ propaganda members singing something about "Enemy trying to overrun us but we are so brave to withstand the red hordes"...Russia should dump this bullshit Eurovision, russia is not in EU and should not attend at such indoctrinated propaganda tools like Eurovision is it just pathetic.
Neutrality

I fully expect Eurovision to be, as usual, a political tool. Beautiful song regardless. Bookmakers are predicting a 2nd place.
whir

Werewolf wrote:Let me predict something, there will be again some bearded women or cocked women along with 10+ propaganda members singing something about "Enemy trying to overrun us but we are so brave to withstand the red hordes"...Russia should dump this bullshit Eurovision, russia is not in EU and should not attend at such indoctrinated propaganda tools like Eurovision is it just pathetic.

What's pathetic is not seen that Eurovision is serious business and a very profitable one for everyone.

I heard lots of booing at the end of her song. The people booing her are retarded freaks.
whir

kvs wrote:I heard lots of booing at the end of her song.  The people booing her are retarded freaks.

(although this year's venue is quite smallish so maybe it's just a side effect). Booing a good entry is quite stupid since it has being proven time and again that trying to ruining the show for this or that country has no effect among people at home.

The running order for the final was announced yesterday after the second semifinal by Austrian broadcaster ORF and EBU.

So let the accusations of rigging begin...
Sponsored content