The northern district also got a few, special troops for the arctic + some air assault units.
franco

They would be included in the Naval Infantry & Coastal Troops being subordinate to the Navy Command.
franco 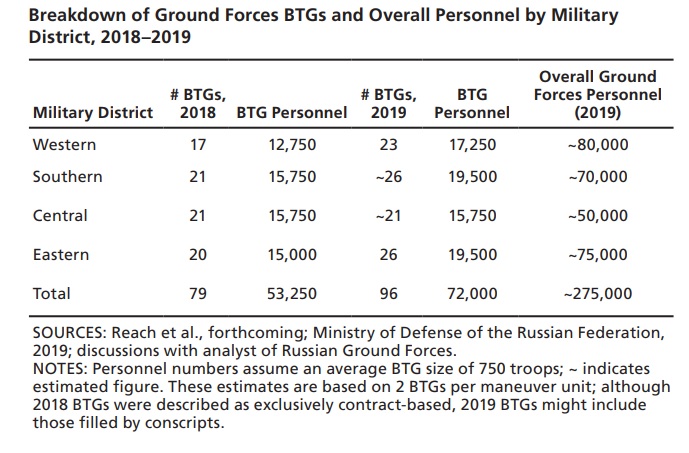 172 page report from the Rand Institute on a study by Americans trying to understand how the Russian Military thinks...

franco wrote:172 page report from the Rand Institute on a study by Americans trying to understand how the Russian Military thinks...

True while having difficulties comprehending even only numbers

My take on the present military personnel totals in the Russian Ministry of Defense:

– officers and warrants. In 2016 Deputy Defense Minister Pankov stated that when they talked about military staffing level ( ie, 95%), they were referring to the cadre of officers and warrants not the overall total. (218,000)
– contract servicemen (405,000)
– conscripts (228,000)
– military school cadets (62,000 – 1,300 foreign = 60,700)
- University students taking military training at Civilian Higher Education establishments Military Departments (96 – ROTC similar). Of the last posted total of 61,200 (2018-2019), 10,500 were studying to become Regular Officers while the rest become Reserve Officers, Warrants or Sergeants upon graduation (provided there is not a shortage and Regular service is required). Apparently this training period and reserve service counts against or in lieu of national service (conscription). Not sure how this group counts against the authorized military totals.

The above totals would give an active operational force of ~850,000 and a potential overall total of 910-970,000. A year ago, the Head of Mobilization and Organization had stated the active total was just over 830,000. When you factor in another planned 70,000 contractors and 10,000 or so Officers then you would be over the planned authorized strength of 1,013,628.
Sponsored content