Ship "Akademik Ageev" transferred for completion at the Kanonersky shipyard

Reportedly, on August 31 and September 1, 2019, the first-class oceanographic research vessel (special purpose), Academician Ageev (serial number 451), project 16450 (code "Garage-Guys"), being built for the Main Directorate for Deep-Water Research (GUGI) The Ministry of Defense of the Russian Federation, was transferred along the Neva from the Pella Leningrad Shipyard OJSC (Otradnoye, Leningrad Region) for completion at the Kanonersky Shipbuilding Plant CJSC (Kanonersky Island, St. Petersburg). 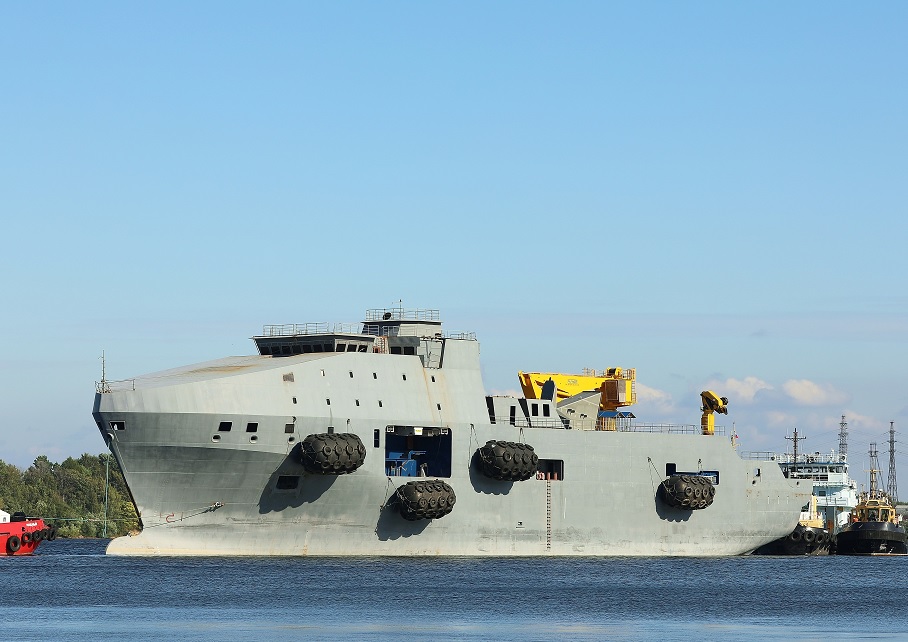 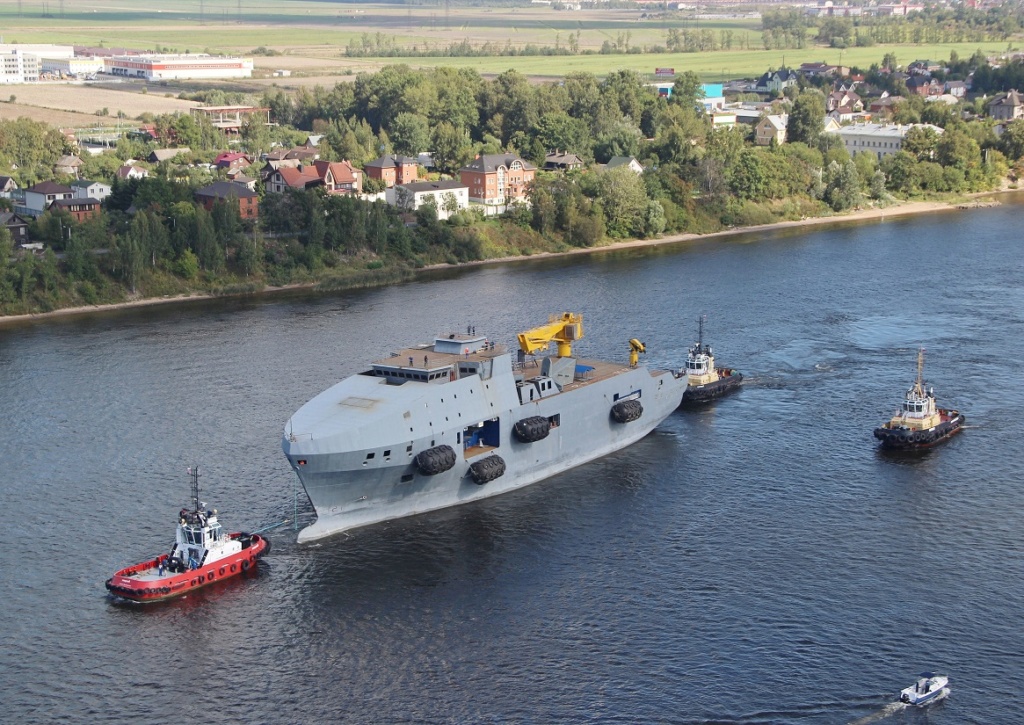 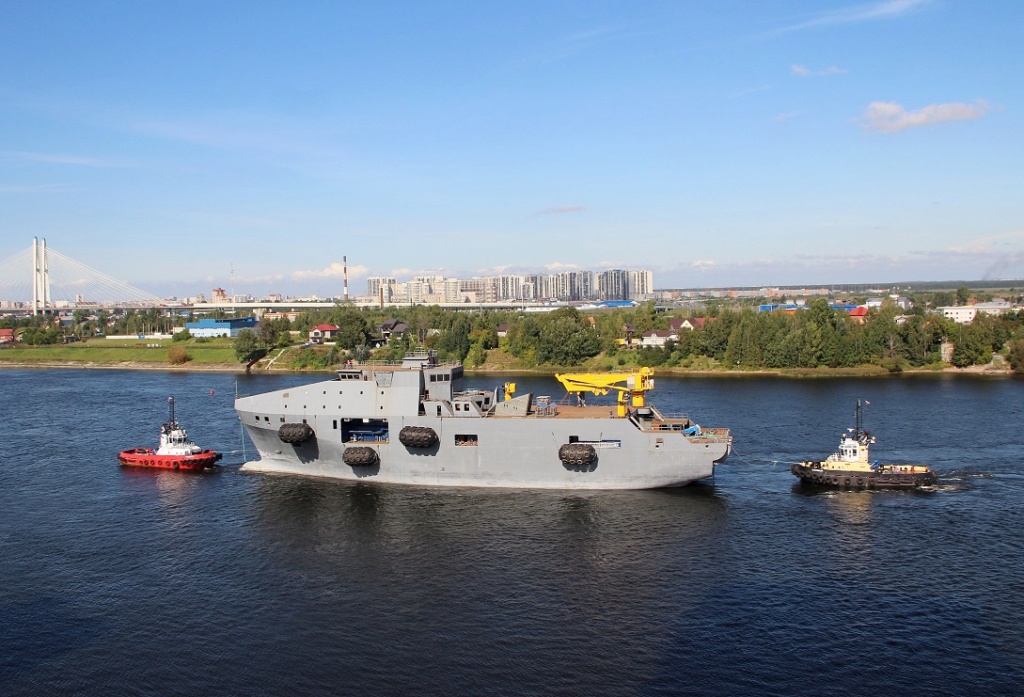 What an odd looking vessel...

Looks pretty decent to me:

Freeboard is very high, exaggerated by the covered bow.
Its a cable-layer, apparently related to the new hydrophone cable network.
Big_Gazza

Not really, pretty standard for an offshore services vessel. 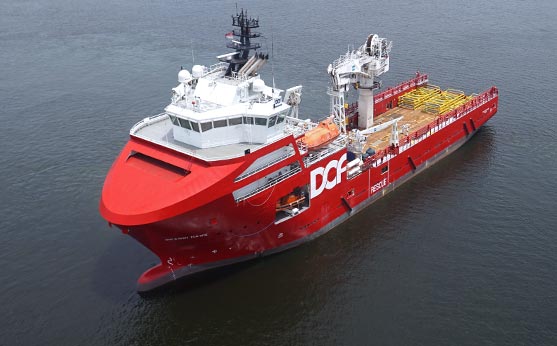 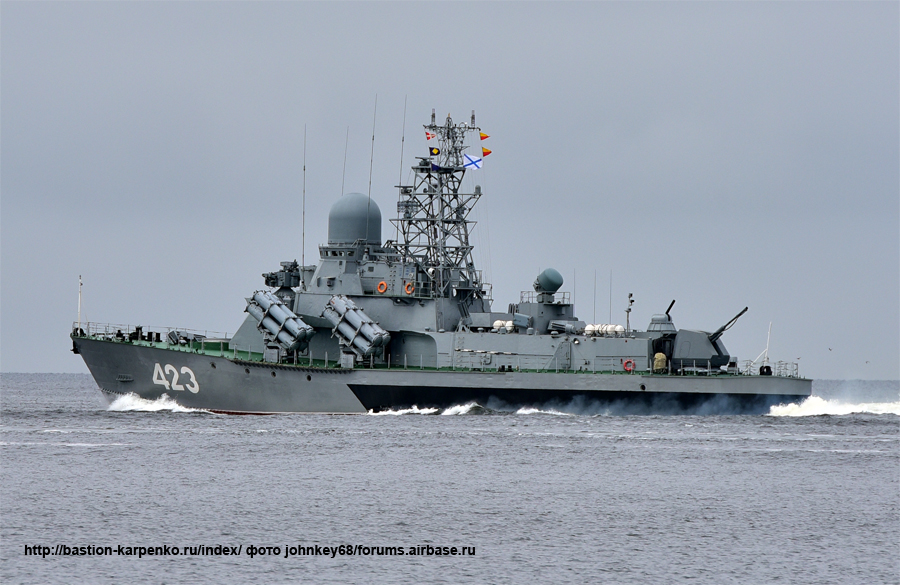 Looks like a 57mm gun to me... interesting they are using both 30mm gatling and 57mm... hints that perhaps they will see them as complimentary and use them together rather than replace the 30mm with 57mm.

Sound like a sensible thing to me... the 57mm would certainly pack range and punch, but 30mm rounds are cheaper and easier to carry in large numbers... and many targets don't need a bigger round.
Isos

The former gun probably didn't had a good CIWS caracteristic so they put the ak630. I'm surprised by the size of the gun, the ground version is much smaller. Are the munitions inside of the turret or under the bridge like in bigger guns ?

We may see that gun ending on Gorshkovs as a secondary CIWS if it works well.
marat

That would explain its size... though in fairness, while being a very big 57mm gun turret it is actually a rather good sized 76.2mm turret.

I would assume all the clever new rounds for the 57mm gun will be adapted to larger calibre shells like they did with their guided artillery rounds for land based guns. 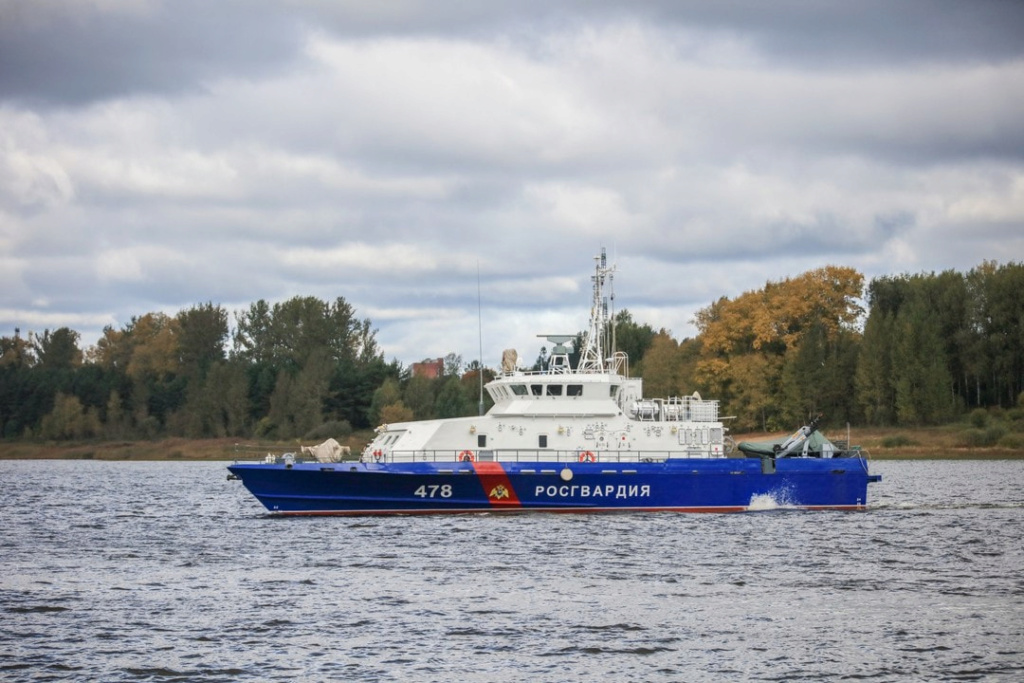 To date, 22 anti-sabotage boats of Project 21980 have already been ordered for the Russian Navy, of which 19 boats were commissioned since 2010 (ten were built at Zelenodolsk Plant named after A. Gorky in Zelenodolsk, four at Shipbuilding Vympel plant in Rybinsk, and five at Vostochnaya Verf OJSC in Vladivostok). Of these 19 boats, six are part of the Black Sea Fleet, five each are part of the Northern and Pacific Fleets, two are part of the Caspian Flotilla and one is part of the Baltic Fleet.

The official launch of the Akademik Ageev oceanographic research vessel

Reportedly, on November 21, 2019, at the Kanonersky Shipbuilding Plant CJSC (Kanonersky Island, St. Petersburg), an official ceremony was launched to launch water from the floating dock of the first-class oceanographic research vessel (special purpose) Akademik Ageev (serial number 451) of project 16450 (code “Garage-Guys”), under construction for the Main Directorate for Deep-Water Research (GUGI) of the Ministry of Defense of the Russian Federation. 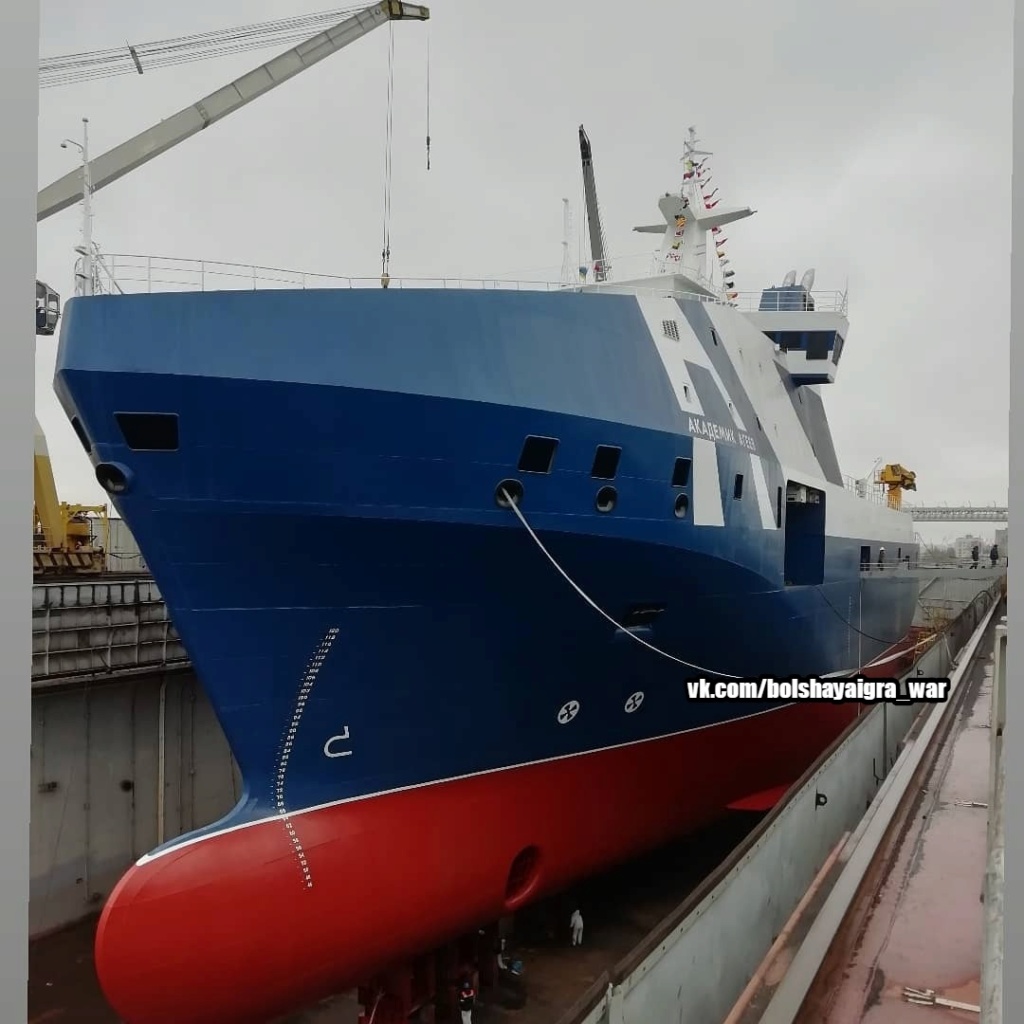 
As a source in the shipbuilding industry told Sudostroenie.info, the event was held in working order with the participation of representatives of the Main Department of Deep-Water Research of the Ministry of Defense of Russia, representatives of the Pella plant, design organizations - the Malachite and Northern Design Bureau, as well as the workers of the Kanonersky factory.

On the bmpd side, we recall that the construction of the Akademik Ageev research vessel was carried out for the State Research Institute of Civil Engineering at the Pella Leningrad Shipyard OJSC (Otradnoye, Leningrad Region) since 2015. The official laying ceremony of the Akademika Ageev was performed at the new shipbuilding complex of the shipyard Pella "September 15, 2016. The lead developer of project 16450 is Severnoye PKB JSC (information on design and development work on this vessel was contained in the bureau's annual report for 2015).
The technical launch of the Akademik Ageev vessel at the Pella plant was carried out without wide publicity on December 21, 2017. Apparently, in 2018-2019, work on the ship on the "Pella" was practically not carried out. On August 31 and September 1, 2019, the Akademik Ageev vessel was transferred along the Neva from Pella Leningrad Shipyard OJSC for completion at Kanonersky Shipbuilding Plant CJSC (Kanonersky Island, St. Petersburg).

According to one source, the transfer of the vessel for completion to the Kanonersky shipyard is due to the absence of a dock of the appropriate size on Pella necessary for docking during the completion process. Now, "Academician Ageev", after docking, was officially launched at the Kanonersky Plant. The deadline for the ship, however, remains unknown. 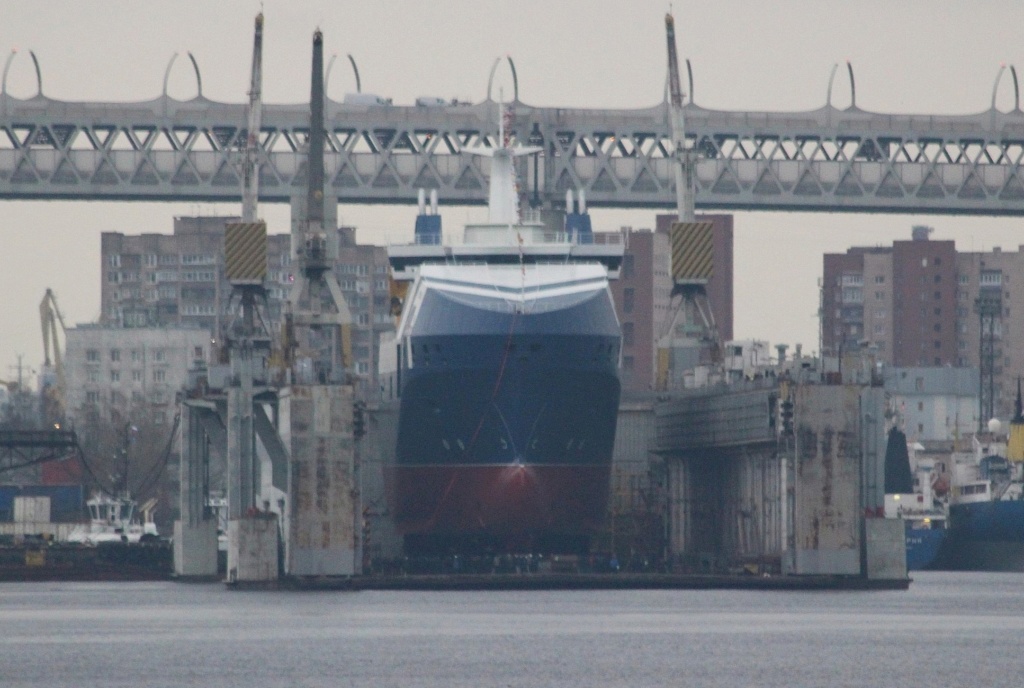 Akademik Alexandrov with a "maket" of Poseidon. 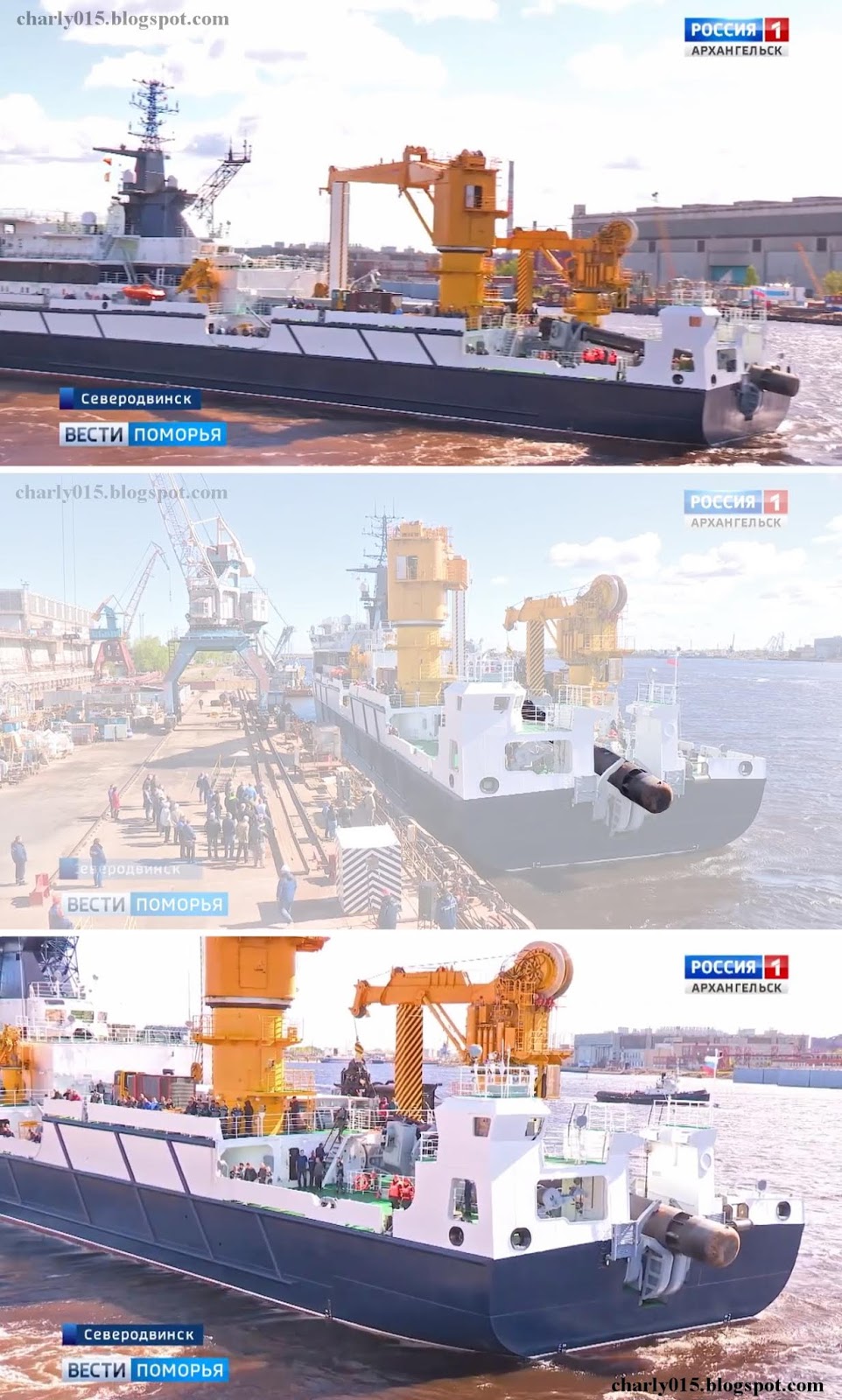 What is it going to do with a poseidon ?
PapaDragon

Isos wrote:What is it going to do with a poseidon ?

Retrieval during test firing and exercises

Also there is possibility of installing seabed based version

Poseidon is not fired, it is launched.

Could also be used to launch real ones in wartime.
Big_Gazza

I'd suggest that this is a mass simulator for testing the deployment of Poseidon on surface vessels.  Apart from use as a counterforce strategic deterrent, it could serve as a super-heavy smart torpedo for attacking surface forces, and carried on specialist surface combatants or even requisitioned civvie transports when packaged in a containerised form.

How big would a surface combatant need to be to carry a pair of Poseidon? Lets say a 2000-2500T corvette?

Thinking bigger, a few carrier-killer destroyers able to strike a Seppostani CVN from several thousand kms would be a nice addition to any future Russian naval groups tasked with power projection in global hotspots.  It would certainly complicate the threat assessment for the USN.

Its plausible that this particular setup could be for test unit retrieval, but I expect they would recover a spent round in a vertical lift, either nose or tail first.  Recovering over a stern roller would result in localised bending stresses and would risk both surface and structural damage.

This would more likely be an improvised launch arrangement for a commandeered civvie, ie for use in times of crisis

It is supposed to operate a 1km deep or more so I rather suspect its structural strength is pretty solid... It may not have any air filled internal compartments at all... it could be designed to allow internal compartments to fill up with water at great depths so there is no problem with de-pressurisation or pressure differential between sections.

Strong structure would make it a very difficult target to deal with too... generally a torpedo destroys a sub simply by the uncontrolled letting water in and air out and anyone who as popped a balloon knows even with a thick skin once they are pierced the pressure differential does the rest... but what if there is no pressure differential... an outer wall of a submarine is strong to prevent water coming in but because water does not compress the hull of a sub is supported by the water behind it but the reverse is not true from the outside a pressure wave moving through water hits the outer hull with only air behind it to support it and of course it will collapse fairly easily.

The double hulled submarines with outer hulls with water behind them are much better at reducing the effect of torpedo explosions... to the point where modern torpedos are designed to explode underneath subs and ships creating an enormous gas bubble that rises up and tries to lift a narrow section of the ship out of the water or the sub in the water... in both cases generally breaking the back of the structure and smashing it into at least two pieces...

For a water filled unmanned torpedo type weapon things might not be so simple...
marat

Any info about this landing units that BSF received this year?
ult

Any info about this landing units that BSF received this year?

He is probably talking about the Project 02510 BK-16 or Project 02511 BK-18. I don't think that people on the internet were able to identify each and every one of them that was delivered yet. 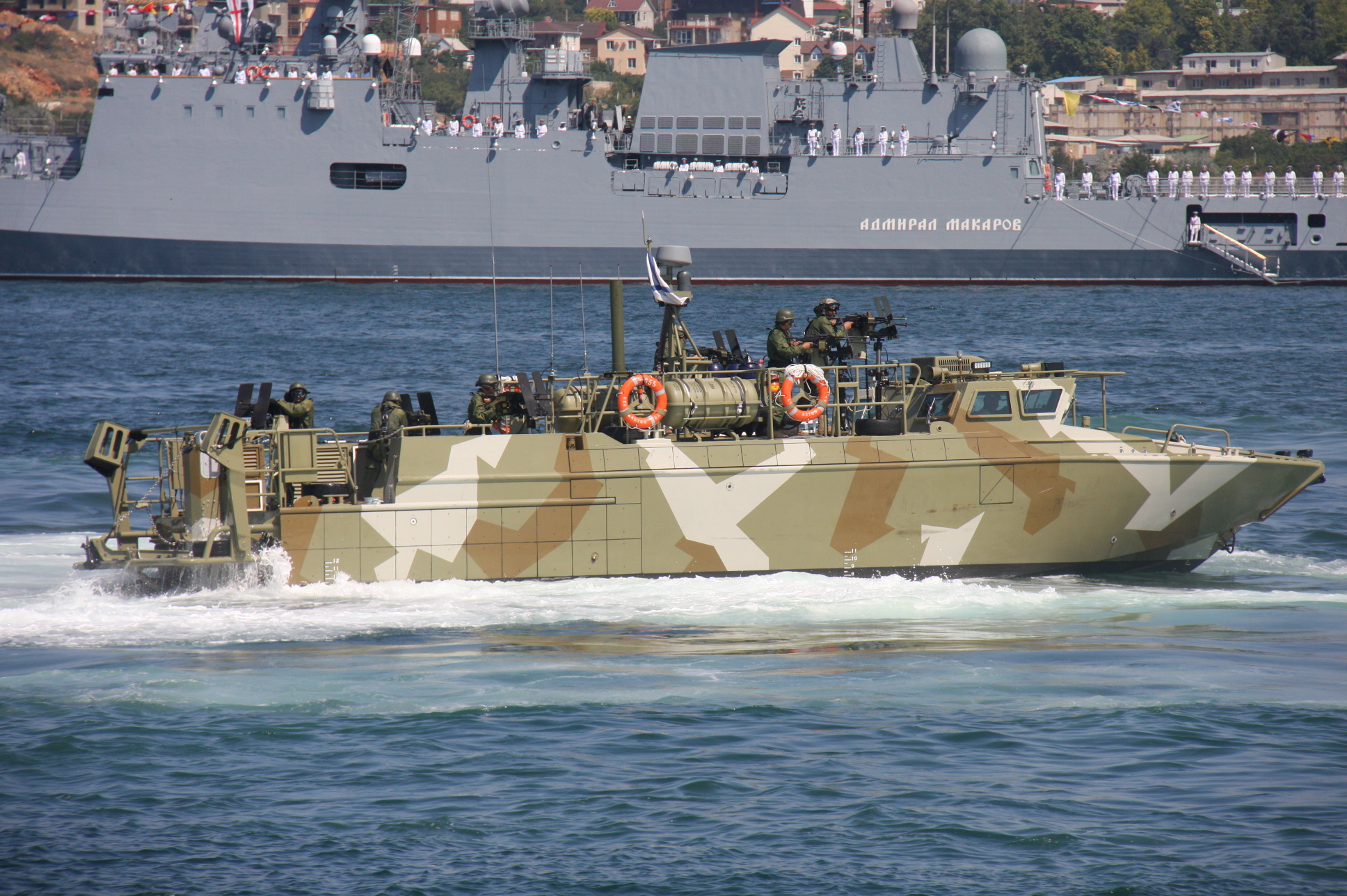 Yes I forgot them. I hoped that maybe they got some Dyugon or Serna. Generally any info about those two class? Their numbers are very low and they should be very useful and cheap.
franco

marat wrote:Yes I forgot them.  I hoped that maybe they got some Dyugon or Serna. Generally any info about those two class? Their numbers are very low and they should be very useful and cheap.

There was talk of building another 6 Dyugon but production of both appear to be over for the time being. Maybe once the other projects slow down.
flamming_python 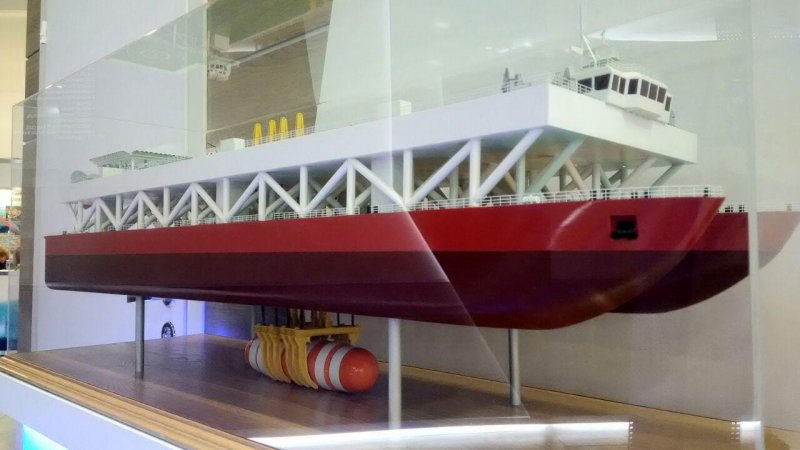 The vessel will lift different objects from the seabed, including ships, submarines, and other equipment posing threat to marine environment. It can also be used for development of offshore oil and gas resources (transportation and underwater engineering operations, e.g. assembly, inspection and maintenance of submersible pipelines).

According to designers, Project 23570 involves a whole range of innovative ship-salvage solutions; several R&D works are currently carried out in this area. One of them named Tekhnologia-ATP is aimed at "development of basic project of integrated technology and equipment for searching, identification, lifting and delivery for further disposal of potentially hazardous underwater objects". The ship will interface with the marine infrastructure available on the Kola Peninsula.

A naval insider said the ship-salvage issues remained topical and needed some purpose-built technical solutions. For one, within the next few years it is planned to lift PD-50 floating dock and a number of sunken submarines. Also, the Project 23570 vessel will plant and remove different underwater assets on the seabed, and attend the Russian Navy’s search and rescue operations.

It is planned to kick off building the ship in 2020’s. There will be a single vessel in the project, with the homebase on the Kola Peninsula. Ice class of the future catamaran-type ship is Arc4. Its length is 137 meters, beam is 36 meters, draft is 7.5 meters. Deadweight at design waterline is 10,000 tons. The joint-action lifting system can lift a 14,000-ton object. It is based on 56 lifting gears with capacity of 250 tons each. The load-gripping device consists of 14 modules lifting 1,000 tons each.

Don't they already have an ancient ship that does a similar job... it was made in 1918 or something and is the oldest operational ship in the Russian Navy... but it does a good job so they keep using it. Found it... Kommuna...

This will be interesting and certainly clearing a lot of crap off the sea floor and also placing certain items around the place would be useful too.
flamming_python

Don't they already have an ancient ship that does a similar job... it was made in 1918 or something and is the oldest operational ship in the Russian Navy... but it does a good job so they keep using it.  Found it... Kommuna...

This will be interesting and certainly clearing a lot of crap off the sea floor and also placing certain items around the place would be useful too.

It was actually launched in 1915 and started its service life in the Tsarist fleet - was called the Volkhov back then.

So it served through both world wars, 3 completely different political orders, and over 100 years

A real veteran to be sure, I think it's the oldest ship still in active service in the world

Perhaps the Russian Navy is thinking of retiring it at last. Or maybe it just needs something a little more modern to augment it.
Sponsored content