Why waste the helipad? Look at the foreship.

Hole wrote:Why waste the helipad? Look at the foreship.

The helipad allows a 360° radar coverage. 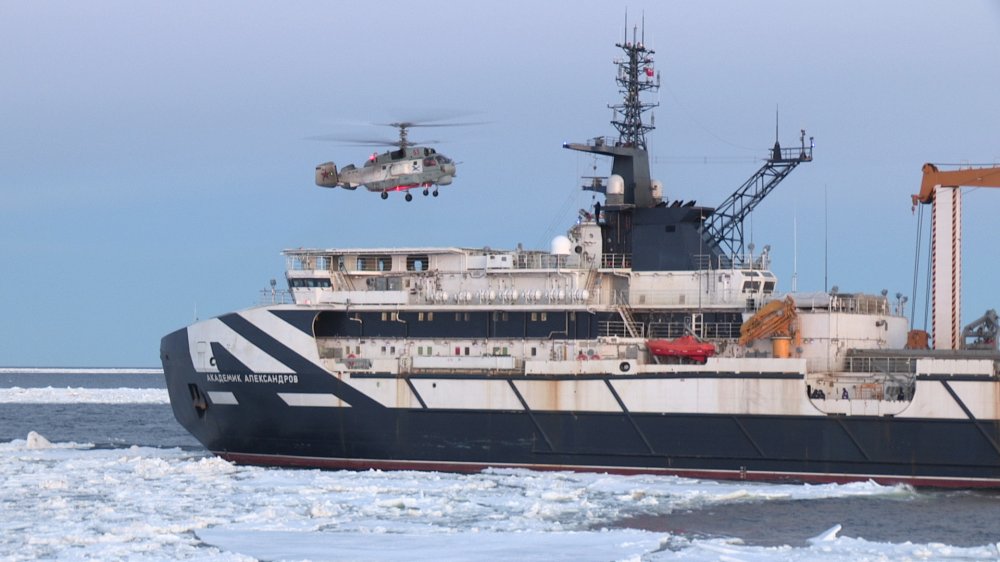 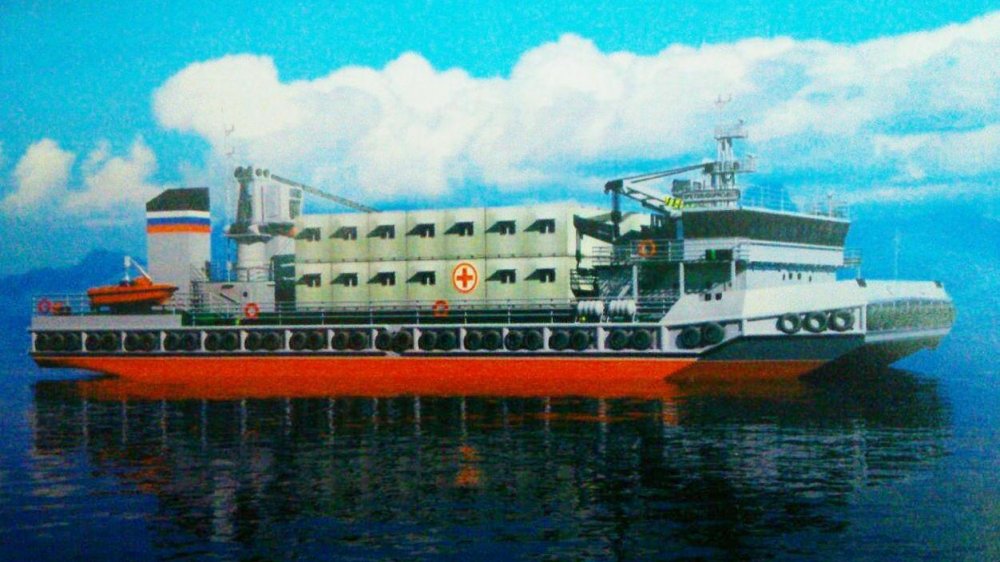 Among his tasks are the maintenance of repairs, the placement of a hospital or a ship control station; placement of personnel, power plants, etc. All those containers had me thinking it could potentially be the basis for the long prophesied 'barge of Kalibrs' for the river-canal system but at 22m wide its too big (canal max 16.6m)
Hole 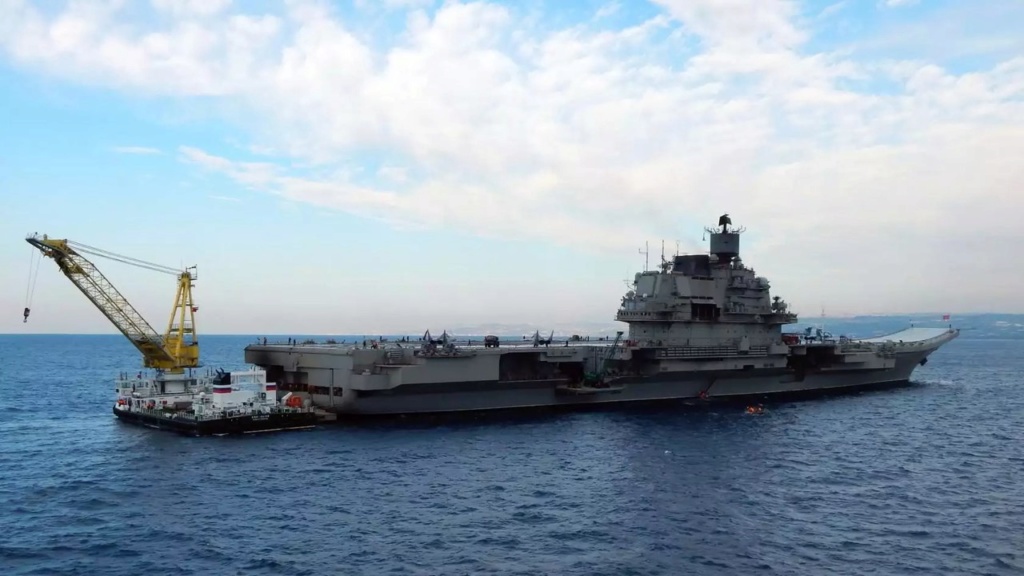 Elbrus has been escorting Gorshkov on its trip to East

Reconnaissance ships of the Russian Navy

Reconnaissance ships (or OSNAZ ships) play a special role in both peacetime and wartime. This is a class of ships solving completely specific tasks at various points in the oceans, ranging from ensuring control of forces at sea to the implementation of electronic warfare against enemy forces and assets. In peacetime, OSNAZ ships also solve a different set of combat training tasks, being in combat services far from their native shores.

In the course of the well-known events of the 1990s, the naval reconnaissance ship structure was greatly reduced, many units were excluded from the Navy and cut into metal, some were sold to private firms or transferred to the Navy of other states. As a result, all the special-purpose brigades were also disbanded, and the divisions were greatly reduced. What do we have as a result today? As of May 2019, the Russian Navy, being in varying degrees of readiness and technical condition, includes 20 reconnaissance ships of various ranks and projects. Of these, 6 units in the Northern Fleet, 5 units in the Pacific and Black Sea fleets, and 4 units in the Baltic Fleet.

But it should be noted separately that perhaps the modern Russian Navy continues to implement the Soviet practice of solving reconnaissance tasks with the help of floating ship repair shops, to which electronic intelligence and special communications facilities were installed. Today, in the Mediterranean Sea, three floating craftsmen perform the tasks on a rotational basis: the PM-138 and PM-56 of the Black Sea Fleet and the recently restored PM-82 of the Baltic Fleet. In turn, PM-56 of the Black Sea Fleet in 2017 was upgraded radio equipment.

In general, the command of the Navy in recent years performs the tasks of updating reconnaissance ships in two main areas: upgrading existing ships, including restoring previously deployed to the reserve, and building new ones, which, in turn, has been implemented as two units. After 2010, Marine Intelligence Centers were established as part of the Russian Navy fleets, which in turn were subordinated to the OSNAZ battalions. In general, each connection of OSNAZ ships in fleets has its own operational area for solving problems, that is, its own area of ​​responsibility:

1). The 72nd separate division of special purpose ships of the Baltic Fleet Intelligence Center (Baltiysk) is the operational zone of the Baltic and Mediterranean Seas, the Atlantic Ocean.

2). 515 separate division of special purpose ships 1225 of the Pacific Fleet Intelligence Center (Vladivostok) - operational zone of the Sea of ​​Japan and East China, waters of the Pacific and Indian Oceans.

3). 518 separate division of special purpose ships of the Northern Fleet Intelligence Center (Severomorsk) - the operational zone of the Atlantic Ocean and other areas.

4). 519 separate division of special purpose ships 1229 of the Black Sea Fleet Intelligence Center (Sevastopol) - the Black and Mediterranean operational area, other areas of the Atlantic Ocean.

But it often happens that ships perform tasks outside their area of ​​responsibility. In recent years, among them: the “Priazovye”, “Viktor Leonov” and “Vasily Tatishchev” SRZKs are solving BS problems in various points of the World Ocean from 6 to 8 months. Now let's talk about the naval composition of the intelligence of our Navy, in detail about each of the ships and its modern life: 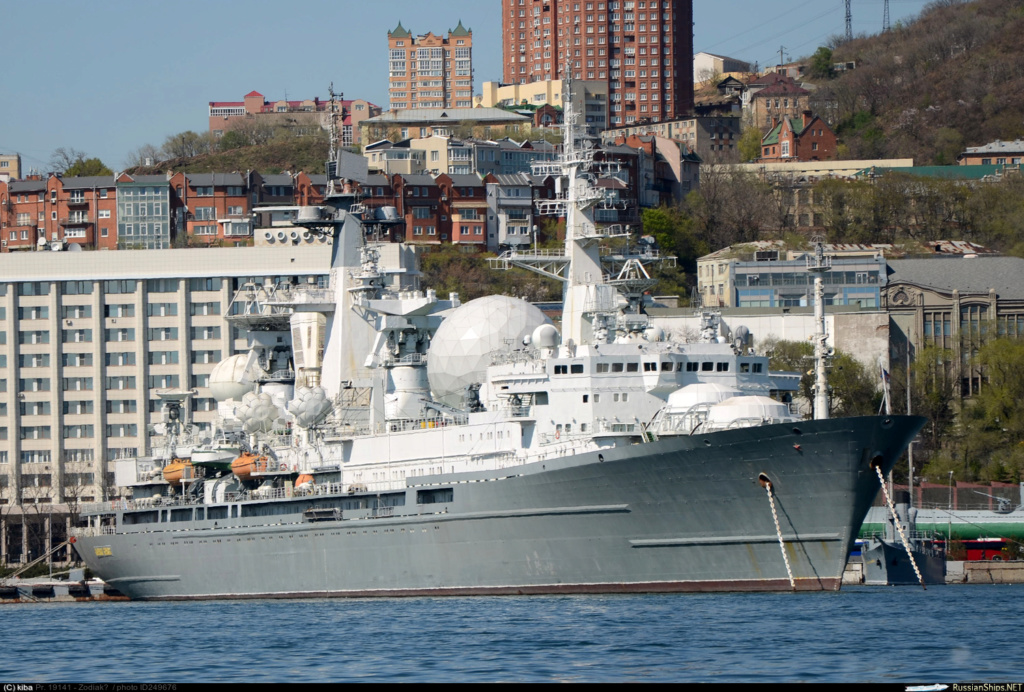 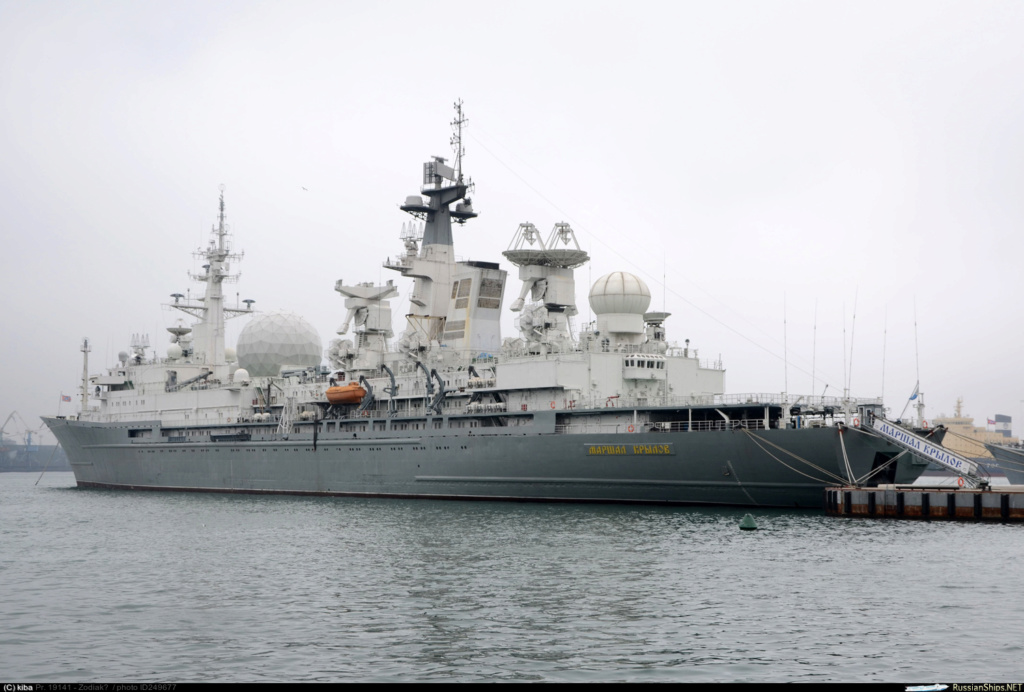 According to the developers, it will be claimed by small states that "know how to count their money"

Full displacement of the boat is 226 tons, maximum speed - up to 60 knots. The ship is equipped with four Club / "Caliber" cruise missiles.

Good for Iran...Good for Russia.

Picture in the link.
hoom

Interesting.
Not sure why this is in the Auxiliary vessels thread though. Angled Kalibr launchers but they store flat (for CoG?) with a 90 deg rotation to boot

If it wasn't moved, I clicked on the wrong topic

hoom wrote:Interesting.
Not sure why this is in the Auxiliary vessels thread though.

i put it here. Thread also is for small naval ships except auxiliary vessels
Cyberspec

The refit and upgrade of the first Small Missile Boat "Smerch" (Pr 12341) has been completed. Among other changes, the main armament has been changed from the P-120 Malakhit to the Kh-35 Uran....the rest of the boats of this class, still in service are planned to be upgraded 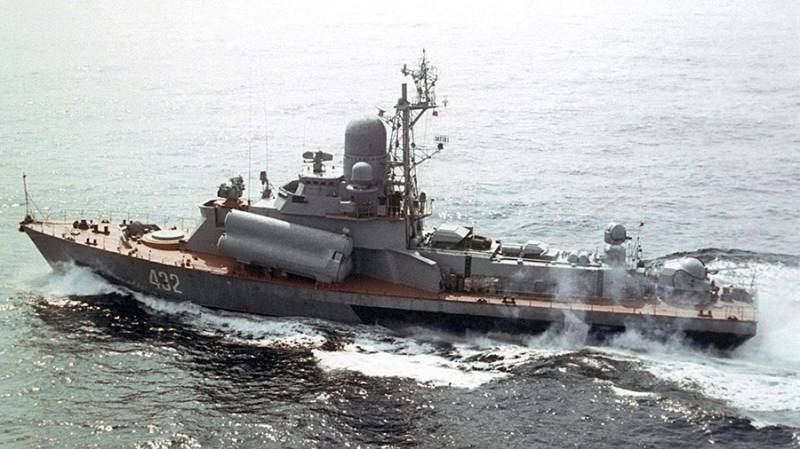 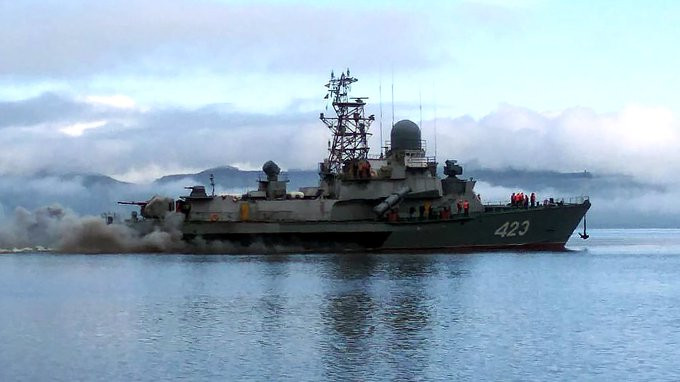 One below is not Russian operated (India or Vietnam probably), we still didn't have any photos with launchers added

PapaDragon wrote:
One below is not Russian operated (India or Vietnam probably), we still didn't have any photos with launchers added 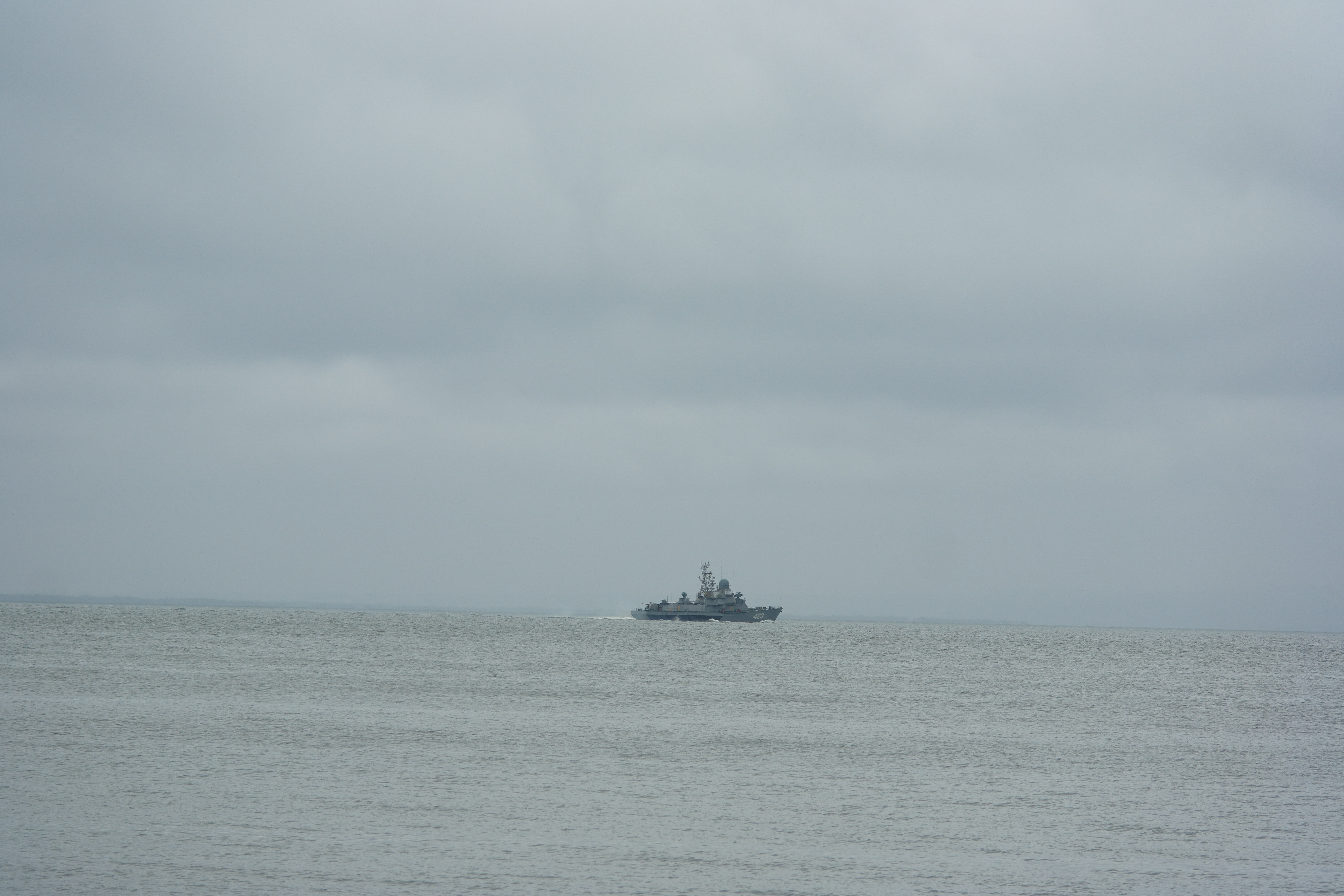 How long did they modernized this ship ? It was rather quick if I'm not wrong the contract was signed few months ago.
Cyberspec

Isos wrote:How long did they modernized this ship ? It was rather quick if I'm not wrong the contract was signed few months ago.

Roughly about a year as far as I can tell
PapaDragon

How two upgraded Molonyas should look like once completed hm what kind of guns are on stern? Never seen anything similar.
Isos

Nanushkas are suppose to carry 16 kh-35 each which seems enough subsonic missiles. I would have kept the 2x2 moskit on those ones. They are still very capable missiles.
PapaDragon

marat wrote:hm what kind of guns are on stern? Never seen anything similar.

AK CIWS in new package, same one they will be putting on Mercury (Derzkii)

Just different shape and material outside, gun is same
GarryB

Nanushkas are suppose to carry 16 kh-35 each which seems enough subsonic missiles. I would have kept the 2x2 moskit on those ones. They are still very capable missiles.

Moskits only have a range of about 120km, while Kh-35s can reach twice that range...

Kh-35 also have a land attack model and perhaps adding IR sensors on it could make it more stealthy too in the sense that while flying low it wont be broadcasting radar signals to alert targets of imminent attack.

The Tarantul class for Vietnam was upgraded with 16 Kh-35s too and it looks rather good: 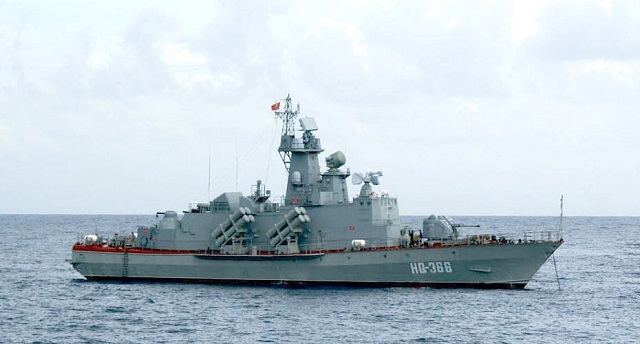 Isos wrote:Nanushkas are suppose to carry 16 kh-35 each which seems enough subsonic missiles. I would have kept the 2x2 moskit on those ones. They are still very capable missiles.

Stocks of Moskits, Granits and other Soviet era missiles are slowly being depleted and no new ones are being made

Time to move on 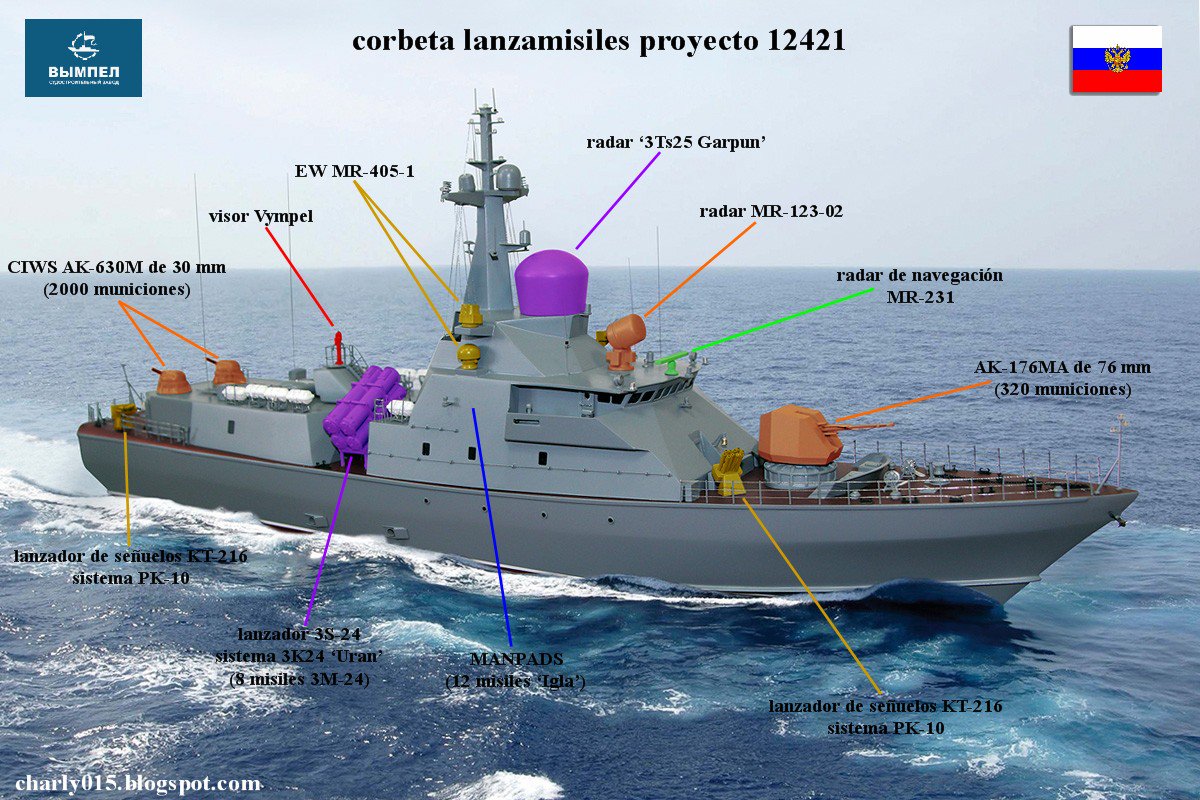 Worth re-iterating these 2 Molyinyas are incomplete hulls being completed to modified design.

I find it odd that they're not sticking Gibka on ships like this, far from the best air defense but surely better than just AK-630s.
Hole