Is this a drop tank? potentially from an aircraft that was actually engaged by SAM?

Probably yes , claims said LNA shoot by mistake a friend aircraft which could lead to secret strikes by Egypt or at least Egypt gave LNA some Mirage 5 or Mirage 2000 .


Yesterday GNA tried to attack an air base in the west but they failed and LNA made a counterattack and reached to Tunisian borders , very big advance by LNA .
ultimatewarrior

#LNA forces have downed a #Turkish #TB2 south of #Tripoli 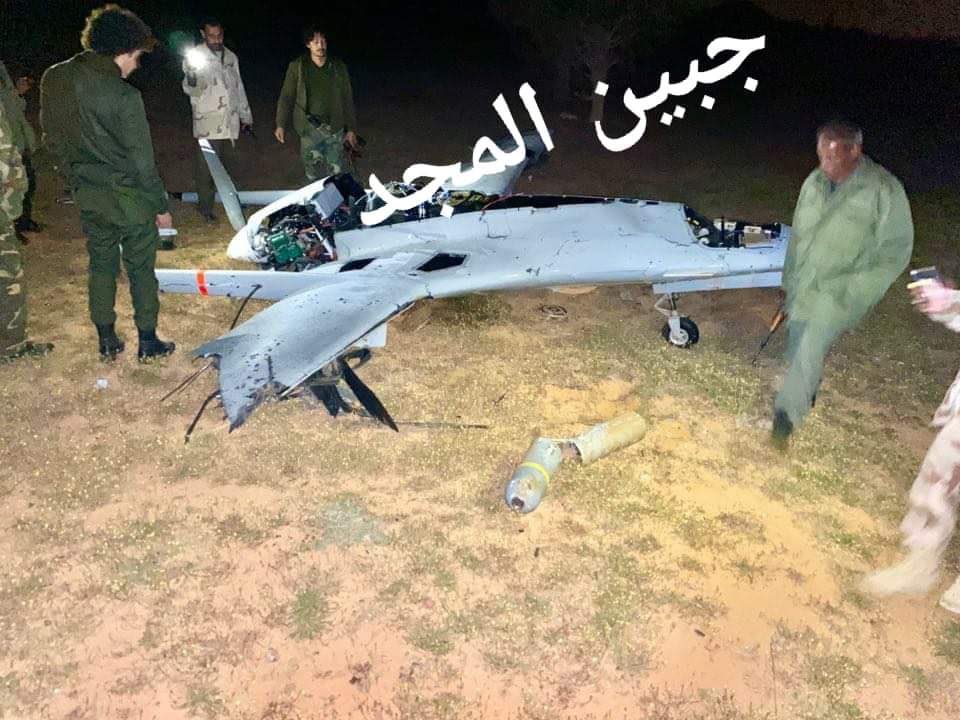 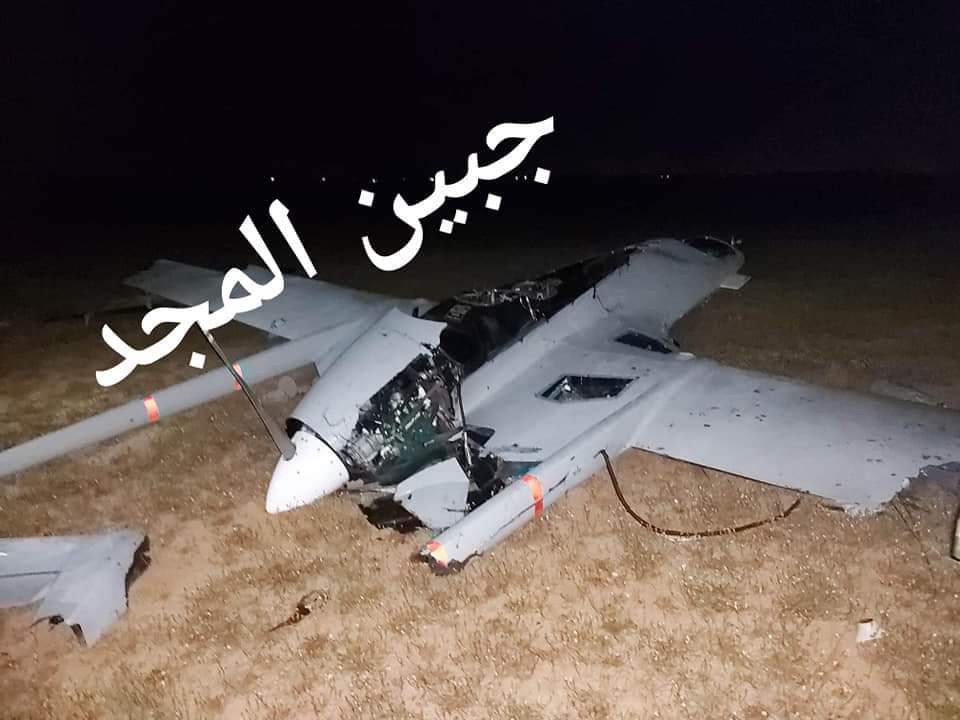 We are launching a new #CSDP operation today. With #IRINI, the EU significantly contributes to efforts aimed at ending the conflict in #Libya and shows that even amidst #COVID19 crisis, we are committed to promote peace.
ahmedfire 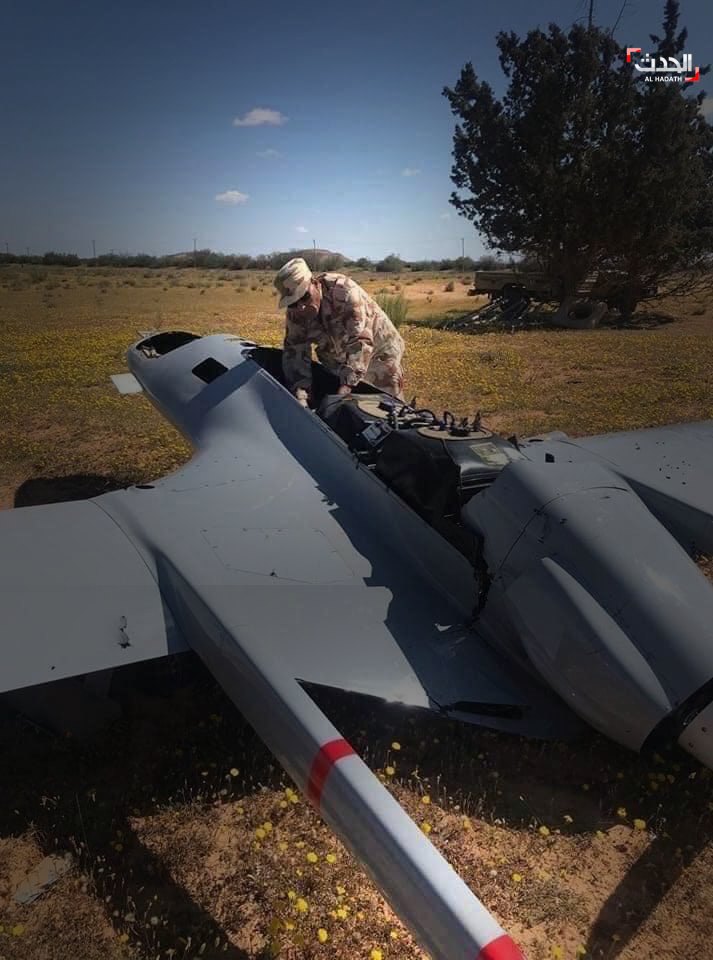 They crash but never get destroyed totally. Could even be refurbished and put back into service ...

Tail structures seem to be a weak point... though perhaps destroyed in the crash.

Across a few crashed drones and make your own tails you could probably get a few flying again with some work... It's RIM-66 missile , seems it was intercepted by LNA defences .
Vladimir79

It is a Mach 3.5 SAM, it is not likely LNA has the defences to stop it.
Isos

It's an air defence missile. Probably used against a drone.
Isos

It is a Mach 3.5 SAM, it is not likely LNA has the defences to stop it.

It could but it could also do much worse...
ahmedfire

The missile didn't explode , the warhead and missile body were found 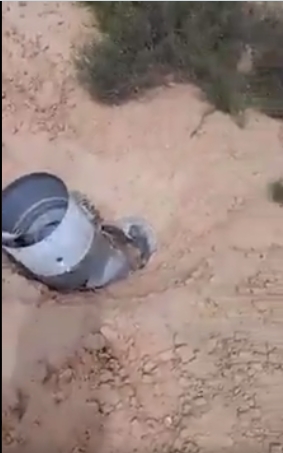 Nice catch, time to sell some stuff on "eBay"

Nice catch, time to sell some stuff on "eBay"

That's piece of junk. No one wants it.

I hope for those turkish sailors no one fire a ASM at them because if it can intercept a drone what do they expect against a low flying anti ship missile ?
ahmedfire

I suggest TB-2 to be sent to Russia , as Turkey already sold it to Ukraine.

The Libyan Arab Armed Forces #LNA down a #GNA L39 plane over the Al-Washaka near AbuGrian, killing 2 crew members.

ahmedfire wrote:I suggest TB-2 to be sent to Russia , as Turkey already sold it to Ukraine.

For what ? Pantsirs destroy them pretty easily. There is nothing to learn from that piece of crap. At 5 million each Turkey just lost probably close to 100 million $ in Syria and Lybia with this drone.

Then add the crappy Anka which is 2x more expensive and the shitty MRAPs their lybian militias lost in huge numbers. In 2 or 3 months they will have lost almost 1 billion in equipment.

Always interesting to look at designs others produce, remember we are talking about a design that probably had lots of competition, so it probably does a few things right and it never hurts to look at solutions other people came up with for various problems.

They might use a clever datalink system that is more efficient or lighter and longer ranged than the ones you currently use, or the camera might be better stabilised or use particularly good stabilisation software or whatever... or you might find there is space for a HE charge if you want to fit it... which would be useful information to those having to face it not to just let it fly towards them for example.

It might not be of any value at all, but just seeing some alternative choices or similar choices they made in the design is always useful for any designer.

When starting to design something you always analyse existing solutions to see how they solved the various problems... it is not a question of copying as such, but just like with the Soviet Buran and the US Space Shuttles... if NASA is going to spend 5 years and 2 billion dollars working out the perfect exterior shape... why waste your own money trying to make it different?

Of course they didn't want their shuttle to be the same and it is actually rather different... think of the US space shuttle as an C-130 transport plane but because it is going on an enormously long trip it needs an enormous external fuel tank to carry all the fuel it needs, which makes it too heavy to move even at full engine power so two solid rocket boosters are needed to get it moving. The Buran is a glider that sits on top of a big powerful rocket called Energyia... you can actually replace the Buran with a fairing with a 120 ton object to launch directly into space if you want to, which makes it much more flexible and actually much cheaper...
ultimatewarrior

Destroyed ACV-15 of the people who hate Russia 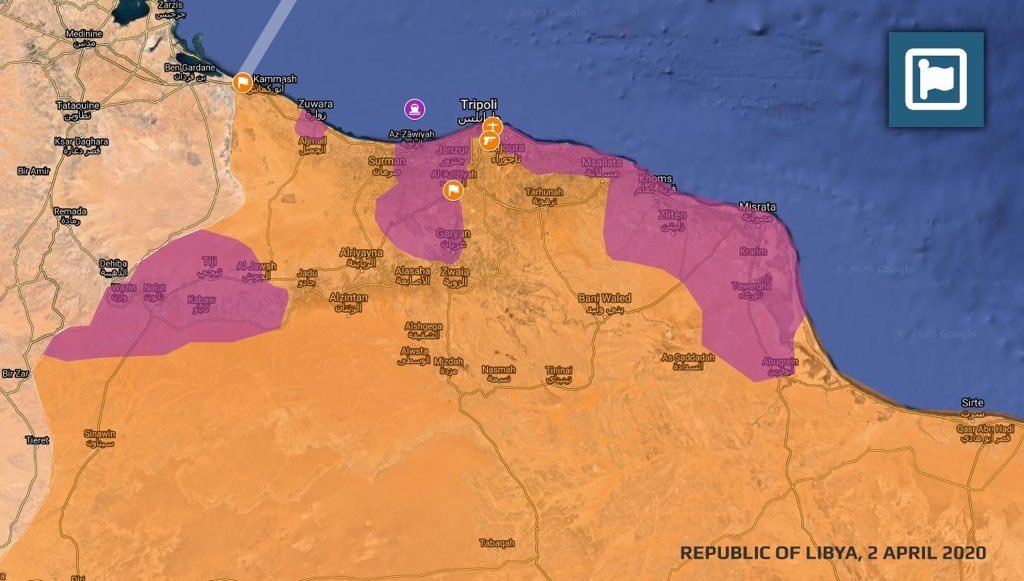