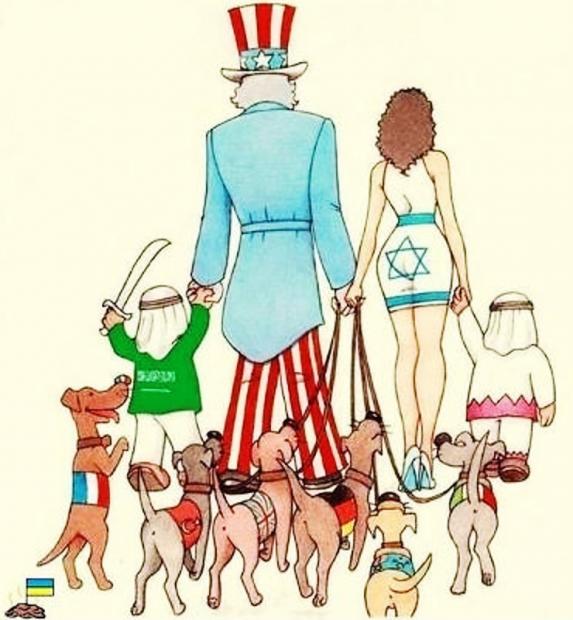 ahmedfire wrote:Nice video , this supposed to give more work experience to the Egyptian Engineers and workers to build such corvettes .

One of the better parts in that video that George posted of the Gowind assembly in Egypt is actually a couple of parts besides the entire video of the sections being put together is the part where they had to insert what I believe is one of 2 propeller shafts. That is such precision work with very large and heavy material with no margin for error whatsoever otherwise it creates a vibration that results in a very bad destruction! lol. The other part was at the end for a while I could never figure out what that yellow mini sub thing that they lowered from the stern until I realized it's the towed sonar. At least that's what it seems to make the most sense. 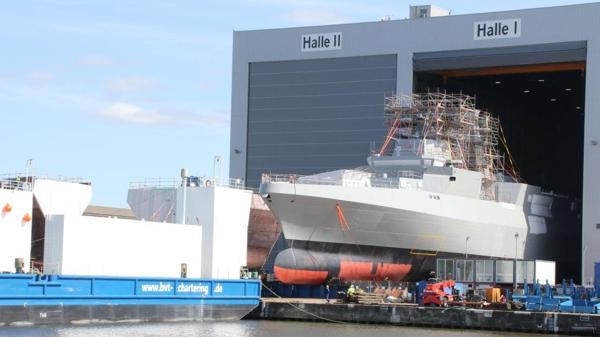 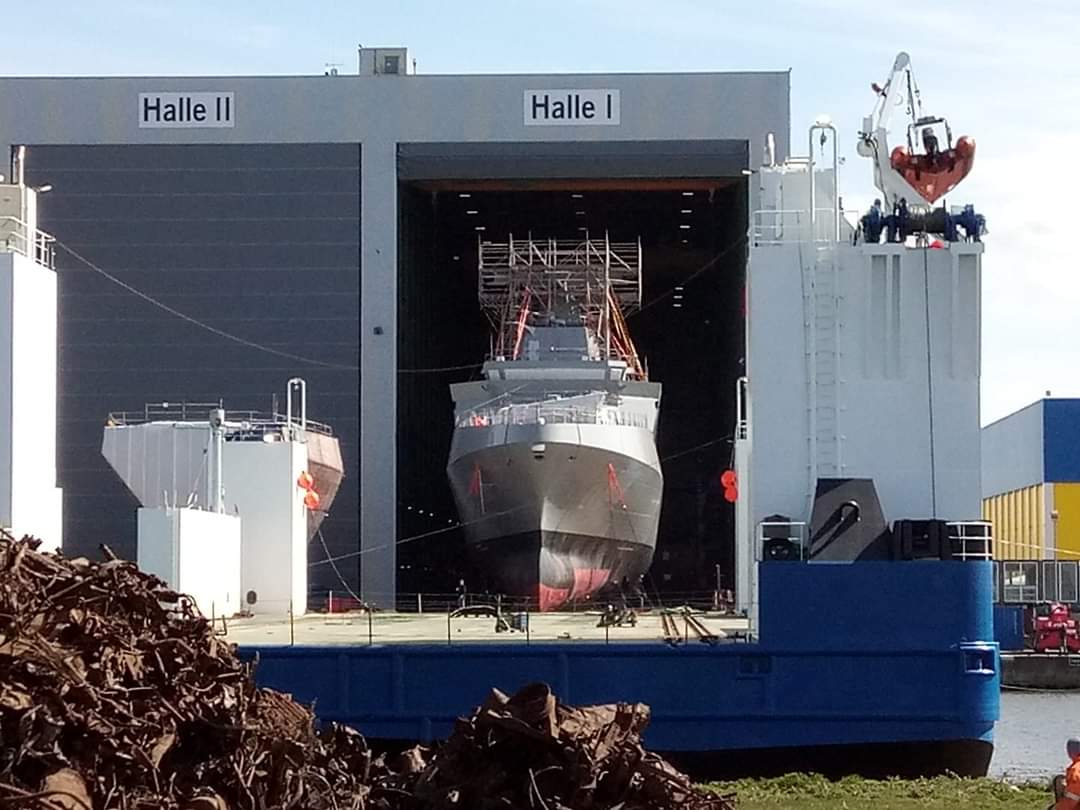 I realized it's the towed sonar. At least that's what it seems to make the most sense.

Yes it's Captas towed sonar ,variable depth one to detect submarines at deeper depths at Sea State 6 .The ship also has other hull monted sonar at the bottom which detects subs and mines at close depths . 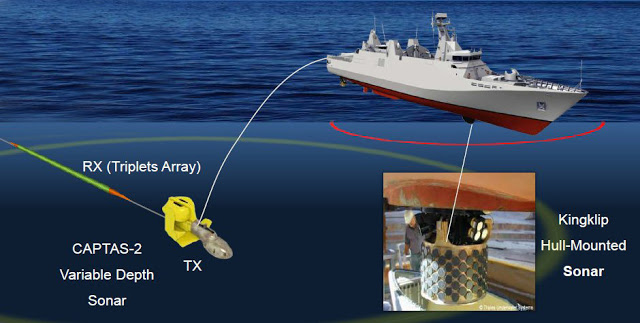 I realized it's the towed sonar. At least that's what it seems to make the most sense.

Yes it's Captas towed sonar ,variable depth one to detect submarines at deeper depths at Sea State 6 .The ship also has other hull monted sonar at the bottom which detects subs and mines at close depths .

Very cool Mr. Ahmedfire.  That looks more like a Meko than a Gowind but I bet the latter has the same technology, especially the towed sonar as it was clearly shown in a quick clip in one of the videos.

The other thing that is crazy that they must do periodically as part of an organized maintenance program is even with all that bottom paint against marine growth, it's still not 100% effective (ask me how I know lol) and the frogmen who have to clean the bottoms of these ships periodically have to be careful around those hull-mounted sonars especially when scraping those ever so annoying barnacles.

Wow, how awesome are the Italians? The first modern era land attack system delivered to Egypt since the Russian Frogs and North Korean missiles. Aside from the longer range Aster 30, the Volcano is an offensive missile. I guess we can say the SCALPs were first, but for the navy, this is huge. 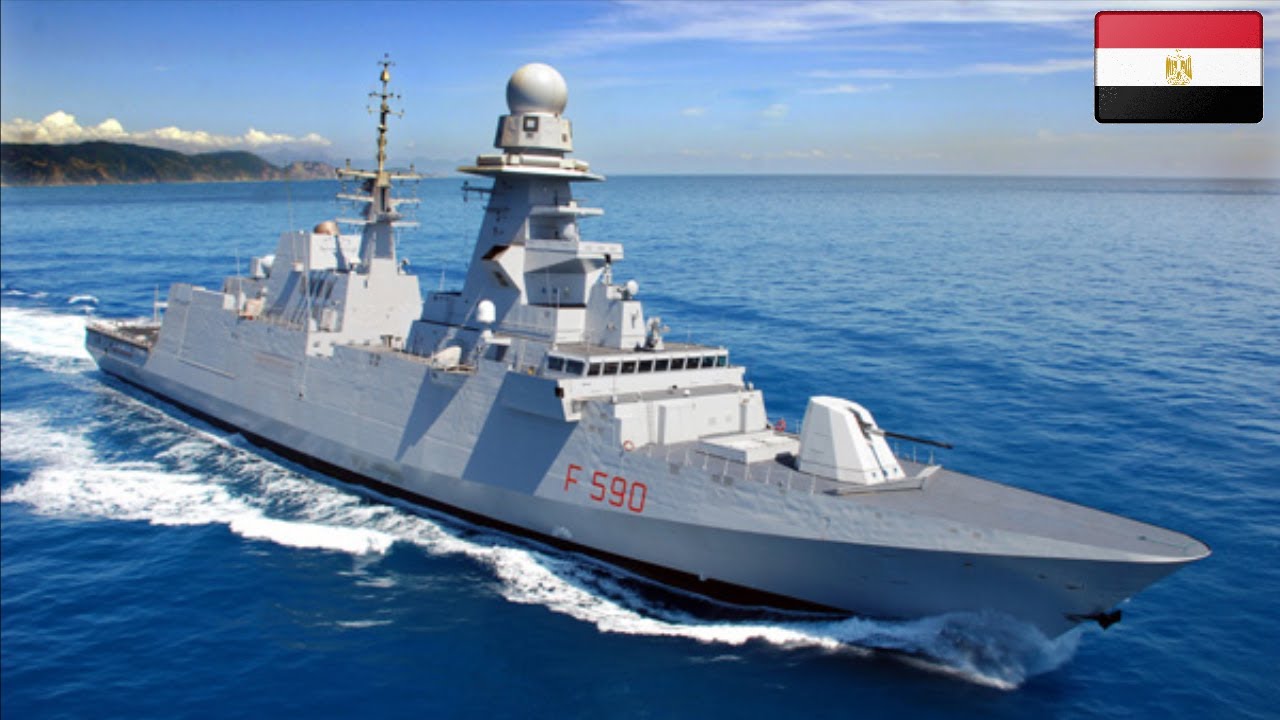 Maneuvers during the opening of a new naval base .

July 8th, 21:51
On July 7, 2021, in Kiel (Germany) at the German shipyard Kieler Werft of the thyssenkrupp Marine Systems association (TKMS, the former Howaldtswerke-Deutsche Werft GmbH / HDW shipyard, part of the thyssenkrupp concern), a ceremony was held for the transfer of the fourth built for them to the Egyptian naval forces. diesel-electric submarine S 44 project 209 / 1400Mod. The ceremony of handover to the Egyptian Navy of the diesel-electric submarine S 44 of project 209 / 1400Mod, built at the German shipyard Kieler Werft TKMS. 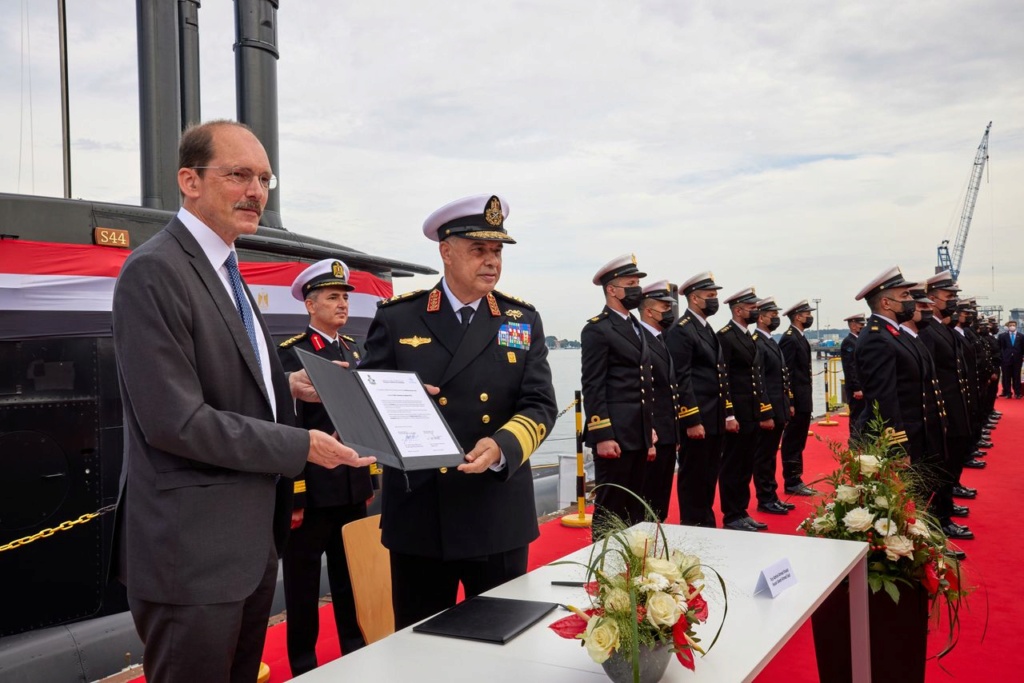 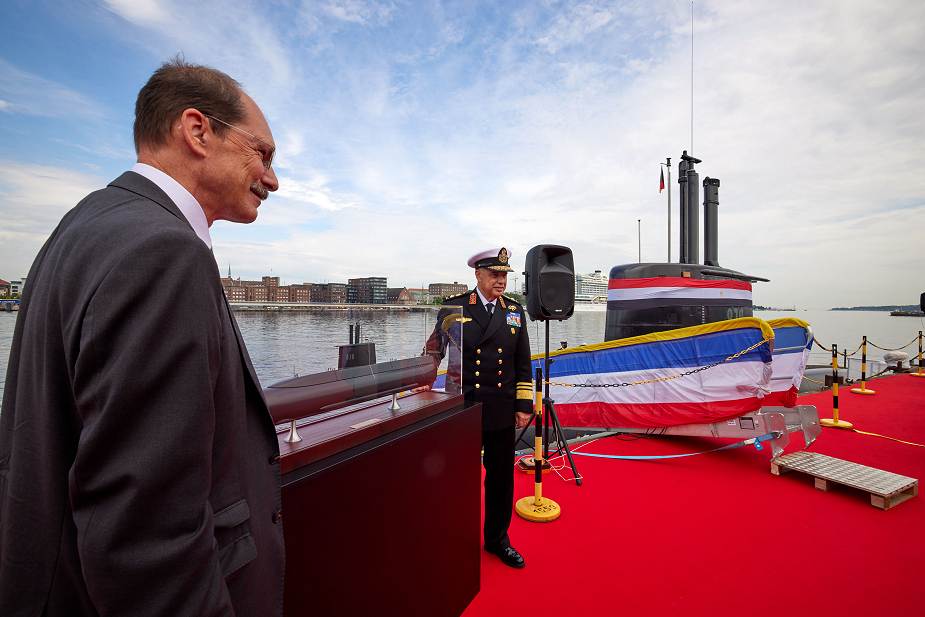 ahmedfire wrote:Maneuvers during the opening of a new naval base .

Pause it at minute 2:47 and take a close look at the camo on those two MiG-29Ms banking and zipping by.  Let me know what you think and why you suppose they're in that color when the rest of the fleet appears to be in that light & dark blueish/grey?  Very interesting since that seemed to be the original color camo and they appeared to have changed it to the blue upon delivery.  But this exercise was last year in Egypt and not back in 2016-2017 when they were delivering them.

Curious to hear what you think.

George1 wrote:The lead Egyptian frigate of the German construction of the MEKO 200EN project at sea

There is news on the local front that the military is seriously considering and negotiating with DCNS and the French government for a possible future plan to acquire these three platforms.

Barracuda Submarine (considerably larger than the Type 209s & of course the Romeos currently in the EN.)  Basically a blue water submarine. A PA-2 French aircraft carrier with conventional CATOBAR for takeoffs and 3 wires for arresting cables. 20 Naval Rafale M.  They'll likely shift 2 of the 8 E-2C Hawkeyes to the carrier for AWACs (if they go through with it, of course) and not sure yet what they're thinking for utility helicopters on that deck.  I'd like to see them get the NH-90 also for SAR duties or the latest version of the Sea King but not sure they still make those.

Rafale M with anti-corrosive paint, I think it has beefier landing gear than the land-based one for the pounding of carrier landings and of course, an arresting hook. EDIT:  I originally mistakenly labeled the potential submarine as the Scorpene but that was wrong.  It's the Barracuda and I have edited the post and corrected it.

The Most Recent picture of the Egyptian Navy's newest frigate member, the first of 6 MEKO A200EN #904 named ENS Al-Aziz. Appears to be wrapping up its sea trials which started last month or so and could be delivered soon. 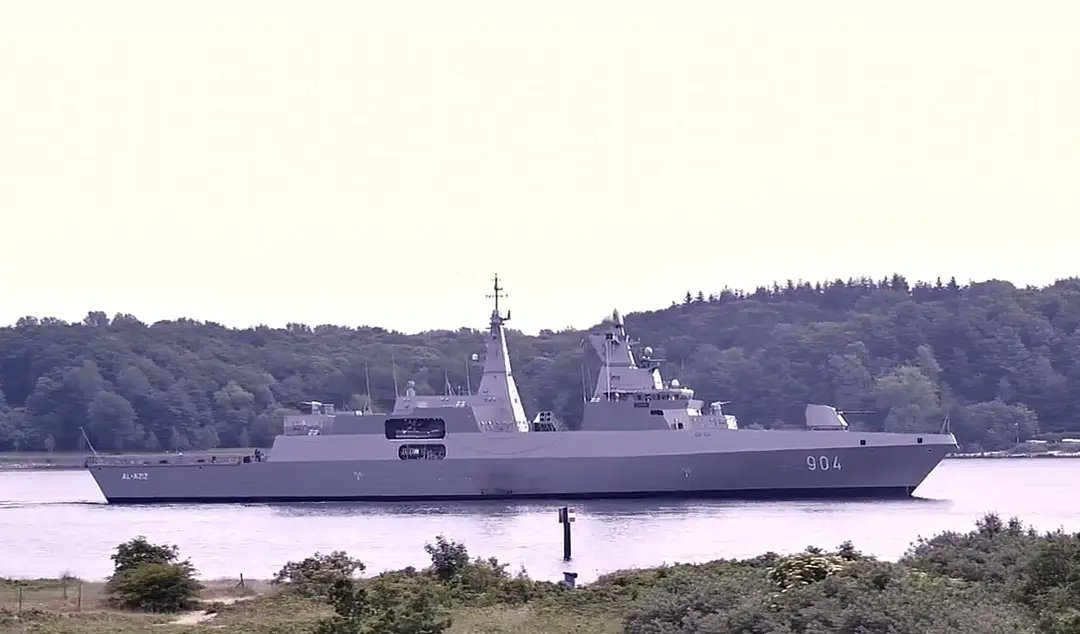 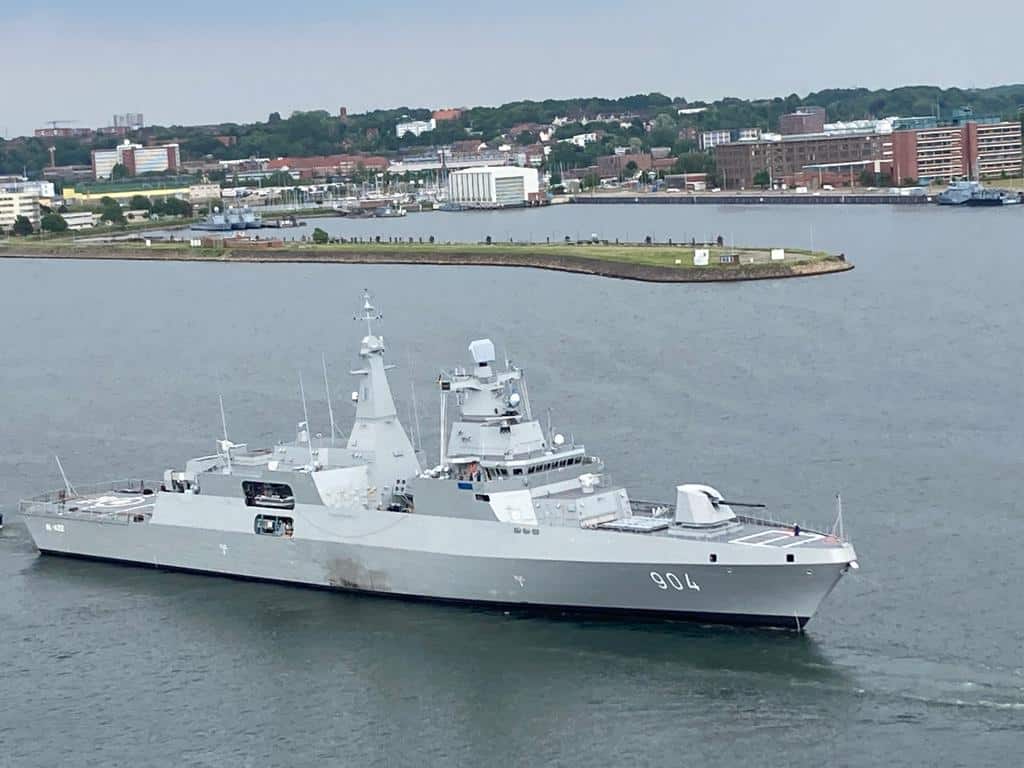 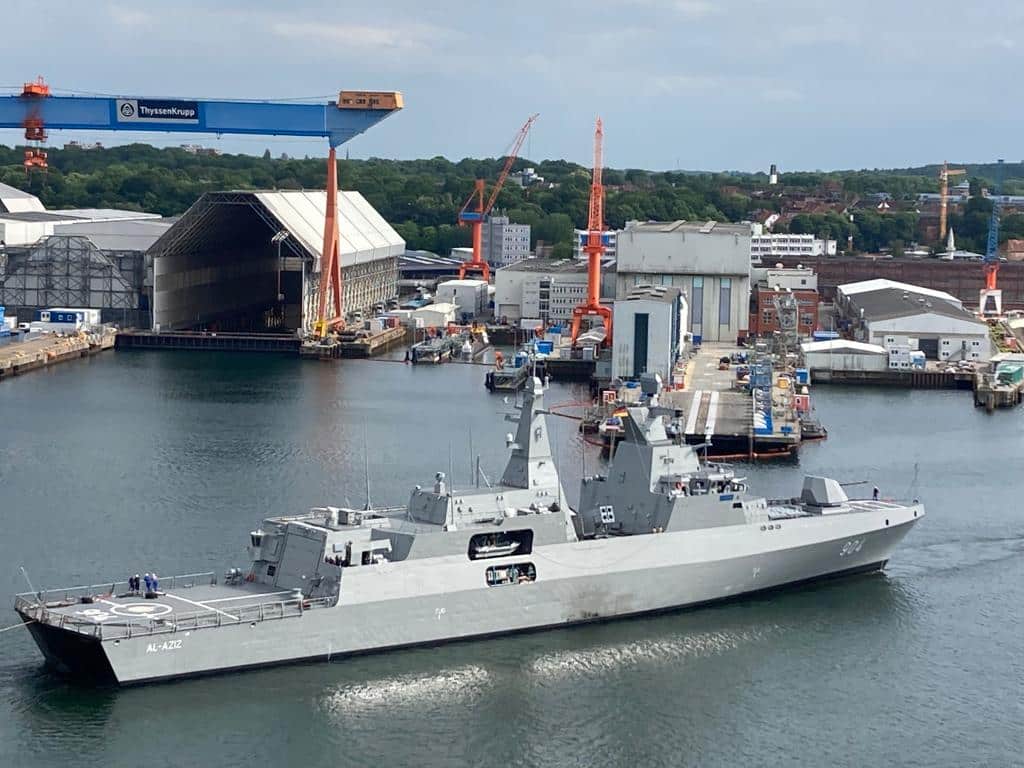