Uran-9 -great footage on the unit

MOSCOW, May 11. /TASS/. Russia’s newest reconnaissance and attack robot will be tested in 2018, the CEO of the Kalashnikov concern (an affiliate of Rostec), Aleksei Krivoruchko, told TASS.

Earlier, he told TASS in an interview that the 20-tonne robot was in the phase of test runs.

Kalashnikov last year demonstrated its first robotized system Soratnik developed at the request of the Defense Ministry. It is an armored tracked vehicle equipped with a computerized control system, encoded radio communication, target detection and monitoring equipment and a combat module. This robot is capable of interacting with other automated combat units, including Zala Aero drones.

Can interact with drones too... that is interesting.
PapaDragon 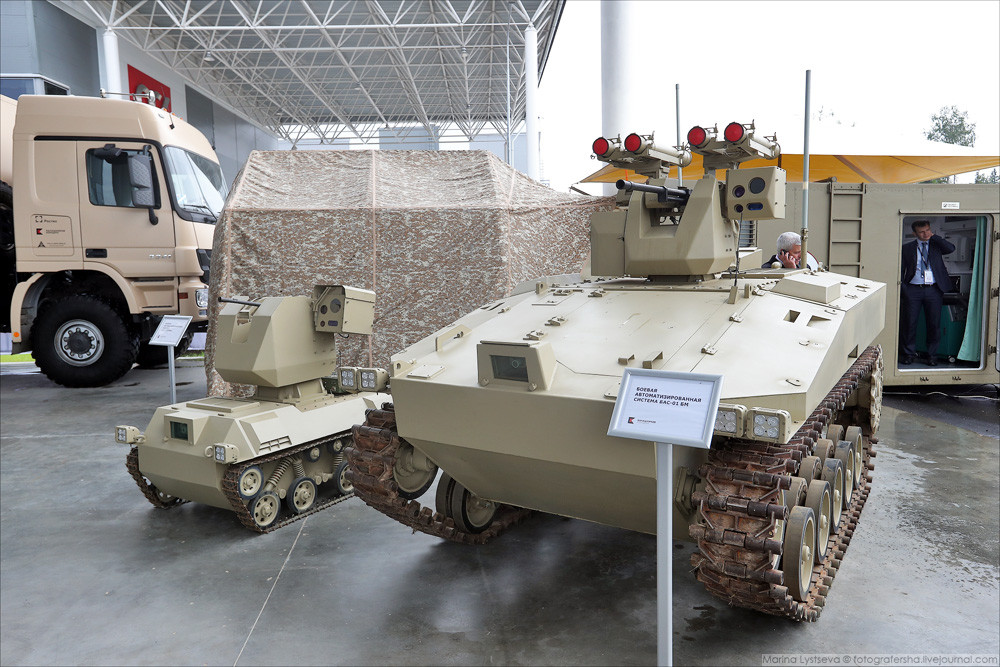 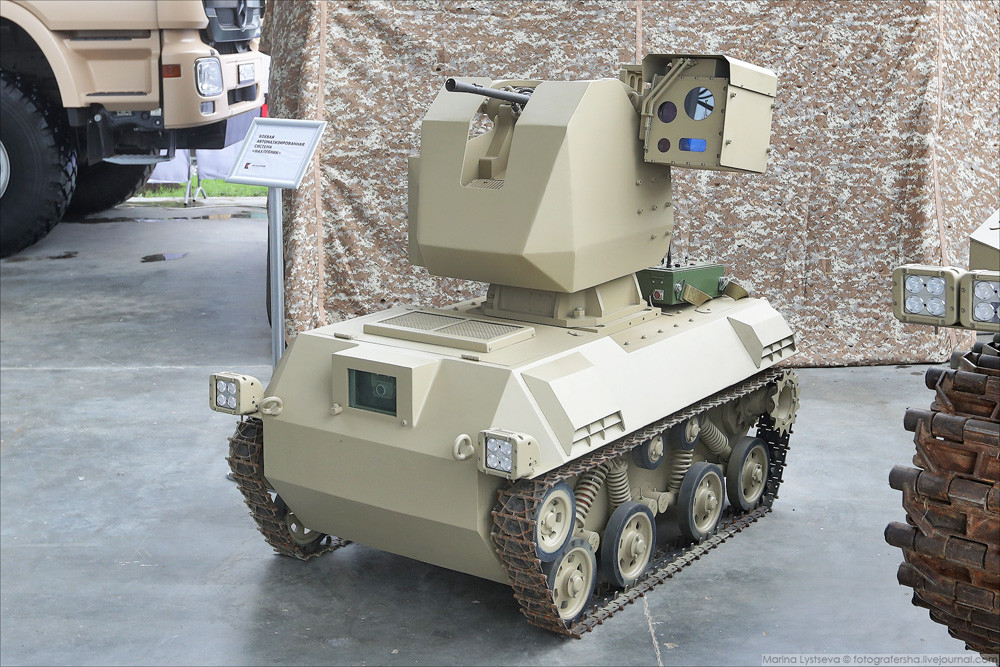 Considering it is a vehicle platform I wonder if they ever considered going to water cooled barrels for machine guns again for the sustained fire role and thousands and thousands of rounds of ammo.

This smaller vehicle clearly has the PKT heavy barrel version of the PK GPMG often fitted as a coaxial weapon on many manned armoured vehicles.

Such a small vehicle would likely not be used for fire support missions, but I wonder about a fire support vehicle used to fight off perhaps enemy infantry attacks where sustained fire is needed.

Water could be carried in large volumes, which could be used as drinking water for troops the vehicle supports in dry areas, but for sustained fire for machine guns and the like... the weight would not be an issue for a vehicle mounted weapon and not overheating would be useful for a vehicle as it would carry rather more ready to fire ammo than an infantry weapon could and therefore overheating becomes a real issue.
PapaDragon

.
Smaller one's job is to mop up anything that big one misses. 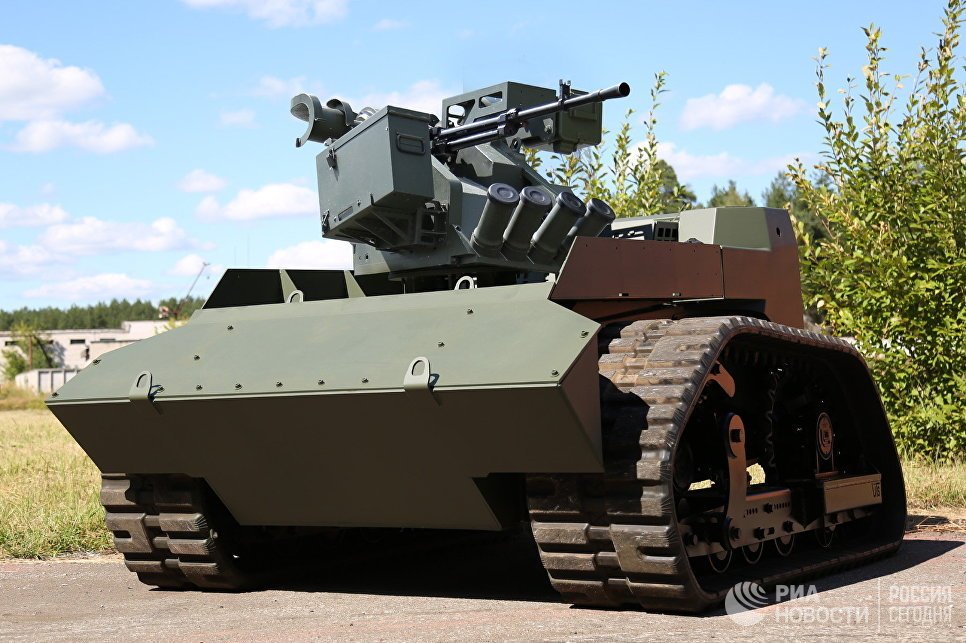 You can even see that the gun mount is stabilized at the 0:46 mark. Neat stuff. Some of these robots seem to lack stabilization, maybe because of the cost.
Project Canada MOSCOW, January 19. /TASS/. The Soratnik automated fighting vehicle has undergone trials in conditions close to a real combat at temperatures of over 30 degrees Celsius, the press office of the Kalashnikov defense manufacturer told TASS on Friday.

The Kalashnikov Group is the developer of the Soratnik unmanned strike vehicle.

A video posted by media outlets showed a Soratnik combat vehicle moving along the sea coast and firing weapons against targets. One of the videos posted on the YouTube says the Soratnik has been tested in Syria.

"The Soratnik automated fighting vehicle has been tested in conditions maximally close to a real combat environment. These trials confirmed the vehicle’s characteristics and proved the possibility of using the robotic system at air temperatures of over 30 degrees Celsius," the Kalashnikov Group said.

The scientific potential created in the process of developing the Soratnik robotic vehicle and the results of its trials will lay the basis for perspective robotized fighting systems, the defense manufacturer said.

The Soratnik armored tracked vehicle is designed to conduct reconnaissance and transmit data, patrol and protect territories and important facilities, carry out mine clearance and clear obstacles.

The Soratnik operates in three control modes and its weight does not exceed 7 tonnes. The robotic system can develop a speed of up to 40 km/h. The vehicle can operate within a radius of 10 km in a remote control mode and clear visibility.

The vehicle’s tracked platform can carry 7.62 mm and 12.7 mm machine guns and also an AG-17A 30 mm grenade launcher. The combat module is furnished with a gun stabilizer and is capable of detecting, tracking and destroying targets on its own, determining their type. Besides, an option is envisaged to mount eight Kornet-EM anti-tank guided missiles on the Soratnik. 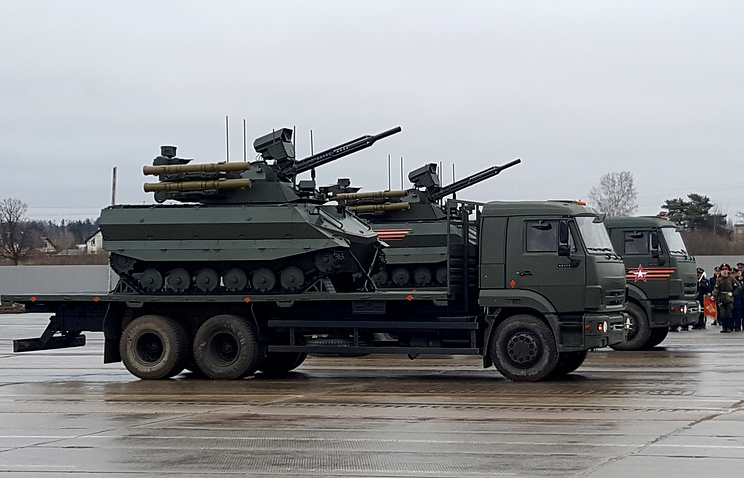 N.B.During one particular TsSN FSB operation back in Dec. 2016, when - amongst others - “Emir of the Islamic State(ISIS)” in the North Caucasus, Rustam Aselderov was killed, in addition to Pecheneg (6P45) m.gun,the Tornado was spotted w/ 2x RPG-29s (7P27) 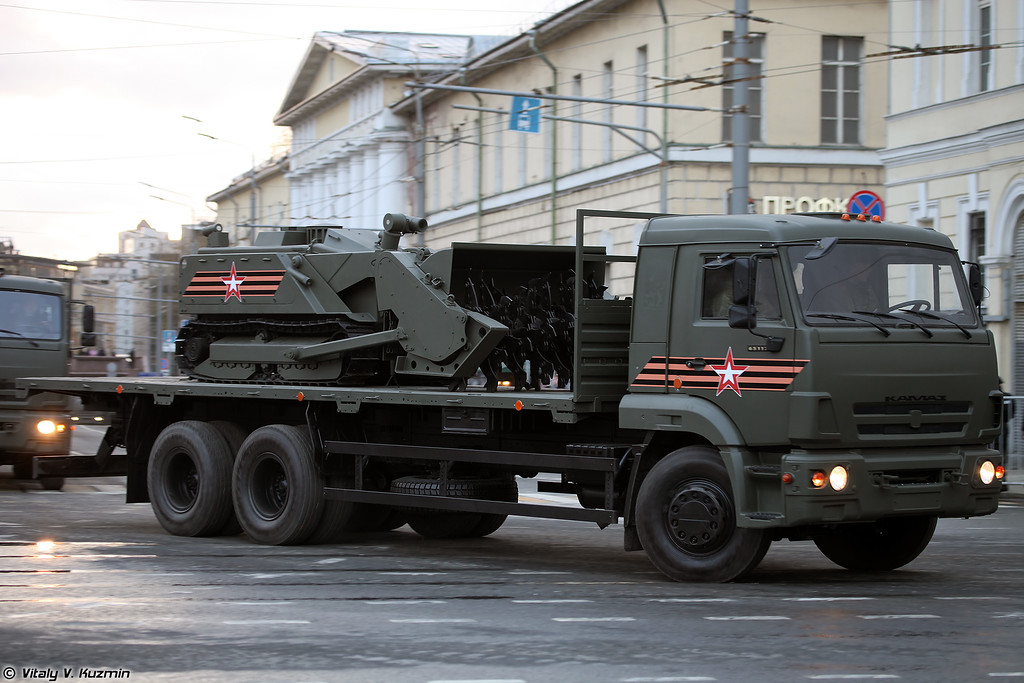 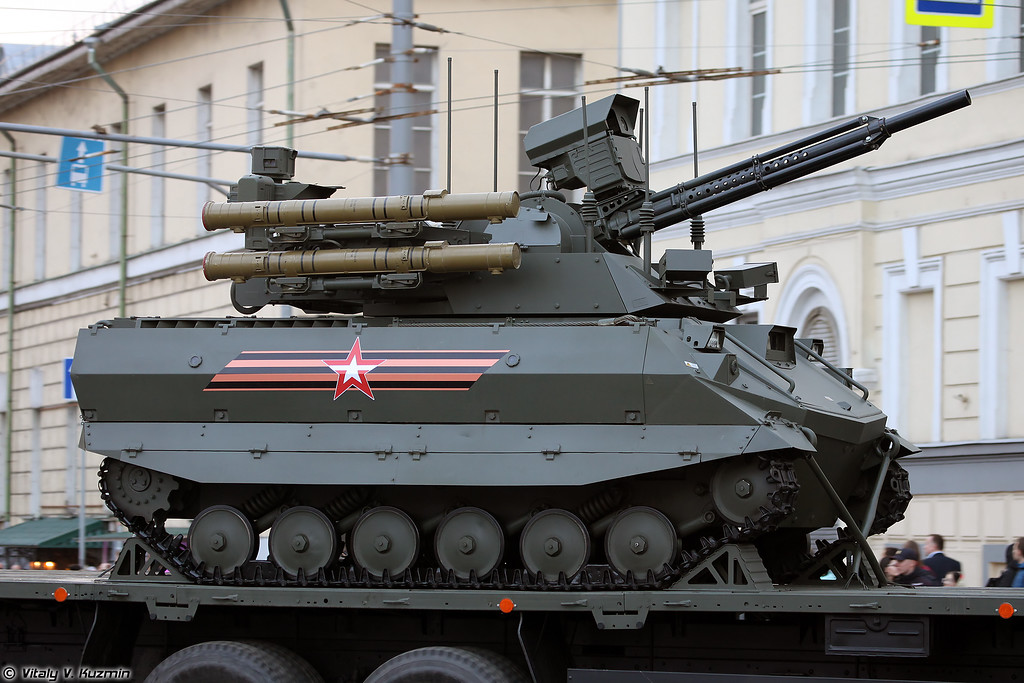 Does anyone know how many Uran-9s will eb purchased thoes things would come in handy during low intensity conflicts.

Just watched quite a long video about some fighting in Syria where the camera and the Syrian army troops were based in the shell of a building and there was some open ground in front and then a wall and then a road and another wall and then beyond there was a concrete building that has large holes all over the place and the enemy were in that building... you could occasionally see them popping up and shooting.

Well it took a while but Syrian army troops ran in the open to the first wall and then across the road and then over the other wall and finally up to the enemy held building to try to take it, but they came under fire from an enemy HMG and had to fall back... without casualties...

As I was watching this video I realised how valuable even a Nerehta would be with a belt fed 12.7mm HMG would be.

When you see the locals fire HMGs it is usually a half aimed short burst repeated over and over... not properly aimed... simply because when you start a burst there is no way to control where most of the rounds go...

With Nerehta, you have a zoomed in video image... you can roll over open ground scanning for targets from likely directions... in fact a serious upgrade would be one of those sound sensors that detects small arms fire, the calibre and direction and could use that to point the camera to where the shooting is coming from so you can fire back... most of the rounds seem to be rifle calibre so it should be easy to armour the vehicle against that... anything more powerful is unlikely to hit anyway....

This would be extremely useful technology... I am sure those soldiers who had to run out over open terrain would agree... and for the enemy to see a little hard target roll over that shot back at you personally when you fired at it... like it could actually see you... that would be scary as hell.

Another bonus is that with a 12.7mm weapon it could actually shoot through the walls of the building the enemy was hiding in... so no longer cover... only concealment... which is never good enough in real war.

Or shoot an RPO round rough one of the holes/windows. After that use the MG and finish the few survivors off.
Hole

Did someone notice the rotary rocket launcher? 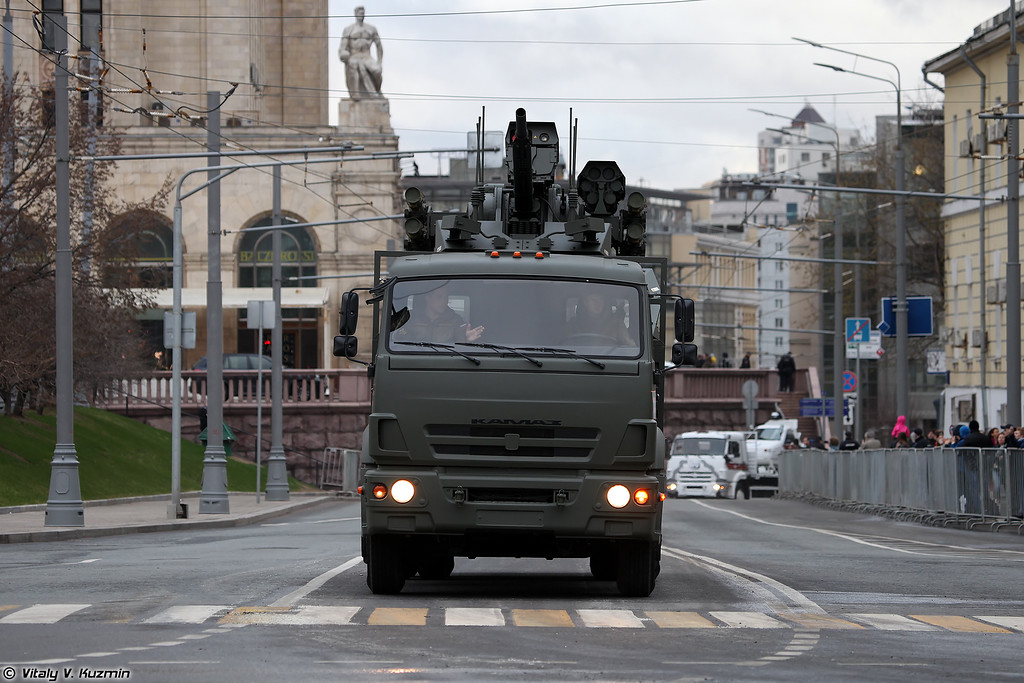 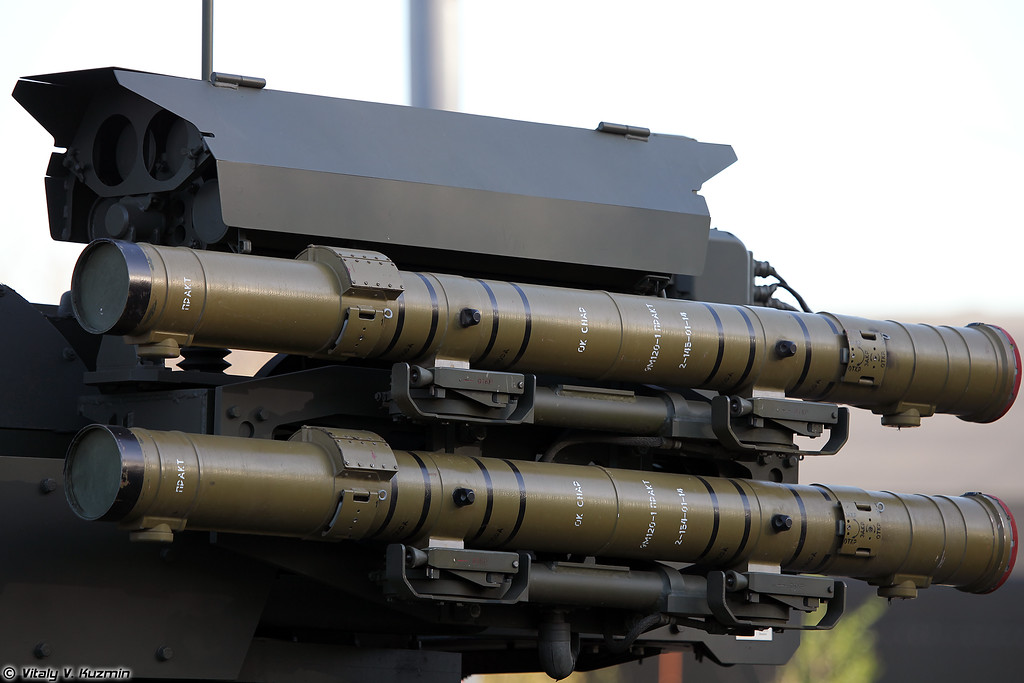