They very well knew the difference ... just like israeli knew it was a US ship they were bombing. Like we say in french, dogs don't make cats

Only a stupid person can trust such people.
Big_Gazza

Isos wrote:They very well knew the difference ... just like israeli knew it was a US ship they were bombing. Like we say in french, dogs don't make cats

Only a stupid person can trust such people.

You may well be correct, but if the Aegis was all it was claimed to be, the true nature of the target should have been absolutely obvious, and the weapons officers would have been aware they were committing deliberate mass murder if they acted on the command to shoot.

As with most Murican systems, their effectiveness is exaggerated to the nth degree by a full-spectrum propaganda machine designed to fool people into thinking that the Seppostanis are somehow Godlike beings whose dominance cannot be challenged (with the secondary aim to secure sales for the privately owned MIC).  Its all BS, but still they preach their "exceptionalism" and weak-minded fools buy into the mirage.
GarryB

...except the USS Vincennes couldn't tell the difference between an Iranian Airbus A300 (on a regularly scheduled flight flying with civvie transponders and climbing to cruising altitude) and an F-14 Tomcat (allegedly conducting an attack run with non-existent air-to-ground munitions).

Murican butt-fuckery at it finest. All hail to the Monkey Empire.

I did a paper on that very incident in the late 1990s... it shows what can happen in a pressure situation without access to the correct information and a design bug in the system.

The problem was that the civilian aircraft took off from a joint civilian/military airport... another problem was the commander of the AEGIS class cruiser was an aggressive dickhead.

There was a US carrier in the area but the commander pulled his aircraft back because of the over aggressive antics of the cruiser captain.

There were US ships in the gulf and they reported boghammers in the area, so the AEGIS class cruiser goes sailing in... it sends it helicopter out which gets warning shots fired at it... naturally... what the US calls boghammers are actually Iranian navy vessels used to police the gulf so when you send a helicopter towards them, with no way to communicate by radio you fire a warning shot to say go away this has nothing to do with you you American pricks.

The cruiser captain took this to be the equivalent to being fired upon so he had a free hand so he went charging after these small boats firing at them with his main gun and actually sailing into Iranian waters (which technically makes it an act of war and a war crime).

It was at this point the carrier commander pulled his aircraft back because of the actions of this ship captain... read between the lines... the commander of the US forces in the region feared this guy would shoot down one of their own aircraft...

At this point the civilian airliner at the combined civil and military air base squawked a civilian IFF code so the weapons officer moved his cursor to a position over the airfield and it locked on to the civilian airliner... and F-14 also was getting ready for takeoff and also squawked an IFF code of a different nature... not being a civilian aircraft of course. The civilian plane took off and the visible cursor on the radar automatically tracked the aircraft... the civilian Airbus that was climbing and flying on its standard civilian flight corridor as normal.

The problem was the actual cursor was still actually on the air base and not where it was shown on the screen so while the cursor was following the civilian airliner the actual IFF data it was displaying was for an aircraft on the base which was assumed to be an F-14.

The result was that they saw what they thought was a non civilian aircraft closing in on them... they claimed just after the event that the plane was performing a diving attack on them and they had to fire, but all tapes and recordings show a steady climb to normal flight altitude for a civlian jet in the civilian flight corridor for the region.

The captain and weapons officer got medals for performance in the line of duty... the people they murdered got the bare minimum in compensation if any at all.

I seem to remember something like 6 million dollars in total for almost 300 passengers and crew...

Of course the cost was actually rather greater than that, but was paid a few years later in Lockerbie where 270 people die in the aircraft and on the ground... but then those people got 2.7 billion in compensation... about 10 million dollars each... though whether they actually received that is up for question... it shows the value of life depends on your passport... 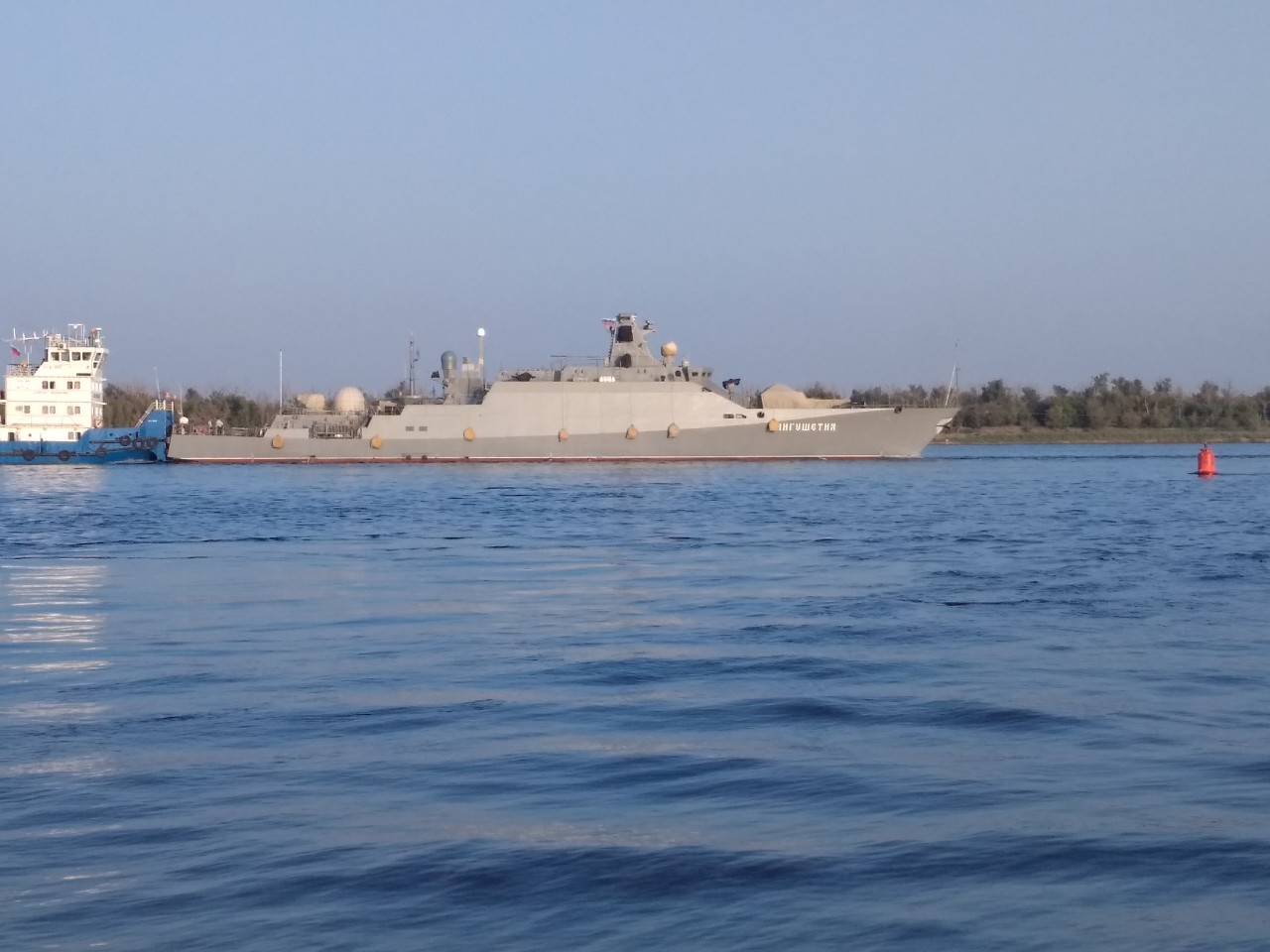 Pics of the Baltic fleet Buyans from a Dutch chopper. 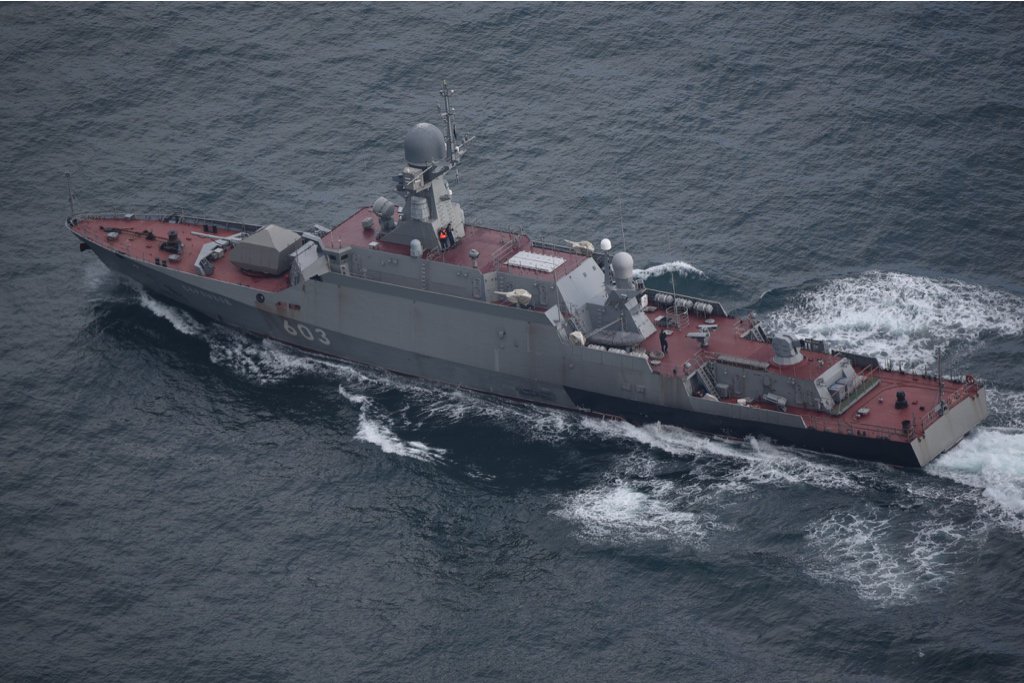 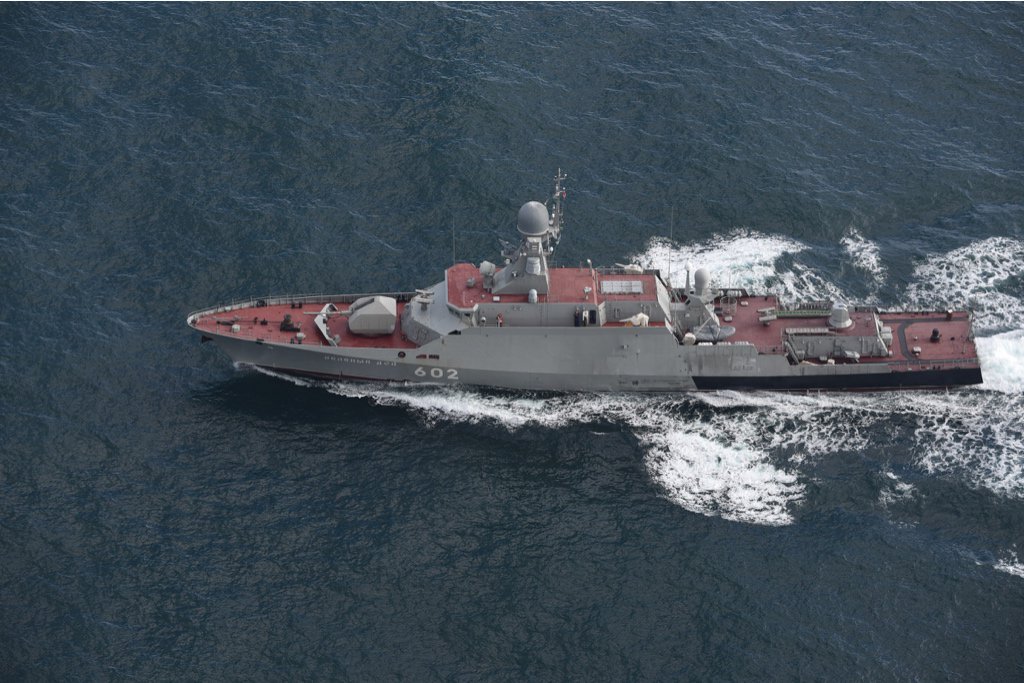 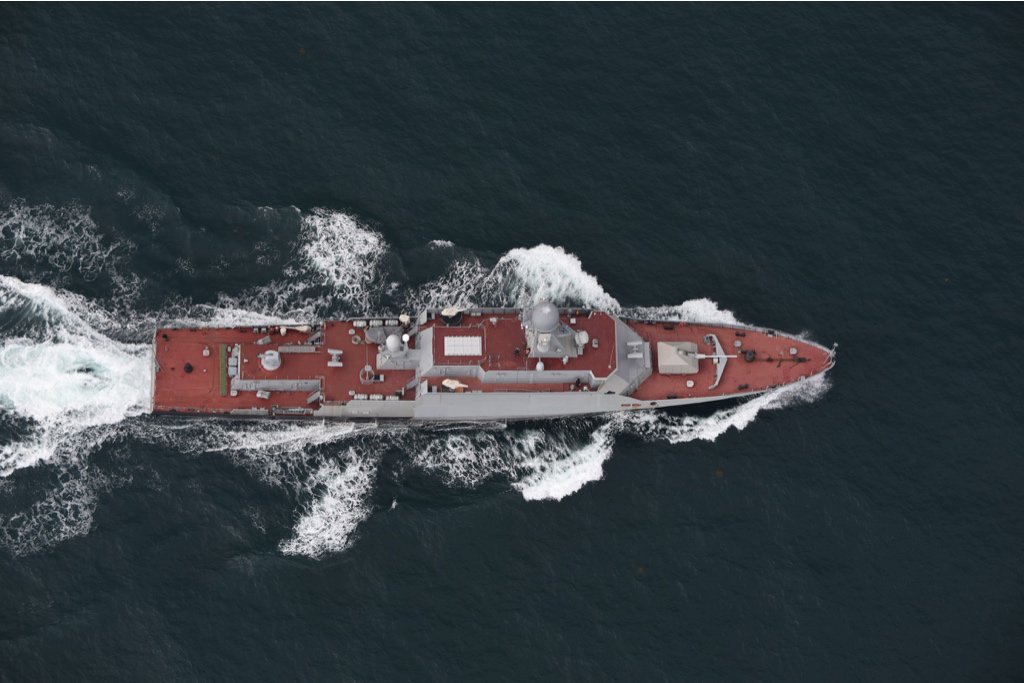 hoom wrote:Next Buyan-M Ingushetia is on its way downstream to Black Sea

Must have set out a while ago, apparently this is going through Rostov 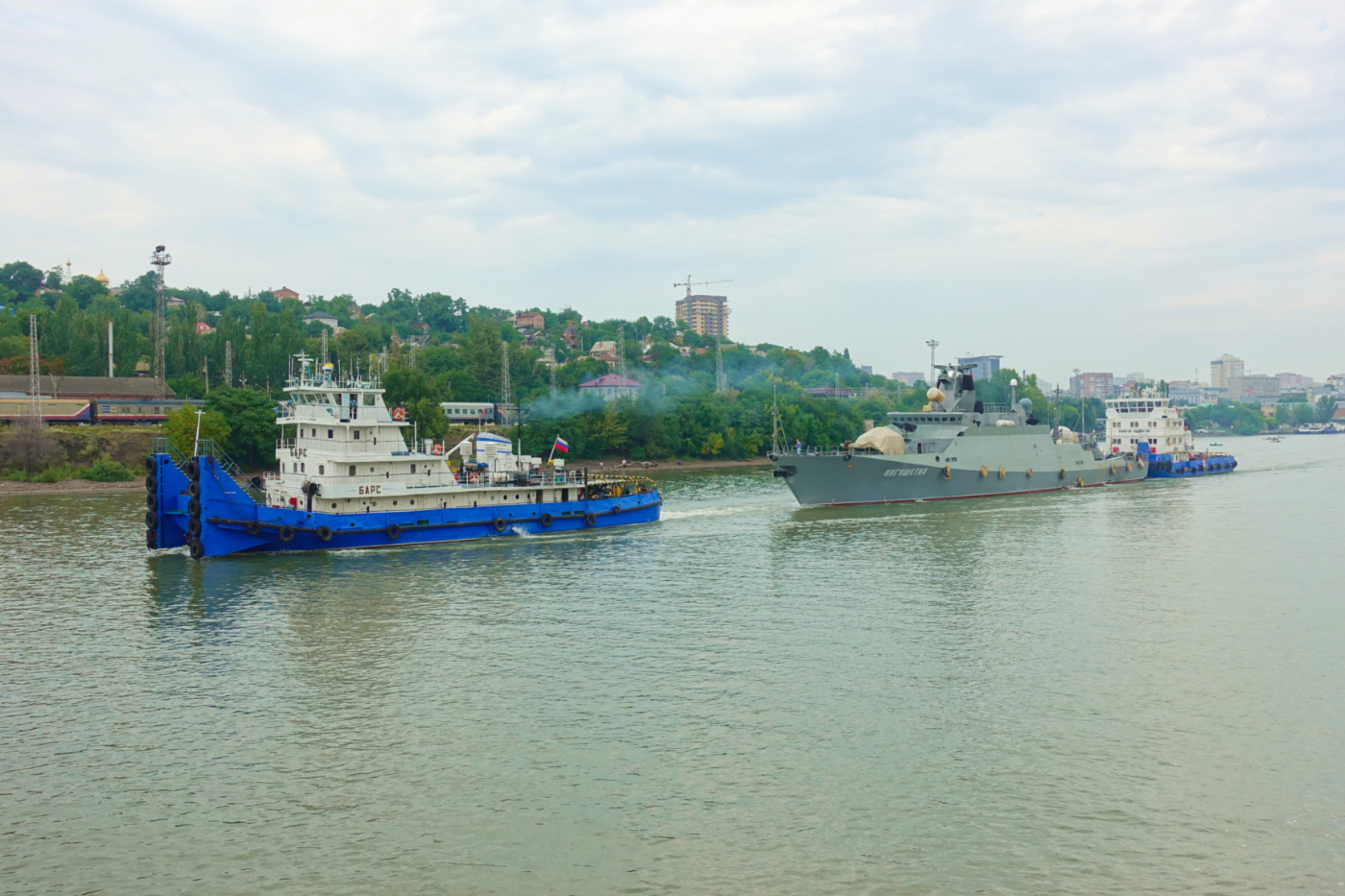 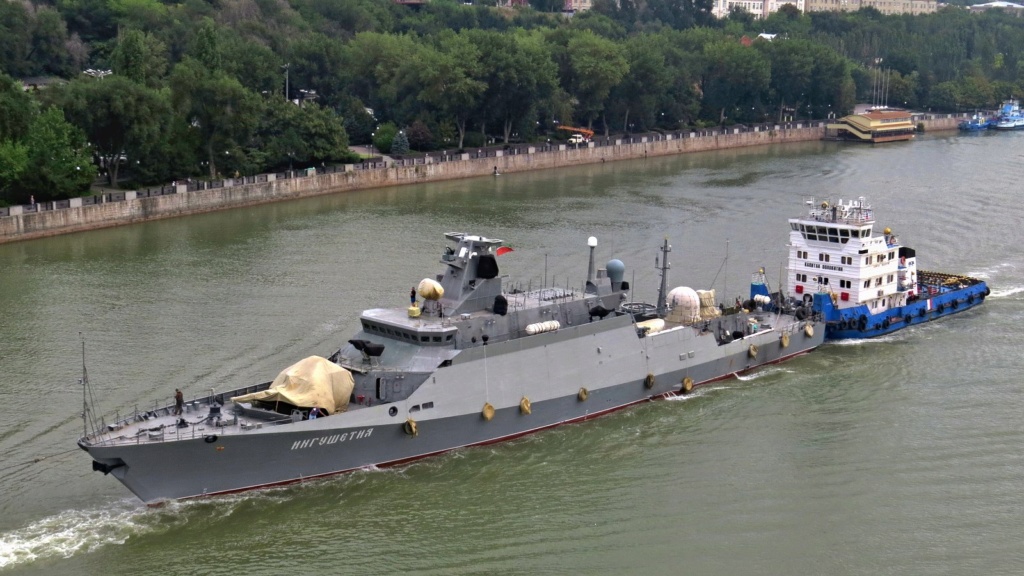 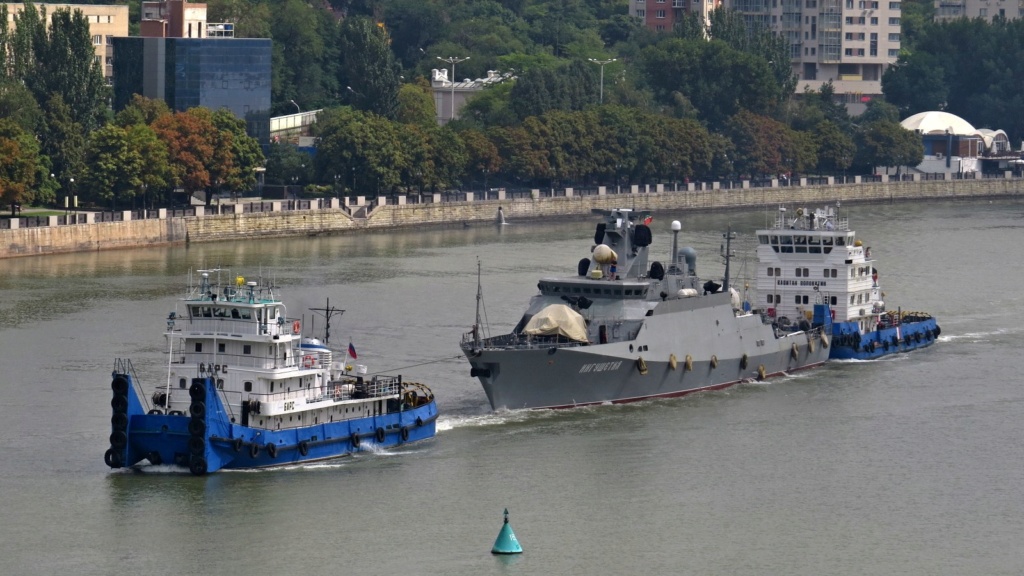 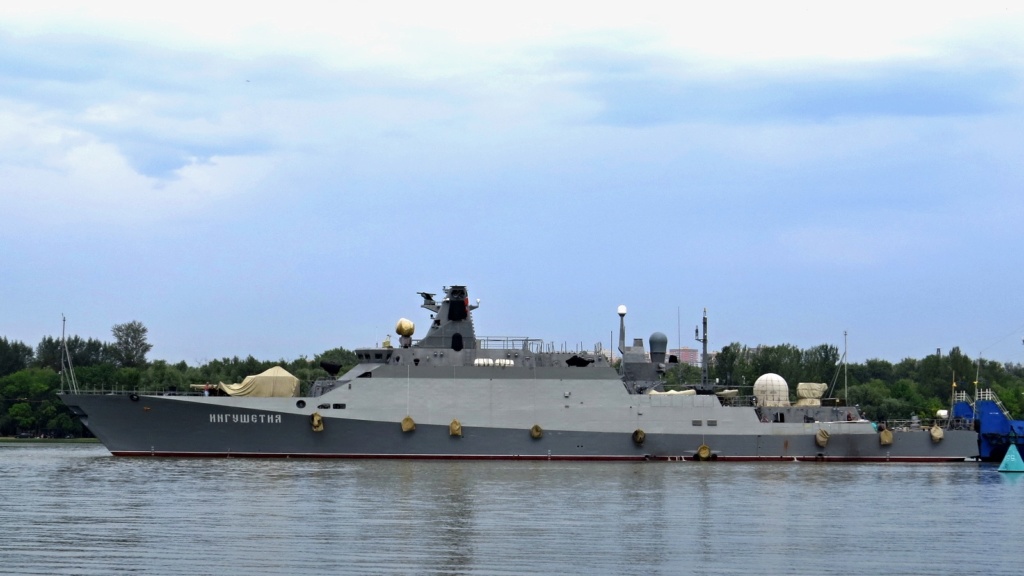 Zelenodolsk plant is developing a modernized version of the Buyan-M small missile ship, the company's general director Alexander Karpov told reporters.
" We are working on project 21631M2. This is about the same small missile ship, only with a greater displacement and greater firepower. I hope that in 3-4 years we will receive this project for the plant," Karpov said.

Thats a weird development.
There is already supposed to be Pantsir-M on the last several, what else might they add?

Redut & some form of AESA?
Sonar & torps?
Another UKSK module or two?
Or some combo.
GarryB

Now that they have some operational experience with them they can make more informed changes in their design... maybe make them bigger to increase storage and endurance, and improved weapon outfit and sensors would make sense too.
Rodion_Romanovic

Now that they have some operational experience with them they can make more informed changes in their design... maybe make them bigger to increase storage and endurance, and improved weapon outfit and sensors would make sense too.

Furthermore I see them as a complement and not alternative to karakurts, as the 22800 have a higher draft and better seaworthiness in open sea, while the 21631 are very good sea/river ships, perfect to operate in and out the russian internal waters.

A larger 21631M2 can be also a good replacement for the gepard light frigate/corvette as the flag ship of the caspian flotilla.
Isos

I bet on tor missiles.

Speaking at the launching ceremony on June 11, 2019 in Zelenodolsk of the Ingushetia MRC, the head of the shipbuilding department of the Russian Navy, Rear Admiral Vladimir Tryapichnikov, expressed the hope that the construction of modernized ships of project 21631 will begin in 2024.

George1 wrote:.... Rear Admiral Vladimir Tryapichnikov, expressed the hope that the construction of modernized ships of project 21631 will begin in 2024....

It's probably just wishful thinking. I think the series will end on 12.
Isos

Or stop building them. Ground kalibr launcher wiĺl be as good as a buyan. Focus on more Steregoushchy and ASuW corvettes.
william.boutros

Or stop building them. Ground kalibr launcher wiĺl be as good as a buyan. Focus on more Steregoushchy and ASuW corvettes.

Best to focus around Gorskov and Gorshkov M size. Their rate of production needs to significantly improve.
GarryB

I don't disagree that more missile tubes makes them more capable, but for coastal use and a lot of non-WWIII use... which will hopefully be all its service life a bigger gun often makes more sense and it is cheaper to use and becoming more capable and versatile.

New land based 57mm guided shell technology can be adapted to larger calibres more easily than to smaller calibres...

Once you get it into a 100mm calibre then scaling it up is easy for 125mm and 152mm and larger calibres too.

Of course their planned future seems to be replacing Redut with UKSK-M so for a small vessel having two UKSKs and two Redut launchers, it could instead have four UKSK-M launchers and would probably carry more SAMs unless a specific mission is expected.


Or stop building them. Ground kalibr launcher wiĺl be as good as a buyan. Focus on more Steregoushchy and ASuW corvettes.

Keep in mind these are multipurpose vessels... most of the time their UKSK launchers will carry (with two UKSK launchers and a total of 16 tubes available) probably 5 Club supersonic anti ship missiles, and maybe 5 Zircon anti ship missiles and probably 6 Club anti sub ballistic rockets to deliver torpedoes, or some mixture of the three main missiles. It will only rarely be used for Syria type missions because it really doesn't have the capacity to hit multiple threats and targets, whereas a larger platform does... sending it out armed only with land attack Kalibres makes it vulnerable to enemy ship and sub attack... and most of its normal life will be spent looking for enemy ships and subs.

Right now being a platform that has Kalibres makes it useful but when the Kirov class get their upgrades with 80 missiles each or perhaps more then they will become first choice for that sort of role.

Note that UKSK-M could be used on the kirovs too, so the front deck which previously had a mix of Vulcan anti ship missiles, Rif SAMs, and also the SS-N-14 anti sub anti ship dual purpose missile... the entire front could be replaced with UKSK-M launchers able to carry heavy cruise and ballistic missiles but also SAMs and anti sub missiles too.
medo

Buyan-M is sea-river class corvette with low draught. Russia have to protect three closed seas, Baltic, Black Sea and Caspian sea. Entries to Baltic and Black sea are not in Russian hands and sailing around Europe continent is sailing around hostile continent. Buyans could sail through internal rivers and canals and they could increase the numbers of ships in the sea, where they are needed without sailing through hostile waters. Buyans are not meant to sail in open ocean, but to protect Russian coasts and rivers.
GarryB

GarryB wrote:I don't disagree that more missile tubes makes them more capable, but for coastal use

Each one of those technologies involves different companies which also involves at least a hundred of high skilled engineers for each system.

Other countries develop their own systems like China, india, south korea or south africa. But they often ask for foreign help or try to copy existing systems. Wheb you don't have the industry for creating such systems you mostly try with short/medium range systems (because they are cheaper) and look for help from other countries.
jhelb

Isos wrote:Other countries develop their own systems like China, india, south korea or south africa. But they often ask for foreign help or try to copy existing systems.

Isos wrote:Other countries develop their own systems like China, india, south korea or south africa. But they often ask for foreign help or try to copy existing systems.

They probably have techs like radars, rocket boosters, data links.

I don't know all the details but for exemple south korea asked help from russia for their own S-350 system. South africa offers naval missile Umkhonto but it is a rather small range missile with a french radar from Thales for the ship variant. India is struggling to develop an analogue system of old soviet SA-6 and seak help from israel for the barack 8. China develops its copies of tor, buk, s-300 but still buys s-400 because they can't make a newer system worth something. They proved they can only copy. And now they asked russia help for their ABM program. Their industry can't make something by themselves from 0. They need a basis to start from (that's why they buy russians systems.

They have the industry but not as developed as russian, french or US ones. It's an expensive and heavy industry.
Sponsored content