28th October is the Greek celebration for the begining of the WW2 in Greece attacked by fascist of Italy
There is celebrations in every place.
Spetses is an Island where Bouboulina was close associate with Russian admirals Orlofs as she had a large comercial fleet turned to war ships after the Greek revolution 1821 against the Turks. There are still relatives of Orlof in the Island. 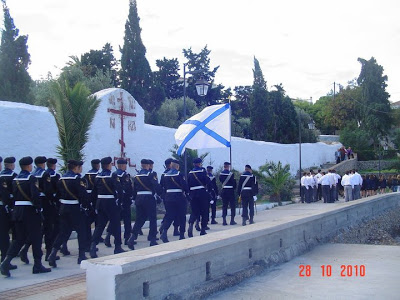 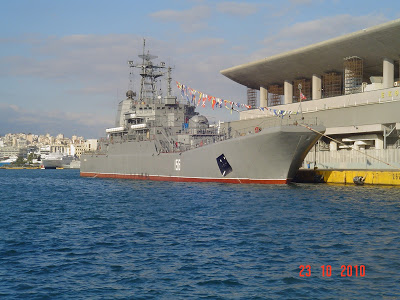 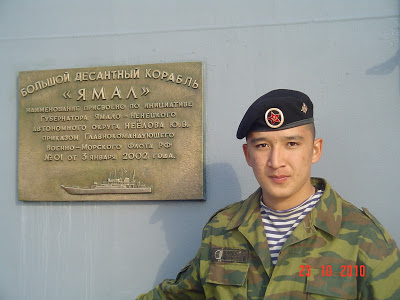 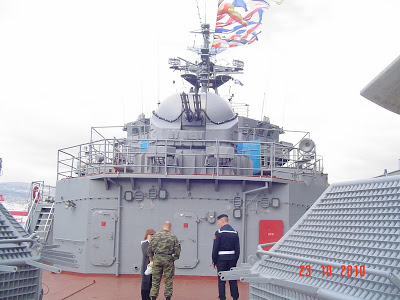 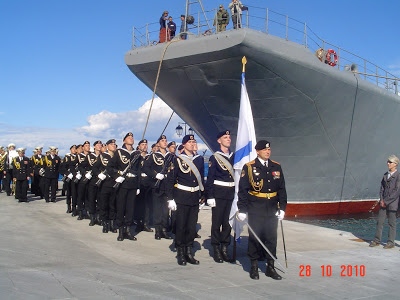 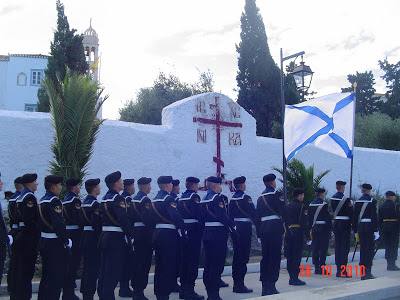 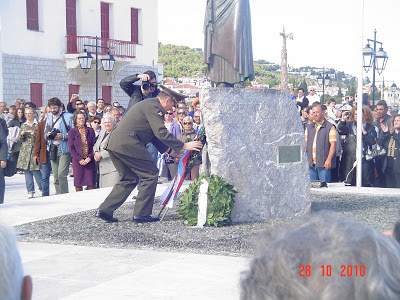 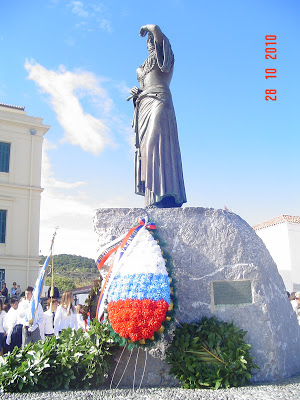 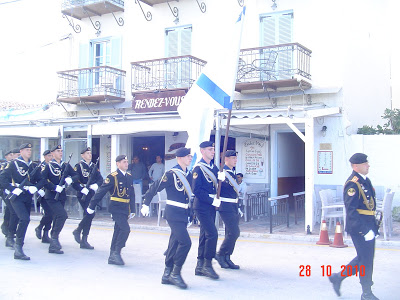 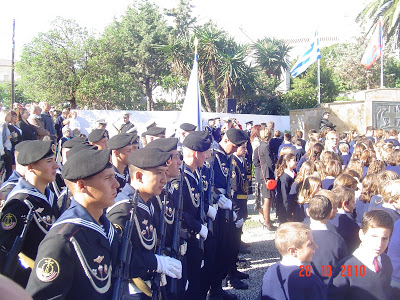 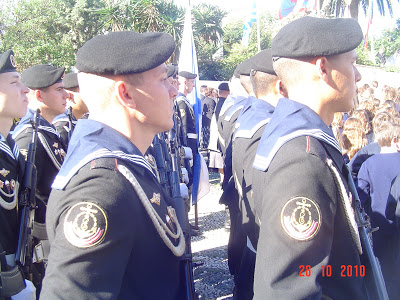 MOSCOW, September 7. /TASS/. Russian president’s press secretary Dmitry Peskov said on Monday it is too early provide any comment on the United States’ request to Greece to close its air space for Russian aircraft making humanitarian flights to Syria.

"There was a corresponding statement by our Greek partners who said they were considering this request," the Kremlin spokesman said. "It is too early to speak about that until we have any reaction."

Earlier on Monday, the Greek Foreign Ministry confirmed reports that the country had received a request from the United States to close its air space for Russian aircraft making flights to Syria with humanitarian cargoes.
arpakola

ATHENS, May 27. /TASS/. Russia’s oil major Rosneft and Greece’s Hellenic Petroleum have signed an agreement on key terms of supplies of oil and oil products to Greece.

The signing ceremony was held after the talks between Russian President Vladimir Putin and Greek Prime Minister Alexis Tsipras and in their presence.

Apart from that, the sides signed a number of other documents.

The agreement will bring cooperation with the Greek partners to a new level as it lays the basis for direct contracts with Hellenic Petroleum on supplies of oil and oil products to Greek refineries, Rosneft said in a release. Apart from that, the agreement gives Rosneft a possibility to realize oil products manufactured at Hellenic Petroleum’s oil refineries for bunkering and trading.

The agreement will make it possible for Rosneft to raise economic efficiency of sales of oil and oil products and offer its partner more attractive prices and flexible supplies formats.

"These agreements open up wide perspectives for further development of cooperation with Hellenic Petroleum," Rosneft President Igor Sechin said. "Along with creating an extra channel of product sales, potential direct contracts will help us strengthen positions of Rosneft’s trading division. The Greek partners, in turn, will have a guaranteed channel of supplies of high-quality energy sources at competitive prices."

Hellenic Petroleum is one of Greece’s biggest corporations. Aggregate capacity of its plants in Greece (in Aspropyrgos, Eleusis and Thessaloniki) is 17 million tons, or about 65% of the country’s entire oil refining output.

Imported oil accounts for 100% of Greece’s consumption. The country however exports oil products (15.5 million tons of exports and 3.6 million tons of imports in 2014, according to Erostat) thanks to a diversified oil refinery system, primarily at Hellenic Petroleum facilities. Thus, direct contacts with that company will help Rosneft enhance its positions on international markets.

Russian President Vladimir Putin hopes that Russian-Greek relations will not depend on time-serving trends in domestic politics and the projects that have been agreed on during the ongoing visit will be implemented.

"I’m pleased to say that in Russia and Greece the question of developing interstate ties has acquired a supra-political nature and is independent of current political trends," Putin said at a meeting with the leader of the country’s largest oppositional conservative party New Democracy Kyriakos Mitsotakis. Putin recalled that other members of the Mitsotakis family were prominent Greek politicians and they invariably contributed to the development of Russian-Greek relations.

"Today’s visit was very successful and business-like; we agreed on many things with the prime minister and had a good, meaningful conversation with the president," Putin said. "We do hope that the representatives of your party in parliament will support today’s initiatives of yours and promote the development of Russian-Greek ties in every way."

Mitsotakis said for his part that when his party was in power in 2004-2009, it accomplished a great deal for the sake of wider bilateral relations.

"Our countries are linked by tight bonds based on common traditions, and I believe it is important we have intra-party agreements. Personally I am very interested in the further buildup of economic relations," he added.

Over the centuries, the same faith and mutual affection have been uniting the Greeks and Russians and helping them to overcome and beat difficulties, Putin said

ATHOS (Greece), May 28. /TASS/. Russia will strengthen ties with Greece and Holy Mount Athos while "spiritual kinship and trust will be determining the nature of our traditionally close and friendly relations in the future," Russian President Vladimir Putin said at a meeting with members of Holy Kinot (Athos’ governing body) on Saturday.

Over the centuries, the same faith and mutual affection have been uniting the Greeks and Russians and helping them to overcome and beat difficulties, Putin said.

"It was evident during liberation movements in the Balkans and in any other stages of the world’s history," he said. "These are very deep feelings inherited in full by new generations of our citizens."

"Relics brought to our country from Athos for worshipping proved to showcase growing ties between Russia and Athos," he said, mentioning the Belt of the Virgin Mary relic from the Vatopedi Monastery and the right hand St. George’s from the Xenophon Monastery.

"Hundreds of thousands of Russian Orthodox believers could venerate them," Putin said. "We hope that high, sublime mission of Athos and Athonite monasteries will be continued," he said, pointing out that each man who put his foot on the holy land of Athos was feeling something special.

"It is a unique hearth of Orthodox Christianity and Christianity," Putin said. "Over 1,000 years spiritual traditions and the values we share have been gently cherished and multiplied here."

Along with this, the Russian president said that Athos’ role was crucial "when Orthodox Christianity in Russia and in other confessing it countries has consolidated."

"Through consolidation, Eastern Orthodoxy enables a huge number of people - with people living on our country, Russia, as well - to gain internal support," he said. "And the first written reference to Russians on the holy mountain goes back as long as one thousand years ago, which underlines again importance of this particular place for the present-day Russia."

Orthodox Christians were drawing spiritual knowledge and strength from Athos, he said.

"Now when reviving values of patriotism, historic memory and traditional culture, we have in mind closer ties with Athos. A year-on-year rise in the number of Russian pilgrims, exceeding 11,000 people a year, is an encouraging fact," Putin said thanking the clergy for their hospitality and good attitude to Russians at Athos.
submit to reddit

With the Marxist and atheist government of Greece there is no chance for better relations. Tsipras prefer Turkey over Russia any day.
arpakola