Anyone smell a rat? Look at the small price difference compared to the risk of going to a non Bulgarian, especially a Ukrainian, company. Remember the scandal after their last refurb attempt?

So Ukraine has a big stock of Mig-29 parts

As the Bulgarian magazine "Aero" in the publication of the Ukrainian company has dostawa parts for the MiG-29, the Ministry of defence of Bulgaria chose GK GHVIP "Ukrinmash" (part of GP "Ukroboronprom") as the winner in the open tender announced on 15 April 2016. Under the contract the Ukrainian company is to supply to the customer a set of spare parts for the MiG-29. The contract amount is 4066266 leva (2,348 million dollars). In second place in the list of bids was the Bulgarian company Armar Corporation General Technical Cooperation Ltd, which bid 4148186 leva (2,395 million dollars). The contract with the winner should be signed in September or early October 2016.

According to tender terms, the winner must supply new and used spare parts and consumables for continued airworthiness fleet of MiG-29 fighters. Protocol of negotiations between the "Ukrinmash" and the Bulgarian military contains some interesting details. One of the questions addresses the issue of how Ukrainian supplier can prove that the exported to Bulgaria spare parts are new and unused. The answer lies in the fact that the spare parts are new, and this will be confirmed by the necessary accompanying documents (passports and certificates).
George1

Antonov rolled out the new An-132D multipurpose turboprop transport on 20 December in Kiev, Ukraine, as the Saudia Arabia-backed project prepares to enter the flight test phase.

The roll-out of demonstrator comes about two years after Antonov launched the project, which updates the 40-year-old An-32 design with Honeywell avionics, Pratt & Whitney Canada PW150A engines and other improvements.

Assembly of the first aircraft is in Ukraine, but series manufacturing will transition to Riyadh, with the involvement of Taqnia Aeronautics and the King Abdulaziz City for Science and Technology. The Kingdom owns a 50% share of the intellectual property invested in the design of the An-132.

The An-132 is designed to carry up to 8t of cargo at altitudes up to 28,000ft. It comes equipped a suite of updated technologies, including Dowty propellers and a Liebherr air management system.

The development programme has helped Antonov survive amidst the conflict between Ukraine and Russia, the company’s former biggest customer and still a major supplier. Attending the event in Kiev included leaders of both countries involved in the An-132D programme — Ukraine president Petro Poroshenko and Saudi Arabia’s prince Turki Saud Mohammed Al Saud.

For Saudia Arabia, the programme is part of a larger effort to develop an indigenous aerospace industry ranging from supply parts to assembly aircraft.

The first flight of the An-132D

March 31, 2017 from the Kiev airport Svyatoshin made the first flight of the demonstrator An-132D (registration number UR-EXK, serial number 001) development of the Ukrainian state enterprise Antonov. Upon completion of the flight, the aircraft landed at the Kyiv-Antonov aerodrome in Gostomel.

The two governments plan to participate on the "modernization, but also construction of new helicopters from the design phase to their production," Kubiv, who also serves as Ukraine’s minister of economic development and trade, told local business daily Dziennik Gazeta Prawna in an interview.

According to Kubiv, the Ukrainian defense industry is not capable of developing new helos on its own, and it needs to cooperate with industry players from Poland and potentially companies from other Western nations.

"We can develop this branch only in cooperation, also with Poland. I cannot rule out that European and Northern American companies will join this [project],” Kubiv said. "Taking part in modernizing aircraft and helicopters on the global markets is one of Ukraine’s ambitions."

The latest announcement follows earlier statements by a senior Polish politician. In late 2016, Polish Defense Minister Antoni Macierewicz said Warsaw and Kiev are discussing plans to launch a joint production effort of helos that could be used by the militaries of Central and Eastern European allies.

A number of countries in the region are planning to purchase new helicopters to replace their Soviet-designed helos. Most recently, Lithuanian Deputy Defense Minister Giedrimas Jeglinskas announced that the country may purchase new transport helicopters to completely replace its fleet after 2020. 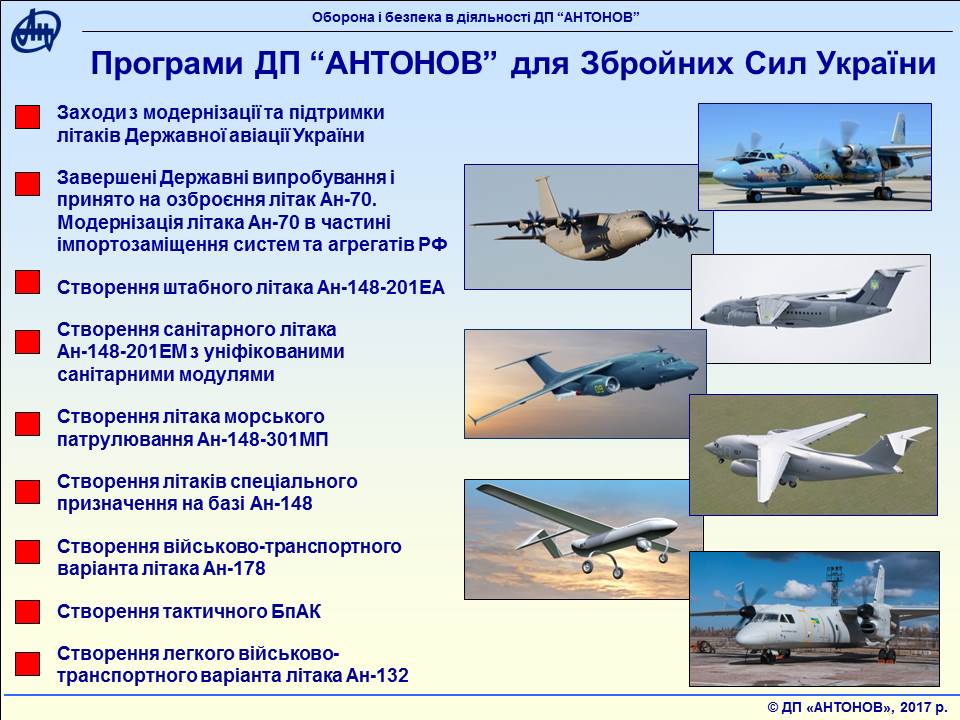 The end of an era. It is not clear exactly what is being sold off. Does it include ownership of all their designs?

The Cabinet of Ministers of Ukraine abolished the state aircraft building concern "Antonov", according to the government decree of July 19, 2017 No. 546. The Cabinet ordered the creation of a Commission for liquidation of the concern.

"To approve the Chairman of the Commission Deputy Minister of economic development and trade Brovchenko Yuri Petrovich," – said in the text of the resolution.

The government instructed the head of the Commission within two months to submit the claims of creditors.

Also Brovchenko shall provide the Cabinet of the liquidation balance sheet of the group within three months.

In may 2015, the Cabinet of Ministers of Ukraine passed the state enterprise "Antonov" state aircraft concern "Antonov" in the state concern "Ukroboronprom".

Antonov company is a world leader in transport aircraft. The company is cooperating with the 76 countries of the world.

2008 Antonov company is a part of the SJC "Antonov". The SAC also includes the Kharkiv state aviation production enterprise and the state enterprise "plant 410 civil aviation".

They weren't producing anything but there was still some semblance of prestige tied to that name. Wow...

So does this mean that someone can acquire brand name now?
d_taddei2

Another link to this

Looks like there could be a very unhappy Chinaman somewhere.

The Kyiv Shevchenkivsky District Court on the motion of the Security Service of Ukraine (SBU) on September 7 passed a decision to arrest 41,00087% of shares in PJSC Motor-Sich (Zaporizhia) owned by five offshore companies that are on the accounts of Dragon Capital custodian (Kyiv) in connection with suspicions of an attempt to withdraw the assets of the enterprise from Ukraine, which will lead to its liquidation.

"The pre-trial investigation established that since 2016 until the present time unidentified persons from among the incumbent and former officials and ultimate beneficial owners of Motor Sich, acting on a preliminary conspiracy to weaken the state by destroying the said enterprise, have carried out a number of transactions to sell the controlling stake in the company to foreign companies that intend to move the company's assets and production capacity outside Ukraine, which will lead to its liquidation and destruction," the document reads.

According to the report, the Antimonopoly Committee of Ukraine in early June this year received a statement from the owner of the Chinese company Beijing Skyrizon Aviation Industry Investment Co., Ltd. and Motor Sich on granting a permit for concentration, according to which this Chinese citizen through the controlled structures already owns the said 41.00087%.

[quote="PapaDragon"]Liquidating Antonov? Just like that?  ..
So does this mean that someone can acquire brand name now?/quote]

No, it will be part of larger entity. Russia gained in 2 ways: if they start doing mods on their ANs the dead Antonov can't sue, & her aviation plants get more business in "import substituting":  https://inforeactor.ru/95324-likvidaciya-ukrainskogo-antonova-poshla-vo-blago-rossiiskomu-aviapromu?utm_medium=internal&utm_source=inforeact_internal&utm_campaign=inforeact_internal&utm_term=1245878s14746&utm_content=5604684#
I wonder if the old AN-218 project could later be revived:
https://en.wikipedia.org/wiki/Antonov_An-218

AN-74 saga update: https://regnum.ru/news/economy/2345095.html
It's possible that the Ukroboronprom was given a lifeline &/ Ukraine is getting a $150M credit masked as such to buy arms she otherwise has no other way to pay for. If the AN-74 was in demand, there would be a big backlog of orders & no need for this $ injection.
Tsavo Lion

The news about its death were highly exaggerated! UAE is investing in the An-77 project: http://www.defenseworld.net/news/21317/Ukraine___Middle_East_Country__to_Develop_An_77_Transport_Aircraft_Based_on_An_70#.WhS1glWnGUk 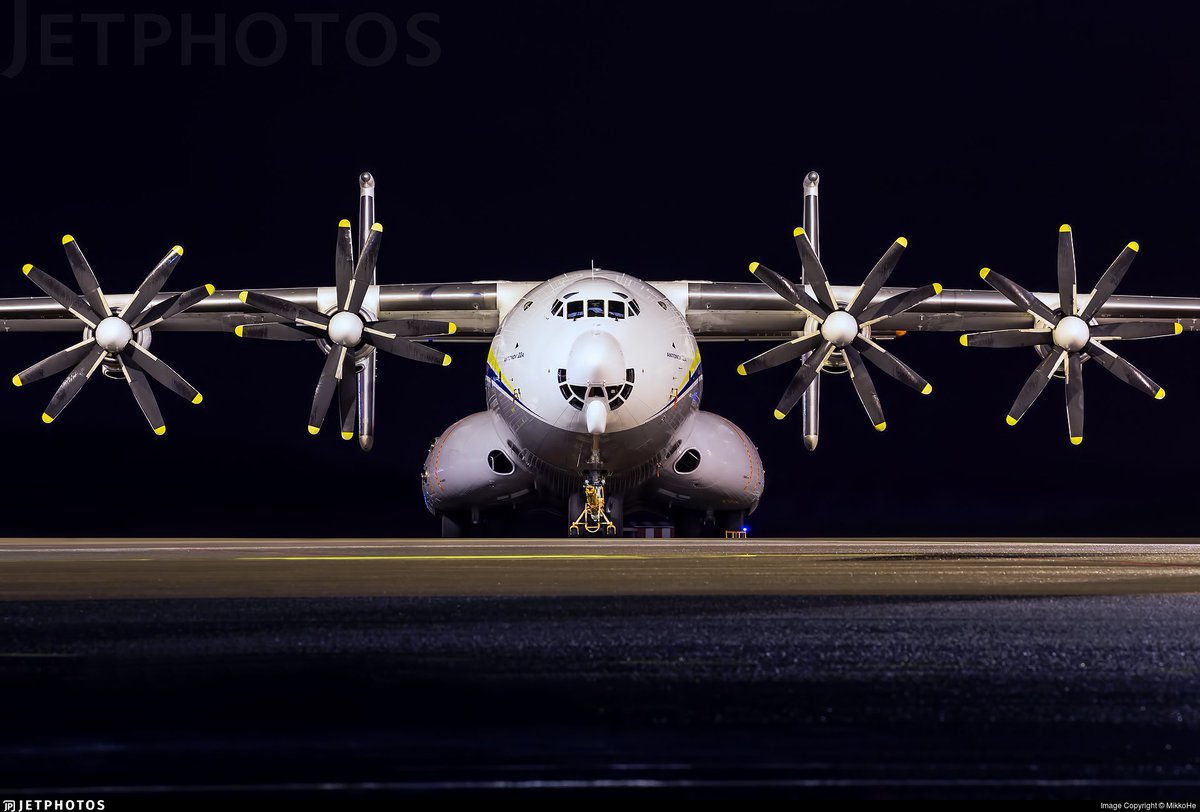 China to build monsters of the sky with Ukraine company
http://www.atimes.com/article/china-build-monsters-sky-ukraine-company/

Meanwhile, https://www.reuters.com/article/us-bulgaria-defence-airplane/Bulgaria-asks-Russia-to-overhaul-mig-fighter-jets
I guess they don't trust Ukraine that much!
George1 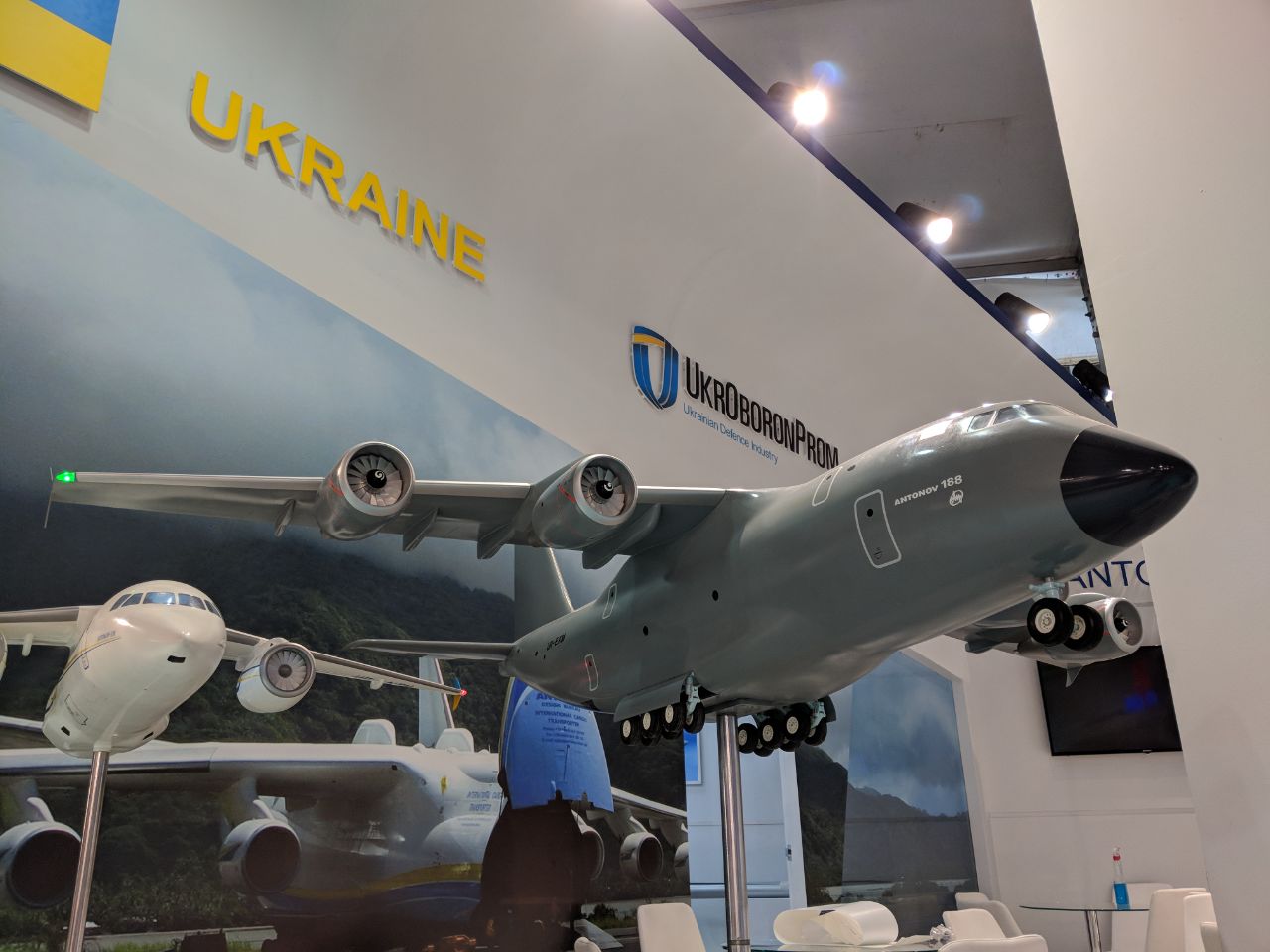 No official confirmations so far, but Turkey reportedly is now participating:
http://uprom.info/news/avia/dp-antonov-na-vistavtsi-u-turechchini-predstaviv-proekt-novogo-litaka-an-188-foto/
https://www.5.ua/suspilstvo/povitriane-shou-evrazii-v-antalii-ukraintsi-prezentuvaly-proekt-novitnoho-an188-168933.html

The 2 engine variants may also be revived:

"From the legal standpoint, Russia invested quite some money (in the Antonov-70 project) and it aspires to rights to about 50% of intellectual property in it," Kornev said. "That’s a serious contradiction. If truth be told, they don’t have the right to do it."
http://tass.com/economy/801944

An-188 became a "Ukrainian-Turkish aircraft", and An-77 will remain with D-27 engines

At the Eurasia Airshow 2018 air show in Antalya (Turkey), the Ukrainian state enterprise Antonov officially presented the Ukrainian-Turkish An-188 aircraft project, Ukrainian media reported with reference to the press release of the company's press service. 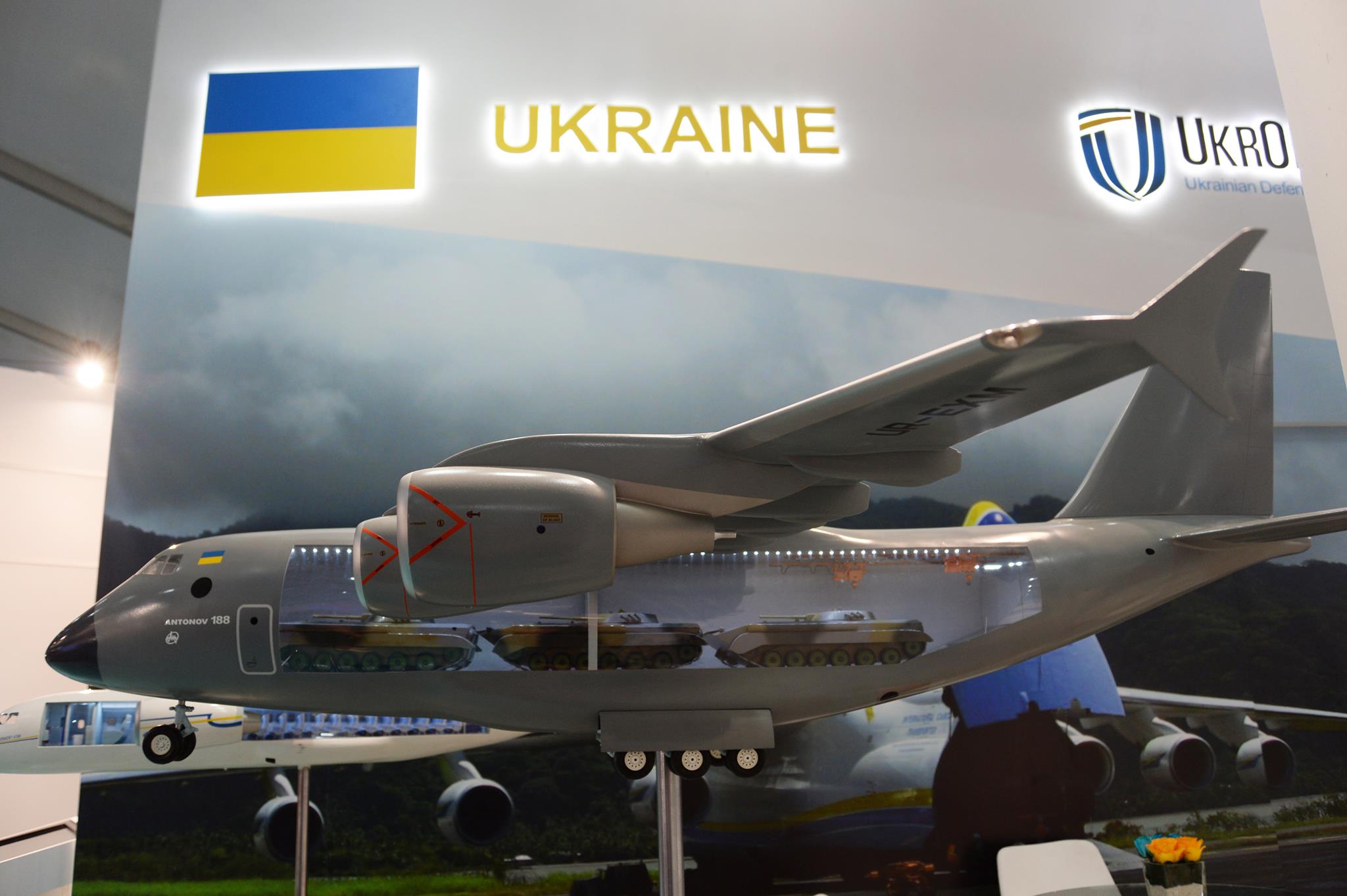 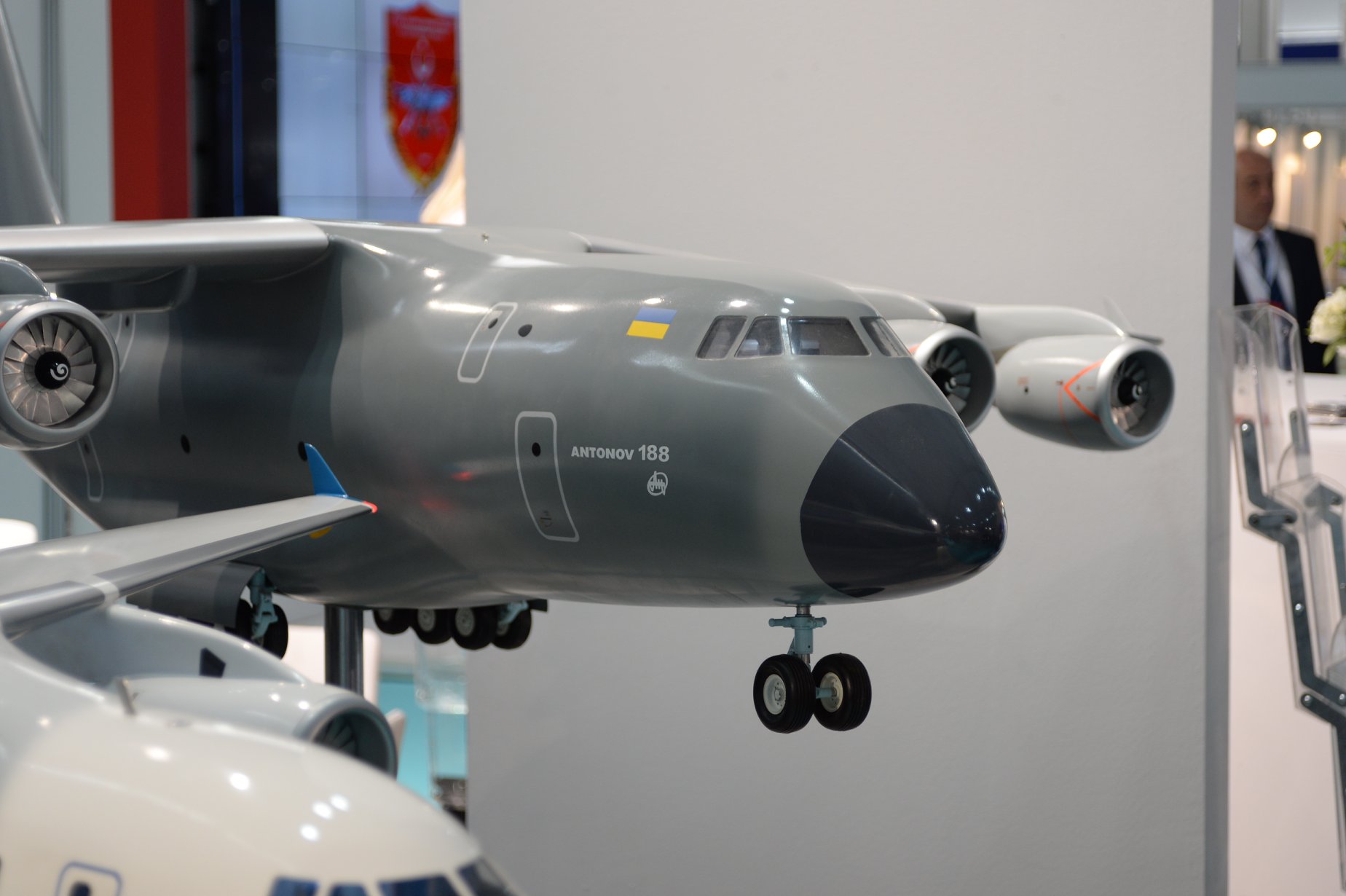 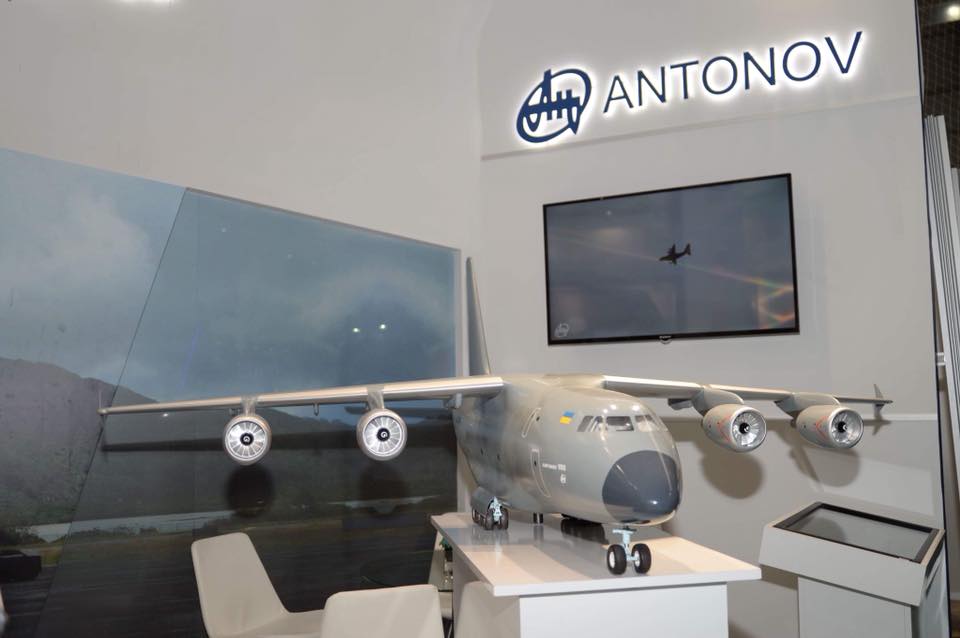 A couple years ago, AW&ST magazine announced that in not too distant future, there'll be 13 surplus A-400Ms on the market. So, Turkey is hedging her bets with the AN-188 in case the A-400M isn't "up to speed", embargoed, or too expensive to buy in large #s. They r now arming with Russian S-400s to become more independent of NATO. So, why not getting Ukrainian planes too?
JohninMK 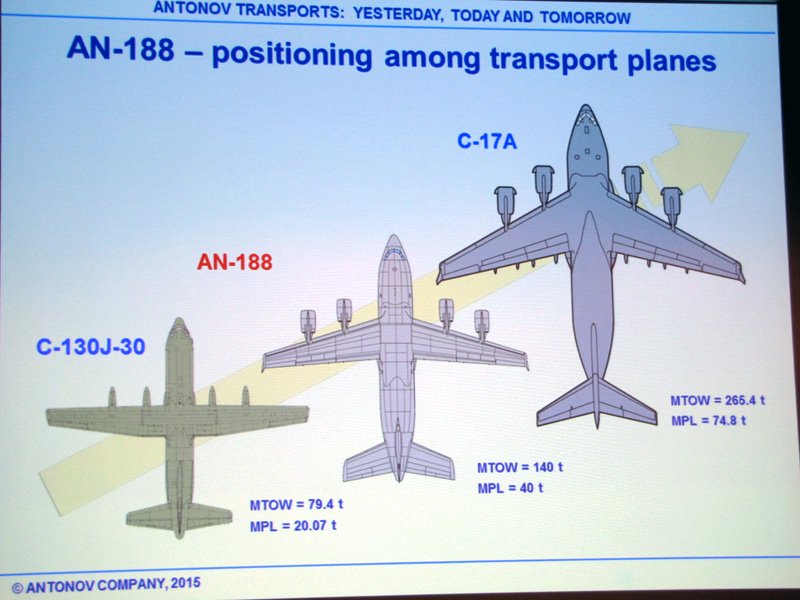 So this An-188 fanart will be Ukrainian equivalent of Shtorm-class supercarrier? Got it...

Don't compare apples with oranges! The An-70 is already flying, it's not a paper plan; An-188 will be based on it just like the IL-476 with different engines is based on the IL-76MD.
Turkey, Ukraine to start joint manufacturing of An-188 aircraft
https://en.trend.az/world/turkey/2894997.html

They r building up their military to help keeping the country together, not to mention being on a par with Greece, Israel, Saudi Arabia & Iran.
The last 2 r involved with Ukrainian aviation as well & may be interested in An-77/188 &/or its twin-engine variant.
GarryB

An IL-476 would carry more (62 tons) likely carry further and be rather cheaper... and it is already in production... but good luck to them... if the A400M turns out to be crap then it is a viable alternative... assuming it does not turn out to be crap too...
Sponsored content