Another article with a few details on what Egypt is buying among others:
http://www.defenceweb.co.za/index.php?option=com_content&view=article&id=43029:russian-confirms-egypt-as-north-african-buyer-of-50-mig-29s&catid=35:Aerospace&Itemid=107

Btw Garry, President-S must be for the Ka-52, don't remember reading anything about the MiG-35 having such a system (a DIRCM).

Lots of Vitaly photos at link

The GAZ Tigr is a Russian 4×4, multipurpose, all-terrain infantry mobility vehicle manufactured by GAZ, first delivered to the Russian Army in 2006. Primarily used by the Russian Federation’s armed forces, it is also used by numerous other countries and organizations.

The vehicles are deployed by the rapid-reaction teams and special forces for conducting escort missions, patrols and counter-terrorist operations.

The main differences of SBM VPK-233136 from basic variant GAZ Tigr: improved armor, no NBC protection system, embrasures in the windows, side windows couldn’t be opened, two hatches on the roof, tow rope on the roof, no oil tanks on the back, improved brakes system.

The Russian military reporter Vitaly Kuzmin made pictures outside and inside a special armored vehicle SBM VPK-233136 used by OSN Saturn special unit.

Btw Garry, President-S must be for the Ka-52, don't remember reading anything about the MiG-35 having such a system (a DIRCM).

There are versions of President for helos and for fixed wing aircraft... some can be added on, and some are built in. MiG-35 has it built in... older MiGs can have the add on, or be upgraded with the built in version. Su-35 also has a built in system, just like PAK FA does too... the latter is called Himalaya.
Book.

Egypt To Receive Advanced Fulcrum Fighters from MiG
by Vladimir Karnozov - June 7, 2016, 8:31 AM


An initial batch of Advanced Fulcrum lightweight multirole fighters for Egypt is in production at the Russian Aircraft Corporation “MiG” (RAC MiG), according to industry sources. The number on order and the exact type of aircraft is not yet known. A couple of aircraft are to be ready for flight tests by the year-end. Russian media reports have given a contract value of $2 billion.

Neither Moscow nor Cairo have revealed the status of the deal. This is mainly due to its complex nature, arranged by Egypt and Saudi Arabia with the latter granting funds under government-to-government agreements of a secret nature. Some details may emerge during the long expected—and repeatedly delayed—official visit of the Saudi monarch to Moscow. The kingdom is looking to improve its relations with Russia, using big arms purchases in political tradeoffs.

The aircraft could be MiG-29M/M2s or MiG-35s. Basically, these represent the same aircraft with minor technical differences. The designation “MiG-35” has been introduced largely for marketing reasons. RAC MiG is desperate to secure the Egyptian order; without it, production of the Advanced Fulcrum series may close down soon.

In 2011-2013, RAC MiG produced three prototypes of land-based Advanced Fulcrums. These are being employed on flight tests and as demonstrator aircraft. The Russian air force says it has an interest in the MiG-35, but this interest is yet to materialize as a firm order. The service made it clear that it will not place a contract earlier than in 2017, and only on the condition that the manufacturer meets its requirements for a future lightweight multirole fighter.

This year RAC MiG is supposed to deliver the last six MiG-29K/KUB carrier-capable Advanced Fulcrum fighters to India, from the 2010 order for 29 such aircraft. This will bring the Indian Navy fleet to 45. The manufacturer has already fulfilled the Russian MoD order for 20 MiG-29K and four MiG-29KUB deck fighters awarded in 2012. These aircraft are operated by the newly established independent fighter regiment of the Russian navy naval aviation headquartered at Yeisk airbase on the Russian Black Sea coast. This airbase is a large center for the combat training of naval pilots in operations from aircraft carriers using shore-based facilities equipped with arrestor wires and sky-jumps.

RAC MiG is still fulfilling a Russian air force order for for 16 MiG-29SMT/UBT classic Fulcrum aircraft. It came in 2014 and followed the 2009 contract for 34 such machines that are now in service. RAC MiG delivered four MiG-29SMT and two MiG-29UBT aircraft in 2015, and two more in early 2016. It has to deliver the remaining eight later this year. These are believed to be the very last classic Fulcrums to be built.

The aircraft could be MiG-29M/M2s or MiG-35s. Basically, these represent the same aircraft with minor technical differences. The designation “MiG-35” has been introduced largely for marketing reasons. RAC MiG is desperate to secure the Egyptian order; without it, production of the Advanced Fulcrum series may close down soon.

Dear god... the F-16A and F-16 block 52 are basically the same aircraft with minor technical differences...

The MiG-29M2 is an all digital fighter bomber, whose airframe is shared by the MiG-29K and MiG-35.

The MiG-35 is a 5- level jet with pretty much everything improved over the MiG-29M2, using avionics that are comparable with the Su-35 and in some areas superior to.

Its distributed optical sensor system is superior to that fitted to the Super Flanker... and was developed by a company that creates laser communications systems for satellites.

Missile boat P-32 will be transferred to Egypt in July 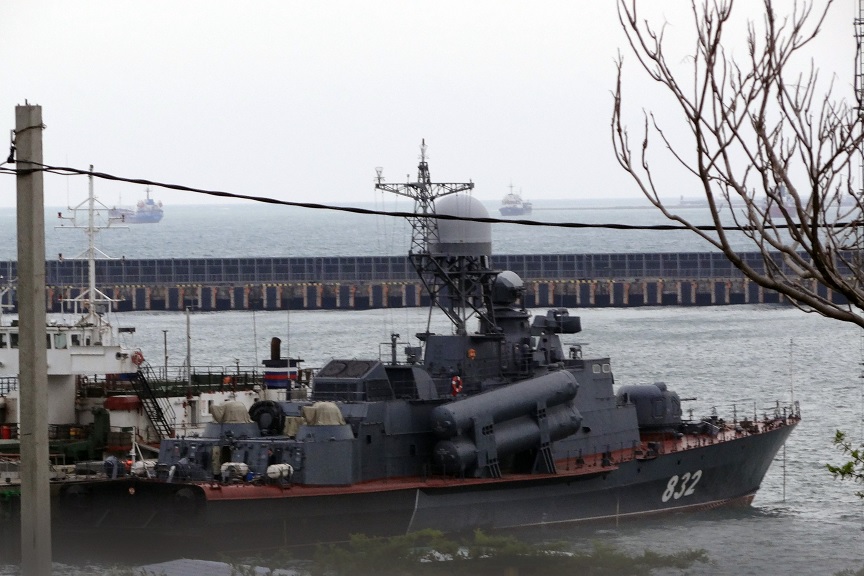 From this twitter page (graphic content warning!*), the following is claimed:
By the end 2016 Egypt will receive the last batch of the S-300VM order - so they received the S-300VM after all? How come nothing was made public, i was expecting images of them in EADF service since last year.
In 2017 Egypt is set to receive 6 MiG-35 and 6 Ka-52.
https://twitter.com/BTelawy

*i have never understood the grotesque fascination in ME to post images or dead/mutilated/eviscerated/charred people, even if the posters in question are not alligned (as far as i know) with jihadist scum like IS and other similar  filth.

Anatoly Punchuk, deputy director of the Russian Federal Service for Military-Technical Cooperation (FSMTC), said that FSMTC received n appeal from the Egyptian side for the supplies of shipborne Ka-52.

Anatoly Punchuk, deputy director of the Russian Federal Service for Military-Technical Cooperation (FSMTC), said that FSMTC received n appeal from the Egyptian side for the supplies of shipborne Ka-52.

Thought that they already had 46 or so on order. Maybe this is pressure to get more than the expected 6 next year.
mack8

Watch from the start, said to show egyptian S-300VM being built:

Assembled and tested the first Ka-52 for Egypt 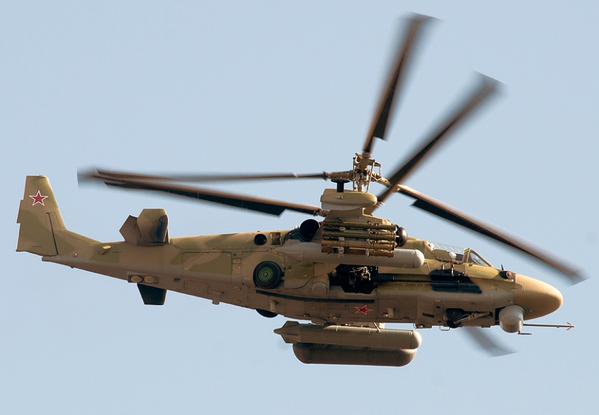 George1 wrote:Assembled and tested the first Ka-52 for Egypt

Do they have electronic warefare equipement against trophy system ? According to the tests of the US army they say trophy's radar is bad but the system managed to destroy incoming Kornets.

To a Tee: Russia to Fulfill MiG-29 Delivery Contract to Egypt on Schedule

"The delivery will be carried out within the period set out in the contract," Frolkin told reporters at the IDEX 2017 exhibition in the United Arab Emirates.

The contract, reportedly initiated after Russian President Vladimir Putin's meeting with Egyptian leadership in February 2014, would be the largest order for the MiG-29 jets in the post-Soviet period.

The contract on the delivery of some 50 MiG-29 Fulcrum multirole fighters reportedly sets the 2020 completion deadline.

"The delivery will be carried out within the period set out in the contract," Frolkin told reporters at the IDEX 2017 exhibition in the United Arab Emirates.

The contract, reportedly initiated after Russian President Vladimir Putin's meeting with Egyptian leadership in February 2014, would be the largest order for the MiG-29 jets in the post-Soviet period.

The contract on the delivery of some 50 MiG-29 Fulcrum multirole fighters reportedly sets the 2020 completion deadline.

One of the first Ka-52 helicopters for Egypt 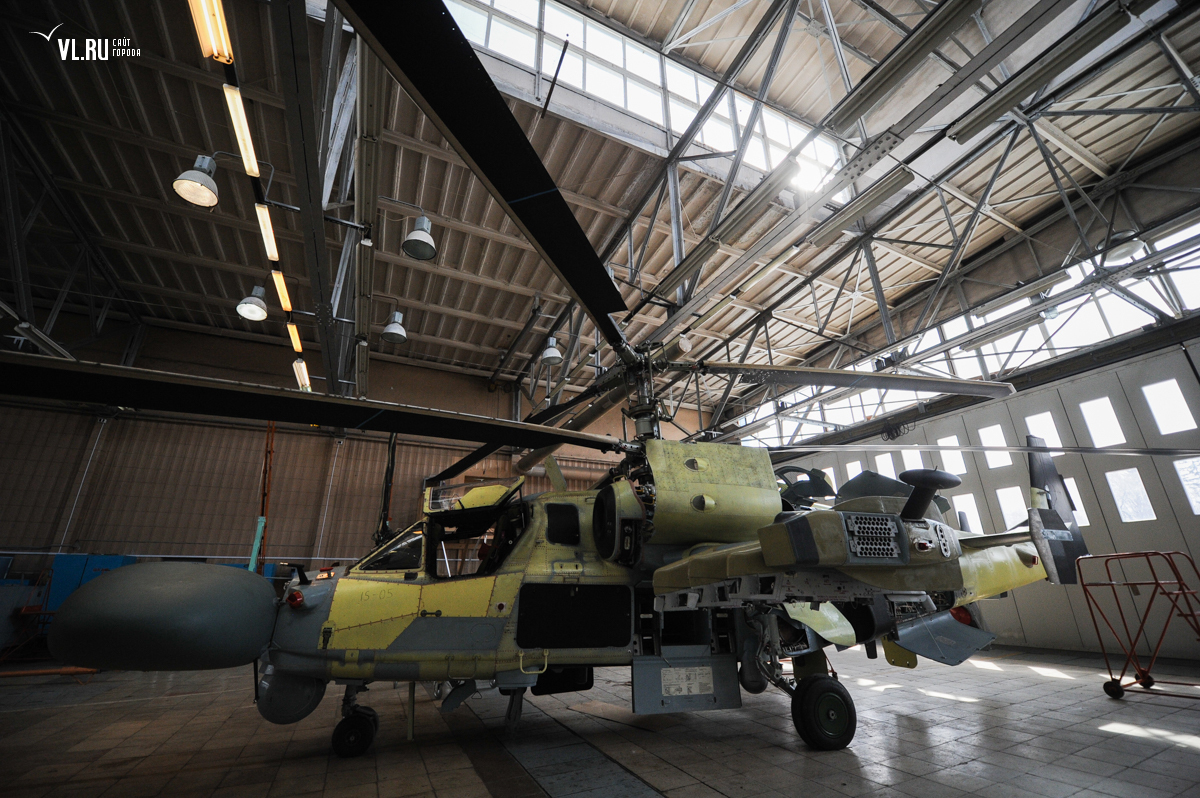 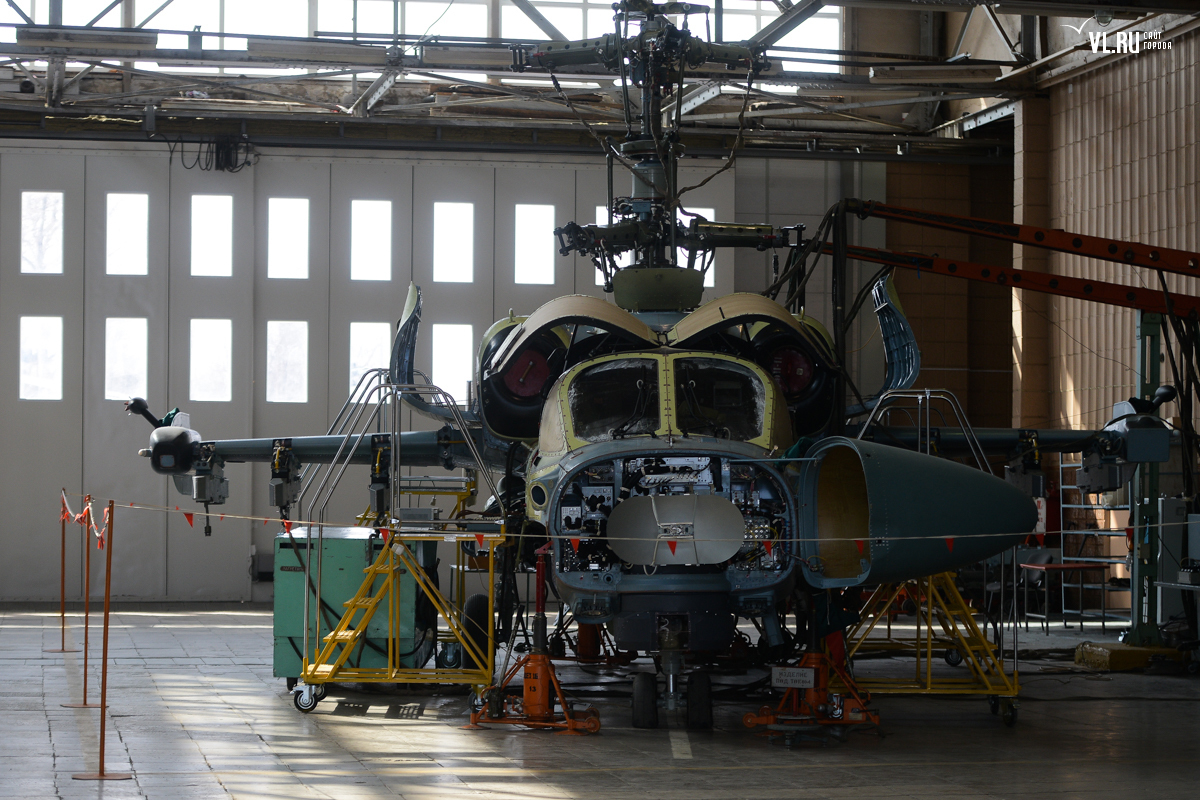 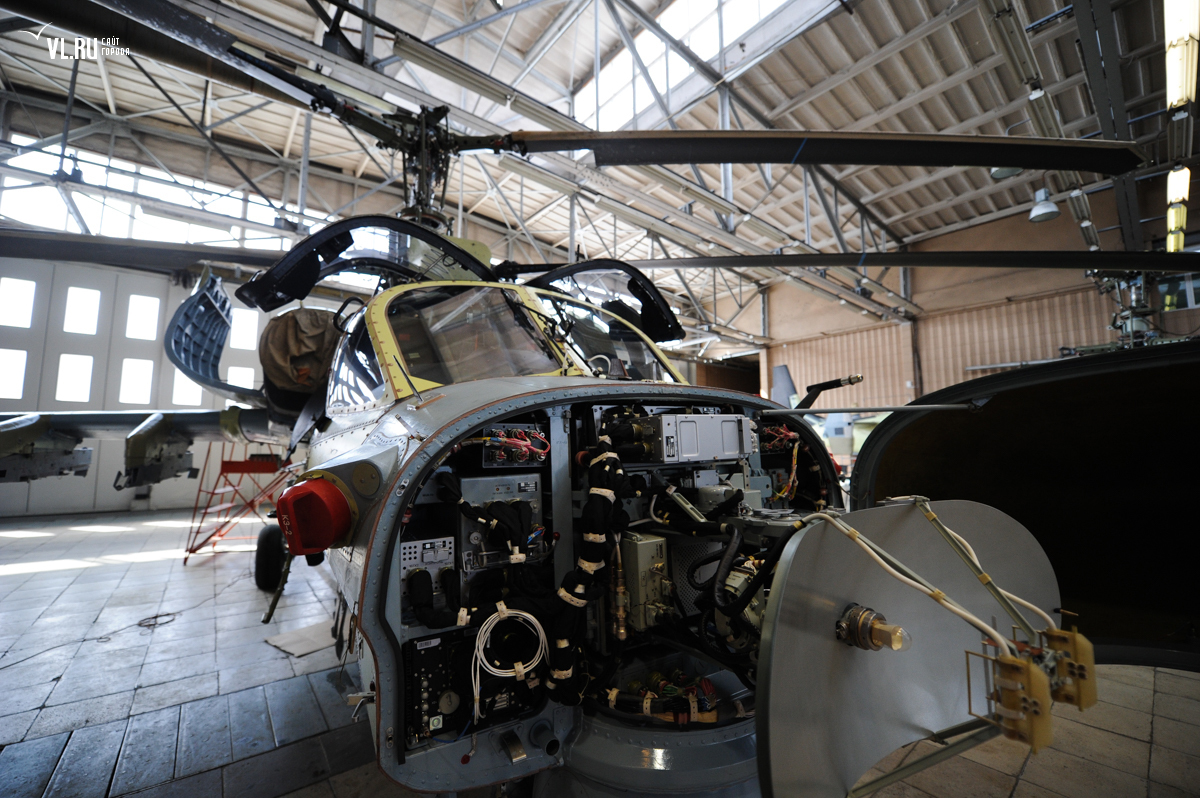 Russian Helicopters is on track to deliver this year the first examples of the Kamov Ka-52 attack rotorcraft to export customer Egypt. Parent company Rostec confirms that the first of an eventual 46 Alligators will be handed over to Cairo this year.

Dating from an order revealed in December 2015, the helicopters will operate from a pair of French-built Mistral-class amphibious assault ships acquired by the Egyptian navy.

Flight Fleets Analyzer lists Algeria as the only other export buyer for the Ka-52, with an order for 12 aircraft. Deliveries are scheduled to begin in 2019.

Russian Helicopters holds a total of 115 commitments for the twin Klimov VK-2500-powered helicopters records Fleets Analyzer, the majority from the Russian defence ministry under a contract running until 2020.
mack8

Holy cow, look at this: first MiG-35 for Egypt!

Anyone know the original source? It's not some PS or something, right?
https://pbs.twimg.com/media/C8Tz1HtWAAAF8we.jpg:large
Now if we'd see the egyptian S-300VM too, it would be great.

Meanwhile, regarding the egyptian Ka-52: 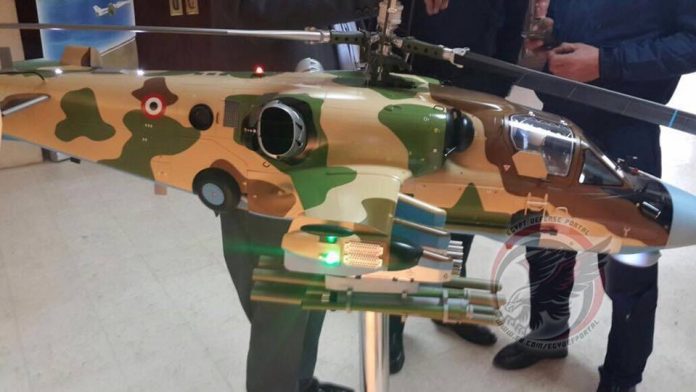 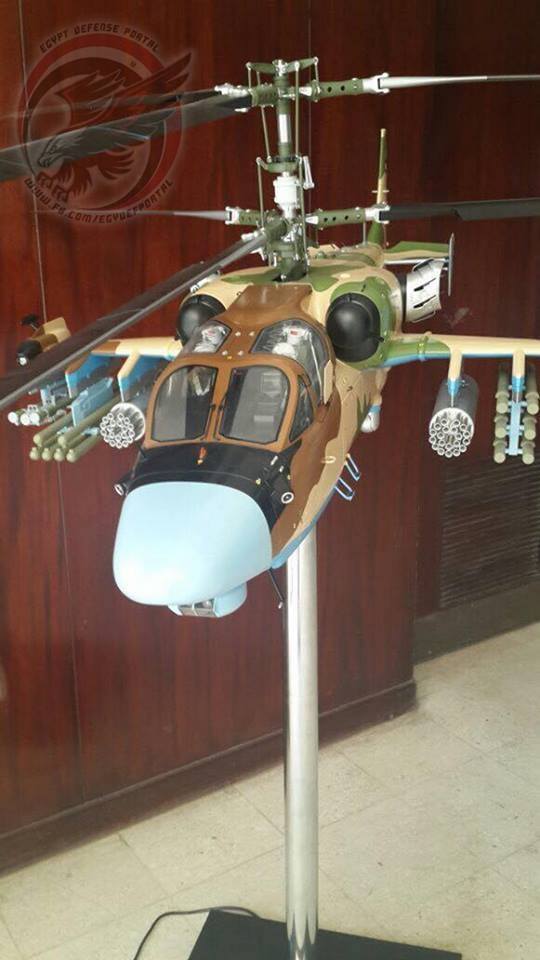 Another pic, anyone can save it ? For some reason i can't on that website

As reported by the Algerian resource "MenaDefense" in the material "Exclusive! First picture of an egyptian MiG-29/35, on March 31, the first sample of a MiG-29M2 fighter (number 811) was built, commissioned by Egypt. The photo was taken on the territory of the Flight Research Institute. M. M. Gromov in Zhukovsky. It is assumed that the first aircraft will be handed over to the customer in the second quarter of 2017. 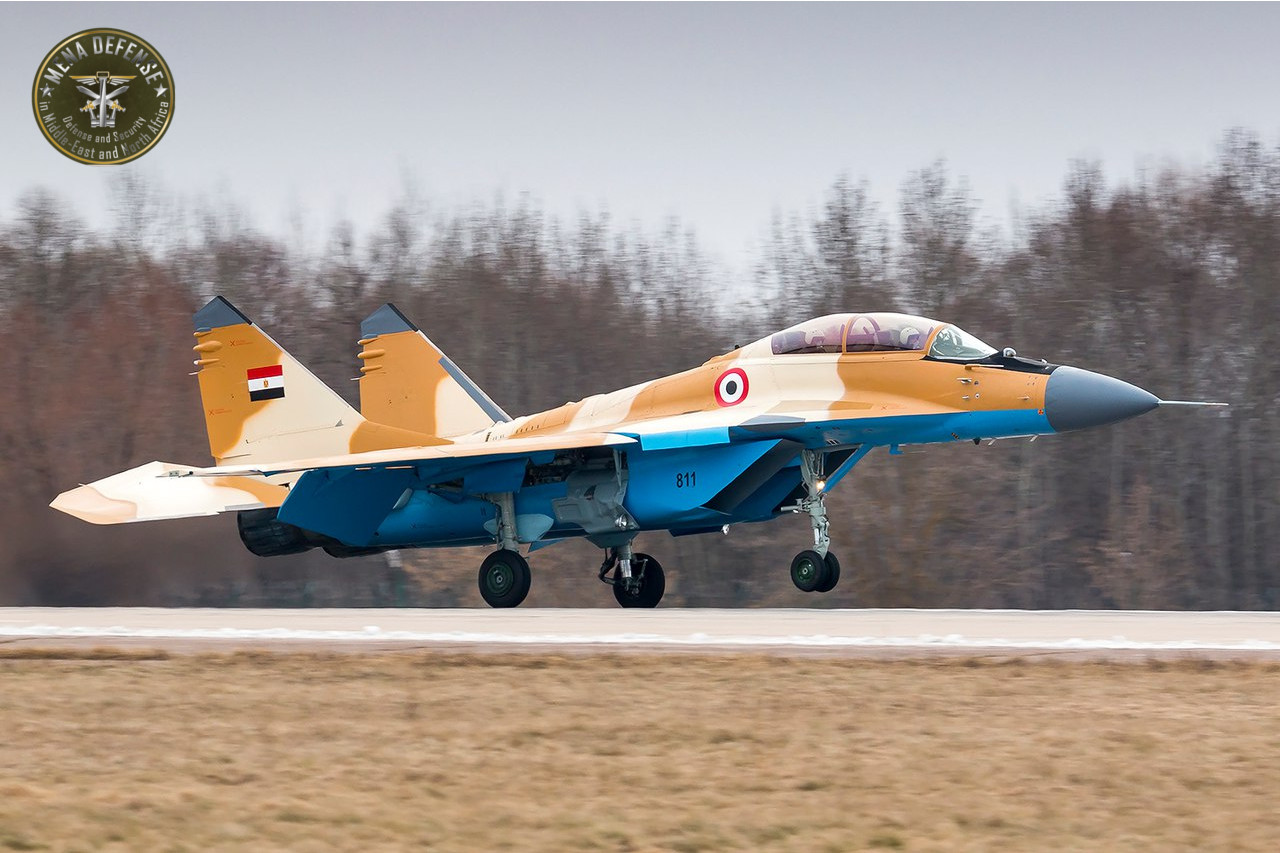 On the bmpd side, we note that for the first time in the open sources that the 46 MiG-29M/M2 fighters were agreed to Egypt, Alexei Nikolskyi said in an article in May 2015, "Egypt will load the Russians with work." A contract has been agreed to supply 46 MiG-29 fighters to Egypt. He opens new perspectives to one of the most famous Russian companies in the world "in the Vedomosti newspaper.

As reported by RIA Novosti on February 5, 2016, Rosoboronexport in April 2015 concluded a contract with one of the countries of North Africa [Egypt-bmpd] for the delivery of more than 50 MiG-29M/M2 fighters of new construction, two aircraft must be shipped as early as the end of 2016. This was stated by Aleksey Beskibalov, Deputy Director General of the Russian Aircraft Building Corporation MiG, who arrived in Nizhny Novgorod to take part in the celebrations marking the 84th anniversary of the formation of the Nizhny Novgorod Sokol aircraft plant (which was part of the MiG-based Rocket and Space Corps).

Hmm, couldn't post this pic, and the previous one i posted disappeared...
https://pbs.twimg.com/media/C8VuWlqXYAAzMed.jpg:large
mack8 A good analyse of Egypt capabilities with the new Migs, first one that is not biased and without stupid propaganda.