ZRS S-300 is capable of effectively striking aerodynamic and ballistic purposes. The system can accompany up to 100 targets and shell 6 of them 12 rockets. Range of aerodynamic defeat the purposes of 3-200 km, ballistic 5-40 km, the height of the defeat - by 27 km. Time ready for firing range of - 5 min, and the likelihood of defeat the goal of one missile is 0.98.

Russian fifth-generation complex of P-400 is able to intercept all the modern means of air attack, including nearly invisible aircraft, drones, ballistic and cruise missiles. Instrumental range target detection P-400 is 600 km. ZRS S-400 is capable of simultaneously accompany 300 bombard the 36 goals and 72 of these missiles. The complex can infect aerodynamic targets at ranges from 3 to 250 km and a height of 2 to 27 km, ballistic missiles - at a distance of 5 to 60 km. Maximum speed reaches 60 km / h.

Parallel IO Egypt is making efforts to increase the combat capabilities of its Air Force. Country's defense establishment has recently received the endorsement of the Pentagon to purchase 12 attack helicopters AH-64D "Apache Longbou.

In May of this year, the Agency for defense cooperation and security (DSCA) has notified the U.S. DoD, the U.S. Congress of a possible sale to Egypt 12 helicopters AH-64D "block 2" Apache Longbou, 27 gas-turbine engines T700-GE-701D, 36 upgraded systems to detect and target / night vision systems (M-TADS/PNVS), 28 launchers, missiles AGM-114B "Hellfayr Longbou" M299, 14 automatic shooting false heat goals AN/ALQ-144 (V) 3, 14 sets of warning radar irradiation AN / APR-39B (V) 2, as well as related equipment and services contract in the framework of the foreign military sales. " The total cost of the agreement, in the case of all options, could reach 820 million USD.

According to the media, the Egyptian Air Force also intends to acquire an additional batch of 24 F-16 fighter aircraft. Since the early 1980's. Egyptian Ministry of Defense in the United States acquired more than 200 fighters F-16A/B/C/D "Fighting Falcon", along with other weapons systems in the six phases of the program "Peace Vector". Last purchased under the project "Peace Vector-6" F-16 aircraft to be delivered "Lockheed Martin" later this year.
06.07.2009
The rights to this material belong to ARMS-TASS
Admin

Russia signs treaty with Egypt on the Military Strategic Partnership
23.06.2009

Moscow. June 22. INTERFAX - Russia and Egypt are preparing to sign an agreement on strategic partnership.

The question for the Russian President Dmitry Medvedev offers signing of the treaty with Cairo would be considered on Monday at a meeting of the Presidium of the Government.

According to a report on the official website of the Cabinet, "the draft Treaty on Strategic Partnership between Russia and Egypt, reflects the intention of both countries consistently pursue the policy of creating more favorable conditions for increased cooperation on a wide range of economic, scientific-technical and humanitarian spheres. It also included provisions concerning military-technical cooperation, cooperation in combating international terrorism, promote dialogue among civilizations. "

In addition, the Russian government is preparing an agreement with Angola and Nigeria for the promotion and reciprocal protection of investments.

The rights to this material belong to Interfax.
Viktor

Egypt has a massive amounts of military equipment and strong military, concerning its economic situation I dont see any new purchaces any time soon. More like seems to me some kind of nuclear power plant agreement with Russia.
GarryB

I would think a purchase from Russia... perhaps a Kilo class sub or something might be a token purchase to just say that we are no longer under Americas thumb and are interested in diversifying our weapon sources.

It might be the only Russian thing they ever buy, they might end up buying from Europe, but the point is to make it clear to the US they are not dependent on them, that they have their own voice.

They might not buy anything at all from Russia... they might buy from China, but the message is the same.

Just looking at what they have on Wiki I would say buying 100 Mig-29SMT aircraft to replace the F-4s, the Mig-21s, and the Mirage Vs, and of course an upgrade of the Mirage 2000s and the F-16s upgraded too would be a good relatively cheap way to improve their existing force. Perhaps their J-7s replaced with JF-17s as the cheap numbers fighter.

They could buy Yak-130 jet trainers to replace their Alpha jets, or perhaps Mig AT trainers if they want.

If the US doesn't want them to have upgraded F-16s there is the threat of purchasing Su-35s.
ahmedfire

now we negotiating on su-35 and some S air defences,,

we purchase any equipments only according to the army requirements..
nightcrawler

In the shallow Suez canal which submarine you suggest for Egypt...surely it has to be small in size what about Swedish sub choices
GarryB

The Russians make a range of mini subs including the Piranha class vessels right up to full sized vessels.

Patrol boats would make more sense in the canal for patrol duties, but for the Med and the persian gulf normal sized conventional sub designs would be fine.
ahmedfire

nightcrawler wrote:In the shallow Suez canal which submarine you suggest for Egypt...surely it has to be small in size what about Swedish sub choices

it is not about suez canal only,,we have along beaches on both redsea and mediterrian, kilo subs would be good in most areas...

How generous of the US to allow Egyptians, New Zealanders and even Russians to use their computers....

Exactly. Thank you for conceding this point.

Hello Redmotor, I see from your stats that this is your first post.

I'm guessing the talks for the S-300 are no longer active?
Elsarof

S-300 radar was shown in Egyptian military tv show, and it was in egypt as i remember.

anway , no one knows that we bought buk-m and tor-m from 2005 , till some days ago we reveled their photos.

Also there where Pechora-2M shopping even earlier.

Eygpt still likes Russian air-defense that has proved itself during its war with Israel.

On the other hand two more Almaz-Antej factories will speed up the thing.
Elsarof

Media: The source of military aid to Egypt instead of the U.S. is Russia

Egyptian Minister of Foreign Affairs of Egypt, Nabil Fahmy said earlier that the relationship with the United States "have entered a period of problems and difficulties," and that Egypt forced "to look for other sources of" weapons and military aid. According to Israeli TV, "other" refers to Russia, with which Egypt intends to sign a big deal to buy the weapons transfers MIGnews.

Russia is making very brisk business in the defence industry.
One client after the other is stepping up

i hope we dont sell them anything "to important" today they squabble with US, tomorrow they will be patting themselfs on the back again
ahmedfire

Viktor wrote:And so it begins ....

Yeah , this may be harder for Obama

Cruiser " Variag " visit to the Russian port of Alexandria soon

Translation:
RT Arabic: Military diplomatic source said that a group of warships of the Russian Pacific Fleet , led by cruiser " Variag " will soon pay a working visit to the Egyptian port of Alexandria . The source said on November 2 , the cruiser " Variag " throughout the day successfully Suez Canal , and joined to the group of Russian warships in the Mediterranean Sea to the soon an unofficial visit to the port of Alexandria, where supplemented by reserves and have a chance to rest his crew. The source added that cruiser " Variag " will be chaired by Permanent operational configuration of the Russian Navy in the Mediterranean Sea after to replace the cruiser "Moscow " of the Russian Black Sea Fleet . He said that the Russian cruiser carrying on board and Marine Corps units , and a number of helicopters "Ka - 27 " capable of destroying submarines and implementation of anti - pirate operations . It is noteworthy that cruiser " Variag " is the third version of the draft 1164 " Otlant " . NATO launched him the title of " aircraft carrier killer ." And entered in the lineup cruiser Russian Navy in October / October 1989. And provides a cruiser with 16 platform for launching rockets from the system " Vulcan " anti-ship missiles . The rockets have a range of 700 kilometers . And stationed currently in the Mediterranean as well as " Variag " cruiser " Peter the Great " , and the cruiser "Moscow" , and ship escort " Smiteleyfa ," and landing craft large " Azov ", and " Alexander شابالين " and " Minsk" and Novuccirkask "and" Yamal " . As stationed in in the center of the material and technical insurance in Tartous floating laboratory " IBM - 138 " of the Russian Pacific Fleet . 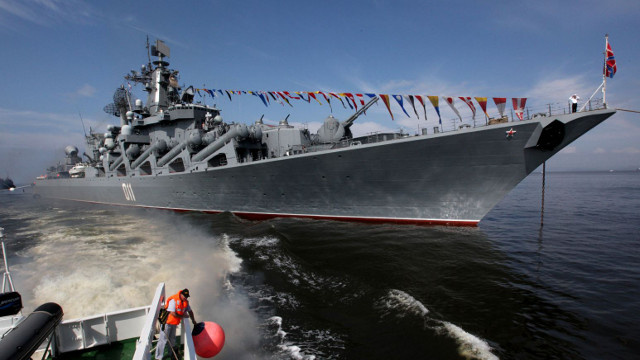 This would be huuuuge if true.

Egypt Turning from US to Russia for Military Aid

With the return of the delegation from Moscow, Egypt expressed intentions to buy MiG-29 planes and other military equipment from Russia in a 15 billion dollar deal. Some reports indicate Saudi Arabia - which is itself experiencing something of a crisis in its relations with the Obama administration - will help finance the deal.

Russian 'military aid' to Egypt?
Uh yeah no thanks, we have enough of our own obligations

Certainly a low-interest loan or 2 can be in order though.

And the Saudis financing Egypt's purchases of Russian arms? I would have thought that they are still butt-hurt with Russia over Syria and Iran.
Viktor

flamming_python wrote:Russian 'military aid' to Egypt?
Uh yeah no thanks, we have enough of our own obligations

Certainly a low-interest loan or 2 can be in order though.

And the Saudis financing Egypt's purchases of Russian arms? I would have thought that they are still butt-hurt with Russia over Syria and Iran.

Saudi Arabia just recently gave 15 bin $ to Egypt because they eliminated MB. They dont want to see Egypt or Syria or anyone else for that matter fall under influence of MB because

they think they could be next. Thats why they are financing Al Nusra front and ISIS and all other extremist groups in Syria that are besides Syrian Army fighting FSA as well. They want to

prevail and by doing so stop expansion of MB.
TheArmenian

Saudis did not give money to Egypt, they just "promised"...
Sponsored content