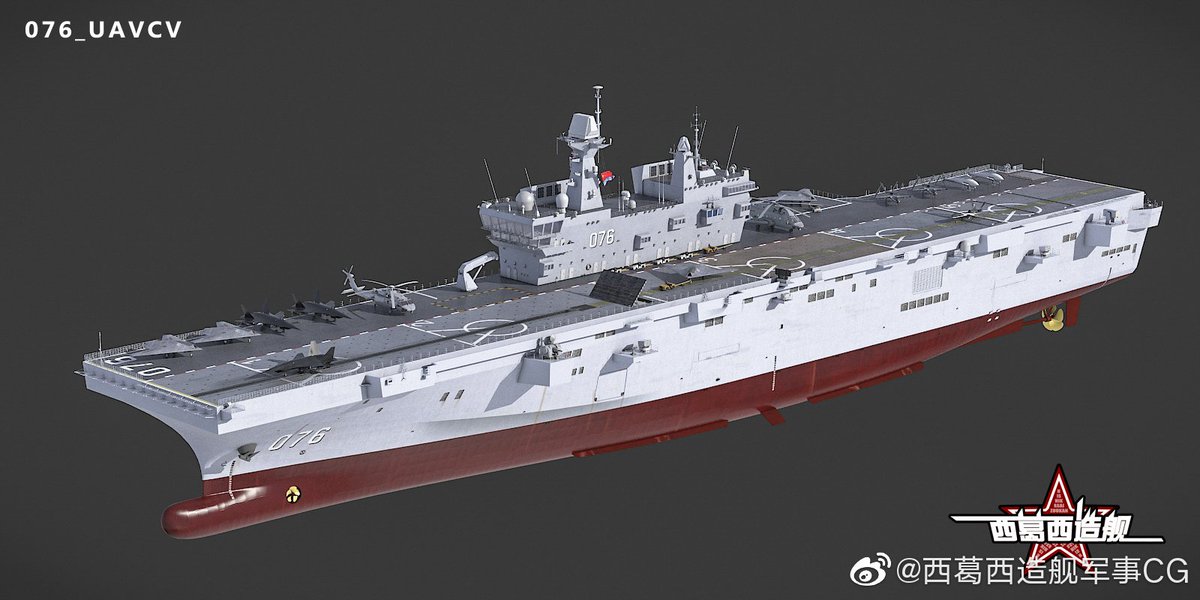 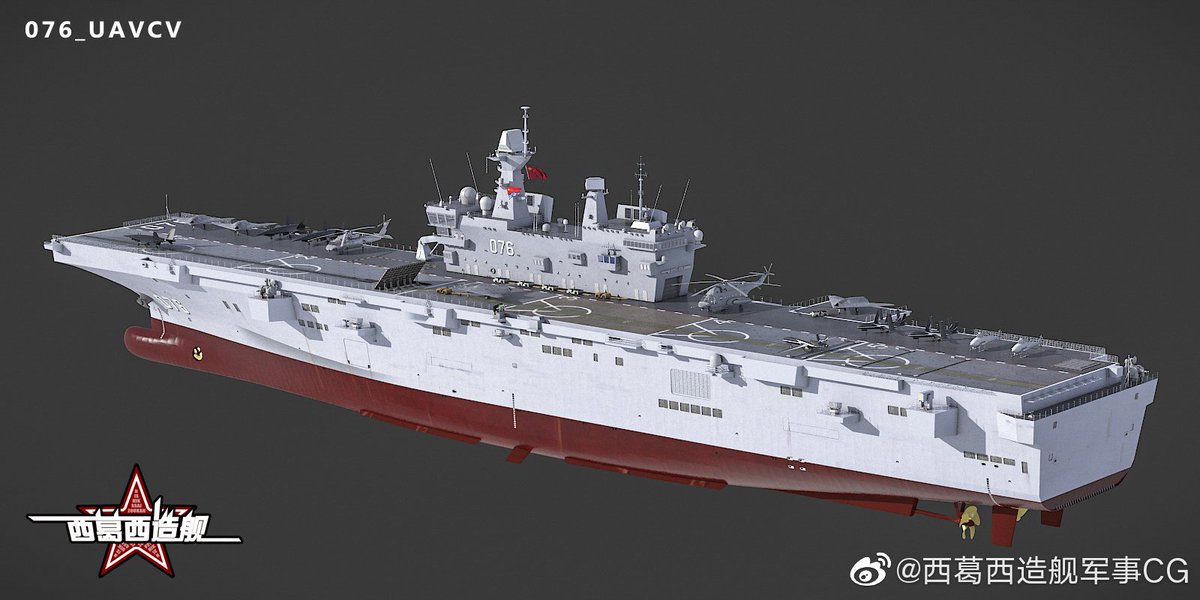 IMO it will beto launch heavily armed close in support jets like su-25 during landing operations to clean the area from atgm team and artiellery in the back.

Air cover will be the role of normal carriers which should have hands full fighting enemy airforce and coulfn't help the landing forces with air to ground missions.
Tsavo Lion

These smaller LHD/As mini carriers will save them a lot of $ & time:


It makes sense, as they now have unsinkable CVs on the islands in the SC Sea.
walle83

Tsavo Lion wrote:These smaller LHD/As mini carriers will save them a lot of $ & time:


It makes sense, as they now have unsinkable CVs on the islands in the SC Sea.

Intresting how some media always wants to talk down on all things that isnt american. "Chinas budget is only 250 bilion dollars" yes and its going up faster then any other nation on the earth, "The only have old soviet carriers" Yeah and 10 years ago they didnt have any. "They only have old fighters" Same generation as the F-18 and they are in progress of develop new fighters. "The dont have ships to keep the carriers company" eeh typ 052C destroyers, type 052D destroyers, type 055 destroyers????
GarryB

Intresting how some media always wants to talk down on all things that isnt american.

It is pathetic isn't it... there is our way and the wrong way... if that way worked we would have done it that way...

Of course the Chinese have a totally different set of requirements from the west and from Russia, so they need to examine the costs and results of each choice and work out which suits them best... and then ignore the shit from the west.

I remember a rather intelligent guy on the Key Publishing forums telling me the big problem with super high speed anti ship missiles is that they are too big to carry in useful numbers so they are doomed to carry them in tiny numbers on huge subs and ships, which they can't buy in anything like the numbers the USN can make their smaller lighter but often not much cheaper Harpoons.

The amusing thing is that over the years their missiles have gotten smaller and lighter and FASTER... and can actually be carried on a wider variety of platforms than the US uses for Harpoon... and right now they are looking at Harpoon as being inadequate and are looking at upgrading Tomahawks instead...

The Soviet introduced smoothbore guns for tanks, the west said it was stupid... till they did the same... the BMP was a deathtrap... and then the west started making IFVs too... the BTR was a wheeled joke that no country with checks and balances in its system would tolerate... till they got striker brigades... rocket powered torpedoes, tank gun launched missiles... the list is enormous... but when you don't dismiss out of hand the ideas and look at why they went with that solution it so often makes sense... and eventually the west does it too... and they gloss over that they thought it was a stupid idea to start with...

The amusing thing is that the US does not cancel expensive programmes for things they don't really need quickly enough, and end up with lots of stuff they can't use yet paid top dollar for...

China does not spend as much as the US does on its military but it also does not piss away billions of dollars on crap that not only does not make America safer, but that actually creates more trouble for the US around the world... China does not have hundreds of bases overseas it needs to maintain and operate.

I would expect China to be much more sensible with their spending on everything.... they can't just print more like the US does... and just because they are sensible people.


"The only have old soviet carriers" Yeah and 10 years ago they didnt have any.

They bought them because that is what was available to them at the time. They have learned and gotten real experience that will be vastly more valuable than the costs involved in buying and finishing those ships... value for money... even though it is now clear it is not ideally what they want for themselves it was a useful stepping stone towards getting what they need.


"They only have old fighters" Same generation as the F-18 and they are in progress of develop new fighters.

If the stories are true they know the F-35 inside and out.... the US should probably ask China for help to get that turd polished up a bit so it smells less and shines a bit more. I would expect the Russians and the Chinese... separately to sort out the problems with EMALS faster than the US too.... there is a group in the US who are satisfied with their use of China against the Soviet Union during the Cold War and they want to repeat that now by using Russia against China... perhaps part of this suggestion by Trump to turn the G7 back in to the G8... but Putin has already said the G7 or G8 doesn't really make sense any more if it does not include China or India and a few other countries who should be part of the group finding solutions to problems.

Clear pictures of the 003 carrier coming together. 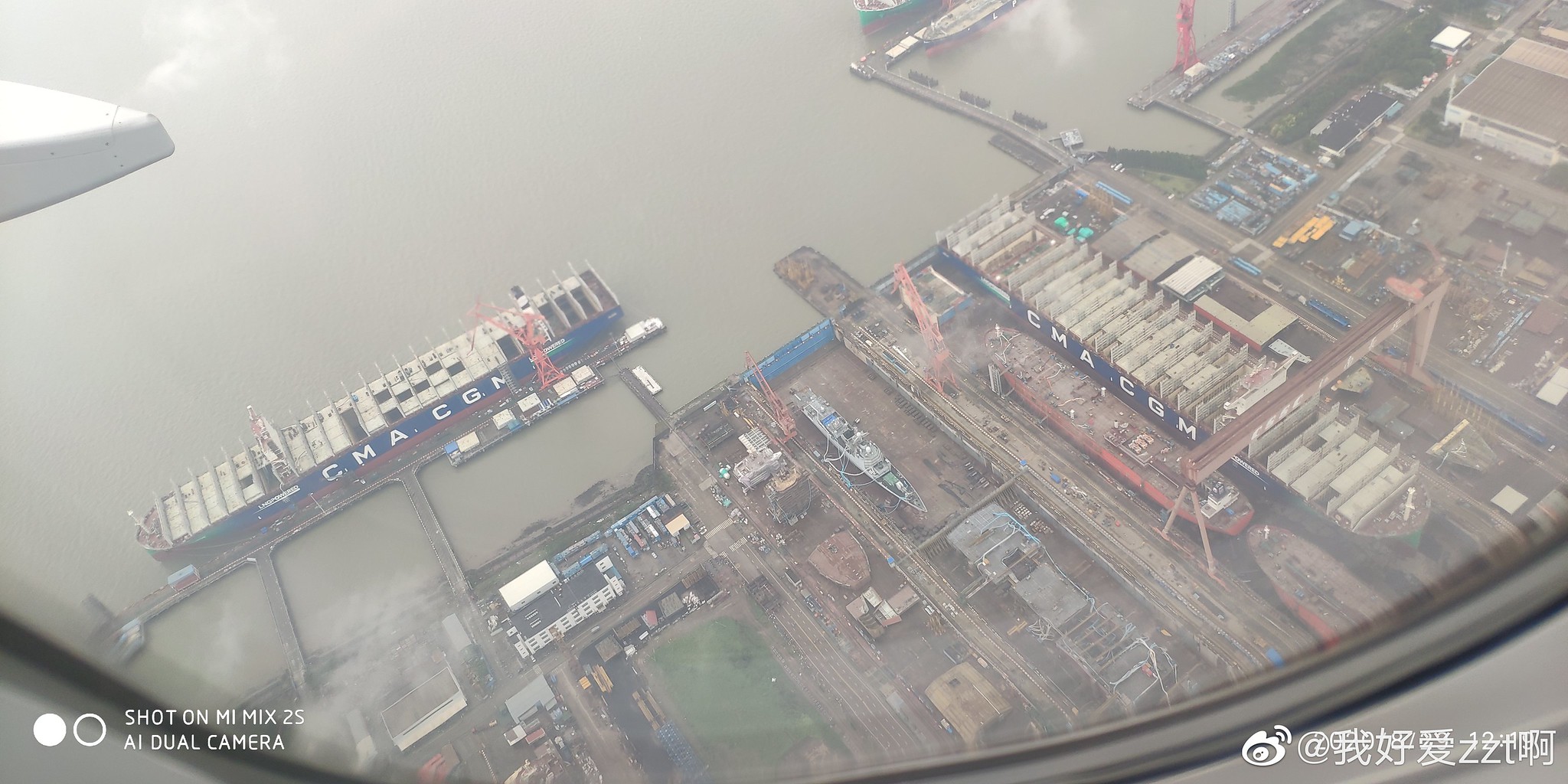 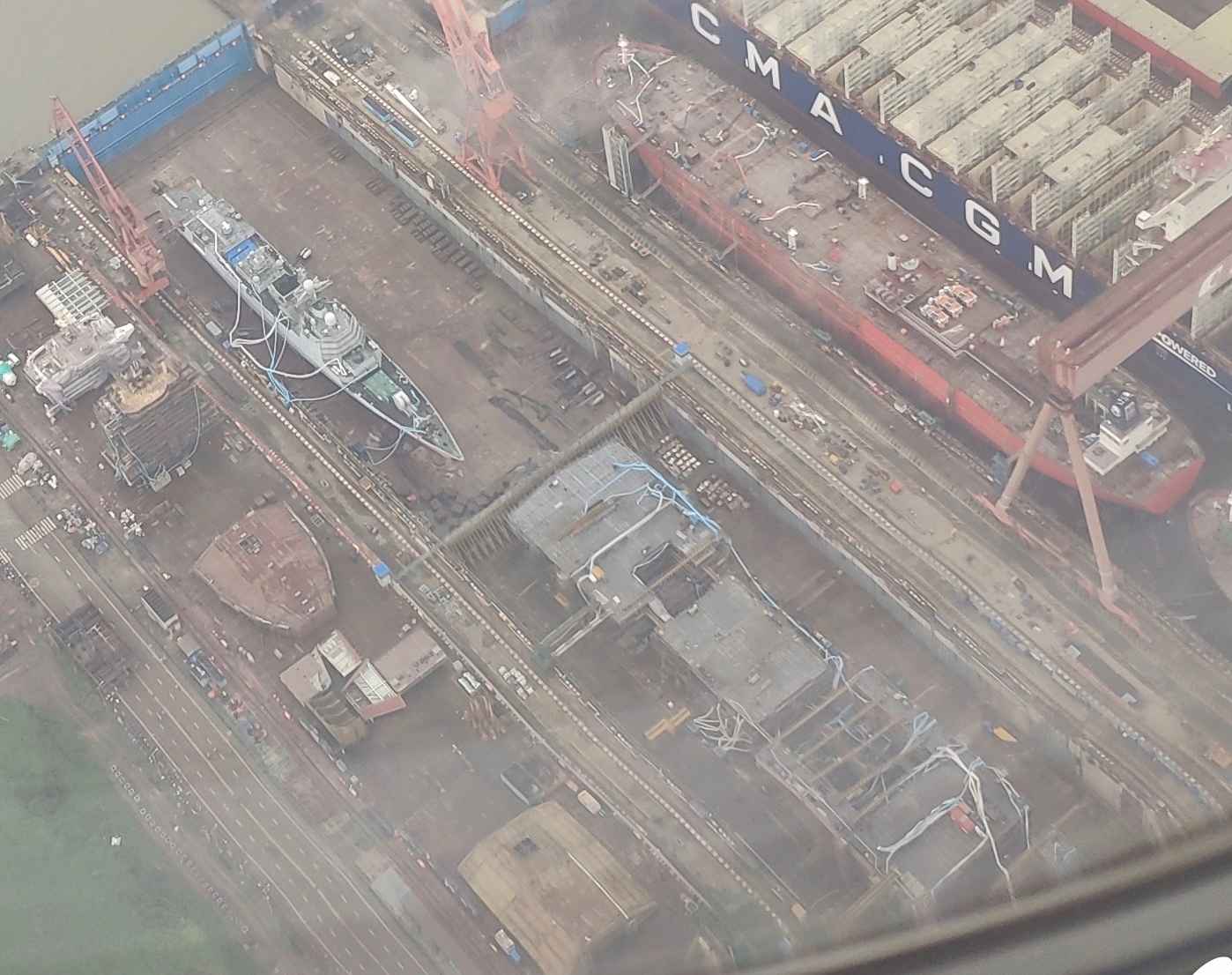 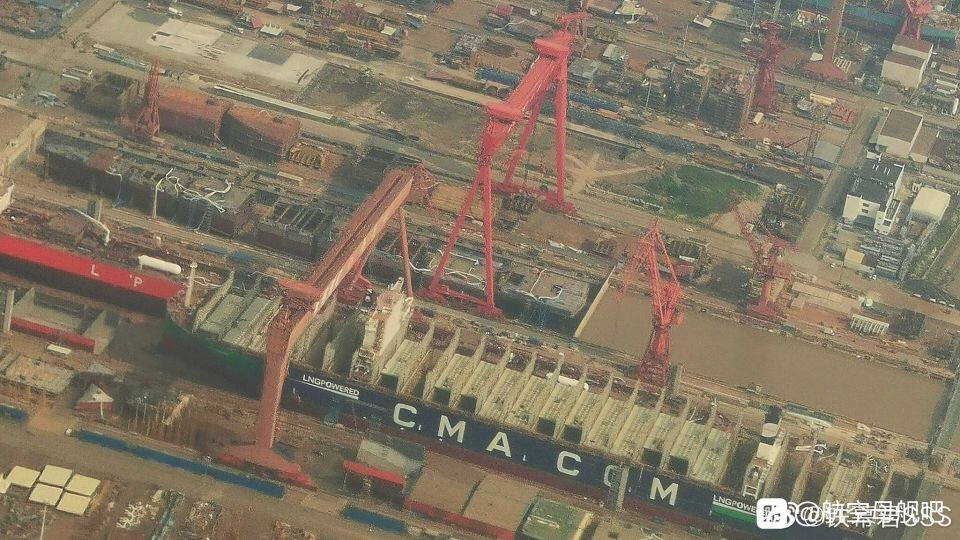 What the size of that ship CMACOM ? The carrier looks like a missile boat next to it

Isos wrote:What the size of that ship CMACOM ? The carrier looks like a missile boat next to it

I would say huge, the carrier have water line lengh of about 320meters in comparisment. Note that the flightdeck havnt been added on the carrier yet so the beam will become larger.
Tai Hai Chen

Well they will have 3 carriers and 3 LHD. And yes they have a very speedy construction, however its been a long time coming here. They bouht the first carrier, Varyag, from Ukraine back in 1998 and it wasnt finished untill 2012.
And the third carrier probably wont be comissioned before 2022 and the first steel was rumored to have been cut back in 2017. So thats atlest 5 years construction time and outfitting.

Also we have no information about what fighter the new carrier will carry, the J-15 to start with probably but that fighter havnt been in production for some time now. The rumerd replacement, the J-31, is still in testing fase and wont ready for a number of years.
GarryB

Welcome to the forum Tai Hai Chen, it is a forum rule that new members introduce themselves in the introductions section and read the rules.

I am in the process of making the Rules easier to find and more accessible.
Tsavo Lion

walle83 wrote:Also we have no information about what fighter the new carrier will carry, the J-15 to start with probably but that fighter havnt been in production for some time now.

..the Chengdu Aerospace Corporation (CAC), another subsidiary of AVIC responsible for the design and building of the People’s Liberation Army’s (PLA) J-20, had pledged to produce 300 of the jet in the next decade.
China Resumes J-15 Jet Production
walle83

walle83 wrote:Also we have no information about what fighter the new carrier will carry, the J-15 to start with probably but that fighter havnt been in production for some time now.

..the Chengdu Aerospace Corporation (CAC), another subsidiary of AVIC responsible for the design and building of the People’s Liberation Army’s (PLA) J-20, had pledged to produce 300 of the jet in the next decade.
China Resumes J-15 Jet Production 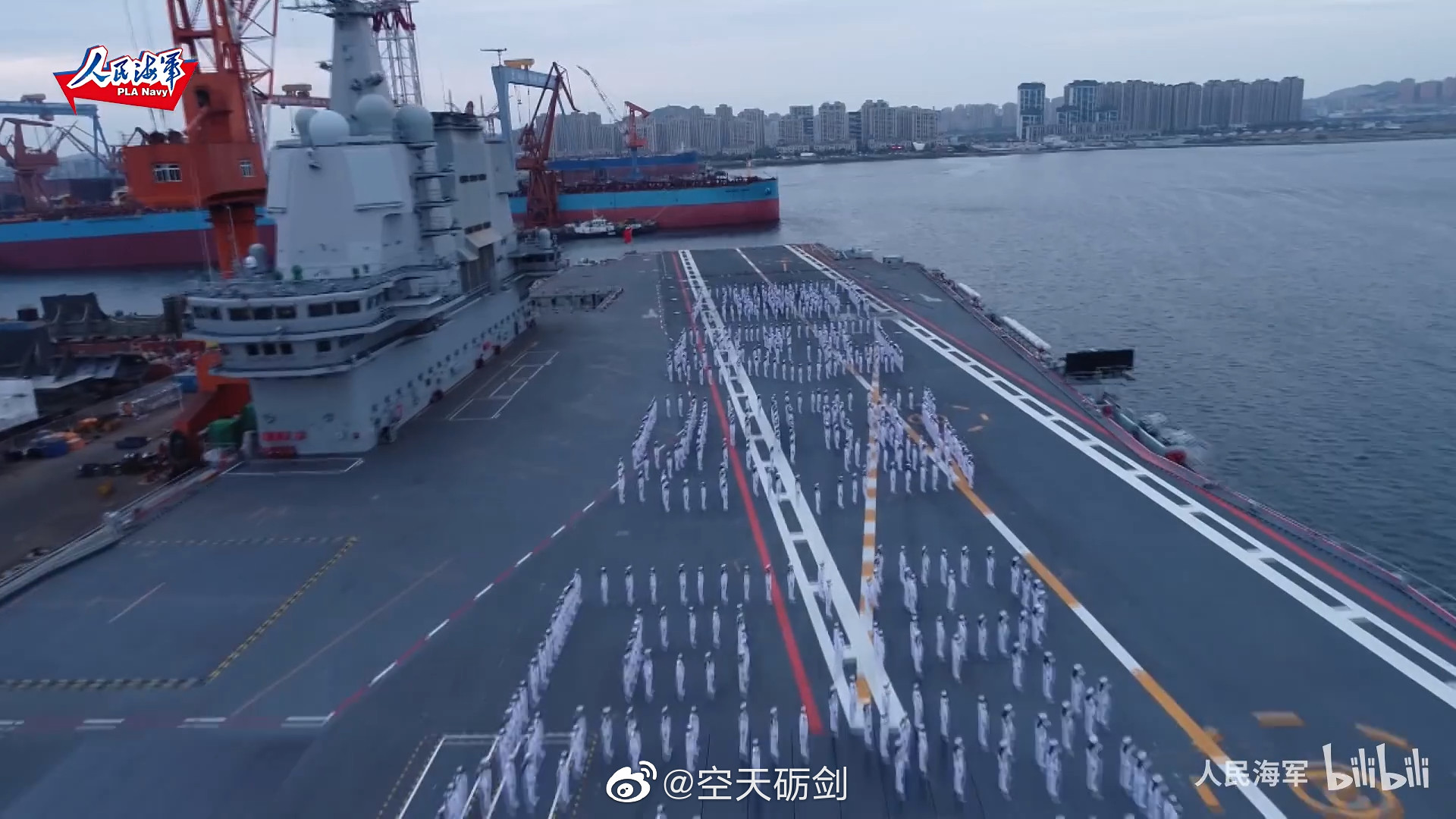 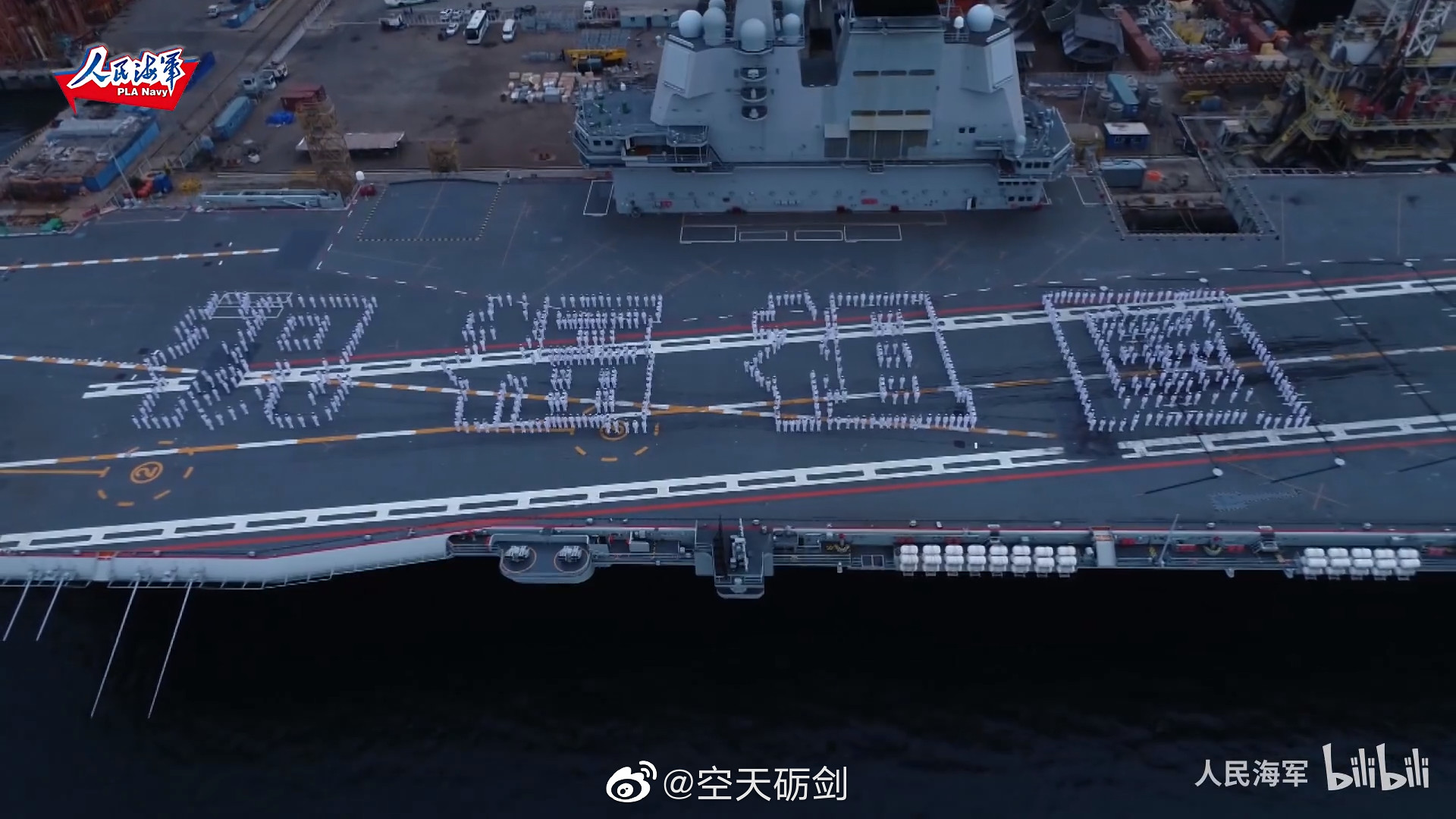 003 carrier with Type 55 destroyer below, to compare the destroyer is 180 meters in lengh making the current hull of the carrier about 300 meters. Finished it should be around 310-330 meters.

They focused on actual combat and have effectively tested the performance of the weapons on the ship, Lai said.

The testing and training show that the carrier's core performance improved, according to Lai.

As the Shandong has just served for less than a year, it is still undergoing basic training to test the performance of its equipment and enhance research on the operations and training of the ship, Zhang Junshe, a senior research fellow at the PLA Naval Military Studies Research Institute, told the Global Times on Tuesday.

The Shandong, the country's second aircraft carrier, was commissioned into the PLA Navy on December 17, 2019, in Sanya, South China's Hainan Province.

It set out for military exercises on 1 September, and experts hoped it would be combat-ready by the end of 2020.

In May, CCTV reported that the ship was conducting testing and training missions at sea after local residents saw the warship leaving a shipyard.

Since the COVID-19 outbreak, the aircraft carrier neglected neither epidemic control nor testing and training, as professional training has been conducted for individual sailors, battle positions and departments, CCTV reported then.

The ship conducted its reported first mission on December 26, 2019, after commissioning the week before, during which it sailed through the Taiwan Straits.

The Sanya-based warship will come and go in the region often as such transits will likely become routine, Chinese mainland experts predicted.

China 3rd heavy carrier on track for launch before end of year.

There's a rule against posting other forums links here, so pl. don't do it again to avoid this thread being blocked & u taking a break again.
George1

Those figures r off the wall, what do u base them on?
Isos