magnumcromagnon wrote:Ukrainian MIC amounts to glorified maket makers. Their new IFV probably performs like dog-shit, see the Oplot and the BTR-4 for reference. The welding seams on their AFV's are as resilient as the seams on a sliced peanut butter and jelly sandwich's. It goes to show that the Russians were the brains behind their MIC...when they left, the quality went with them, and were even starting to see the same phenomenon in Belarus' MIC as well.

This is no joke.  The whole post USSR space outside Russia is undergoing hard core decline in terms of industry and technological capacity.
This is not some chauvinist self-delusion, it is real.   Economics and technological capability are not something that is trivial and a few dollars
will keep things intact.   It requires a critical mass to function by focusing the education and training of young workers and viable throughput
of factories that pay for research divisions.   The post Soviet space has been infested with western laissez-faire monetarist voodoo that
has diverted the economy to reselling of consumer trash and other get rich quick nonsense that afflicts 3rd world countries.

It is sad to see all of the knowhow and human capital wasted, but it is the local residents that drink the koolaid and not just their elites.
Their hate for Russia is simply insane.   By now anyone with a functional brain should have realized that Russia was no colonialist occupant
but facilitated development and real prosperity for the masses (NATzO Cold War propaganda is not worth the paper space).

Russia by contrast retained the critical mass all though it was touch and go during the 1990s since the same voodoo economics rot was
afflicting it as well.   But Russia has to stand on its own to survive the attack from NATzO since it has not surrendered like the post Soviet
Ukraine, Georgia, now Belorus and apparently Kazakhstan.   Their elites just need some crumbs from their NATzO masters and can let their
countries decline to real 3rd world levels but Russia cannot.

The Ukrummyians are now claiming responsibility for the origins of Armata!

I do find it hilarious.

On that note, I noticed Topwar.ru doesnt seem to be posting Russian military weapons news lately. Very rare I see it. Mostly advertising western gear. Is it another compromised site?

magnumcromagnon wrote:
The Ukrummyians are now claiming responsibility for the origins of Armata!

Typical butthurt loser fantasy projection. All of the sudden they claim a common Soviet legacy since the tech is not in their
paws. But with common legacy Antonov it is all 100% Ukr property. Get f*cked.

Sure, all Soviet tank design efforts were 100% Ukrainian.

I am half Ukrainian and it makes me cringe hearing Ukrainians basically steal Russian history from before 1000 AD
until today. There was no f*cking Ukraine even in 1800. There were lands partially assimilated by Polish-Lithuanian
and Austro-Hungarian occupation. These lands are at most 1/3 of modern Ukraine. There is no Ukraine in
Novorossiya spanning from Odessa to Kharkov. Kiev was the capital of Rus, which is Russia and not some "border land"
aka "Okraina" aka "Ukraina".

miketheterrible wrote:I do find it hilarious.

On that note, I noticed Topwar.ru doesnt seem to be posting Russian military weapons news lately.  Very rare I see it.  Mostly advertising western gear.  Is it another compromised site?

The same thing is happening to VPK.name and to BMPD live journal (albeit to a lesser extent). They're consistently citing absolute trash site portals like Sohu, The National Interest, The Drive, Ukrainian and Western psuedo-news outlets 9 out of every 10 articles, and even posting the domestic liberast media with inflammatory articles....but it's clear their goal is to generate as many clicks as possible by stirring controversy.

Here are some alternatives, rg.sila, doesn't saturate you with completely baloney and inflammatory articles, they emphasize quality over quantity:

There's also sdelanounas.ru, they don't exclusively cover military subjects (obviously) but they do cover all the important developments:

There's also youtubers (which may'be the future of news outlets) who cover the subjects out of passion, and not to generate ad banner traffic:

And where is money coming from?

They had to stop production of their own artillery pieces cause it didn't even come close to quality standard where it was safe to use. And then they also ran out of money. So where did it come from for these artillery pieces?

Like the Neptune missile, this will end up being token order and that's it.

Seen an article yesterday or today in which the Ukrainian National Security Secretary was stating the 2020 defense order would be 50-60% unfilled.

Tank units of the Armed Forces of #Ukraine in #Donbass are urgently completing the T-72AMT and T-64BV.

In March of this year, repair enterprises of Ukraine delivered 25 tanks to the Ukrainian Armed Forces. So, at the beginning of the month, 6 T-72AMTs were transferred to Kiev.

U.S. Embassy Kyiv
@USEmbassyKyiv
·
5h
The United States continues its unwavering support of the Armed Forces of Ukraine with $7.85M in command and control, communications, vehicle spare parts, medical components, & tactical equipment as part of the latest delivery of security assistance totaling over $2B since 2014. 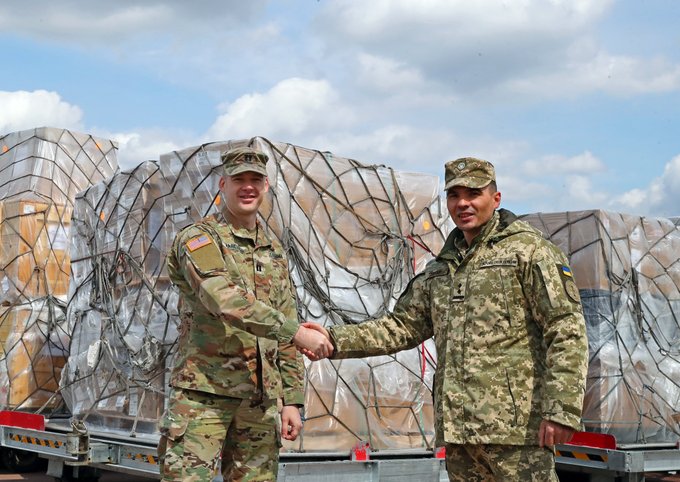 JohninMK wrote:U.S. Embassy Kyiv
@USEmbassyKyiv
·
5h
The United States continues its unwavering support of the Armed Forces of Ukraine with $7.85M in command and control, communications, vehicle spare parts, medical components, & tactical equipment as part of the latest delivery of security assistance totaling over $2B since 2014.

These items will all prove useful in retreat

The first photos of the experimental Mineral-U radar, which is part of the Neptune land-based anti-ship missile system 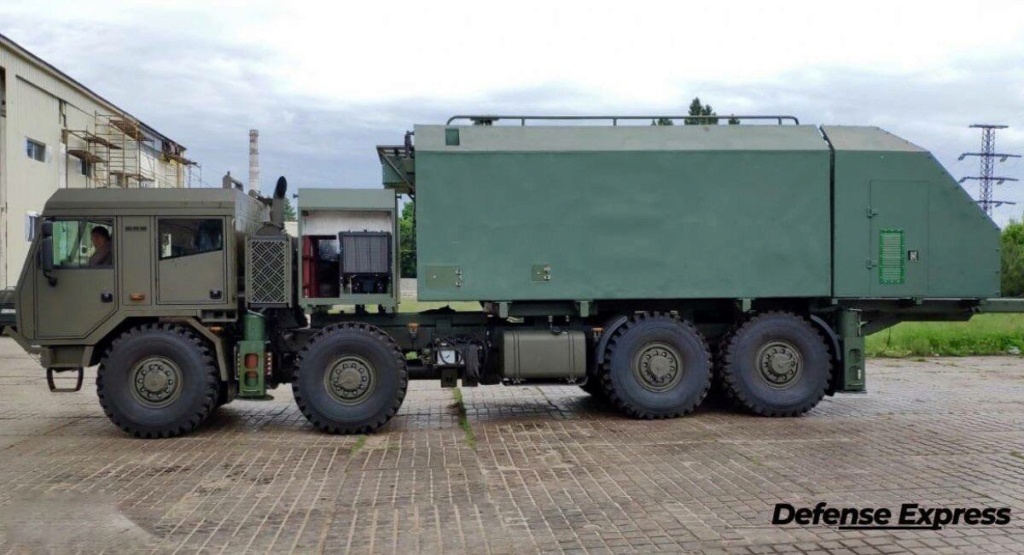 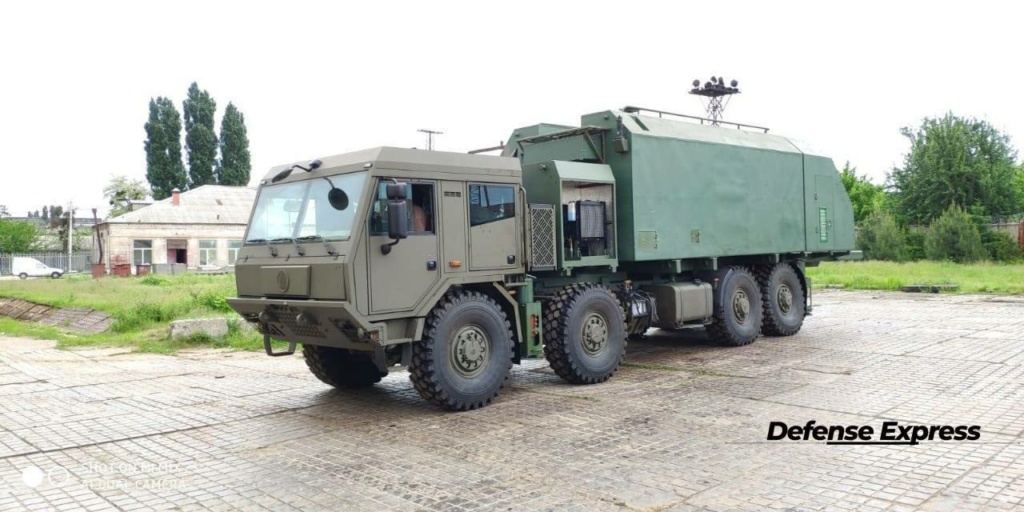 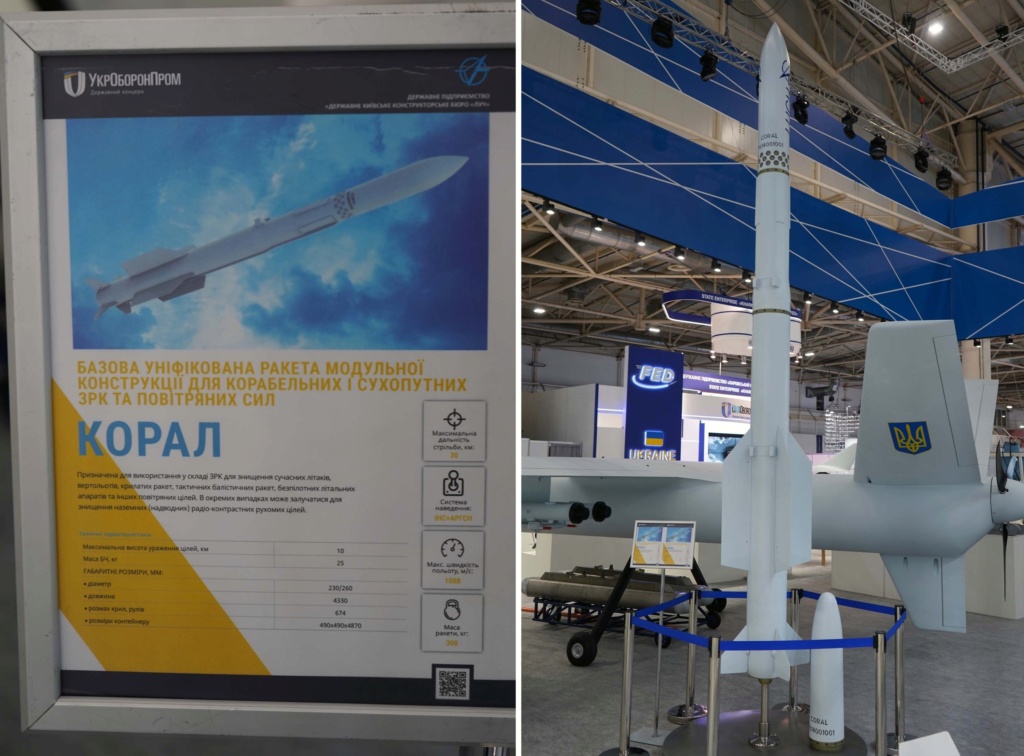 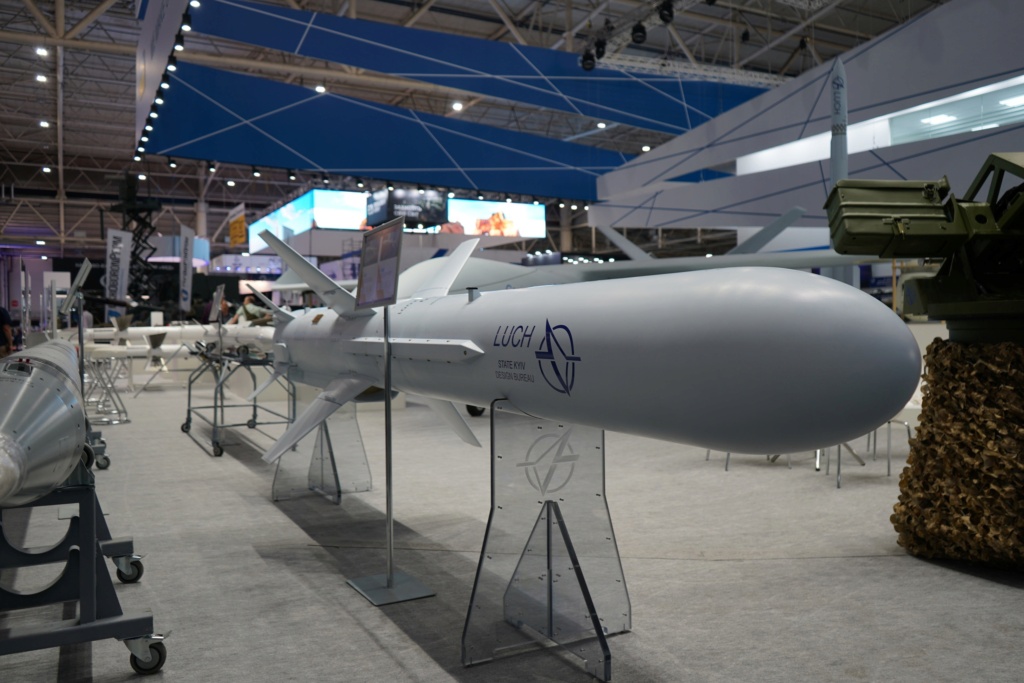 As follows from the data provided by the developers, the new anti-aircraft guided missile was created on the basis of the Olkha MLRS missile and is capable of hitting air targets at a range of more than 100 km. The new missile defense system will receive an active and passive homing head of Ukrainian production with an "inertial guidance system and data transmission line".

As stated in the Luch Design Bureau last summer, it takes 2.5 years to create a new anti-aircraft complex, and 30-50 million dollars are needed to assemble prototypes and test them.

At the same time, it is emphasized that a number of components for the new air defense system have already been created and even tested. We are talking about the radar station (radar) 80K6KS1, which, according to the Ukrainian media, will be part of the SAM. In total, as stated in the Luch Design Bureau, 40-50% of the components for the anti-aircraft missile system have already been created and tested 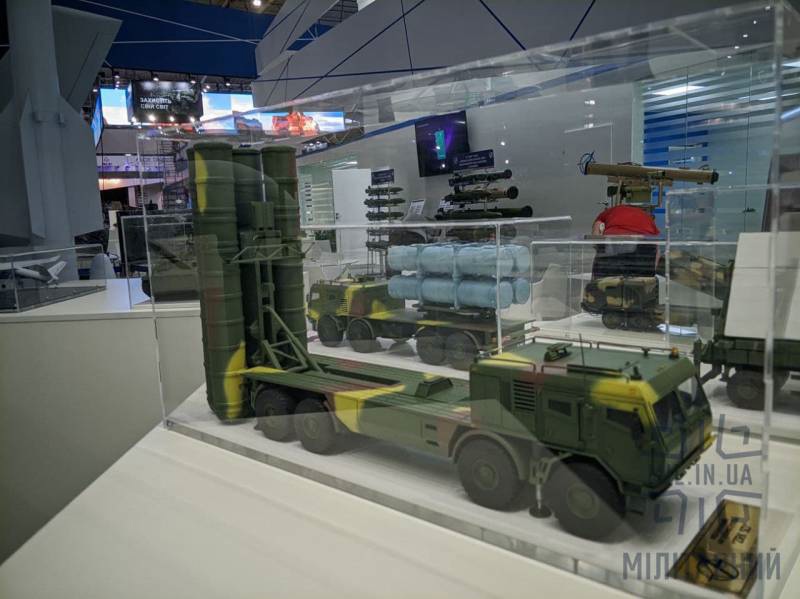 Ukraine presented the Amulet complex for new anti-tank missiles at the exhibition.

The second day of the exhibition "Weapons and Security 2021" is underway in Kiev, where defense industry enterprises demonstrate their products. The State Kiev Design Bureau (GKKB) "Luch" (Ukraine) for the first time presented at the exhibition the "Amulet" missile complex for new anti-tank missiles. It is adapted for use as the PK-2S missiles, and the latest, as they say in Ukraine itself, the PK-2M.

Luch also presented combat modules for arming Ukrainian Navy and Marine Guard boats. This is a complex of guided sea missile weapons "Barrier-VK", designed to destroy ships with missiles RK-2B, ground armored targets and helicopters. It is capable of detecting objects at a distance of 12 kilometers and has a range of seven km. The guidance system works on a laser beam with the target tracking in automatic mode. 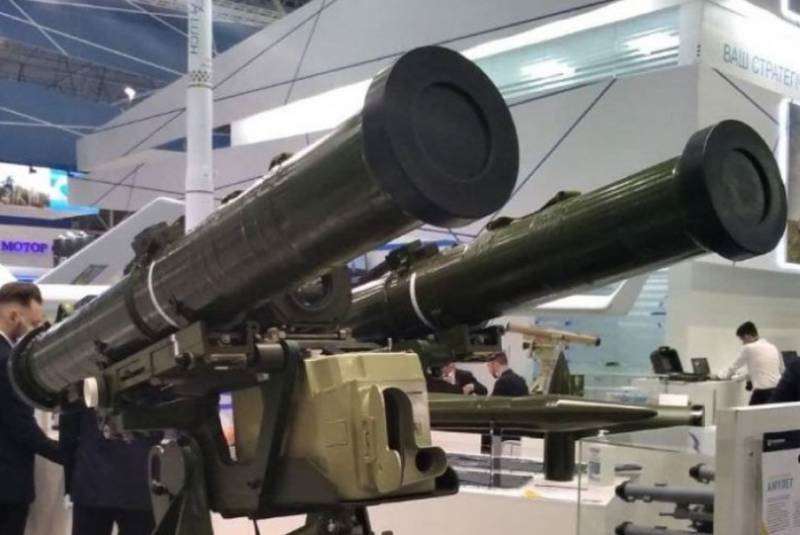 Ukraine has presented a prototype of a long-range optical-electronic tracking station.


At the military exhibition "Weapons and Security 2021" held in Kiev these days, among the novelties of the Ukrainian military-industrial complex, a prototype of the "Jura Optikum" long-range optical-electronic tracking station produced by the Research and Production Corporation "CLEAVER" LLC from the city of Krasny Luch, Luhansk region, was presented.


The new complex is designed to detect targets, take them on tracking and transmit data for destruction. According to the developers, the complex works both in the normal and in the infrared ranges, the target is tracked in automatic and semi-automatic modes or by the operator. At the same time, the complex can work on air, land and sea targets.

According to the Ukrainian press, the complex is capable of capturing up to 6 targets simultaneously, if they are in the field of view of the lens.

According to the plans of the developers, this complex can be used both in a stationary version, for example, on towers, and in mobile, installing on airplanes, boats and ships, as well as cars. 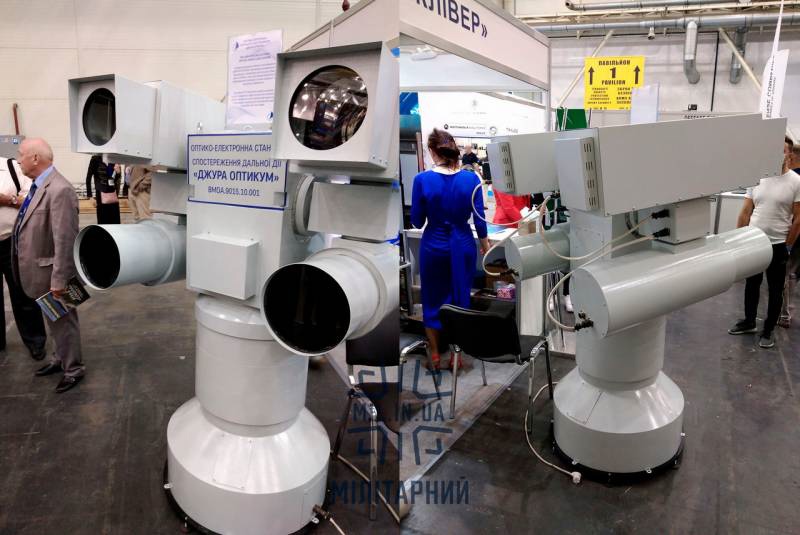 It makes one wonder how Ukraine's military industry will get the funds for these Amulet missiles given supposed influx of Javelin and Spike missiles.

lancelot wrote:It makes one wonder how Ukraine's military industry will get the funds for these Amulet missiles given supposed influx of Javelin and Spike missiles.

If what they say is true how their country would go bust over Russia dropping $3B a year in gas transit funds, means they are barely holding together and whatever token money they get, is to make a 1 time example systems and thats it.

I highly doubt is it even a system.
Back in 90s, this kind of action was implemented by all exWarPac members, whose MIC was struggling to survive.
The world was astonished by different systems and weaponry, that were never put into any operation later.
Half of them were made of cardboard, the other half of plastic. And "a steel prototype" was used as a synonym of something well advanced in the design process.
Ukraine does not have the money needed to put any of that into operation.
They still have some stocks, so will be able to make a new carbon fibre body with a fancy shape to demobilized or taken out of factory storage missile.
Show it on an exhibition, with a card claiming some virtual parameters, hoping they will find a customer stupid enough not to remember the Ukrainian MIC saga milestones.
Phantom pains of the amputated head, that is what it is.

At the exhibition "Weapons and Security-2021", teachers and students of the Lviv Polytechnic University presented a new Ukrainian combat robotic complex on the chassis of a motor-block. 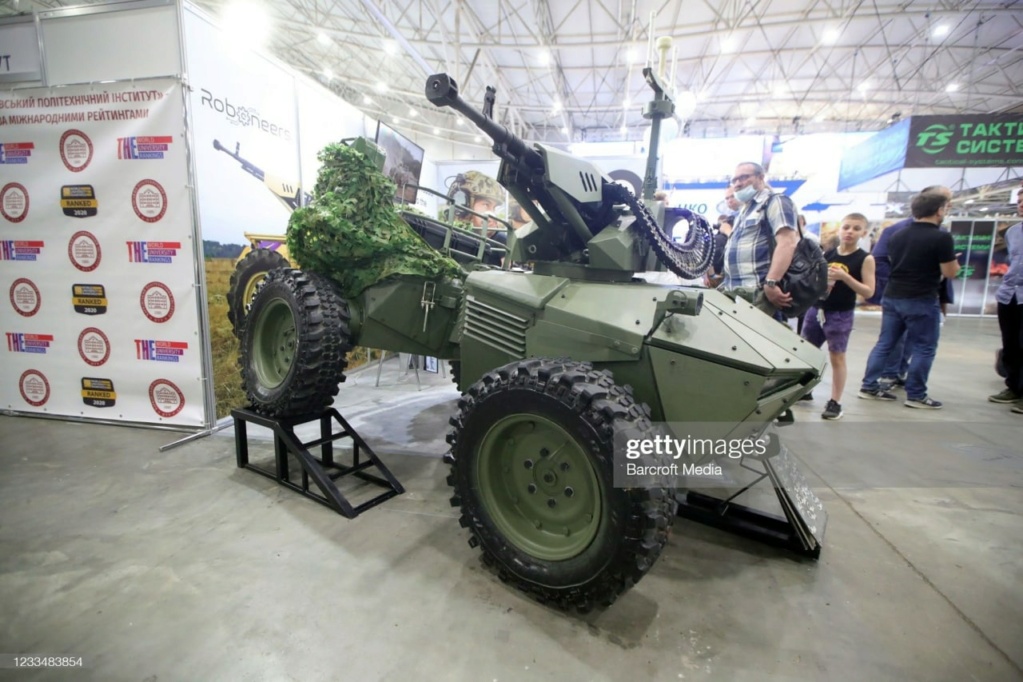 New Ukrainian infantry fighting vehicle Kevlar-E. It is made on the basis of 2S1 or MTLB. Looks outdated already 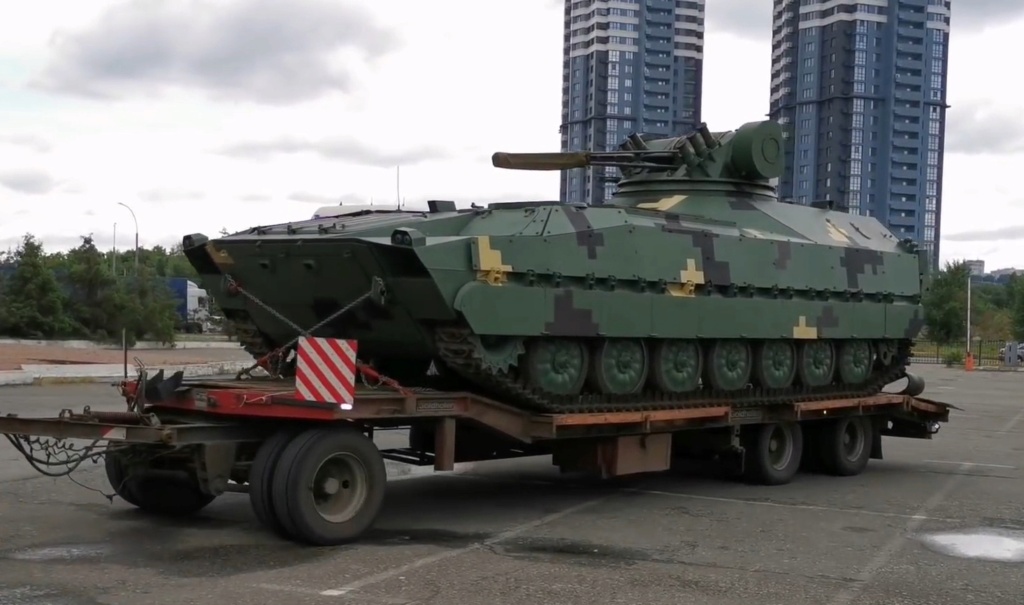 Good, they have some 2S1 left from Soviet times. Maybe the hulls won't crack.

If we consider this as a second life for 2S1, then this is not a very bad project
Sponsored content