As extensive as the Russian investment in the development of VHF-band counterstealth systems may be,these will be almost completely ineffective against the B–2A Spirit, as its physical size yields effective shaping in
the VHF-band, and the depth of its leading edge absorbent structures is sufficient to remain effective in the meter wavelength bands.The same would also be true of the New Generation Bomber, should it eventually be developed.

Based on the ineffectiveness of meter band VHF counter stealth radar on B-2A which makes it invulnerable to any band of RF that a potential enemy could employ.

Will it will possible that B-2A would have actually entered Russian Airspace or even fly near russian airspace with Russians having no clue if there was an aircraft or not simply because it was undetectable.

Austin wrote:Based on the ineffectiveness of meter band VHF counter stealth radar on B-2A which makes it invulnerable to any band of RF that a potential enemy could employ.

Will it will possible that B-2A would have actually entered Russian Airspace or even fly near russian airspace with Russians having no clue if there was an aircraft or not simply because it was undetectable.

nope the B-2 will still be detected.. the question is "in what distance" , beside I'm not sure that Russian will only relies on VHF Band to detect something stealthy, maybe they will have a new generation of IR based sensor to help balance things out .
GarryB

Indeed, at the Paris airshow a Rapier 2000 unit had no problems getting an IR lock on a B-2 from memory in the 1990s. Annoyed the Americans no end of course, but hints at why all modern Russian fighter designs have IRSTs and BVR IR guided missiles.

You also need to take into account that over the horizon radars tend to see aerial targets at very steep angles so instead of seeing the B-2 front on... where even visually it looks rather smaller, it will see it from above at a fairly steep angle.

The Russians have radars that track paint chips in space so there is not too much question about whether they could track a B-2.

I am not suggesting they could track it from takeoff to landing, but detection of a very small RCS target crossing into Russian Airspace would lead to aircraft being sent to investigate and when they detected the target with their IRSTs the brown stuff will hit the fan.
IronsightSniper


So, to end this post I'm going to paraphrase Kopp: "IRSTs with QWIPs will have extreme levels of effectiveness over BVR distances against VLO airframes."

A paint chip is not a 1 inch target.
IronsightSniper

I don't think so.

The American military like to compare the RCS of the B-2 to that of an insect, but there are an enormous variety of insects from so small they are hard to see to giants bigger than your hand.

How does a paint chip compare to an insect in RCS terms?

I think it is very relevant.
medo 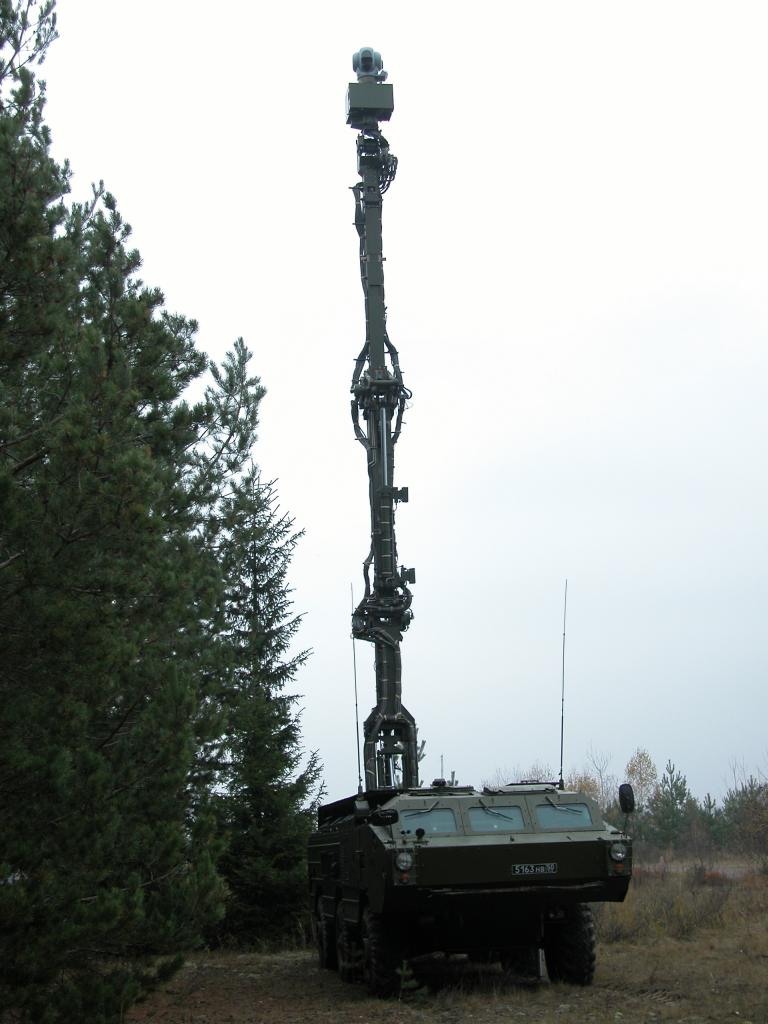 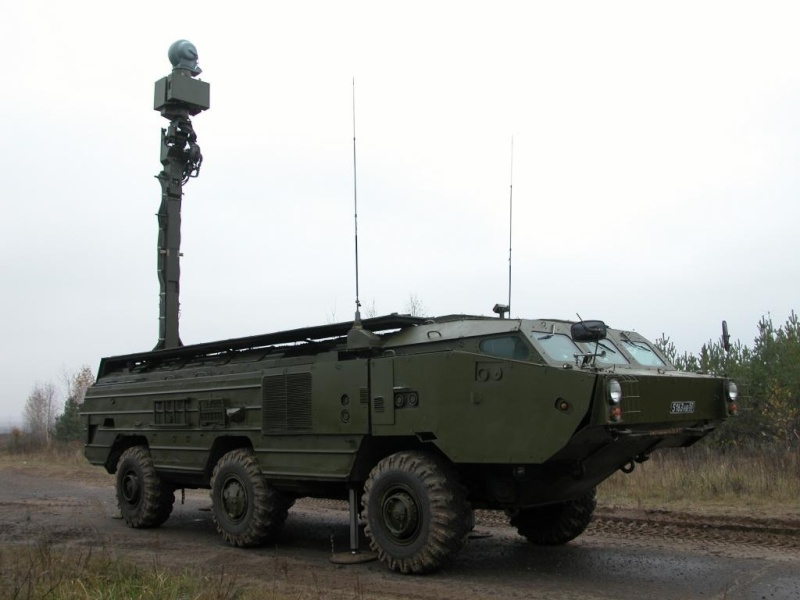 I find pictures of this new recce vehicle equipped with with one of Credo type radar and EO system. Is there any more informationsabout this vehicle? It have army license plates, so this one is from army units.
GarryB

Looks like the base vehicle is the same as used for transportation of the Tochka tactical ballistic missiles (9P129).

Its internal capacity to store ballistic missiles should make plenty of room for the folding arm.

The basic vehicle should have rather good cross country performance and be fully amphibious, but otherwise I know little about this new application for the vehicle.

The Credo-1E system has a rather different appearance and is a radar system while this system seems to have an optical ball turret.
The Credo system has variants mounted on modified BTR chassis and MT-LB chassis but I have never seen it on the 9P129 before.

The large square box below the ball turret probably contains mechanical stabilisation equipment and probably a gyro and likely does not contain a radar, so I would think this is not a Credo system at all... in the sense that Credo is a radar system, like Fara.

The recon model of the BMP-1 and the BMD-1 has optics and a radar mounted in the turret... perhaps this is part of the replacement for those vehicles with the optic component likely radically improved.

Just looking at the vehicle itself I was going to suggest the possibility of it having two arms one with optics and one with radar, but looking at the size of the folding arm at max extension in the top photo I rather doubt there is room. With a top quality thermal imager like Thales Catherine sight it is likely this system has a similar detection range to the Credo radar against some targets. If it contains a quality digital TV camera with high zoom it should offer excellent performance. Park it in the middle of a forest and poke the sensor ball above the tree line... any threat and you can drop the arm and move... artillery fire is much less effective within a forest as the trees absorb fragments and reduce blast effect.

The vehicles that normally carry Credo are used for spotting enemy artillery and calculating the origin of fire for counter-battery "attention". This vehicle could perhaps perform the mission based on the visible signature of a launch/attack, but maybe it will operate with a radar vehicle too.

Interesting photos though. Thanks.
medo 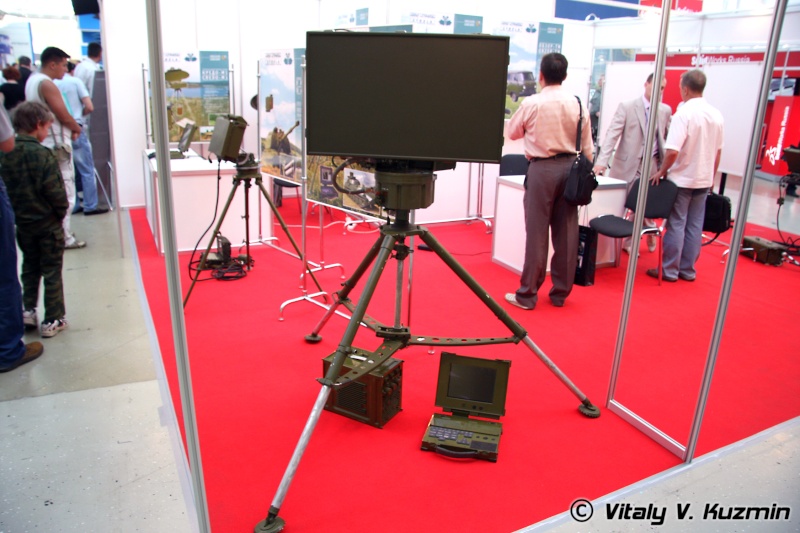 So perhaps this is PDP-4A?

Presumably they are all based on the same vehicle with different packages at the end of the arms and different electronics in the vehicles.
Vladimir79

I don't find that to be a very sensible recon asset. It was designed to pull up well behind the front line and launch missiles, not go behind enemy lines and scout. That ZIL chassis is know for its lack of off-road mobility.
GarryB

I guess if they plan to operate it down roads in forests or amongst buildings or thick bush then you have a recon sensor popping up from nowhere with little chance of engaging the actual vehicle.

The radar models would be used to detect and track incoming artillery fire and determine their source. I expect the electro optics model will be used for passive detection of things like helos and low flying aircraft without a huge risk that the vehicle could be attacked except from directly above.

I would think a UAV might be better but from the information I posted below these vehicles are for air artillery. Would that mean air defence artillery?
The mention of audio recon I suppose could allow the vehicle to detect a tank division by its engine noise or aircraft.

Maybe they improved the vehicles cross country performance, but with road mobile units I think working in pairs will be needed in some areas just to ensure you have a vehicle to help you out of deep mud or deep snow if you get stuck.
medo

I find some info about this recce vehicle. It is artillery recce vehicle Kredo-1S 1L269 for ground and low flying target recce and artillery fire directing.

Unfortunately it's in Russian, but this source write, it have Kredo-1 radar with range of 35 km to detecting tanks and 15 km to detecting man and EO complex with TI, TV and laser range finder. It was accepted in army in 2007.

It is also mentioned in this article.

Unfortunately that radar has a hard time distinguishing men from vegetation.
Austin

Vlad or any body can identify these new radars ?

I have identified two based on some discussion.

Maybe this could be a battery radar for Pantsir-S1. It's placed on the same Kamaz truck and is in desert colors, what make good association, because Pantsir is always showed in desert color.
Austin

####
I have seen a picture before but not the description. It is the L-band acquisition radar for standalone batteries of the Pantsir S1 / SA-22 - yes it is a proper full AESA design using technology from the VNIIRT Gamma DE series C
####

This is clarify what those radars are for.
GarryB

They seem to be expanding the number of radars in the L band range... I suspect that with the use of L band wing mounted radar in T-50 and Su-35 and perhaps Mig-35, (though I have not got confirmation of the latter I suspect they could use it too), that the Russians believe it might be useful... at least against LO fighters like Rafale and Typhoon, and also perhaps the F-35 and even F-22.

This makes ground based mobile radars as this very interesting... especially with Pantsir-S1s operational ceiling variably described as 10,000m and 15,000m, as the latter would probably mean that for normal operations the F-35 will not be able to fly over a Pantsir battery.

This anti stealth role is also useful for Pantsir as it does not rely on radar guidance or terminal homing, and has not forward facing optical ports so DIRCMs on the target will have a hard time stopping the missiles.
medo

I wonder if those first Russian Pantsir-S1 batteries have those battery radars or only command posts. I think this AESA radar will be very hard to jam and even if it is jammed, CP could share picture with other radars from IADS and deliver targets to Pantsirs. Pantsirs could work all the time passively. With guns, they are impossible to jam. For missiles, they could jam only guidance signals, what is very hard, because target is not between missile and launcher and guidance signal have very thin angle and very high power so it practically could not be jammed.
GarryB

I wonder if those first Russian Pantsir-S1 batteries have those battery radars or only command posts.

I would expect that only batteries operating on their own would use this sort of radar, though it might be included as part of an anti stealth addition for use with older S-300 systems.


I think this AESA radar will be very hard to jam and even if it is
jammed, CP could share picture with other radars from IADS and deliver
targets to Pantsirs.

Jamming an L band radar would be difficult... for the same reason it is rather hard to jam datalinks... many of which operate in the L band.
Austin

I think in an intense jamming environment with liberal use of Anti-Radiation Missiles these AESA radar would be eventually jammed with different jamming options like DRFM Jamming to Brute force options.

It would be wise move to invest in non-RF mode of such system like Pantsir ,BUK ,S-300/400 and every other system out there , invest in advanced EO, IIR Tracking and guidance , multichannel IR tracking and it should be part of any system main Tracking and Guidance radar.

As all the wars of past and libya operation shows all form of RF radar are the first target of NATO/US forces and are taken out with precision , it would be wise to invest in capable and advanced passive mode of tracking and guidance as with AESA system.

Not to say that NATO/US will fight Russia but more to improve Russian Defence and export potential of AD system and give it a cutting edge.
Sponsored content