Seems like we could be seeing some major Russia-Azerbaijan deals in the near future...

"As you know, Azerbaijan - a country with which we have a close relationship, both historical and now. We attach the greatest importance to the development of practical military cooperation with Azerbaijan, "- said S.Goreslavsky agency" Interfax-Azerbaijan ".

He noted that on I Azerbaijan International Defense Industry Exhibition «ADEX-2014" presented Russian company "Helicopters of Russia", "Uralvagonzavod", "Rocket and tactical weapons" and others.

"Rosoboronexport" - the only foreign company that brought full-scale specimens of his art, one of which is a reconnaissance and attack helicopter "Ka-52". He attracted interest from our partners in Azerbaijan and expressed interest to him directly by the president of your country, who was with us, "- said S.Goreslavsky.

"We are pleased to see the actual interest in the car. He also founded, as it seems to us, in two circumstances. The first - is that in service of your country already has helicopters "Mi-35M", as transport and combat, and military transport helicopters "Mi-17V-5." I want to say that because Azerbaijan is already "Mi-35M" and "Mi-17V-5", "Ka-52" would complement this line of helicopters in terms of their effectiveness in the use of combat conditions in the country's defense, "- he said .

Another reason for the "Ka-52" may be the best value for Azerbaijan, that, according to S.Goreslavskogo, all of its components are manufactured in Russia.

"The second thing that characterizes this helicopter: it is completely manufactured in Russia. All components are manufactured in Russia. In today's world, as you know, is a very serious impact on the delivery of a sanctions regime. We are now experiencing the impact of sanctions by Western countries, and where it is necessary to pursue a policy of substitution. But this does not apply to the "Ka-52" and many other weapons systems that are in service with the Russian army. Initially the principle was such that all components must be manufactured in Russia. Therefore, we are not dependent on supplies for their own army of other countries, "- he stressed.

"So it will be very profitable acquisition, including Azerbaijan, which is actually independent, taking into account the strategic partnership relations between Baku and Moscow" - added S.Goreslavsky.

According to him, "Rosoboronexport", organized presentation of aviation equipment of the Russian Federation for their Azerbaijani partners.

"We have had a great presentation for the local partners of aeronautical engineering with an emphasis on the" Ka-52 "and other helicopters and Russian-made aircraft. In particular, we have great expectations for this market promotion and training and combat aircraft "Yak-130", - he said.

S.Goreslavsky noted that the Azerbaijani specialists of aircraft are often interested in "Yak-130".

"According to preliminary estimates of your staff, this plane is of great interest to the aviation of Azerbaijan. He is in great demand in the world now, because combines advanced training aircraft for any brand is not only Russian aircraft production, but also American, French, and others. And at the same time it is air-combat platform ", - the representative of the deputy director of" Rosoboronexport ".

In addition to aviation, according S.Goreslavskogo, Baku is interested in the heavy armor.

"Here (in the exhibition - IF-Az), along with the" Ka-52 ", was introduced and the full-scale specimen combat vehicle" BMPT-72. " In general, we have held with Azerbaijan (in the past - IF-Az) contracts for the supply of tanks "T-90", "BMP-3", "BTR-82A", flamethrower systems of various types and other military equipment. We look forward to our continued cooperation, as it started a very successful and dynamic development, "- he stressed.

Baku and Moscow, according S.Goreslavskomu, negotiate and modernization of tanks "T-72".

"We are in talks on the modernization of tanks" T-72 ". We are now at the beginning of the way, show the possibilities and look forward to their implementation in the future "- said S.Goreslavsky

The Azerbaijani and Russian defense ministries signed a cooperation plan for 2015 in Baku Oct. 13.

The document was signed by Azerbaijani and Russian Defense Ministers Zakir Hasanov and Sergei Shoigu.

“The document envisages the military-technical cooperation, joint military exercises and training of qualified personnel in the field of defense,” Hasanov said at the signing ceremony.

According to the plan, in 2015 Azerbaijani servicemen will be sent for training to the Russian military schools, while Russian servicemen - to the corresponding schools of Azerbaijan.

"Special attention is paid to the regional security, in particular in the Caspian Sea,” he said. “According to the plan, the joint military exercises – command-staff and strategic will be held between the Navies of Russia and Azerbaijan in 2015."

“According to the plan, Azerbaijan is expected to purchase the Russian-made modern military weapons and equipment in accordance with the state program on providing the army with weapons,” he said.

Shoigu thanked his Azerbaijani counterpart for the invitation. He said that Azerbaijan and Russia established very strong partnership in all spheres, particularly in the military area.

"High-level meetings held in Astrakhan and Minsk testify to this,” Shoigu said.

He expressed the hope that further cooperation will be also fruitful and the signed plan will be the basis of this cooperation.

"only in the period from 2010 to 2012 were awarded contracts totaling about $ 4 billion, and the total supply of weapons through a special exporter of arms "Rosoboronexport" in Baku by the end of the year could reach about $ 5 billion." 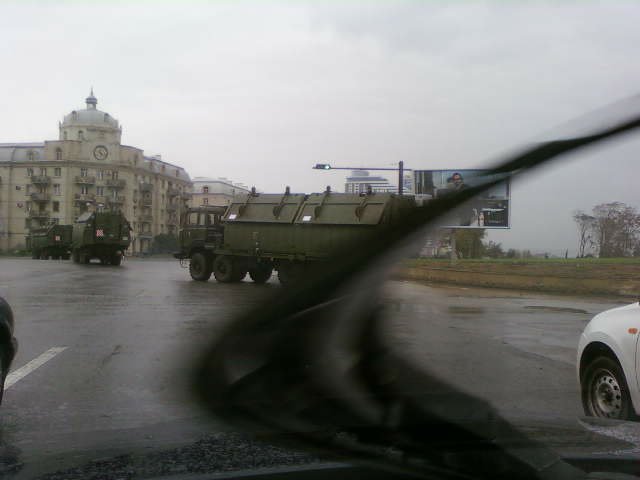 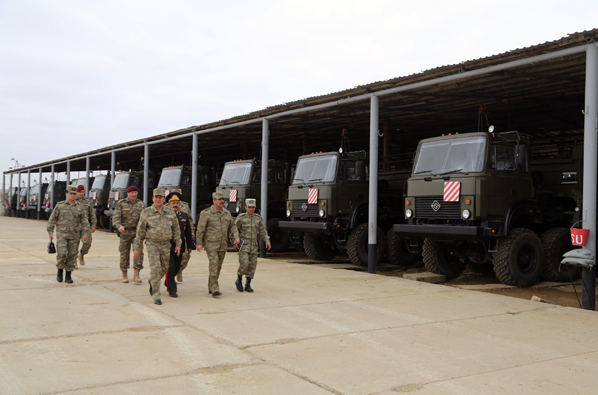 Is Azerbaijan interested in the BMPT at all?
AttilaA

In the words of Sergei Goreslavsky: "The two sides are negotiating over joint modernization of T-72 tanks."

Nice ... some % of this contract is also done by Russia

So Russian-supplied MANPADs have been used to shoot down the helicopters of Russia's CSTO ally. Not even NK choppers, but Armenian helicopters proper by various reports.

Armenia has nowhere else to go but with Russia for the moment anyway. But if Turkey should leave NATO a few years down the line, then that would open Armenia for a lot more co-operation with NATO, EU & the US than now - and Russia will only have itself to blame if it looses it.
AttilaA 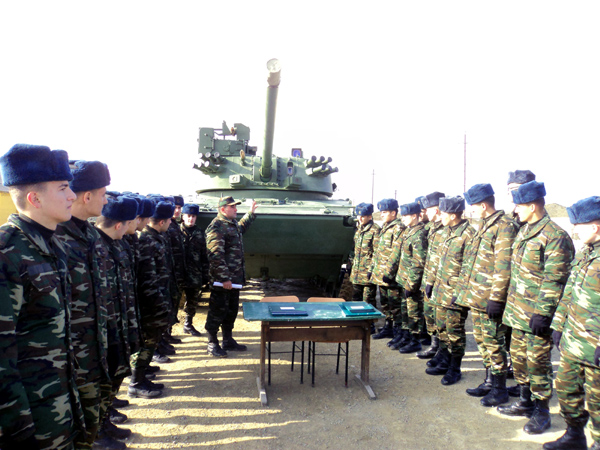 Uralvagonzavod has offered the creation of a service center in Azerbaijan (for tanks, bmps and other types of armored vehicles supplied by Russia).

A service center for helicopters are also planned (and was discussed at ADEX 2014).
AttilaA 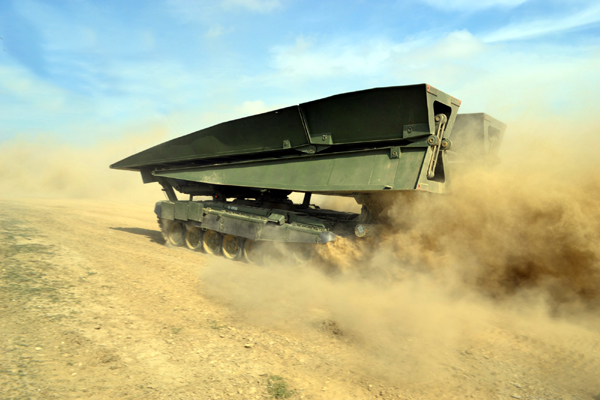 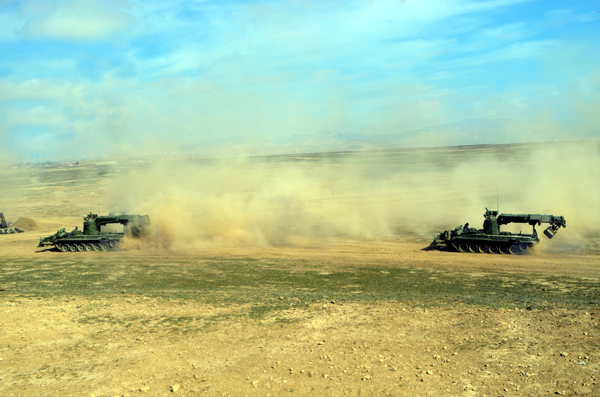 Azerbaijan has ordered "Berezhok" combat module for BMP-1 and BMP-2s.

flamming_python wrote:So Russian-supplied MANPADs have been used to shoot down the helicopters of Russia's CSTO ally. Not even NK choppers, but Armenian helicopters proper by various reports.

Armenia has nowhere else to go but with Russia for the moment anyway. But if Turkey should leave NATO a few years down the line, then that would open Armenia for a lot more co-operation with NATO, EU & the US than now - and Russia will only have itself to blame if it looses it.

TUrkey leaving NATO? Sure. NATO leaving Turkey? I guess that's the kind of trade-off, Russia DREAMS every night and day. Turkey dropping the NATO pretense also makes Greece far more secure, (IF you link them with Turkish Stream). So yeah, Turkey going out NATO; where does VVP sign?

Turkey won't be able to leave NATO. US has nuclear weapons on turkish soil, just like in germany and netherlands. The US has a protocol if it ever losses control over germany in a manner that they could not bring germany back under US hand even with their color or bloody coup de etats so this protocol is there to initiate the nukes.
AttilaA

According to "Azeridefence" quoting KBM at "Armiya-2015" arms expo, Azerbaijan has received the first batch of Khrizantema-S.

Nice, any idea how many are on order?

mack8 wrote:Nice, any idea how many are on order?

Russia discusses with Azerbaijan delivery of helicopters and armored vehicles

Russia and Azerbaijan are in talks to supply to Azerbaijan of Russian military equipment, said the agency Rambler source in the military-industrial complex at the XV session of the intergovernmental commission between the two countries.

"Supplies (of military equipment to Azerbaijan. - Rambler) are discussed, but in the closed mode", - said the source, adding that the talks are supplies to Azerbaijan Russian helicopter and armored vehicles.

Azerbaijan is interested in the acquisition of new patrol ships of the project 22500, told RIA Novosti on Tuesday, chief of bureau of foreign economic activities of the Northern Design Bureau Dmitry Kurochkin.

"At the Naval Show in St. Petersburg, we had a great conversation with the representatives of Azerbaijan, are very interested in this ship," - said Kurochkin.

He added that the project 22500 is that there is only "on paper", but is already causing serious interest among potential customers due to the high modernization potential.

"With its small displacement - about 1,000 tons - it can be fitted on request almost any set of weapons," - said Kurochkin.

That would be interesting if indeed purchased. May actually give other countries ideas to purchase it and even Russia.

Any news if Azerbaijan is interested in upgrading their T-90's to new standard?
George1