The contract is already being implemented and is expected to be fulfilled within a year or two, he said.

Rosoboronexport official Vyacheslav Davydenko denied the report on Thursday, saying no such contract existed. Azerbaijani President Ilham Aliyev's spokesman, Azer Kasymov, said he has no information on the issue, the paper said.

The deal, worth at least $300 million, is the most expensive single purchase of weapons by a former Soviet state, excluding Russia, Mikhail Barabanov, the editor-in-chief of the English-language Moscow Defense Brief magazine, told Vedomosti. Russia has also sold S-300 missiles to Belarus and Kazakhstan, but these deals were much cheaper.

Outside the post-Soviet area, Russia has also delivered S-300 air defense systems to Algeria and China. In December 2005, Moscow signed a contract on supplying Iran with at least five S-300 systems, but the contract's implementation has so far been delayed.

Until the 1990s, Azerbaijan had had one of the most advanced air defense systems in the Soviet area, Vedomosti said. However, these systems have since become obsolete.

A Russian Defense Ministry officer said the purchase of S-300 missiles would unlikely change the balance in relations between Azerbaijan and neighboring Armenia, which have been at odds for almost two decades over the breakaway region of Nagorny Karabakh. None of the countries has modern fighter jets, cruise or ballistic missiles which S-300 air defense systems are designed to intercept.

The officer told the paper Azerbaijan was rather trying to assure its security in case of aggression from Iran.

Azerbaijan has been actively modernizing its military sphere, including the purchase of weapons from Ukraine, Belarus, Israel and South Africa, the head of the Russian Center for Analysis of Strategies and Technologies (CAST), Ruslan Pukhov, told Vedomosti. If Moscow did not supply modern air defense systems to its former Soviet neighbor, then either South Africa or Israel would have done it, he said.

17:47 29/07/2010 MOSCOW, July 29 (RIA Novosti) - There is no truth to reports that Russia has agreed to deliver S-300 air defense systems to Azerbaijan, Russian state arms exporter Rosoboronexport said on Thursday.

"There is no contract between Russia and Azerbaijan on the delivery of S-300 air defense systems to this country," a Rosoboronexport spokesman said.

Rosoboronexport official Vyacheslav Davydenko denied the report, while a spokesman for Azerbaijani President Ilham Aliyev said he had no information on any sale.

Vedomosti said the contract was worth $300 million, which would have made it the biggest single purchase of weapons by an ex-Soviet state. Russia has previously sold S-300 missiles to Belarus and Kazakhstan.

Outside the post-Soviet space, Russia has delivered S-300 air defense systems to Algeria and China. In December 2005, Russia signed a contract on the delivery of at least five S-300 systems to Iran, but delivery has so far been delayed. In June, Russia said it would freeze the delivery due to a fourth round of UN sanctions against Iran over its nuclear program.

The advanced version of the S-300 missile system, called S-300PMU1, has a range of over 150 kilometers (over 100 miles) and can intercept ballistic missiles and aircraft at low and high altitudes, making it effective in warding off air strikes.

We won't ever sell something to Azerbaijan that gives them the advantage against Armenia, not until they forget NK.
SOC

...and there went the Armenian air threat.
GarryB

Pretty sure if the Russians sold it to them it probably had strings attached.
SOC

Probably. Or the Azeris could've been the ones pulling the strings, given that they host a Russian Daryal LPAR site.

At the same time there where some info about Armenian S-300 system. Not sure if correct but could be to regain parity. By selling more advanced arms to both nations Russia could be raising stakes in possible future conflict in the form of civilian casualties but at the same time delaying its beginning due to same reason and earning money.
SOC

The difference is that Armenia received refurbished ex-Russian S-300PT and S-300PS systems. Far less capable than the Favorit.

Of course, they'd likely argue that selling defensive weapons of this caliber to both sides helps to reduce the likelihood of any future conflict. I wouldn't disagree with that statement, given that they're selling S-300Ps and not old refurbished S-75s or S-125s.
GarryB

Probably. Or the Azeris could've been the ones pulling the strings, given that they host a Russian Daryal LPAR site.

The Russians have built a few new radars inside Russia that are both more modern and more efficient in using much less power...

I don't think that string is tied to anything substantial...

I would think the new Space and Air Defence Forces will want such radars under their direct control on their soil rather than located in otherwise unfriendly foreign countries.
AttilaA

Correct me if wrong, but isn't it 2 batallions and not 2 batteries? 2 batallions equals to 8 batteris or 32 launchers.
Viktor

Azerbaijan is a major client of Russian weaponry and this new deal is also interesting.

Excellent blog post SOC. Good to have you back.

AttilaA wrote:
Correct me if wrong, but isn't it 2 batallions and not 2 batteries? 2 batallions equals to 8 batteris or 32 launchers.

Nope it was 2 batteries. There are some stories circulating around about possible purchase of two more batteries.
AttilaA

Are those TELs near 96L6E in "Southern Battery"? Or are they something else?

About the 40V6, do you think is it like in the configuration shown below, incorporating 96L6E radar? 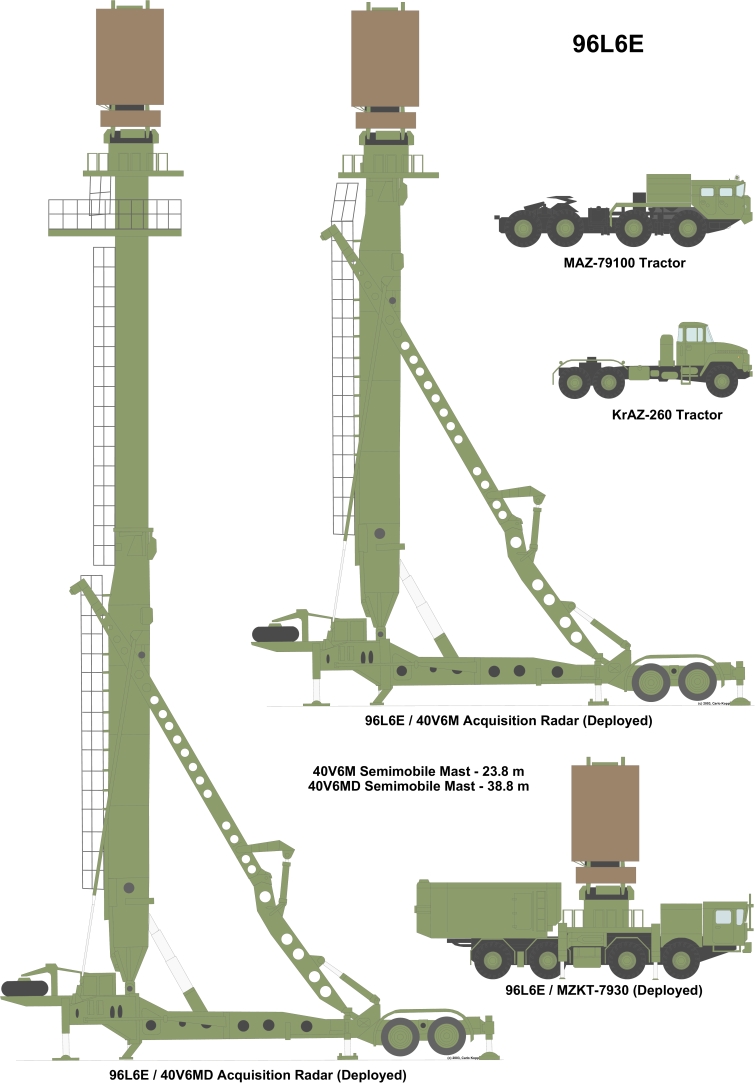 Also, there are these images. It seems like a different location, what do they show exactly?

AttilaA wrote:Are those TELs near 96L6E in "Southern Battery"? Or are they something else?

Right next to it there are a pair of power units and a pair of what are probably fuel trucks.

AttilaA wrote:About the 40V6, do you think is it like in the configuration shown below, incorporating 96L6E radar?

AttilaA wrote:Also, there are these images. It seems like a different location, what do they show exactly?

Thanks for your reply.
AttilaA

So much for Oplot, haha.
Viktor

So much for Oplot, haha.

Ukraine has been ousted in Peru too.
AttilaA

BMP-3 and Msta-S will be also displayed at the military parade.

200 tanks is a big contract for today's standards. As I have mentioned in other posts, Ukraine really has a big problem when it comes to serial production of tanks. Is Russia likely to supply more weaponry to Armenia to keep the balance in the region?
AttilaA

All of the equipment new, or anything bought used from non-Russian sources?
AttilaA

Impressive how we did not hear very much about this until the vehicles all appeared in the country. I guess they can keep a secret if they want to still.