That is not really true...

There were plenty of new designs in the Soviet Union... it is just that we never heard about them.

The AK-74 is a case in point... the west simply believed that the AKM was replaced with a smaller calibre model with a few minor refinements.

It is now known there were plenty of alternative designs... some quite radical that failed to win but that did not mean they did not exist...
Guest

kvs wrote:People have forgotten how painful it was for the USSR to churn out new vehicle designs.   These days they sprout
like mushrooms and too many assume that it was always this way. 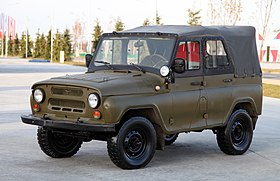 This is all there was during the 1980s.  Nice to see Russia has the flexibility to test out new vehicle types and fill
the gaps.

With a small difference i would actually rather pick Uaz 469 than this. Uaz is a workhorse, donkey.
eehnie

kvs wrote:People have forgotten how painful it was for the USSR to churn out new vehicle designs.   These days they sprout
like mushrooms and too many assume that it was always this way.

This is all there was during the 1980s.  Nice to see Russia has the flexibility to test out new vehicle types and fill
the gaps.

The effort today creating small semiarmoured vehicles maybe too big. I think it is more an effort of the contractors to offer a small armoured solution, but all them are having problems with the tests and are not being finally delivered. They are fairly better than the precedents, but not reaching the current standards for combat vehicles.

All them seem to be under the BMD-4M/BTR-MD and the Typhoon-K/Typhoon-U 6x6, that passed the tests fairly well and fast. In my view these 4 vehicles would be the right basis for the Airborne Troops, for the Naval Infantry, and for special military forces that need vehicles smaller than the Kurganets and the Boomerang.

All these smaller vehicles can have a place for the non military security forces and as small transport/utility vehicle for out of contested areas in the military forces.

MOSCOW, May 16. /TASS/. Russia’s Military Industrial Company has started developing a new generation of the Tigr (Tiger) armored vehicles, with the first model likely to be rolled out in 2018, the company’s CEO, Alexander Krasovitsky, told TASS.

"The development of the next-generation Tiger armored vehicles has been launched. The Defense Ministry has welcomed this project and has earmarked funding for it," he said.

According to Krasovitsky, the company’s engineers are now working on sketches for the new "Tigers".

"I think we will see this vehicle next year ‘in the flesh’," he added.

Earlier Krasovitsky told TASS that the new vehicle will have a heavy-lift capacity and a V-shaped undercarriage and more comfortable seating for the combat crew and landing troops. The vehicle will also get Class 1, Class 2, and, over time, Class-3 protection under the common technical requirements.

As reported on May 16, 2017 by the agency TASS, development work to create a new generation of armored vehicles "Tiger" is open, the first sample can appear in 2018. This was reported by Tass General Director of the Military Industrial Company Alexander Krasovitsky.

"The development work for developing a new generation of" Tigers "is open, the Ministry of Defense approved this work and allocated funds for it," he said.

Russia’s Defense Ministry is considering the program of the trials of the Tigr unmanned armored vehicle equipped with the 30mm gun, CEO of Russia’s Military and Industrial Company Alexander Krasovitsky told TASS. 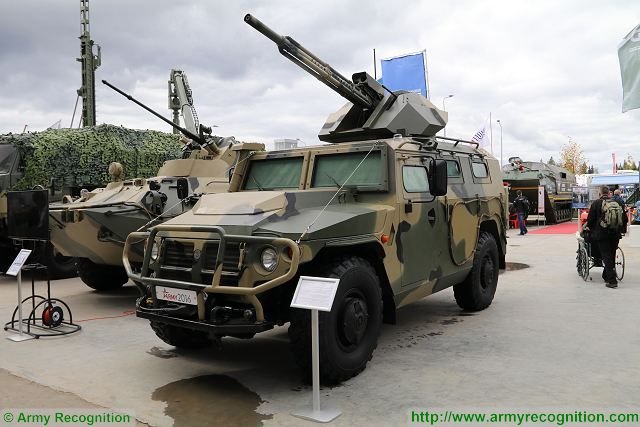 VPK's unmanned Tigre 4x4 tactical vehicle unveiled at Armya 2016 exhibition in Russia​
The Military and Industrial Company is the developer of the Tigr unmanned armored vehicle, he added.

When the program is agreed upon, the company will sign contracts with organizations where the vehicle will be tested, he added.

"Trials are a complicated process that requires considering lots of details for an objective result. It is too early to set the timeframe but we should complete them [the trials] as quickly as possible," Krasovitsky said.

Earlier, the CEO told TASS that the company had developed a remote-controlled version of the Tigr armored vehicle.

The Company VPK has developed the armoured vehicle in conjunction with JSC 766th Department of Engineering and Manufacturing Complement (Russian acronym: UPTK, Upravlenie Proizvodstvenno-Tekhnologicheskoi Komplektacii) as per the Russian Ministry of Defense`s (MoD) order.

The design and the fire control system of the Tigr vehicle’s combat module are similar to that of the Uran-9 robotic system’s automatic remote-controlled combat module with the 30mm gun. 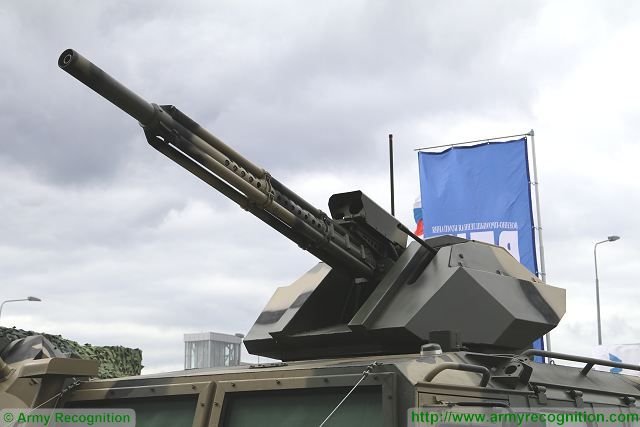 The 2A72 30 mm gun fitted on the unmanned Tigr vehicle
"The RCWS (Remote Controlled Weapon Station) mounted on the new modification of the Tigr vehicle is unified with the remote controlled turret of the Uran-9 unmanned combat ground vehicle (UCGV) developed by the 766th UPTK. Both modules are armed with a 2A72 automatic cannon chambered for 30x165mm round as the main weapon," said the Director General of VPK, Alexander Krasovitsky. "VPK has become the first defense enterprise in the world to integrate a 30 mm automatic cannon with a lightweight two-axle LUV with a combat weight less than 9 t, while retaining the vehicle`s maneuverability and cross-country capacity.", he added.

The unmanned variant of the Tigr LUV is based on the VPK-233115 Tigr-M SPN Special Purpose Automobile (Russian acronym: ASN, Avtomobil Spetsialnogo Naznacheniya) also developed by the Military Industrial Company.

The vehicle can be used for combat-reconnaissance operations, fire support missions, and convoys. The main armament can destroy light and medium armoured vehicles on the modern battlefield.

The 2A72 30mm automatic cannon can also be used as anti-personnel and anti-armour weapon. 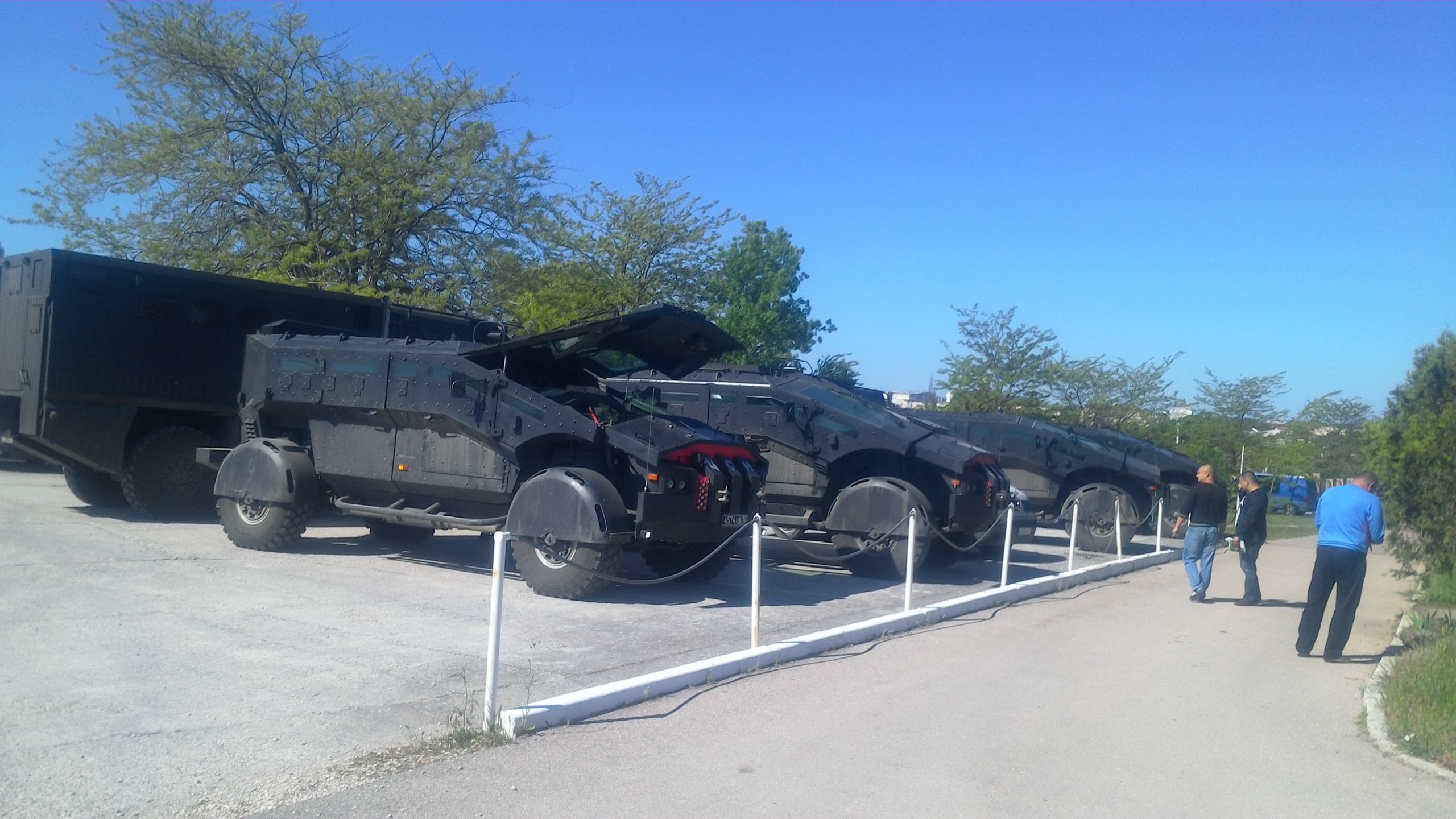 For FSB not the Army
Arctic_Fox 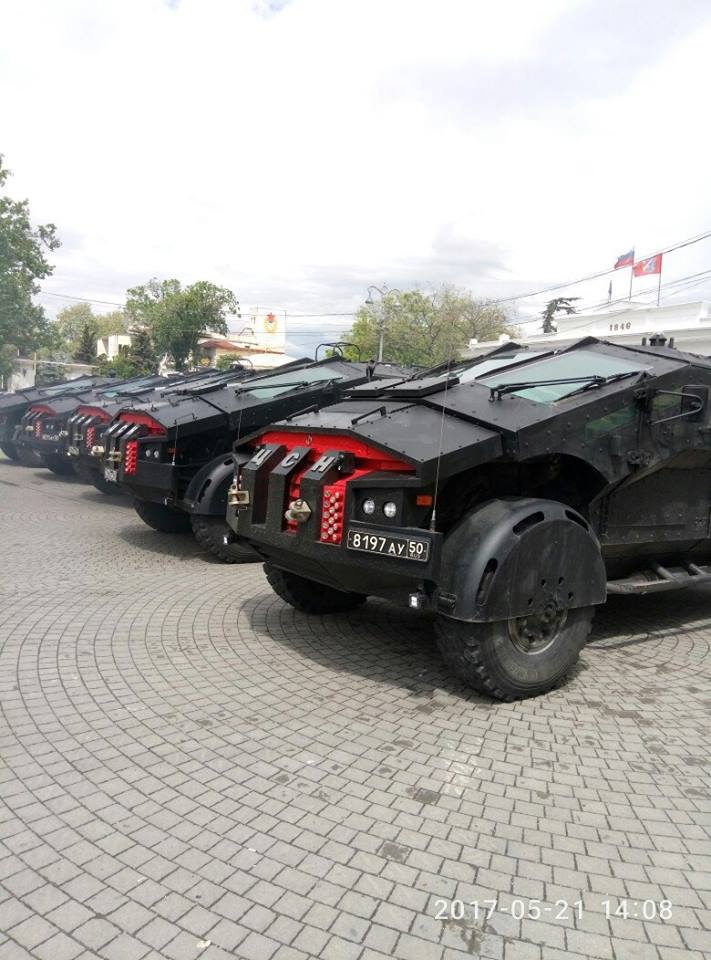 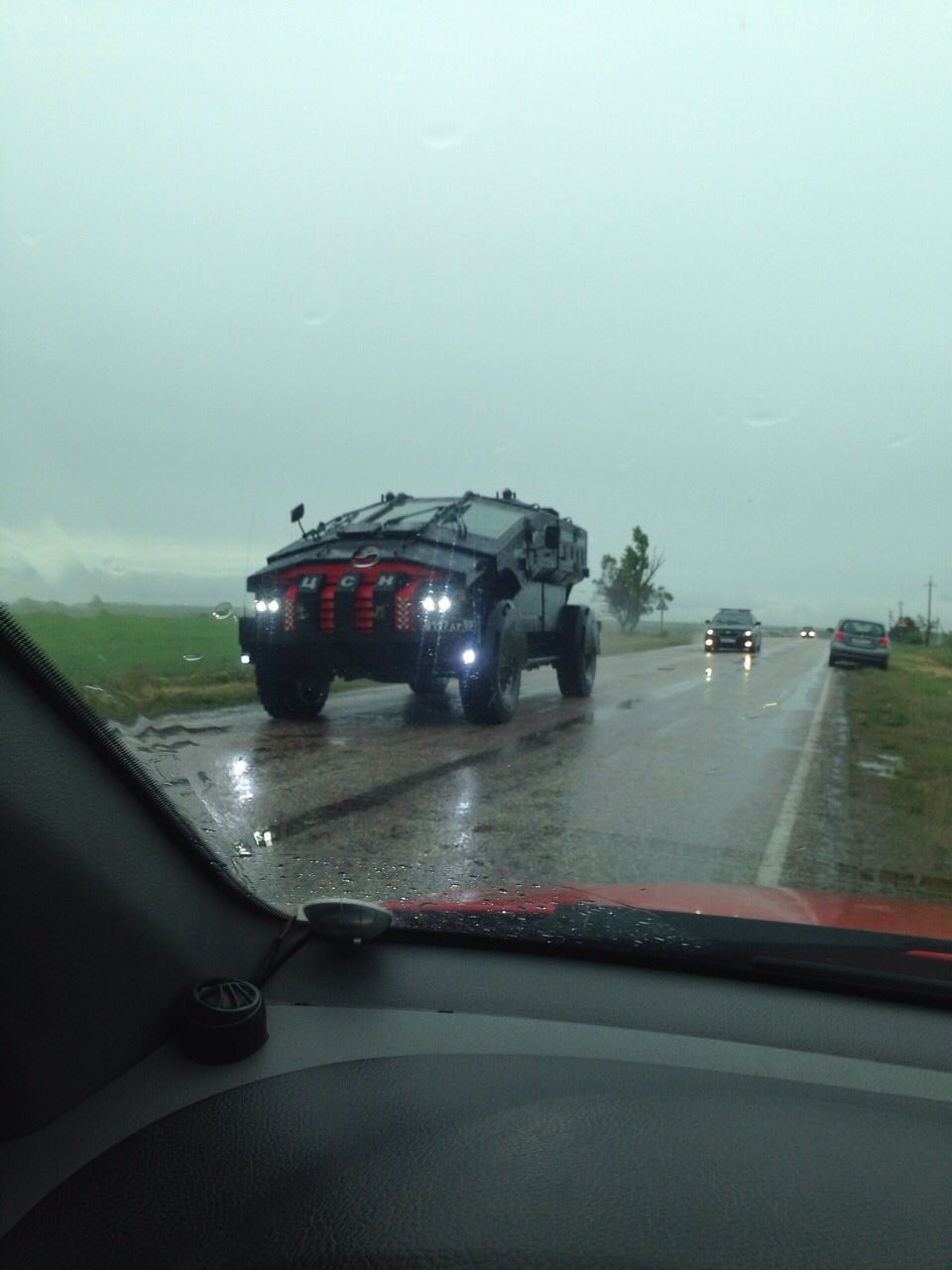 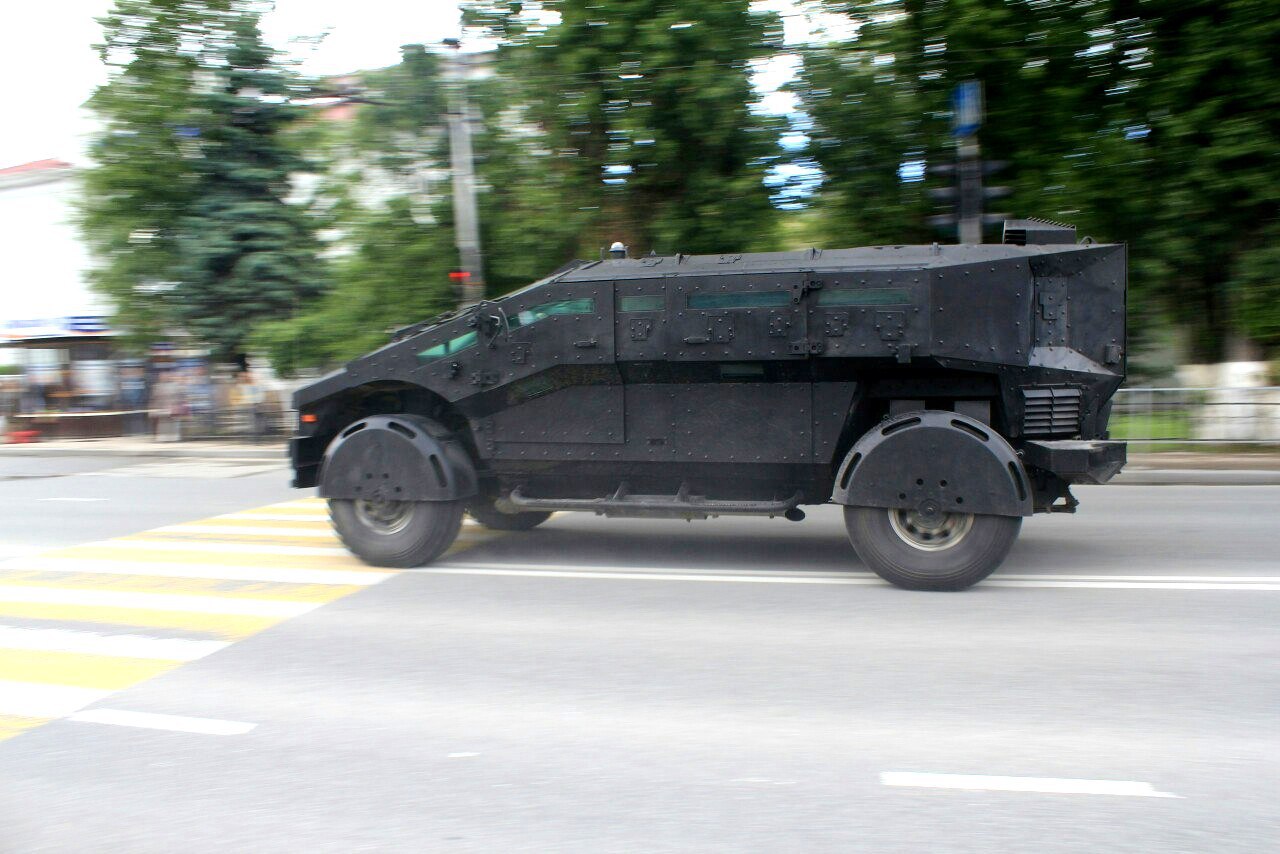 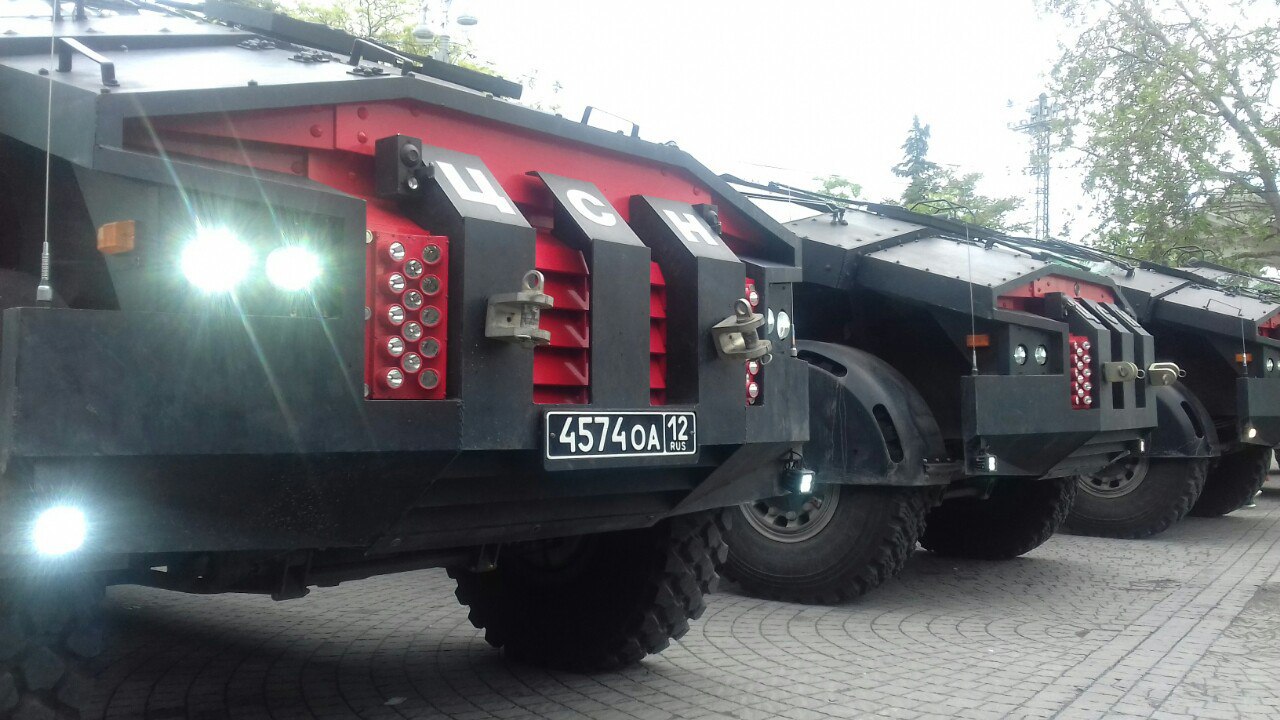 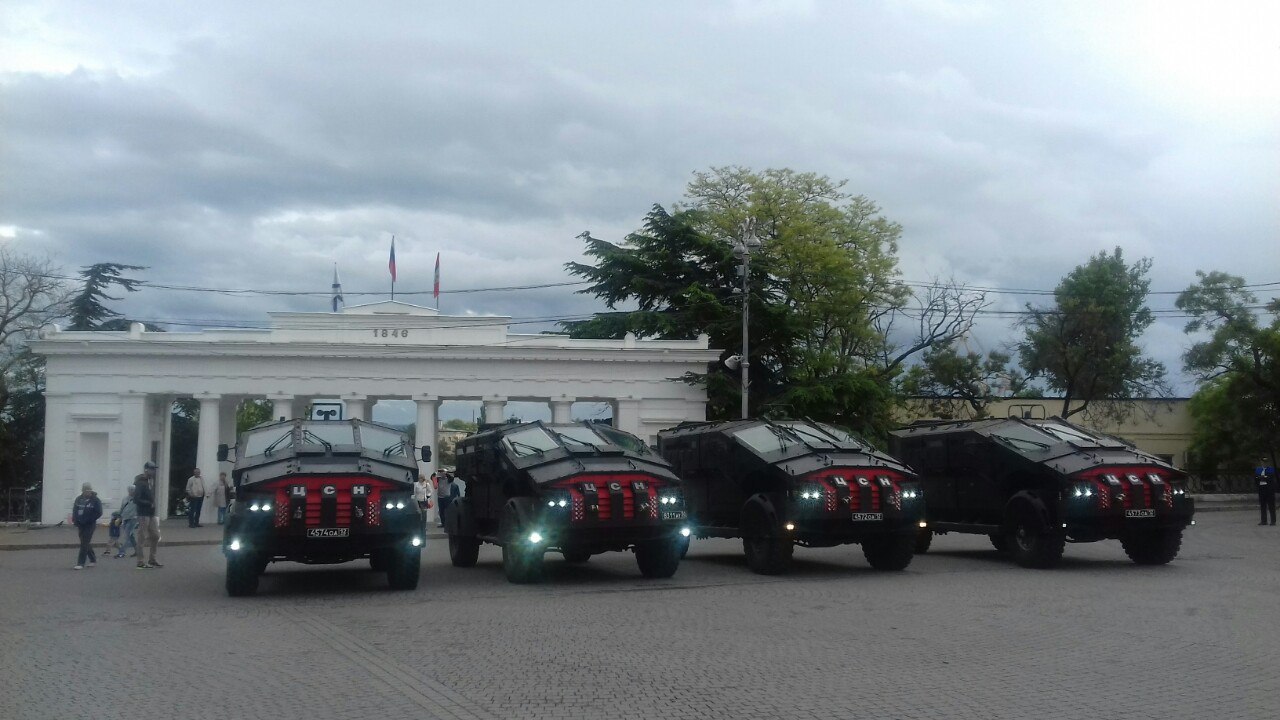 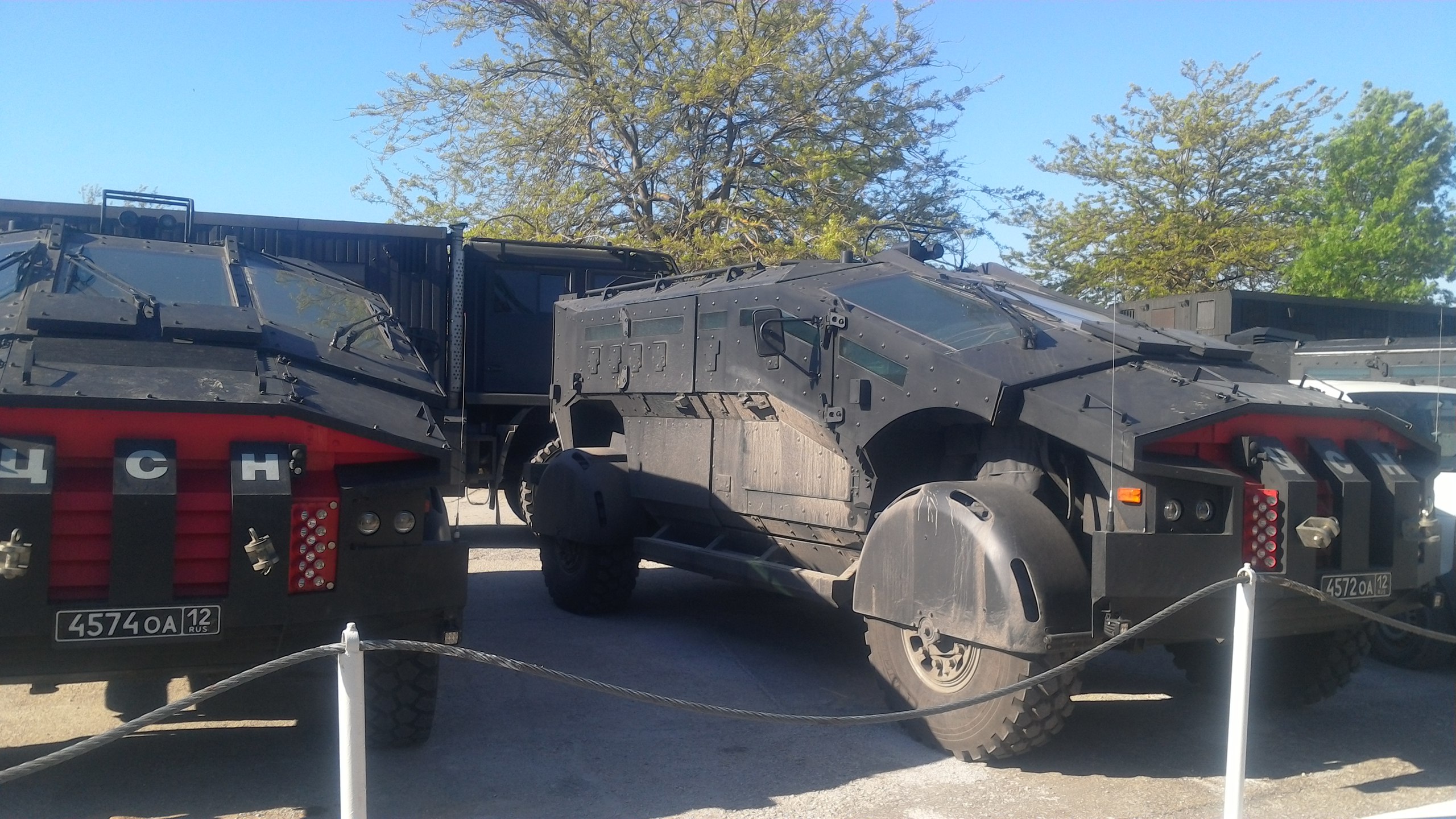 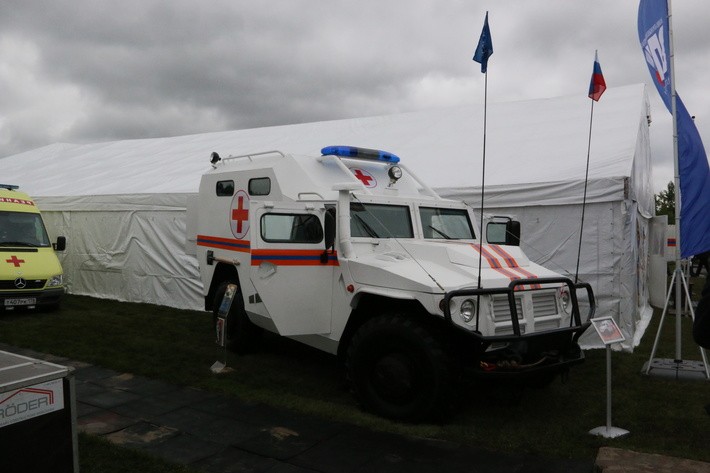 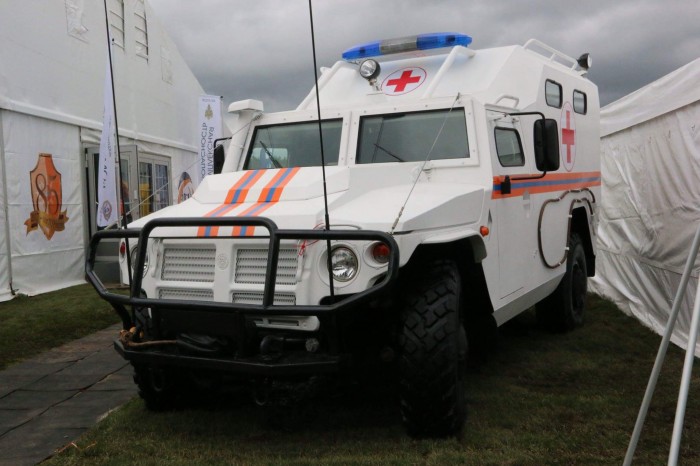 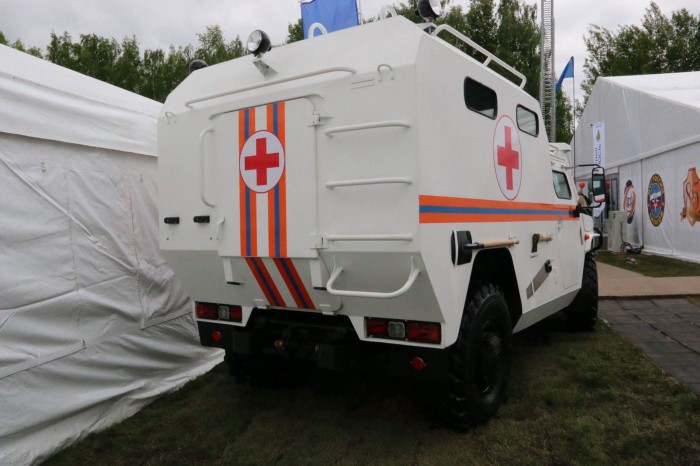 I believe this wasn't posted yet. It is a compilation of Russian armoured vehicles.

As reported on July 5, 2017 by the Department of Information and Communications of the Ministry of Defense of the Russian Federation, during the active phase of the command post exercise with units of the Airborne Forces in the Pskov region, the newest P-230T control vehicle based on the Tiger , Allowing to provide the control point of the airborne commander with a secure communication in the videoconference mode with the commanders of battalions and divisions on the battlefield.

The control vehicle entered the Airborne Forces of Russia in June 2017. It is equipped with modern telecommunications equipment and allows secure telephone, video conferencing and electronic correspondence not only in the parking lot, but also in traffic. 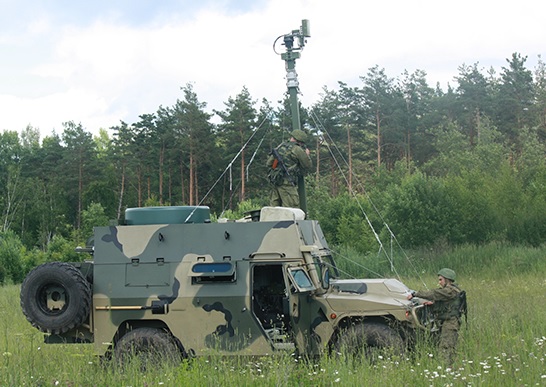 The automated workstations in the newest control machine enable the Airborne Force Command to see the operational situation in the task area in real time, and the unit commanders to promptly transmit to the higher headquarters information about the change in the situation.

The doctrine with the units of the Ulyanovsk and Ivanovo formations are conducted in cooperation with the servicemen of the Pskov Airborne Division with the practical landing of military equipment and personnel parachuting on unfamiliar landing areas. The main task of the landing units in the north-west direction is to resolve the educational situation of an emergency and anti-terrorist nature by force. In the training conducted in accordance with the plan of combat training of the Airborne Forces, more than 40 aircraft and helicopters of the Russian Air Force, Air Force and Air Defense of the Western Military District are involved.

During the exercise, the paratroopers flew to the places of accomplishment of tasks, conducted airborne assault from personnel and vehicles in various ways, seized airfields and objects of the conventional enemy. The landing was made simultaneously at the landing site of the 76th Division and in the vicinity of the military airfield near the island of the Pskov Region.

At MAKS 2017, the AirShow in Russia, Russian defense industry unveils a new 4x4 armoured vehicle called Buran, the vehicle has a new design compared to standard wheeled armoured vehicle with three doors on each side of the hull. 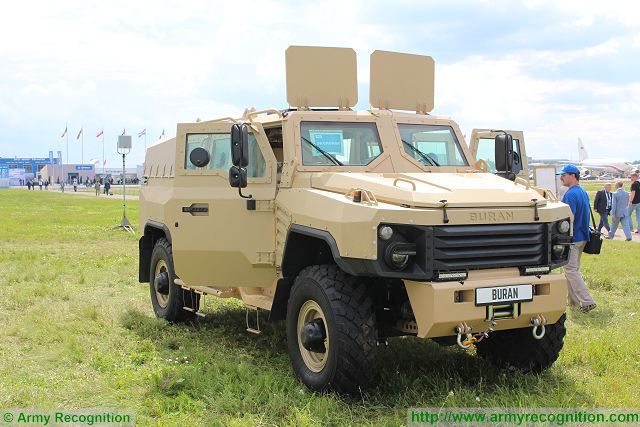 New Buran 4x4 armoured vehicle at MAKS 2017, AirShow near Mosco, Russia, July 18, 2017.
The Buran is manufactured using a non conventional layout, the engine is at the front of the vehicle, the crew and troops compartment are in the middle and there is one cargo area at the rear. There is three doors on each side of the vehicle each with firing port in the middle of a small bulletproof window. There two seats at the front of the vehicle and four at the rear, two on each side facing to the doors.

According to the manufacturer the hull of the Buran provides ballistic protection against firing of small arms 7.62x51mm caliber.

The Buran includes many engine components manufactured by the German Company Robert Bosch Gmbh including a fuel feed system, high-pressure fuel pump, and control unit. The high-pressure pump is responsible for compressing the fuel supplied by the electric fuel pump to the pressure required for high-pressure injection up to 20 MPa (200 bar). 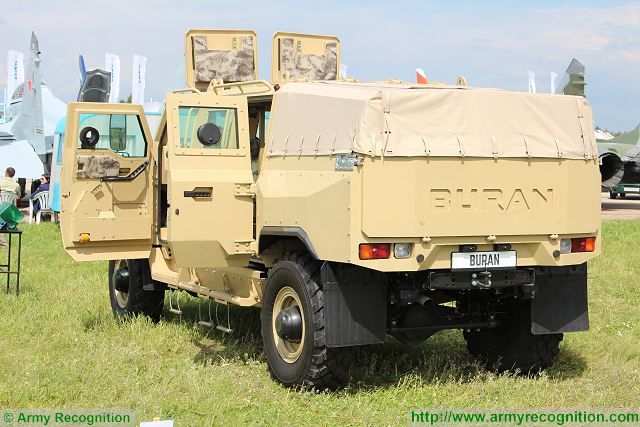 Video promo of Buran. Looks OK but wheel size and ground clearance leave something to be desired. It could easily have same off road performance issues as Rys/Iveco MRAP as a result.

The Buran is manufactured using a non conventional layout, the engine is at the front of the vehicle, the crew and troops compartment are in the middle and there is one cargo area at the rear.

It talks about an unconventional layout, but engine at the front, crew compartment in the centre and cargo area at the rear is very conventional.

The only unconventional aspect is the extra row of seats and three side doors, but it is not that unusual.
T-47

This one reason should be enough for rejection of the vehicle for domestic army use. I think this is only for export. There is no need for another SUV type vehicle right now. Tigr is doing fine.
Regular

Tigr platform can be modified easily to increase protection. Kamaz people also have a good know how so I think the market is saturated already.
GarryB

The Typhoon family of light vehicles really fills any gaps they might have in the light armoured vehicle class...

Sort of a better armoured BRDM-3, but with actual light troop transport and other variations...

Family of cars based on the armored car K-53949 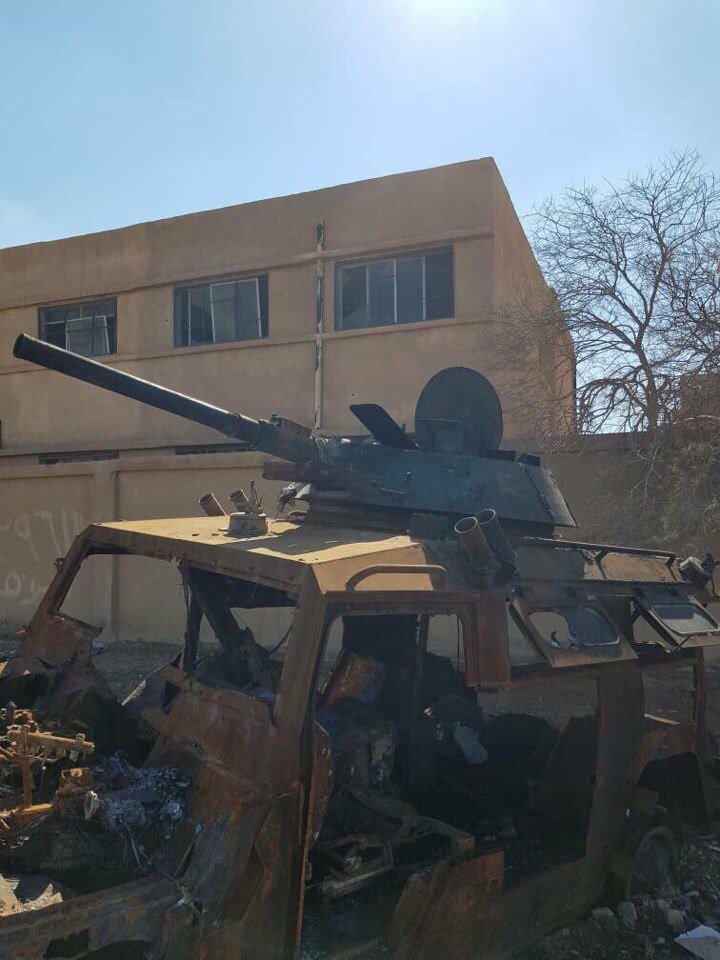 Destroyed Tigr that was captured and then used by ISIS, seems they modified it abit

Destroyed Tigr that was captured and then used by ISIS, seems they modified it abit

is this definately a tigr? as i remember seeing various trucks 4x4 and various homemade vehicles with bmp-1 turret mounted

does anyone know how many BRDM-2 are in service and if they have had any upgrades?