mack8 wrote:Just something from the rumour mill, some of it might have been stated before, but apparently Vietnam is the country that will get the 6 remaining ex-indian Su-30K from Belarus (12 already going to Angola), and some  (presumably in the know) posters are fairly confident about future orders for Su-34 and Su-35. Wait and see i guess.

Can those be upgraded easily?
Viktor

When did this happen?

Viktor wrote:When did this happen?

I have no clue... However, Russia has been selling smaller craft to Vietnam a lot recently.
GarryB

That is the Serna class... looks like a capable vessel.

Would be rather cheaper than Zubr, but also less flexible in the number of places it can land troops, vehicles, or equipment.
Mike E

GarryB wrote:That is the Serna class... looks like a capable vessel.

Would be rather cheaper than Zubr, but also less flexible in the number of places it can land troops, vehicles, or equipment.

Zubr is much, much larger! Too large for what Vietnam needs.
Viktor

Russia to build new ships for Vietnamese Navy on schedule

JAKARTA, November 6. /TASS/. Two Gepard 3.9 class frigates that Russia is building for Vietnam will be delivered to the customer on schedule - in late 2016, a representative of the shipbuilding company told TASS on Thursday at the Indo Defence international exhibition.

“A couple of such frigates were built for Vietnam in earlier, now the second pair is being built that differs in the weapons and military equipment. The delivery deadline is late 2016,” chief engineer of the Zelenodolsk Design Bureau Yevgeny Matveyev said.

The designer said the new frigates for the foreign customer will have, in addition to the surface countermeasure systems, antisubmarine warfare equipment. “To date, there are no factors for non-fulfilment of the obligations, the shipbuilding is going on schedule,” Matveyev said.

The construction of the second pair of the Gepard 3.89 class frigates with antisubmarine weapons for the Vietnamese Navy continues the work of the JSC A.M. Gorky Zelenodolsk Plant within the framework of international military-technical co-operation. The contract on the construction of the first pair of the warships of project 11661 was concluded in 2005. The plant successfully fulfilled all the building stages - the warships were delivered in 2011.

The new pair of frigates differs from the previous ships by antisubmarine weapons and advanced high-performance propulsion system.

Vietnam on Saturday celebrated the replenishment of its navy with two additional kilo-class submarines, which were produced in Russia.

At the commissioning ceremony at Cam Ranh Naval Base in Khanh Hoa Province, south of Hanoi, the national flag was raised on both vessels.

The submarines' names — 184-Hai Phong and 185-Khanh Hoa — were originally the names of Vietnamese coastal cities.

There will be two more 636 Varshavyanka Kilo-class submarines arriving in Vietnam to complete the 6-item deal. The diesel-powered vessels were ordered in 2009 from Admiralty Shipyard in St. Petersburg for $2 billion.

The first two submarines, the 182-Hanoi and 183-Ho Chi Minh, were handed over to Vietnam a year ago, in April. The last delivery is scheduled to be carried out by 2016.
Russia will also train Vietnamese crews and provide indispensable spare parts. All of the commissioned submarines are to join Submarine Brigade 189, Vietnam's news agency VNA reported.

As the submarines were commissioned amid ongoing tension in the South China Sea; Pham Hoai Nam also stressed during his speech that reinforcement of the Vietnamese navy wasn’t meant to create an arms race or deter other countries, but only to protect country’s sovereignty and ensure peace in the region.

The first Russian Kilo Class submarine was released in the early 1980s. The latest models of the vessel are almost 74m-long, have a 3,000-ton displacement and can operate in 300 meter-depths at a speed of 20 nautical miles per hour.


Chelyabinsk Tractor Plant (CTZ, part of the corporation "Uralvagonzavod") produced five bulldozers B14 for Vietnam, the press service of the company.

"Machines are assembled, commissioned and passed acceptance by the customer. The contract for the supply of equipment awarded to "VuTrak." Technology will be used by the Vietnamese military builders and replenish the fleet of road construction machinery engineering troops of the Ministry of Defense of Vietnam. Chelyabinsk bulldozers will work on the construction of infrastructure, in particular in the construction of a strategic highway along the border with Laos, "- said the press service.

According to head of sales in foreign countries Enterprise Vladimir Klein, customer acceptance of technology is successful. "In order to deliver tractors to Vietnam, they will be disassembled into large units and in St. Petersburg on ships to deliver to Hamburg. There they were loaded on the ship, next to the port of Haiphong in Vietnam "- led to his word, the press service.

Vietnamese military construction, which is the technique used Chelyabinsk Tractors 1960s. Previously, they had already bought a batch of bulldozers B12, which performed well in local soils rocky. 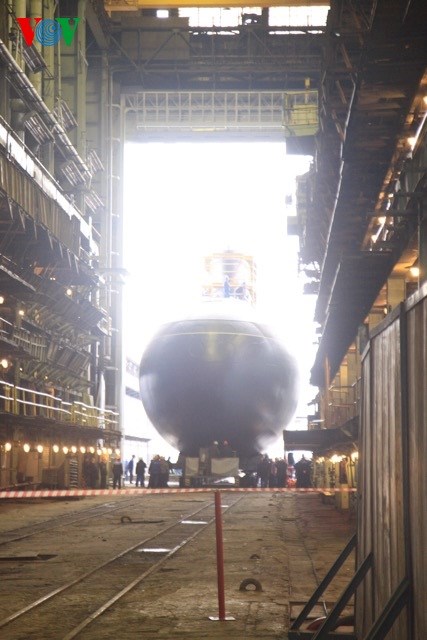 Wonder if any of our vietnamese members know if there's any credence to this?

The 5th submarine of Project 06361 is delivered to Vietnam

2 new Su-30MK2 fighters, bringing the total number of advanced combat aircraft of this type in the Vietnamese Air Force up to 36 units into service .

The frigate will be put afloat on April 27 to undergo running trials, the spokesman added.

"The shipyard has completed the construction of a Gepard-3.9-class frigate for the Vietnamese Navy. The vessel will be floated out on April 27," Spiridonov said.

According to him, the ceremony of floating out the frigate will be attended by the Vietnamese Navy’s delegation.

"The Vietnamese delegation has arrived today to view the ceremony. Representatives of Russia’s arms exporter Rosoboronexport will also take part in the ceremony," the spokesman said.

The Zelenodolsk Shipyard delivered the first two Gepard-3.9-class frigates to the Vietnamese Navy in 2011. After that, Vietnam signed a new contract to receive another two Project 11661 frigates.

The construction of the fourth Project 11661 frigate is nearing completion at the Zelenodolsk Shipyard.