"As of today, you can report that in the middle of the year about 36% of serial deliveries have already been realized, the troops have already delivered about 40% of annual commitments," - Borisov said in a TV channel "Russia-24" .

He added that earlier, as a rule, all weapons supplied to the troops at the end of the year, after November 25th.
franco

MOSCOW, July 15 -. RIA Novosti Almost 250 new tanks and armored vehicles made ​​for the Army and the Airborne troops of Russia in the II quarter of this year, said the head of Anatoliy Gulyaev main armament control the Russian Armed Forces in the course of a single day of acceptance of military products.

In addition, it adopted a set of Brigadier tactical missile complex "Iskander-M".

"From the military missions adopted most of the equipment was admitted to the military units and put into operation," - added a walk.

Earlier, Defense Minister Sergei Shoigu said that the annual plan for the supply of military equipment to the Russian troops carried out on 40% in the II quarter, it is a good pace.
franco

MOSCOW, July 15 -. RIA Novosti share of modern weapons and military equipment in the Armed Forces by the end of the first half of 2016 rose to 48%, he said Friday during a single day of acceptance of the military Chief of the Russian Armed Forces armament Lieutenant General Anatoly Gulyaev.

"Taking into account the supply of equipment in the first half of 2016, the level of equipment and troops with modern armaments perspective increased by 0.7% and is now around 48%," - said Gulyaev.


"Military-industrial company completed early implementation of the three-year state contract for the supply of armored personnel carriers BTR-82A Out of 153 units have been delivered to military units of the Western Military District 130 units, 22 armored personnel are ready for shipment, one runs periodic tests." - Krasovitsky said.

According to him, the state contract for the supply of special purpose vehicles "Tiger-M" is made of 60%. Of the 82 units, military units delivered 30 cars, 20 cars ready for shipment.

"Currently, the Military Industrial Company started to implement additional public contracts for the supply of 68 BTR-82A in 2016. The obligations of the enterprise will be fully implemented in a timely manner and with appropriate quality." - Added Krasovitsky.

No idea where to post this.. but interesting video of a summary of
Russia military inventory until 2016.. in comparison with US military hardware.

didn't someone post an article a bit ago where they said a manufacturer plant failed to produce a fairly large numbers of armored vehicles on time and is very late?
franco

MOD assistant DM for Arms purchasing says that they are in no hurry to get the T-14 and T-50 due to financial constraints and the alternates MBT modernizations and aircraft such as the Su-30SM are more then satisfactory.

Woow, is the part about the T-90 modernization legit??
Benya

Woow, is the part about the T-90 modernization legit?? 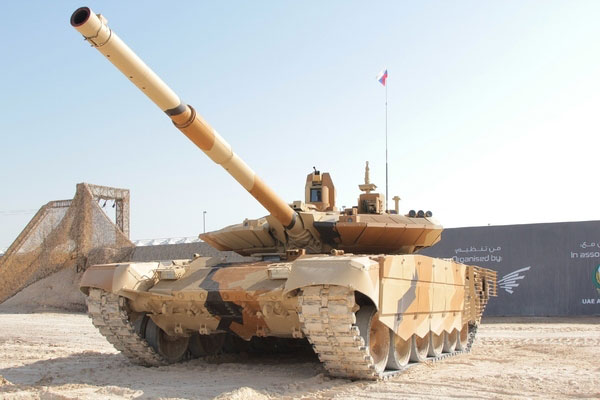 Interview with the MoD's Chief of Tank - Automotive;

- over 1,000 T-72B3's so far
- over another 300 improved T-72B3's on their way
- Tigr-2 looks promising
- Typhoon 4x4 with 30mm cannon should be tested in special purpose units in 2017
- T-90's to be upgraded when they have exhausted their resources (worn out sounds like)
- T-14,T-15 and ARV still under testing through 2017
- same for Kurganets and Boomerangs, no production starts before 2018
- MoD purchasing around 200 ATV type vehicles per year
- work continues on testing and development of all types of vehicle for extreme Northern use
- no wheeled tank at this time

- no wheeled tank at this time

That does not actually surprise me.

the concept of light (Typhoon) and Medium (Boomerang) wheeled divisions suggest to me light and medium forces that would not be used against opponents with a lot of MBTs in heavily fortified positions or urban areas etc.

In this case the combination of light gun platforms perhaps armed with a 57mm high velocity gun and support vehicles will 120mm gun/mortars either as mortar carriers or as BMPT type tank support vehicles would make the role of an actual tank redundant.

Any enemy tanks they might come across could easily be dealt with by Kornet type missiles or even guided artillery shells in top attack mode.
VladimirSahin

Would assume that is the improved T-72B3's that he is talking about.
Benya

Aviation and helicopter regiments and brigades of the Southern MD have already received more than 10 pieces of aviation hardware, including Mi-8AMTSh, Su-25SM, and Su-30SM. In total, these formations are to receive about 30 aircraft by the end of 2016.

In the middle of 2016, S-400 Triumph and Pantsyr-S air defence systems have been deployed in Crimea this year.

Black Sea Fleet and Caspian Flotilla are to receive about 20 ships, vessels, and motor boats as well as 10 aircraft for naval aviation.

By the end of 2020, the Southern military district is to be equipped with up to 70% of modern hardware operated by ground, naval, and aviation units.

The Federal Antimonopoly Service (FAS) has found major violations on the basis of a scheduled inspection of the FSUE "Spetsstroyinzhiniring at Special Russia", including the failure of defense contracts worth more than 150 billion rubles.

"Spetsstroyinzhiniring" is defined by the Government of the sole executor of design and survey works, construction, overhaul and reconstruction of the Defense Ministry special forces. The company under the jurisdiction of Spetsstroy.

The audit showed that FSUE actually distribute the work under a state contract between the organizations subordinate Spetsstroy, and other commercial companies, the FAS said.

"As a result of the lack of proper control over the actions of their subcontractors' Spetsstroyinzhiniring" ripped turnaround time for state contracts totaling more than 150 billion rubles. In addition, the Federal State Unitary Enterprise does not carry out work with claims in respect of involved subcontractors. The size of the detected penalty not to demand from subcontractors, was more than 10 billion rubles, "- said the FAS.

The audit FAS filed more than 20 cases of administrative offenses in relation to company officials involved in the disruption of the state defense order. On the results of checks to inform the General Prosecutor's Office and the FSB.

I hope the Defense ministry do more to tackle corruption in arms procurement especially in a time of economic difficulties where every single ruble counts.

MOSCOW (Sputnik) — The Russian Armed Forces have received over a dozen aircraft and helicopters, as well as 21 radars and the Bal and Bastion coastal missile defense systems in July-September this year, Russian Defense Minister Sergei Shoigu said Friday.

SOCHI, November 15 - RIA Novosti. Since the beginning of the year in the Russian armed forces received more than 5.5 thousand units of equipment, including 190 aircraft and helicopters, a multi-purpose submarine, more than 750 tanks and armored vehicles, said Russian President Vladimir Putin, opening up a series of meetings with the leadership of the Ministry of Defense and defense industry.

"The troops received more than 5500 units of armaments and military equipment. This includes more than 60 new and 130 upgraded aircraft and helicopters, attack submarines, 60 anti-aircraft missiles, missile systems and complexes, 55 radar stations, 310 new and 460 modernized tanks and armored vehicles in total this year, the planned volume of supply of new and repair 5700 units of major weapons and military hardware, and we expect that they will be handed over to the troops on schedule " Putin said.

Drawing attention to the meeting, Supreme Commander emphasized that it is important to reinforce the positive groundwork achieved in recent years, to continue to clearly and consistently communicate in the formation and implementation of the state defense order assignments.

"Such a challenge facing the Ministry of Defence and all the enterprises of the military-industrial complex Secondly, it is necessary to strengthen state control over the efficient spending of the prime contractor and subcontractors of budgetary funds allocated to the state defense order.", - Putin said.

Coming up to the end of the year 2016 and a review of the Air Defense modernization programs to years end;

EDIT: in addition there are an unknown number of S.300PM's upgraded to S.300PMU standard.
franco

Ignore the poor headline translation but almost 7,000 new pieces of equipment delivered to the Russian Armed Forces in 2016.

Very interesting. Haven't really read it yet. So I don't know what the technical accuracy is like.

Lots of crybaby whining about Russia "not respecting international law". So hold your noses in parts.

Comments from the Ministry of Defense Meetings;