Why can't they make in India weapons?

Probably because for self defence you want the best you can afford, but if you demand to make them yourself you are paying top dollar for the privilege.

If Russia imposed sanctions all the time on India then a secure source for parts makes sense, but there is no such history with Russia.

India is better off having a made in India drive for things that would be useful for the average indian and for India as a whole...

According to Indian sources, the first ten 155-mm / 52 self-propelled howitzers K9 Vajra-T, which are a "localized" variant of the well-known South Korean self-propelled gun, are prepared for the transfer of the Indian army to the Indian private group Larsen & Toubro (L & T) in Hazira (Gujarat) howitzer K9 Thunder. In fact, these ten systems were completely manufactured in South Korea by the Hanwha Techwin division of the South Korean corporation Hanwha, and at the L & T plant in Hazira, only their retrofitting was made. 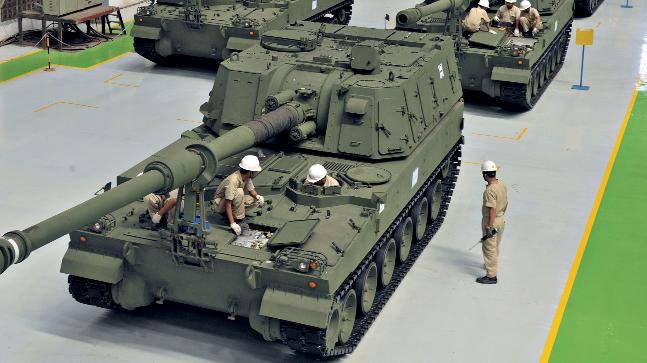 The expected delivery of these K9 Vajra-T systems, apparently, will complete the painful process of choosing the 155-mm / 52 self-propelled artillery system by the Indian army on a tracked chassis that lasted about 25 years. These systems are the first to be supplied under the contract of the Ministry of Defense of India with the Larsen & Toubro group at a cost of 4,600 crore rupees (about 710 million dollars) for the delivery of 100 SPH Κ9 (with an option for another 50) concluded in May 2017.

According to the contract, the first ten SPH Κ9 of Vajra-T are delivered from South Korea from Hanwha Techwin within 11 months of the signing of the contract, and the remaining 90 must be collected at the Larsen & Toubro facility in Hazira with a localization level of 50 percent. Deliveries of all 100 systems must be completed within 42 months (that is, by November 2020). It is claimed that L & T will manufacture a hull, a tower, an ammunition supply mechanism, a fire control system, a missile velocity measuring system, a WMD, air conditioning and fire fighting system within this production. Also, the Indian industry will supply the BEL FOG navigation system, the night vision thermal imaging system and the STARS-V Mk 3 radio communication system (in general, 13 Indian-made systems will be used). Thus, the rocking parts of the howitzer will probably be imported entirely from South Korea, and the engine and transmission from Germany. 12.7-mm machine guns NSV (probably meaning "Cord") will be imported from Russia. In April 2017, the Larsen & Toubro group signed a corresponding agreement with Hanwha Techwin on the licensed production of ACS K9.

In October 2015, 155-mm / 52 self-propelled howitzer K9 of South Korean company Samsung Techwin (since 2016 passed under the control of Hanwha Corporation as Hanwha Techwin) was declared by the Ministry of Defense of India to be the winner of the process of choosing the self-propelled artillery system of this caliber for the Indian army. Samsung Techwin has acted in this tender since 2012 in partnership with the Indian group Larsen & Toubro. At the same time, it was claimed that at the final test ranges in India in Q9, K9 surpassed the Russian Mash-SM self-propelled howitzer 155 mm in its export performance as its main competitor. 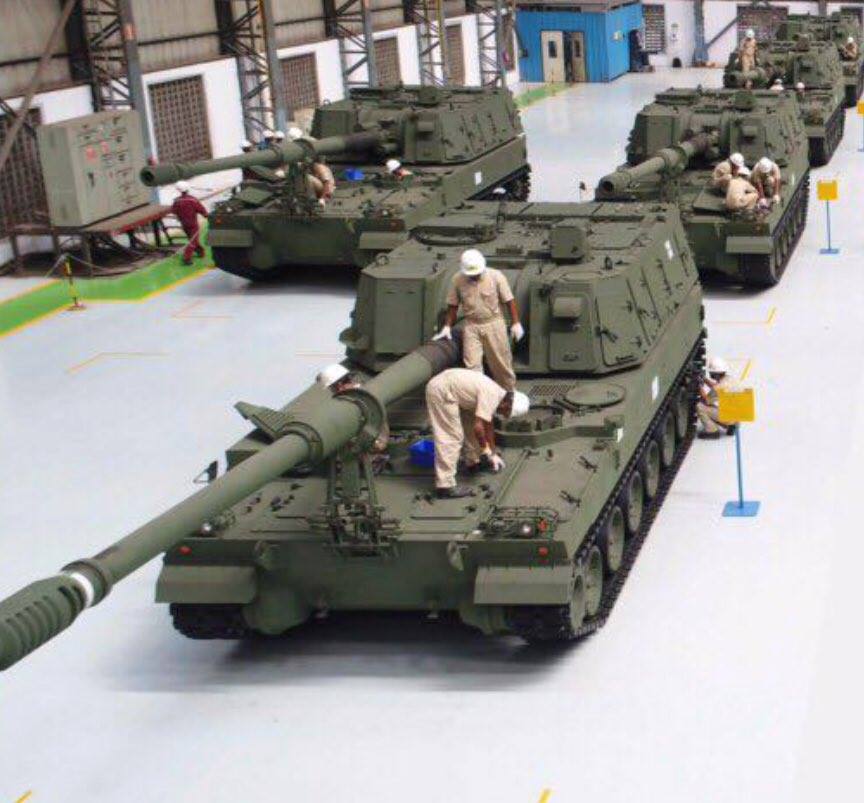 According to Indian media, at the end of January 2019, Indian Defense Minister Nirmala Sithamaran approved 72400 SIG Sauer SIG716 automatic rifles (version SIG716 G2 Patrol) for the Indian army, patronized by NATO 7.62 x 51 mm. The procurement cost is estimated at about $ 72 million. The rifles will be purchased by the Ministry of Defense of India under the so-called accelerated procedure (Fast Track Procedure - FTP) with delivery within 12 months from the date of signing the contract (which is expected to be signed in mid-February) directly from the manufacturer - American company SIG Sauer Inc. (since 2000, the American SIG Sauer Inc. is a separate company from the German SIG Sauer GmbH, and the latter is no longer a manufacturer of small arms).

At the 11th International Exhibition of Land and Naval Arms DefExpo 2020, held on February 5-9, 2020 in the Indian city of Lucknow (Uttar Pradesh), the Indian state association Bharat Dynamics Limited (BDL) presented materials on the promising since 2017 Amogha-III portable anti-tank missile system, including a full-size missile prototype. 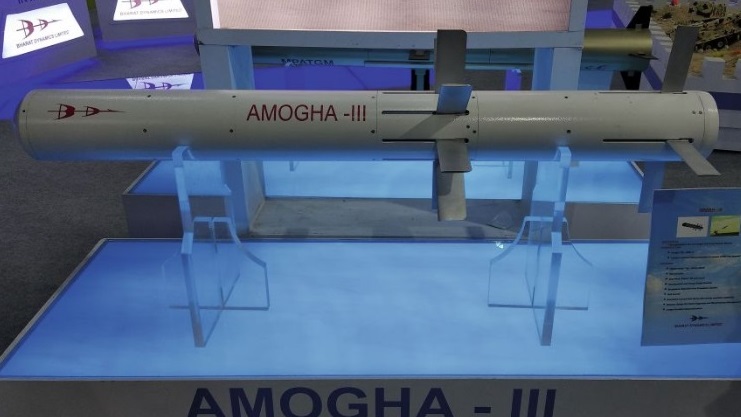 In November 2017, I wrote about the cancellation by India of a practically signed $ 525 million contract with Rafael for the supply of Spike ATGMs and spoke in detail about the MPATGM (Man-Portable Anti-Tank Guided Missile) program of India in the framework of which this ATGM had to be purchased (321 complexes, 8.356 ATGMs for them, 15 simulators and related services). In late December 2017, Rafael received an official notification from the Government of India about the cancellation of the transaction.

Many saw the reason for the abolition in the machinations of Americans trying to push India their FGM-148 Javelin. However, the real reason was the pressure of the Defense Research and Development Office of the Indian Ministry of Defense DRDO (Defense Research and Development Organization). DRDO argued that the Indian industry, with experience in creating ATGMs Nag and Anamika, will be able to create a lightweight ATGM 3rd generation in 3-4 years.

Since 1988, Nag (Prospina) has been developed in 5 different versions: land transport, land for NAMICA ATGM (Nag Missile Carrier, on the BMP-2 chassis; apparently this is the 'Anamika' mentioned above), land portable, helicopter (Helina) and aviation. In most cases, we are talking about a heavy missile (43 kg, a range of 4 km in the land version), the land portable version (the so-called MPATGM, Man Portable Anti-Tank Guided Missile) is a smaller version of Nag with a mass of 14.5 kg and a range of 2.5 km (i.e. direct competitor to Spike-MR). Of all the options, only NAMICA ATGMs were adopted (443 missiles and 13 complexes were ordered, according to other sources, 300 missiles and 25 complexes, then another 15+ complexes are planned to be purchased). It was reported that mass production began at the end of 2019 and the supply of the first 40 missiles. MPATGM at the end of 2019 was still in trials.

In addition to Nag in all its variants, Amogha ATGM is being developed in India. This missile has a maximum firing range of 2.5-2.8 km, options Amogha-I and Amogha-III (see details on bmpd). Amogha-I was first tested in 2015, Amogha-III is still under development and has not reached the test stage.

Without Nag, Amogha and Spike, the situation with the ATGM of the Indian army is as follows:

As for Spike, since the beginning of 2018, the issue of purchasing this rocket has been raised again and again:

- 10.01.18 - it is reported that the Prime Minister of India, Narendra Modi, is weighing the cancellation of the decision to break the deal;
- 01/17/18 - Prime Minister Benjamin Netanyahu during his 3-day visit to India confirmed the message of 01/10/18;
- 03/07/18 - a report that a week earlier India had successfully tested the Nag rocket (the so-called Nag 190), which again called into question the possibility of resuming the deal;
- 04/15/18 - reports of new US attempts to sell Javelin to India as an alternative to Spike;
- 05/01/18 - India approved the purchase of 25 NAMICA and 300 Nag missiles; Nevertheless, we are talking about a rocket of a different class and this does not affect the purchase of Spike;
- 06.24.19 - India again announces the rejection of a large-scale purchase of Spike in favor of the development of MPATGM.

Despite the cancellation of the contract for $ 525 million, in April 2019, the Indian Army approved an urgent order for a small batch of Spike. Initially, it was about 12 launchers and 210 Spike MR missiles (2.5 km), then about 12 launchers and 240 Spike LR missiles (4 km). Apparently, the contract was signed at the end of June 2019, since it was about deliveries within 3 months from the date of the transaction. The first batch arrived in India at the end of September 2019. 02/06/20 Rafael confirmed the completion of the delivery, including 240 Spike LR missiles. Apparently, the value of this transaction amounted to $ 40 million.

03.19.20. The Indian Ministry of Defense officially announced that the Israeli company IWI will supply 16.479 Negev NG7 machine guns (7.62 caliber, chambered for 7.62 × 51 mm NATO) for the Indian armed forces. The transaction value is 117 million dollars. All machine guns will be released in Israel within 2 years. In India, a new machine gun will replace the PKM (chambered for 7.62x54R).

OFB spokesperson Uddipan Mukerjee told Janes on 31 May that once the order from the MoD is granted, Ordnance Factory Project Medak (OFPM) in southern India will begin manufacturing the amphibious platforms.

Official sources said the MoD has indicated that OFPM, which has assembled and licence-built more than 2,500 units of the BMP-2 and the BMP-2K variant since 1987, will be required to complete delivery of all 156 ICVs within 24 months.

The additional ICVs – each of which weighs 14.3 tonnes, is operated by a three-man crew, and is capable of transporting up to seven fully equipped troops – are expected to “fulfil the operational requirement for rapid deployment of the army’s mechanised units”, said the MoD.

Armament on these platforms includes a 2A42 30 mm dual-feed, fully stabilised cannon and a coaxial 7.62 mm PKT machine gun. Mounted on the turret roof is a 9Sh119M1 missile launcher for 9M113 Konkurs anti-tank guided missiles (ATGMs).

Some ICV variants featuring a modified chassis have been fitted with Nag missile carriers (NAMICAs) capable of deploying up to six locally developed Nag ATGMs.