On July 10, 2017, the Defense Security Cooperation Agency (DSCA) sent a notice to the US Congress about the forthcoming sale of 2747 JLTV (Joint Light Tactical Vehicles) to the United Kingdom through foreign military sales (FMS) With the wheel formula 4x4 produced by Oshkosh Defense. The sale is authorized by the US Department of State. The estimated cost of supply is $ 1,035 billion. 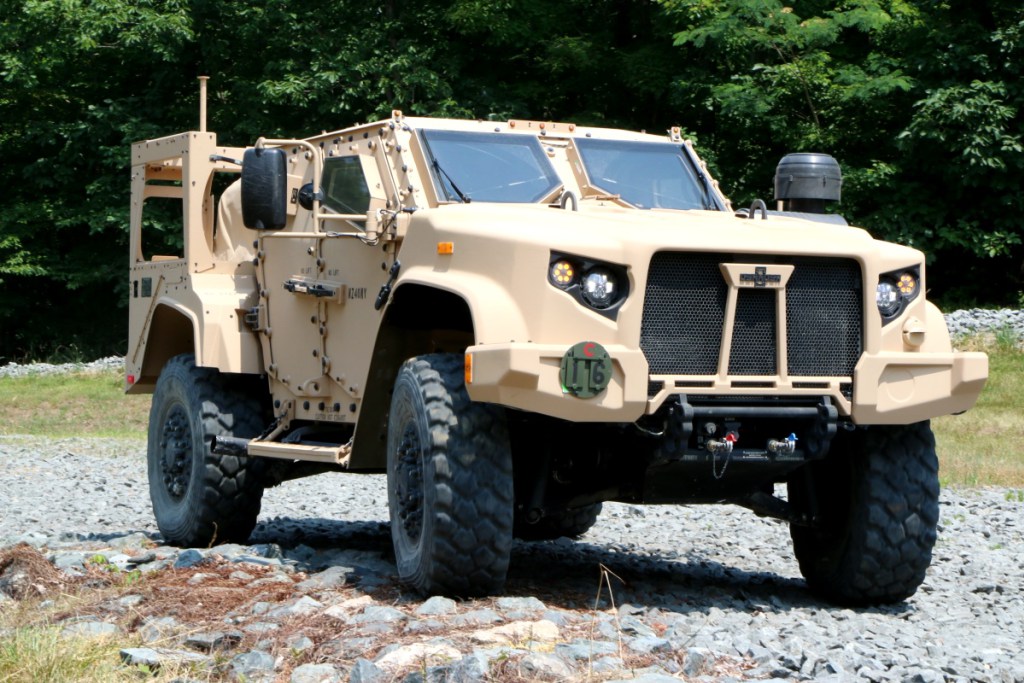 According to "Jane's Defense Weekly" magazine in the article Samuel Cranny-Evans "IAV 2018: Warrior 2 delivered for armor trials", at the International Armored Vehicles (IAV) conference in London from January 22 to 25, 2018, the representative of Lockheed Martin Corporation reported , that the British branch of the corporation (Lockheed Martin UK) handed over to the British army the first eight Warrior infantry vehicles upgraded to the level of Warrior 2. All eight cars entered the testing program for the armored British Army Armored Trials and Development Unit (ATDU) in Dorset . 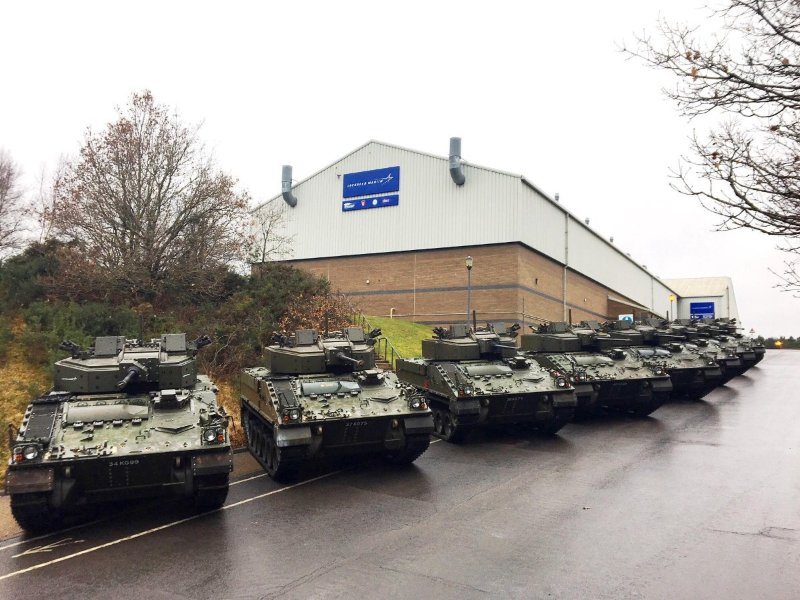 Within the framework of the Warrior Capability Sustainment Program (WCSP), it is planned to modernize 380 units from 789 Warrior infantry vehicles received by the British army from 1987 to 1995. Of this number, 245 line and command vehicles are planned to be upgraded to the Warrior 2 level under the Warrior Fightability Lethality Improvement Program (WFLIP) subroutine, providing for the installation of a new tower with a 40mm CTA International CT40 automatic cannon with telescopic ammunition and a 24-hour fire control system.

The contract for R & D under the WFLIP modernization program worth £ 200 million was awarded in March 2011 on a competitive basis by Lockheed Martin UK, the developer of the tower (which is being implemented by capitalizing the original Warrior BMP tower) and the fire control system and in general the system integrator. The cost of upgrading 245 machines under the WFLIP program was previously set at 642 million pounds, but could actually exceed 1 billion pounds. Works on serial upgrading should be carried out on the group belonging to Babcock belonging to the former military armored vehicle repair plant in Donnington. Serially upgraded BMP Warrior 2 should begin to flow into the combat units of the British Army in 2020, and are expected to be in operation until 2040.

The British Department of Defense on March 31, 2018 reported that it had decided to rejoin the GTK Boxer wheeled German-Dutch wheeled vehicle program, from which the UK withdrew in 2003. A statement from the UK Department of Defense states that "The United Kingdom will again join the Boxer program and consider options for equipping the army with 8x8 armored personnel carriers for upgrading its fleet of armored vehicles and meeting Army requirements under the Mechanized Infantry Vehicle (MIV) program."

This decision actually predetermines the purchase of BTR Boxer for the British Army under the MIV program instead of holding a wide international competition for this program. 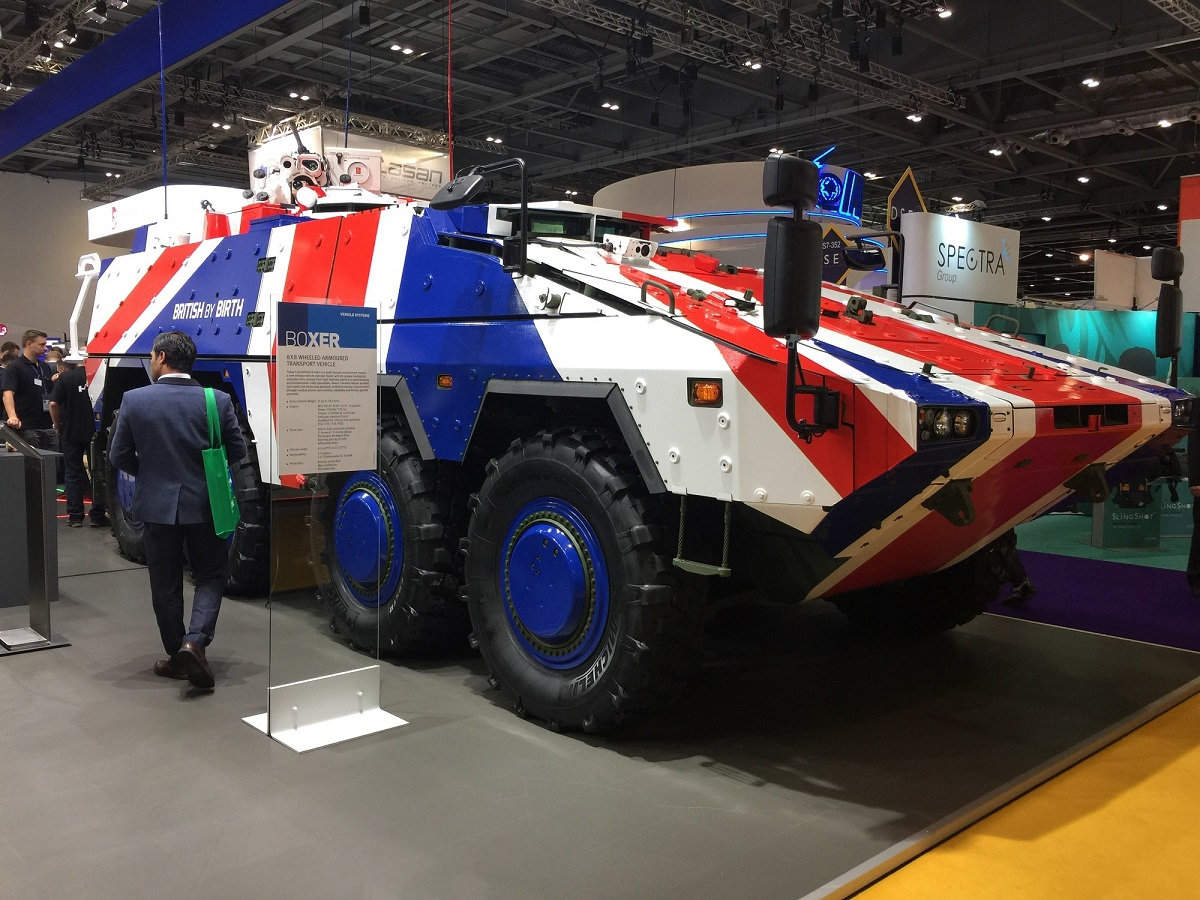 Problems of recruiting infantry units of the British Army

According to Tim Ripley’s Analysis of the British Army’s infantry units suffering from 12% shortfall in personnel, Jane’s Defense Weekly reports that the British army faces a serious shortage of non-commissioned and noncommissioned officers in infantry units. According to the Ministry of Defense of the United Kingdom, promulgated on September 20, 2018 in accordance with the Freedom of Information Act (FOI), a shortage of personnel in the regular infantry battalions of the British army (which now numbers 29, excluding two Gurkha battalions) by 1 July 2018 was 12.4% in relation to the regular number (in the whole of the British Army a shortage is 6.8%). 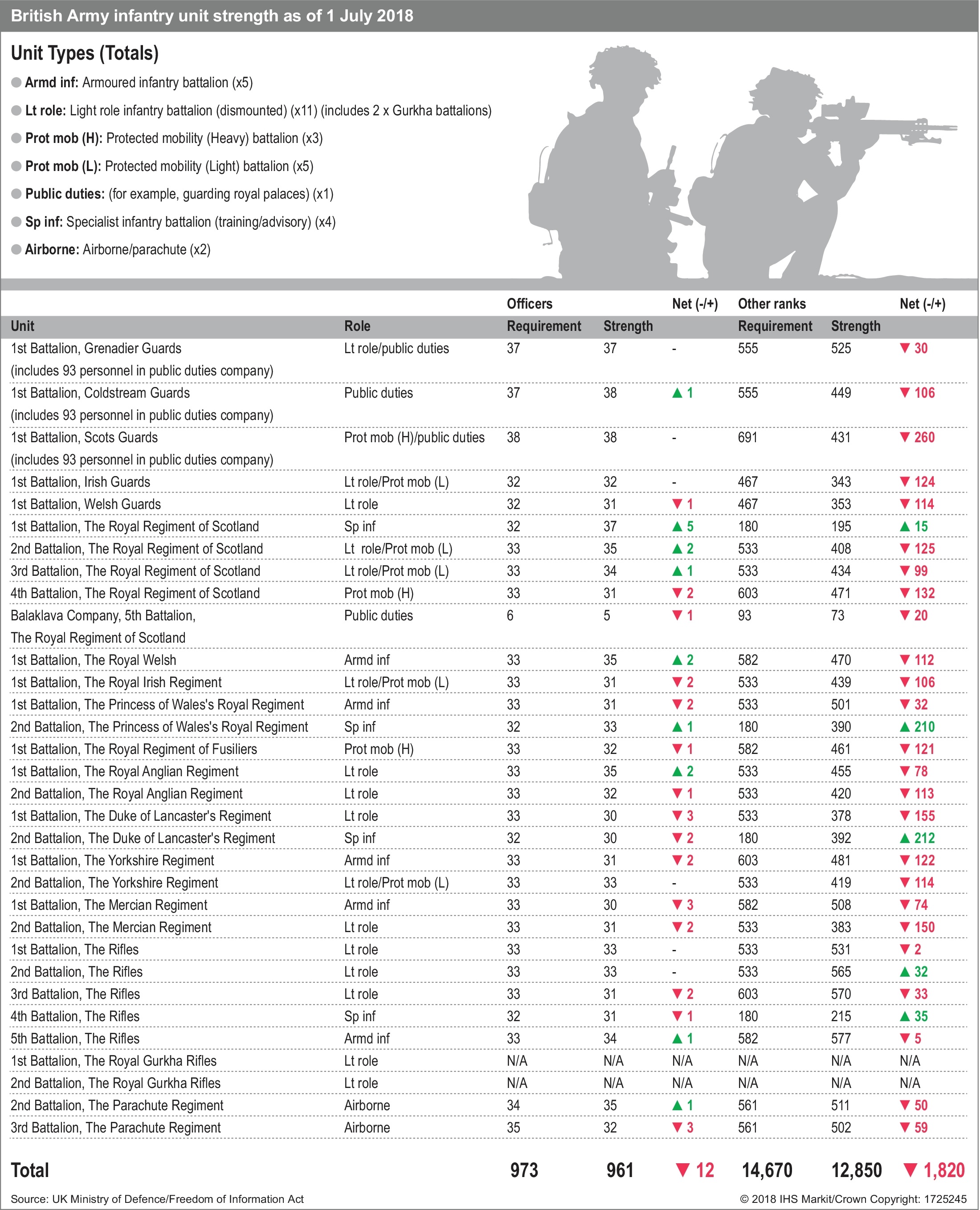 The Ministry of Defense of Great Britain on November 5, 2019 announced the signing of a contract worth £ 2.8 billion for the purchase of "more than 500" GTK Boxer armored personnel carriers with an 8x8 wheel arrangement of various modifications for the British army. The contract is signed with the European procurement Organization for Cooperation in the field of armaments (Organization for Joint Armament Cooperation - OCCAR). Deliveries should begin in 2023.


The production of GTK Boxer armored personnel carriers is carried out by the German consortium Artec (now it combines Rheinmetall Defense and Krauss-Maffei Wegmann / KMW, now KNDS), and their implementation and maintenance are carried out as part of a joint program through OCCAR.

Recall that the United Kingdom was originally a member of the tripartite (with the participation of Germany and the Netherlands) program for the creation of an armored personnel carrier GTK Boxer (MRAV), however, in 2003, the British Ministry of Defense withdrew from the project, explaining that the characteristics of the machine did not meet British requirements, including air transport. In March 2018, the British Department of Defense returned to the Boxer program as part of the OCCAR.

Thus, then the United Kingdom made the final choice in favor of the purchase of Boxer APCs and finally abandoned the idea of ​​holding an international tender for the Mechanized Infantry Vehicle (MIV) procurement program for the British army of wheeled armored personnel carriers.

After the UK left the Boxer program in 2003, the British Department of Defense launched an ambitious program for creating a new generation of Future Rapid Effect System (FRES) armored vehicles, the Utility Variant (FRES UV) wheeled armored personnel carrier subroutine was initially considered the main program. BTR Boxer was one of three candidates for the FRES UV routine, but General Dynamics Piranha V was announced victory in May 2008. But at the end of 2008, the British Department of Defense announced the suspension of the FRES UV routine and “restructuring” the entire FRES project in favor of Priority of the family of tracked platforms in the FRES Specialist Vehicle subroutine (as a result of which the General Dynamics Ajax family of tracked vehicles was created).

Since 2013, the need for wheeled armored platforms was again put forward by the British army, now as a MIV program. The world's leading manufacturers of armored vehicles have already prepared for this expected new megatender - the consortium Artec (manufacturer of BTR Boxer), Nexter Systems (VBCI), General Dynamics (with the next version of Piranha), Lockheed Martin in partnership with Finnish Patria (AMV) have already announced their participation. BAE Systems (with a new project - possibly reincarnation of SEP projects), Iveco and Singaporean STK.

In total, according to the MIV program, it is planned to purchase up to 900 armored vehicles with an 8x8 wheel formula for the British Army.

According to a statement from the UK Department of Defense regarding the conclusion of a contract for the purchase of Boxer APCs, the first phase will be the purchase of four types of vehicles - a linear APC, a command post vehicle, a medical vehicle and an armament carrier. In the first stage, four motorized infantry battalions — two in two new British “strike” brigades (Strike Brigades) formed by the British Army — will be equipped with BTR Boxer (MIV) (in addition, each regiment will include two regiments for new tracked armored vehicles Ajax family).

The detailed parameters of the signed Boxer purchase contract have not yet been announced, but the British Defense Department said earlier that the contract should provide for the ability to build and export vehicles from the UK, including the complete assembly of Boxer in the UK with at least 60% participation in the production of British industry,

The Artec Consortium, which manufactures Boxer APCs, has already committed itself to the British industry by signing partnership agreements with BAE Systems, Pearson Engineering and Thales UK, pending the conclusion of the contract. British companies are expected to compete for the production and supply of many BTR subsystems, as well as for the organization of a complete production and assembly line in the UK. Estimates suggest that Artec's planned UK investment could provide or create at least 1,000 jobs. The Rolls-Royce group is already involved in the production of engines for Boxer, and British companies Parker-Hannifin, William Cook Engineering and others are also expected to be connected to the production of components.

Under the proposed contract, the UK is also expected to receive significant investments from the Rheinmetall group, which has announced its intention to establish a center in the UK.

Looks like a good replacement for the old CVR(T), and packing a 40mm will give someone a nice headache on a two range once they sort the feed issues. 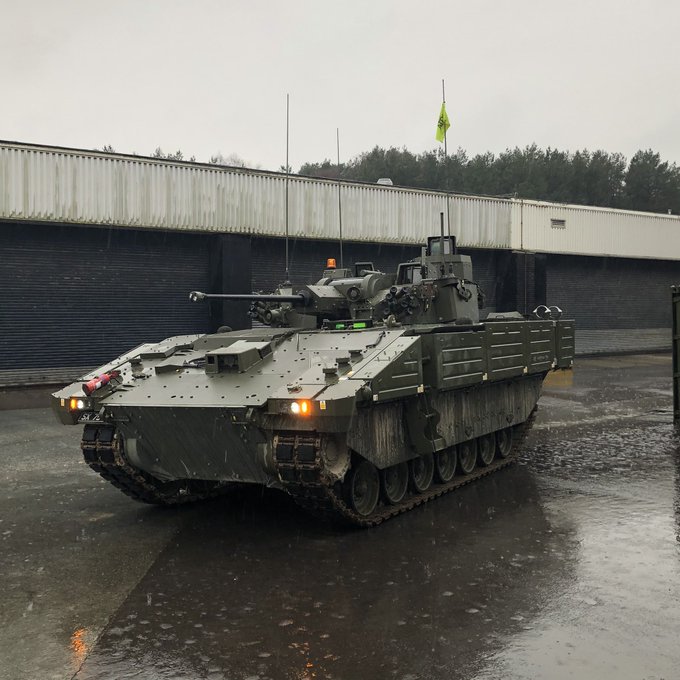 As they say "logistics win wars".

How the hell do you move this amount of stuff on a modern battlefield? Hundreds of trucks, it ain't gonna happen other than in someone's plan. 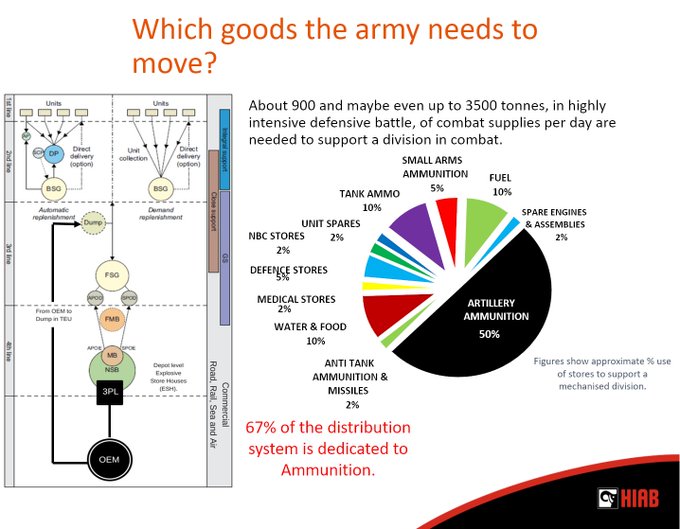 What's the views on such a system

British Army tests smart rifle that makes every bullet hit target and 'never misses
It has been developed by Israeli firm Sharp Shooter and costs just £800.

Yeah, that is just the same technology as was shown a short while ago on Russian rifles... effectively it is a thermal scope with a laser rangefinder and ballistic computer and image processing computer built in.

Of course it identifies the target as an object but without any friend or foe ID system there is no way to tell a target terrorist from a civilian... this is an Israeli system... have you noticed a dramatic drop in the number of Palestinians being shot recently?

Basically it automates the process of shooting a target so you select the target and shoot... new civilian scopes for hunting can do the same these days too.
JohninMK

Defence Committee
@CommonsDefence
·
Jul 10
We have now published the transcript from our session with General Sir Nick Carter, the Chief of the Defence Staff

Jul 10
Have you guys noticed that Chief Defence Staff literally said there is a gun-fired missile requirement for Challenger 2 now...? Big surprise there, as far as i'm concerned.

Real pearl follows: "It needed ability to put a missile down that barrel to overmatch Armata."

Hahaha... yeah... the only thing the Challenger II needs to be better than Armata will be a gun tube launched missile... that will do it...