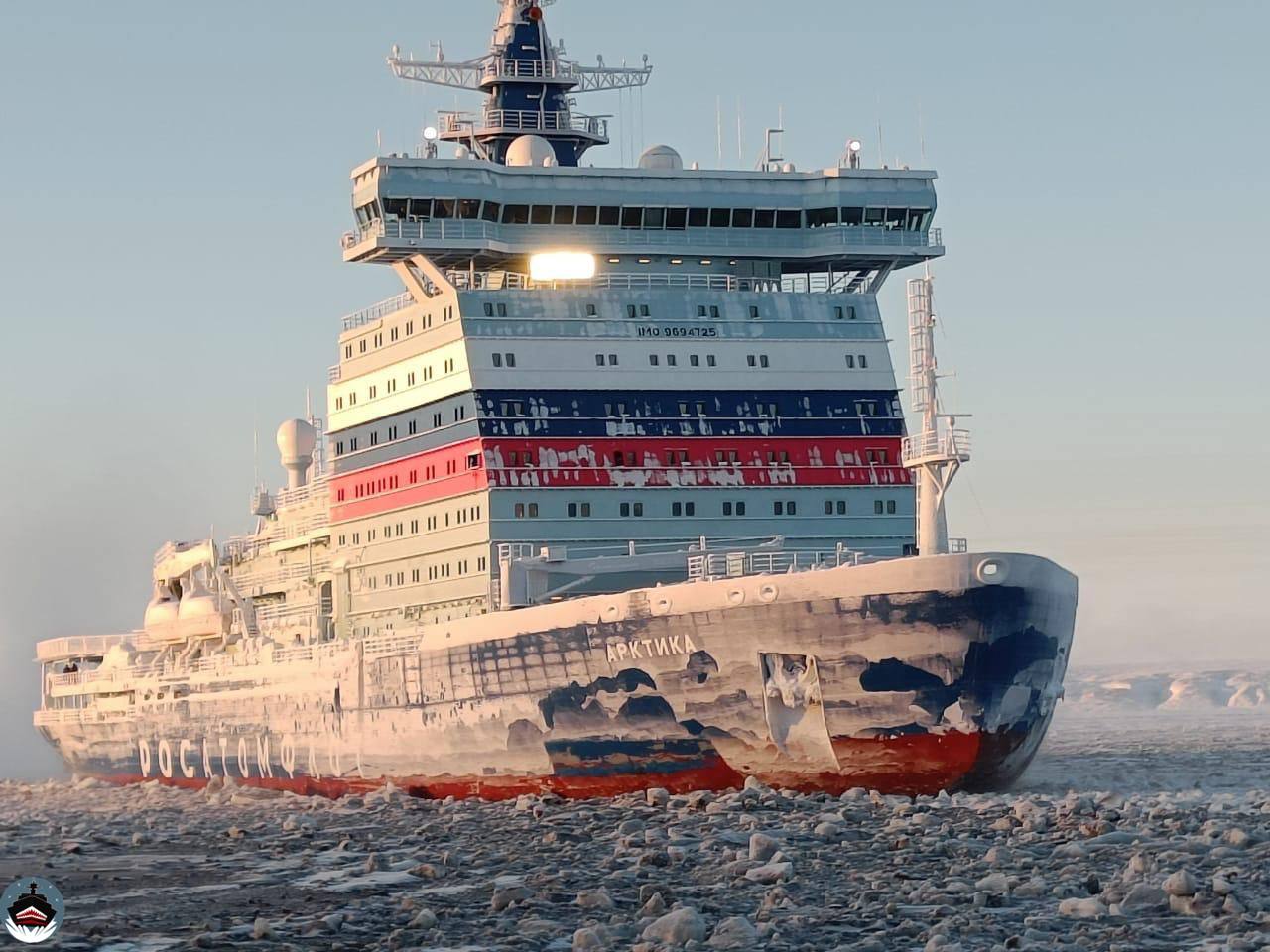 Floating citie of the Lords of the North.

The Arktika class are so mind blowing already, I cannot wait to have my mind completely blown by the Leider Class.

The reactor vessels for Russia's largest icebreaker yet, the Leader, are being made. The vessel will use two RITM-400 reactors for a propeller power of 120 MW, which is twice that of the newest icebreakers currently at sea.

Leader will be the first of Russia's 'Project 10510' icebreakers. With unprecedented size and power for a civilian vessel Leader, and two subsequent Project 10510 icebreakers, will be able to penetrate ice up to 4.3 metres thick and clear a channel up to 50 metres wide. Their main purpose will be to maintain passability of the Northern Sea Route, the development of which is a Russian national priority.

The RITM-400 is a development of the RITM-200 reactor design which already has variants for icebreakers, floating power plants and for use on land. As a scaled up model, RITM-400 produces 315 MWt compared with RITM-200's 165 MWt, but uses the same technologies. Atomenergomash said it "surpasses all available marine reactor units."

Aboard the Leader, its two reactors are placed side-by-side in the centre of the ship. Their thermal energy will be converted to electricity by a steam turbine by four 35 MWe generators. This is transmitted to four 30 MW motors to drive its propellers with a total power of 120 MW, which is twice as much as the latest icebreaker to be launched, Sibir.

The Leader itself is being built at the Zvezda Shipbuilding Complex, near Vladivostok. It should be brought into service in 2027. Two more Project 10510 icebreakers were announced by a Presidential decree in October 2020, but they have yet to be named.

The RITM series of small reactors is designed by OKBM Afrikantov, a Rosatom subsidiary. The reactor vessels are being manufactured by another subsidiary, Atomenergomash.

RITM-400 sounds ideal for a future Russian CVN, should they decide they want one (or several). Thermal output (315Mwt) is a little under half that of the Murkan A1B (~ 700MWt) powering the Ford-class white elephants, but it's a more than adequate basis for any conceivable large naval vessel. 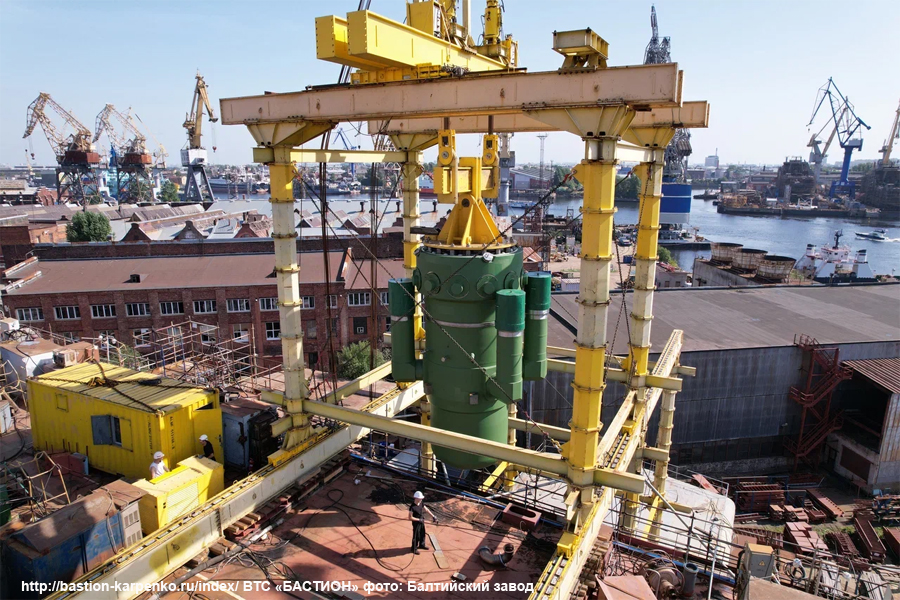 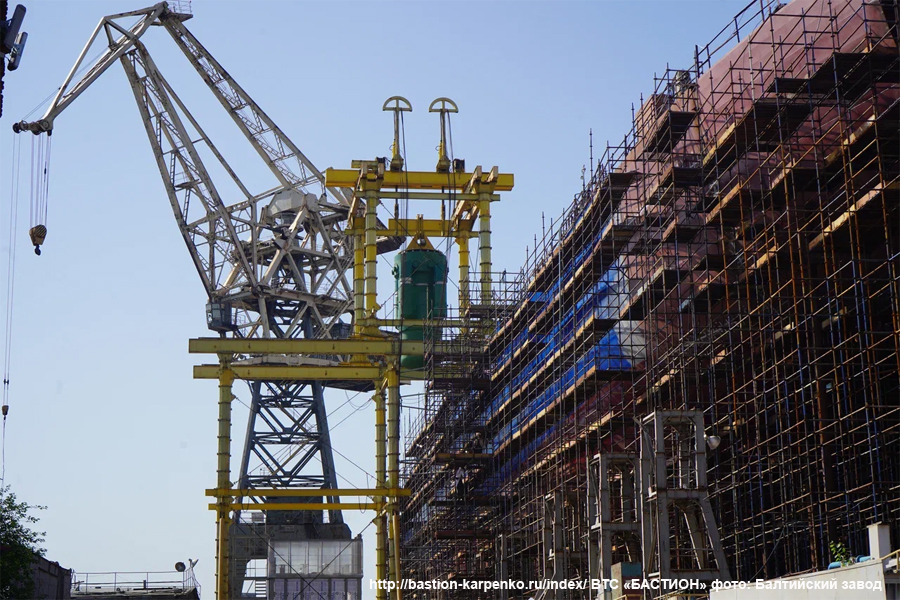 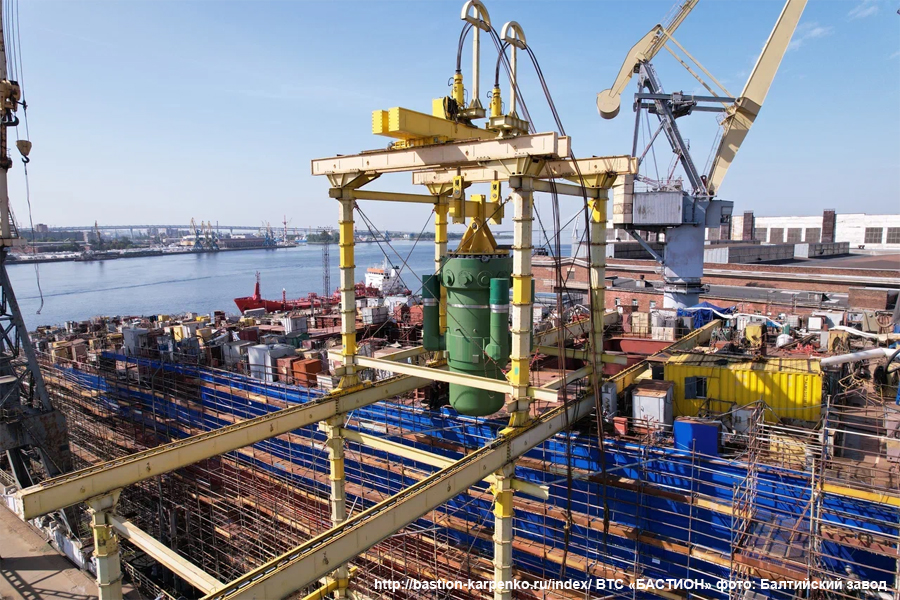 Nuclear reactor(s) of Yakutia being installed

Very green technology as you can see....

JSC ZiO-Podolsk (part of the machine-building division of the State Corporation Rosatom - JSC Atomenergomash) has completed the next stage of manufacturing the first reactor plant RITM-400 for the latest icebreaker Leader of project 10510.
Automatic surfacing of an anticorrosion coating on the internal the surface of the body part - the shell with nozzles. The technological operation is performed by a strip electrode under a flux layer. This method of surfacing has a high productivity - an average of 24 kg of deposited metal per hour. The process of automatic surfacing lasts an average of 21 days. Work is carried out continuously in three shifts. The total mass of deposited metal is approximately 1.5 tons. Anti-corrosion surfacing will protect the base metal during the entire service life of the equipment.
Next, the part will be sent for machining, control operations and pre-assembly.

For reference:
"RITM-400" is 1.8 times more powerful than "RITM-200", which allows the nuclear icebreaker "Leader" to have improved performance. In particular, it will be able to break through ice up to 4.3 meters thick and lay a channel up to 50 meters wide. As a result, the Leader-class icebreakers will be able to fulfill the main task of providing year-round navigation along the Northern Sea Route and conducting expeditions to the Arctic, including large-capacity vessels. The thermal power of the RITM-400 reactor plant has been increased to a record 315 MW. 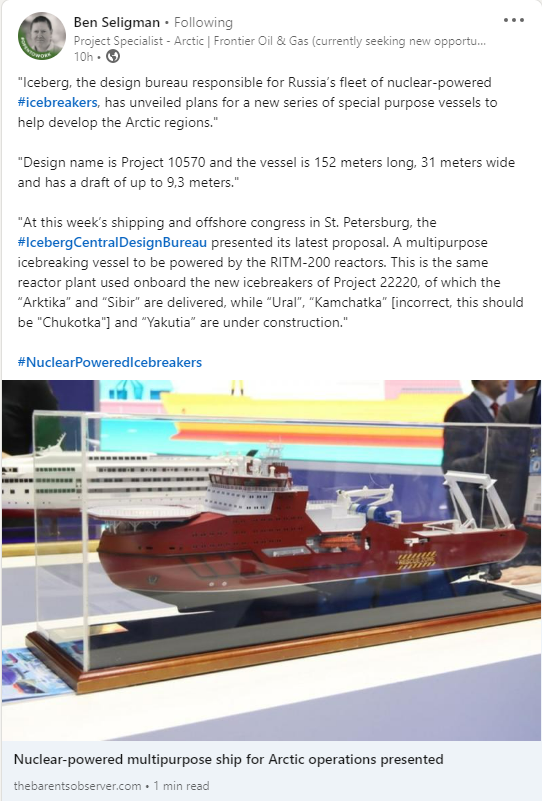 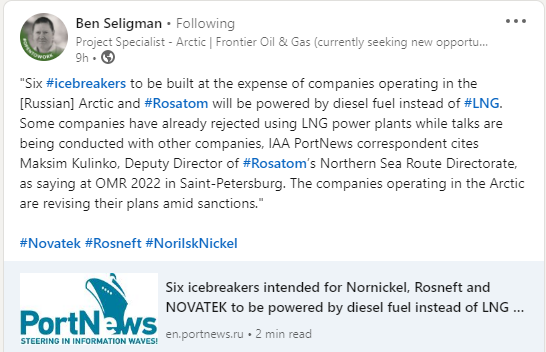 These ships will work inside russian waters so there is no need to go to "green" LNG.

Hole wrote:These ships will work inside russian waters so there is no need to go to "green" LNG.

Nothing to do with green agenda. LNG is offered as readily available solution throughout Russian Arctic. Zvezda already built and continues to build LNG powered Ice-class LNG tankers and Ro-Ro ships. Only thing that comes to my mind is that technology is imported and due to sanctions maintenance might be a problem. Diesel has to be brought from the south of the country which adds additional  operational and logistics cost.

FSUE Atomflot (part of State Atomic Energy Corporation Rosatom) has announced a tender for the right to conduct a feasibility study under the project on creation of a complex for refueling nuclear-powered ships of 22220 and 10510 designs, maintenance of refueling equipment and facilities for installation/removal of RITM-200 and RITM-400 reactor units’ steam generator cassettes. Only small and medium-sized business entities can participate in the tender, according to the official portal for public procurement.

According to the terms of reference, “in view of construction and deployment of new nuclear-powered icebreakers of Project 22220 and Project 10510, FSUE Atomflot needs to create a complex for refueling of nuclear icebreakers and a shore-based facility for storage and maintenance of core refuelling equipment and facilities for installation/removal of RITM-200 and RITM-400 reactor units’ steam generator cassettes.

The complex will be located in Murmansk. Apart from the storage and maintenance facilities it will include a 160-tonne portal crane and other equipment, transport infrastructure facilities, systems and utilities required for refueling of nuclear icebreakers and for ensuring physical security, radiation/industrial/fire safety.

The successful bidder will collect the basic information, survey the facilities, conduct engineer survey, draft design specifications for organizing of the required tender.

Zvezda shipyard (Bolshoy Kamen, Primorsky Territory) commenced steel cutting for the lead nuclear-powered icebreaker of Project 10510 (ЛК-120Я, Leader) on 6 July 2020. The state customer under the shipbuilding contract is Rosatom, builder – FSUE Atomflot, sole contractor - SC Zvezda. At least three icebreakers of this design are to be built with the lead ship to be put into operation in December 2027. Two more icebreakers are to be laid down in 2023 and 2025 with the commissioning scheduled for 2030 and 2032 accordingly.

FSUE Atomflot is a part of State Atomic Energy Corporation Rosatom. It runs the unified complex of Russia’s nuclear-powered civil ships. Atomflot’s fleet currently consists of two nuclear icebreakers with twin-reactor nuclear power plants of 75 thousand h.p. design capacity (the Yamal, and the 50 Let Pobedy), 2 nuclear icebreakers with single-reactor nuclear facilities of approximately 50 thousand h.p. (the Taymyr, and the Vaygach) and a nuclear-powered container carrier Sevmorput. Besides, the company’s fleet includes two floating maintenance bases (the Imandra and the Lotta), a special tanker for liquid radioactive waste (the Serebryanka), a multifunctional container carrier (the Rossita).