The icebreaker Leader is an amazing design. The buoyancy matches the largest aircraft carriers. Ice breaks with a thickness of 4.5 m.
Hole

It´s not only the thickness, but the speed. It can break 2m of ice with 15+ knots. With current icebreakers most freighters/tankers have to slow down to 4 - 5 knots, but with Leader they can travel with their normal speed.

... and that makes it capable to assist the convoy directly, not to break the ice in advance. This is a typical sea route speed.

The northern sea route, thanks to icebreakers, climate warming, in addition to a significant trade route, will enable the free movement of the Russian fleet between the Atlantic and the Pacific Ocean. They do not have to sail around the world through hostile waters.
ALAMO

It does indeed, that is why I expect some kind of big naval base on the Kara Sea quite soon. It is a very good location, covering the big infrastructure projects on Yamal.

So two more Arctic to the planned 5 now? This makes for a total of 7 Arktika icebreakers plus 3 Leaders and 4 gas icebreakers. Wow impressive
ALAMO

But let's focus again on the scale.
Sure, the atomic ones are to replace aging Таймыр, Вайгач and Ямал, all of them will be gone late 20s.
But the 4 gas-powered are extending the capabilities.
You don't spend such a mountain of cash if it is not needed.
If the biggest icebreakers on the planet are not enough to secure the needs, it means that those needs are hiking as crazy.
And 60 bln RUB for an atomic icebreaker? That shit would cost $10 bln when building in Murica

Need so many they can't build them all.

Sea and Coast
@seaandcoast1
·
29 Jul
Turkey’s Sefine Shipyard became the only bidder for tender held in Russia to build an 18 MW icebreaker, 7 class ship according to the Russian classification system for the Northern Sea Route in the Artic. Sefine Shipyard will undertake the construction for some $180.3 million
ALAMO

18MW is a small icebreaker, usually suited for operating in warmer, still freezing seas like the Baltic or Okhotsk. Or in the summer period in the Arctic.
Mostly it used to be Rosmorport order, and this is a federal agency responsible for smooth port operations.
I guess it is proj. 21900 derivative.
Russians usually outsource their production.
Last time, they placed it to Germany's shipyard Sietas in Hamburg, but it is owned by Pella anyway.
Back there, it used to be constructed at Arctech in Helsinki.
Wonder why they are switching the contractor there

The price is quite shocking, the last tender for this class was budgeted below $100mln.
The other thing I find amazing, they are ordering this class on yearly basis, but with different contractors

Still, "a small icebreaker" stands behind a 120m long hulk with 15kt displacement

By the way, we face more and more collaboration with Turkey ...
Russian_Patriot_

As reported by the web resource Mediapaluba, the lead new nuclear icebreaker Arktika of Project 22220 (LK-60YA), entered the Veleshchinsky dry dock of Kronshtadt Marine Plant JSC on August 12, 2021. The ship will have to replace the propeller motor on the starboard shaft, which failed during the commissioning of the electric propulsion system.

On July 9, the icebreaker Arktika returned to St. Petersburg from Murmansk for repairs. The ship docked at the Baltic Shipyard. On August 12, the ship left the enterprise and headed for Kronstadt.

Earlier, Vyacheslav Ruksha, Deputy head of Rosatom and head of the Northern Sea Route Directorate, said in an interview with Kommersant:

"If we talk about the dismantling of the right rowing electric motor (GED, got a short circuit during commissioning), what is the reason for the "Arctic"? If the icebreaker arrives in St. Petersburg on August 10-12, it will dock at the Kronstadt Marine Plant. Preparatory work is done. The transformer, which also suddenly failed, has already been changed. Another problem is an insufficient system for removing oil vapor from the turbine, which affects the operation of RITM-200 units. The work on the turbines has also been done."

bmpd recalls that the lead nuclear icebreaker Arktika was built at Baltiysky Zavod JSC (part of United Shipbuilding Corporation JSC) The new project 22220 (LK-60YA) received damage to the right propeller motor as a result of an accident on February 4, 2020 during mooring tests. As a result of subsequent surveys and trials, it was decidedthat the icebreaker would resume testing and be delivered with an emergency electric motor with power restrictions "under certain guarantees and obligations". The acceptance certificate of the Arctic icebreaker was signed October 21, 2020 in Murmansk, after which the icebreaker with reduced full capacity took part in the winter navigation of 2020/2021 in the North. Replacement of the emergency electric motor on the icebreaker was planned to be carried out during the docking in Kronstadt in August 2021, which is now being implemented. 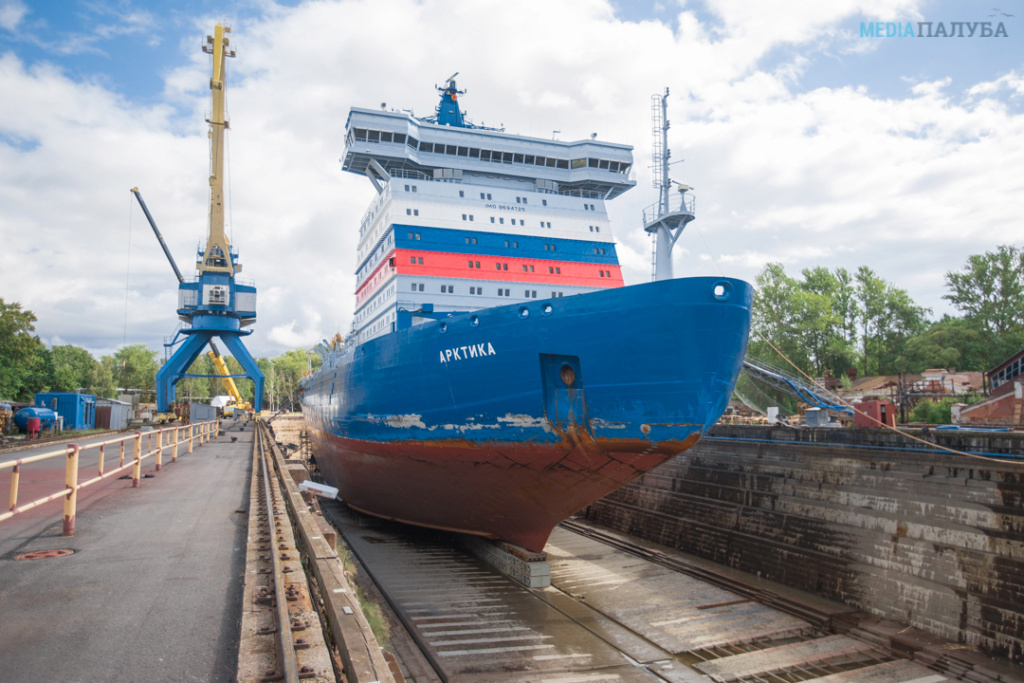 I suspect that it is more than just fixing the motor. They are probably going to do a detailed inspection of the hull and other parts.

Plus checking out the entire propulsion system perhaps... it would not surprise me if they went for something similar on the new 40K ton helicopter landing ships as they are a similar weight, though they might add other backup generators too for all the extra stuff a landing ship needs to power...
PapaDragon

kvs wrote:I suspect that it is more than just fixing the motor.   They are probably going to do a detailed inspection of the hull and other parts.


The lead universal nuclear-powered icebreaker of project 22220 "Arktika", after undergoing dock repairs, performed an interfactory transition from Kronstadt to the Baltic Shipyard . This was reported by the press service of the shipyard.

As previously reported, the ship was docked at the Kronstadt Marine Plant (KMOLZ) to carry out scheduled work to replace the propulsion electric motor (GED).

During the month that the ship stayed at the KMOLZ dock, the specialists of the Baltic Shipyard cut out a part of the outer skin of the icebreaker's hull and performed a set of operations to replace the propeller electric motor.

In addition, a number of minor works were carried out, including work on the revision of the rudder complex, bottom-side fittings and painting of the ship's hull.

The dock named after Veleshinsky, accompanied by 5 tugs, left the icebreaker on 12 September. Due to unfavorable weather conditions, the exit from the dock and the passage from Kronstadt to St. Petersburg took about 9 hours. At midnight, the ship was moored at the berth of the Baltic Shipyard and shore power was taken on board and a fire system was connected.

In the coming days, the specialists of the enterprise will begin work on the final installation of the GED, its alignment and adjustment of the systems. In mid-October, the plant is to start testing the starboard engine.

The universal nuclear-powered icebreakers of Project 22220 are the largest and most powerful icebreaking ships in the world. Their main task is to ensure year-round navigation in the Western region of the Arctic. The vessel is able to overcome ice obstacles up to 3 meters thick. Now, at the production facilities of the Baltic Shipyard, four more vessels of the project 22220 line are being built, these are the icebreakers Sibir, Ural, Yakutia and Chukotka. The ships of this project in the coming years should become the basis of the civilian icebreaker fleet of Russia. 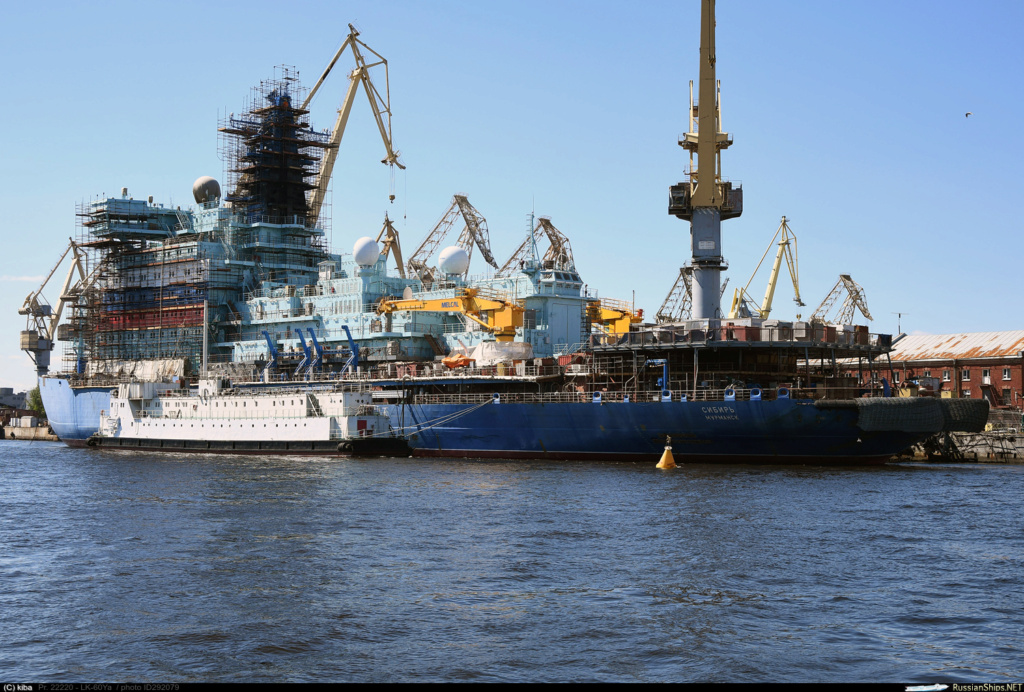 Remind me, how many ships, equal in price & complexity to a supercarrier, do they build simultaneously?* 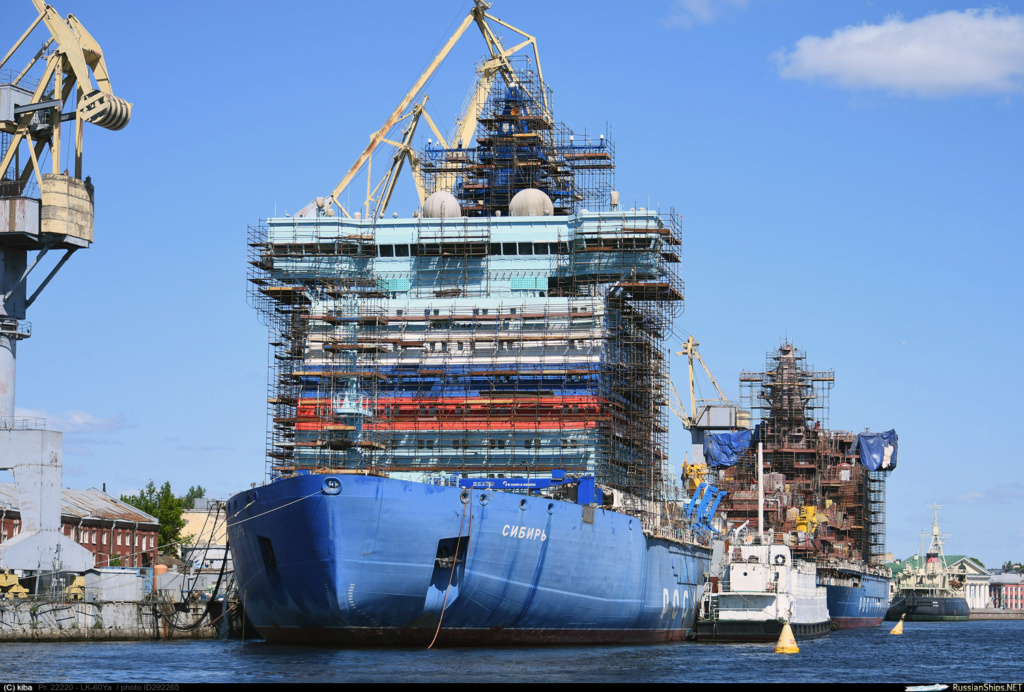 Pic is from May 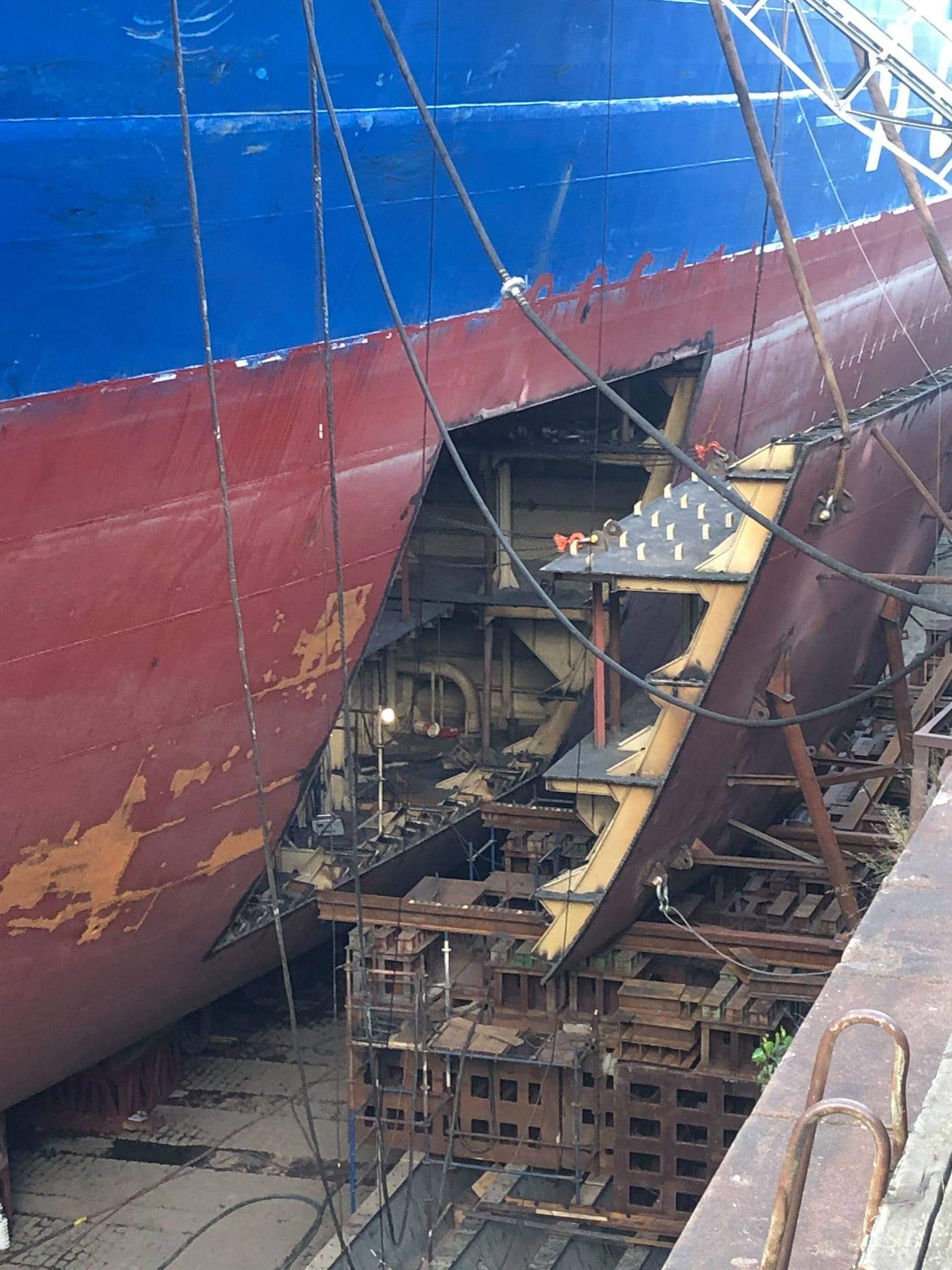 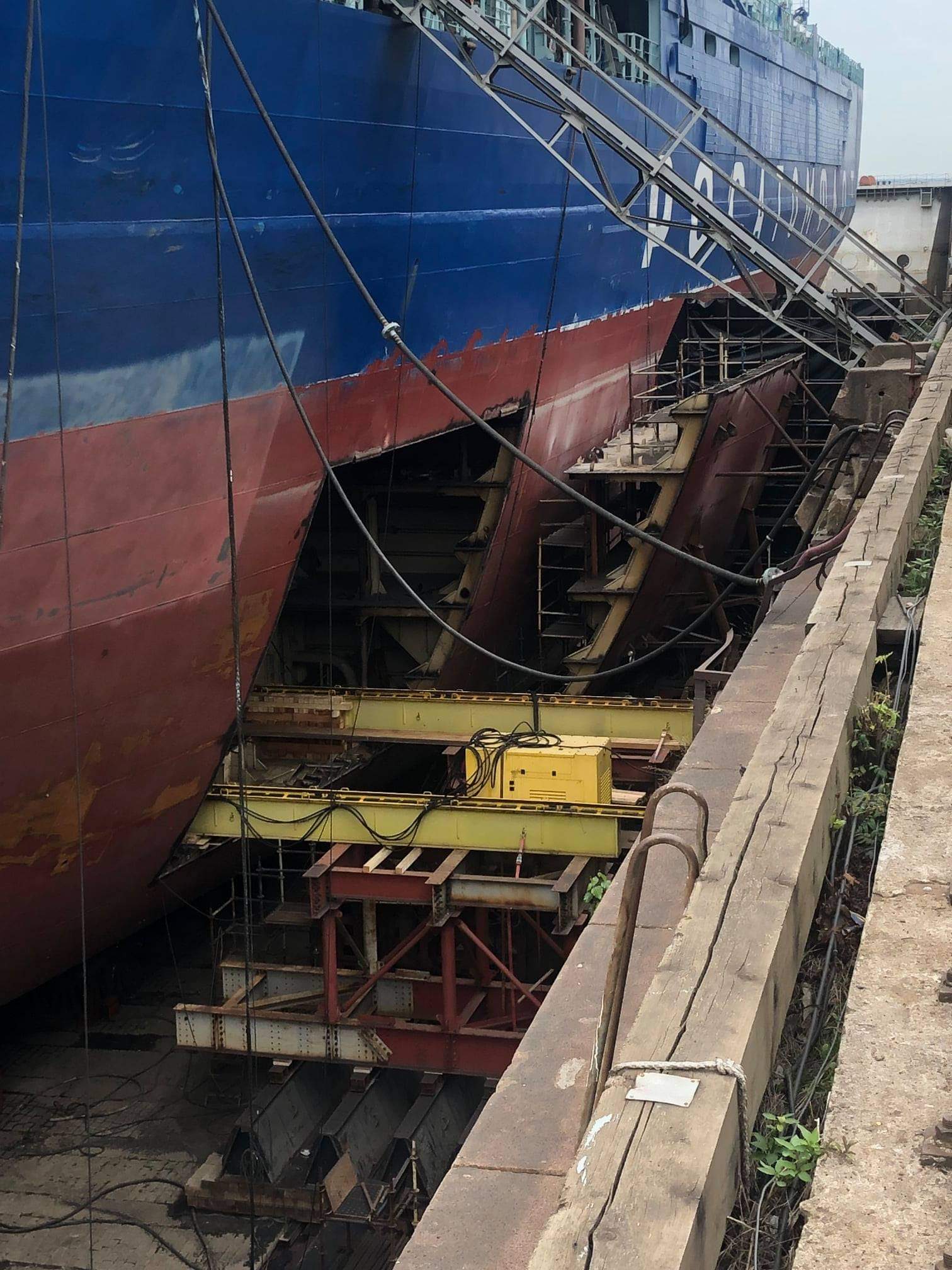 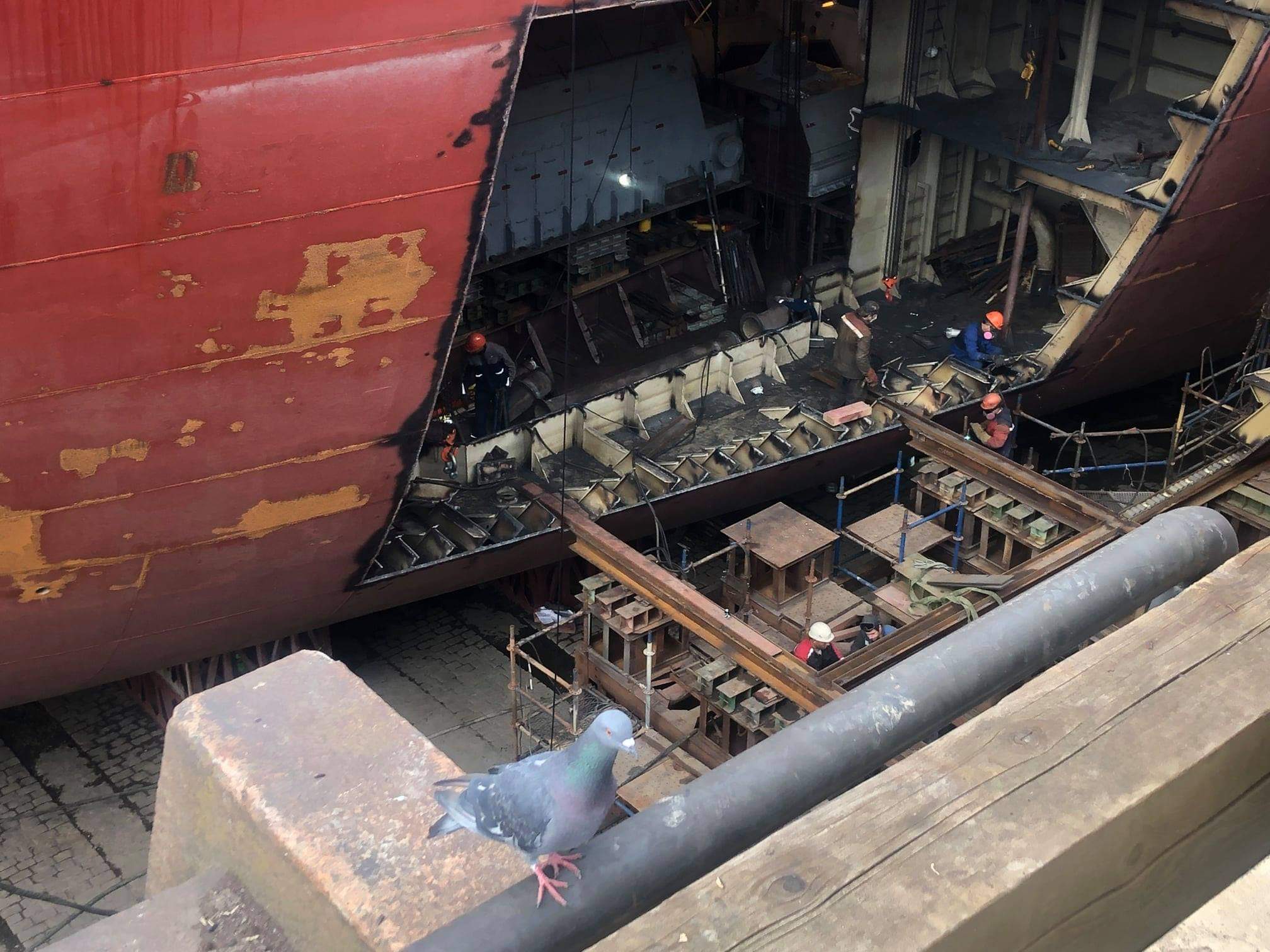 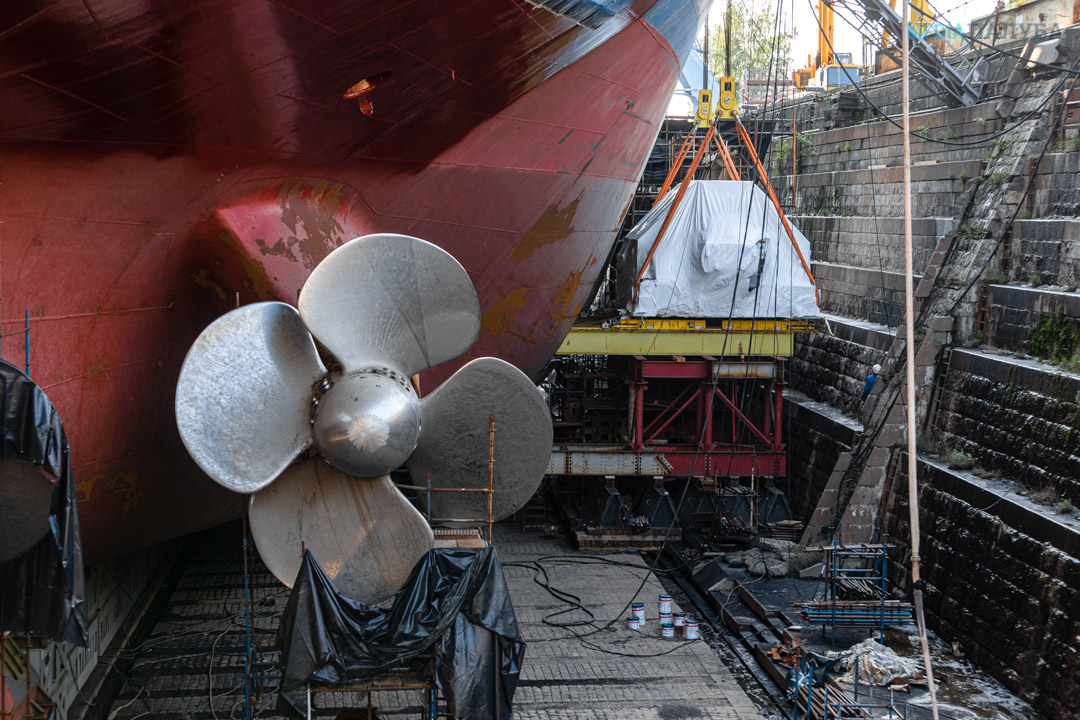 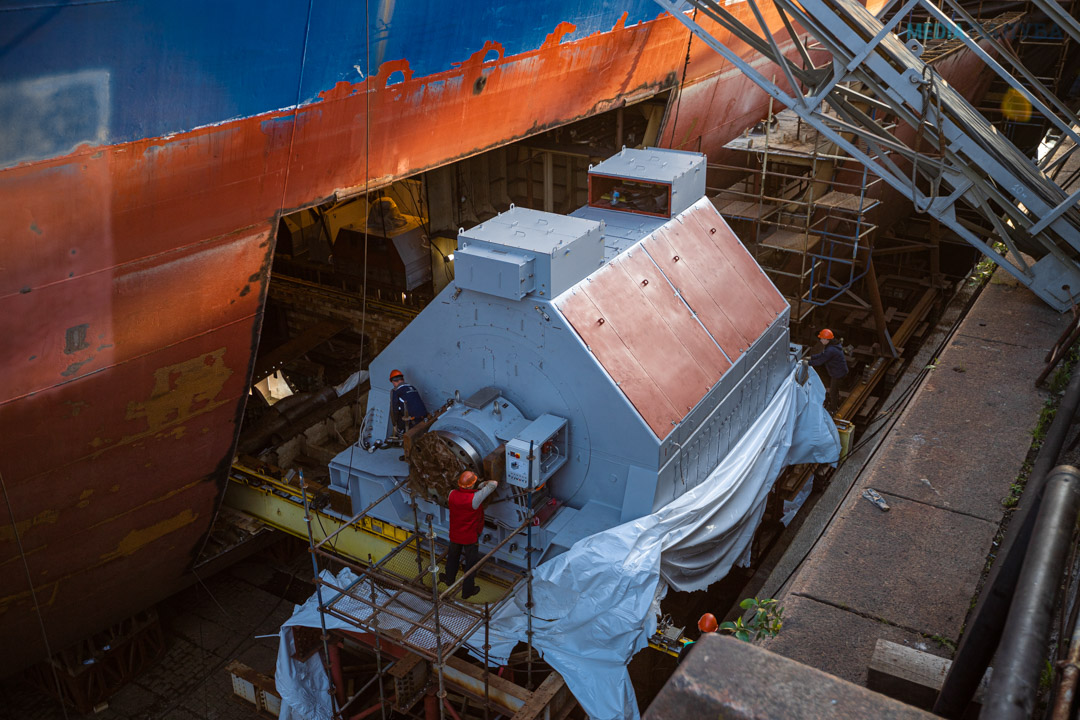 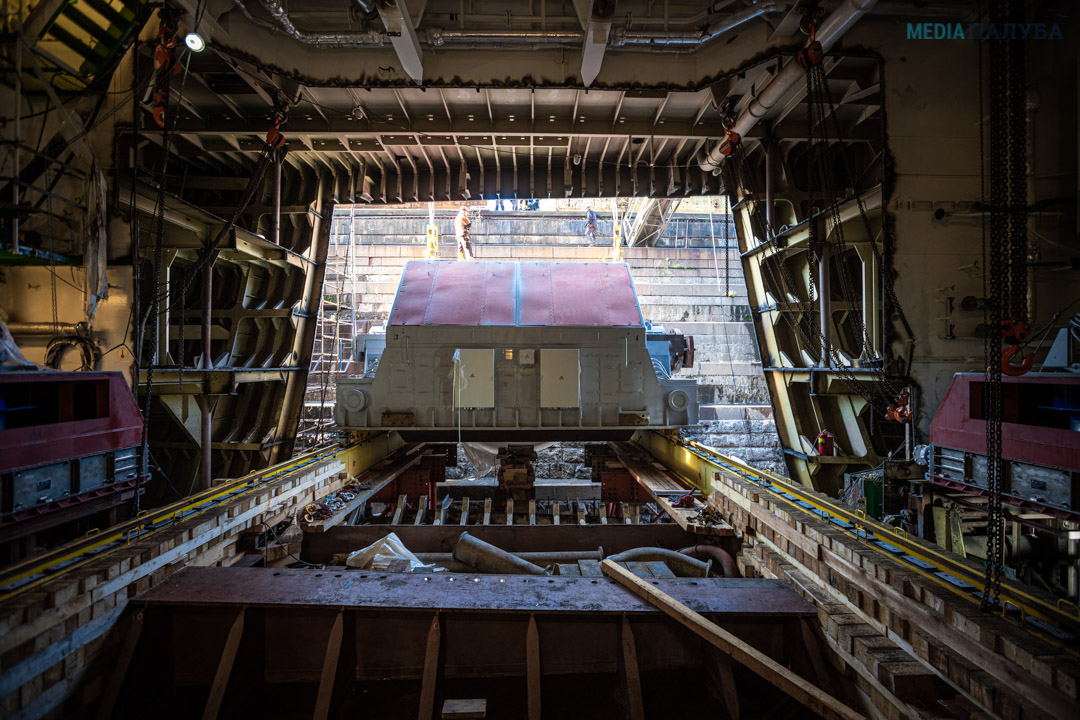 Bonus pic of all three: 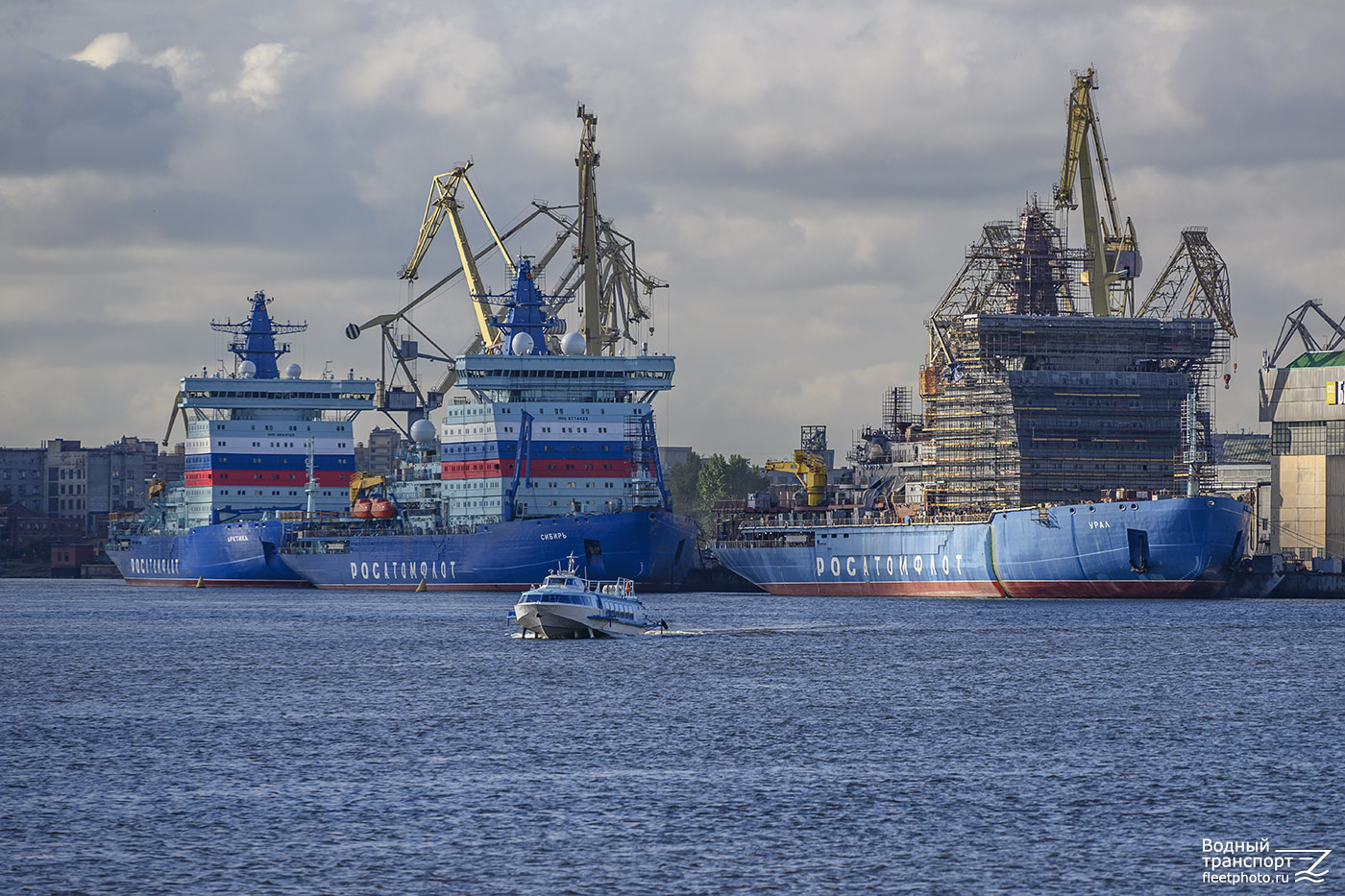 But it still needs welding. I suppose they accounted for this since doing it too often will require the plates to be replaced.

Not really.
A good quality weld can be stronger than solid steel.
Cracks will appear next to it if you apply the destructive force.
As it is a standard procedure to x-ray all the welds on production in QC check, all the welds are OK.

Some interesting shots of the Arktica reactor.

One of six electric motors was replaced on the nuclear-powered icebreaker "Arktika". Now the giant develops 81,500 hp. and will return to work at the end of the year!

Look at the nuclear reactor on the Arctica in dry dock.