limb wrote:Are there any updates on the broken motor on the first ship?

It will be replaced during first maintenance checkup

It's will be running on other two until then

What's the time table for that? Will it have to take space again at the shipyard it was built? Also I heard several components of the electrical drives and screws came from Ukraine and the US. Is there any info if they have been replaced. I heard rumors that several of the arktikas are in the water waiting for import substition and work on them has paused.

It will be done in dry dock next summer, probably in Murmansk or somewhere else up North

Just use your head here: if those two were really just floating around without being worked on all this time why would they lay down another one? Or even bigger one in the Pacific for that matter (they all share same components)

And those motors are made in Russia


Even competition is impressed:

Also I heard several components of the electrical drives and screws came from Ukraine and the US.

I hope so... this means an opportunity for a Russian company to sell products and make money, while making Ice Breaker production more sanction proof.

Winter is coming but I am not aware of any huge shortage of ice breakers at the moment so a few ships waiting for parts is not the end of the world...
George1


The second and third icebreakers - "Siberia" and "Ural" - are being finalized on the outfitting quay. Siberia is preparing to load nuclear fuel. Electrical work is underway at the Ural. 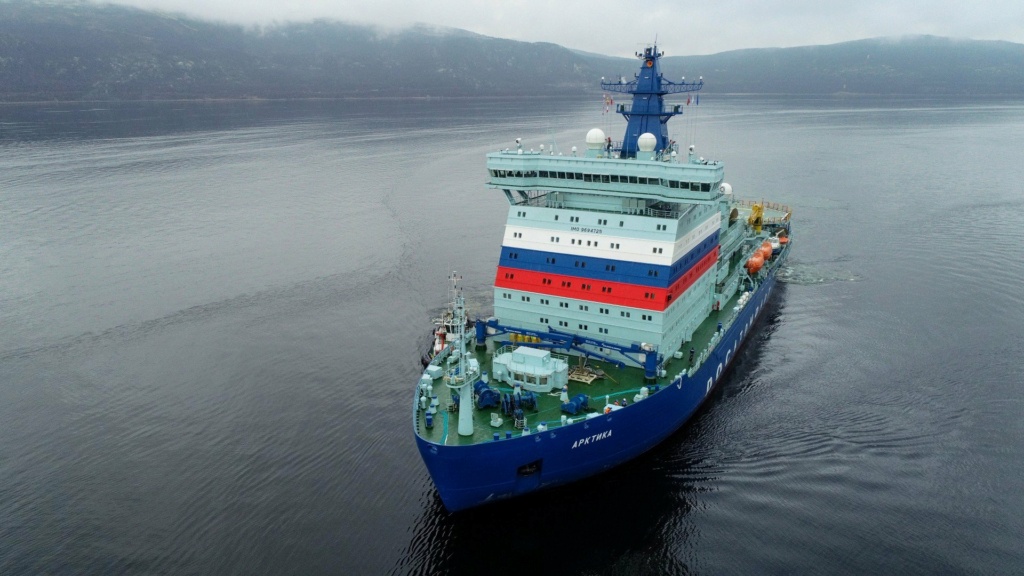 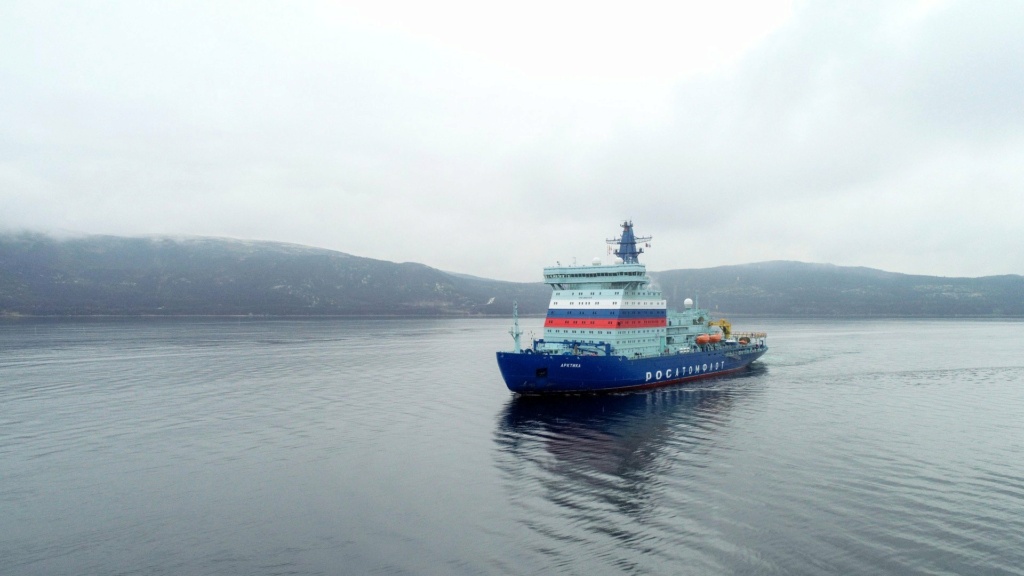 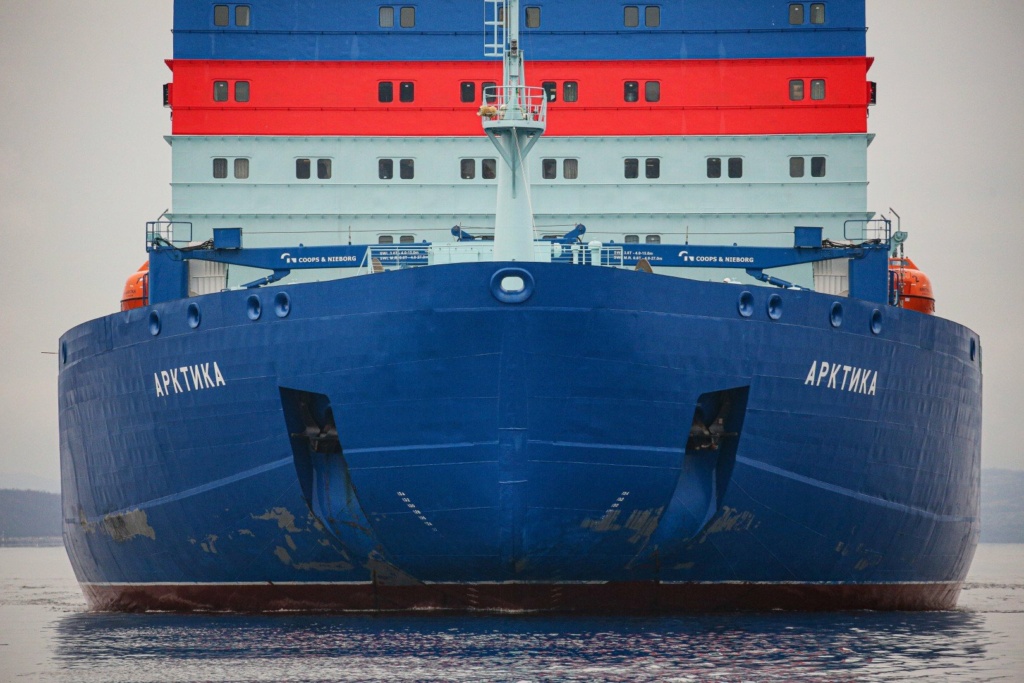 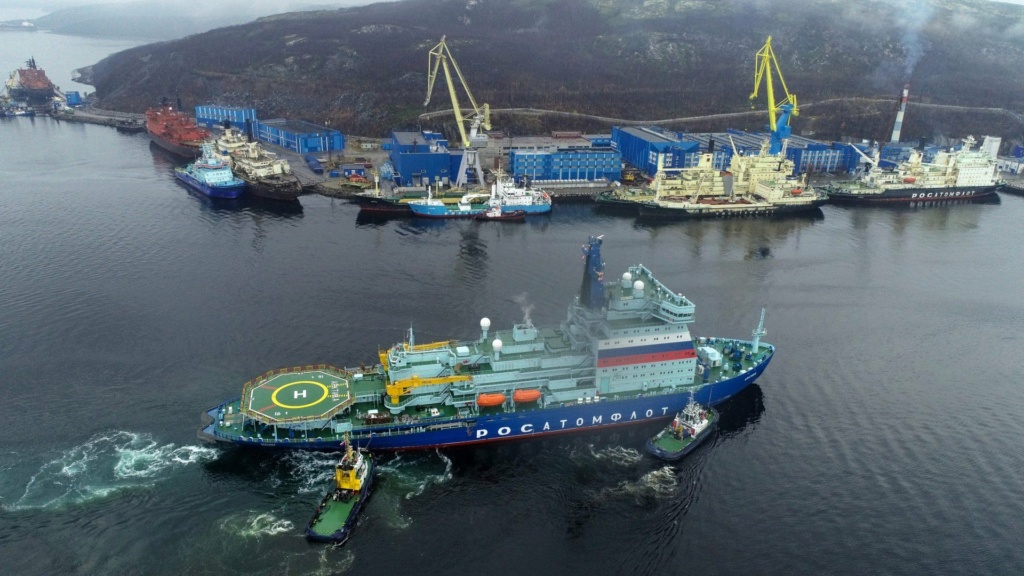 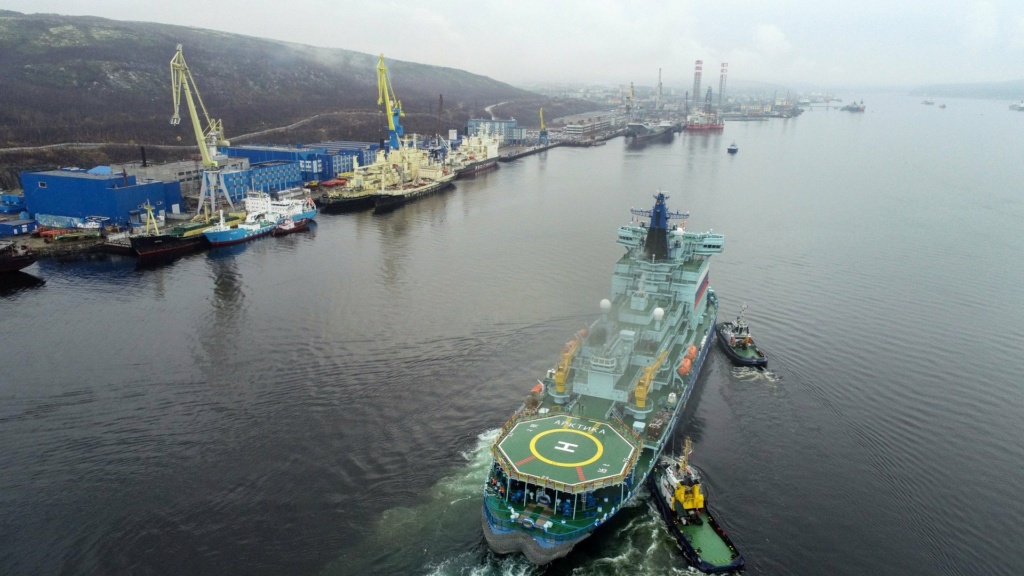 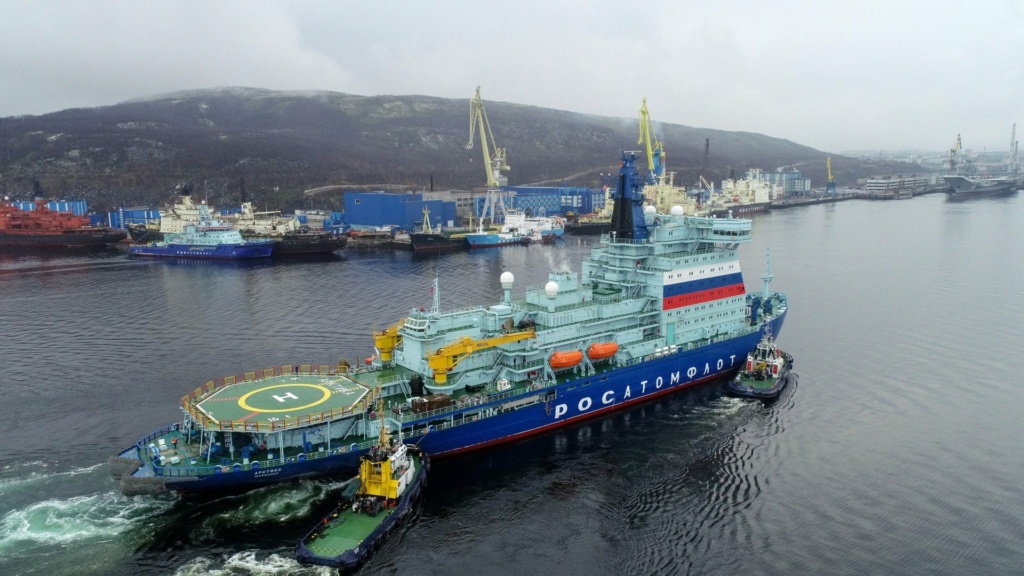 Lots of icebreakers in the background. 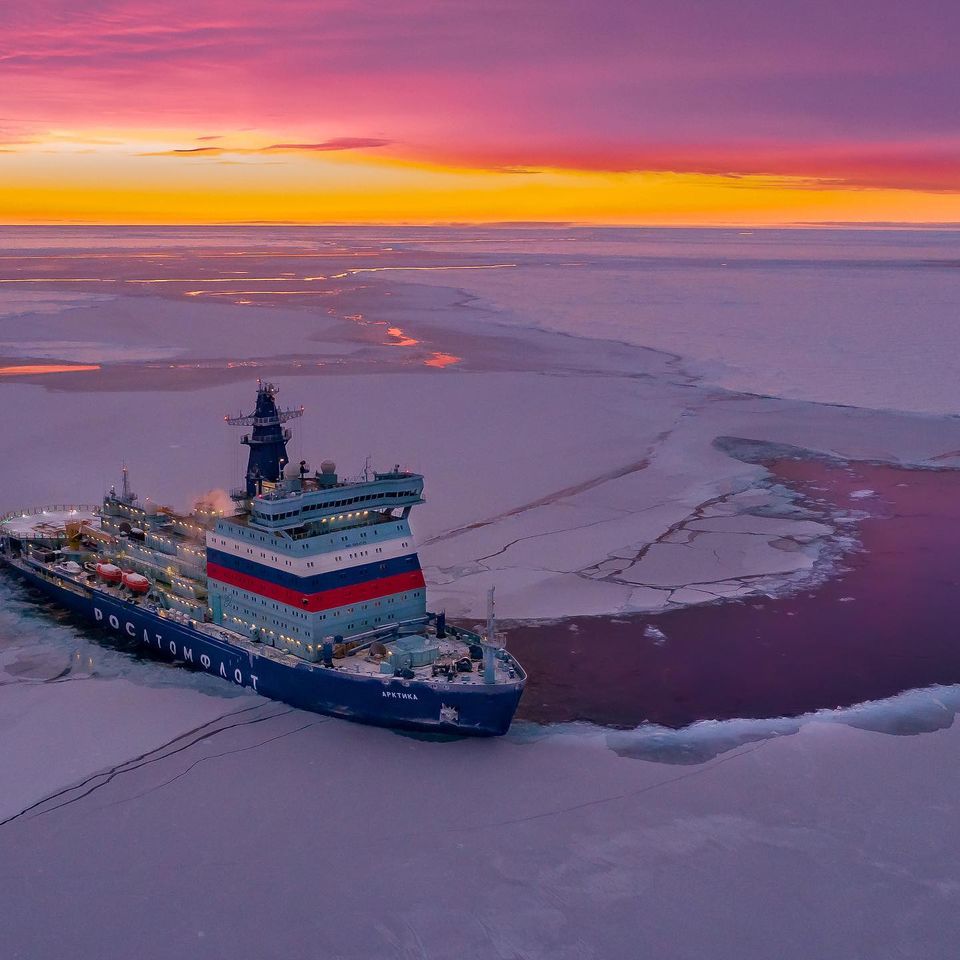 Even the color of the superstructure looks good in that light.

Hole wrote:Even the color of the superstructure looks good in that light.

That's quite an accomplishment, color choice is abysmal

Why didn't they just go with white or solid blue like the hull?

PapaDragon wrote:
That's quite an accomplishment, color choice is abysmal

Why didn't they just go with white or solid blue like the hull?

Its got that mint ice cream color going on - very cool. 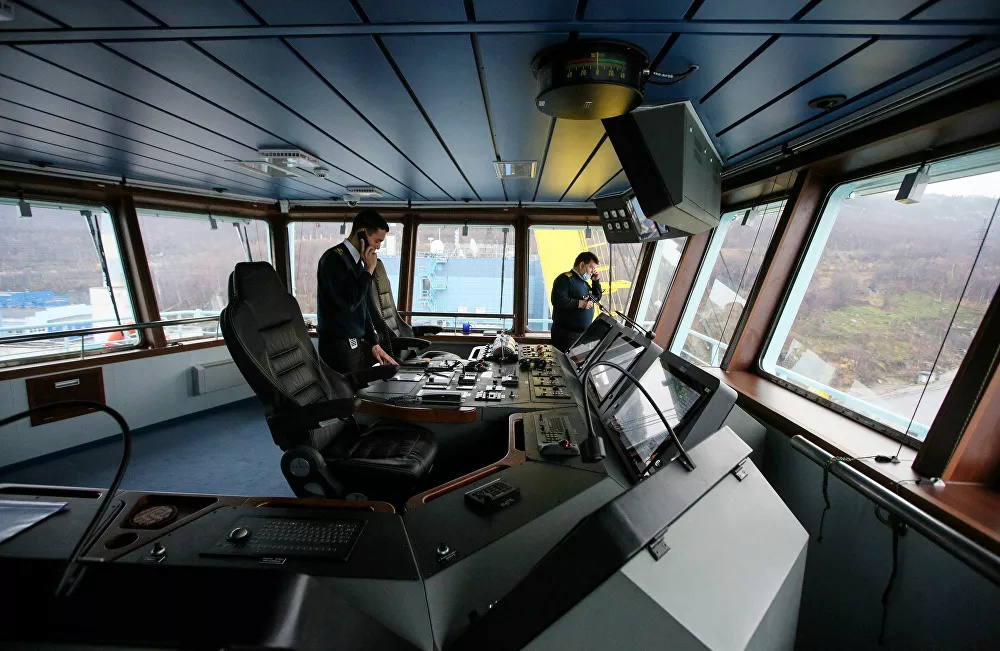 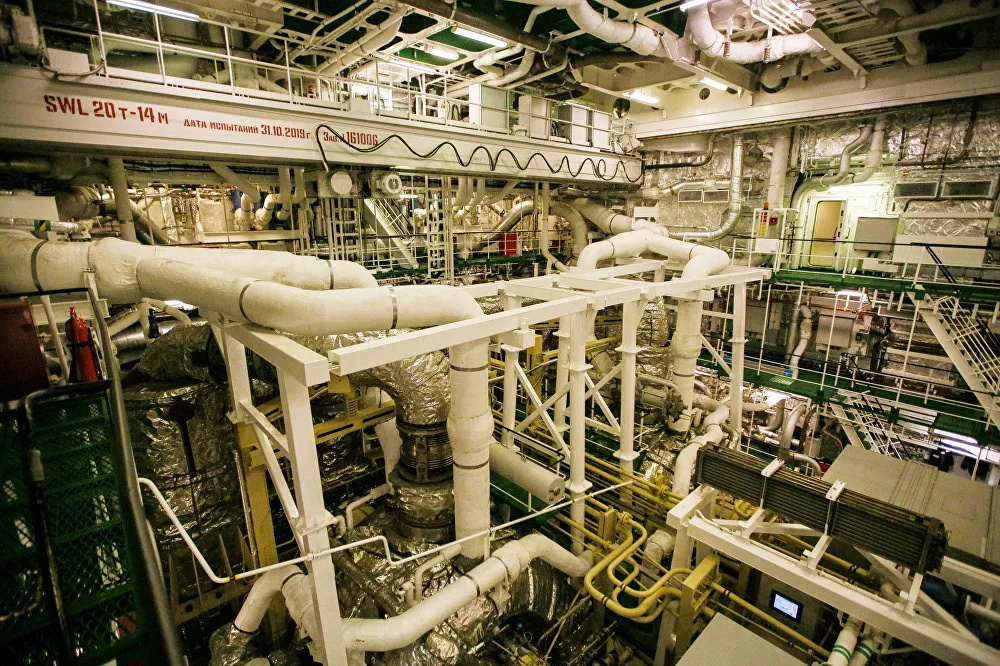 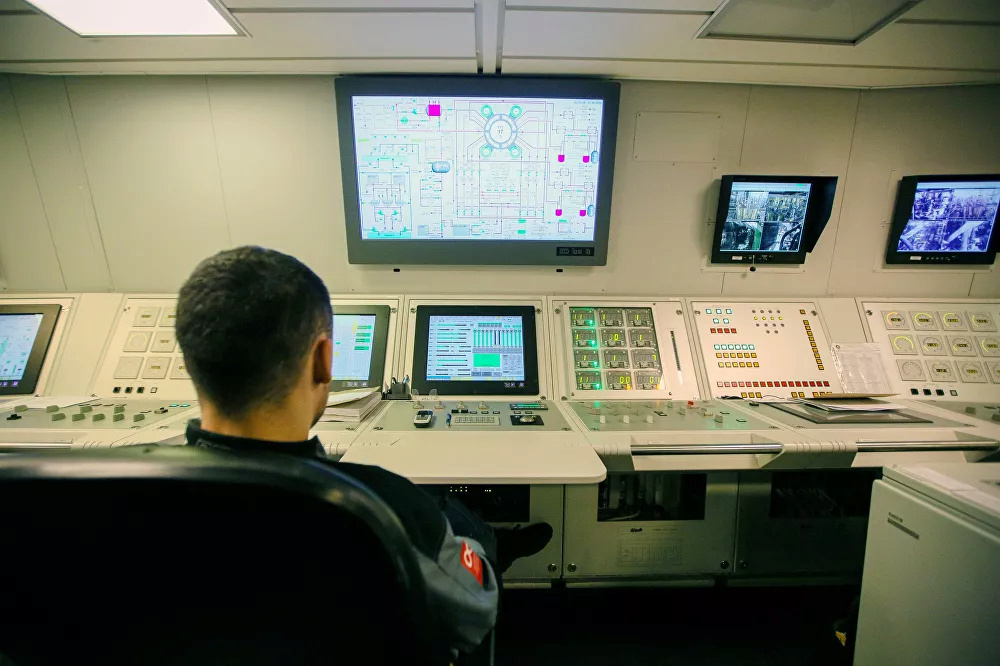 There is lots of bitching on this forum about how "long" it takes for Russia to build various ships. The Arktika was laid down in 2013 and is
now commissioned. So that took 7 years but it is a new design. By contrast, the yanquis are claiming that they will finish their first new
icebreaker by 2024. That is less than 4 years since I doubt any of the four planned ships have been laid down since financing has been
determined for only two of them. So the deals are not even complete.

Anyone who believes that the yanquis will finish their new icebreaker in 2024 needs to put the crack pipe down. Even if it is smaller
than the Arktika and not nuclear powered, the idea that one will be popped out in under four years is absurd. It is a new design so
by definition the first ship will take longer. So what we are hearing is a construction time frame for established production for an
individual ship (the total batch can be produced in parallel). This is the sort of BS koolaid that people drink and then run around on this
forum bitching at Russia for "failing". 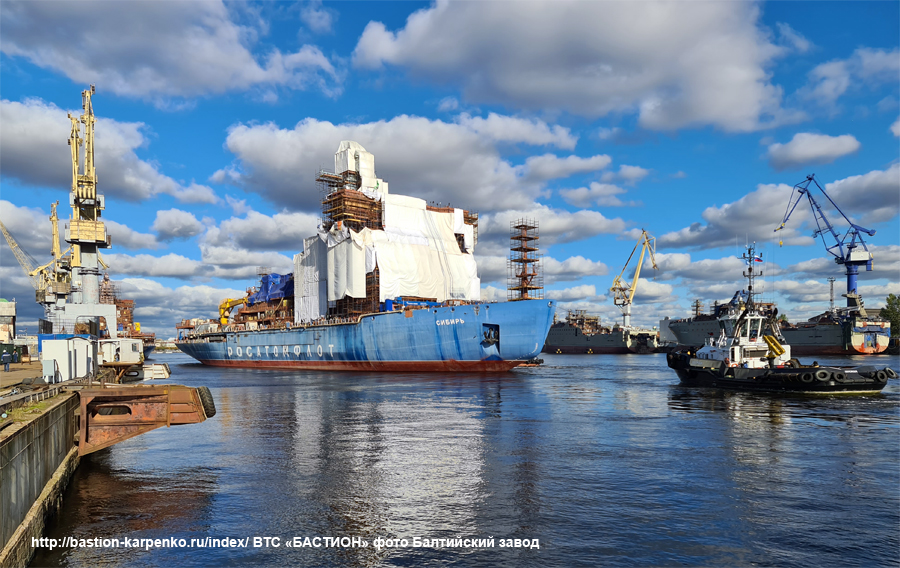 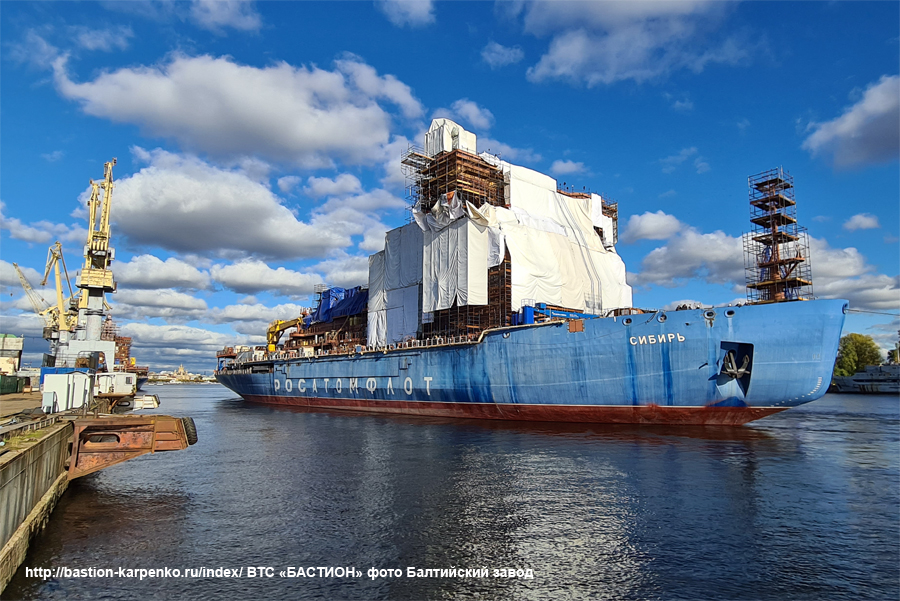 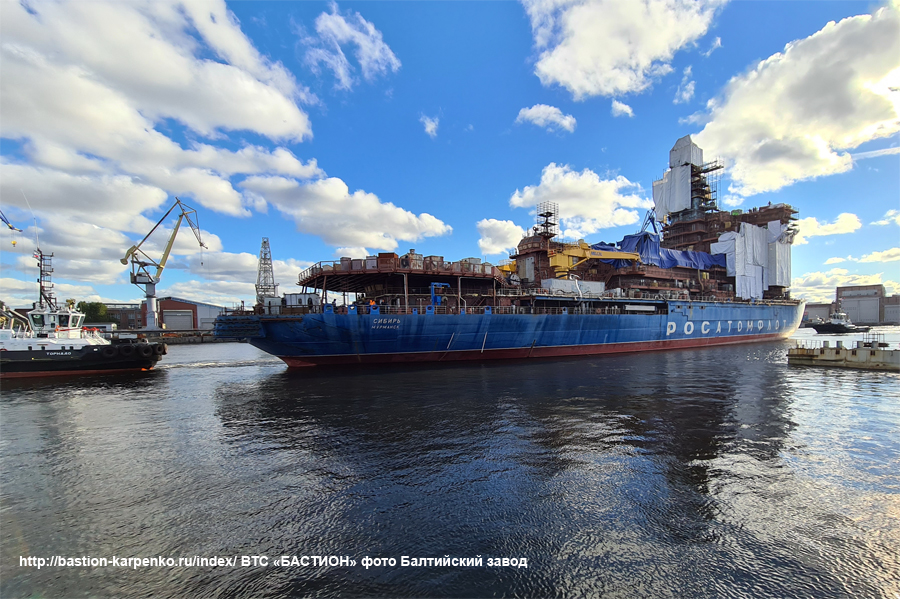 Arktika plowing through the waves in the Barents Sea.

Arktika interior filmed before going to Murmansk. Spare screw blades are standard for Arctic Ocean conditions since plowing through ice is not
like going through water.

Note the young engineer who was involved in building the power plant. Russia has successfully transitioned to a new generation of skilled
workers. This is a major achievement since the 1990s and into the early 2000s were a period when all of the skills could have been
lost since jobs were not available. America has experienced skills loss since it thinks that laying off people and doing nothing for 40 years
has no consequences. Westinghouse and New Port News are learning that life ain't so simple.

On the part of bmpd, we recall that in September 2019, Pella OJSC (Otradnoye, Leningrad Region), unexpectedly for all participants in the shipbuilding market, following an open tender, received a contract from FSUE Rosmorport for the construction of the first of two modified linear diesel-electric icebreakers of project 21900M2 for Far East (and, obviously, will receive a contract for the construction of the second) - despite the fact that three icebreakers of the 21900M project for the North were previously built at PJSC Vyborg Shipyard.

Linear diesel-electric icebreaker of project 21900M2 with a capacity of 18 MW ice class Icebreaker7 should be built in accordance with the Comprehensive plan for the modernization and expansion of the main infrastructure for the period until 2024 to ensure year-round operation of the freezing seaports of the Far East basin. The cost of the contract is 7.54 billion rubles, allocated from the federal budget. The vessel is scheduled to enter service in 2024.

The award of the contract was a consequence of the fact that Pella was the only participant who submitted an application for the Rosmorport tender announced in August 2019 for the construction of icebreakers of project 21900M2, and of course was recognized as the winner of the tender.

At the same time, since Pella at its main site in Otradnoye does not have sufficient capacities for the construction of such large vessels as icebreakers of project 21900M2, it was assumed from the very beginning that the construction of icebreakers would be carried out at the German company Pella - the Pella Sietas shipyard in Neuenfelde (Hamburg region on the southern bank of the Elbe). This is the former shipyard of JJ Sietas KG Schiffswerft GmbH u. Co., which has existed since 1635, and after bankruptcy acquired by Pella in 2014. The Hamburg shipyard has the ability to build ships up to 180 meters long and up to 40 meters wide, with a dry dock of appropriate dimensions. The icebreaker of project 21900M2 has become the largest order in the history of this German shipyard both in terms of cost and size.

Earlier in 2012-2016, by order of FSUE "Rosmorport" at the Vyborg shipyard, three linear diesel-electric icebreakers "Vladivostok", "Murmansk" and "Novorossiysk" of project 21900M with a capacity of 18 MW were built. It is reported that these icebreakers have proven themselves well during operation in various conditions, including in the Arctic seas, showing their high efficiency and reliability. During the period of full-scale ice tests of ships, indicators were achieved, including those in icebreaking, exceeding the calculated ones. This made it possible to update the project 21900M.

The new project 21900M2 icebreaker was developed on the basis of the 21900M project and the draft icebreaker design developed by JSC KB Vympel at the expense of FSUE Rosmorport's own funds, taking into account modern international convention requirements, including the reduction of harmful emissions from marine engines. The ice class of the new vessel has been increased to Icebreaker7. 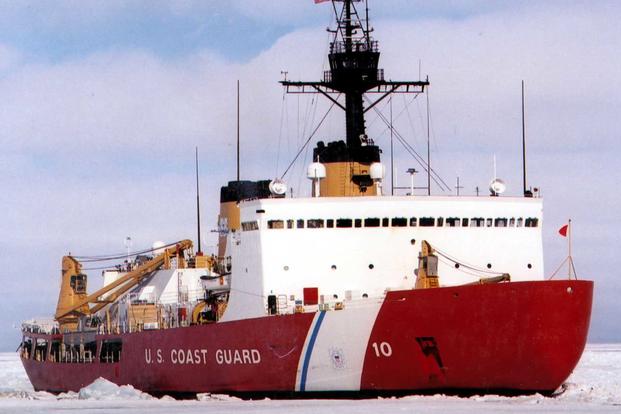 THAT is what the muricanz call an "icebreaker"? Hilarious...

Pathetic America waving its dick around about pushing Russia out of the Arctic (as if Russia does not have the longest Arctic coastline)
has to divert what few icebreakers it has form the Antarctic to the Arctic. What are you going to do with this rustbucket, you retards?
Run it up and down Russia's coast and yell hate at Russians?

Like the Admiral in front of congress who refused to send ships to the Arctic in fear he had to ask the russians for help if there sole working icebreaker would break down. 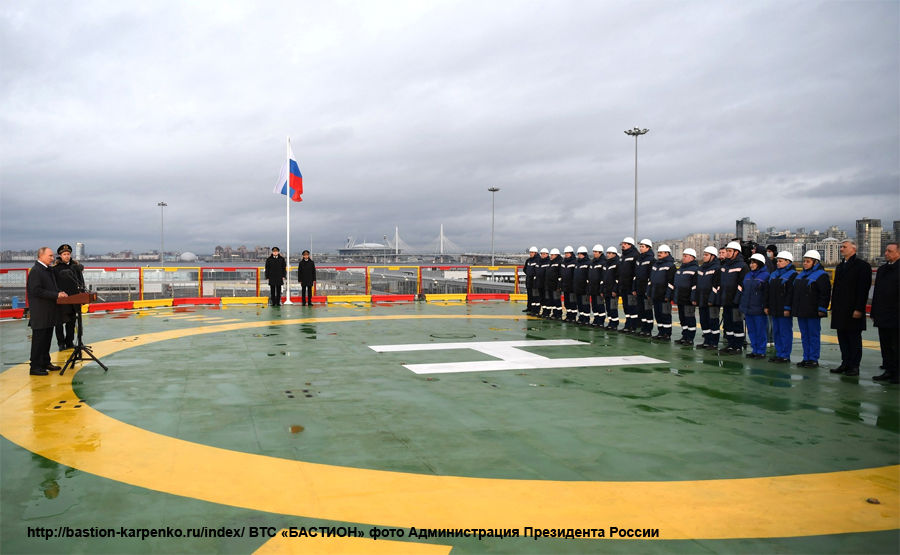 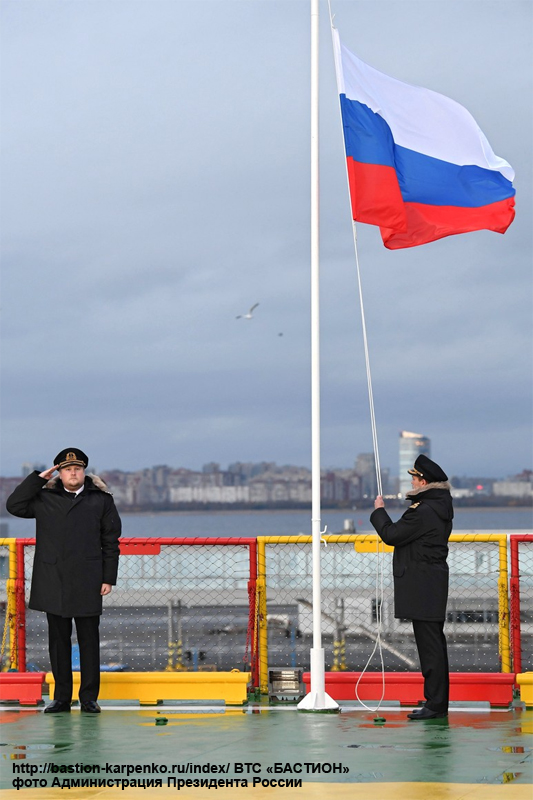 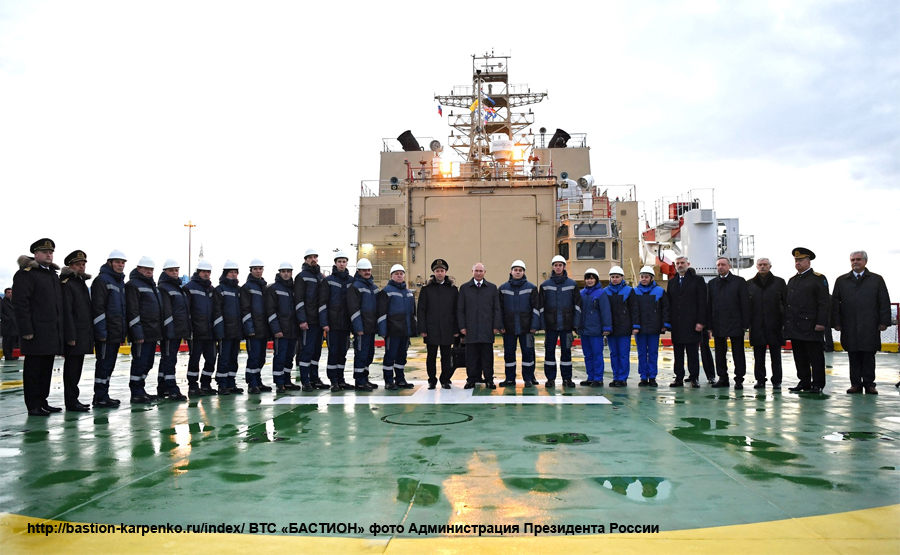 Chernomyrdin is in service now! 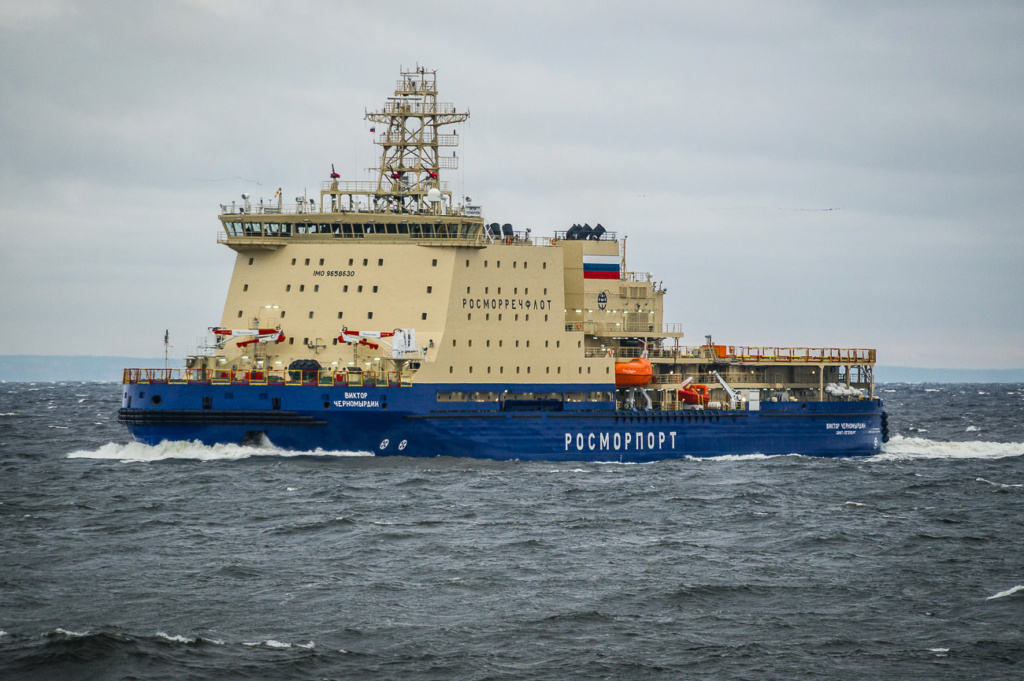 Some pics from Mr. Aminov 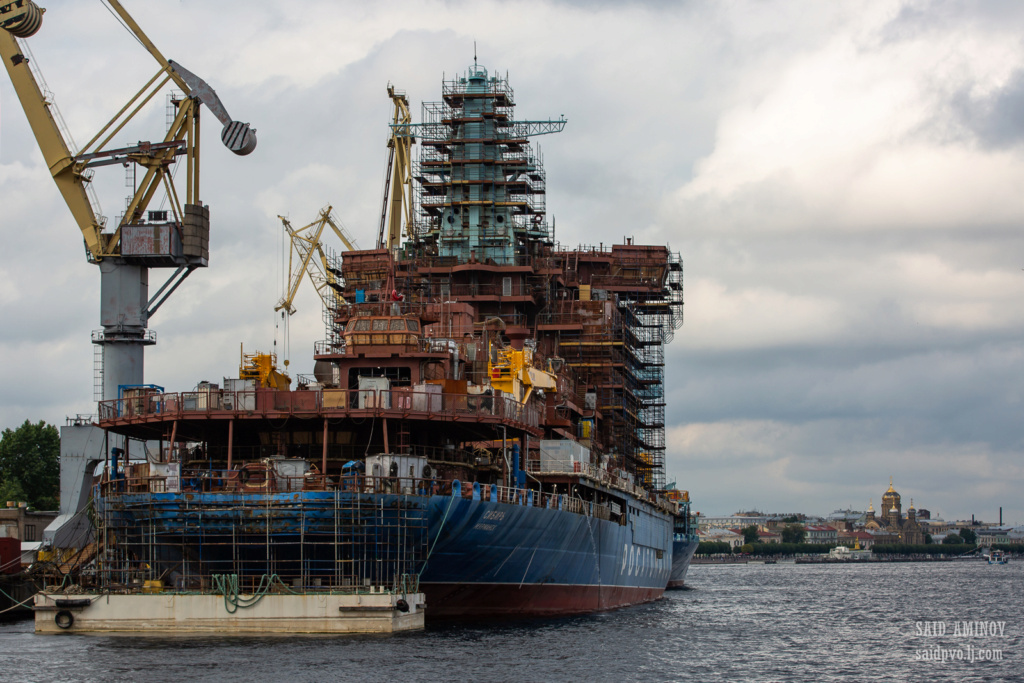 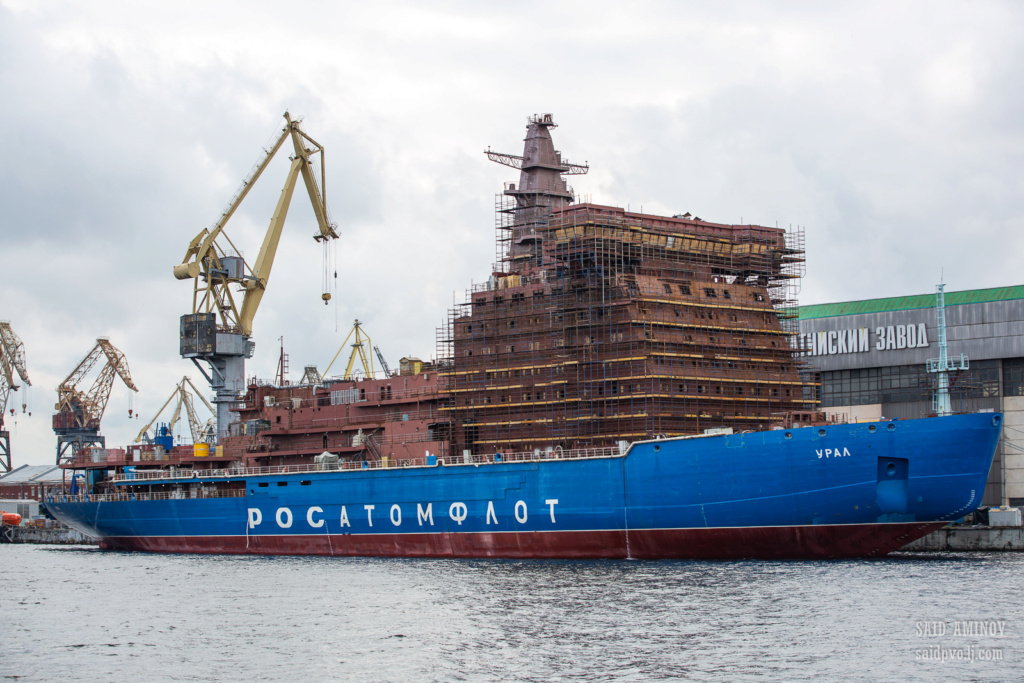 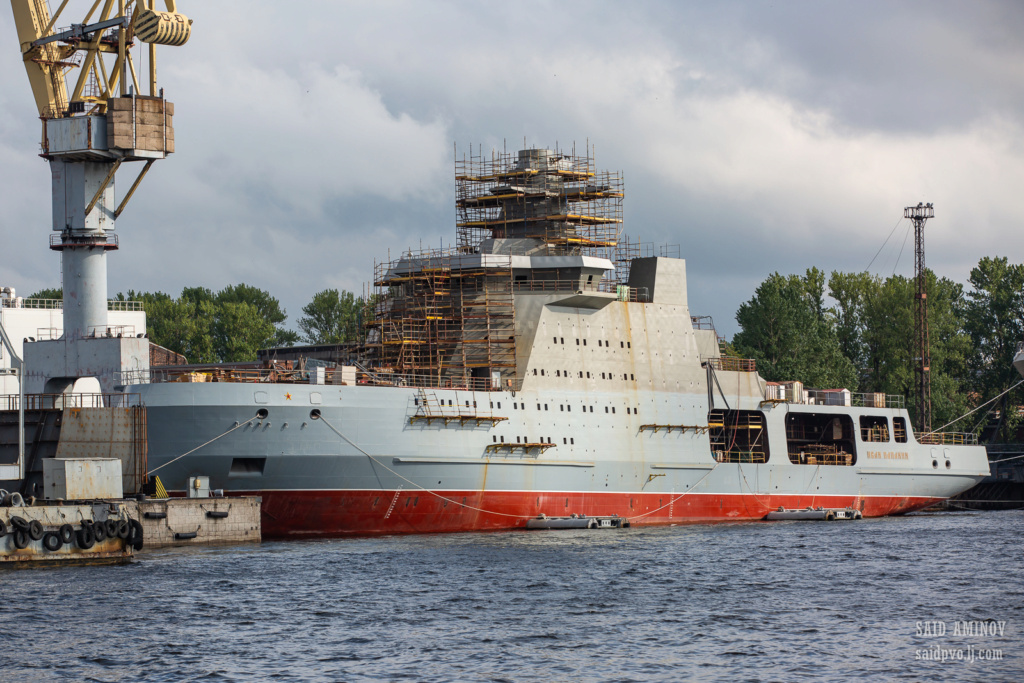 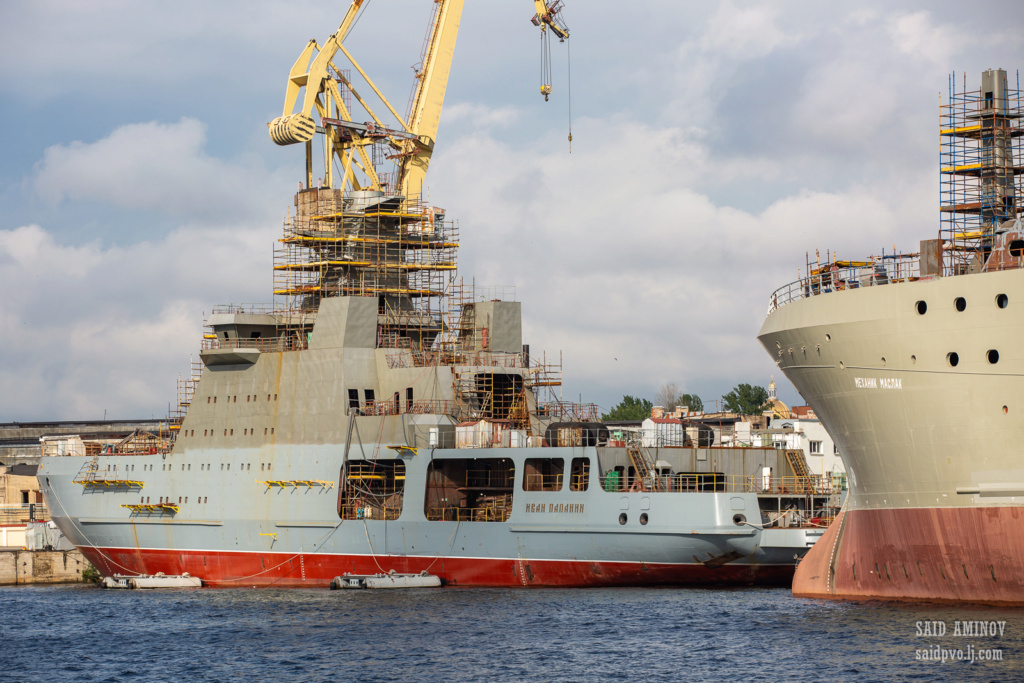