dino00 wrote:The cost of creating two icebreakers of the project 22220 will be about 100 billion rubles

SAINT-PETERSBURG, December 5th. / TASS /. The construction of the fourth and fifth nuclear icebreakers of the project 22220 will cost about 100 billion rubles. Alexey Smirnov, Project Manager 22220 at the Baltic Shipyard, told this to journalists on the sidelines of the Arctic: Present and Future Forum.

Earlier, a TASS source in industrial circles of St. Petersburg announced that a contract for the construction of the fourth and fifth icebreakers 22220 could be concluded with the Baltic Shipyard in the first quarter of 2019. Later, the deputy head of the Directorate of the Northern Sea Route, Maxim Kulinko, stated that the construction of these vessels would use a mixed financing scheme.

The two icebreaker cost as much as a nimitz carrier.

your values are way wrong

And are way more profitable
magnumcromagnon

That's beside the point. They definitely do not cost $4 billion a piece.
Tsavo Lion

Due to the use of variable draft, the icebreakers of this project are able to work equally effectively both in deep water and in shallow water in the beds of Siberian rivers. This feature allows these icebreakers to replace both icebreakers of the " Arctic " type and the " Taimyr " type and, therefore, to reduce the total cost of operating the atomic icebreaking fleet, while fully retaining all its capabilities.
https://ru.wikipedia.org/wiki/%D0%9B%D0%B5%D0%B4%D0%BE%D0%BA%D0%BE%D0%BB%D1%8B_%D1%82%D0%B8%D0%BF%D0%B0_%D0%9B%D0%9A-60%D0%AF
Singular_Transform

That's beside the point. They definitely do not cost $4 billion a piece.

The two icebreaker cost as much su34 as many f18 can be bought from the price of a nimitz.

Just a photo of Akademik Fedorov in Antarctica: 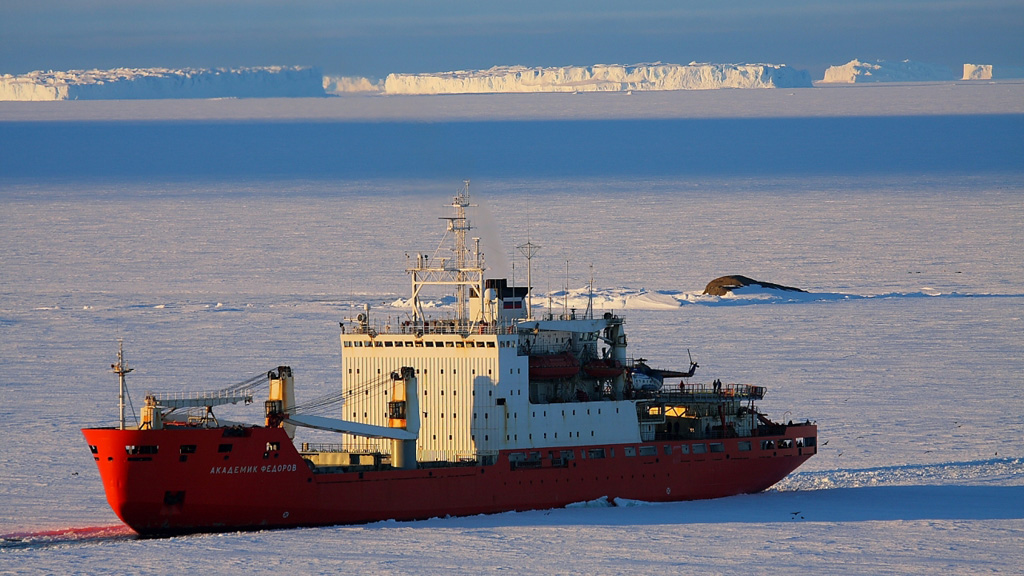 Icebreaker Evpatiy Kolovrat has been laid down In St. Petersburg

Replacement for yet another one-off fiasco class Iliya Muromets... 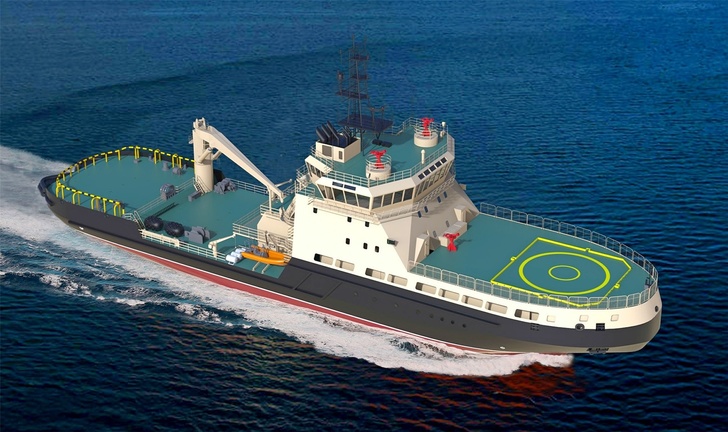 The vessel is almost 122 meters long and 26 meters wide

ST. PETERSBURG, December 20. /TASS/. An official presentation of the Andrey Vilkitsky, an icebreaker built for Gazprom Neft’s Novoportovskoye deposit, was organized in downtown St. Petersburg, a TASS correspondent on board the icebreaker reported on Thursday.

"The icebreaker will arrive [to the destination] in late January already," Gazprom Neft’s representative Denis Sugaipov said during the official ceremony. "After the ceremony, it will depart and along the Northern Sea Route will come directly to the Ob Bay."

The Andrei Vilkitsky icebreaker was built at the Vyborg Shipyard. It is Finland’s project IBSV01. Another icebreaker, the Alexander Sannikov, which was ready in summer, 2018, is also made under the Time of Arctic program. The icebreakers have similar specifications and they are most mighty icebreakers in their class in Russia. They will work in the Ob Bay, assisting in development of the Novoportovskoye deposit.

The icebreaker may be used to escort vessels, to be a supply vessel for oil platforms in the Arctic. It may be used in overcoming oil spills, in extinguishing fires at other sea facilities and as a search vessel.

The vessel is almost 122 meters long and 26 meters wide. The Andrey Vilkitsky can break two-meter-thick ice at the speed of about two knots. The icebreaker is ecology-focused - all the waste is kept on board for further processing ashore. Arktika has been relocated: Not yet, just relocated for final phase of construction but it's getting there.

I'm still not sold on paintjob though but I guess we'll have to wait until we see it against white backdrop.
dino00

Nuclear icebreaker "Ural" plan to launch in May

S.-PETERSBURG, Mar 15 - RIA Novosti. The universal nuclear icebreaker "Ural" of the project 22220 is planned to be launched in May 2019, according to the message of JSC "Baltic Plant" (part of the United Shipbuilding Corporation).
To date, the experts of the Baltic plant have loaded the last bow section of the tank deck (section 1801) onto the icebreaker Ural, completing the formation of the entire hull of the nuclear-powered icebreaker.

Now the shipbuilders will have to work on the formation of the superstructure and carry out a set of works on the preparation for the solemn launch of the water order in May 2019," the report said.

Three new universal nuclear-powered icebreakers of the project 22220 are under construction at the Baltiysky Plant in St. Petersburg at the request of Rosatom: the head icebreaker Arktika and the first production icebreaker Siberia are launched. The commissioning of these icebreakers was originally planned for 2017, 2019 and 2020, respectively, but then these dates were repeatedly postponed. Among the reasons for this were problems with the supply of turbine equipment for icebreaker propulsion systems. At present, the customer has been designated 2019, Siberia, 2020, and Ural, 2021, as the date of delivery for the Arctic.

Universal nuclear icebreakers of the project 22220 with a capacity of 60 MW will be the largest and most powerful in the world compared to the existing nuclear powered ships. They are needed to ensure Russian leadership in the Arctic. The length of the vessel will be 173.3 meters, width - 34 meters, displacement - 33.5 thousand tons. These icebreakers will be able to conduct caravans of ships in arctic conditions, breaking through ice up to 3 meters thick. They will provide ships with hydrocarbon feedstock from the fields of the Yamal and Gydan peninsulas and from the Kara Sea shelf to the markets of the Asia-Pacific region. Earlier it was reported that two more nuclear icebreakers of the project 22220 would be built at the Baltic Shipyard.

Same. I say paint it red... That will get the seppos a-clucking...

The colour scheme is perfect for making it invisible on the horizon. Ice scatters blue light preferentially (that is why icbergs calving from glaciers can appear blue).
Real stealth, not fanboi angle fetish stealth

In a snow storm it will be the lights that matter, but having distinct colours and solid colours rather than patchy colour patterns is what is important.

For people working on board you don't want to dazzle them with the light reflecting off its surface on sunny days...
George1

Baltic Shipyard formed the hull of the mighty "Ural"

"Ural" is the third nuclear-powered icebreaker of Lk-60Ya class together with the sister ships "Arktika" and "Sibir" she is being built by the Baltic Shipyard, Saint Petersburg. 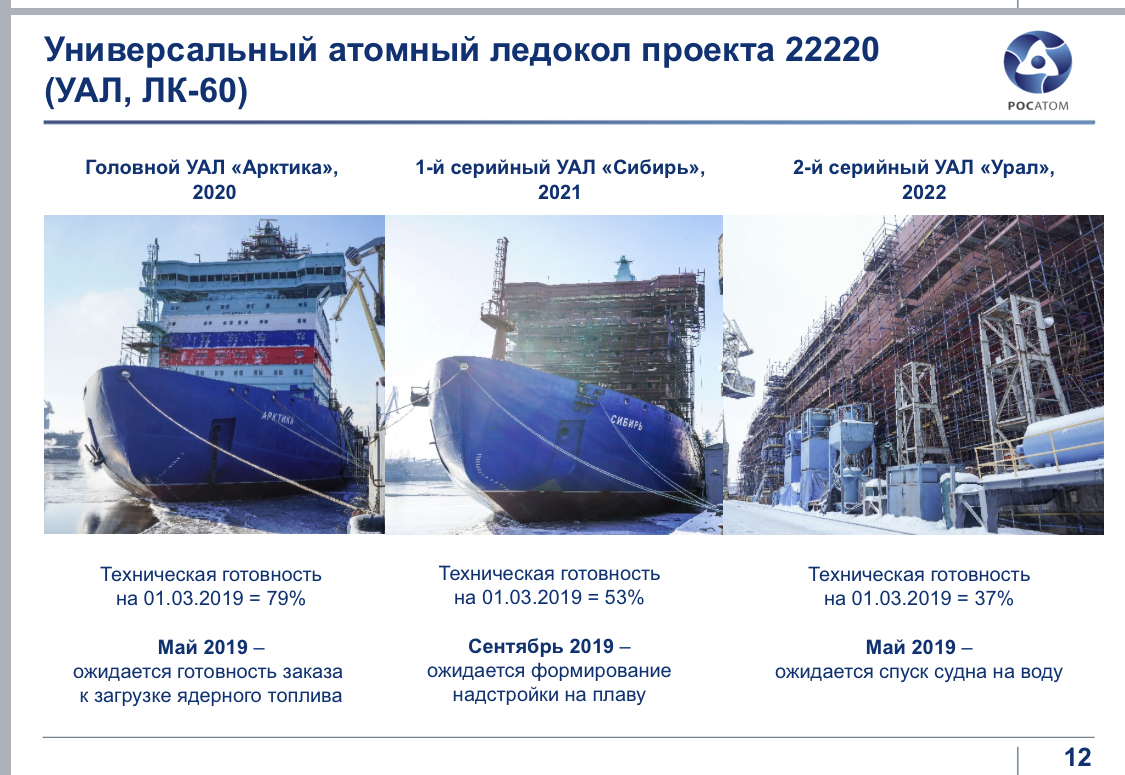 Red and gold with a large star on the bow deck and 2 on the sides of the bridge.

St. Petersburg. April 9th. INTERFAX - Russia's Arctic fleet by 2035 will have at least 13 heavy icebreakers, including nine nuclear ones, said Russian President Vladimir Putin at a plenary session of the Arctic Forum on Tuesday.
"Three new nuclear icebreakers are currently being built in St. Petersburg: the Arctic, Siberia and the Urals. By the year 2035, Russia's Arctic fleet will consist of at least 13 heavy linear icebreakers, including nine nuclear ones," the president said.
https://www.militarynews.ru/story.asp?rid=1&nid=505774&lang=RU
George1

The investments in the icebreaker's construction will total $572 million

MOSCOW, April 26. /TASS/. The construction of the Arktika universal nuclear-powered lead icebreaker will be completed in 2020, according to a government resolution posted on the government’s legal information web portal on Friday.

The government resolution’s previous version indicated that the icebreaker would be built in 2019. The investment in the Arktika icebreaker project has remained unchanged at about 37 billion rubles ($572 million).

What about Leader project?

Worry about the utter lack of any projects in the self-anointed masters of the universe land, the USA.

The USA has big plans to cruise year round in Russia's EEZ showing Russia who is the boss. With their
one functional ice breaker. LOL.