He even copied the picture too. A lot of copycats on this forum it seems.
GunshipDemocracy

Comparing Pantsir on BAZ and Kamaz chassis is looks like either BAZ is fairly small vehicle or Kamaz is really big beast.
George1

And MZKT, MAZ make better trucks than BAZ - but they're Belarussian and so for some reason that means that we have to weave off them

One of the air defense units of the Western Military District deployed in northwest Russia, rearmed with a modern air defense missile-gun system "Pantsir-S1". 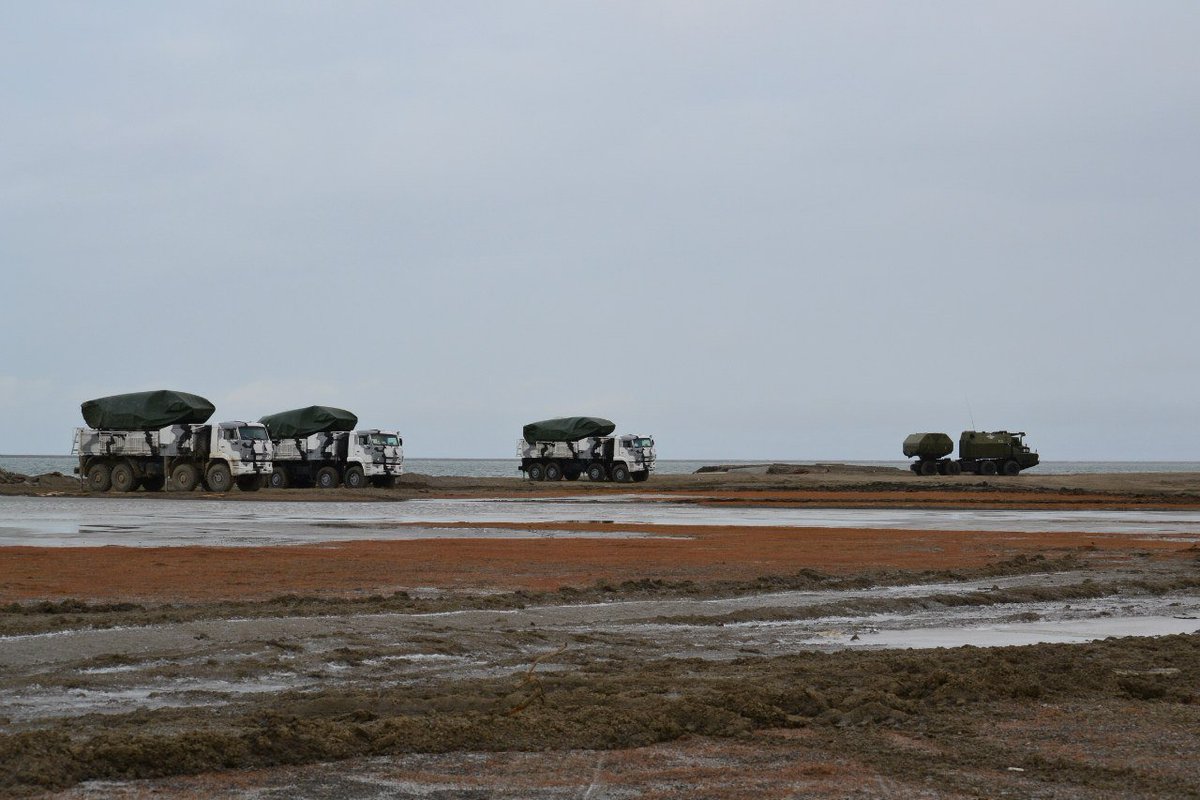 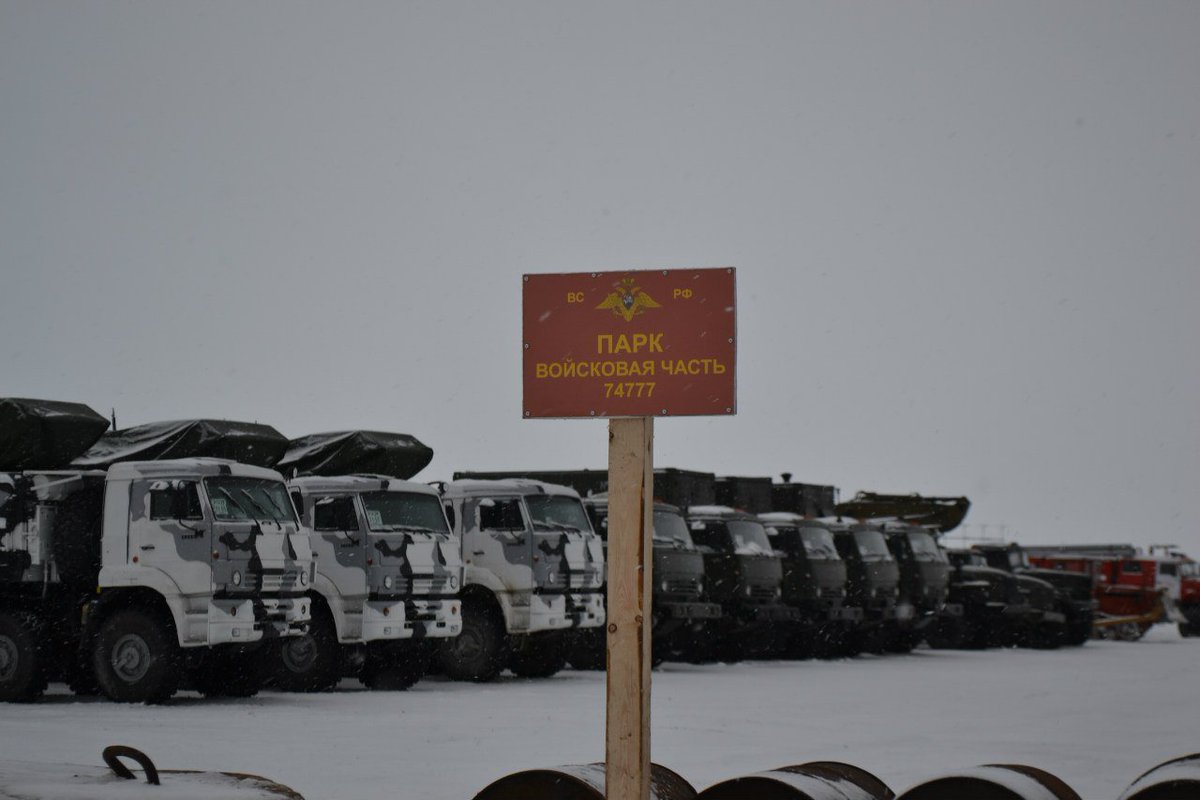 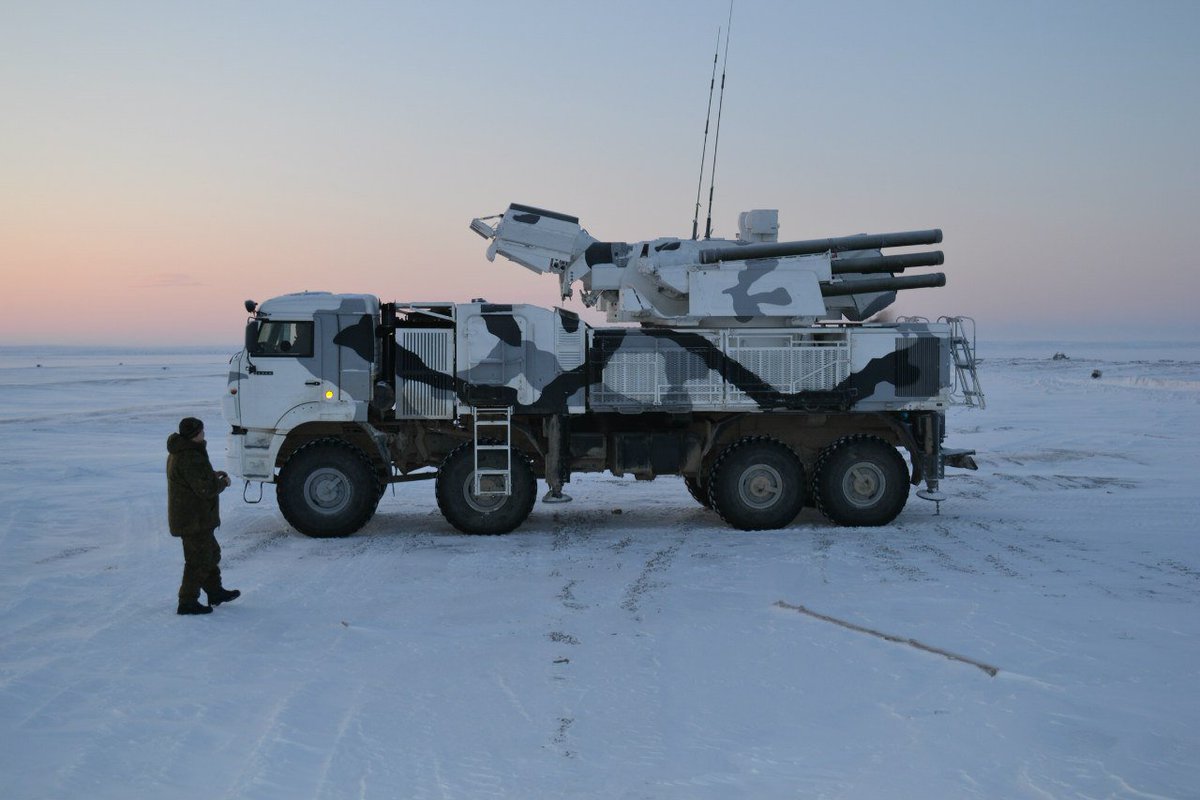 
Russia has deployed the new version of the Pantsyr air defence system to its Humaymim airbase in Syria, footage broadcast by the RT news channel on 3 February has confirmed.

Russia has had at least one Pantsyr-S1 at Humaymim since 3 October 2015, when its Ministry of Defence released a photograph showing one in the background.

The RT footage showed a second system with the new bidirectional radar now deployed at the base. This also appears to be the first time the new Pantsyr version has been seen in Russian service.

RT identified the system as a Pantsyr-S2: a new version the Russian military said it would take into service in 2015.

The version with the bidirectional radar has already been delivered to both Algeria and Iraq and was labelled as a Pantsyr-S1 when it was displayed at the MAKS show held in Russia in August 2015.

One of its selling points is that a pair can be set up with their radars orientated in opposing directions so that they can together provide 360 o target scanning coverage. However, the radar on the system seen in the footage was rotating, suggesting it is not working with a second system with the same radar.

The Pantsyr systems at Humaymim support the long-range S-400 Triumph system that Russia has deployed, there by providing close-in defence against cruise missiles and other forms of precision-guided munitions.

As yet, there has been no confirmation that the S-400 has been deployed with the new 40N6 long-range missile.

The Vladivostok air defence missile regiment received a division of the Pantsyr-S2 newest anti-aircraft missile and gun systems. The crews have passed retraining course at the Ashuluk range in the Astrakhan region.

The division is to provide air defence over the Pacific Fleet main base.

Moreover, the regiment is to receive S-400 Triumph defence systems in the second half of 2016. The crews are passing retraining course at the moment.

Deployment of S-400 Triumph defence systems in cooperation with Pantsyr-S2 newest anti-aircraft missile and gun systems will allow to provide more effective protection of the airspace over Vladivostok.

The Vladivostok air defence missile regiment received a division of the Pantsyr-S2 newest anti-aircraft missile and gun systems. The crews have passed retraining course at the Ashuluk range in the Astrakhan region.

The division is to provide air defence over the Pacific Fleet main base.

Moreover, the regiment is to receive S-400 Triumph defence systems in the second half of 2016. The crews are passing retraining course at the moment.

Deployment of S-400 Triumph defence systems in cooperation with Pantsyr-S2 newest anti-aircraft missile and gun systems will allow to provide more effective protection of the airspace over Vladivostok.

During the exercises "Pantsir-S2" destroyed the small-size air targets, which played the role of light-personnel mines

"As part of the integrated classes two ZRPK "Pantsir-S2" made a 250-kilometer march to Sergeyevsky landfill, where they participated in a comprehensive training units fire control Fifth Army. Also, training was attended by two motorized infantry divisions, one of which played the role of the aggressor, and the second - the defending side, "- he said.

Martov said that during the exercise "Pantsir-S2" destroyed the small-size air targets, which played the role of light-personnel mines. The maneuvers involved more than one thousand soldiers.

"Pantsir-S2" is a modernized Russian self-propelled land-based complex. It is intended to cover the near-civil and military facilities, including air defense systems of long-range attack from the air.

Calculations ZRPK mastered the technique on Ashuluk range, after which the "Pantsir-S2" atonement for combat duty. Complexes will cover the sky over Vladivostok, the main base of the Pacific Fleet.

In the 8th issue of the magazine "Auto Review" for 2016 published the article is interesting Fedor Lapshin "Day of anti-aircraft gunners," in which the author describes his impressions of ZRPK "Pantsyr-S" of the Russian army. Our blog introduces extracts from these material readers.

So, the author notes that most likely he was shown ZRPK modification "A2", which differs in radar and weapons, but the Russian Ministry of Defense complex called "Pantsyr-S" without a digital index. 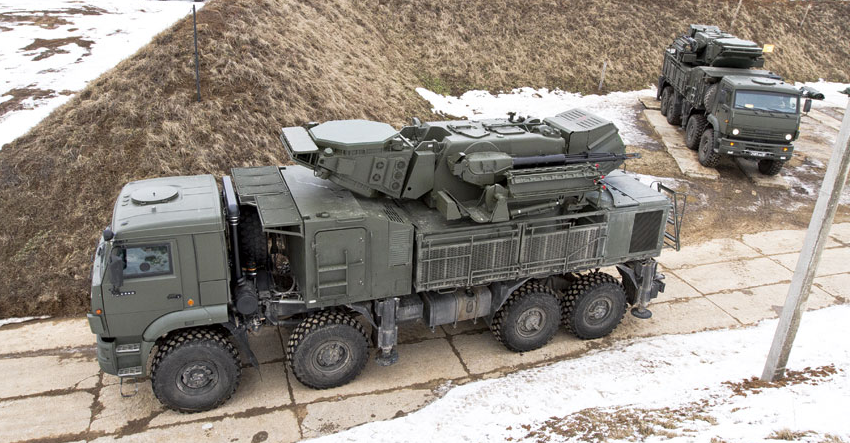 Assessing the machine itself, the author notes that although the cabin looks from the inside as usual, it is applied to a hidden book, bullet-proof glass, and built into the side slits. Judging by the brand on the windows, armored company engaged in "Asteys" from Naberezhnye Chelny, and everything turned out gently.
What's unusual? Short stick - "automatic" between the seats instead of the usual lever. On the basis of his firm ZF emblem (placed in Germany on military and armored vehicles Boxer MAN trucks), near - the electronic "brains" of the box with the logo of Bosch and «Made in Germany» inscription. Moreover, this model KAMAZ-6560, there are bridges Madara Bulgarian and German-Austrian razdatka ZF Steyr. The reality is that for such a lifting gear in KAMAZ yet its bridges. 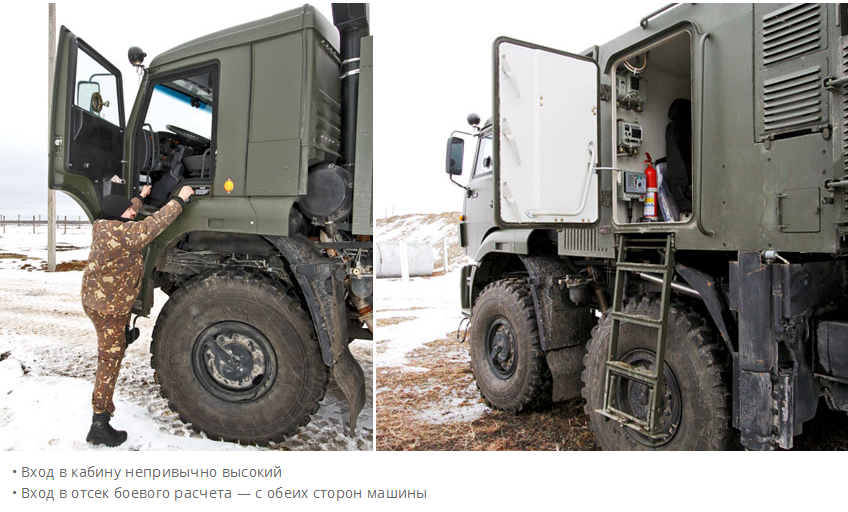 In the cockpit, another strange detail: "blower" air conditioner on the ceiling. And the rest - as KAMAZ KAMAZ.
then the gas pedal not only floor, but it is very tight, but thanks to this multi-ton machine of accelerated smoothly. Impressed turning radius - 17 meters, and in one place in order to steer, had to take back. However, the translation of the selector in "Drive" mode the truck did not go. According to the warrant officer-instructor had to squeeze the brake to go into neutral and switch back, because sometimes a box "tupit".

Pricking up another point. Since the drive is full, the author moved to the road of concrete slabs directly on the field - frozen and small clumps. But the instructor was nervous, "Look to the wheel in the hole did not get." It turned out to be very careful because the center of gravity, if you do not calculate, you can roll over.
What is the fuel consumption? According to the author - 65 liters per 100 km. 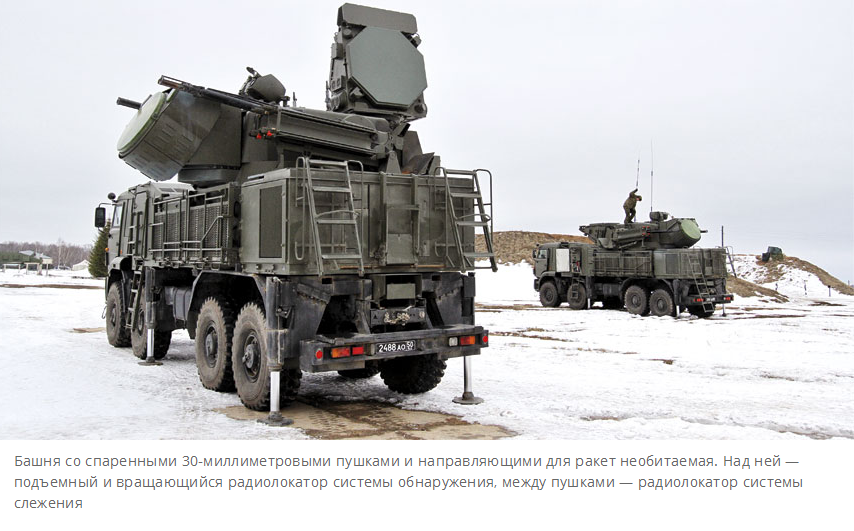 Having learned that the author of the motoring magazine, revived anti-aircraft gunners themselves invited to take pictures with the camera "shoals" KAMAZ chassis. Firstly, in the right front wheel arch - tubes, hoses and other elements of the pneumatic system, which are flying stones and dirt. Secondly, even earlier in the article about the author experienced KAMAZ-6560 spoke about the fact that the swap hoses wheels almost touching the rear wheels. In serial KAMAZ-6560, these tubes in a metal sheath is not "almost", and on tires.

Have KAMAZ-6560 is another serious problem, which was discovered by accident. This machinery equipment KAMAZ-6560, 65224, 65221, 65222 bridges Madara, and during the operation of vehicles with them a significant number of complaints received - in 2014 and 2013. 45 and 74, respectively. Earlier, it was decided to organize the production of its own design of bridges, and the estimated production volume was 16 thousand units per year, the beginning of the installation of equipment -. The third quarter of 2017. . The project cost 1.7 billion rubles, the subsidy (from the Industrial Development Fund) - 228 million rubles. But, apparently, it means it has not been allocated.

However, the production of 12-liter engines Liebherr KAMAZ need more - 5 billion rubles, of which the grant -. 1 billion rubles. But prospective KAMAZ-6560M is planned to equip Tornado license libehrovskimi motors. 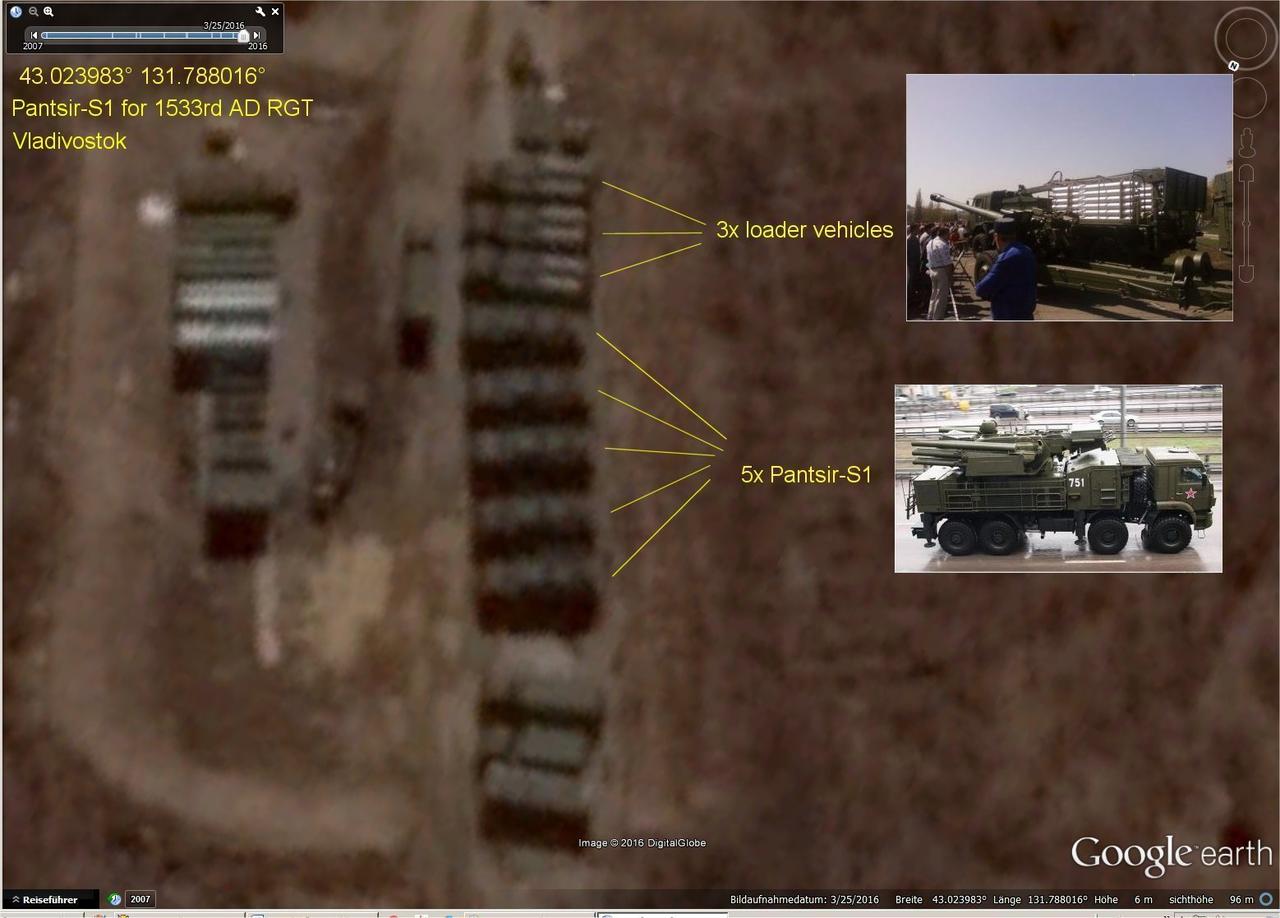 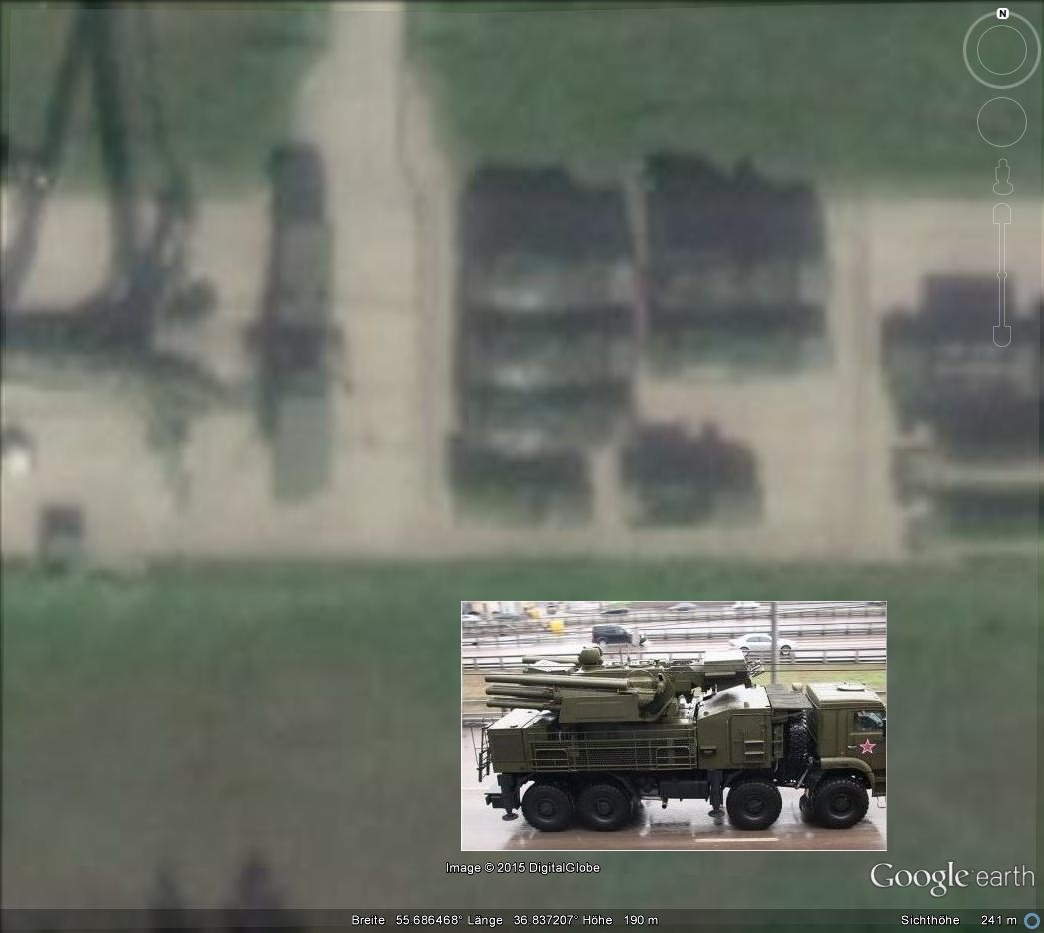 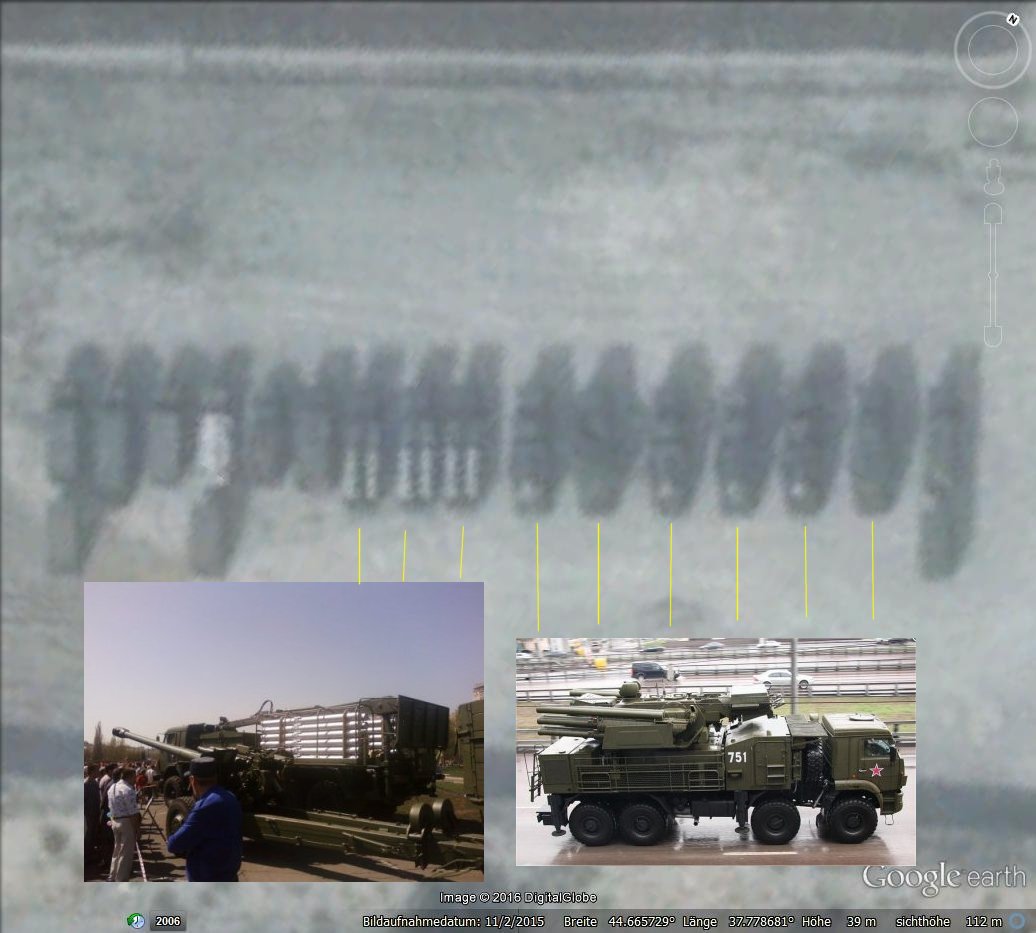 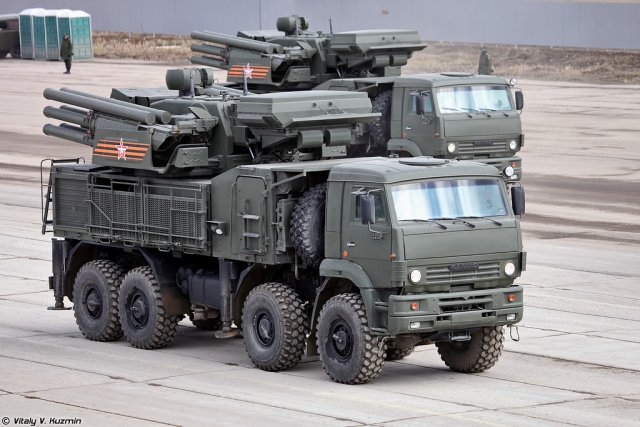 The Pantsir air defense system (pictured here during a military parade) will be fielded in its arctic version at the end of 2016 (Photo Vitaly Kuzmin)
"This year, the development work will have been completed and the advanced Pantsyr-SA air defense missile/gun system designed for the arctic environment will have started fielding with the RusAF and [Russian Navy’s] Northern Fleet," he said.

Now, the Pantsir-S and Pantsir-S2 systems are entering service, according to Gumyonny. "We are finalizing the development, and the latest short-range air defense missile/gun system, the Pantsir-SM, will enter our inventory soon," he said.

Now that this, and the Tor-M2DT (arctic variant of Tor-M2) is nearing service entry, protection of the Northern Fleet's S-300/S-400 or other key assets will be bolstered greatly, plus both current and future arctic brigades can get decent air defense equipment too.

Well, I think that I also add my thoughts to this article's statements:

First, l'm sure that most current Pantsir-S1 systems will be refitted with the "Janus" bidirectional radar of the Pantsir-S2.

Second. I have seen some images in this thread referring to a Pantsir-S2 system(also fitted with Janus radar) mounted on a tracked chassis. I think that was it.

Third and last. Pantsir-SM??? I think that this is it: 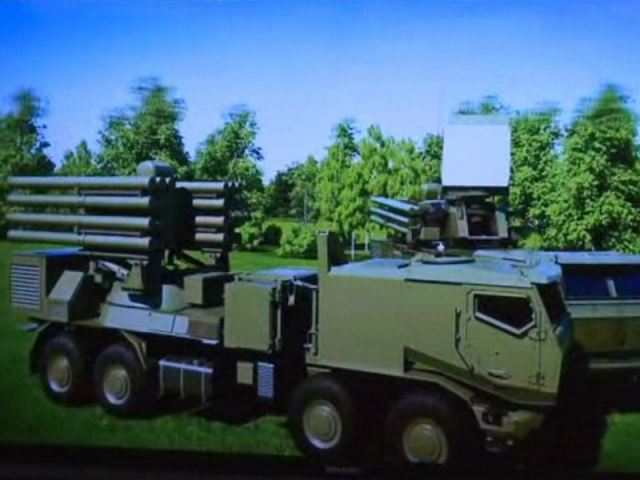 This system has two vehicles, one with a regular Pantsir system with both missiles and autocannons, and one with double load of missiles and without cannons
medo

The range of fire of the current system Pantsir-S1 is about 20 kilometers, while the next generation, Pantsir-SM can hit targets 40 kilometers away

TULA, October 6. /TASS/. The upgraded Pantsir-SM combined surface-to-air missile and anti-aircraft artillery weapon system, equipped with a multifunctional targeting system, will be able to destroy targets 40 kilometers away - twice the range of the current configuration, the first deputy CEO, chief designer of the Instrument Design Bureau KBP, in Tula (an affiliate of Rostec), Alexander Khomyakov, told the media.

He recalled that the range of fire of the current system Pantsir-S1 is about 20 kilometers, while the next generation, Pantsir-SM can hit targets 40 kilometers away.

The new Pantsir will be able to identify targets at a distance of 75 kilometers (in contrast to the current model’s 40-kilometer capability, Khomyakov said.

The components of a newly-developed air defense system are in the testing phase. Khomyakov said nothing about when they may be completed.

Last August the Russian Defense Ministry said that Pantsir-SM would go operational "very soon." According to earlier reports, the new system will be armed with a high-speed missile noticeably surpassing the current equivalents. There have been reports work is in progress on Pantsir’s naval and Arctic configurations.

Is that actually a new new version or just referring to Pantsir-S2?

Further up the page it mentioned Panstir-S2 was tested in February.

They could be talking about the same system...
magnumcromagnon

Prepare to feast your eyes on this, from KBP Tula plant: 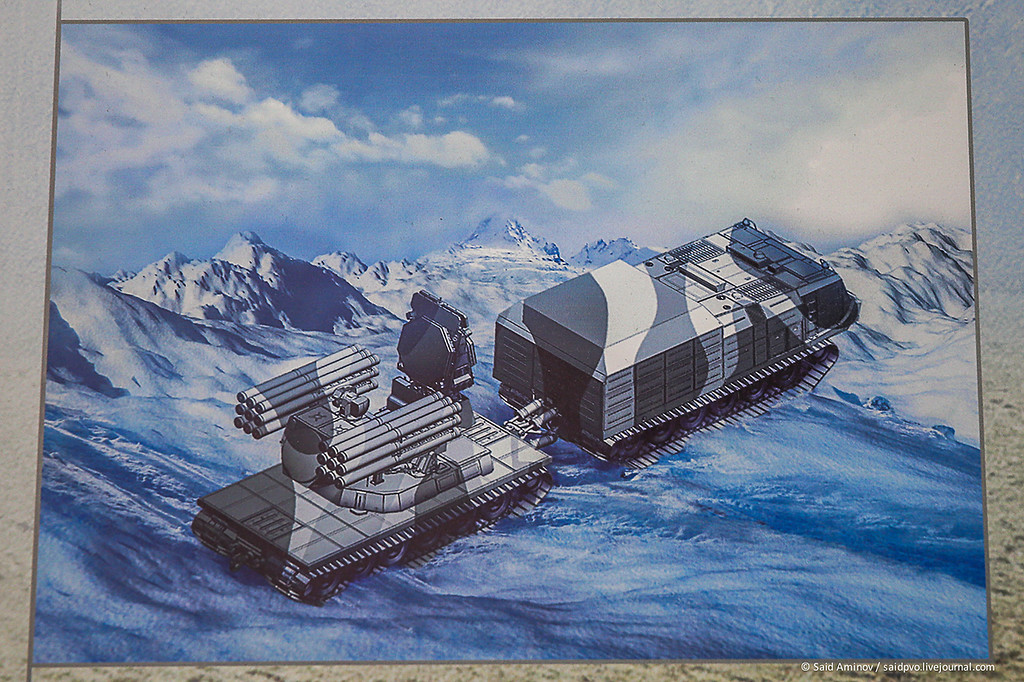 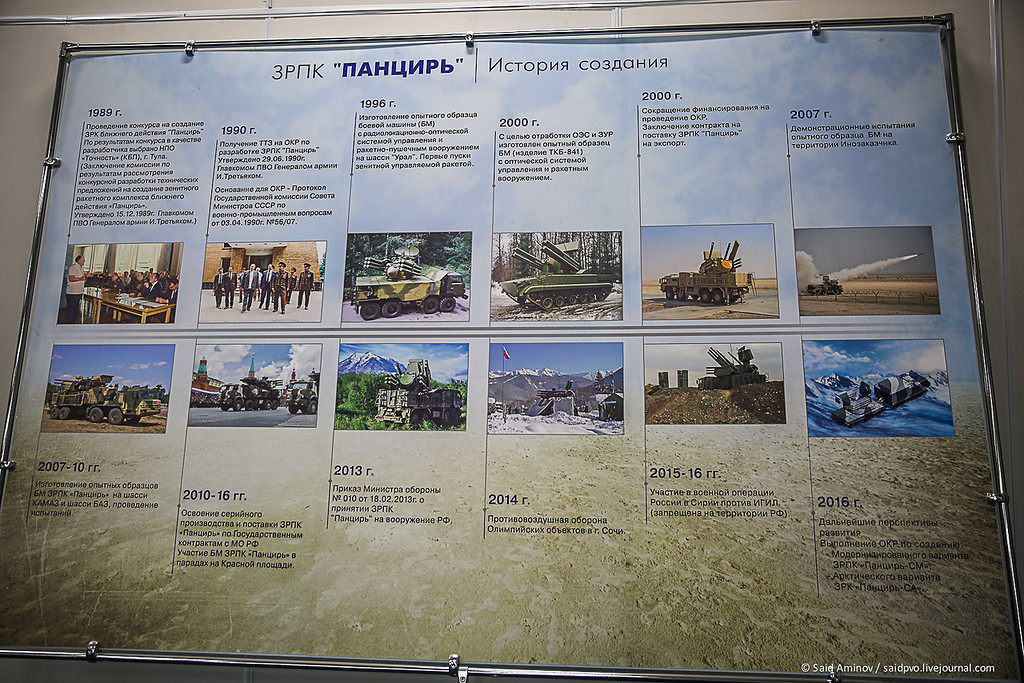 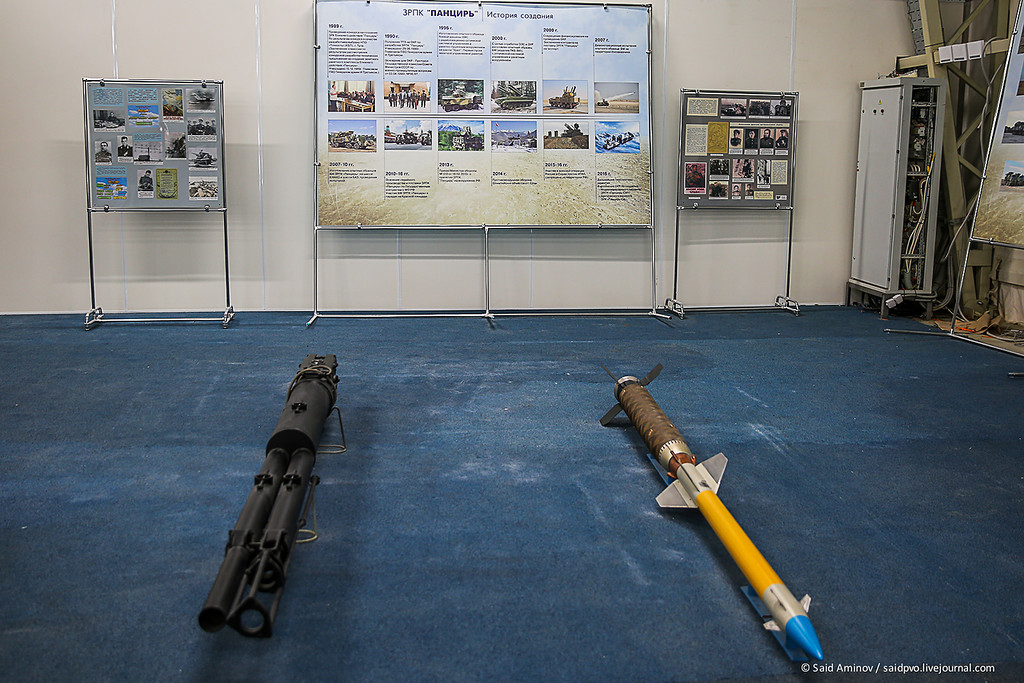 No AAA. Just missiles. Heard that tubes are longer so missiles may be 40km.

In the flat open terrain of the Arctic the guns would probably be less useful than more missiles.

I would add that likely in the near future this vehicle might operate with a similar vehicle with no missiles and a 57mm gun with a large supply of shells.
Sponsored content